A Talybont round - the long way to Cefyn yr Ystrad

I would soon be away for two weeks lazing in the Mediterranean sun – this is what the CEO likes to do – so could be a while before I got the opportunity again to get out in the hills. And it was already a couple of weeks since I’d last been out => itchy feet! There was a great forecast for the Monday 20th September – sun all day – so that’s the date I fixed on.

Weighing up the options, I eventually plumped on a wander around Talybont Reservoir that would encompass Cefn yr Ystrad, this for a variety of reasons:
1. Just two hours drive one way (at least an hour less than the Lake District);
2. It would “clear up” the one remaining Hewitt in S Wales;
3. I realised that I could change what I’d initially envisaged as a bike-and-hike to a round, taking in the hills around Talybont Reservoir, which, when I’d walked the Brecon Beacons with Dr Frank we’d seen nothing of, since we did the entire ridge in mist and rain.

our_route.gpx Open full screen  NB: Walkhighlands is not responsible for the accuracy of gpx files in users posts
I set off from home at 04.30, because I want to be on the hills as the sun rises. I know that the road up to the dam from Aber Village is pretty narrow, and I’ve no idea whether there’ll be anywhere to park; but in the event there is no issue, there being a number of unrestricted lay-bys on the dam crest itself, in one of which I park up at about 06.45. 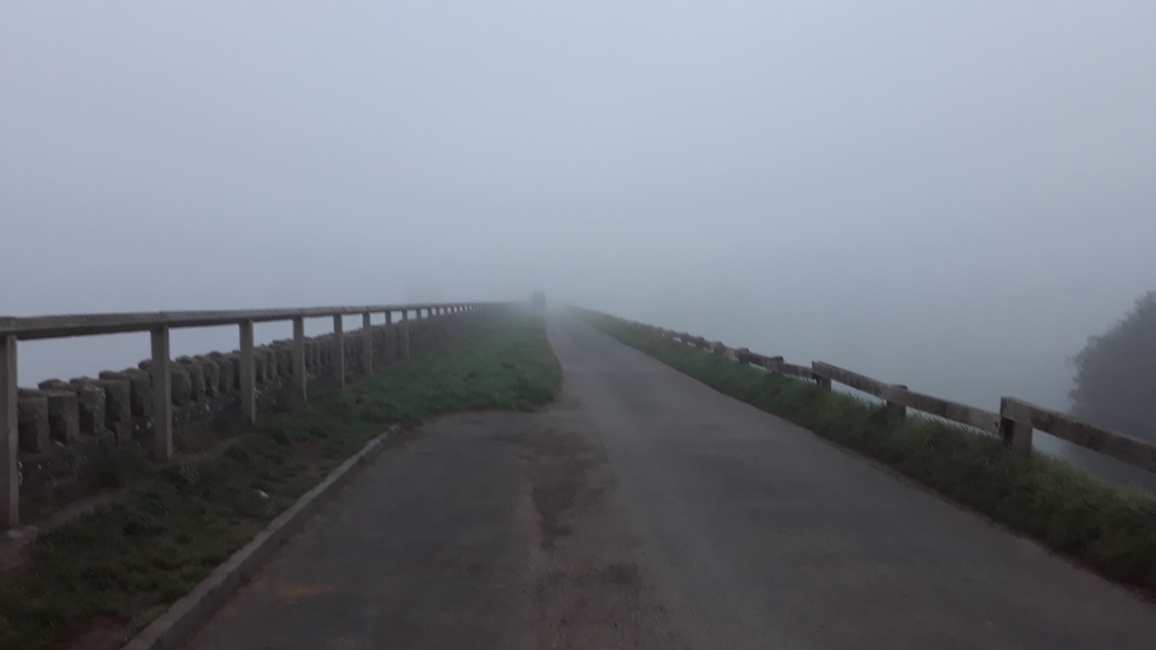 After a quick breakfast, I head off up the hillside towards my first goal, Tor y Foel – which is a fair hill in its own right, at 551m. Following a narrow path through the woods, I emerge from the mist after little over 60m of ascent…

20210920-073159-1. As I ascend, the extent of the inversion becomes clearer. This pano is looking north, with Waun Rydd visible as an elevated plateau well over on the LHS. 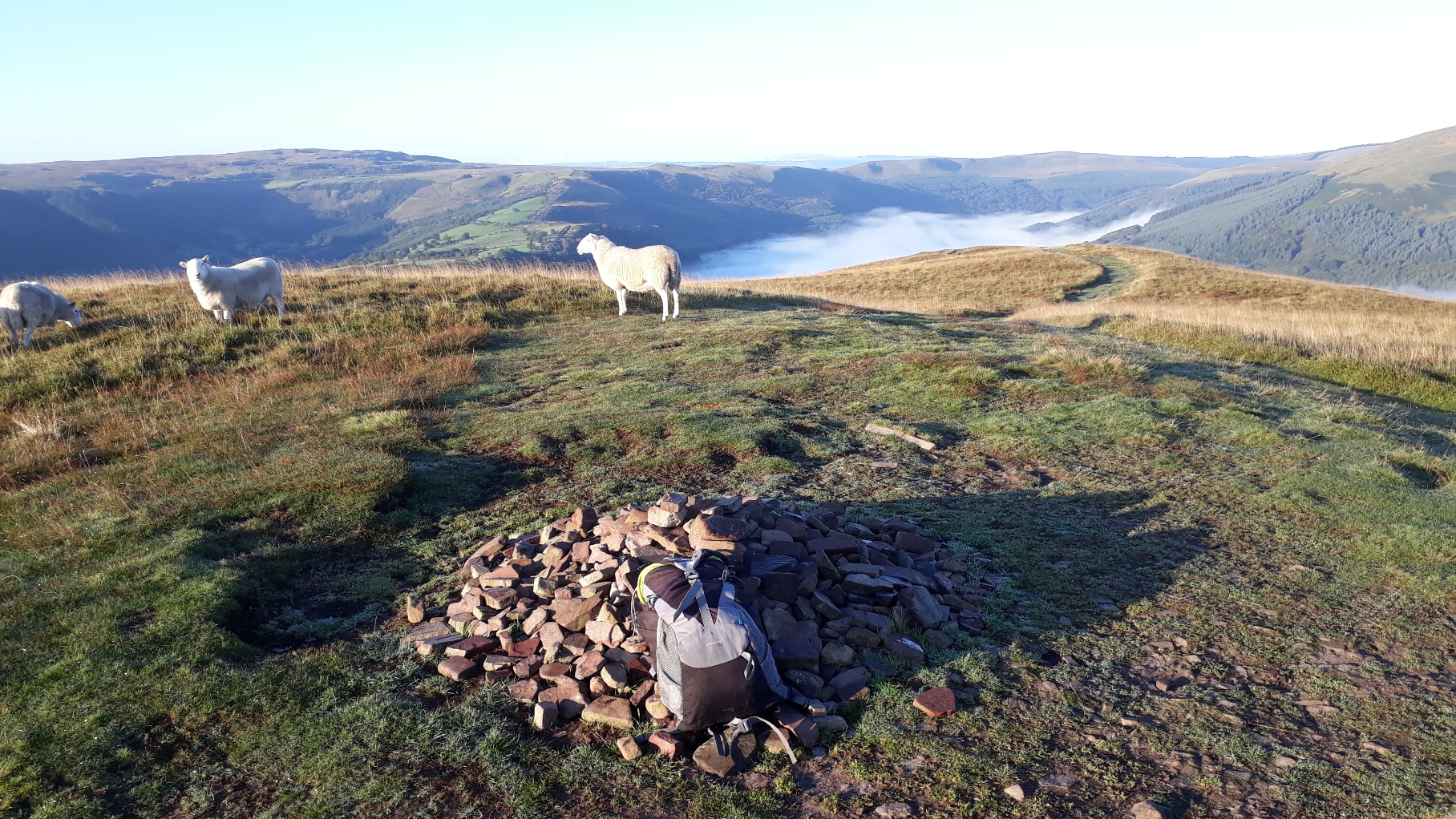 20210920-080058. And looking south west from the summit, with the Cefn yr Ystrad quarry visible on the LHS, and on the following zoomed pic. 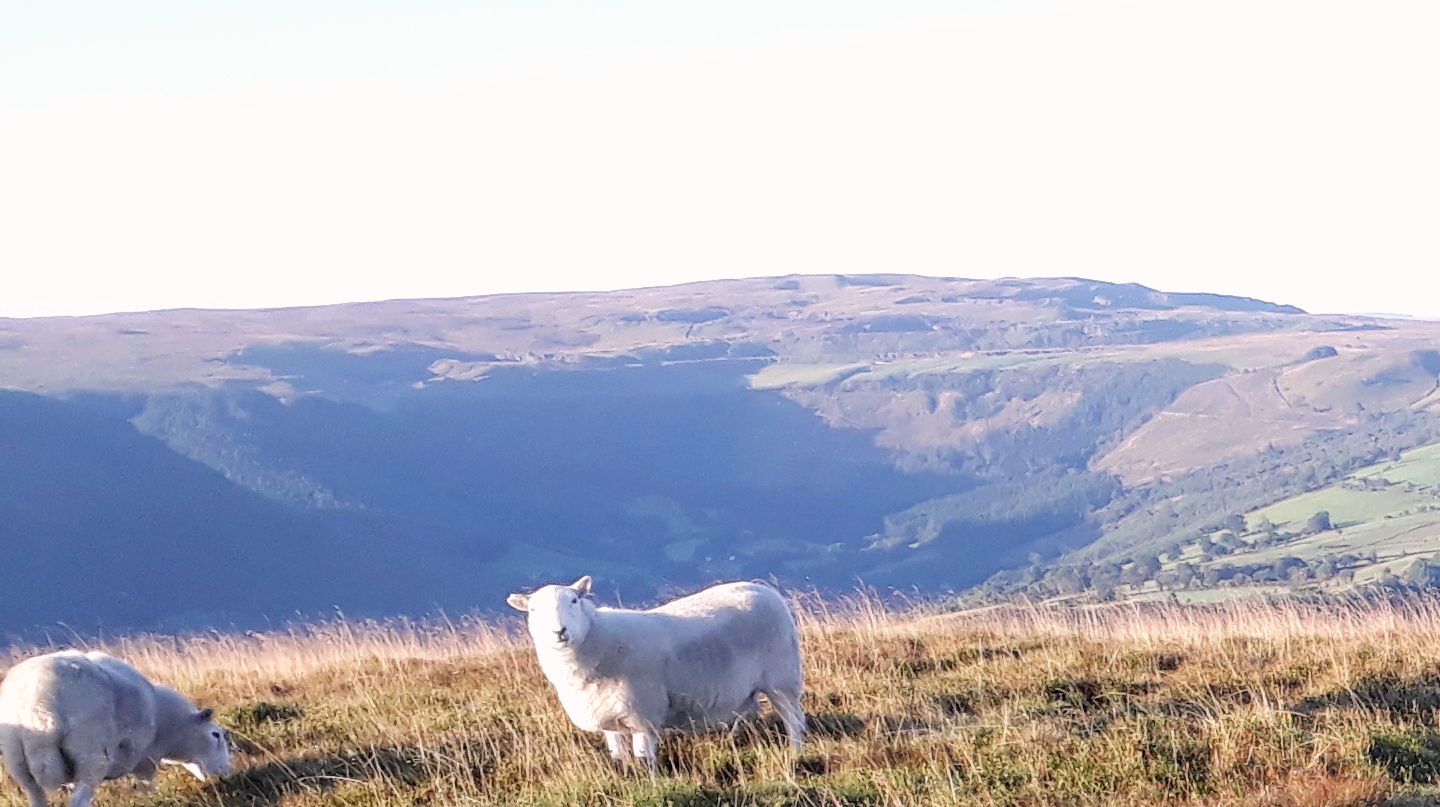 There's a wide track running broadly SW down from the summit that intercepts the Beacons Way, which is where I'm heading. From the map it looked quite appealing because it runs along the watershed for 4+km, with a fairly narrow ridge, and the contours suggest that the views will be excellent on both sides. And so they prove to be.

20210920-082555. The small hill ahead is Bryn Melyn. As the Brecons Way runs alongside it here below the actual watershed, I deviate for a few hundred metres so as to take in all the watershed.

Back down on to the Brecons Way, progress is pretty rapid. 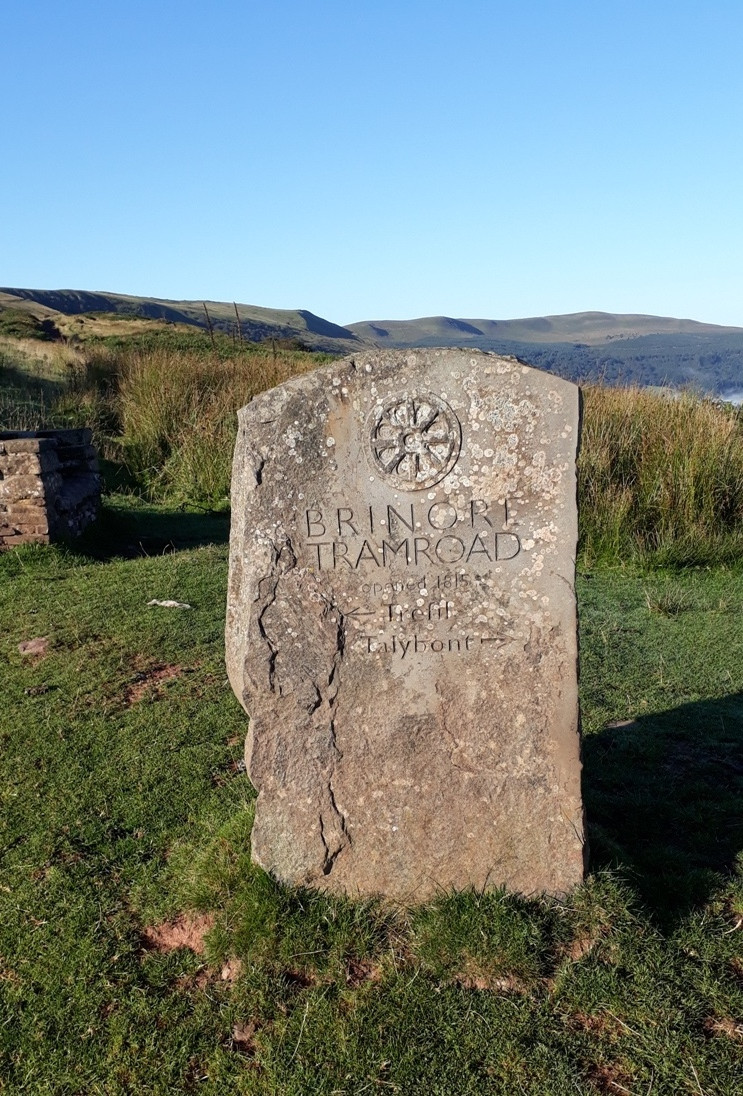 20210920-085101. A little further on I come to this sign.
Reading up about it afterwards, I find that the Brinore Tramroad runs for 8 miles (13 km) from Talybont-on-Usk to Trefil (13 km), and was operational between 1815 and 1865, linking the Tredegar iron works and Trefil limestone quarries to the Monmouth & Brecon canal at Talybont. Nowadays it's a mountain biking/walking route. 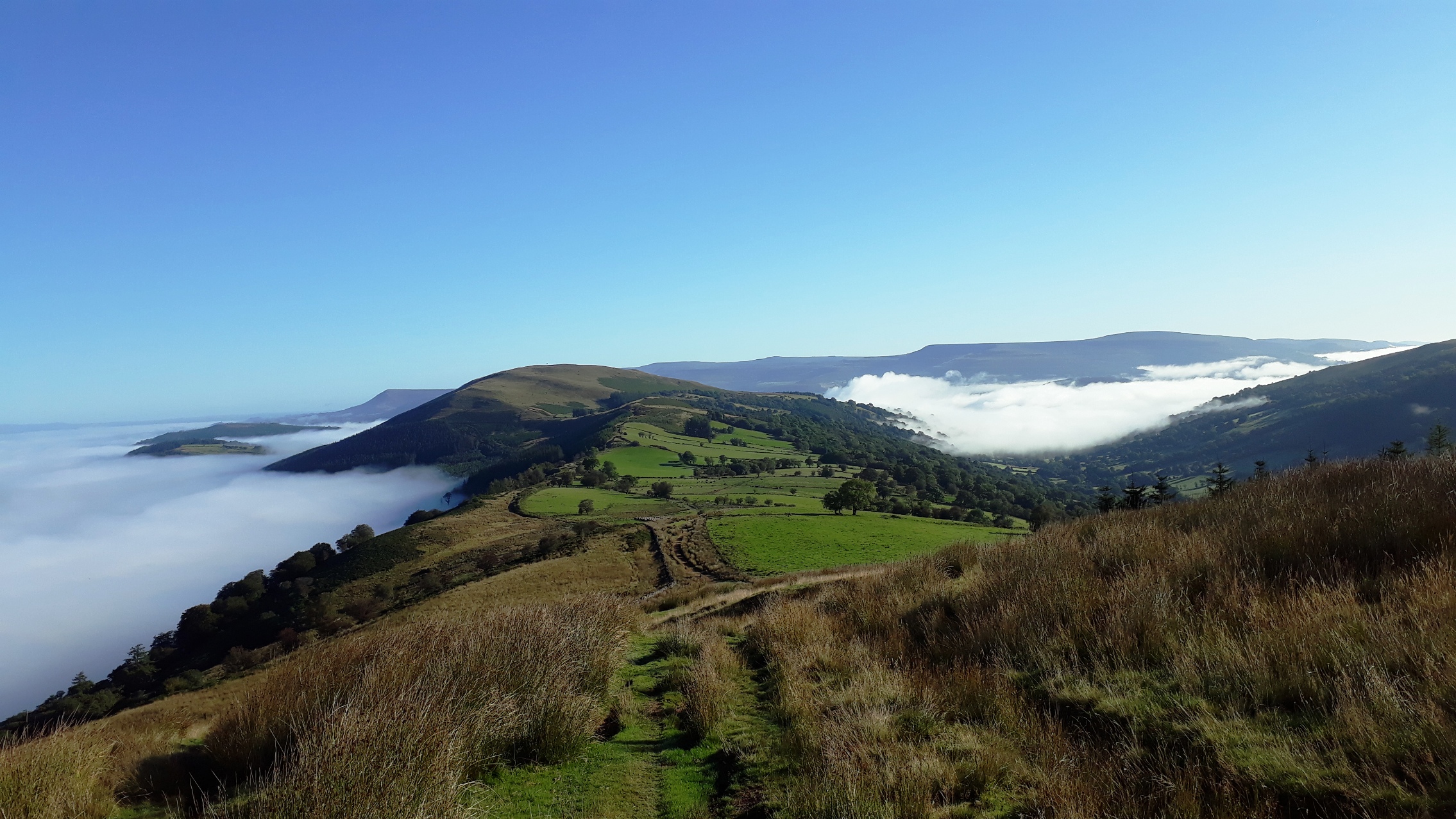 20210920-091942. And looking south, the quarry - and Cefn yr Ystrad just behind it, not to mention the rather attractive Dyffryn Crawnon valley in the foreground - are much closer now.

20210920-094534. The track continues all the way up to the boundary road of the quarry, and progress would have been even speedier had I not decided to deviate from it to yomp across the boggy turf when the track took a curve to avoid what turned out to be marshy turf land - as quite clearly shown on the map

. Still, there was a nice little herd of ponies I walked through.

Access to the disused quarry is fenced off, for obvious safety reasons, so I veered slightly to the left to follow an access track that runs around the outside of the "big hole" and brings one out to the south of the quarry works.

Approaching Cefn yr Ystrad from this side - the North - the first landmark that one sees is a small cross on a cairn (I didn't take a photo), which was erected to commemorate the deaths of six airmen in a crash in December 1940. The Wellington Bomber was returning from a bombing mission to Bordeaux, when primitive navigational equipment and terrible weather meant that instead of descending over the flat land of Norfolk, they headed towards the Brecon Beacons - quite a comment on the difficulties of navigating in those times! The aircraft caught the rocky outcrop of Cefn yr Ystrad just north of Trefil in the early hours of the morning, and there were no survivors. Apparently one of some 40 air crashes in the Brecon Beacons.... 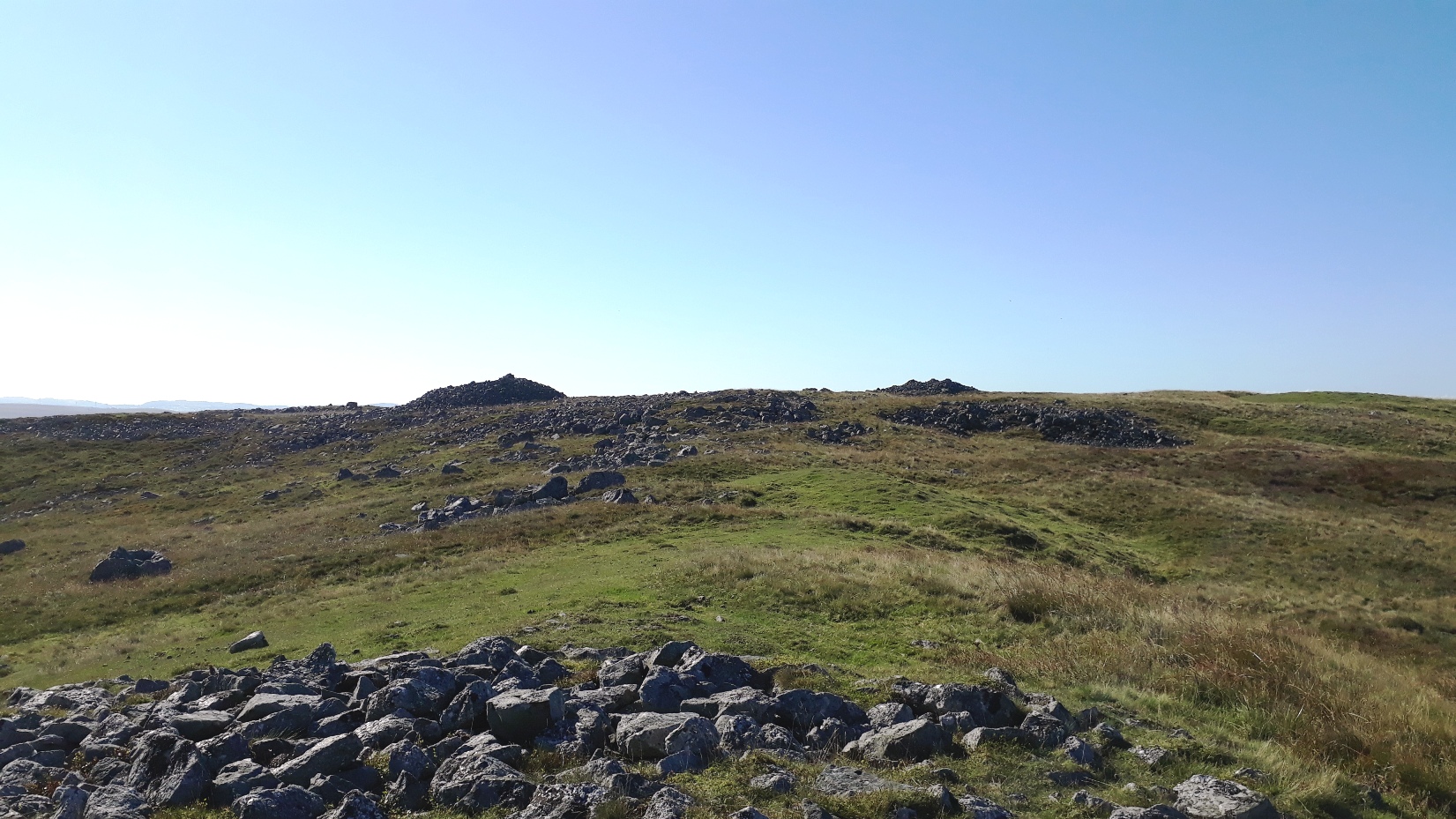 20210920-102517. The next landmarks that appear are the Bronze Age burial cairns of Carn Felon (LHS) and Carn y Bugail (RHS). Both are pretty substantial, and have a hole in the centre as if folk have removed stones looking for buried treasure - according to the Ancient Monuments website, the cairns "...retain significant archaeological potential, with a strong probability of the presence of both intact burial or ritual deposits..." 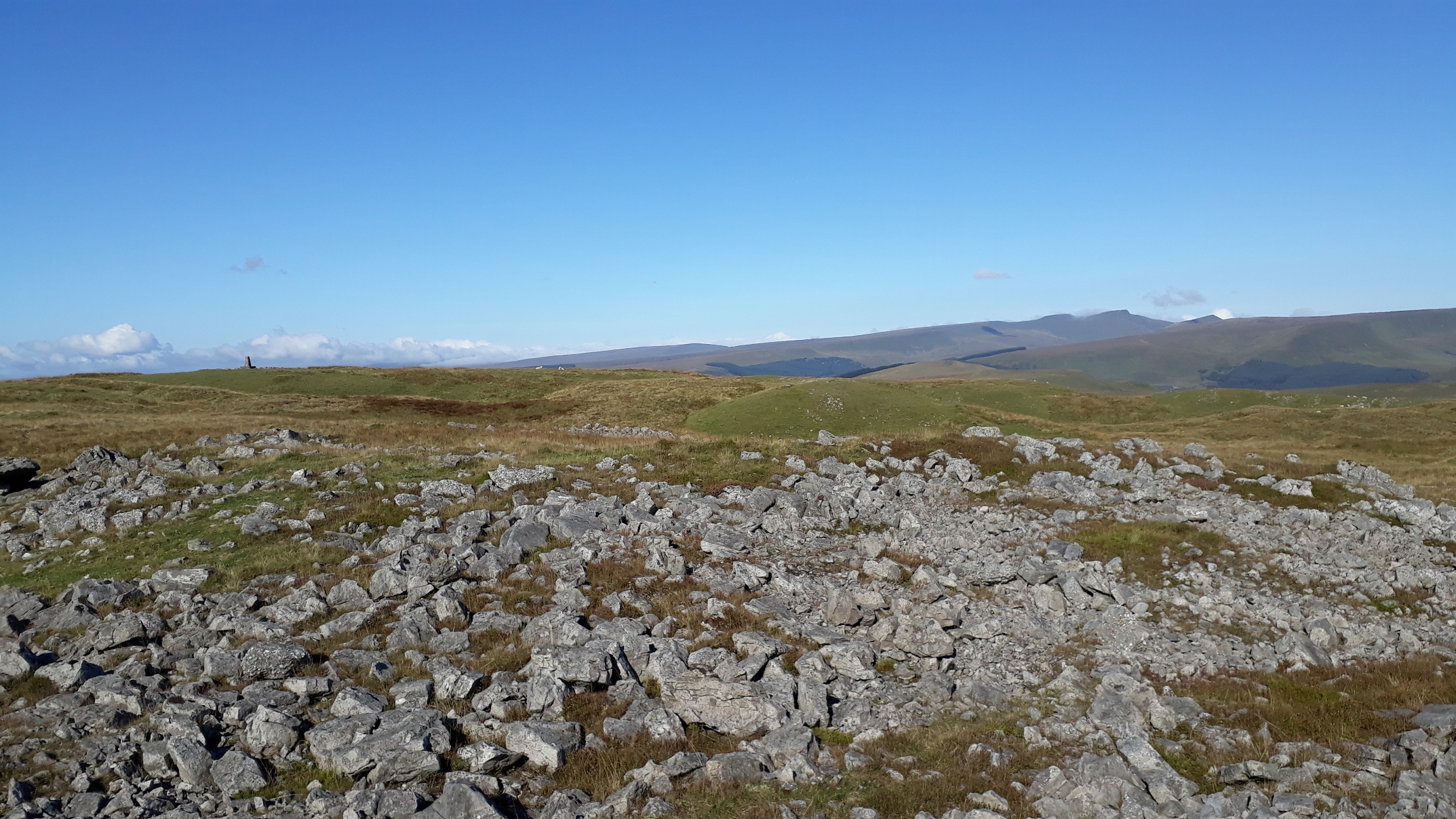 I take a ten minute or so rest in the sunshine and just enjoy the splendid vistas and silent solitude. Then I head off towards the west end of the quarry - ie continuing my clockwise route around it. It turns out to be quite a distance to the end of the "big hole" at least a kilometre. Pasts the end, I walk back east on the big track that runs just to the North of the quarry for about a kilometre, before bearing off across rough ground to the North, aiming for what I think must be a continuation of the Beacons Way - pretty rough and quite slow going. But I hit my target, a broad track...

20210920-113106. This pic is looking south from the track back towards Cefn yr Ystrad, and gives an idea of the nature of the ground covered.

), which takes me up on to the ridge where I join a very well used broad and boggy path that runs along the local watershed, and affords some good views from its highpoints. 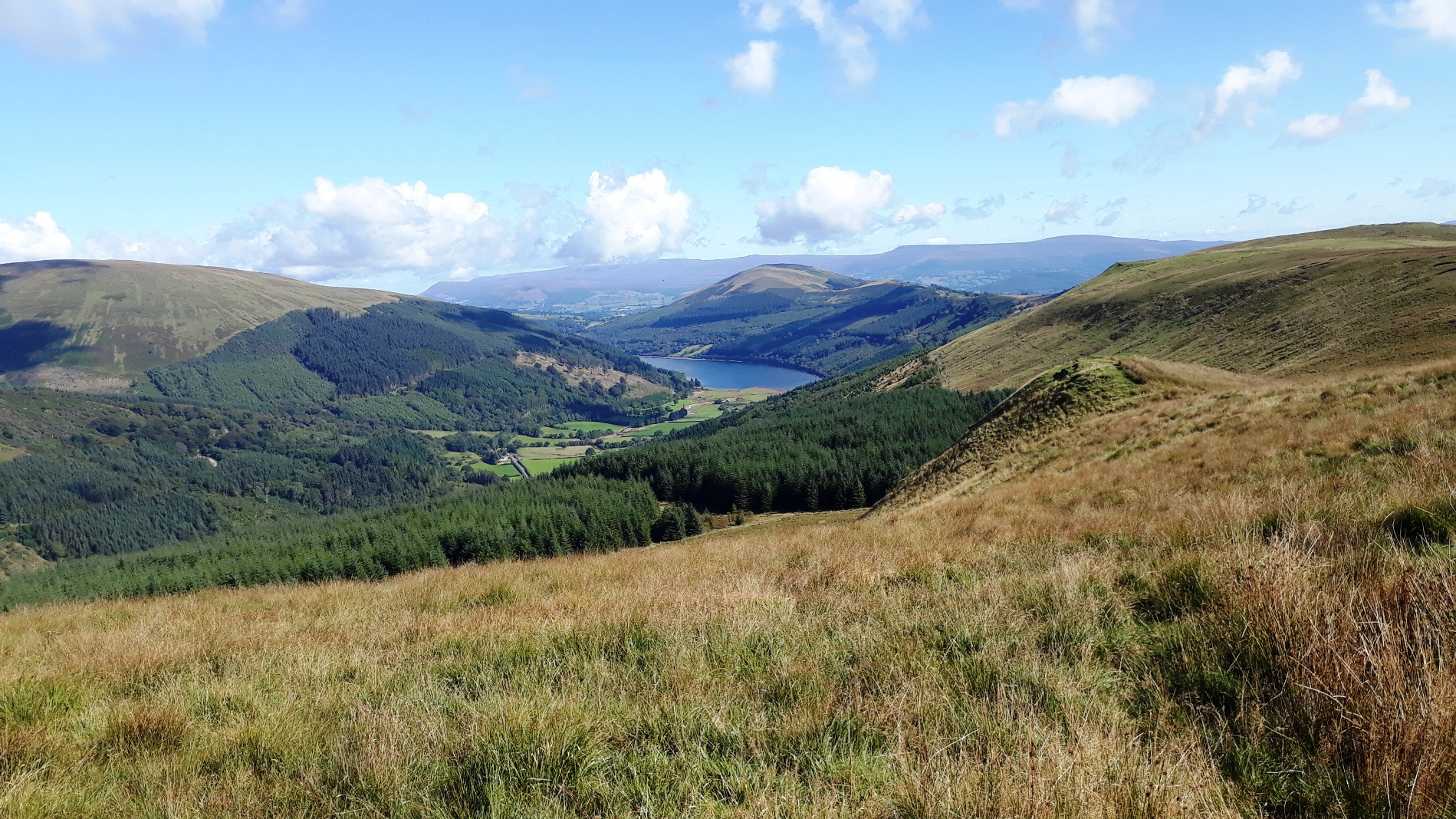 20210920-115735. ...but think how much nicer it would be if the monoculture conifer plantations were replaced by native mixed trees. There are so many areas of Wales, the Lake District and Scotland thus despoiled that I find it difficult to keep this Toby Shandian hobby horse locked in the stable whenever I see such desecration...

20210920-120453. Ahead the unnamed hill with a 565m trig point. In their (undoubtedly vain) attempts to avoid the bogs, years of walkers have extended the path to the width of a three lane motorway!

20210920-123752....taking this wide pano facing east, Talybont Reservoir showing on the RHS and Pontsticill Reservoir on the LHS, before moving on. 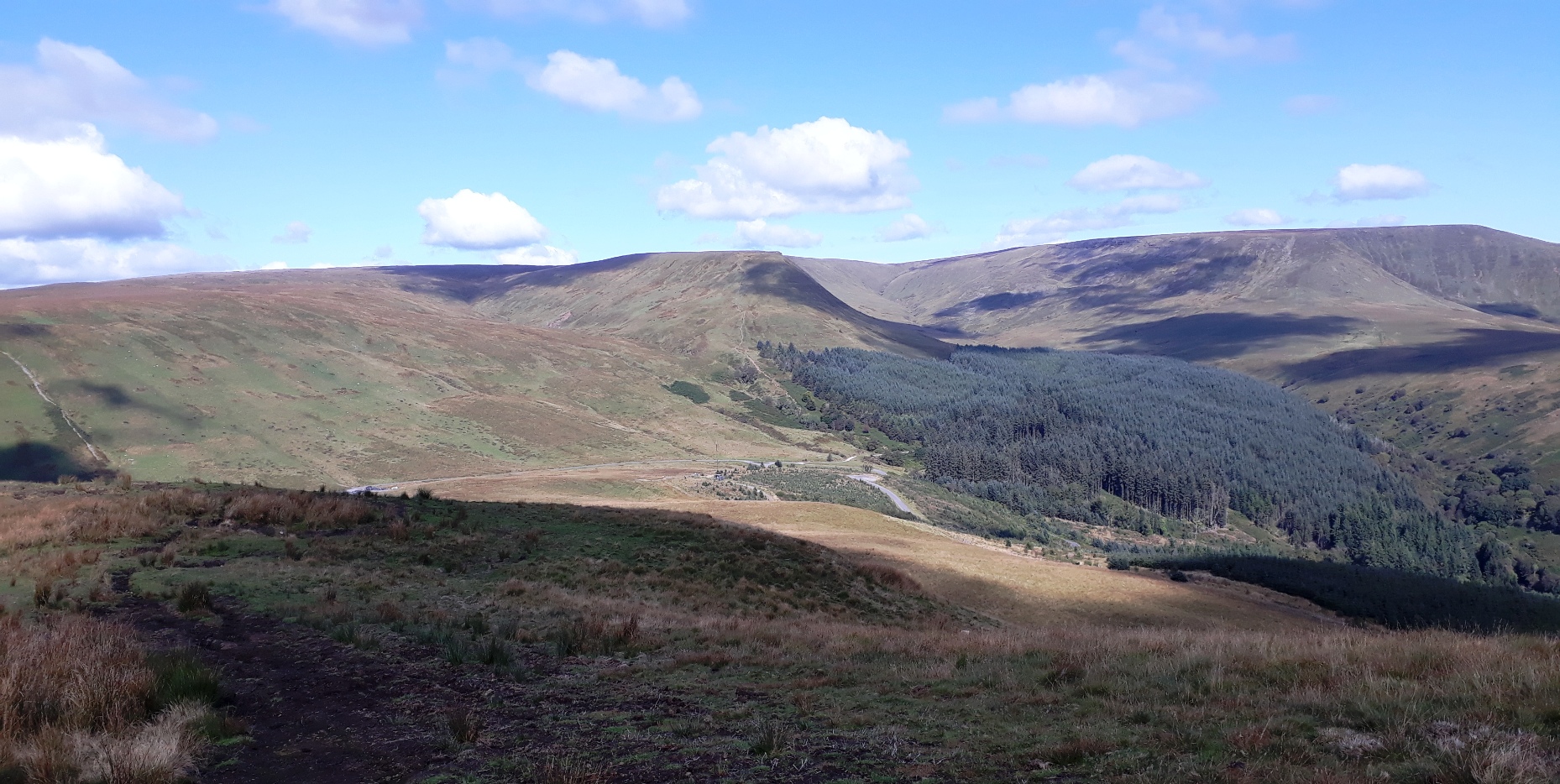 20210920-124353. Ahead just over 100 metres descent to the minor road that links the Talybont, and Pentwyn and Pontisticill Reservoirs....then the 250m ascent of Craig y Fan Ddu, again a fair old hill in its own right if it wasn't merely a top of Waun Rydd or Cribyn, which takes one up on to the Beacons ridge plateau.
Craig y Fan Ddu is roughly centre pic, Waun Rydd the slightly higher area on the RHS. I've censored my thoughts on the great swathe of coniferous monoculture - I leave any reader to imagine them, and invite them to add their own 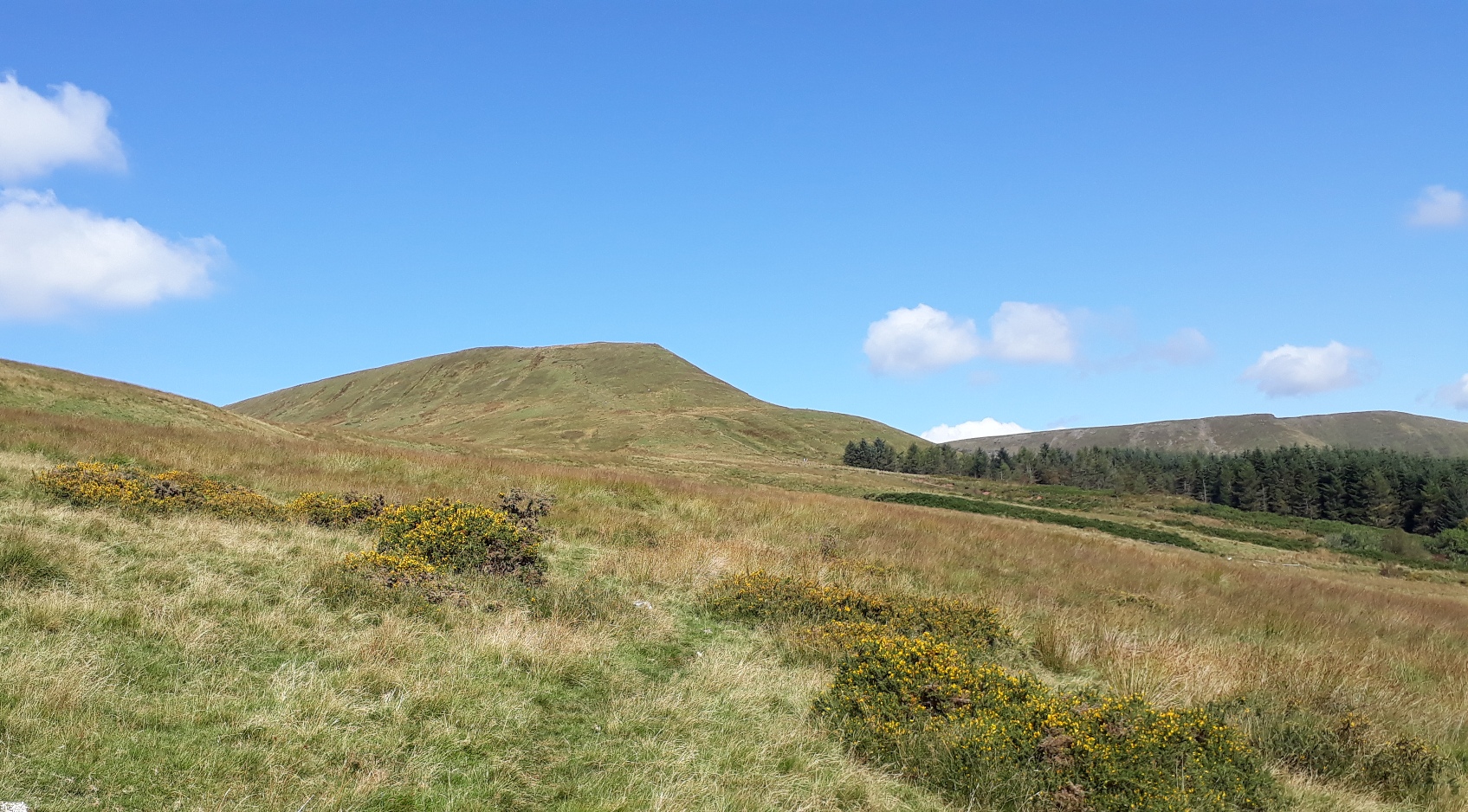 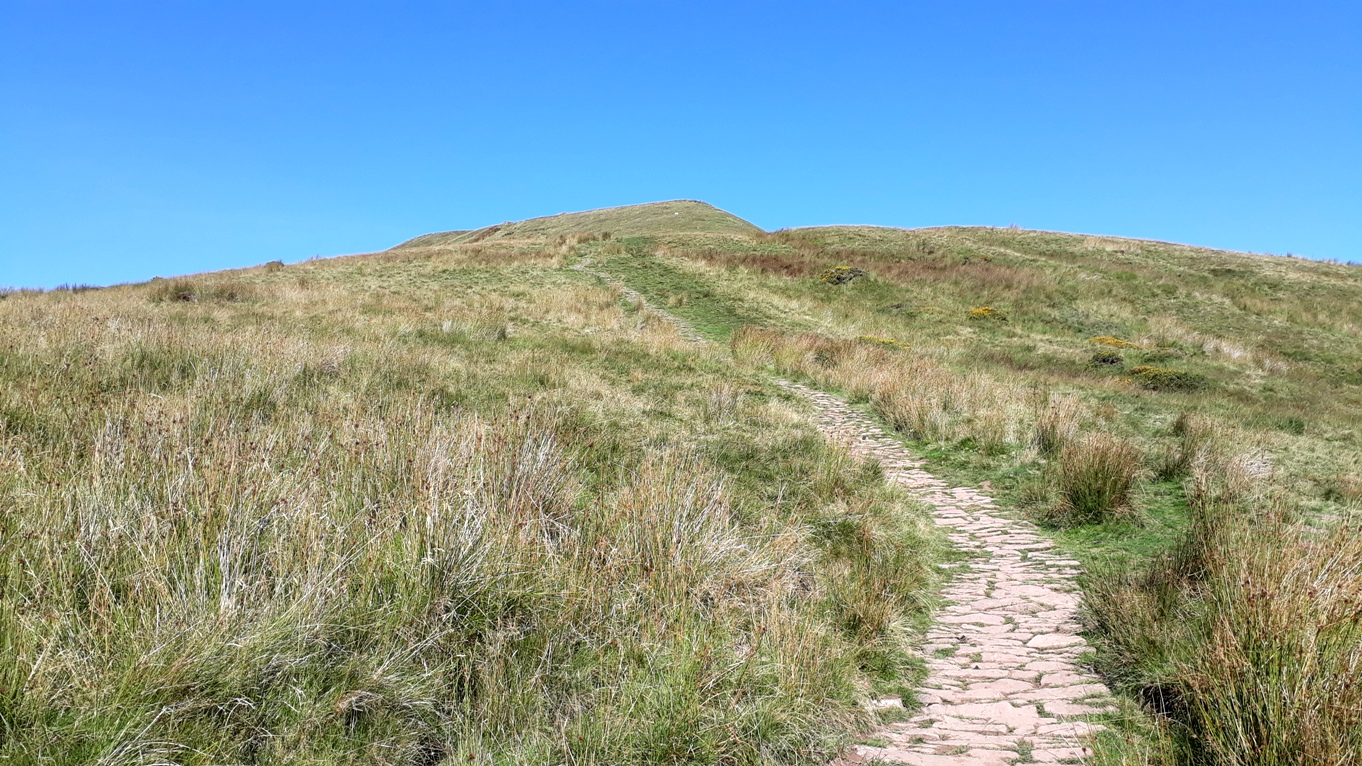 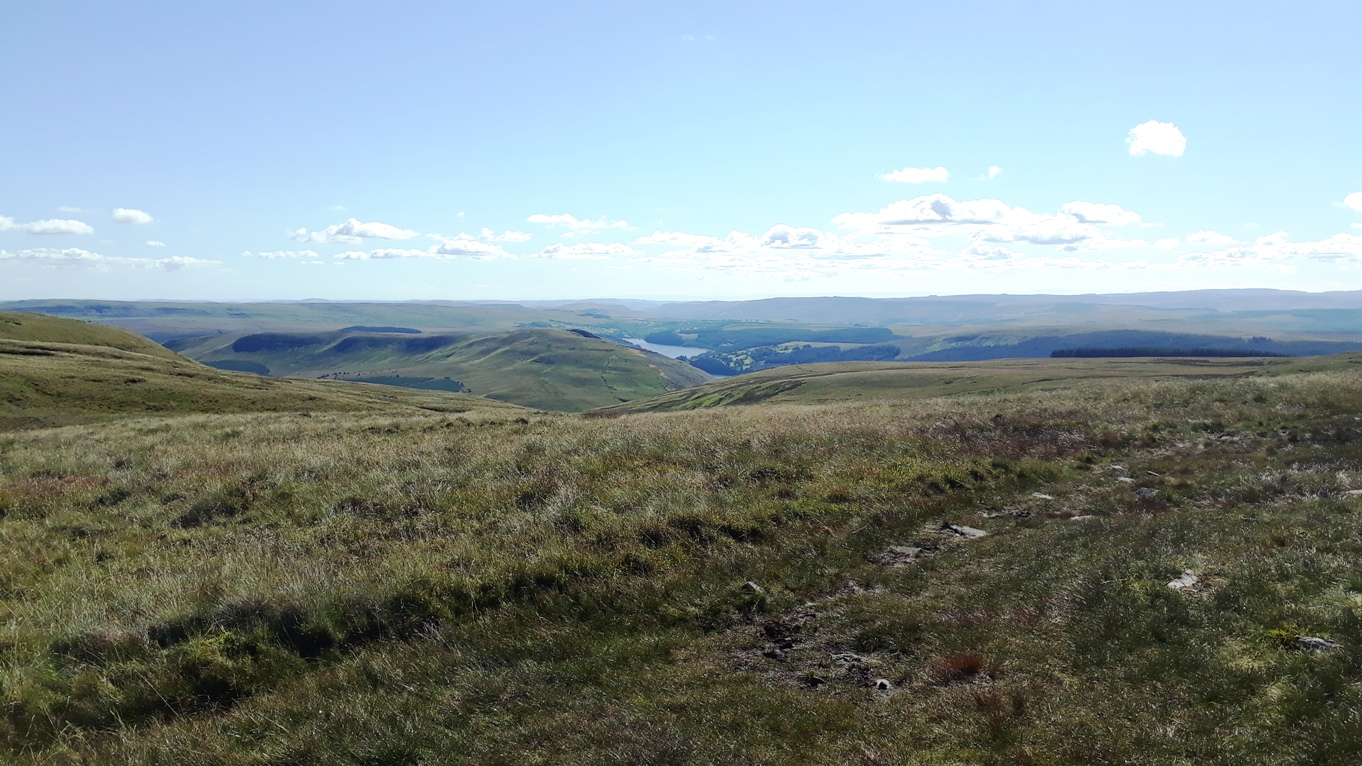 20210920-140132. Just beyond the high point of Craig y Fan Ddu, the Beacons Way turns sharply left. From here, looking south, I can see both Pentwyn and Pontisticill Reservoirs for the first time. The path runs south west for a few hundred metres before it again turns sharply at a cairn, this time to the right, and after just under a kilometre... 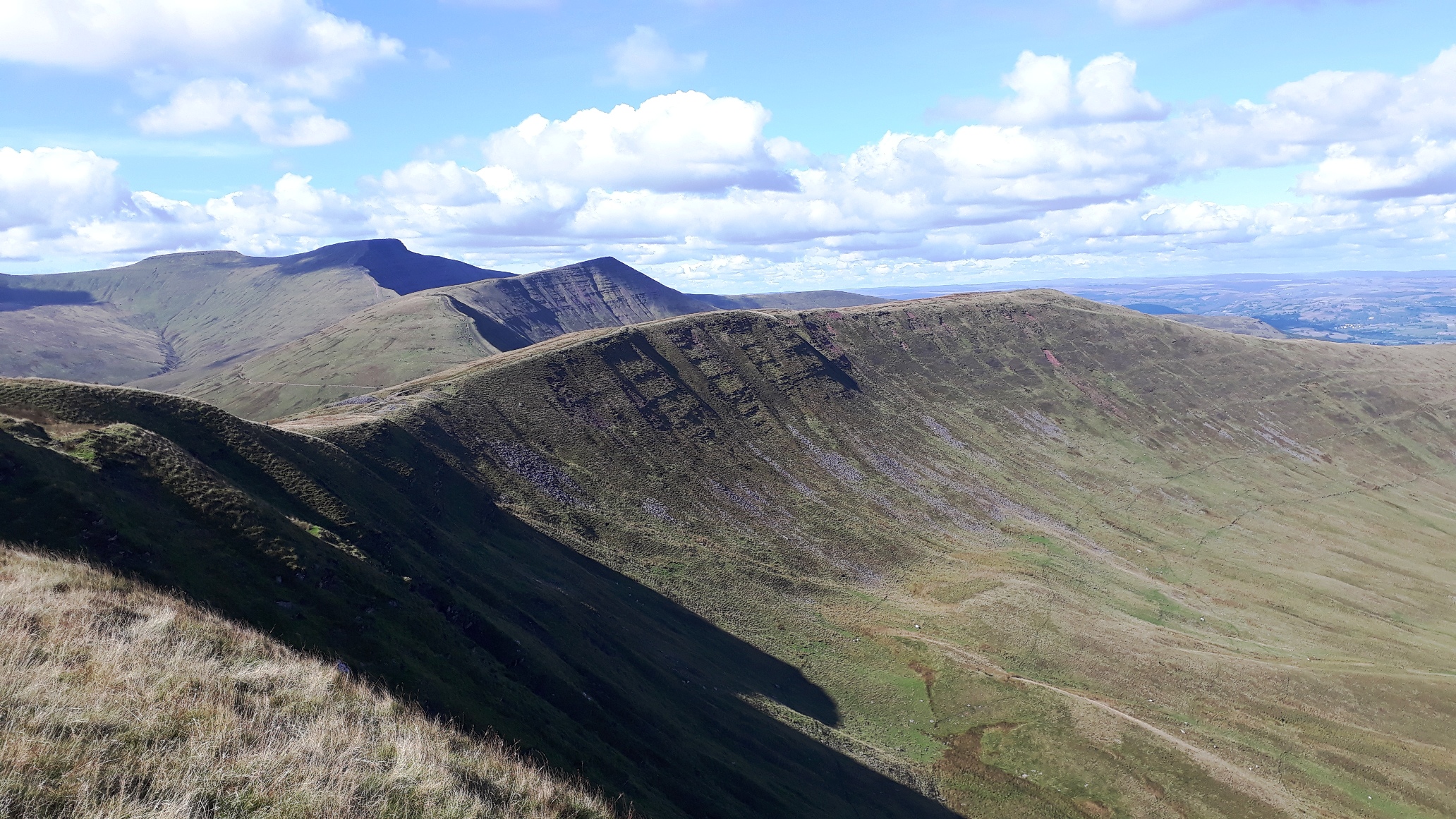 20210920-142059. ...meets the top of the Beacons scarp slope, and the 730m spot height. What a stunning view of the Brecons biggies! I sit down and enjoy for a while the view that I missed the first time I walked this ridge. 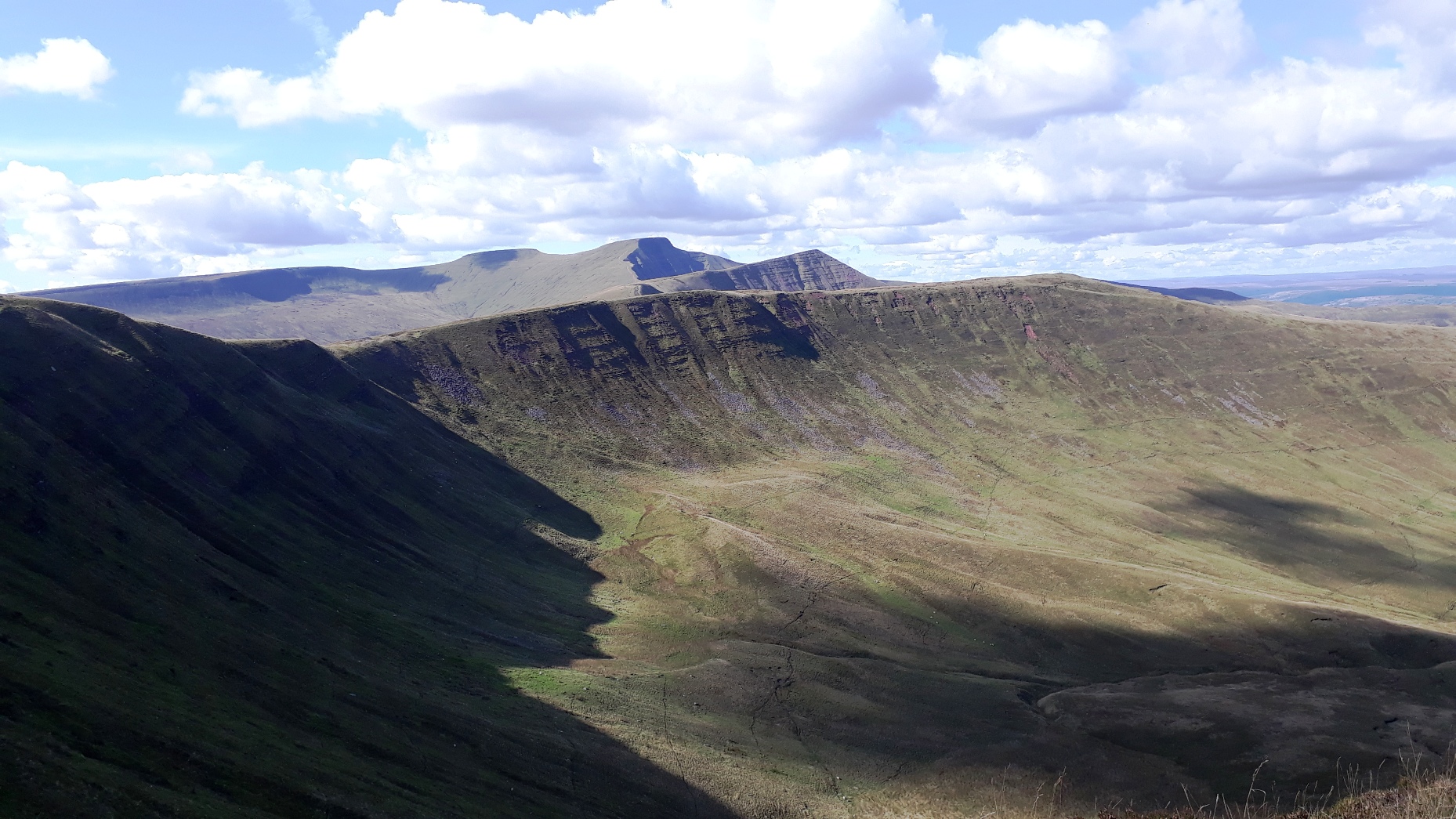 20210920-143349. A little bit further along the ridge, looking along the escarpment again (fear not - I've only put a couple of the dozen or so pics of this that I took into this report 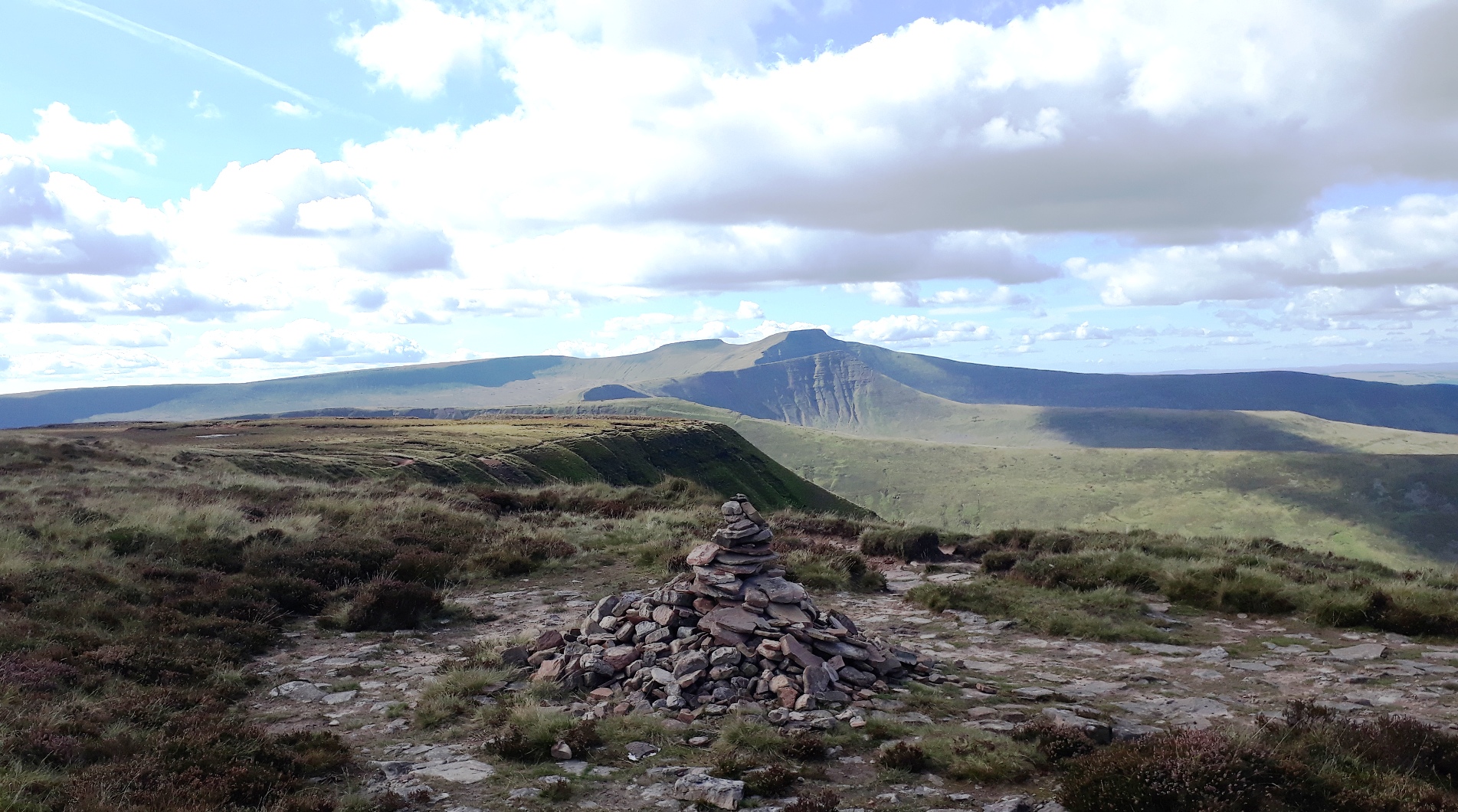 20210920-145950. I then peel off right just beyond the cairn to follow the path that passes a hundred metres or so south of Waun Rydd (the high point at the right hand edge of the pic)... 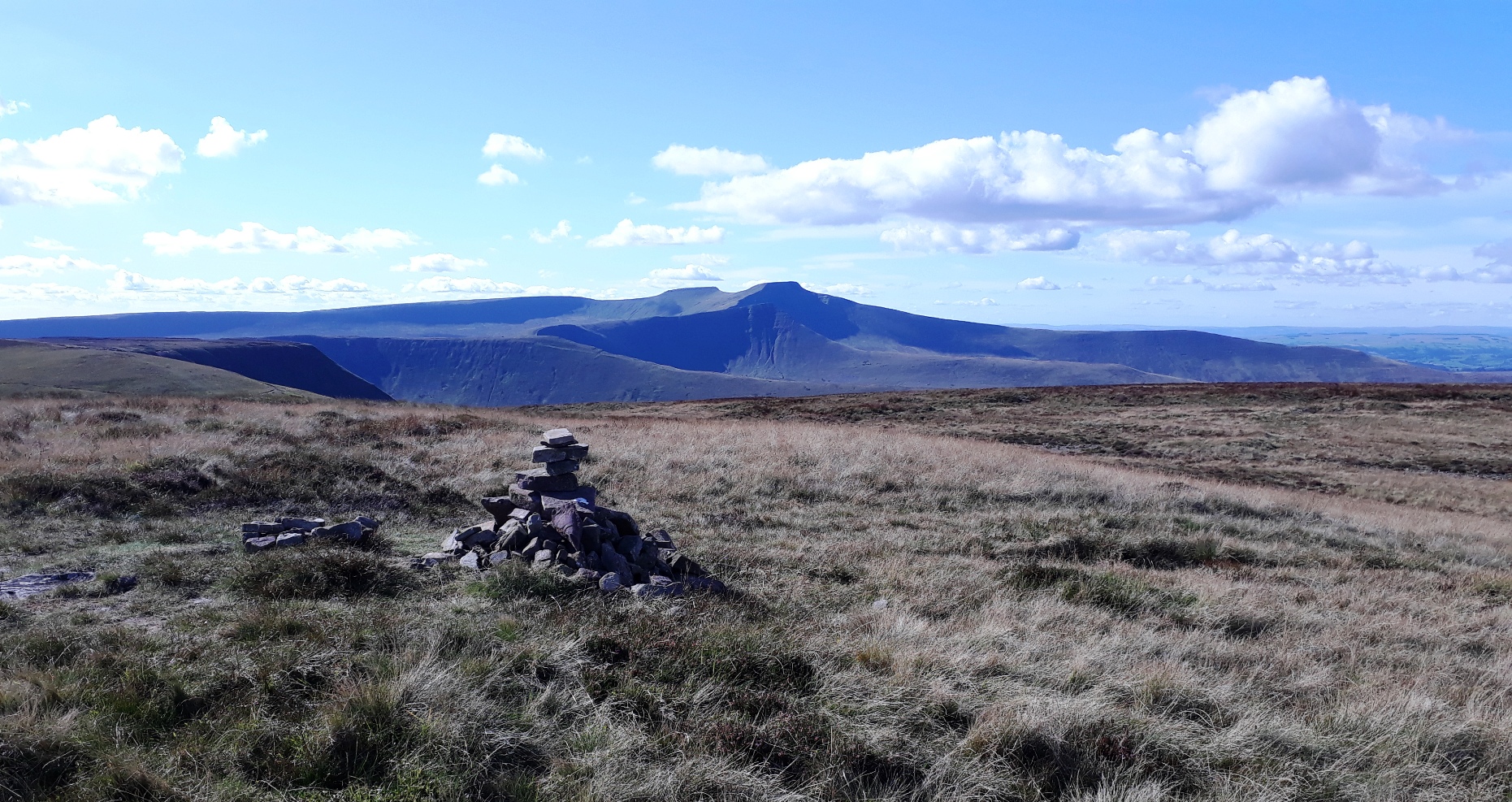 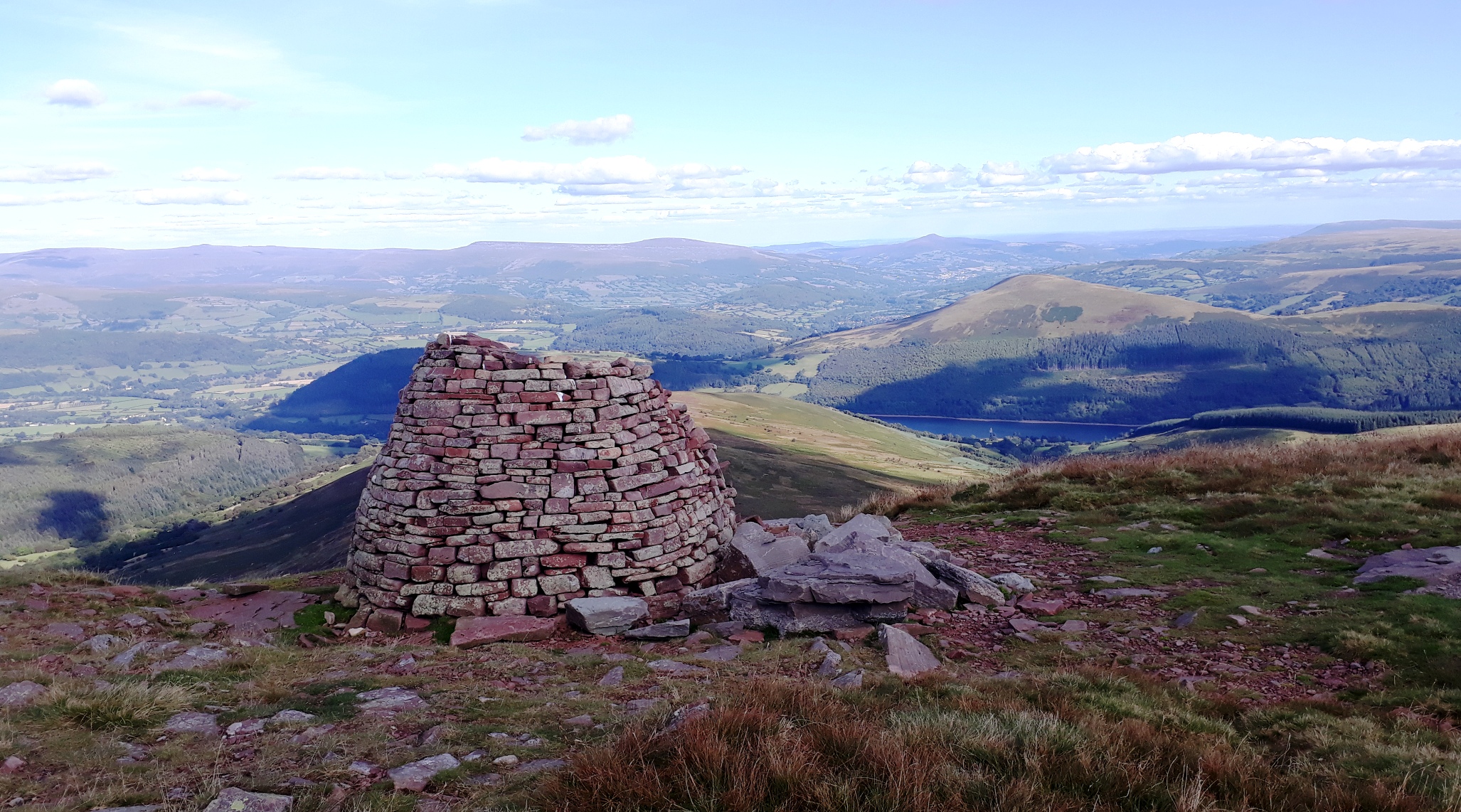 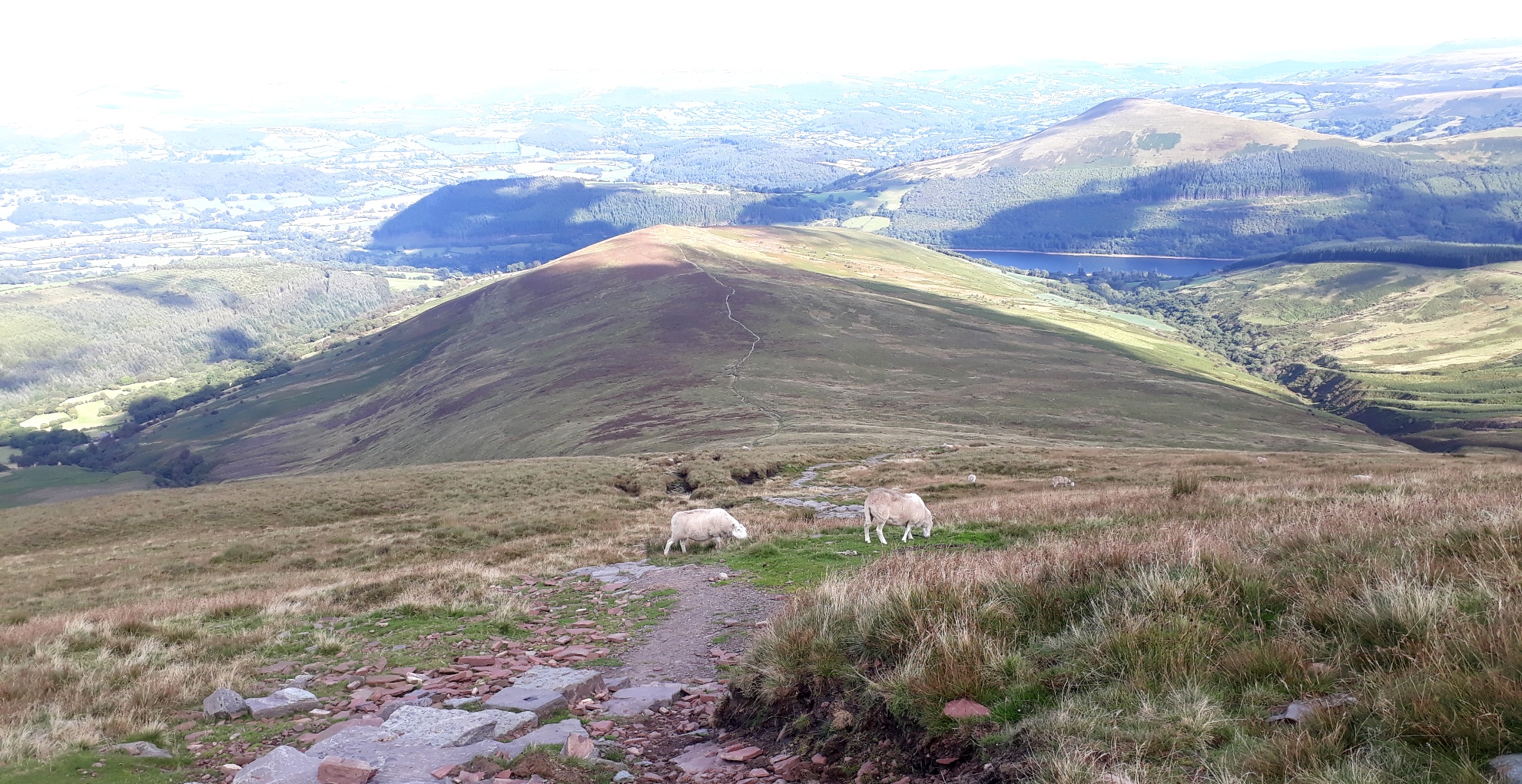 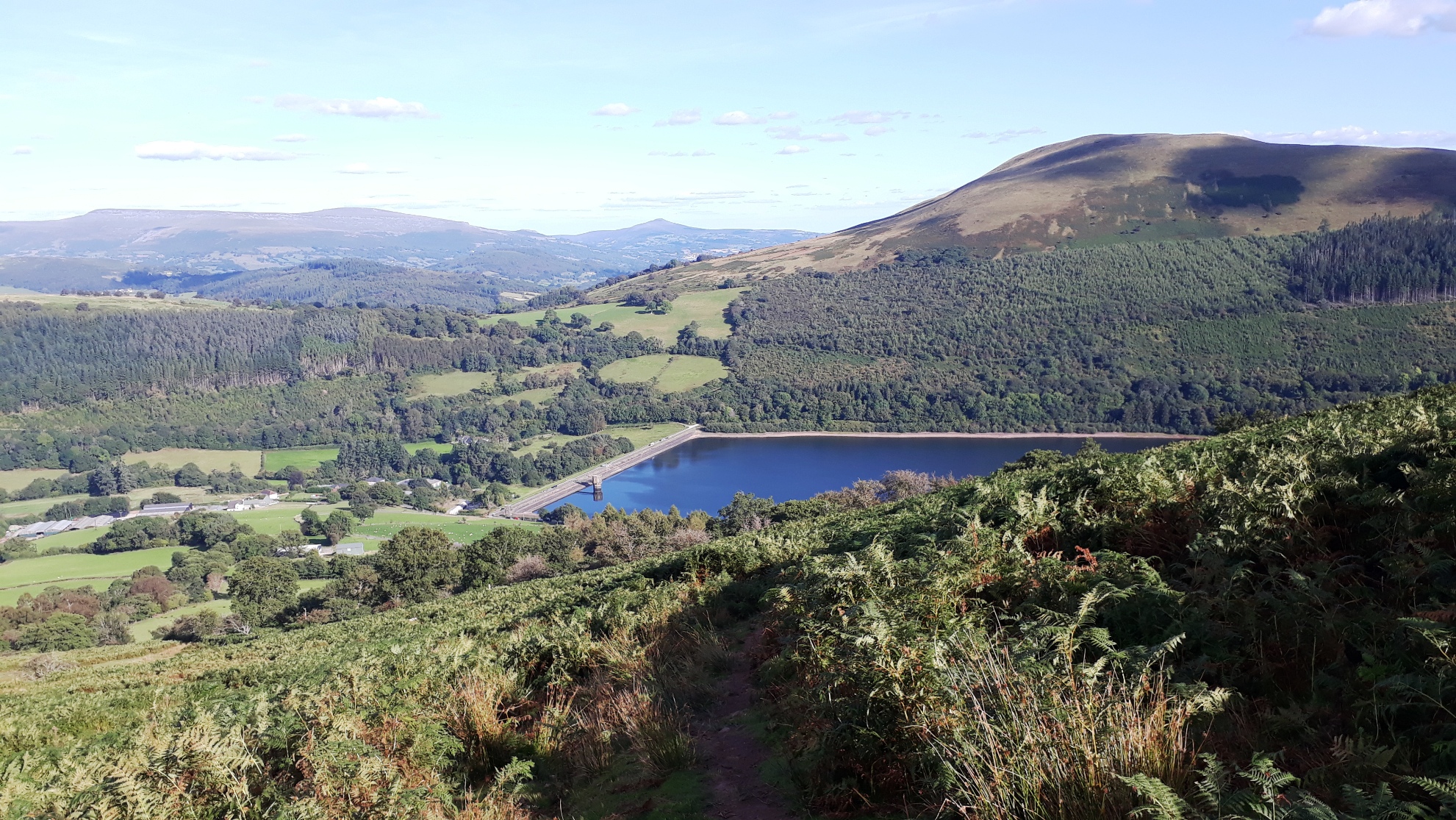 20210920-163312. A good few folk are parked up in the lay-bys on the dam, many sitting on camping chairs and sunning themselves in the late afternoon sun. The view of the the Talybont Lake provides a very fine prospect as I quaff a couple of cans of ice-cold Nanny State (once again, eternal thanks to Dr Frank for coming up with the idea of a taking a cool bag filled with freezer blocks to keep the finish drink cold!). 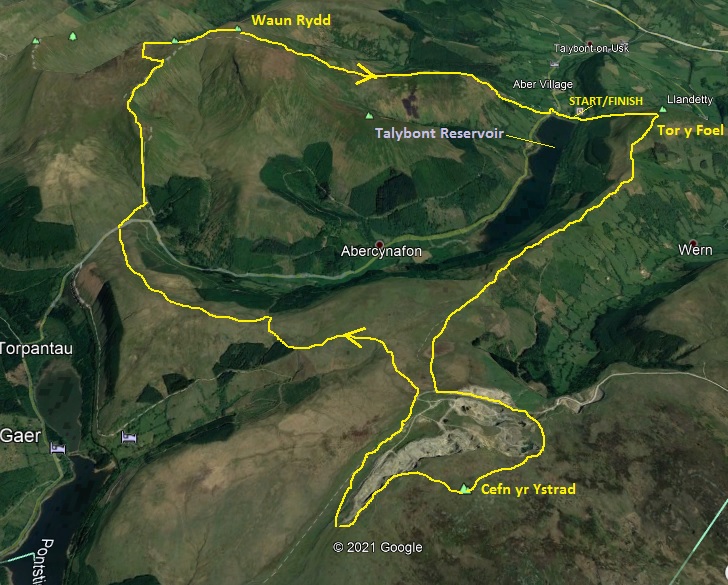