This was meant to be an outing with Dr Frank, but like so many newly retired folk, he's finding it difficult to fit everything he wants to do into 24 hours - and being a granddad is pretty time-consuming!
So it became a solo venture - to Snowdonia - OK now that travel restrictions have been lifted.

When walking to Pen Yr Helgi Du from Pen Llythrig y Wrath a couple of years ago, I'd noticed that Bwlch Eryl Farchog looked pretty dramatic. But on that occasion it was the back end of the day, and I didn't think I'd have time to include it in the walk.

However, I've wanted to visit it ever since, and this was to be the occasion. The main plan was to get up into the Carneddau, and then on to Llywtmor. But although the spirit was willing, the flesh was sorely tried, such that once I got to the summit of Carnedd Llewelyn, I realised that I simply didn't have the energy to extend the walk by pretty well double the distance.

So this is the route I actually take.

As regards the weather, a quick look at the forecast indicated that it was likely to be pretty chilly, especially if the threatened snow materialised; so after my last outing (in which I had to manage sub-zero effective temperatures without gloves), I made doubly sure that I was well equipped - including 3 pairs of mitts! 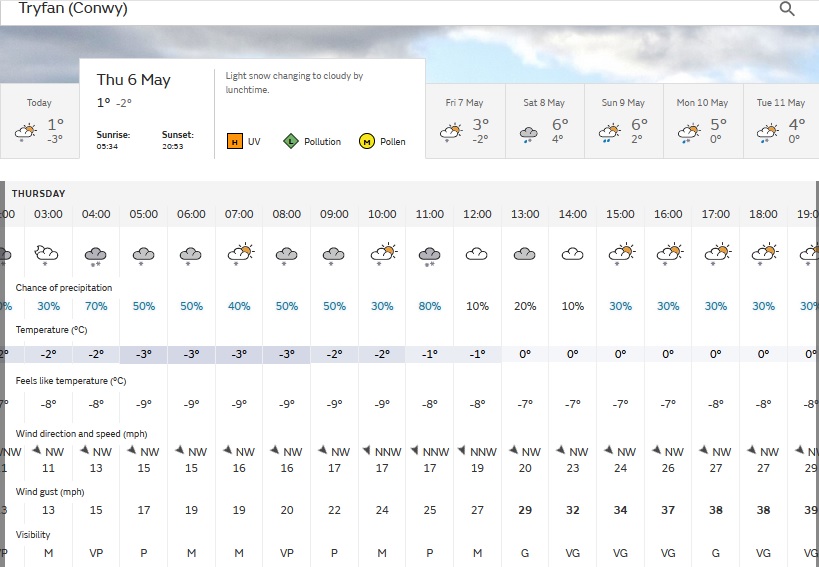 Being conscious that I am planning a longish route given my current lack of fitness, I have chosen to take the metalled track up to Fynnon Llugwy, which makes for a gentle start. 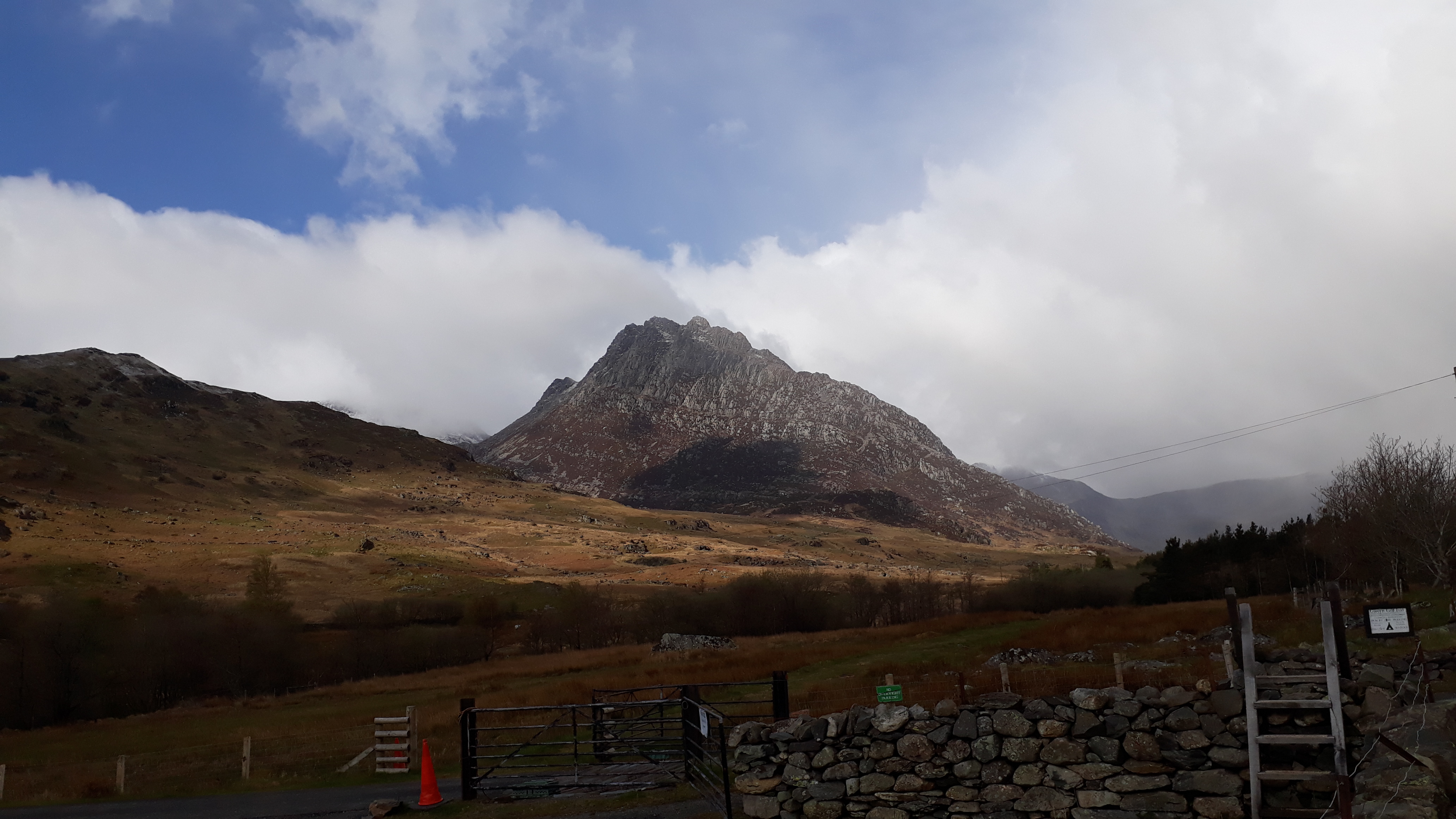 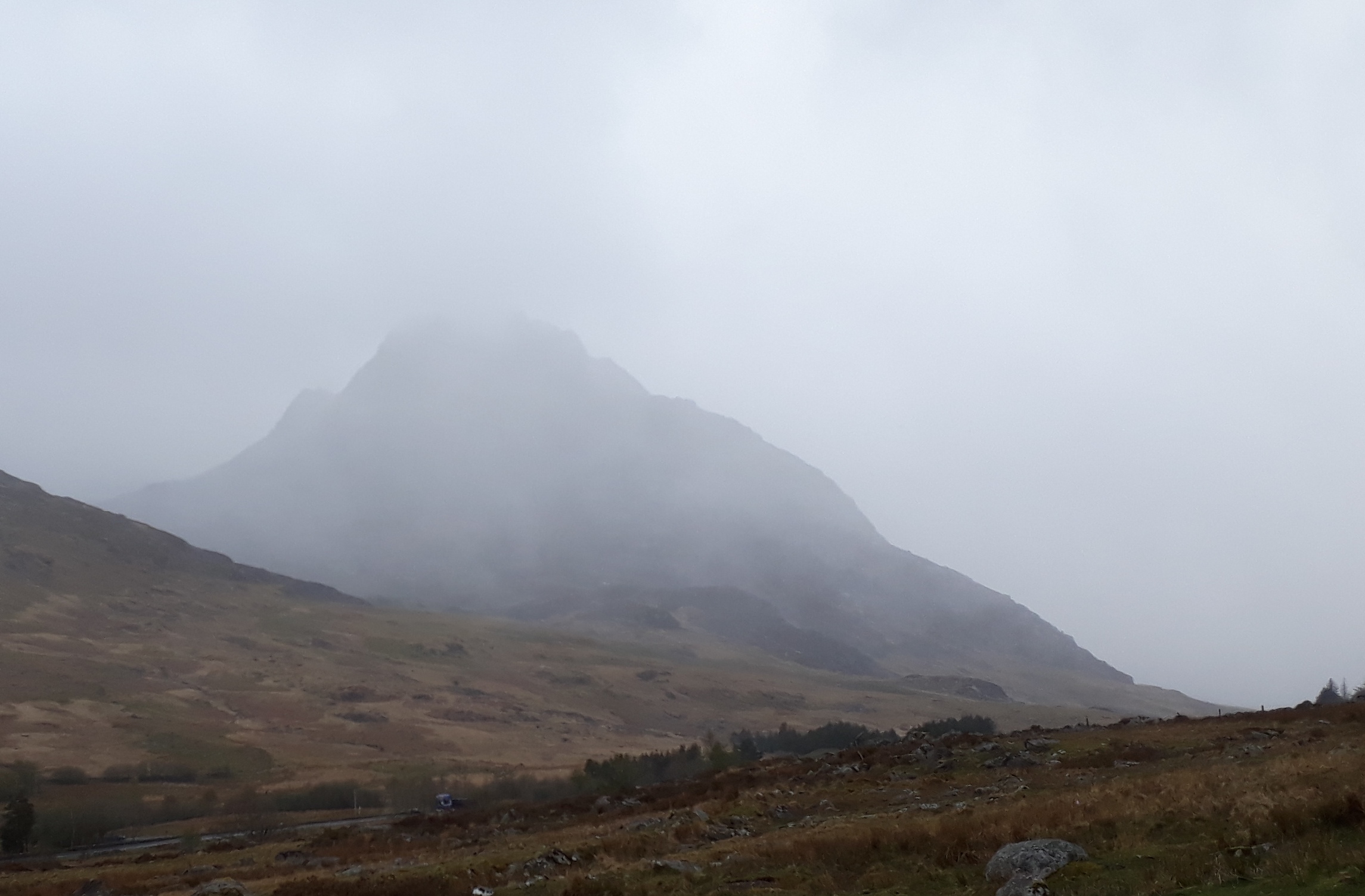 It's for me a long slow pull up y Braich to Pen Yr Helgi Du: slow and steady. But at least my hands are warm, strong wind notwithstanding. 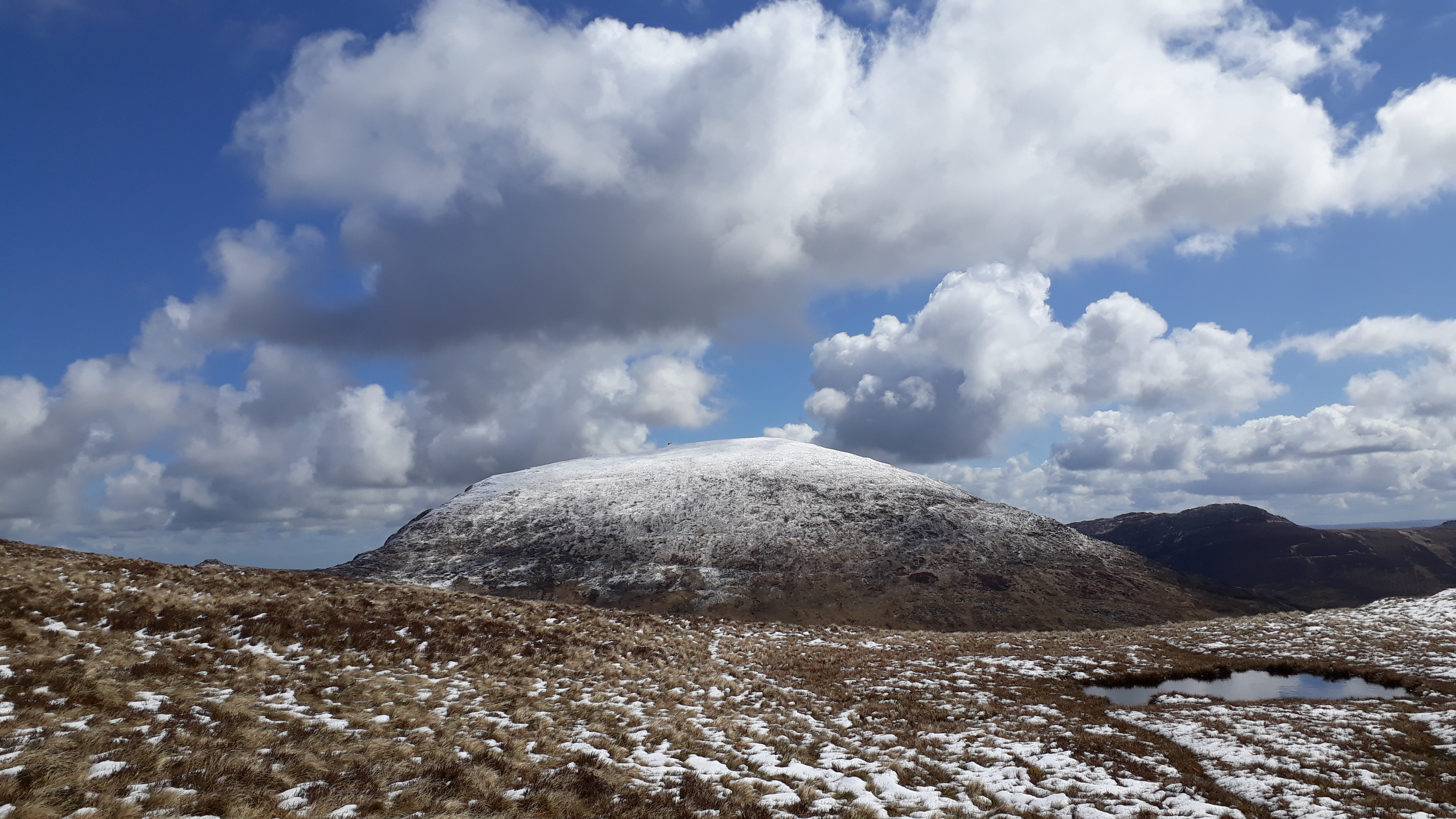 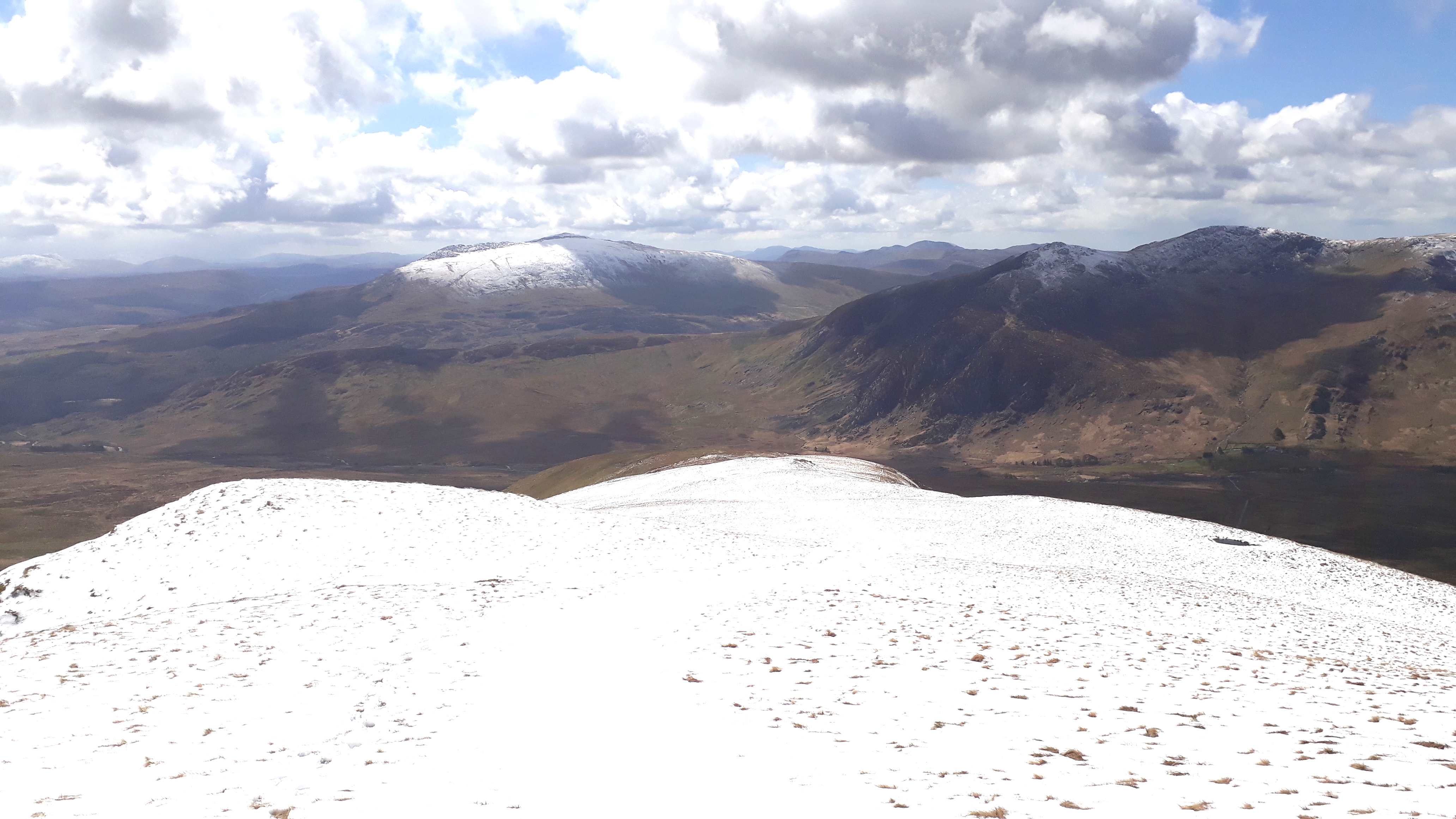 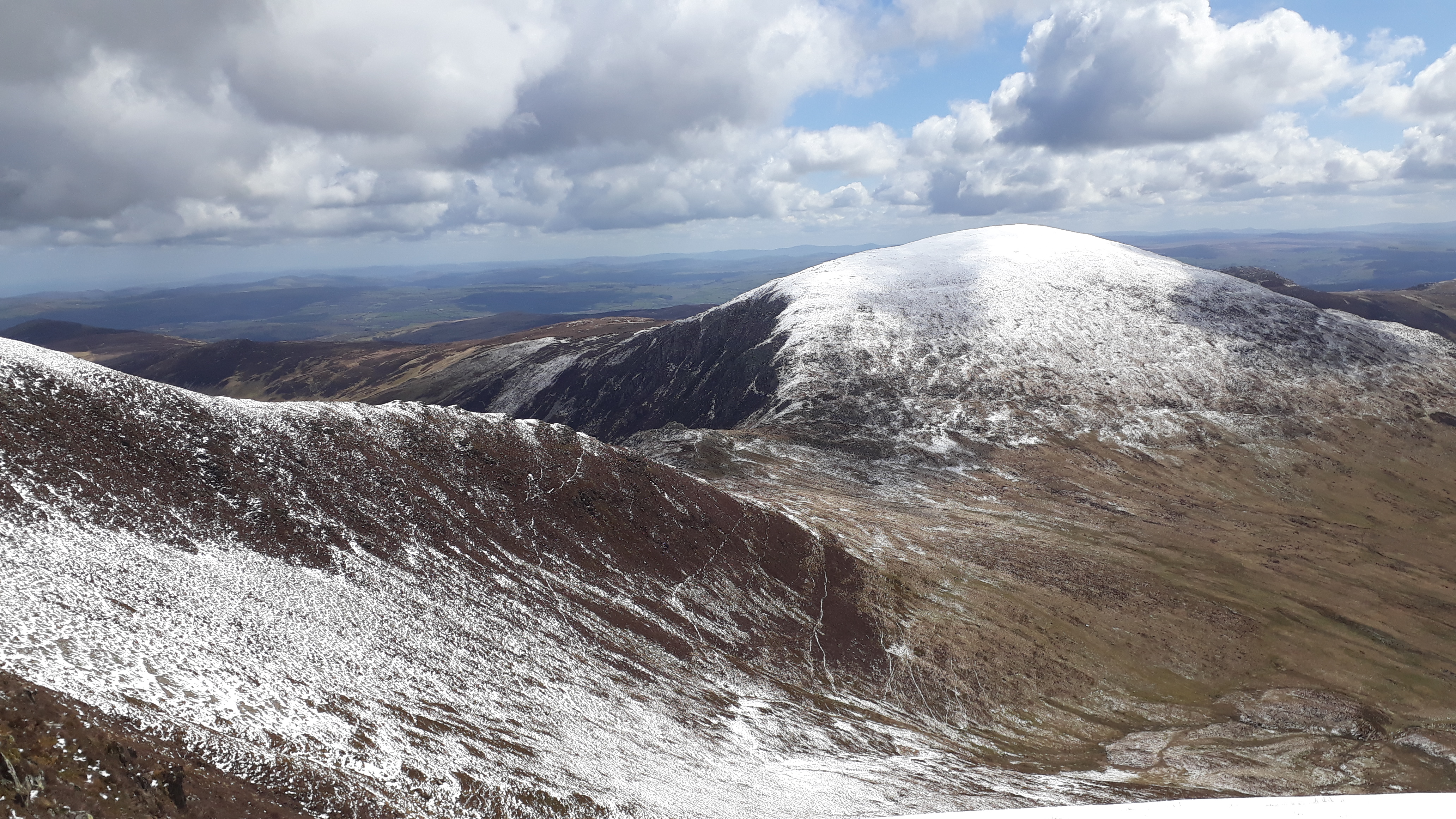 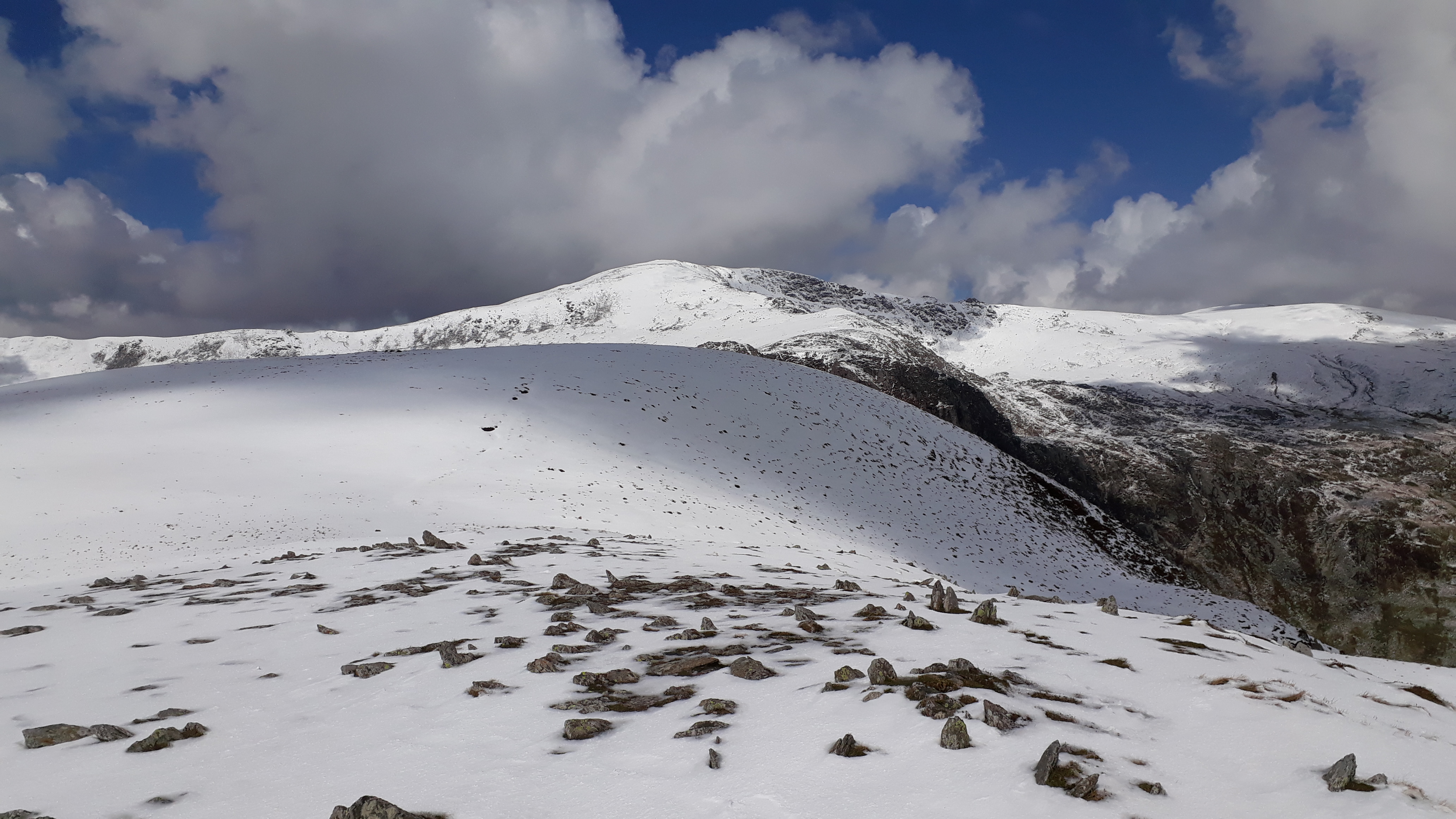 20210506-115524. A few minutes ahead, the summit of Pen Yr Helgi Du, and behind it, Carnedd Llewelyn - at 1064m the second highest peak in Wales. What one doesn't see from this angle is the hefty drop into Bwlch Eryl Farchog immediately before the ascent to Carnedd Llewelyn! 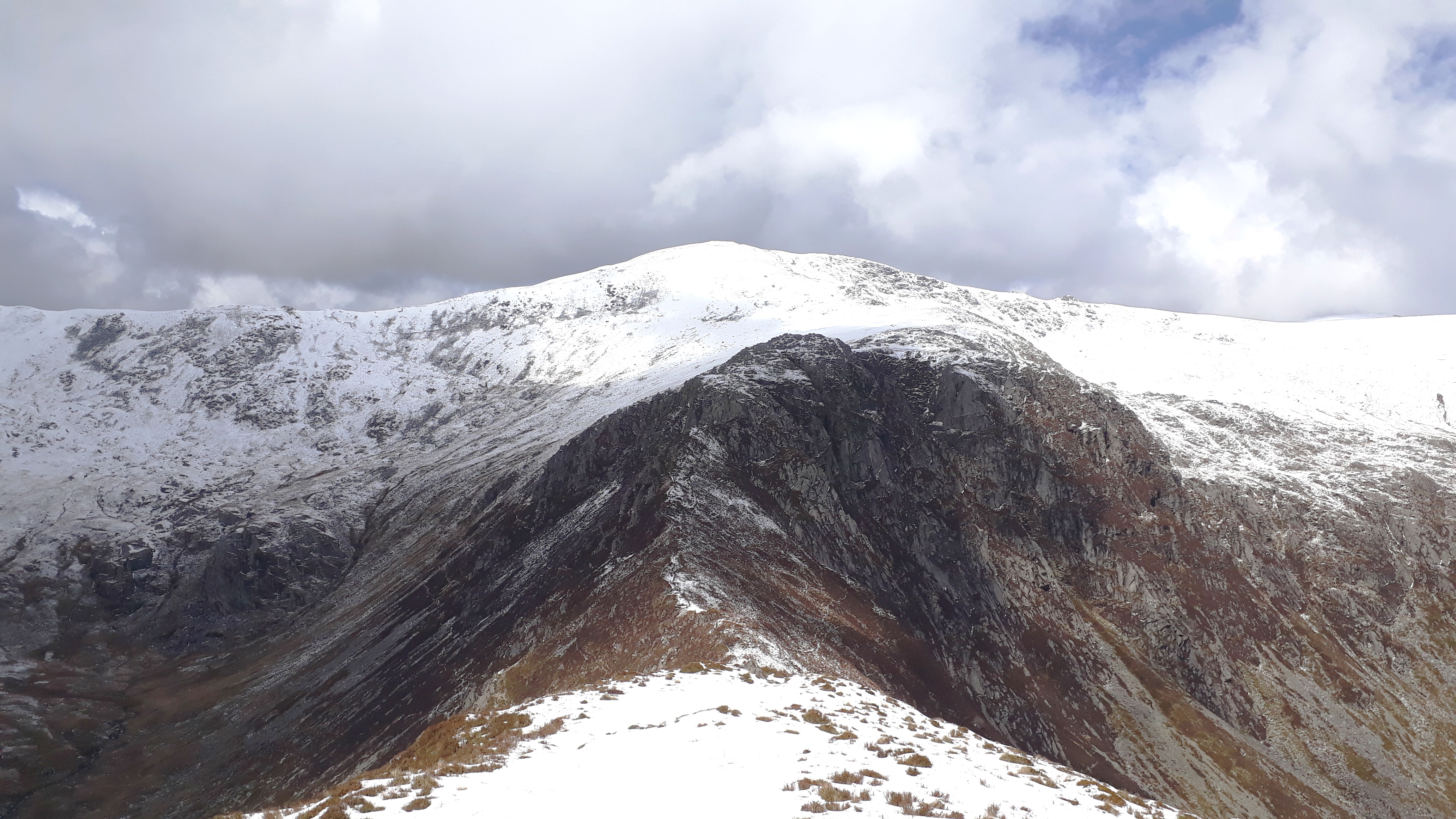 0210506-120444. Again, the edge of the drop into Bwlch Eryl Farchog only just visible (if you look closely) in the very slight difference in the shade of green on the ridge. 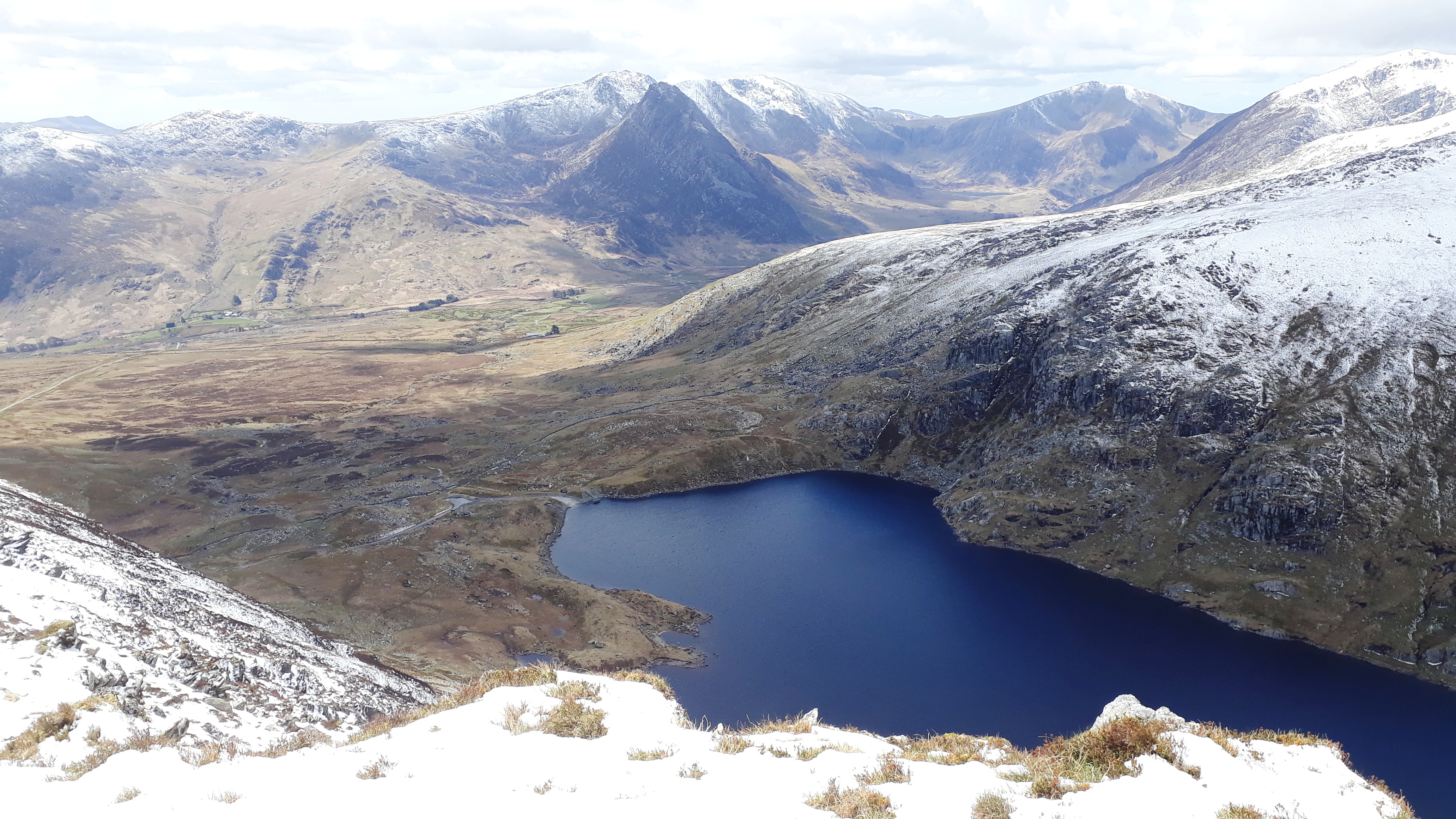 20210506-120455. Great views in all directions, this looking down to Ffynnon Llugwy, with Tryfan, the Glyders, and Y Garn showing in the background. 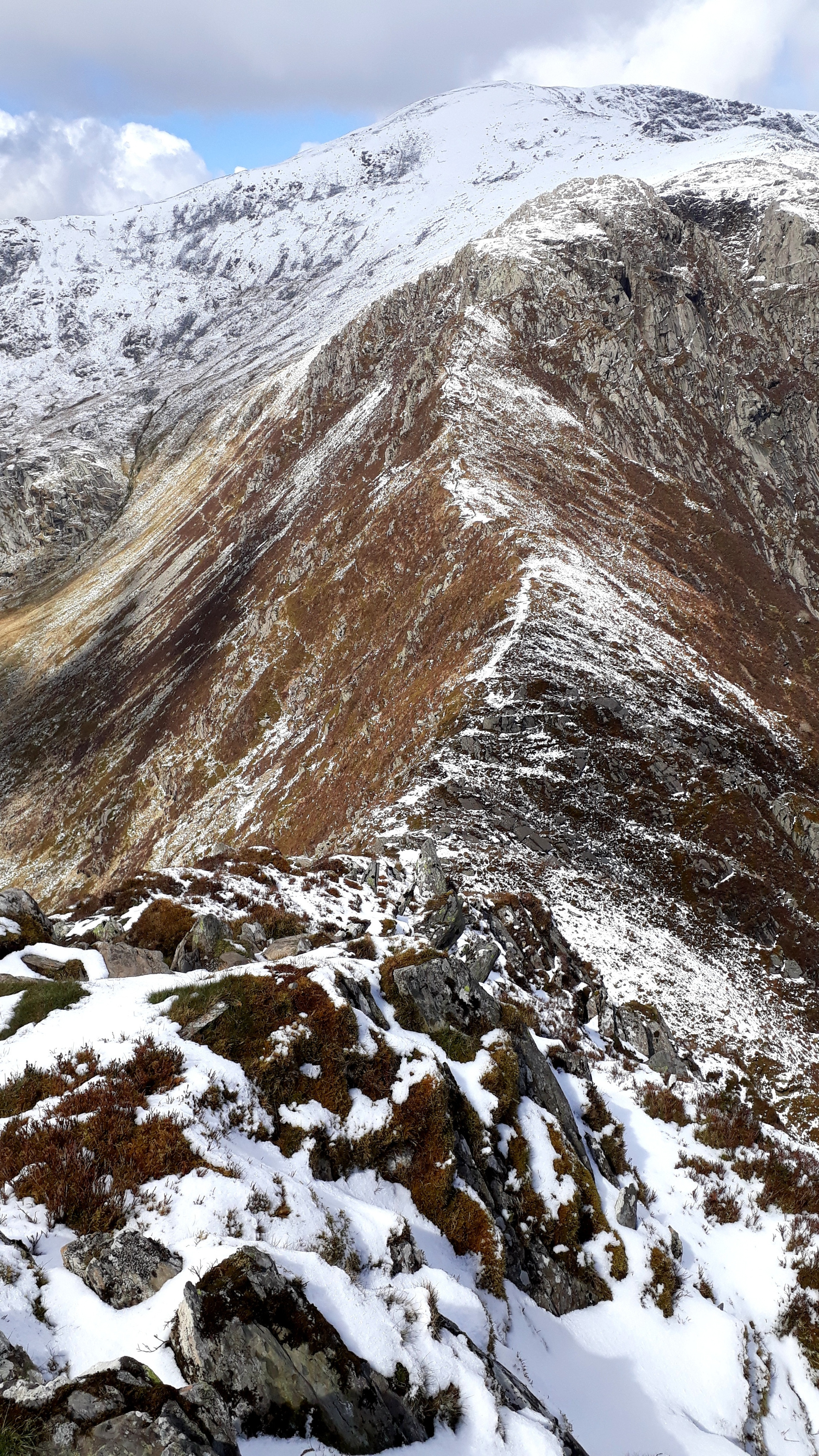 20210506-120717. Arriving at the start of the drop to Bwlch Eryl Farchog, this is what I see: what looks like (and indeed turns out to be) a non-too-challenging but very enjoyable grade 1 scramble. In fact it's a bit steeper than it looks on this pic, as can be seen on the following pics. 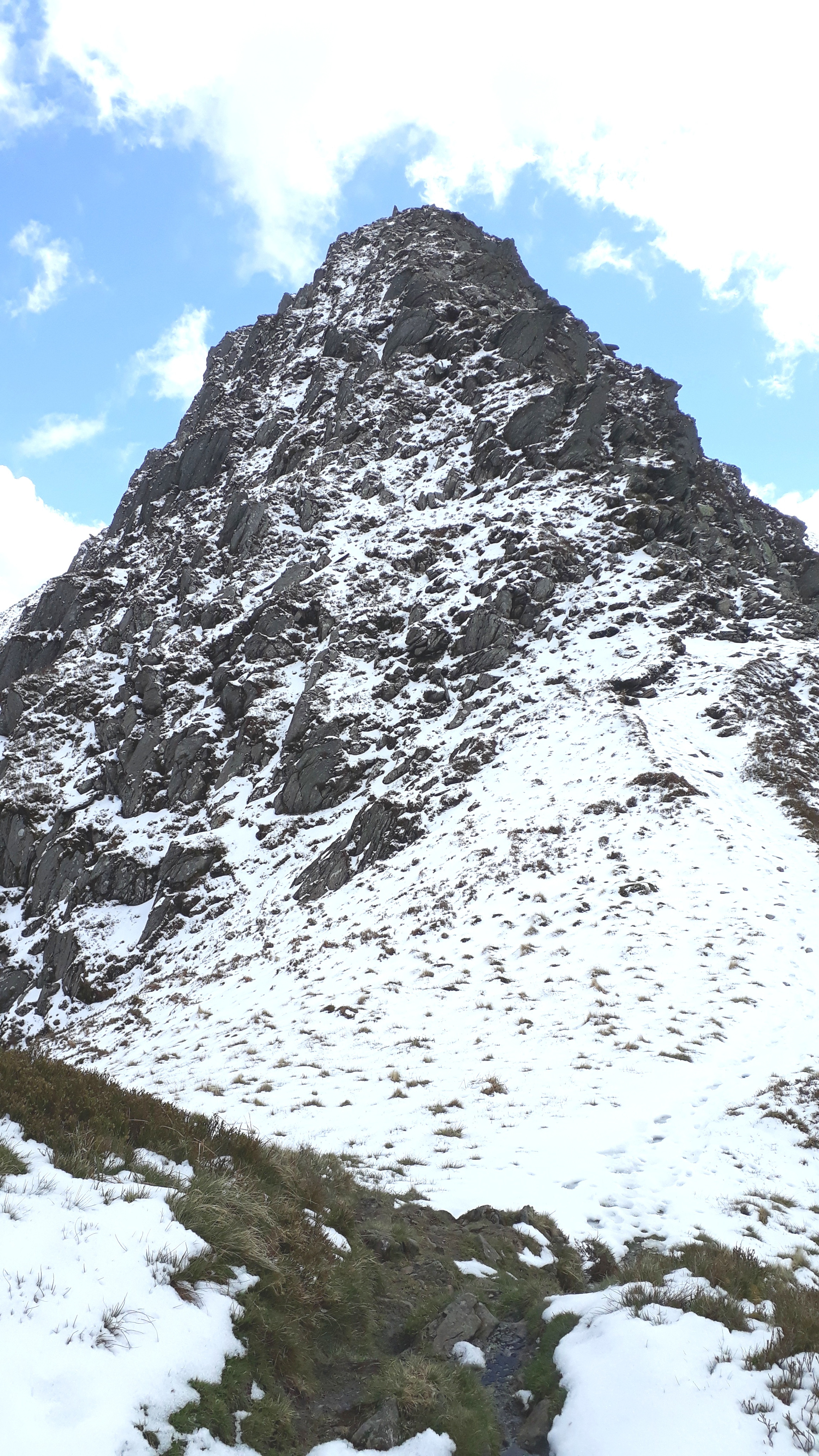 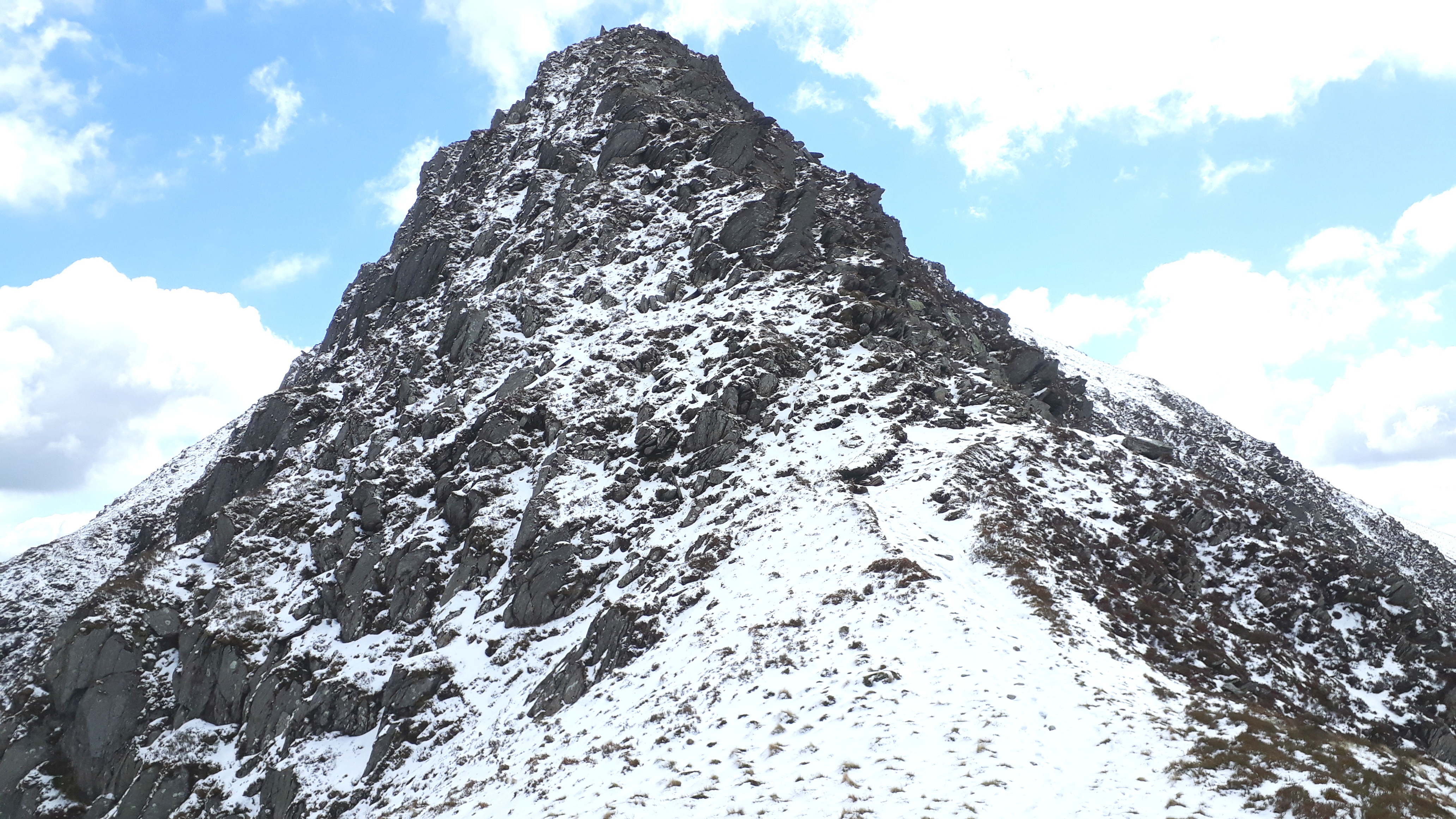 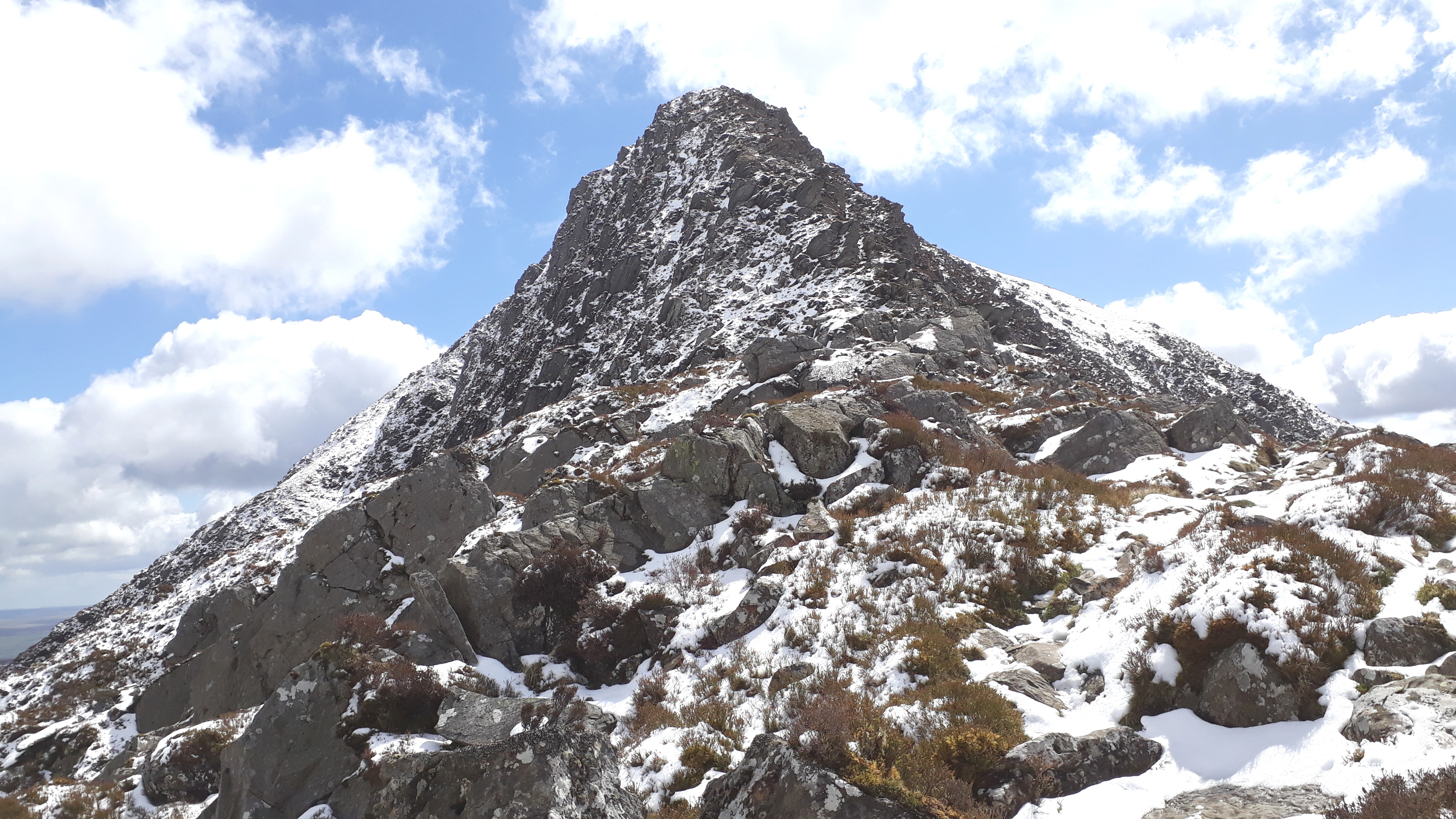 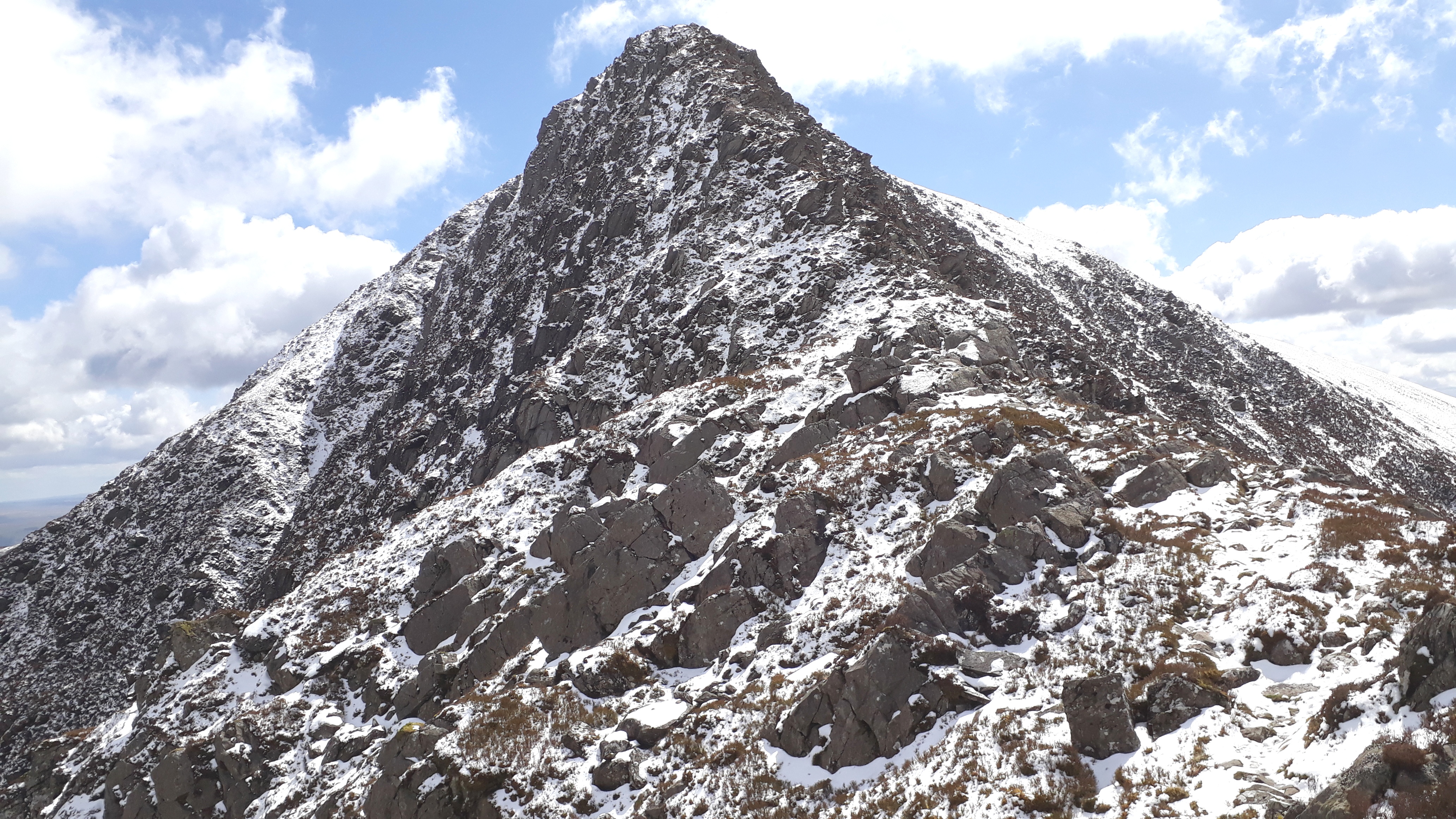 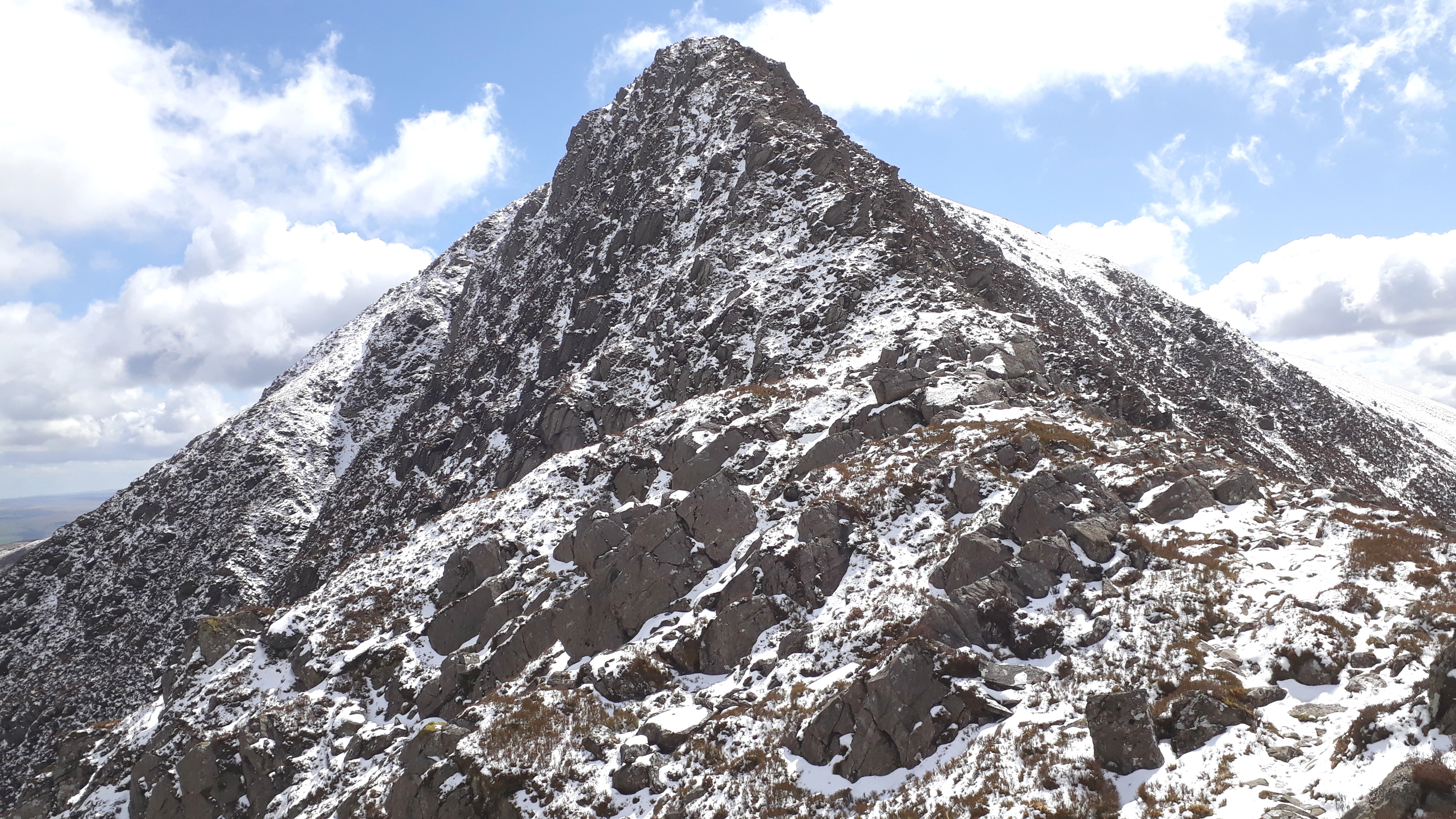 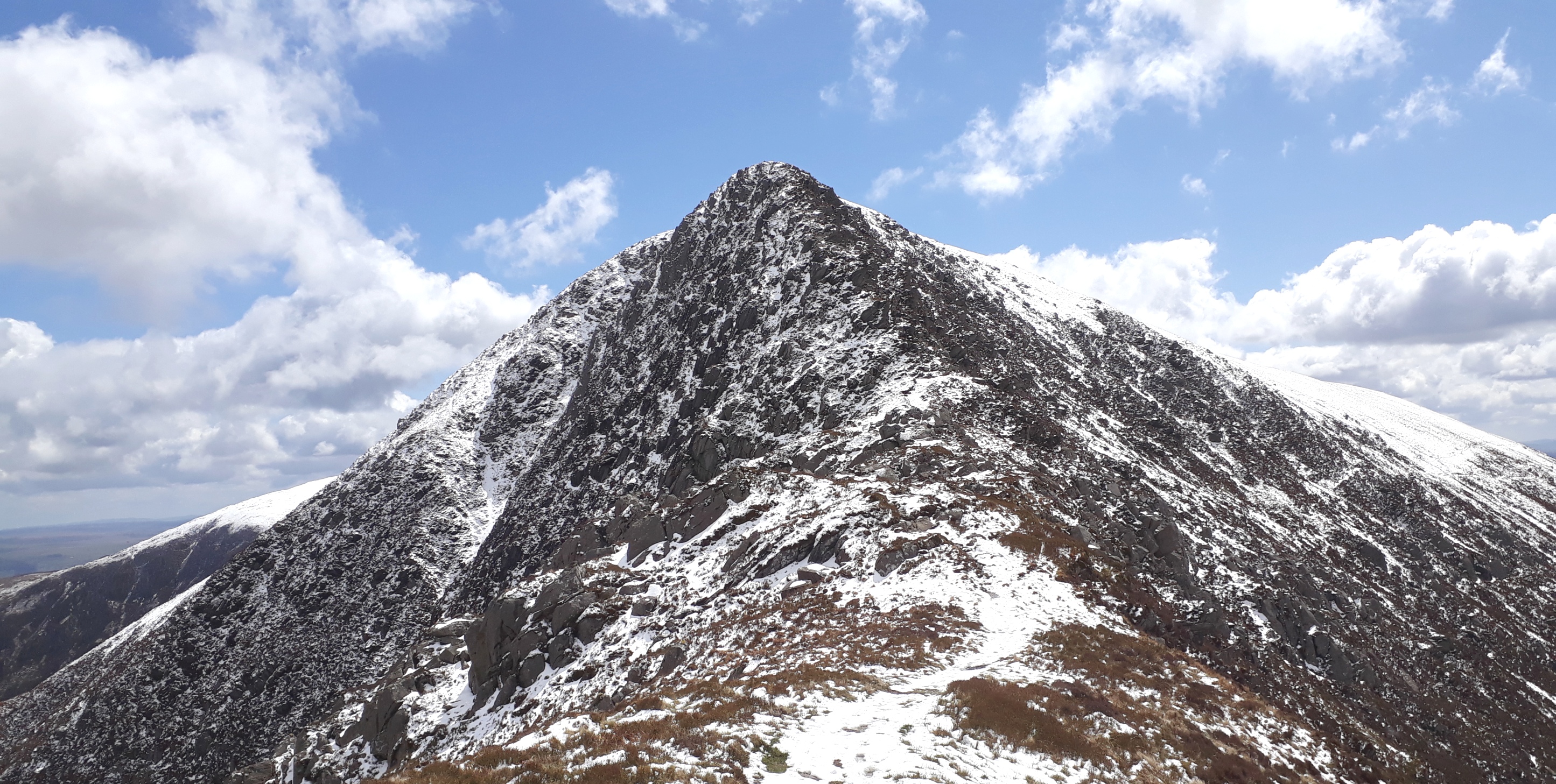 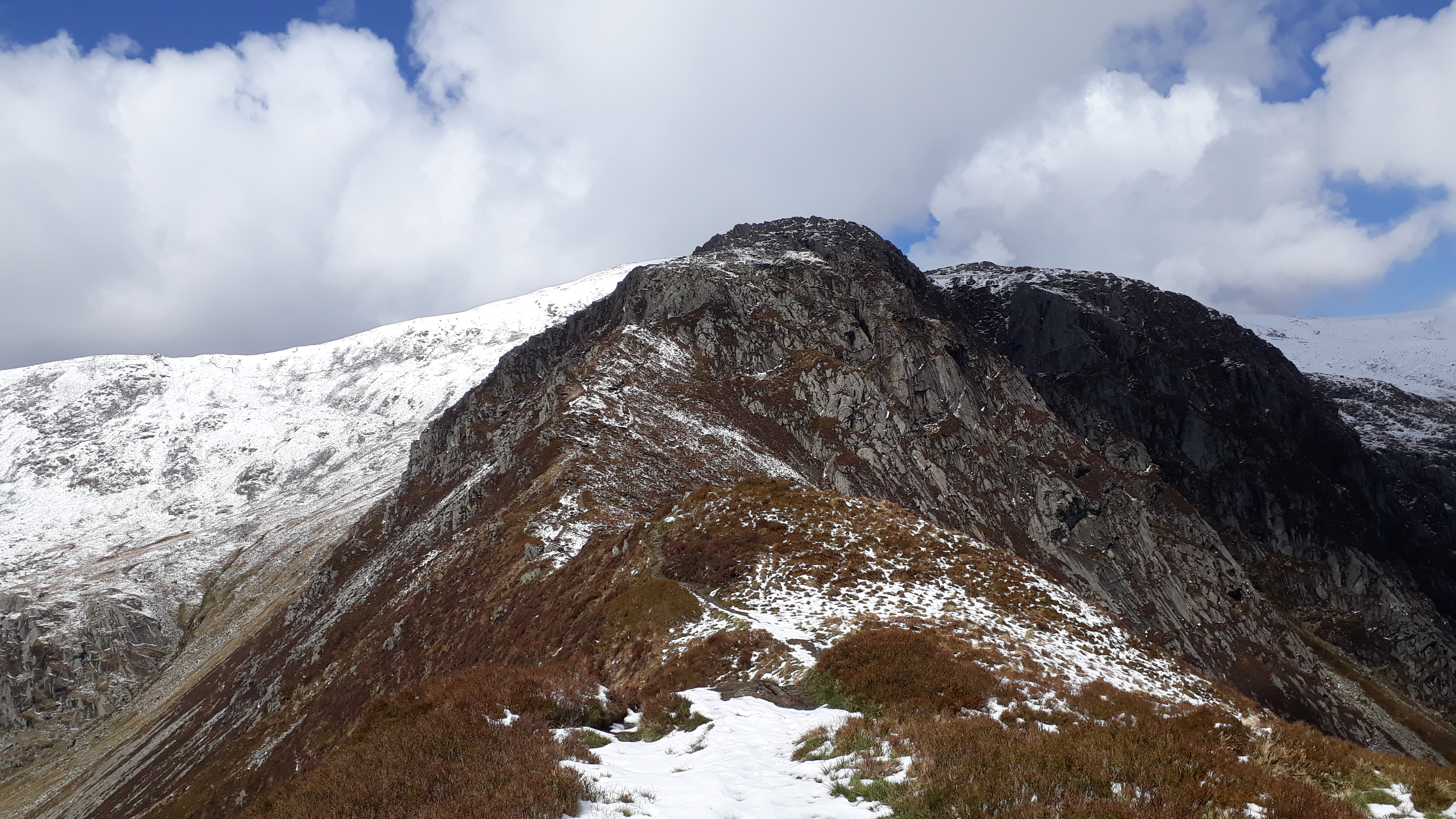 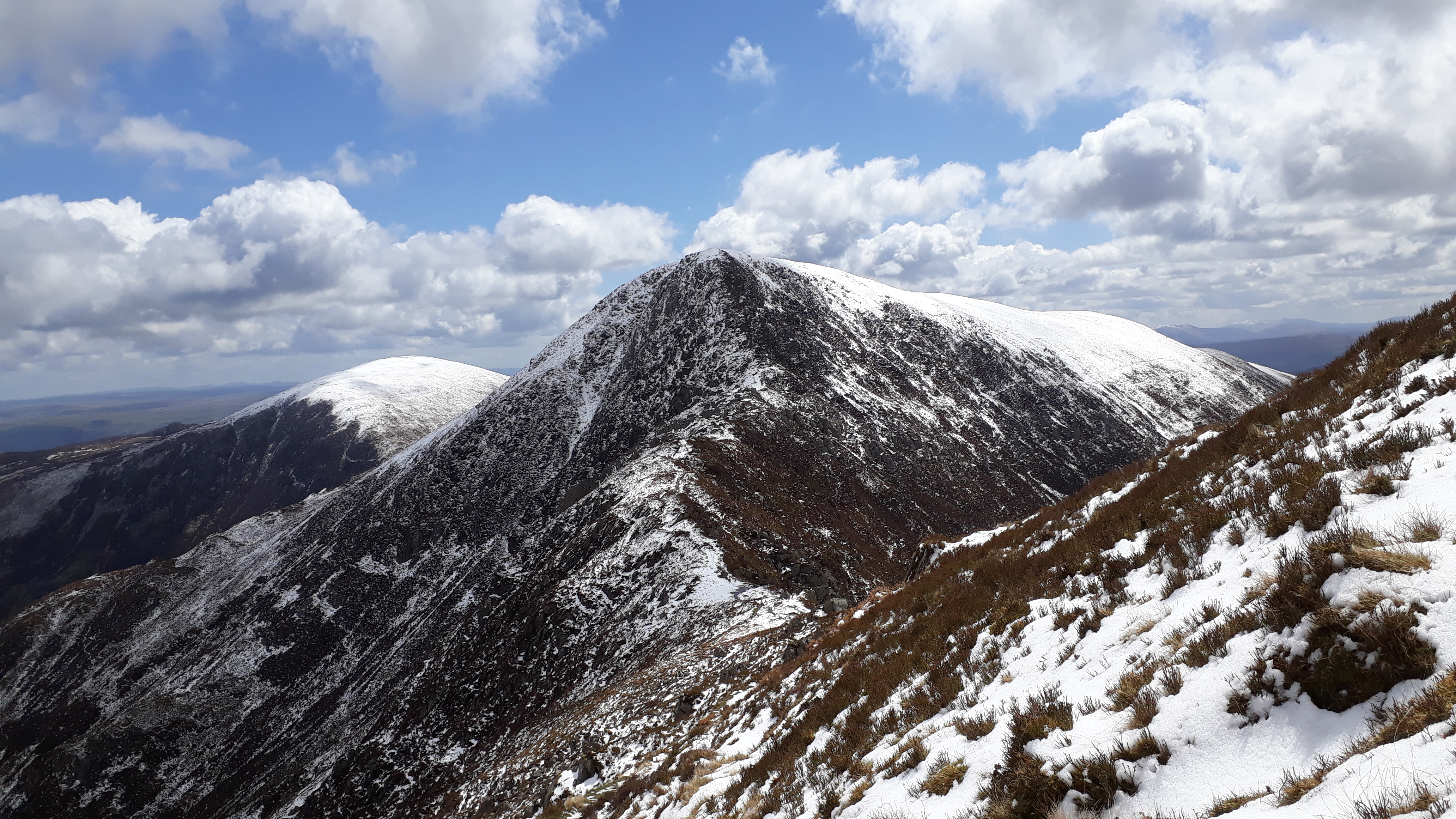 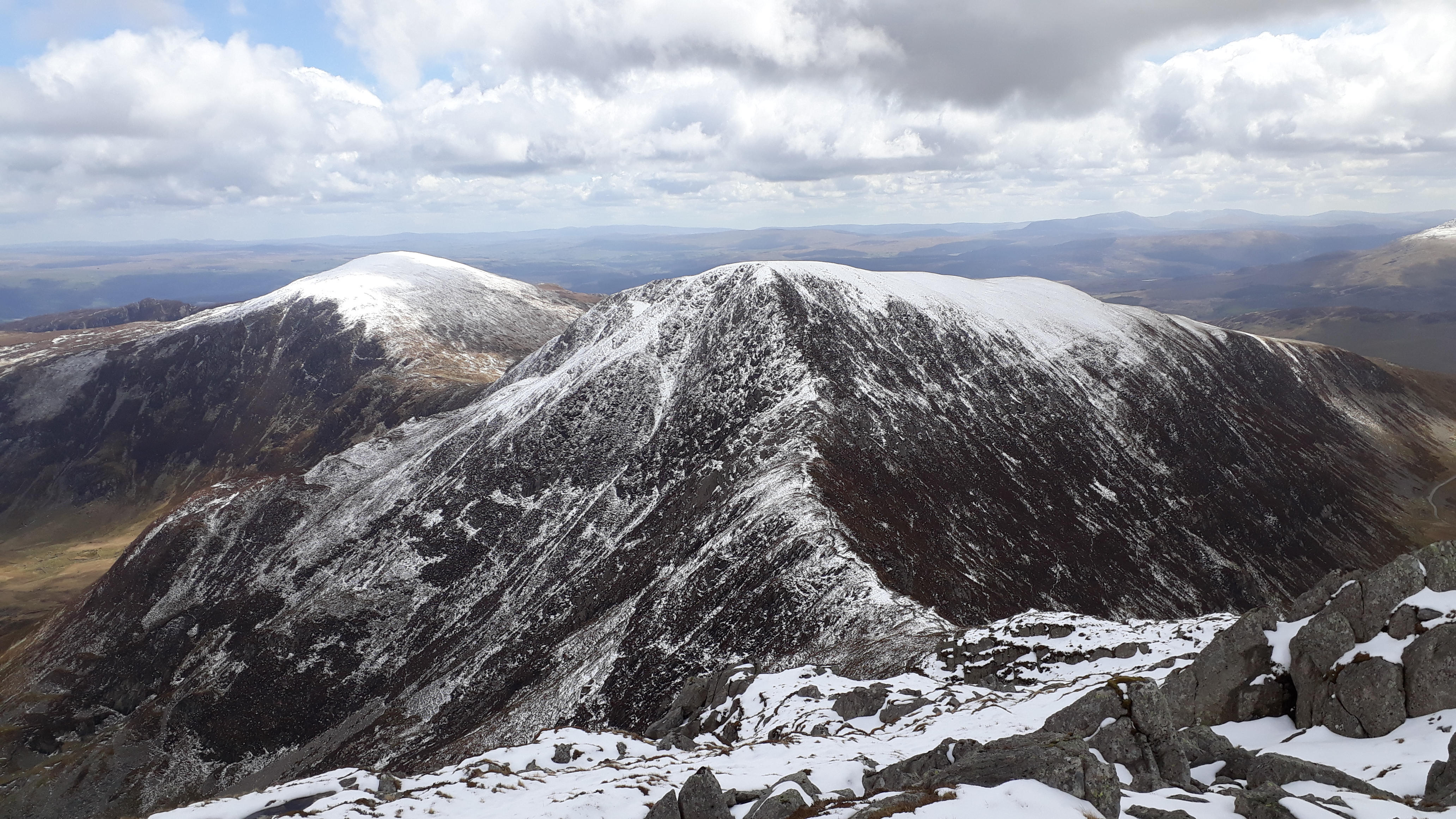 The forecast wind is blowing quite strongly now, so I'm thinking it'll be on the blowy side on the top... 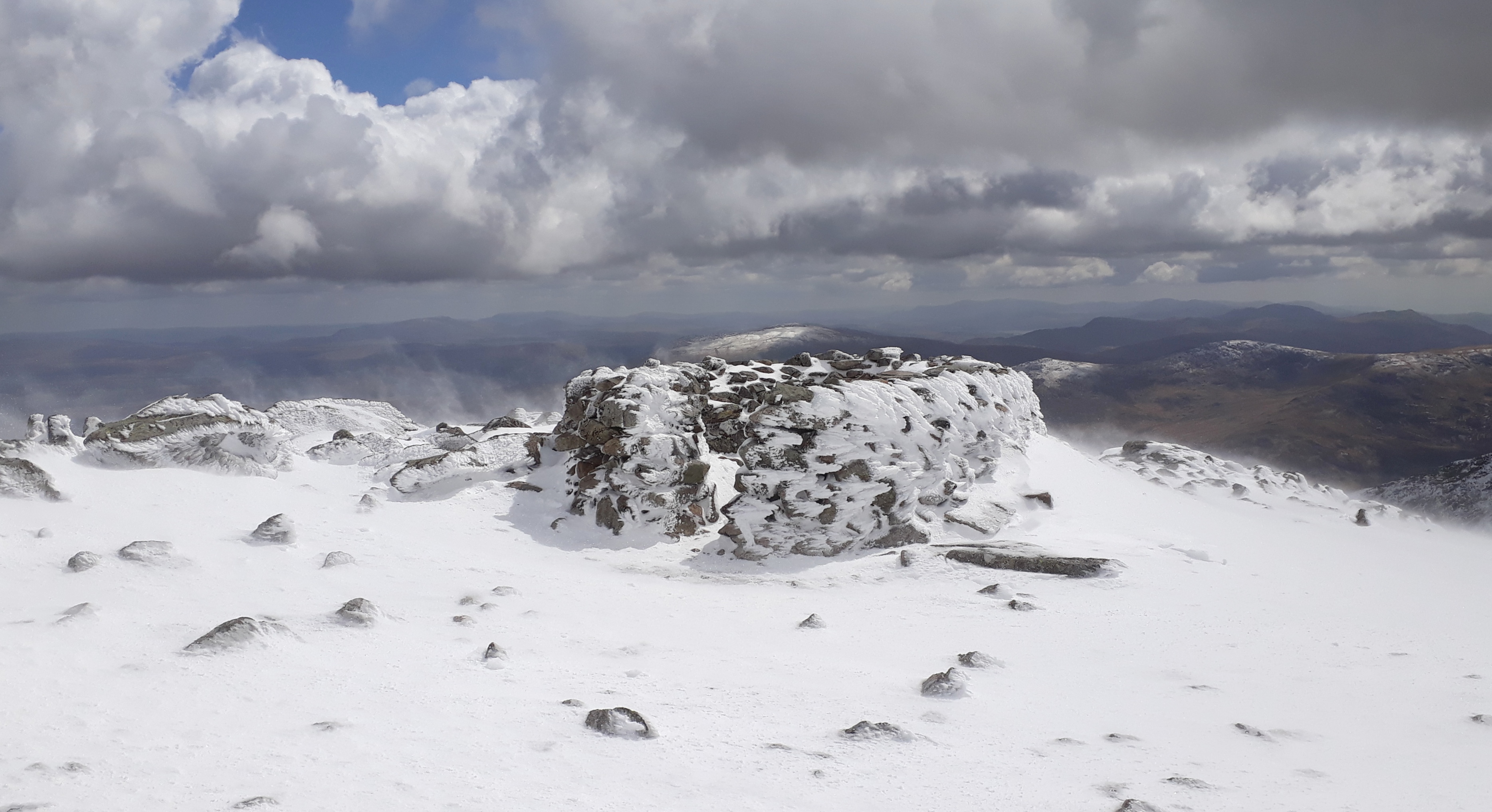 20210506-141754. ... and boy am I right! The shelter on the summit isn't really performing its function at all, and the spindrift is doing its best to flay the skin from my face! I'm having to use my mitts to shield it at least to some degree. The wind speed feels to be well above 30mph. So I don't hang around, abandoning the plan I've had to take a bite of lunch within the shelter. I can see the next points of my original plan - Foel Grach, Carnedd Uchaf and Foel Fras - but I'm pretty pooped from the climb up to Carnedd Llewelyn, and, as I've been realising for some time, there isn't going to be time to get out to these lot: I need to curtail the extended plan, and head off back. 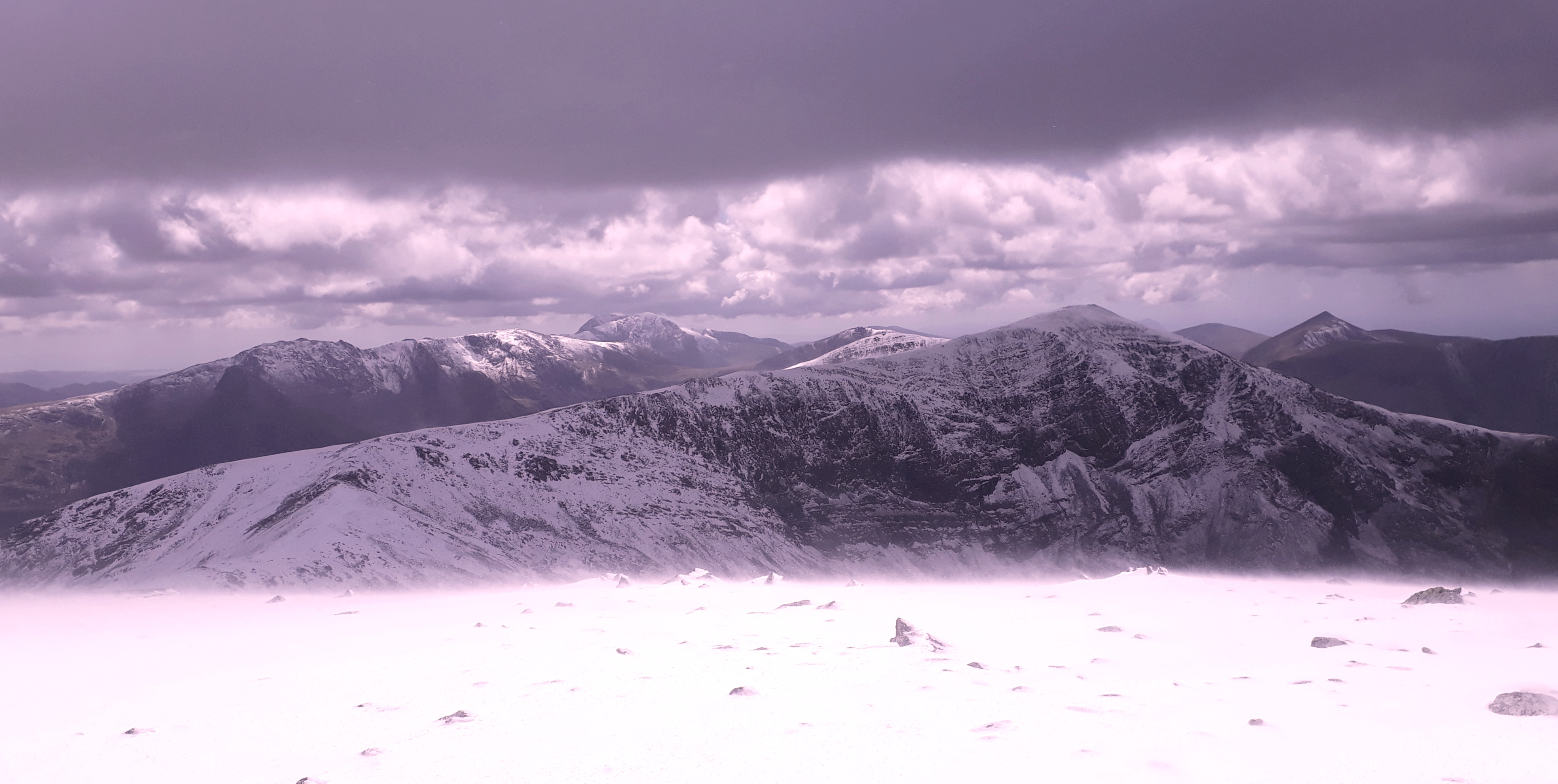 20210506-141805. As I set off, though, I have time to appreciate that absolutely magnificent moody vista of Snowdonia before me. 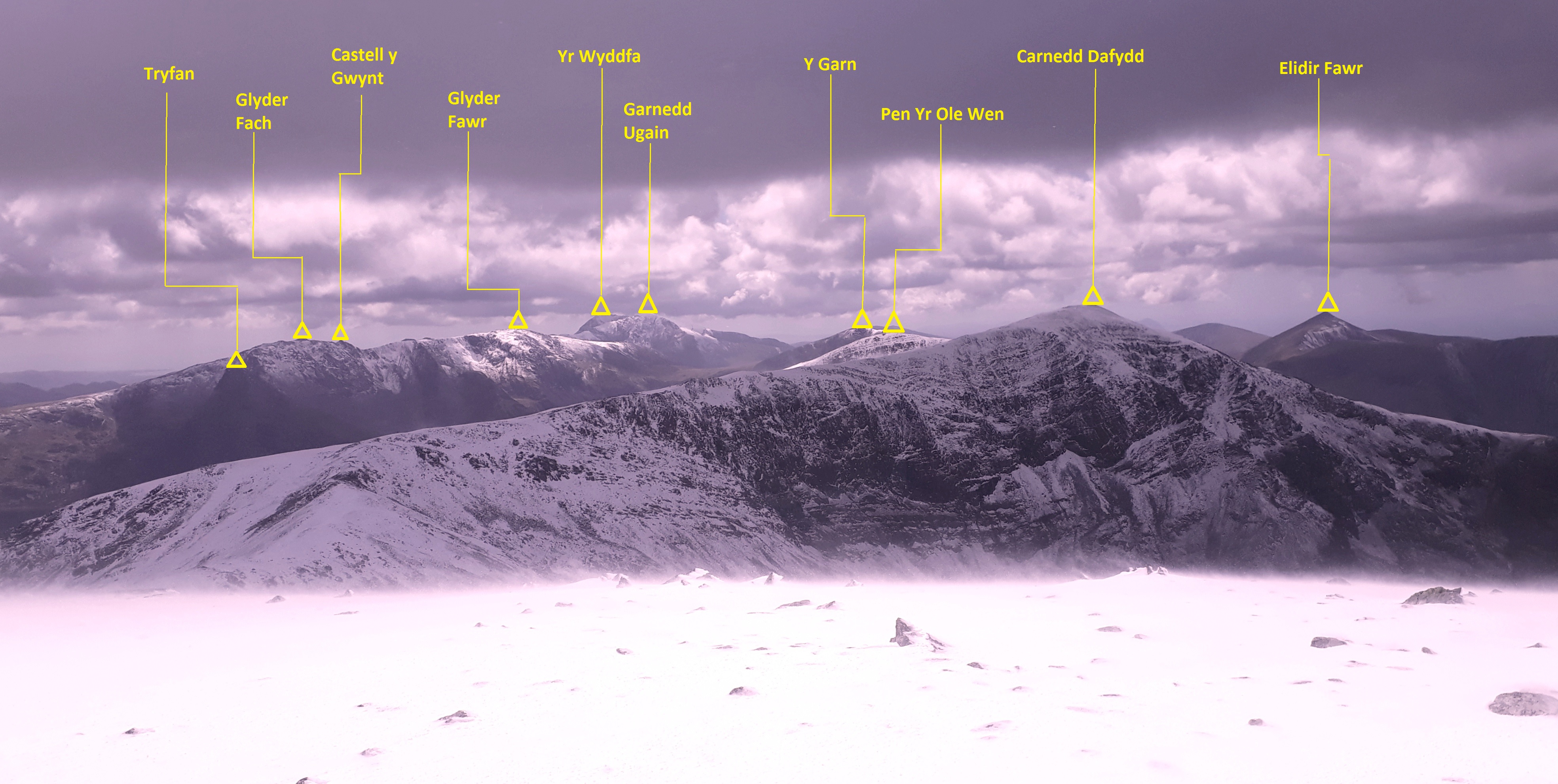 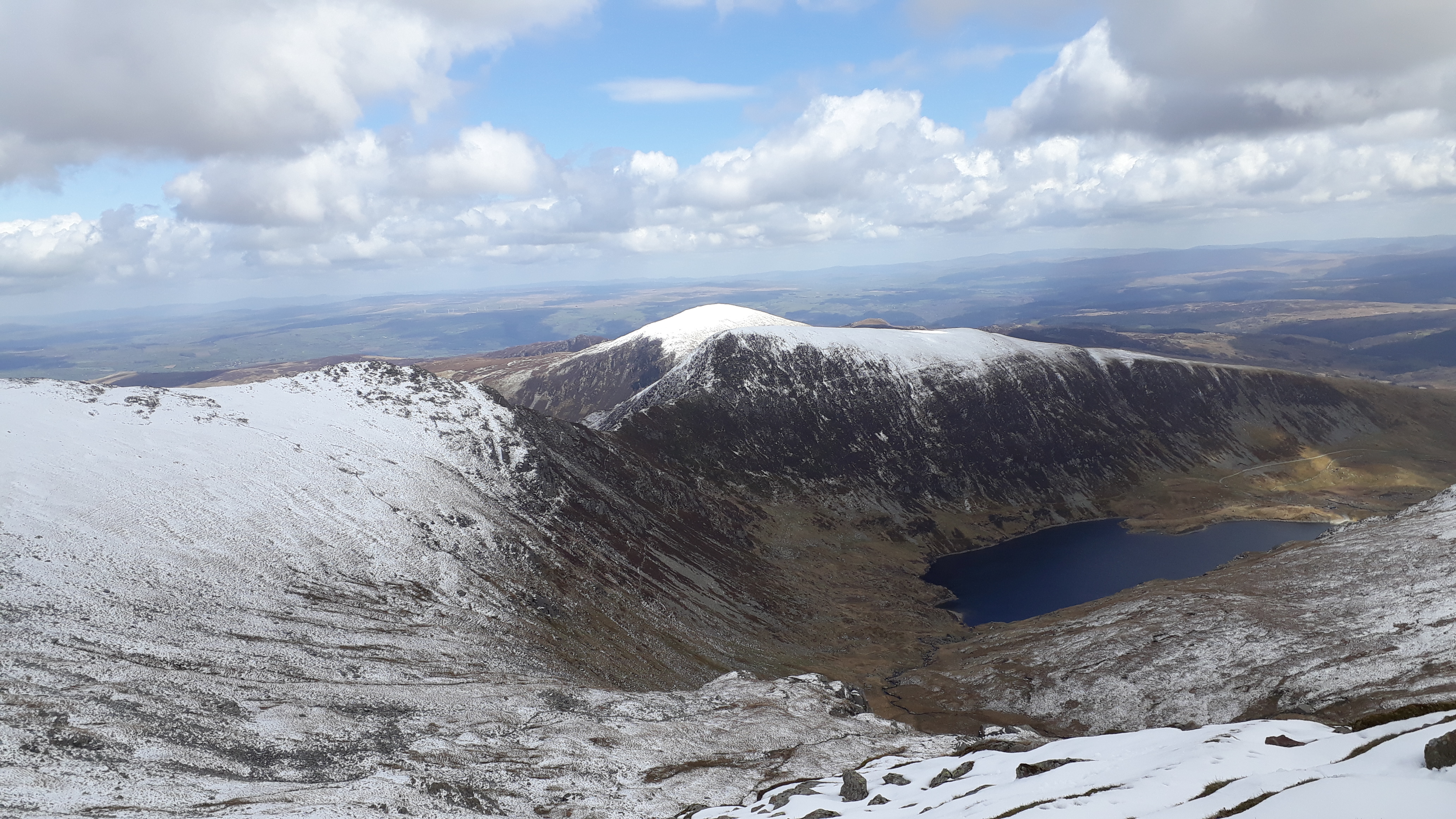 20210506-143240. Looking just south of east across Ffynnon Llugwy towards Pen Yr Helgi Du, with Pen Llythrig y Wrach just behind it, taken from about 2/3 down the descent of Carnedd Llewelyn. 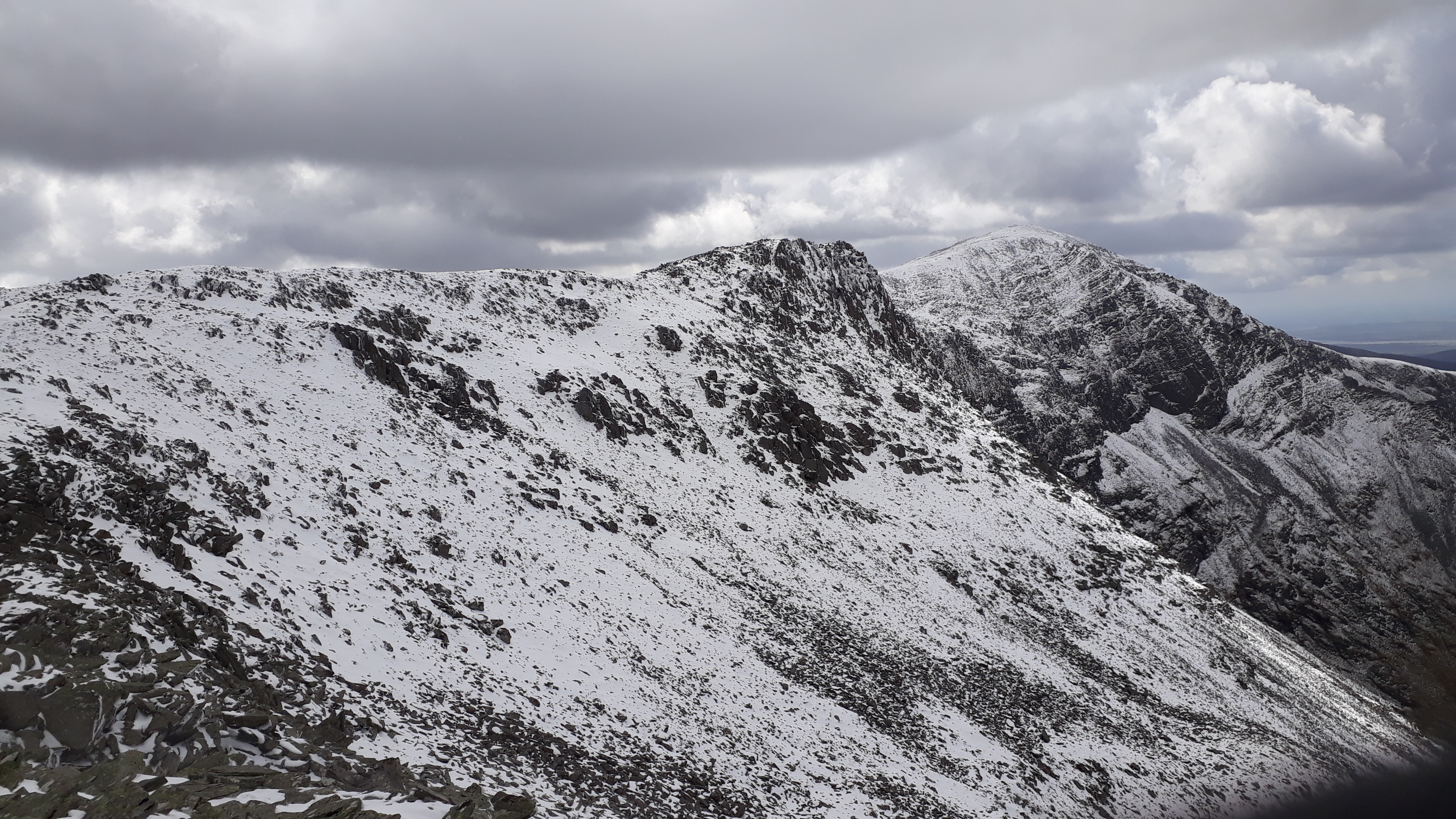 20210506-144601. Looking west to Carnedd Dafydd just before I bear off left to head down the shoulder that takes me back to the Ogwen valley. 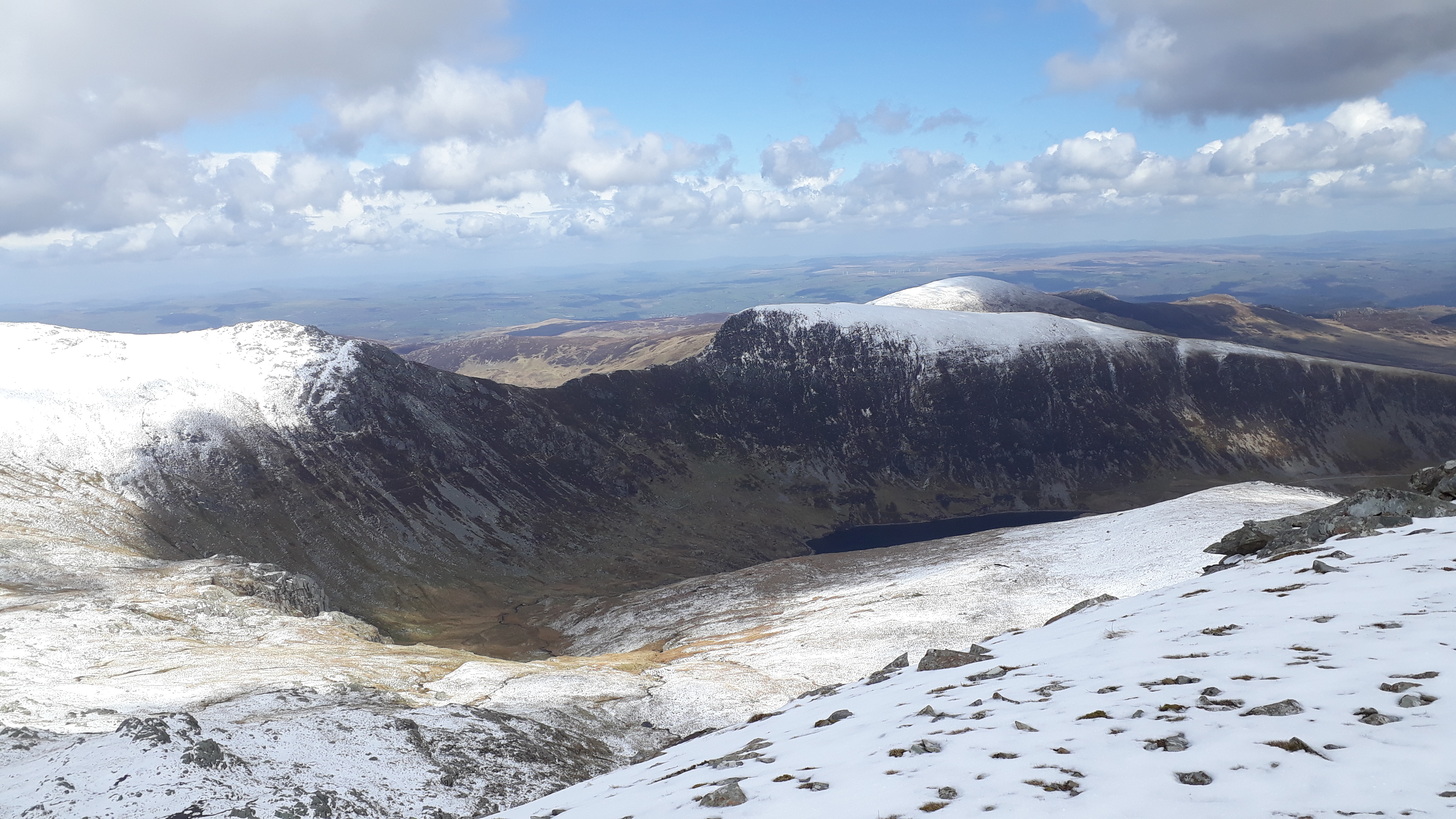 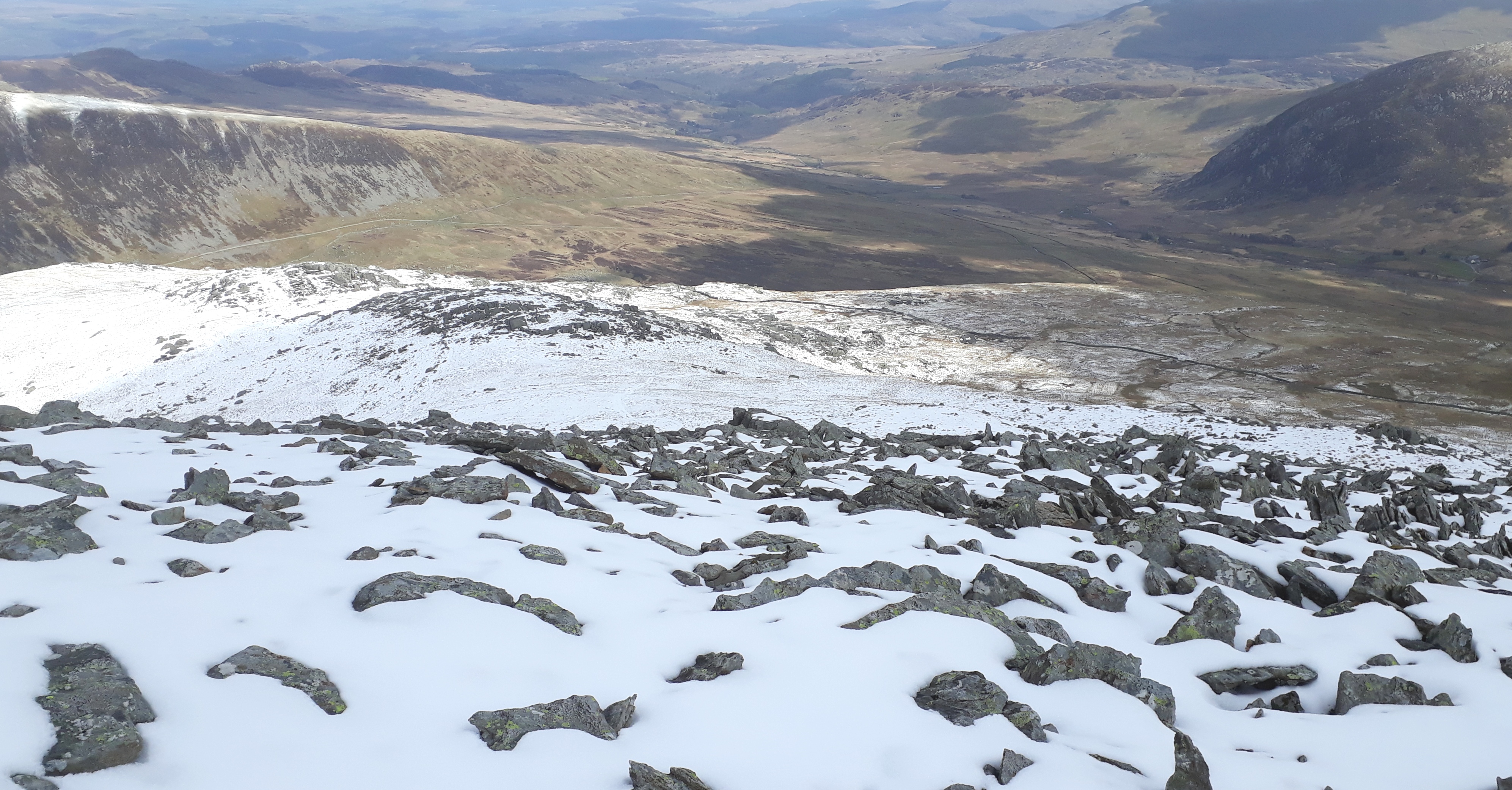 20210506-150634. There's quite an extended boulder field on the upper part of the descent, which given the care needed as a result of the snow covering, makes for rather slow progress. And more than once I'm fortunate narrowly to avoid going A over T... 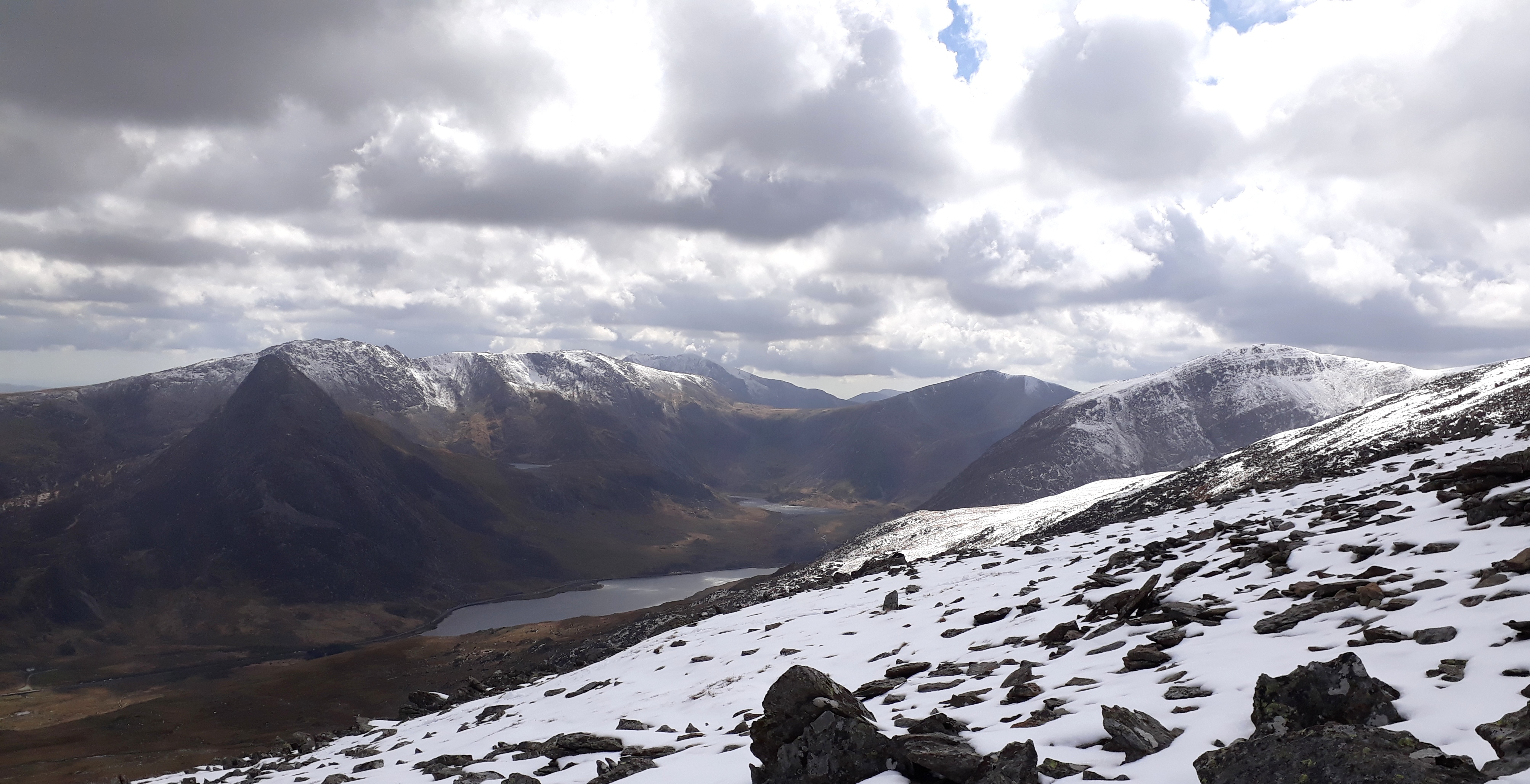 20210506-150721. Once I no longer have to concentrate on not breaking an ankle, though, the familiar but always inspiring views of the Ogwen Valley....

20210506-151914. ...sustain me on my yomp back to the car. Where, in the absence of any establishments of cultural, historical and architectural interest that are open, I make do with a can of Brewdog Nanny State, before heading back home.

A superb day in magnificent conditions, though I have to admit to being really quite bushed. On some occasions the realisation of the gap between what I could once manage in a day, and what I can manage now is more frustrating than on
others! 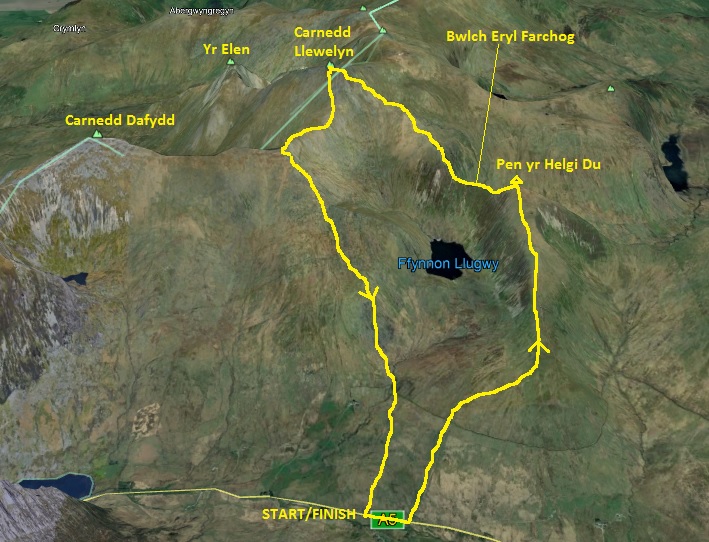 
A Great Whernside and Buckden Pike Round

Farrago on the Hill