I felt it time for another wildcamp, and hopefully a good walk the next day. I knew there was plenty of scope for camping anywhere around Red Tarn, and pretty much onwards up to Crinkle Crags from my walk a few weeks ago, then in thick cloud and rain. The weather forecast was for clearing skies overnight leading to possible ground frost in some valleys and high temperatures the next day. Sounded ideal.
The journey up the A1 and across the bottom of the Dales was a little tedious and with my not-so-early start it was late afternoon by the time I got to Three Shire Stone at the top of Wrynose Pass. With everyone off back home for the day, or indeed the end of their weekend I didn't have any trouble getting a parking space. 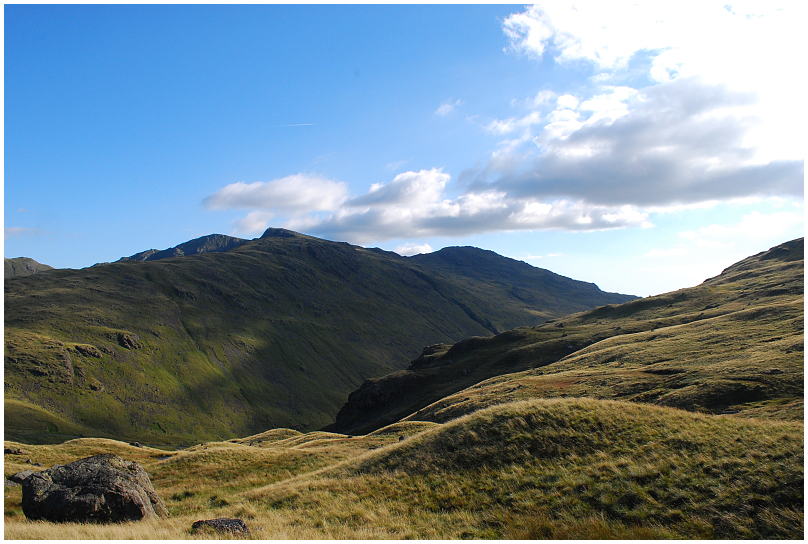 
I stopped at Red Tarn with a view to camping but it was a wee bit early to set up and nowhere really inspired. It looked a bit boggy for a start. So with a little bit self-encouragement I set off, left at the head of the tarn and up the path heading for Crinkle Crags. The evening was fabulous. I really couldn't have wished for better weather. 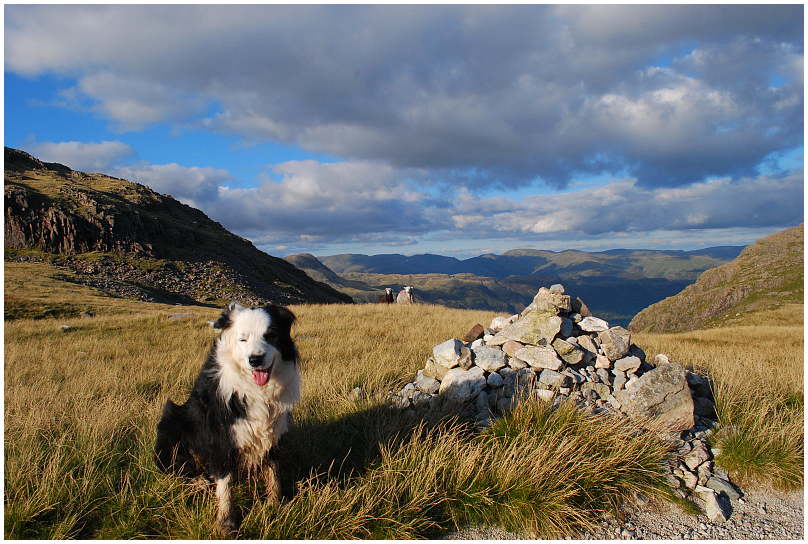 Not the hardest of navigational exercises 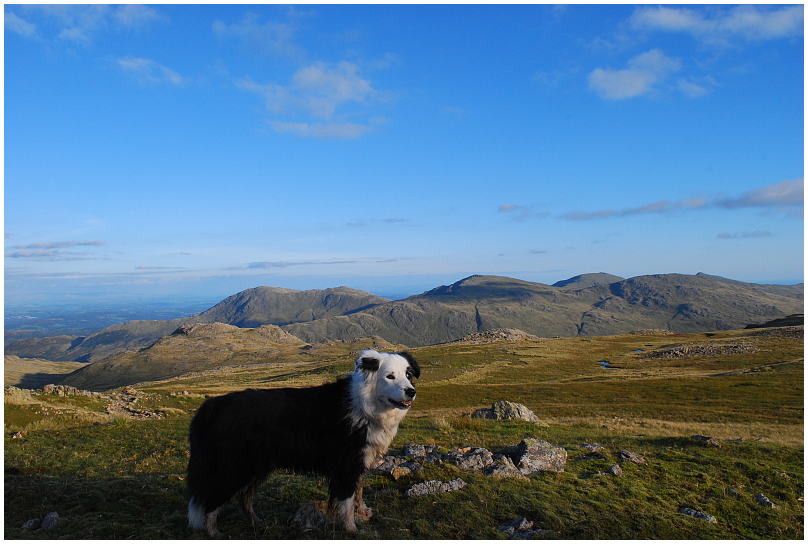 Jake, Dog of the Mountains!

Jake was having a lot of fun. Muddy puddles to drink out of. Smells to sniff. Sheep to watch. My overnight pack felt heavy, despite only being about 10 - 11Kg, I was unused to it, so I was taking my time. No point in hurrying.

Just after Great Knott there is an open plateau area, looks quite boggy, and then before the 834m top there are a few little hollows and knolls. It was on one of these that I decided to pitch my wee hoose. Not quite on a summit, nor hiding too far in a hollow, just a nice place to sleep.

The surroundings were just gorgeous. 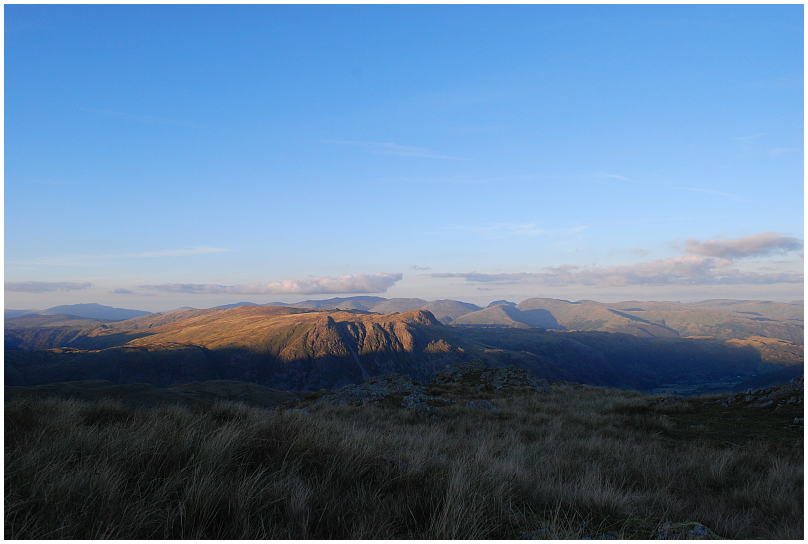 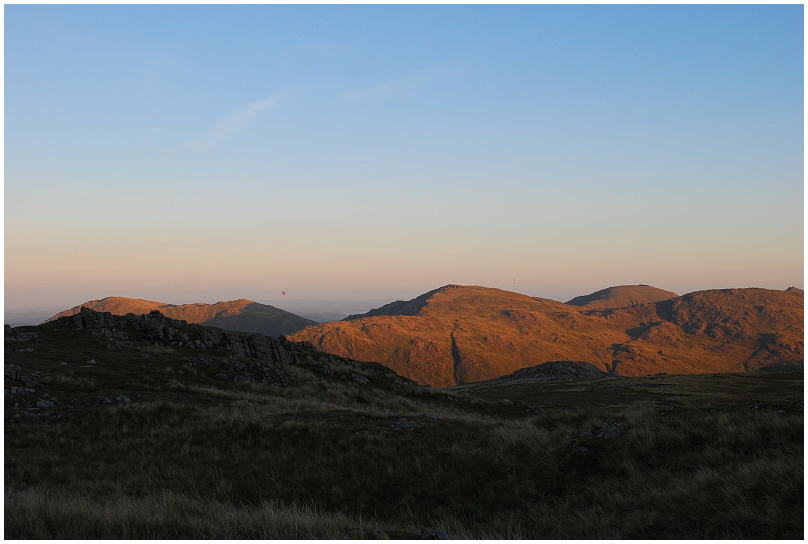 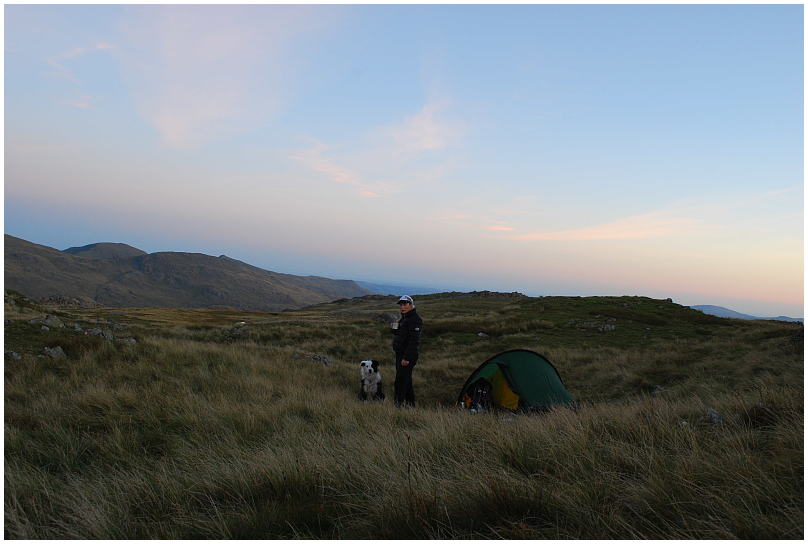 After looking round for a bit, and taking far too many photos, it was time for supper. I had stopped off at my local Tesco for supplies of roast chicken, amongst other goodies, which I shared with Jake and cooked up some pasta.

It was starting to get a wee bit chilly so retired to the tent and wriggled into my sleeping bag complete with my PHD down jacket on still. Cosy, but a bit too warm so I soon ended up taking it off. Dozing until around 11pm I got up for last wees, before really intending to sleep. Lots of stars were out but I didn't hang around as it was pretty cold. 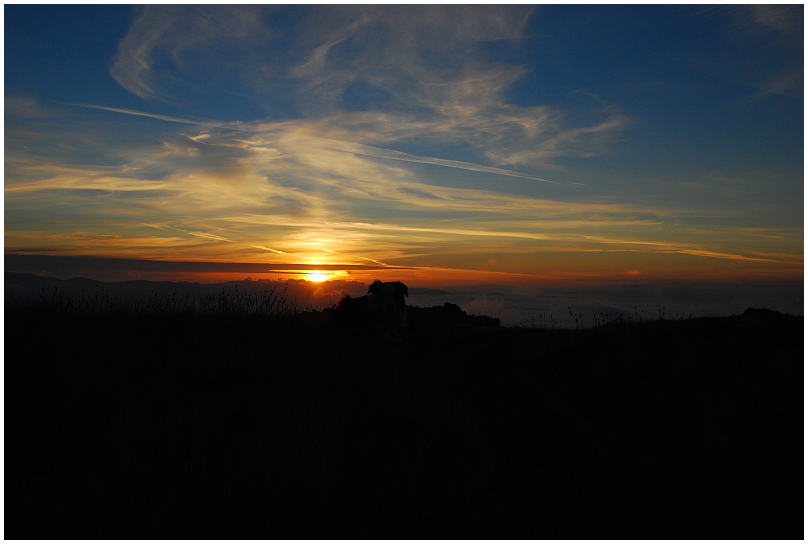 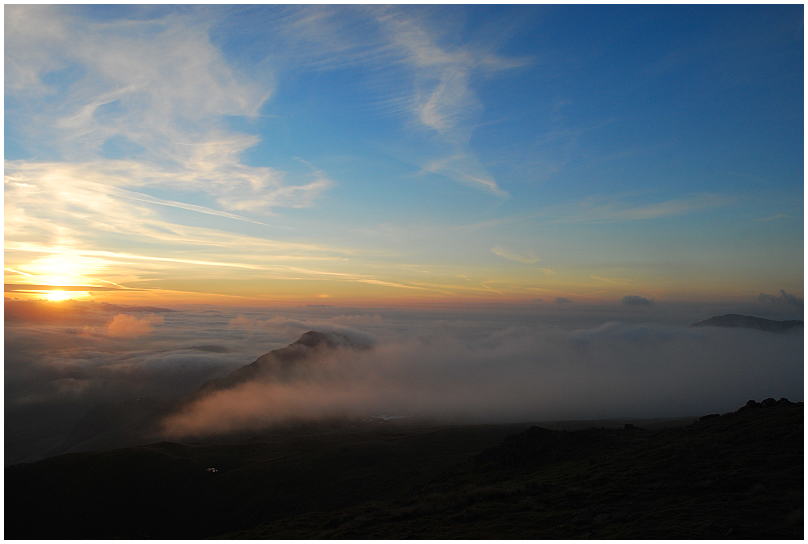 ...and a fantastic inversion. I was above the clouds!

The clouds were racing along the valley floor and spilling up and over the more rounded hills. Some jagged tops were poking out the sea of cotton wool. Fab. More cuppas were consumed before I did much other than take photos. 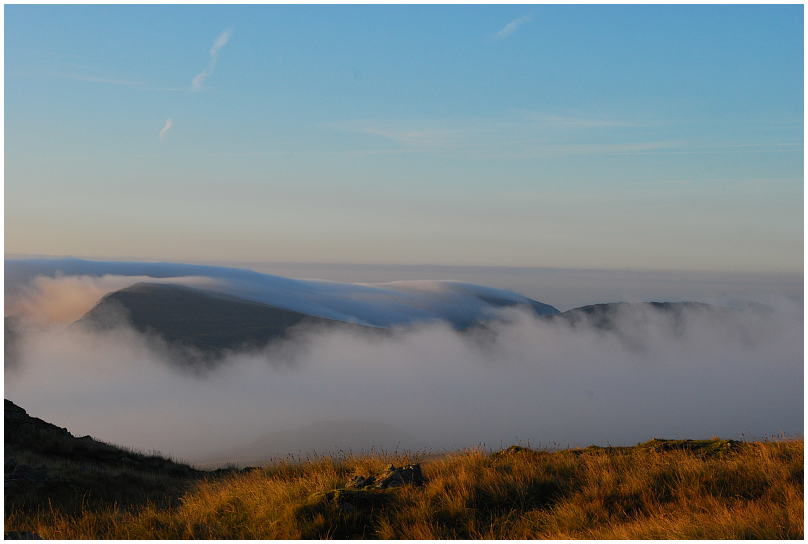 It's probably like being on the summit of a hill in the middle of winter, looking around at the snow capped peaks, watching your laboured breathing slowly catching up, condensing in the cold air. It's no good looking at photos thinking isn't that pretty. You've just got to see it, experience it, for yourself.

So onward. The morning sun was warming up and it promised to be a cracking day. After breakfast we headed on up to Crinkle crags. The cloud harassed us for a time, closing in around us so we didn't always get decent views.

I didn't go over all the Crinkles. I bypassed a couple. Clambering over the boulders with the full pack got to me a little, my knee was fine but my ankle which I'd aggravated in the North York Moors was reminding me of it's presence.

We also bypassed the 'bad step' by traversing left at the base and ascending a loose rocky path. I just didn't like the look of the step itself, it would have been very tricky for Jake, and I didn't fancy the grassy bits to the right of the step as a slip would have been sub-optimal. 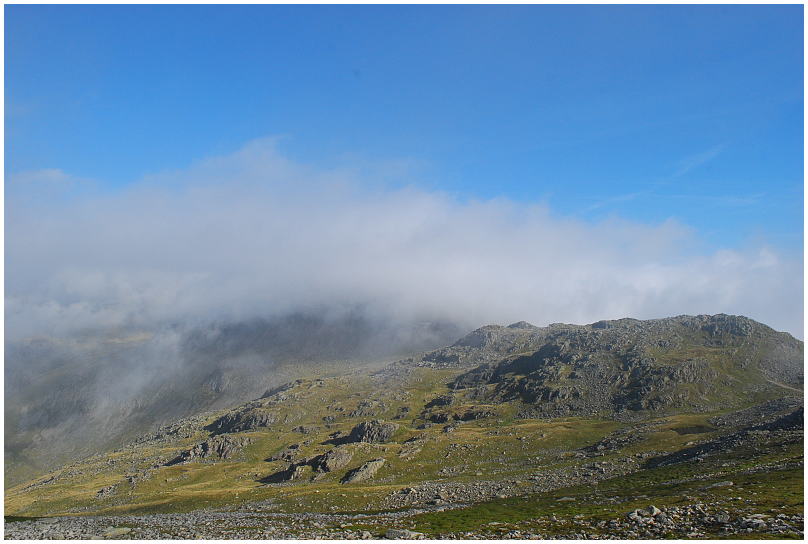 Shelter Crags, with Bowfell in the cloud 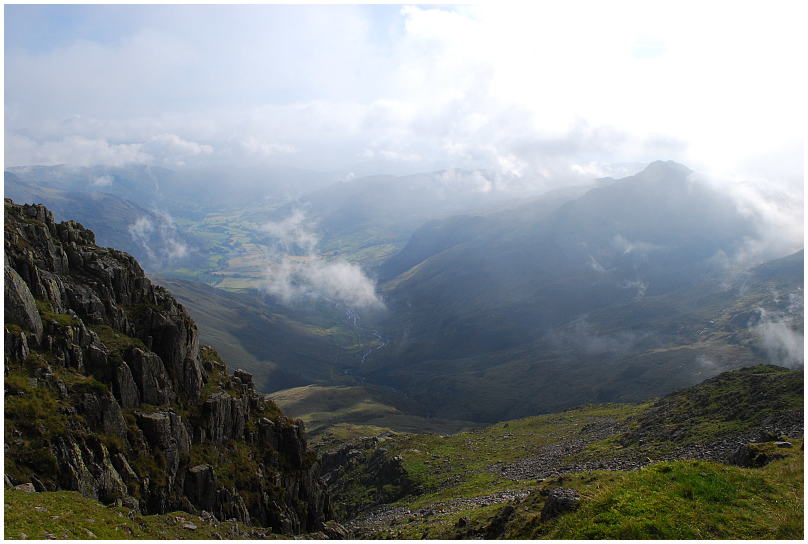 Looking down to, I think, Langdale

I made it over, or round, or whatever, the last of the Shelter Crags, and looked at Bowfell. Now that is a mountain! Rocky path, pointy top, and just above 900m. 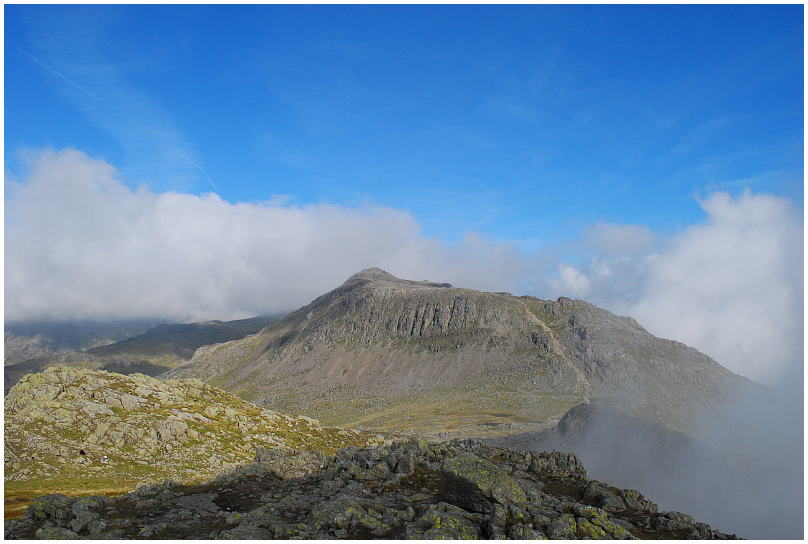 It wasn't too bad descending to Three Tarns and then back to Bowfell, despite the now hot sun. I just took my time and plodded on. Just as I got the summit I spied a string of ATC lads coming up the ridge from Angle Tarn. Chatting to them they had camped overnight at the Tarn, all 20 or so! I felt sorry for one lad who was struggling in the heat, and with obvious fitness difficulties. He had an officer with him giving encouragement, and did eventually make the summit.

I dropped down a bit, away from their noise, before stopping for lunch. 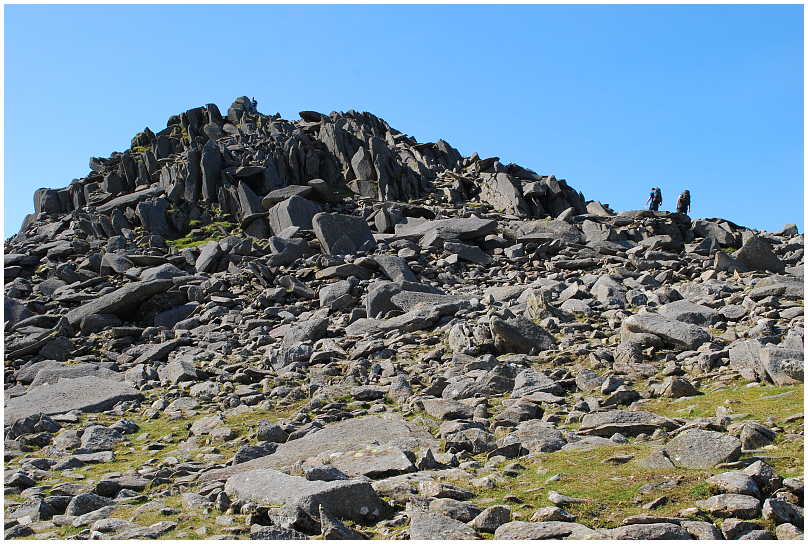 Reading the Wainwright guide he recommended descending to Oxendale via The Band, rather than Hells Gill, and that was pretty much my plan. I like doing a circuit rather than an out-and-back walk, and some of the other options I didn't fancy. So after a bite to eat we set off thatta way.

The Band has nothing nasty, I just found it long, tedious and hard on the legs. I had to take a wee knee break a few times. There were cracking views of Crinkle Gill, Hell Gill and Mickle Door to make up for it though.

I crossed over Oxendale Beck at the footbridge and up the steep path heading back to Red Tarn. 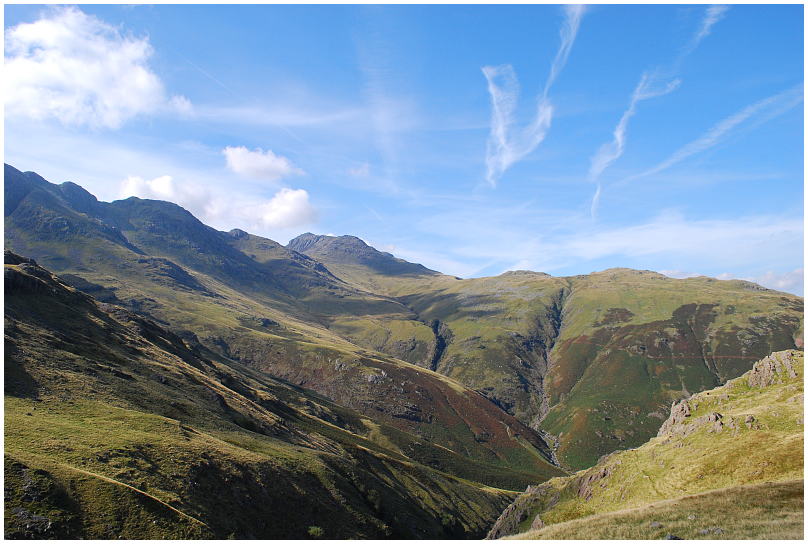 Looking back to Bowfell, The Band, Hell Gill...

It was very welcome relief when the Tarn came into view and I got to the path cross roads. Stopping, I took off my boots and socks and sat on the grass for a while. I'd earned a little break and the last of my Bourbon Creams.

I had contemplated camping another night, however I'd misjudged Jake's food again and not brought enough for him. He had got through 2 normal day's rations and was obviously after more. And I'd not really got enough pasta for me, let alone sharing with him. So, as it was still only late afternoon I'd continue to the car and head home. I had Irn Bru waiting for me in the car, I could hear it calling... honest! Then Fish and chips from Ambleside was the next priority, which I shared a little of with Jake! 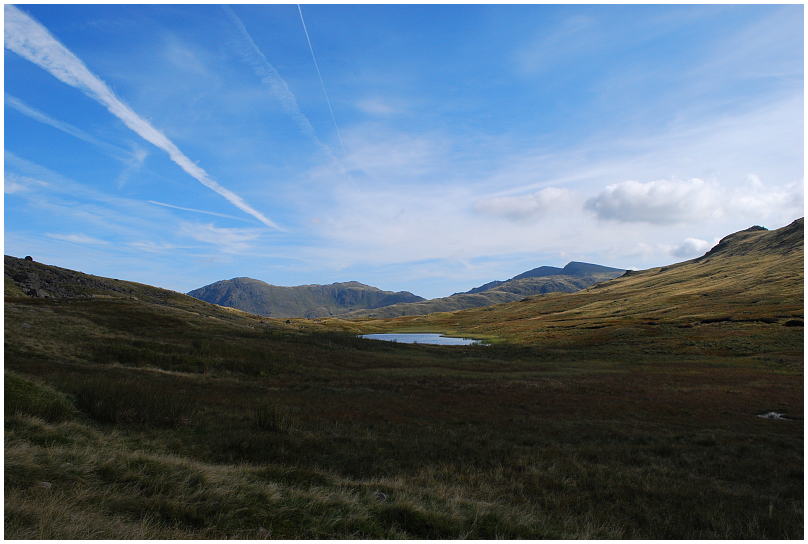