The second week of April saw a short return of winter conditions in northern Scotland. We thought it was a good opportunity to bag An Cabar, a small yet very intriguing mountain situated just south of Loch Fannich. I was told it offered fantastic views to the surrounding higher hills and was worth saving for a snowy day. Well, a bright spring day with melting snow on lower ground seemed perfect for exploring this rarely visited Marylin.
There are several routes from the south, mainly Achanalt and Strathbran lodge, but we opted for a longer traverse starting from the western end of Loch Luichart and following the Fannich dam access track, which is tarmacked all the way to the loch. On the way back, we took the eastern ridge of An Cabar and descended to Loch na Beiste. It is possible to take in the two outlying tops, Carn na Beiste and Meallan Buidhe, but we didn't bother.

Track_AN CABAR 16.9 KM.gpx Open full screen  NB: Walkhighlands is not responsible for the accuracy of gpx files in users posts
There were two other caes parked in the layby next to the start of the track, but we never saw anybody apart from an estate walker driving up the road in his four wheel drive. Generally, this is a quiet area, some folks use it to access the southern end of the Fannichs but obviously it wasn't the time of year for multiday traverses.
Eager to go: The morning was nice and sunny though cold; we enjoyed walking along the track. About 2km into the walk, we spotted a bridge over River Grudie - this would be our return route: Carn na Beiste and Meallan Buidh from the track to Loch Fannich. Loch na Beiste is located on the bealach between he two tops.

We saw plenty of deer, mostly busy stuffing themselves with hey and granulate provided. I guess in autumn this is pure stalking country - the deer looked well fed

Past Aultdearg, it was even more wintry:

As we neared the loch, I was more and more fascinated with the southern flanks of An Coileachan, Garbh Choire Mor in particular. We had already climbed all the Fannichs, but this side looks like a good alternative route for a repeat visit. The idea at the moment is to climb the northern spur of Garbh Choire Mor to An Eigin and then up to the summit, descending via Coire nan Laogh. Once the snow is gone, we'll think seriously about this option. At the moment we should concentrate on much easier but just as entertaining climb up the NE side of An Cabar. We used the faint ridge in the middle of the photo below:

We left the track about 500m before the hydro buildings and started the 300m climb to the summit. Very quickly, views began to open up, especially west along Loch Fannich:

The southern wall of An Eigin, Faire nam Fiadh, and the loch below:

At some point we spotted a flock of geese heading north - the obvious sign that spring has arrived (despite the snow around us): 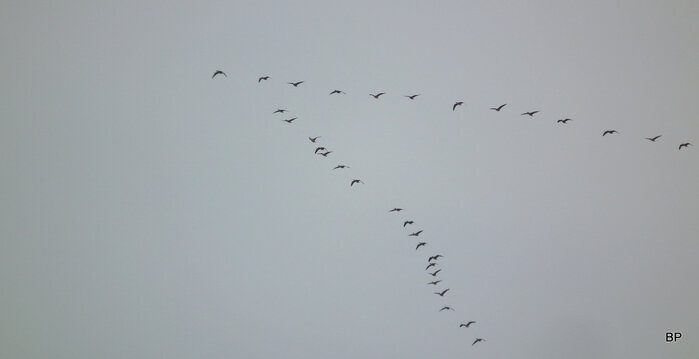 The raising ridge is dotted with rocks, some good pockets of easy scramble or simply a great playground for a hill-hungry cat Looking down to the eastern end of Loch Fannich and a strangely shaped cloud above Beinn Liath Mhòr a'Ghiubhais Li: One of the so-called pockets of easy scramble Me avoiding the scrambling section by skirting it on snow-cowered heather: Weather was actually improving and with the cloud moving away, the views were now framed in blue sky. Fantastic light for photos, so we took time going up, looking for good "snapping spots". 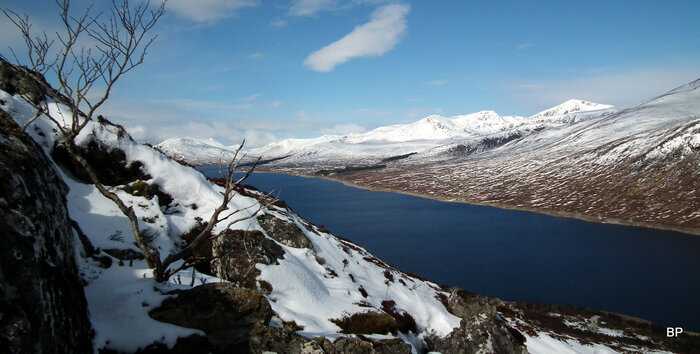 The eastern end of Beinn na Ramh, a Graham we once climbed from Kinlochewe in winter conditions:

The final bit to the summit - even more fun with the rocky crest: Kevin is usually more dignified in his behaviour when hillwalking but even he couldn't resist a smile today... Following me up the steeper section with the superb view across Loch Fannich behind: Honestly, I couldn't believe how good a viewpoint this hill is. So rarely visited as it is only a Sub, but it offers pure mountain p**rn to hill connoisseurs

On the top of the rocky crest, happy to be up another hill The trig point is only a few metres west from the upper end of the line of rocks - and what a place to tick off our 52nd Sub'2 Marylin.

Lucy's 20th Sub, with the panorama of Loch Fannich behind: The best vistas are to the west and north... ...but also south to the less known side of the Strathconon Corbetts:

The mountains of Strathcarron:

For the descent route, we picked a long, gentle eastern ridge of An Cabar, which proved to be easy enough ground to cover, apart from a few rocks just below the summit (they can be bypassed to the right on less steep terrain): The recent snowfall made the landscape more beautiful, but also covered half-frozen puddles and wet holes. One of such traps happened to be right in my way, oops, before I realized, cold water was pouring into my boot

Luckily, my leg wasn't stuck so I pulled it out of the hole in a sec, but it was too late.
I remembered one of snooker commentators saying "there's always a gap!" each time the player missed a shot. In my case, the commentary would be "there's always a hole!"

Kevin on his way to Loch na Beiste: We passed the loch to the left (northern side), there is a faint path (probably just a deer track). On a different day, we might have added Carn na Beiste, but with an extra loch in my boot, I said no, thank you

Carn na Beiste from below:

We crossed Allt Loch na Beiste (which is no more than a small burn) and descended the wet, bumpy ground towards the bridge we had seen earlier. Kevin was so fed up with the "mushy tatties" experience, that he suggested we could use the forest track below Meallan Buidhe, so we aimed for the edge of the fenced off area, hoping for a gate. We didn't find one, but the corner of the fence was strong enough to climb over it without destroying the whole structure

On the other side, it was a very easy walk down the forest track to the bridge and the main road along River Grudie.
Looking back at the lower tops of An Cabar from the track in the glen: A lovely hill, especially in half-winter conditions, amazing views and potential for adding extra tops if one wishes. The descent route might be wet but honestly, find me a Scottish mountain that isn't

One more TR to come from yours truly, this one describing a less frequented route up Loch Lochy Munros. Watch this space.
Click to mark this as a great report. Register or Login free to be able to rate and comment on reports (as well as access 1:25000 mapping).