The secrets of Caithness

God Almighty, it's been nearly 3 months since my last report on WH but do not worry - Black Panther is still out there, lurking around the north of Scotland, bagging hills, searching for plane wrecks, trying new routes, meowing on summits, doing all the things panthers like doing

My silence was just a result of a strange mental blockade: I enjoyed my outings so much but found myself unable to write up my stories. Might have been the stress of the current situation "on the eastern front" as Kevin calls it. It took time to process it all and just grow resistant to the constant flow of information, get used to grim war news on the front pages of all Polish media. I might have lived in UK for nearly two decades but I still keep up to date to what's happening in my homeland and in recent months I struggled to process the new reality. The Scottish spring has come and gone, the first days of summer have arrived and now, freshly after two weeks of hill adventures, I feel my batteries are recharged and I can go back to posting. My TRs may not come in chronological order, so apologies for that, but I have a backlog of over 30 trips including some from March, done in full winter conditions... It's bonkers

Might take a couple of months to catch up, so bear with me, please

First, a low level trip to the north-east, a report which I began composing in April but then just saved the draft and didn't return to it until now

It was one of the excursions we went on during our March hols. The day was very windy, too windy to venture on higher ground, but the Caithness coast looked dry in forecast, so we decided to go there and visit a few archeological sites we had on our list for a while.

The first of them is the Ousdale Broch - recently excavated and now available to the public - the walk description is available on WH.

our_route.gpx Open full screen  NB: Walkhighlands is not responsible for the accuracy of gpx files in users posts
With the raising prices of petrol it is good to have a hybrid car! Taylor parked at the new car park, dedicated to the broch walk:

The entrance gate and path leading to the ancient monument: The path leads past the remains of 'Borg', a post-Medieval clearance village: Ousdale broch from the approach path: Details about the broch history and excavation can be found on Caithness Broch Project webpage. What a fantastic job was done to bring this ancient monument back to life an make it available for all of us to enjoy!

After seeing so many old buildings, precious gems of architecture, left to rot and fall apart, it was so exciting to visit one so lovingly restored. Call me silly, but it just gives me back my faith in humanity According to CANMORE database:
"Ousdale broch is a well-preserved second phase broch measuring 50ft overall diameter and 24ft internally with walls 14ft thick at the entrance and 12ft on the opposite side, and 14ft high. The entrance passage, in the SW, is checked for two doors. Above it is a gallery, and a guard chamber is on its SE side. In this was found a 2ft square cist containing a cremation. A is in the wall entered from the courtyard 3ft from the entrance passage, and further round another entrance leads to a stair to a gallery above. At a height of 8ft from the floor is a scarcement ledge with corbel stones protruding at intervals of 8ft all round."
The ground level of the broch is available to enter, with two small chambers within the thickness of the walls, which of course, I didn't shy from exploring... Panther trapped in a hole The staircase within the wall structure which originally led to the upper levels: The entrance seen from the inside: If you are interested in ancient monuments, this broch is a must-see. easy to find, located so close to the A9 just N of Helmsdale.

Just up the road from Ousdale Broch, one can visit the remains of Badbea clearance village - we had done it in 2019, highly recommended!

Our second target was The Hill O'many Stanes, an intriguing set of over 200 small standing stones, arranged in 22 not quite straight rows aligned north-south. Until today, it is not clear what was their function.They are believed to have been erected 4000 years ago, but even that is just an estimate as little real dating evidence has been found for the stones. They could have served a religious or ceremonial purpose or an astronomical observatory, but no one is really certain. A fascinating place to visit and wander about for a few minutes... It was still quite windy and hoodies proved necessary to keep warm: The stones seen from the entrance:

The third site to visit on our little trip to the north was the castle of Girnigoe-Sinclair. A popular spot for ruin enthusiasts.

our_route.gpx Open full screen  NB: Walkhighlands is not responsible for the accuracy of gpx files in users posts
I have written a trip report about this place in the past (see HERE for details). Back in 2010 when we visited this place for the first time, it was only partially accessible (indeed, we climbed over a barrier to have a peek inside). Now, twelve years later, it is still not fully open and I assume it probably will never be unless some very substantial work is done on the main hall tower, which as of today is closed for public and heavily scaffolded: But even with only a small part of the building accessible, it is still worth a visit, especially due to its superb location on the sea cliffs and close to some impressive sea stacks. Shame the day was so windy we could hardly stand up. in better conditions we'd probably wander more along the coast, but today it simply wasn't the weather for it.
A set of sea stacks next to the castle: The ruins seen from the approach path: This is how the castle looked when still complete: We spent some time lurking in the ruins, taking photos and trying to stay on our feet The main hall tower from the beach below: Inside the western part of the castle: The ruins seen from the west: The wind was getting worse but we still had one more site to visit. Originally, we planned to do the whole Keiss Castle to Nybster trail but in given conditions this would not only be unpleasant but also dangerous (who fancies being blown off the cliffs

). But since we were already that far north, we decided to at least visit the broch.

our_route.gpx Open full screen  NB: Walkhighlands is not responsible for the accuracy of gpx files in users posts
When we parked in the car park off the A99 just north of Keiss, weather was so rough I struggled to open the car door! The sea was mad as hell! We took the path along the coast to the small memorial: The Mervyn Tower (monument to Sir Francis Tress Barry, who first excavated the Nybster Broch in 1900). One of the small decorative sculptures on the memorial, this one in shape of a sheep: According to CANMORE database:
The first excavation in 1900 (...) revealed neither guard chamber nor mural cells. It has in internal diameter of 23ft and a wall thickness of 14ft. In 1910 the maximum height of the walls was 5ft 3ins. The broch is defended by a possibly later forework and the whole is fronted by a ditch about 20ft wide which cuts off the promontory on which the broch stands. To seaward of the broch practically the whole promontory is covered by well-built out-buildings, oblong, circular, and irregular in plan. The broch with its outbuildings is a fascinating place to explore, shame it was so windy... This is the most complicate broch we have visited so far, I wish it had survived to a greater height... 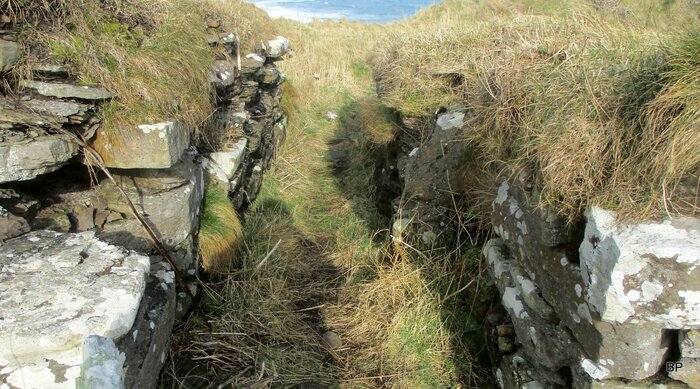 On the walk back we descended to the beach, to admire the cliffs from below (the tide was out, thankfully!):

...and visited the jetty: As we drove back to Beauly, even stronger wind and rain arrived from the south, but my main concern was the storm approaching from the east... I was too afraid to switch on the news

Will the sun shine again? I kept asking myself, what if this mad storm reaches Polish borders? How many days till Kiyv falls?... My thoughts at that time were as dark as the depths of the North Sea. I needed a miracle. I desperately needed an exhausting trip to the snow-covered tops to sweat out my frustration and unleash the mountain spirit in me. I have already written this somewhere else, but.. I know, you will not understand what hillwalking is until you feel the mountains in your bloodstream. That's what I wanted on that dark March afternoon. And I got what I needed very soon. I will tell the story in my next report.
#lovenotwar
#EmbraceUkraine

So small yet so big

The last of Tain Subs

In the other Strathcarron

The Eagle has landed

A glimpse of winter above Tain