Originally my plan was to drag Kevin out to Ardgour to do either the Rois-Bheinn round or Beinn Odhar Bheag and Beinn Mhic Cedidh circuit. Both routes with multiple tops and a lot of ascent over rough terrain, but we enjoy a challenge. Last year we climbed the Garbh Bheinn circuit (including two Grahams) and we absolutely loved it. But Kevin's blistered feet voted against a big day so all I could do was suggesting something a bit easier. A single Corbett with a steady ascent along a long, nice-looking ridge? Sure, why not!

Càrn na Nathrach aka The Hill of Adders turned out to be an adventure we never expected from such a friendly-looking mountain. Needless to say, the "friendly-looking" part never materialized

The ridge was rough, overgrown and neverending. We never met any adders but saw dozens of lizards, proving that Càrn na Nathrach is a good place for spotting reptiles. From my own experience with European adders, they are extremely shy and timid, slithering away at the first sight of humans. Of course, they will defend themselves when attacked, but the myth of "vicious viper" is just that - a myth.

Aside from the reptiles, the ridge is a real challenge mentally (or at least it felt like that for me) due to the countless false tops. It would be a mind-breaking experience in cloudy conditions. We were glad we tackled it on such a lovely, sunny day. Our route followed the WH instructions. We considered descending south into Gleann an Dubh Choirein but the option didn't look inviting, so returned the same way, enjoying the views for as long as possible.

Track_CARN NA NATHRACH 18.6KM.gpx Open full screen  NB: Walkhighlands is not responsible for the accuracy of gpx files in users posts
We started from Loch Doilet, where we found a small parking area on the edge of the forest. The initial stage of the approach was easy on a good track. Soon we saw the western end of our target ridge and our appetites grew bigger! The house of Glenhurich is currently undergoing a renovation - I think it would be a superb location for holiday home!
Having crossed River Hurich, we continued on the forest track for a short distance, looking for the start of a path leading through the trees onto the crest of the ridge. We located it eventually, though it is not easy to spot: WH description describes the path as "uninviting, overgrown and boggy" and I will not disagree - the first 50m of ascent through the dense forest is a real nuisance: It gets a bit better higher up... ...and once on the ridge proper, at least we could see where we are going - or so we thought

What we saw in front of us was just the first hurdle on this long march up. We were actually looking at the first of many false tops, this one just over 500m high: View west down the ridge with Beinn Resipol prominent on the horizon: Even the lower parts of the ridge are dotted with rocky outcrops, perfect for fun and games if you fancy scrambling: 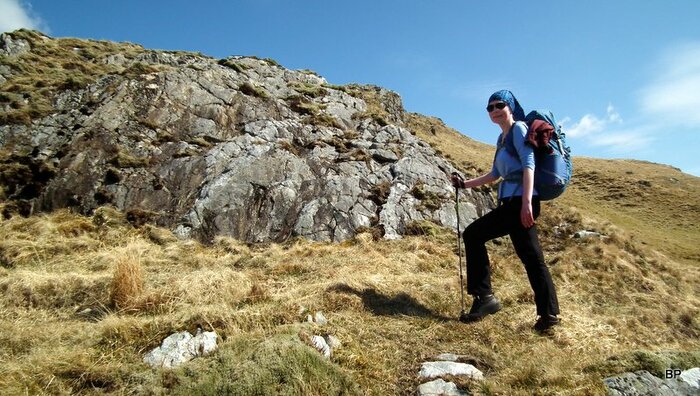 We arrived on the first top (517m) only to realize that we still had a long way to go... A short refreshment break and we were on our way again... The second top (602m) gave us the first sight of the summit, which looked miles away... You must be joking, I said! Heading for the next obstacle: I remembered from WH description that at some point we should expect a deer fence across the ridge, and we found it... as well as an ample hole in it, probably made by walkers

Negotiating it required some skill and grace. Kevin lacked the latter but had no problem squeezing through: Just past the fence, we met a wall of silence... ...but I soon discovered that the devil is not as black as painted, and an easy line up this section can be followed with only minor scrambling necessary: There are two more false tops but no more difficulties - after a long wander along the ridge we were closing on our first new Corbett since August last year! Weather was holding nicely and from the final stretch of ascent Kevin could take some superb panoramic snaps. generally, views on the way up Càrn na Nathrach are restricted by the two higher ridges to the north and south and only having gained some height, we could appreciate vistas from this Corbett: First new Corbett in 2021! At last! We had done a couple of new Sub'2 Marylins, but this was the first "proper" mountain ticked off this year. Fingers crossed it won't be the last!

We spent some time on the summit as conditions were good, enjoying the views of Ardgour and Moidart. We still have many listed tops to climb here, including three big multi-Corbett rounds. Hopefully summer will allow us to visit at least some of them. For the time being, we had to satisfy ourselves with a single "tick" but considering Kevin's blistered feet, it was still a big achievement.
The way we came up (and the return route, too): 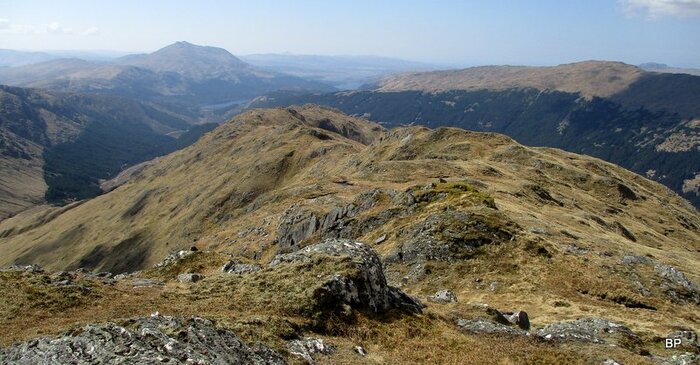 Càrn na Nathrach is not a very well known Corbett, it has only 268 logged ascents on WH. For comparison, much more popular Garbh Bheinn has 735. The Adder Hill is indeed the 10th least climbed Corbett on the entire WH list, which I feel is a bit unfair. Such a superb mountain and a tough one, too. I know it is located in the bl**dy middle of nowhere but so worth saving for a good day!
Shortly after leaving the summit we met another couple going up, had a quick chat. They said they were also WalkHighlanders - I bet they recognized Lucy

We shared our sentiments about "the ridge that never ends" and the annoying false tops. To be honest, on the descent the false tops didn't feel so annoying any more, but it is always easier downhill than uphill

We found our way down the scramble-ish section, hardy even noticed it this time

Kevin walking down the neverending ridge: 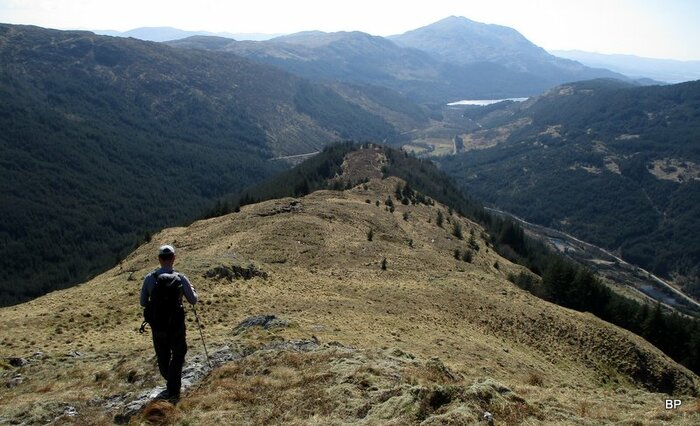 We returned home after a long drive (over 2 hours to get back from Ardgour but well worth it!) and having found out that weather forecast for Monday was sh*tty, decided to take a day off and do some gardening. On Tuesday, conditions improved but it was still a windy day, too windy to brave any big traverses, so we visited a certain plane crash site, one we had in mind for a long time. We took so many photos, I struggled to pick the best ones for my report: the story of the lost jet fighter. Watch this space for my next story!
Click to mark this as a great report. Register or Login free to be able to rate and comment on reports (as well as access 1:25000 mapping).


Bonkers way up An Coileachan