Carn nan Gobhar is usually climbed as a starter to the Mullardoch round and as such, never fully appreciated. Most walkers hardly notice it on their way to much more attractive Sgurr na Lapaich, but I always felt that Carn nan Gobhar deserved more thorough exploration. It is close enough to home to consider it local and not technically difficult so it can be done in winter conditions. Somehow by the time we got around to doing it, most of the snow has melted. This allowed us to do a bit of easy scrambling on Creag Feusag. Our circular route was inspired by Malky's report, though I was told that following his footsteps wasn't always a safe idea

What we ended up doing was basically a circuit of Coire an t-Sith over Creag Feusag, Creag Dubh and Carn nan Gobhar:

Track_CARN NAN GOBHAR 15.1KM.gpx Open full screen  NB: Walkhighlands is not responsible for the accuracy of gpx files in users posts
Starting from the parking area below Mullardoch dam, we walked on the new hydro track for a short time... 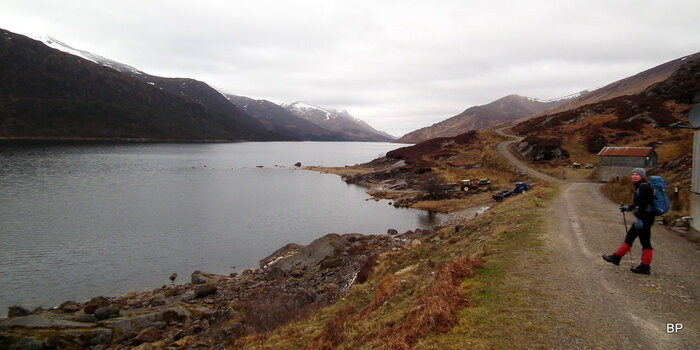 ...before leaving it to face the steep slopes of Creag Feusag. On the first impression this end of the ridge looks impregnable, but on closer inspection, we spotted a shallow, grassy gully which, we hoped, could be followed up:

Of course, there were some obstacles to overcome, but nothing a hill-hungry panther couldn't handle: 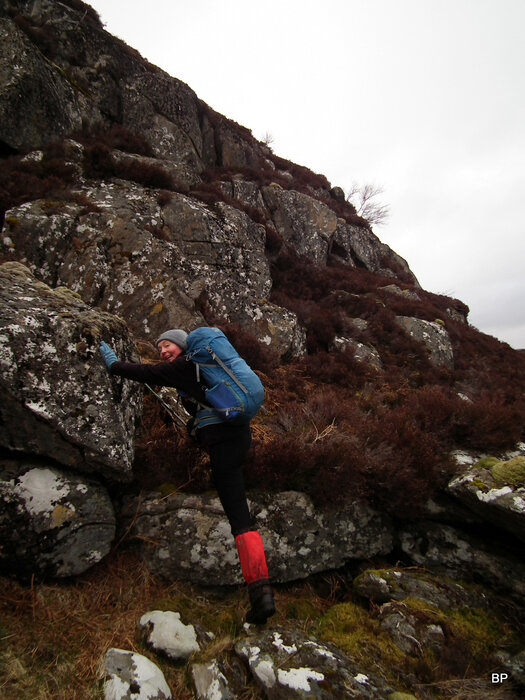 Not a four-paws experience, but it was close 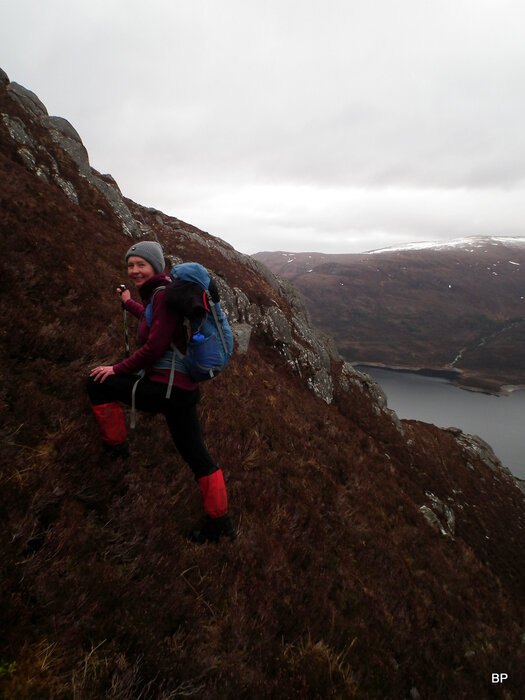 After about 200m of steep, overgrown slopes, we emerged on gentler ground, but it suddenly became more rocky:

Looking down to Mullardoch dam: 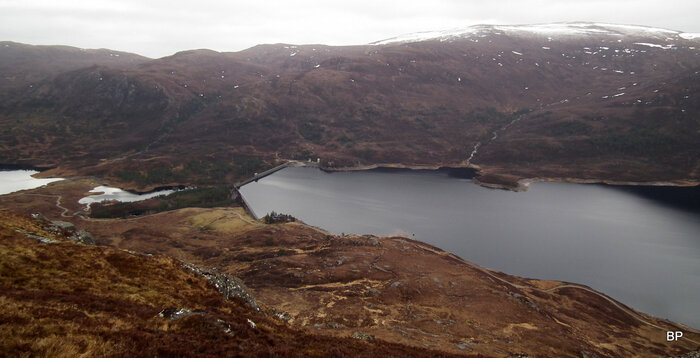 The upper reaches of Creag Feusag are full of rocky surprises, little pockets of scrambling and rock-hopping

To be honest, it was hardly scrambling at all, but I enjoyed grabbing a rock here and there...

The ground was still a bit wet so it was more about picking the right tuft of grass than any technical moves. I couldn't curb my inner madness though 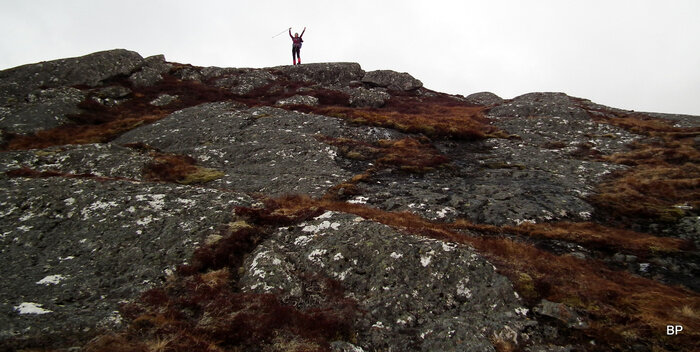 Another section of easy scrambling:

Higher up on the ridge we met a pair of ptarmigan. They are currently changing their plumage to the summer outfit:

The ridge becomes easy and nearly flat at the height of 780m, but the true top of Creag Feusag is still another km away. We could see the summit cairn from the upper end of the rocky section:

The surrounding area was dotted with strangely shaped rocks, including this outcrop:

Kevin striking a pose. He had his first covid jab two days earlier and was still suffering from mild side effect of the vaccine. I noticed that he was a bit slower than usually, but it's a small price to pay for the peace of mind. In his job, it is virtually impossible to avoid contact with other people, so I'm glad he's at least partially protected. The summit of Creag Feusag: 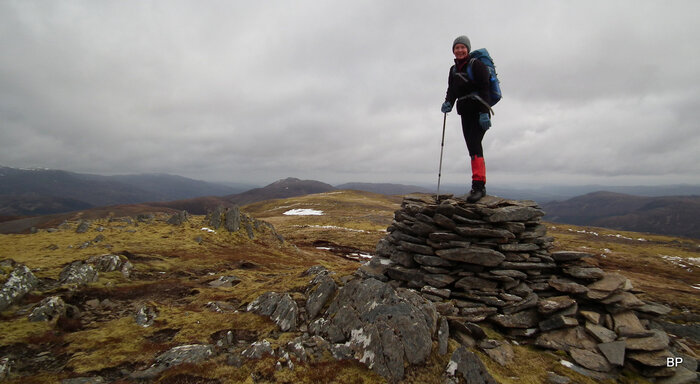 Lucy admiring the views; despite the grey cloud above the day was decent, not too cold and moderate winds. The original forecast was for sunny spells in the afternoon but this never happened. Well, Met Office doesn't always get it right

From Creag Feusag, the rest of the traverse is a delightful walk on a wide ridge with fantastic vistas. Shame about the gloomy weather, but even with high cloud spoiling the light for photos, it was still enjoyable.
Our second target: Creag Dubh:

On the col with a lengthy name Bealach na Creige Duibhe, we encountered a stone wall. It cuts the col in half so obviously it's some kind of border (a boundary between two estates perhaps?). The strange thing is, the wall can so easily be omitted (or even jumped over if you are a stag) so it just makes no sense. Reminded me of a similar stone dyke on Suilven. 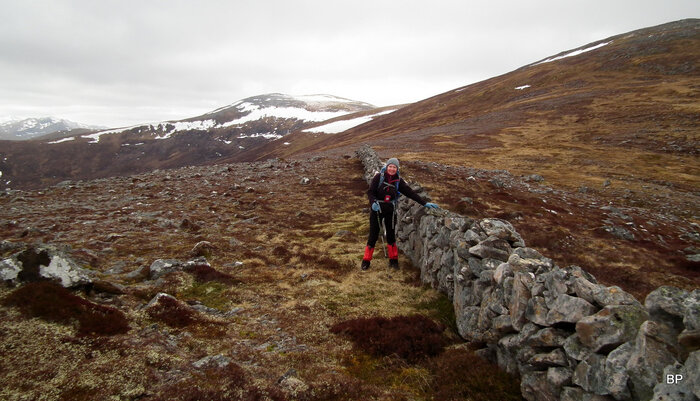 Kevin just joked "Looks like Hadrian was here on holidays"

Looking back at the wall from half way up Creag Dubh, the wall visible in the foreground:

We took time traversing to Creag Dubh, where we planned a longer break and a hot cuppa. Càrn nan Gobhar is close, only across another bealach with less than 150m of ascent (Creag Dubh is not a Munro or a Marylin, just a Munro top) 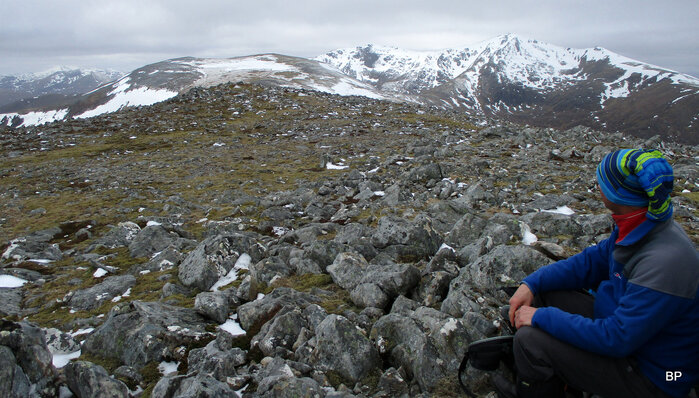 It might only be a mere top, but Lucy still posed proudly on its large cairn. Funny how some minor tops have much bigger cairns than their main summits: 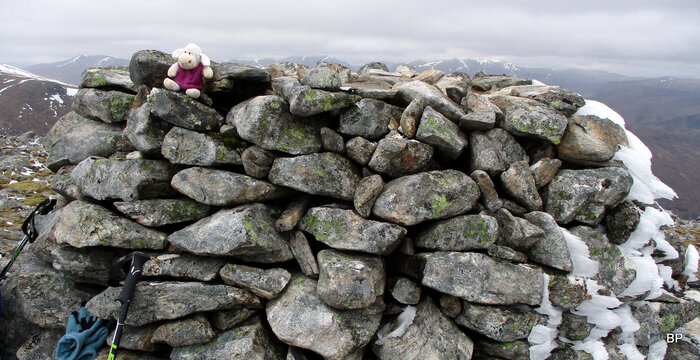 The eastern end of Loch Mullardoch from Creag Dubh:

View due east along Glen Strathfarrar: The second bealach was surprisingly windy, I had to swap my thin gloves for my ski-winter ones (thankfully I took both pairs), but the traverse was very easy, pleasant walking on stony ground and a few patches of snow.
Creag Dubh from the Munro summit:

We were so happy to reach the top of our first Munro this year! Not a new one - these are few and far between now with only 22 to go - but at last something above the magical line of 3000 ft! 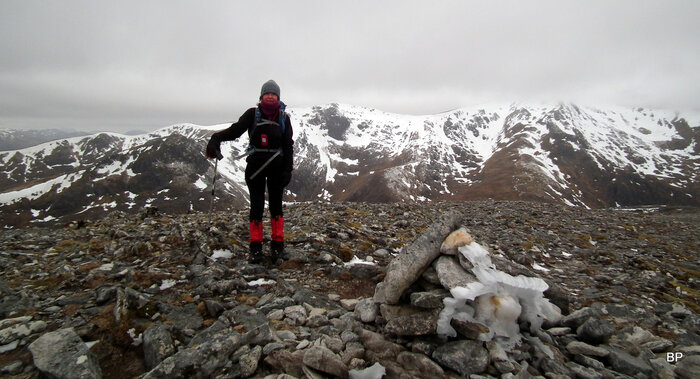 The best views were of course to the west, to the mighty Sgurr na Lapaich, its east face still in full winter conditions (would be even more snow now after the fresh snowfall last week). 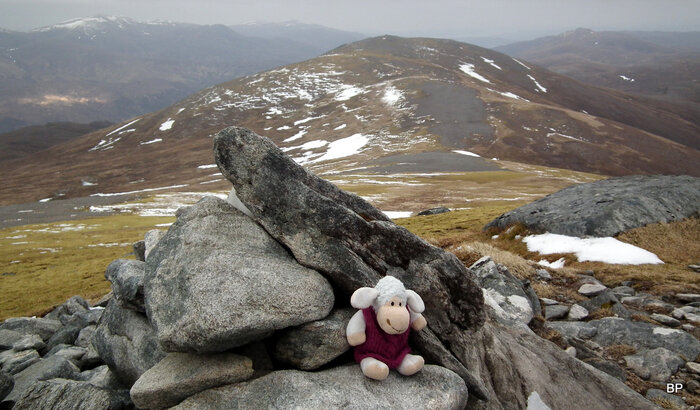 The summit was windy so after a short break for photos, we descended south to complete the circuit around the corrie. Originally, we planned to go down over Mullach na Maoilie, but I spotted an easier route dropping into Coire an t-Sith, which is can be seen to the left of this photo: Kevin remarked that we'd still have to cross Allt Mullardoch down in the glen, but I spotted a white patch which looked suspiciously like a bridge, so we took the chance and descended the grassy slopes into the upper corrie. It was generally easy going, a few small streams to hop over and some wet ground lower down, but definitely less steep and mucky than the usual descent straight to Loch Mullardoch. Recommended if your knees need care. 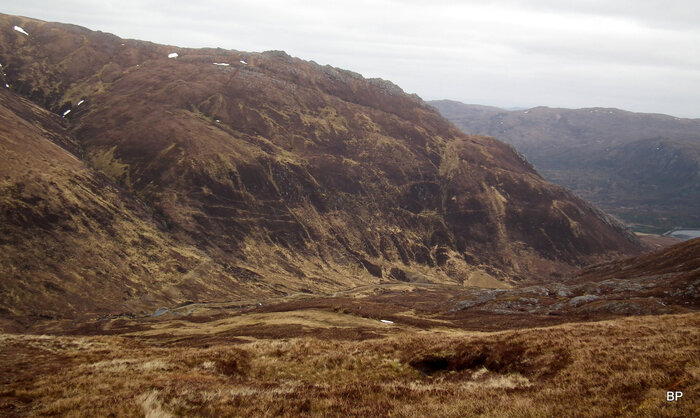 And guess what - the white patch turned out to be a proper bridge! The track in Coire an t-Sith has been upgraded to give access to a small hydro dam (them dams pop up everywhere these days!) so from the bridge it was a quick march down to Loch Mullardoch and then back to the big dam. Kevin was tired towards the end and by the time we got home, he said he felt totally knackered. I guess the covid vaccine weakened him for a short time. Despite that, we still enjoyed this circular walk very much, calling it "the mini Mullardoch round". If you want to do justice to Càrn nan Gobhar, this is the way to go.

Easter Saturday was forcast to be bright and sunny, so we managed another hill the next day. I didn't want to torture poor vaccine-weak Kevin to do another multi-top round, so we visited a popular half-day Munro. TR to come soon.
Click to mark this as a great report. Register or Login free to be able to rate and comment on reports (as well as access 1:25000 mapping).