The shape of water

In our quest to do a second round of Torridons, we are now close to the finish line, with only 7 listed hills left. In my opinion, ANY mountain in Torridon is worth repeating, even if using the same route. Many hills in this area can only be traversed in one way (Alligin, Beinn Dearg) and for most of them the full traverse is the best possible option, which cannot be beaten. Such is the case with Sgùrr a'Gharaidh, one of the forgotten gems of the western coast. Situated so close to the Applecross cliffs, it serves as a superb viewpoint to Beinn Bhan corries. It can be easily "bagged" by a simple up-and-down from the west, but we always wanted to explore it more and in 2016 we traversed it from east to west. It was a fantastic day, one of the best Graham days in my life. There was simply no way to better that so for the second visit we decided to repeat the same route. This involved climbing up the infamous "poo gully" but I was ready to sacrifice myself for the greater good

Our route follows a good stalker's track below the cliffs of Creag nah-Iolaire, ascends a steep gully on the eastern side of the mountain, then traverses back west over the wide ridge dotted with lochans to the summit of Sgùrr a'Gharaidh:

Track_SGURR A GHARAIDH 14.4KM.gpx Open full screen  NB: Walkhighlands is not responsible for the accuracy of gpx files in users posts
Parking in Glasnock is limited - room for 2-3 cars on the grassy verge, but of course there was nobody else climbing Sgùrr a'Gharaidh on a cold, showery Thursday. Forecast gave us a 50/50 chance of snow showers over Torridon, but we were ready to take the risk. Initially, nothing suggested a break in weather: lovely sun in the morning, a few fluffy clouds hanging above Beinn Bhan:

Across Loch an Loin, Beinn Damph and Ben Shieldaig also in sunny conditions:

A short walk along the main track in Glasnock took us to a gate (not locked, thankfully). This gate gives access to the track into Coille Dhubh, past some nice birch woods: 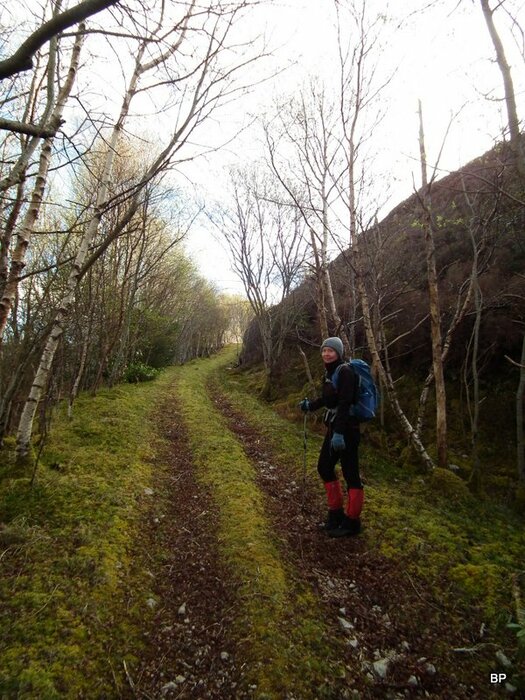 As soon as we were out of the forest, we were stunned by the superb vistas to the neighbouring hills: Beinn Damph, Ben Shieldaig, Beinn Alligin...

...as well as the corries of Beinn Bhan:

I remembered from our previous visit, that the track was boggy in places, but today it was surprisingly dry. Maybe last time we walked it after a period of wet weather. Who cares. I was glad we didn't need snorkels this time... An Ruadh Stac and
Maol Chean-dearg on the horizon to the left: 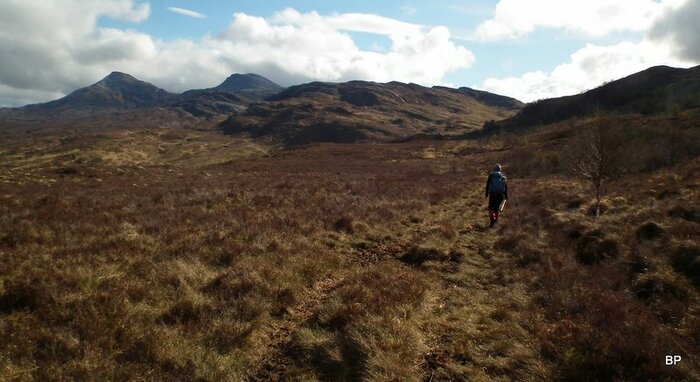 The cliffs of Creag na h-Iolaire from below look impenetrable but there are cracks in this wall...

The SMC guide suggests going up this grassy... hmmm... let's call it a ledge:

...but we had already decided, we were sticking to the poo gully, horrible as it sounds

Kevin made no attempt to hide his excitement (yes this is He Who Knows It All Best in his excited state!!!): Because we had done this before, today I wasn't intimidated by the sheer vertical rocks of Creag na h-Iolaire. I'm a panther, not a chicken after all 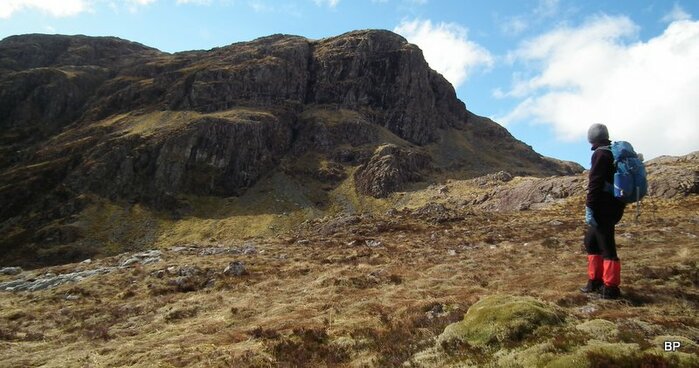 Might look absolutely impossible for a non-rock climber, but the first impression is wrong. As I said, there are gaps in this defensive wall. ) so Kevin wasted no time and charged up first, leaving me to take pictures and follow in his wake: When picking route carefully, one can find way between the rocks without the need of scrambling, just steep grassy slopes. Care is needed, especially in wet weather as some sections are loose. Just make sure you check where you put your feet: Having gained about 100m, we emerged in a bottom section of a grassy ramp, one which we call "the poo gully". Last time when we climbed it, it was full of deer sh**te - some of it ended up falling on my head as I stupidly climbed in Kevin's line. Today, I was desperate to avoid my old mistake. I went first and told Kevin not to follow me too closely... 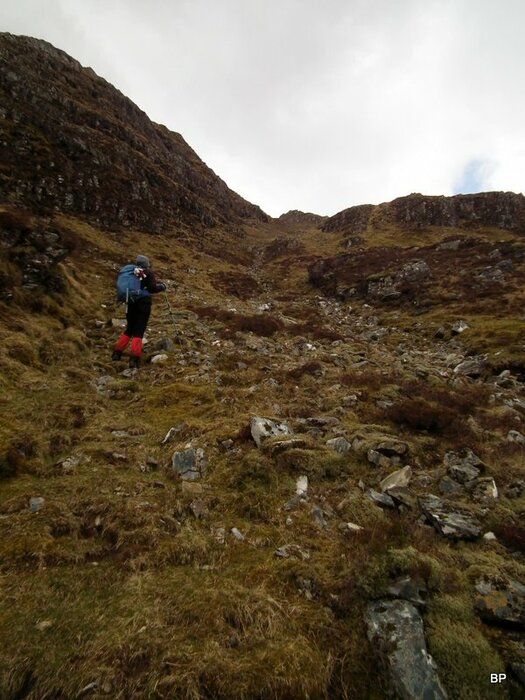 ...but to our delight, the poo gully didn't live up to its name. Probably all the sh*te got washed away by melting snow. I didn't want to deliberate on it. Today, the gully was an easy climb: I know I use the word "easy" too often and perhaps, for some people this steep ramp seems too extreme, especially when looking down: 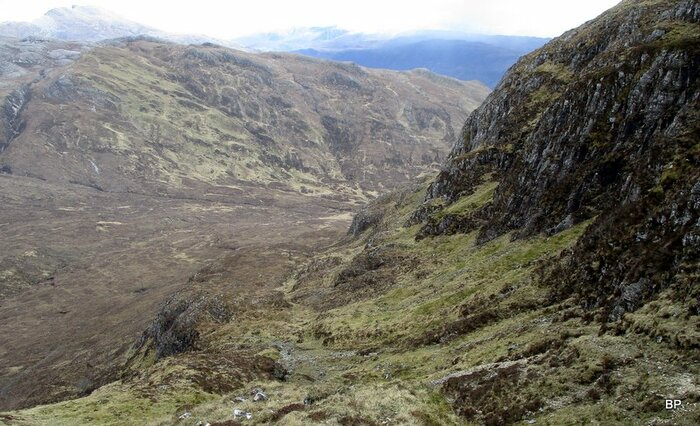 Panther in her element: Strathcarron hills with a layer of fresh snow:

A short breather close to the top of the gully, where ground is the steepest: Kevin on the final stretch of the ramp, trying not to look too tired On reaching the ridge, I felt the familiar wave of satisfaction, probably the result of the endorphins being released into my body. Yes, hillwalking is an addiction. At least it's the kind of drug that does not bring any damage to your body - if you don't count two dodgy knees and countless scratches and bruises from scrambling, but I'd rather take my chances with future knee replacements than spend my life on the couch, developing diabetes.
The hard work done, now just a few bumps to cross (the summit of Sgùrr a'Gharaidh just visible behind me to the left):

We were lucky to be done with the difficult part of ascent before weather changed; the first of many snow showers was coming from the north-east:

Before the snow arrived, we managed to catch a glimpse of the Cuillin Ridge...

...before the white net curtain was drawn for a short time:

Luckily, we only caught the edge of the shower and in 15 minutes the world was clear again. Walking to the summit now seemed a formality: 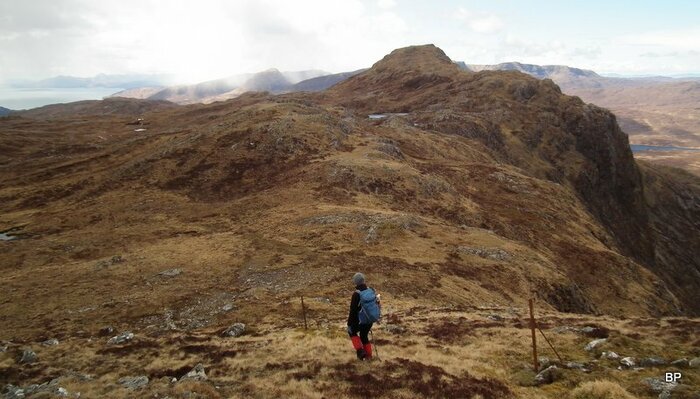 The sunny spell was not to last sadly and the NE sky was threatening us again with more passing showers:

The high bealach between Sgùrr a'Gharaidh and one of the lower tops (703m) is dotted with lochans of all shapes and sizes, a few nice spots for high wild camping and multiple routes available through the labyrinth.

) so Kevin had time to approach the edge of the cliffs for some photos. The perspective was interesting, certainly to the southern Torridon Munros, rarely seen from this side: 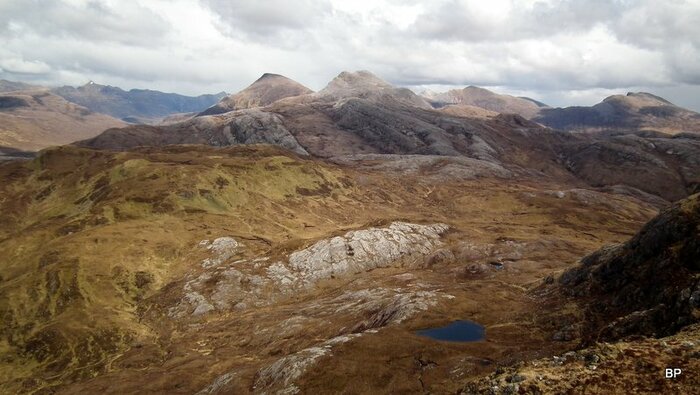 Having passed the lochans, we embraced on the final push to the summit, but the next shower was on our heels: Who turned the light off???

Brace up for impact! The water has taken a shape of a monstahhh!

It was snowing heavily when we arrived at the cairn, so we just sat behind a large rock and waited for the shower to pass, which it did soon, giving us the opportunity to enjoy the summit views. Sgùrr a'Gharaidh is a super-duper viewpoint, even on a day like we had you simply can't deny it!
Me an Lucy marking our second visit to Sgùrr a'Gharaidh: Kevin posing... with another shower behind! View east with more weather traveling in our direction: 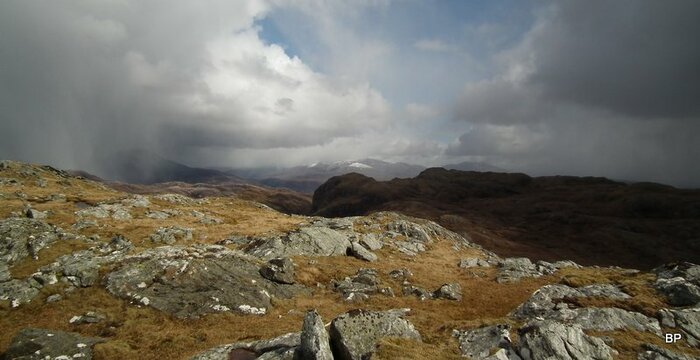 We had a quick cup of hot tea to warm our bones before descending the western slopes to Lochan Meall na Caillich. Another shower came and went, by now we stopped paying attention to the frozen rain. I must admit though, that the showers added some drama to the landscape, certainly it looks like they did in our photos.
Bein Shieldaig and Beinn Damph starring in "The shape of water":

The descent is seep and overgrown in places, we found a faint path at some point but lost it again on the final descent - how typical of Kevin, he always takes shortcuts

Are you sure this is the right way?

The shape of water, vol. 2: Armageddon is coming! 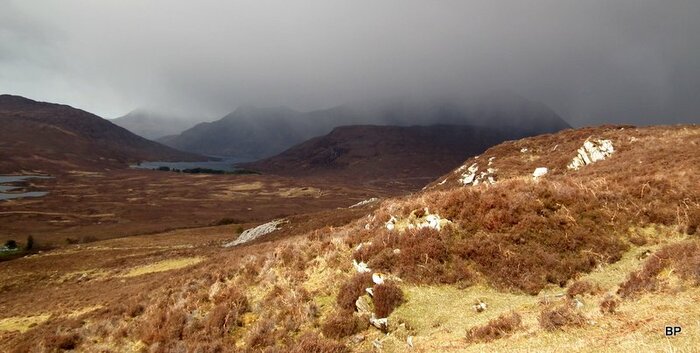 To return to Glasnock, we descended the bumpy ground to the right (NE) side of Allt na Criche. Before the last (and the heaviest) shower reached us, we had time to admire the cliffs of Applecross once again: We had a fantastic day out on the hills again, despite the threatening weather. No guilt felt about repeating a Graham rather than looking for something new. Sgùrr a'Gharaidh is the forgotten hero of Torridon, just as the neighbouring Ben Shieldaig. Both only climbed by dedicated baggers and so underrated. Just a proof that in north west of Scotland no hill is a bad one.

My next TR will take us to the other side of Strathcarron, to another little known yet very entertaining Graham. More showers, rocky ridges and hidden lochans to come soon!
Click to mark this as a great report. Register or Login free to be able to rate and comment on reports (as well as access 1:25000 mapping).