28th December 2021. Today was the last opportunity to visit the hills before the New Year 2022 would arrive, hopefully bringing proper winter and good snow conditions. Or so we had hoped (how wrong we had been!!!).

We picked one of our favourite Grahams, Beinn a' Chearcaill. This shy hill on the edge of Torridon is rarely visited by hillwalkers. Most visitors simply overlook it, impressed by the neighbouring Beinn Eighe, Liathach and Slioch. We have a habit of climbing Beinn a' Chearcaill in December. It's a good Christmas hill with fantastic views in all directions, especially to the famous SW cliffs of Slioch, also the summit of the Graham gives an unusual view into Corrie Mhic Fhearchair of Beinn Eighe.

During one of our previous visits we included the top of Creag na Feaol, but today it was the easiest approach up and down the old stalker's path in Glen Grudie:

Track_BEINN A CHEARCAILL 13.6KM.gpx Open full screen  NB: Walkhighlands is not responsible for the accuracy of gpx files in users posts
We arrived in Torridon with the first light and were witnesses to the spectacular morning sky over Beinn Eighe:

The morning sun on Slioch: There is a good layby just north of the start of Glen Grudie path. One car was already parked there when we arrived, but we never saw a soul all day. Usually, if you climb a mountain in Torridon (even in winter) on a decent day, you're bound to meet fellow walkers; we were surprised to have Beinn a' Chearcaill all to ourselves!
Looking back down the path to the starting point and across Loch Maree:

I simply couldn't take my eyes of Slioch, it's the same every time we go up Beinn a' Chearcaill, the bigger brother is staring us in the face!

The main path up Glen Grudie is excellent. It is possible to climb straight up A'Choineach Beag (another lower top) but we preferred the easier option. 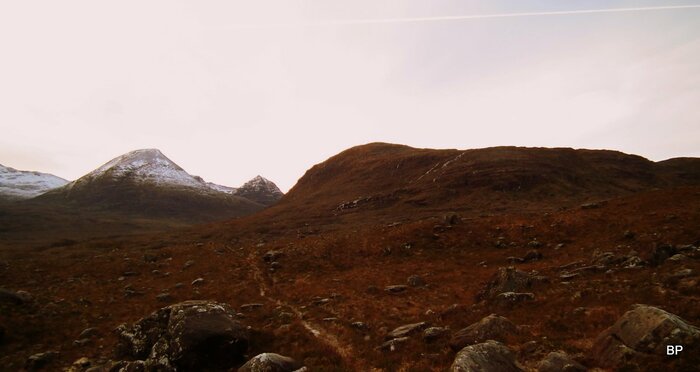 Into Glen Grudie, Creag na Feaol in front of us, with Ruadh Stac Mor further in the distance

After about 2km we located a small cairn marking the start of another path, this one climbing gently into Coire Briste. On warmer days, this path can be very boggy but today it was an ice rink and we ended up climbing on the vegetation alongside it for most of the time:

I'm afraid this TR will end up overloaded with photos of Slioch... Here it is, with more distant Mullach Corrie Mhic Fhearchair to the left:

The path climbs out of the corrie and disappears just past a small tear-shaped lochan at about 500m. From this point we still had over 200m of ascent over pathless, rocky terrain, but the angle was mostly gentle. Some snow and more ice covered the rocks and we agreed that on the way down we'd better use the spikes, but for now on it was fun and games Panther style: The best views were of course to the north, to Slioch and the Fisherfields...

...but also to the more distant Fannichs:

A wider pano with the tear-shaped lochan in the foreground:

We walked past a second lochan and clambered up the steeper, icy section above it to the summit plateau, where at last we found ourselves out of the shadows and basking in December sun:

We were still about 80m below the summit proper but we have now entered the weird world of rolling stones: Beinn a' Chearcaill is well known for this strange feature: many flat rocky "fields" with odd stones scattered around: Meall a'Ghiubhias in the background

After the final, short ascent to the main summit area, we found ourselves balancing on thin yet very slippery layer of ice on the main "field": Can you see the summit cairn?

The sun was right behind Liathach and very low, so taking a good snap in that direction was a struggle. This is the best we managed: Liathach from Beinn a' Chearcaill

Beinn Airigh Charr and the island on Loch Maree:

We "skated" on the icy surface to the summit cairn, where we had a long break. There was virtually no wind and despite the frost, we didn't feel cold. Lucy on the summit

Zoom to the buttresses: 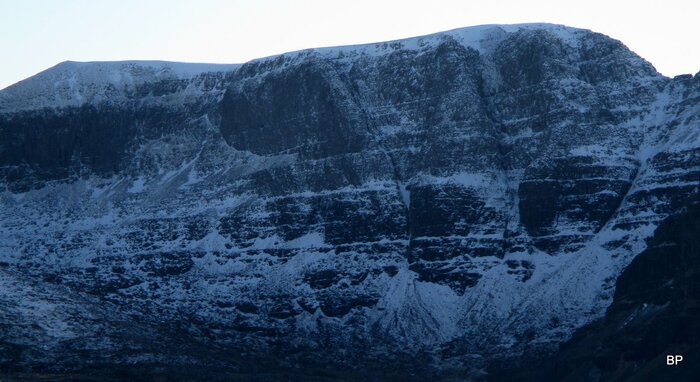 The last summit photo of 2021 - not a bad year after all. Nearly 1300 km walked, with the ascent of 52000 m, 66 listed hills (24 new) and, last but not least, 18 plane crash sites. When we started climbing together, we concentrated on bagging as much new stuff as possible, today it is more about enjoying the day, finding a new route up a well known hill, combining different tops. Looking for the crash sites allows us to visit spots we would never see otherwise, often explore the unknown sides of popular mountains. We no longer set ourselves a target - whatever will be, will be. Life's too short to be afraid.

Of course, I wouldn't be myself if I didn't finish the summit break with something more... unusual Looking south from the summit cairn: To make the descent easier, we put crampons on and marched down the same way: In Coire Briste, we ditched the icy path and took a line down alongside the stream (Allt a'Choire Bhriste), taking the advantage to photograph the frozen waterfalls: The afternoon light on Slioch, as taken by Kevin:

He hasn't said his last words yet. He'll be back to Torridon for more photos ...
We finished 2021 on a high. Sadly, the New Year didn't start as well as we'd hoped. We both came down with an annoying cold. We did several COVID tests each and all came down negative, so it obviously wasn't the nasty virus, just an ordinary common a-choo, which we both defeated easily in a few days. Weather didn't play ball either and as a result, our score so far in 2022 is 3 Sub2000ers. Well, better 3 Subs than nothing and the year is only beginning! I will post my TRs from these three short local outings next week.
Click to mark this as a great report. Register or Login free to be able to rate and comment on reports (as well as access 1:25000 mapping).


Walking in the windfarm wonderland