As we were staying near Oban, we thought that a little exploration of the island of Kerrera would fill in a few hours, so after seeing a weather forecast for very iffy weather we arrived at the ferry near Gallanach and spent 10 minutes trying to make our minds up whether to go for it or not. We had to park a bit along the road as the roadsides were jammed with parked cars and there was a queue of walkers waiting to be taken to Kerrera. The wee ferry boat can only carry 12 passengers at a time and was shuttling back and forward without pausing until the queue was gone. 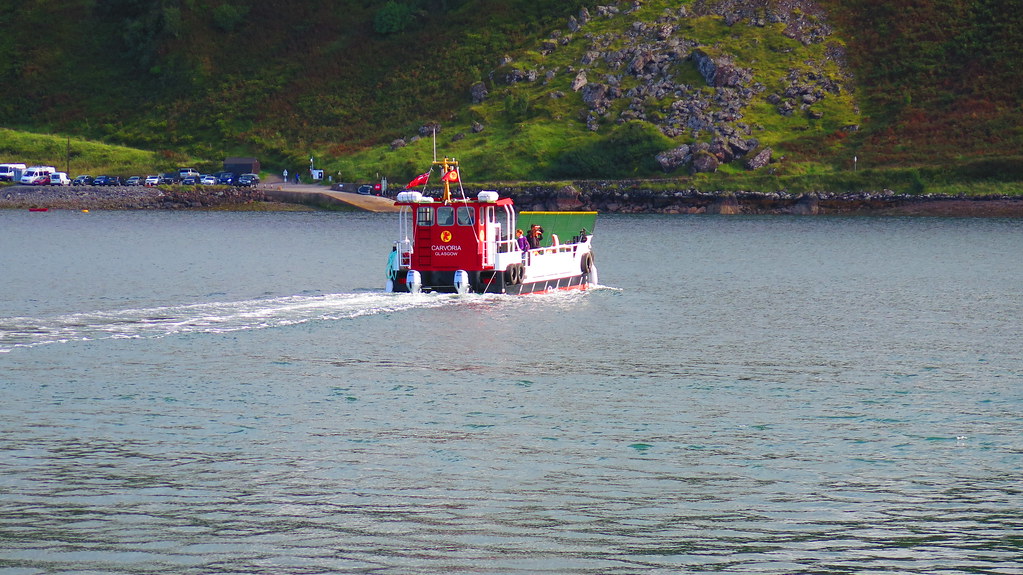 It was unbelievably busy, I've come across less walkers on a walk in the Yorkshire Dales. Most fellow walkers seemed to be foreign, quite a few spoke German.

Not long after leaving the ferry "port" we were overtaken by the Royal Mail delivery vehicle. It looked like it might be fun to drive. 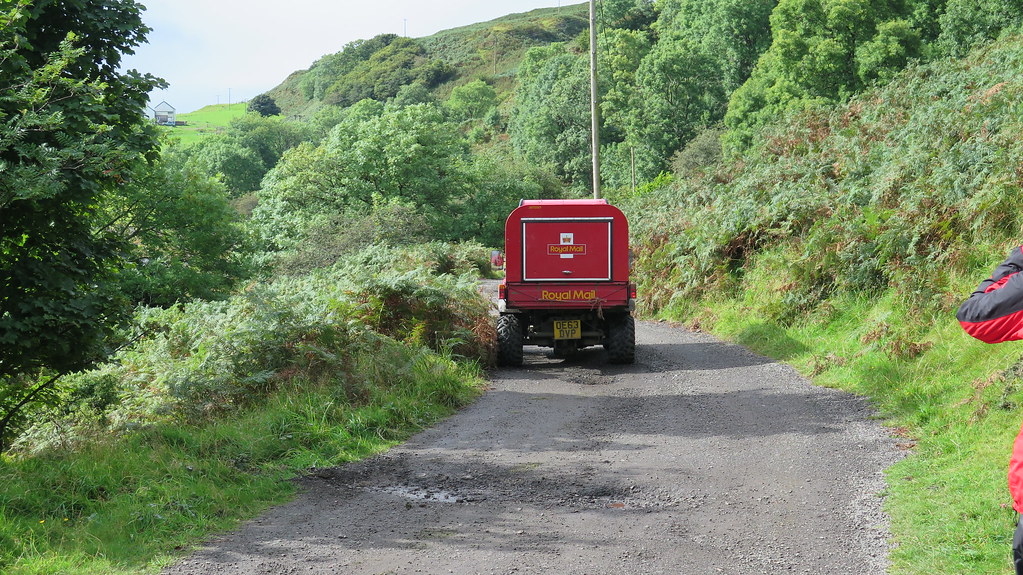 The road was reasonable, made of gravel and deteriorating tarmac, with a fair few potholes. A short distance further we came upon the first sign on the road side that was to be the theme for half the walk. Sadly, I didn't take a photo, but there was a sketch of Lionel Ritchie, with the text...Is it Tea You're Looking For? - by Lionel Rich Tea

We got the first of several light drizzle showers, none of them enough to wet us much and the road continued fairly level along near the coast until it climbed up past Upper Gylen and over the hill, before dropping down to Lower Gylen where Kerrera Tearoom and Bunkhouse is situated. 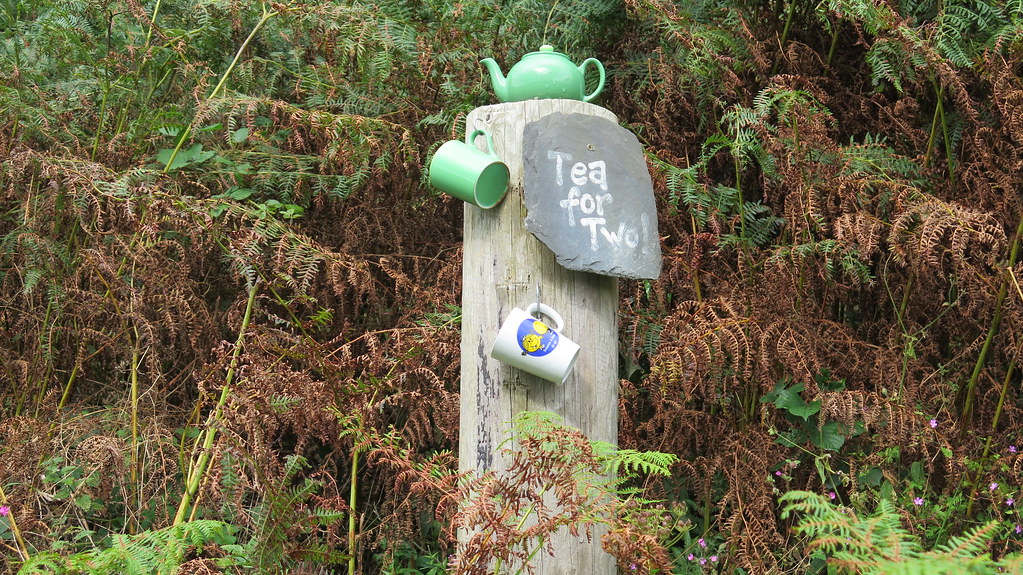 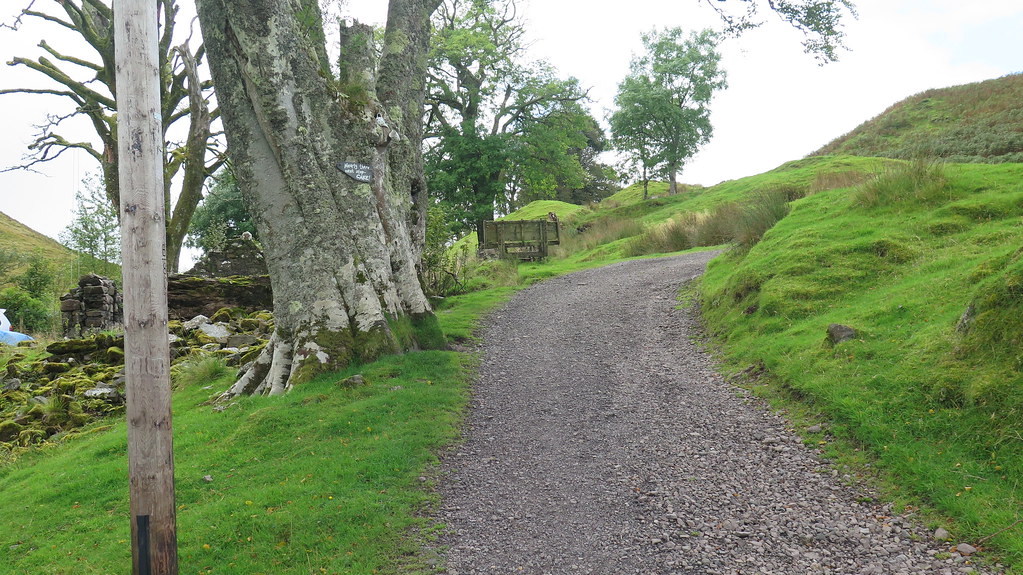 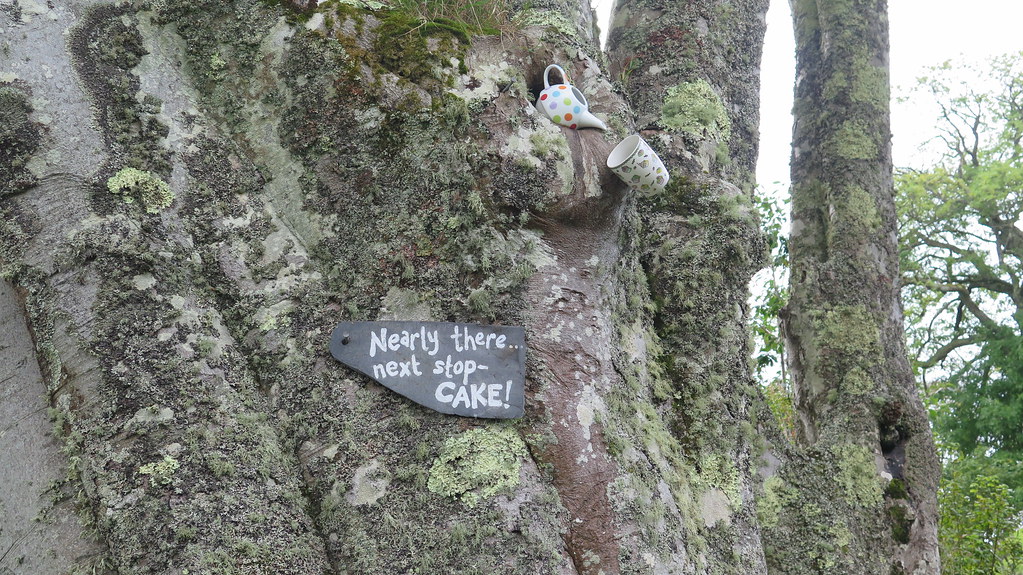 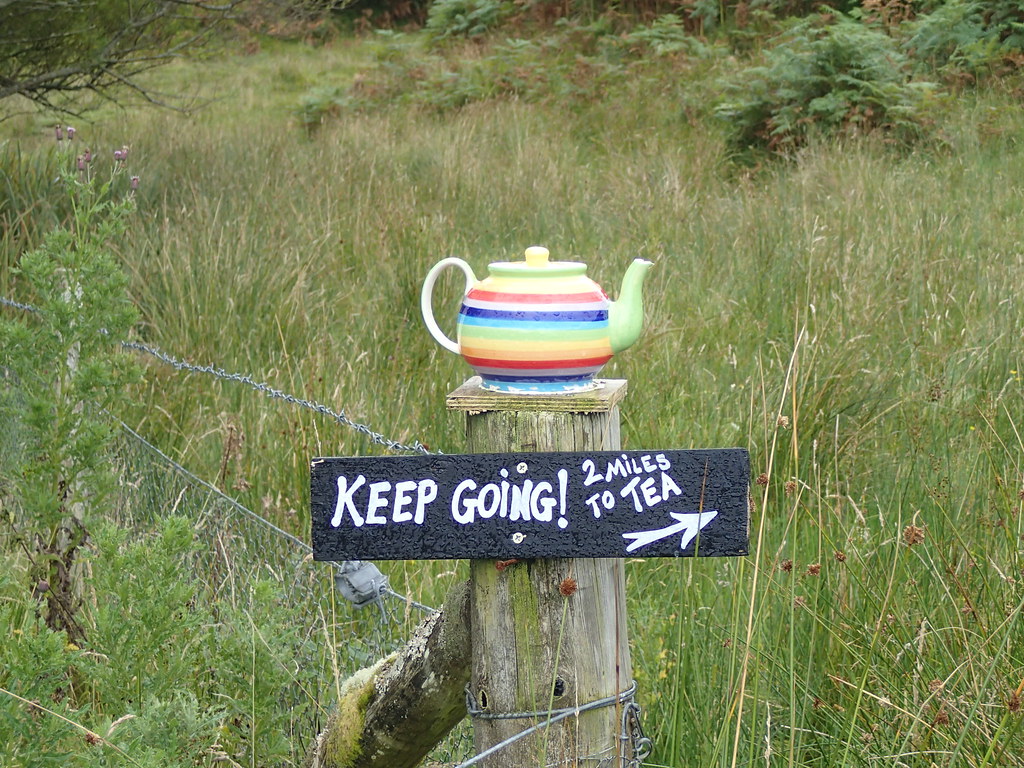 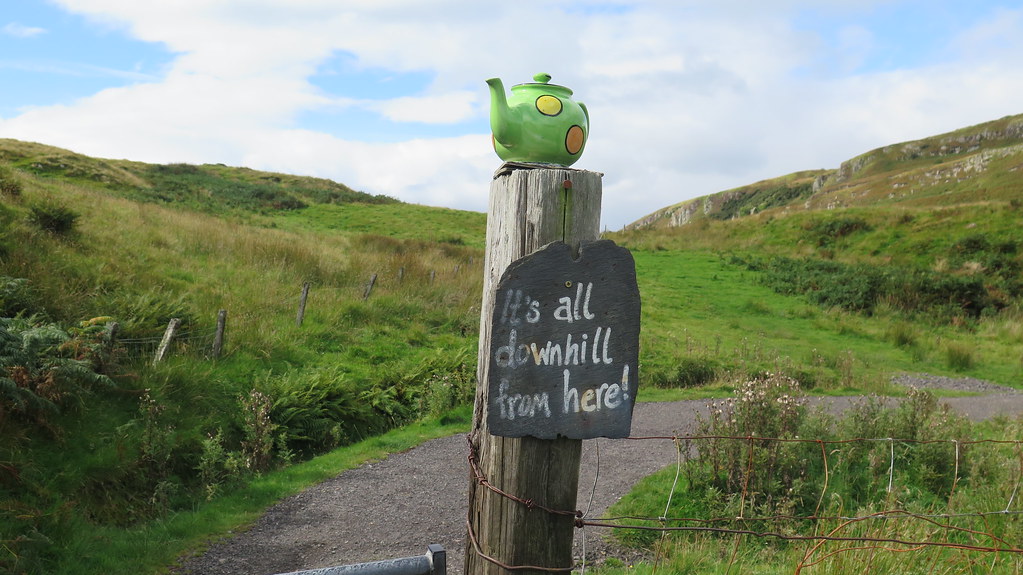 The tearoom is in a nice setting and we had a cuppa and a piece of cake each sitting outside in the garden, with about another 15 to 20 walkers, with more arriving as we left. 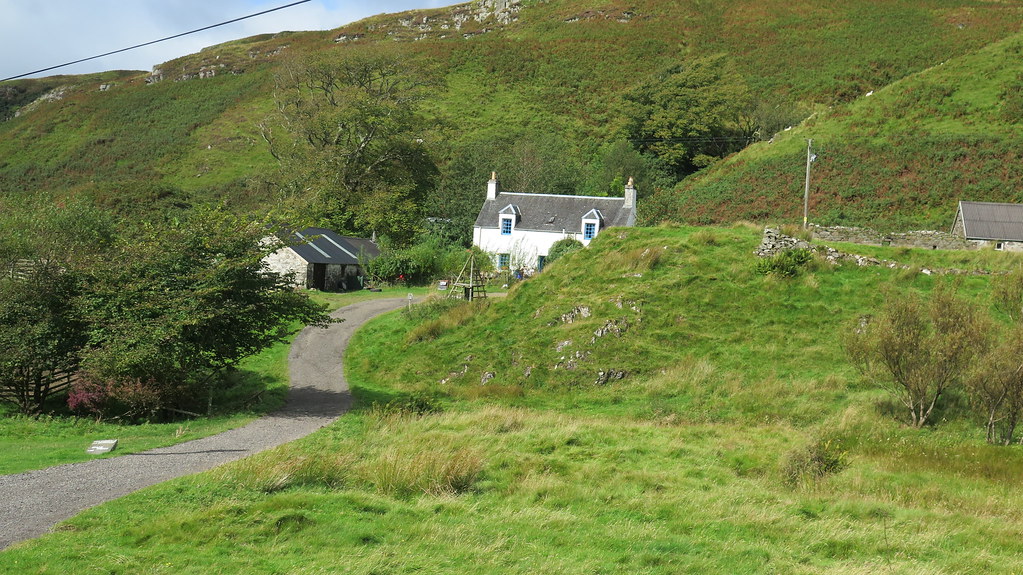 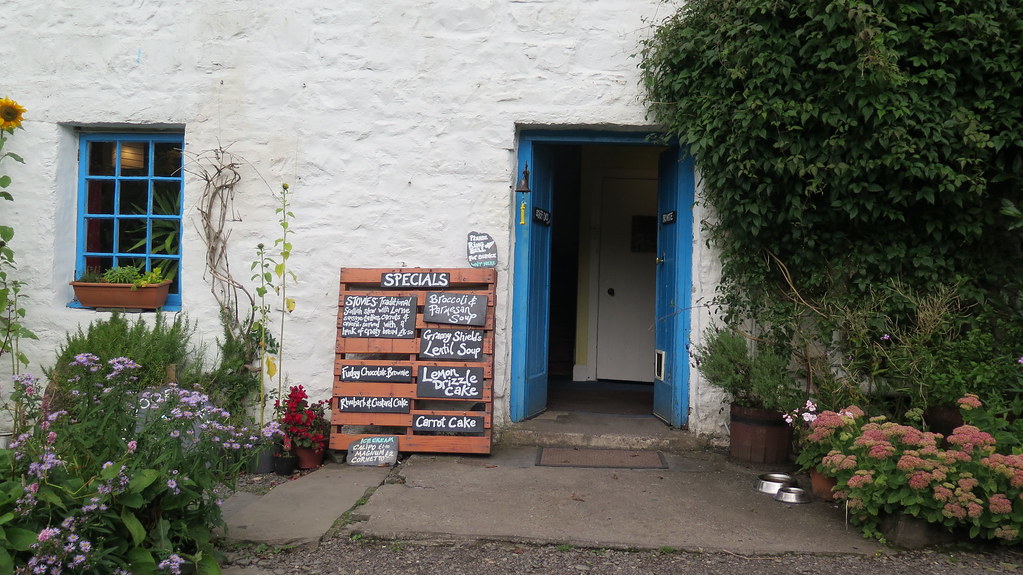 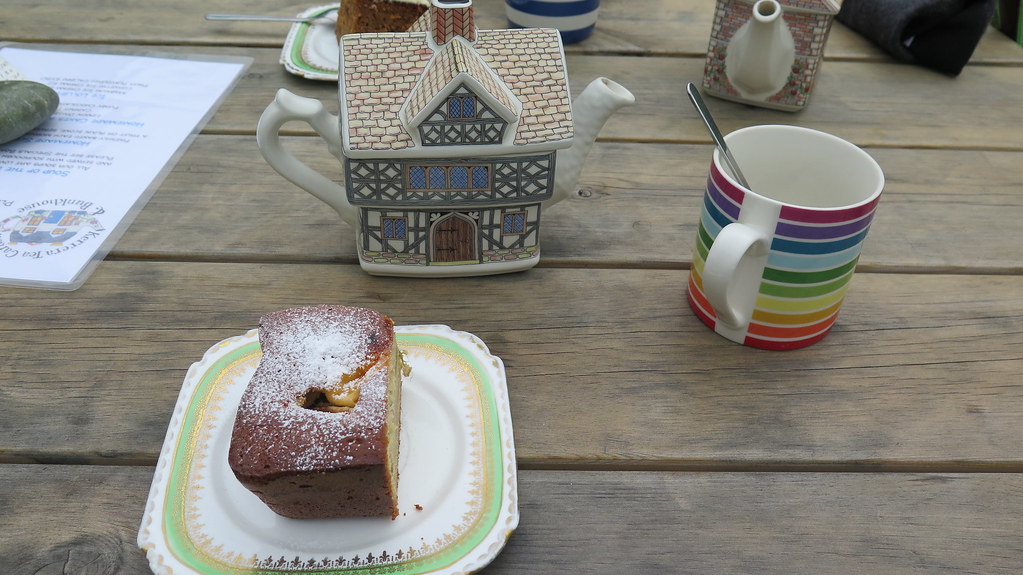 From there, the decent road ends and a grassy and often wet / boggy path continues down to the sea and Gylen Castle perched high on a cliff, overlooking the sea. On the way to the castle the path passes an "earth toilet" which is functional though stomach churning. One young woman had a brief look in and screamed before fleeing. 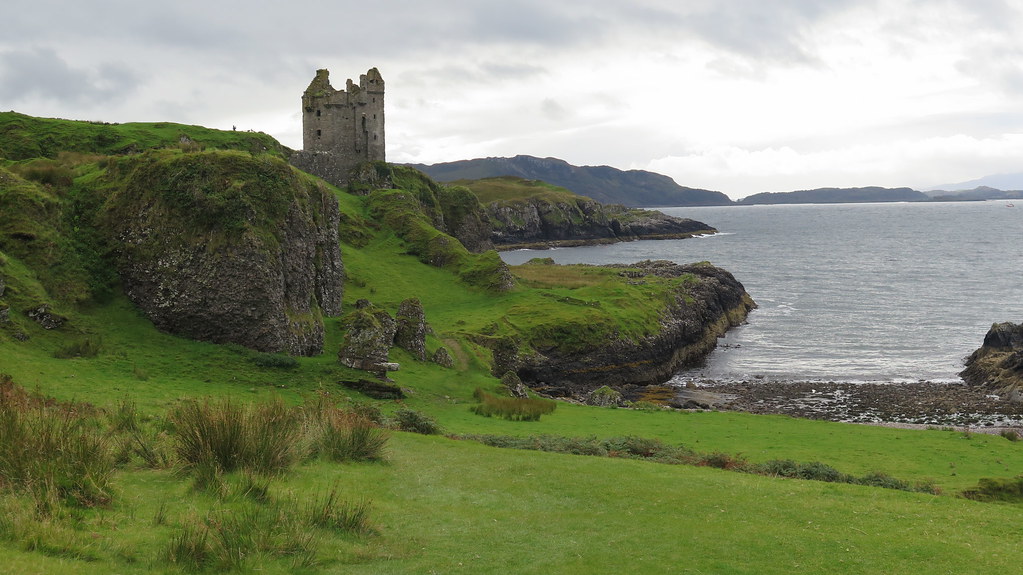 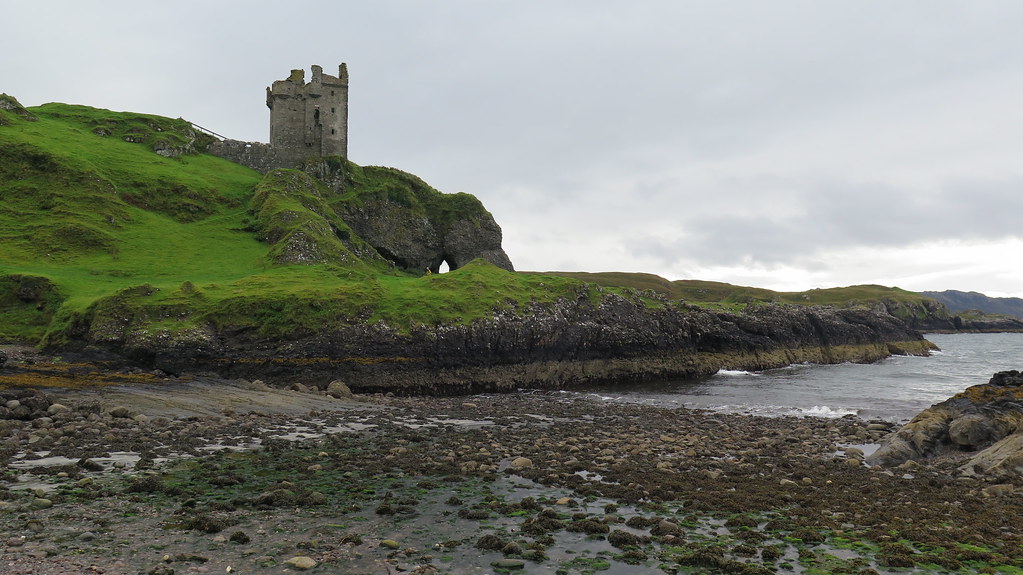 We continued westwards , keeping near the sea, passing rock formations of pudding stone until it became swampy and we had to divert back inland to rejoin the main path / vehicle track, which was part dry and part boggy. 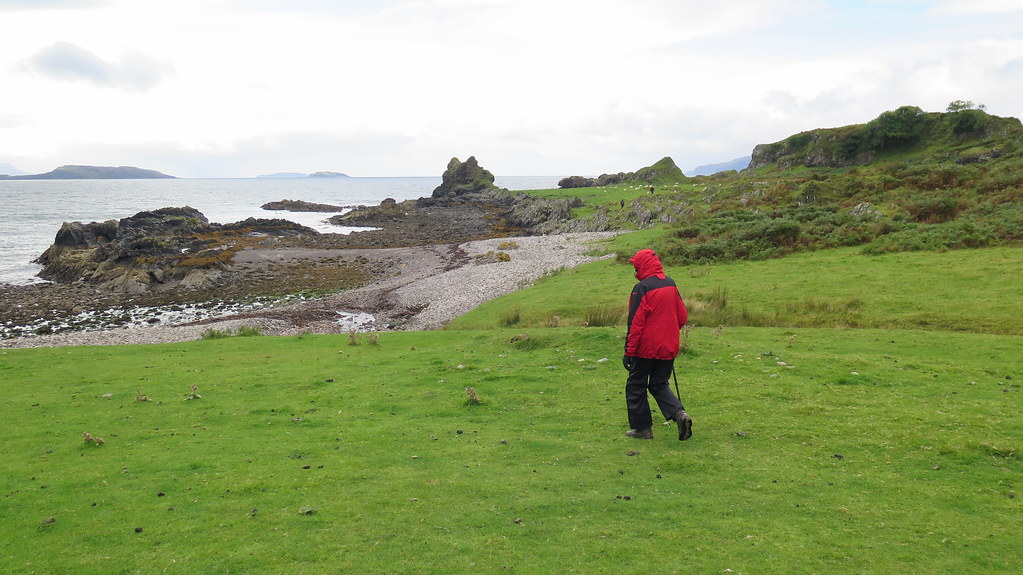 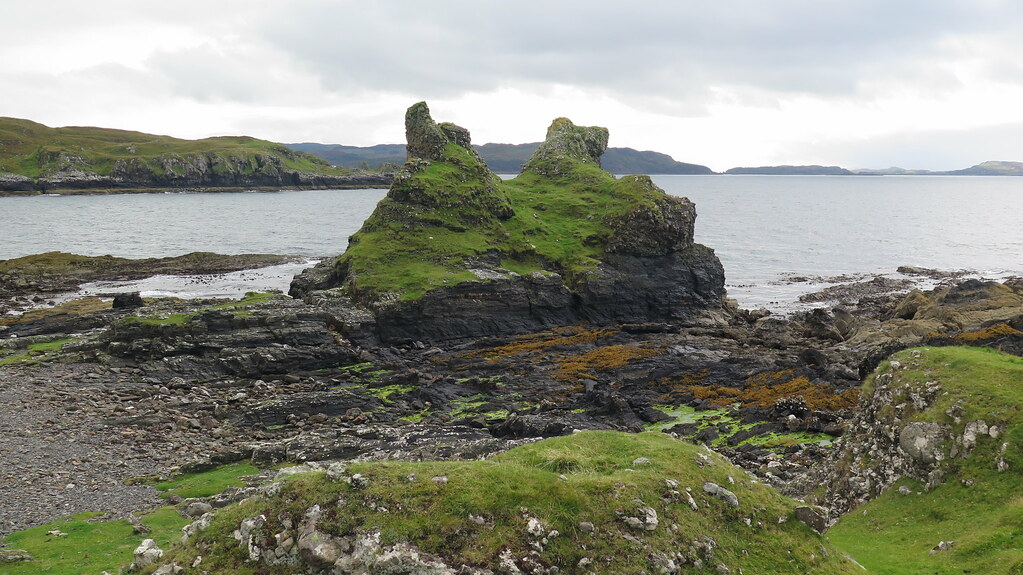 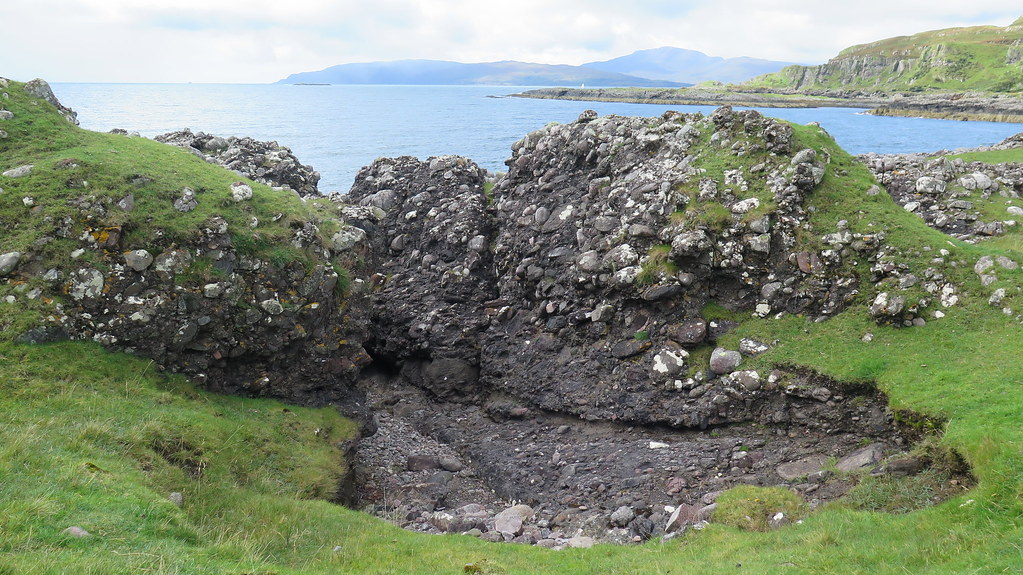 The path follows the coast here, looing to Mull in the background. 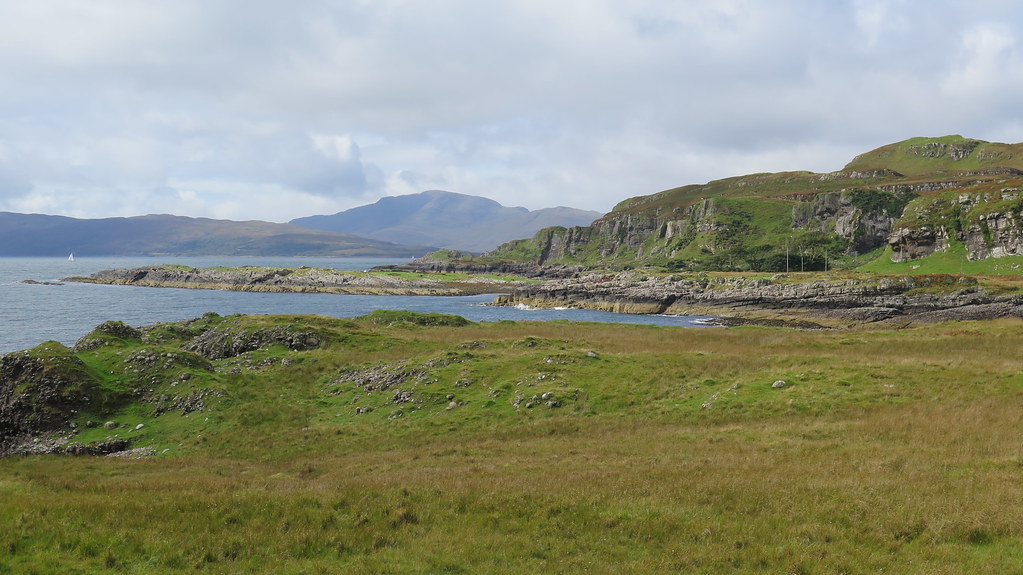 Further on, there's the remains of a volcanic dyke. 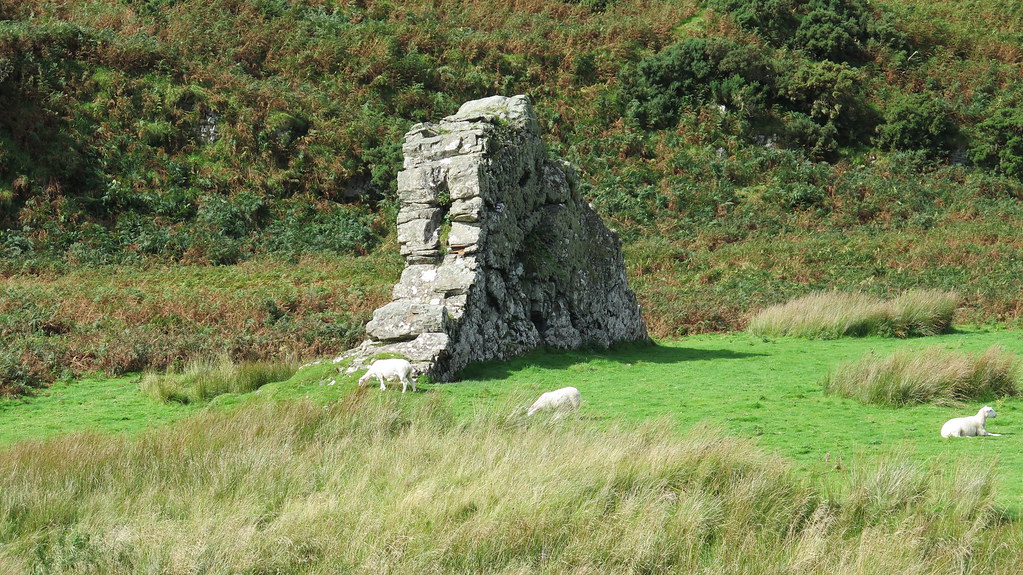 Beyond the dyke, at Ardmore, a table was set out by the path, with home made soaps for sale and an honesty box for payments. The vehicle track the becomes a stony path which rises to the left of the cottage, up a small narrow glen and emerges at a very small weed-filled lochan where there were quite a lot of large dragonflies flitting around. 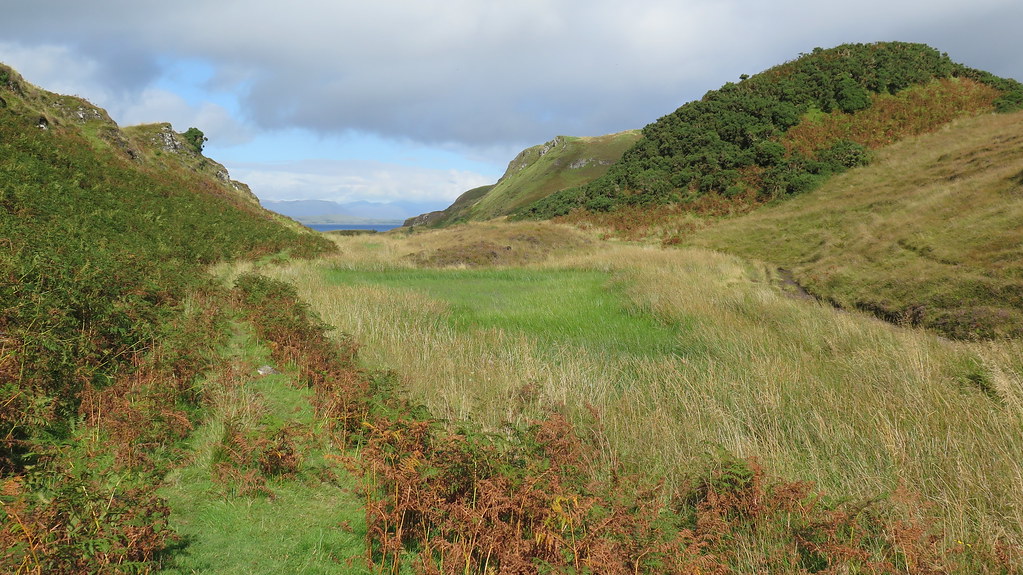 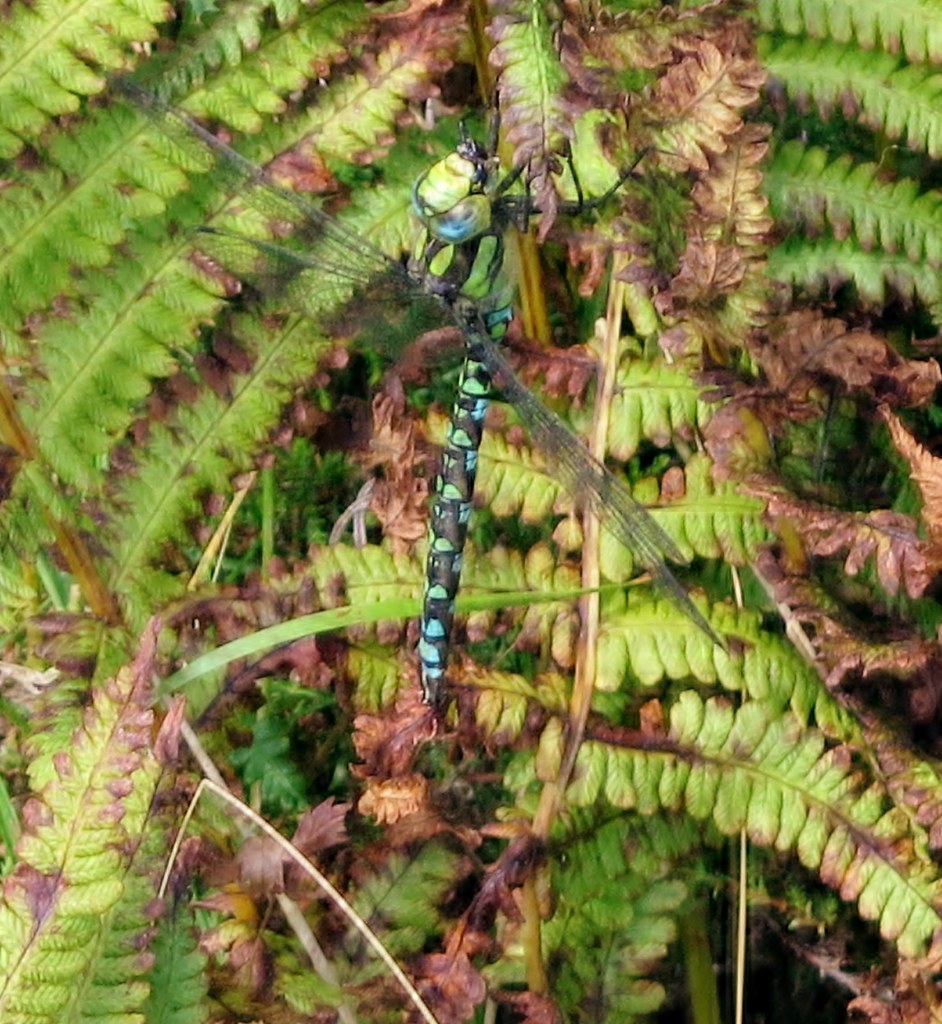 From the lochan, the path winds its way round the hill, gradually falling to where it meets a decent track again at Barnabuck. There were good views out towards Mull, where we could see showers passing over the hills. 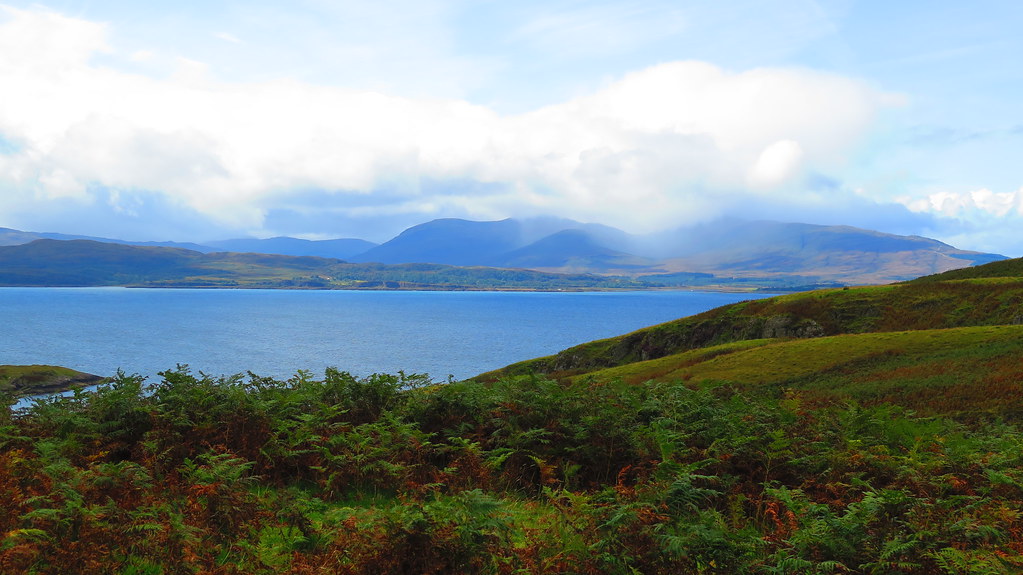 From there on the road twists and winds its way up the hill then levelling out for a while before it gradually descends back to the ferry terminal. From this stretch of road there's some good views across to Mull and North towards Lismore. 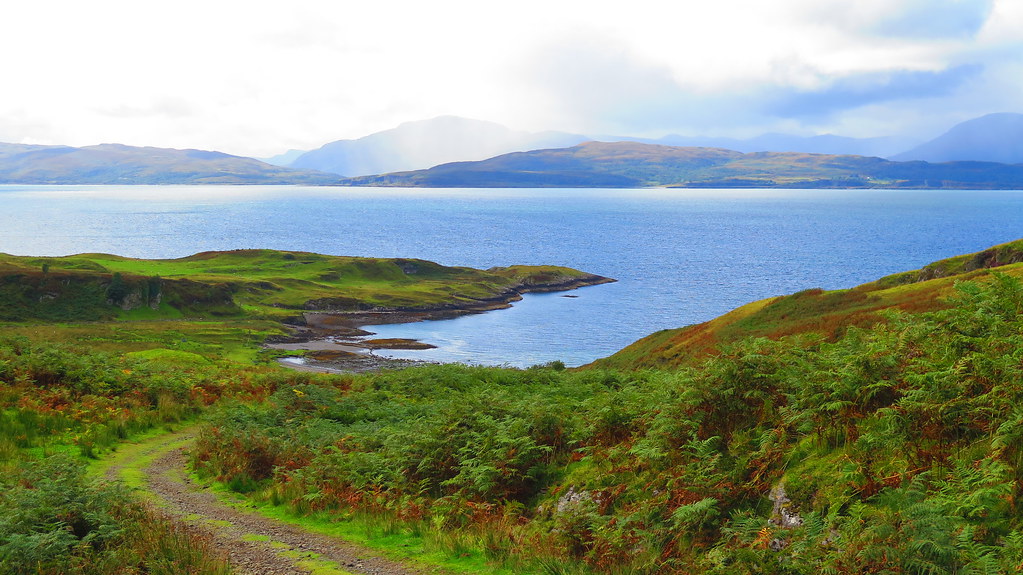 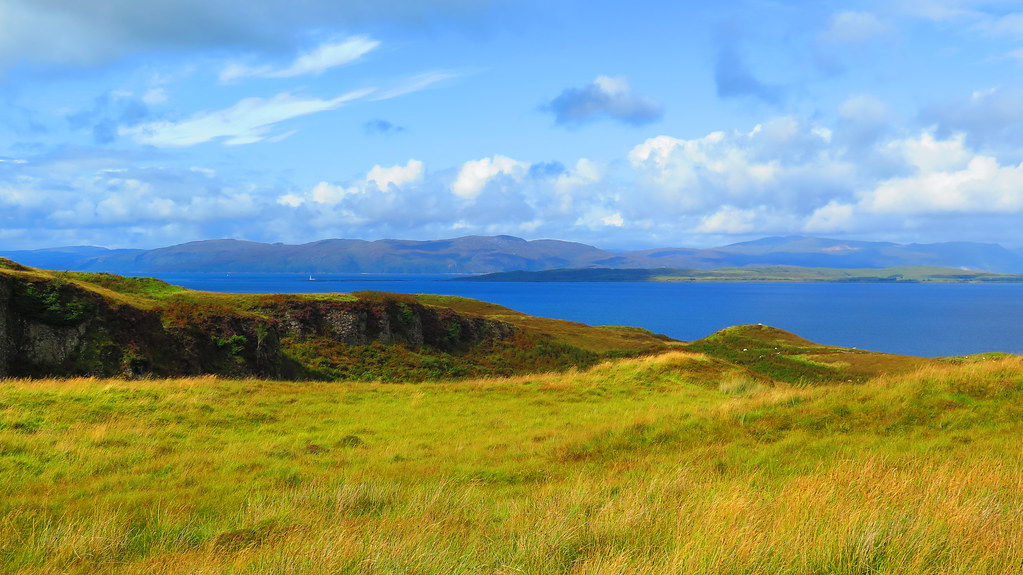 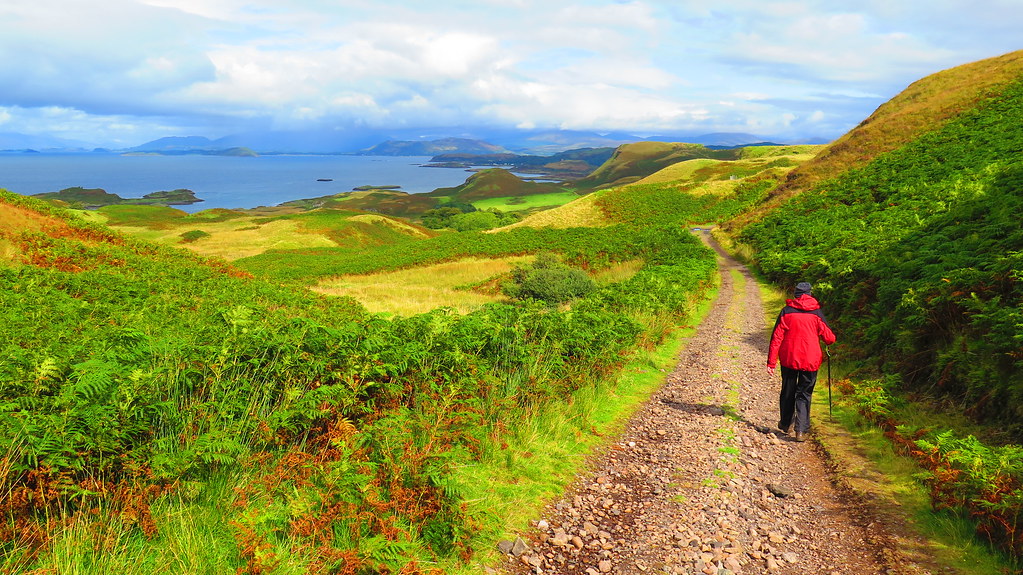 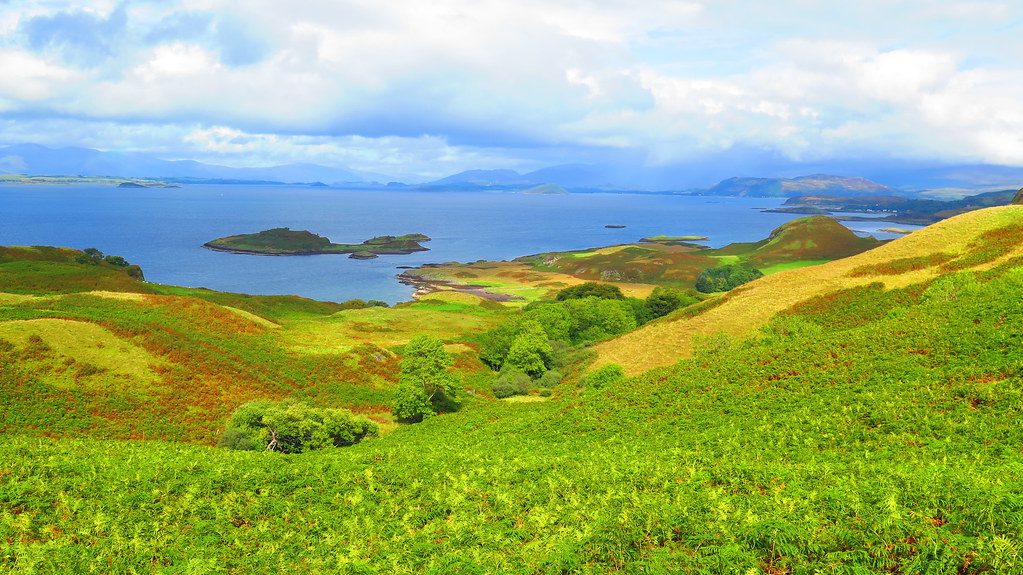 The weather remained fine for the rest of our walk where we got a nice, but different view of Oban/ 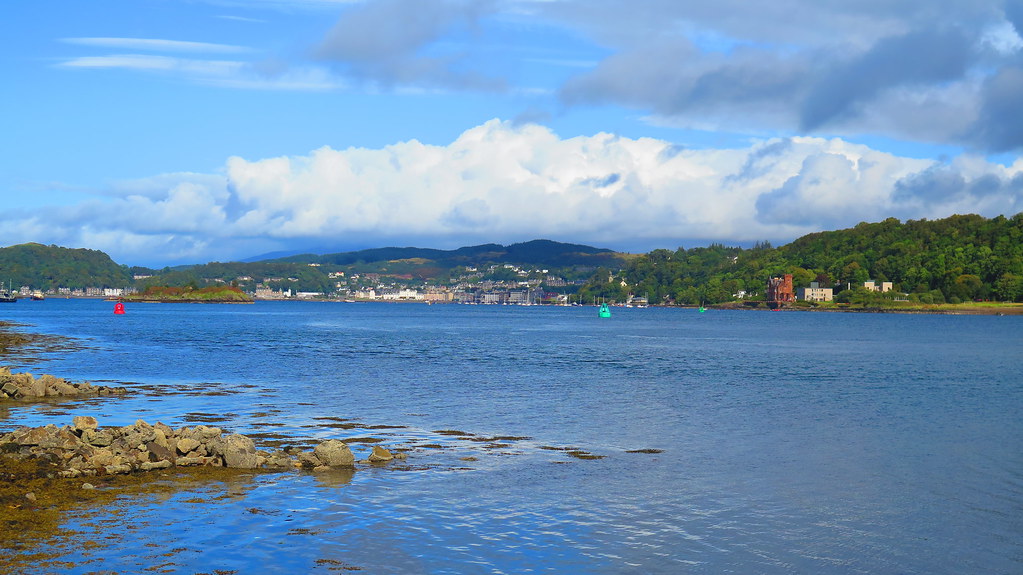 
Whernside on a Lovely Summers Day

The Chalamin Gap - You'll Love It - or Hate It.

Aysgarth to Askrigg and Back - Circular Route

Waterfalls of upper Teesdale on a beautiful day.

Lairig Ghru and a Ruined Camera

Location: North East England
Occupation: Retired
Interests: Exploring Scotland on foot. Don't climb many mountains now, but enjoy taking the tent into the hills for longer walks like WHW, Minigaig, Lairig Ghru, Lairig an Laoigh, Tilt- Geldie - Feshie, Road to the Isles. Have also started adventure cruising, so I've now been to Greenland, Iceland and Norway. Greenland is amazing. Also like exploring Scottish Islands by bike and on foot.
Activity: Wanderer
Mountain: Braeriach
Place: Cairngorms
Gear: Swiss Army Knife
Camera: Panasonic Lumix DMC TZ200
Ideal day out: A wander through the mountains, just going where the mood and my curiosity takes me, with frequent stops to take in and remember the views.
Ambition: To visit Antarctica