A Gorgeous Evening at Loch Skeen

I had first become aware of Loch Skeen whilst simply scrolling around the maps view on Walkhighlands looking for interesting features, as I sometimes do. Suddenly there it was, this medium sized loch clearly at some elevation and with higher ground and crags around its northern and western fringes. This just had to be a special place, it promised so much. I resolved there and then that I would visit this loch to see for myself.

My rota for this week had me down for an early breakfast shift on Sunday and finishing at lunchtime. My friend Jari had told me that he was off all day on the Sunday so I suggested that we could get out after lunch and maybe we'd be lucky and get some good sunset photos. The beaming smile and fire in his eyes told me that he approved of that prospect much more than his command of English ever could, that universal language of facial expression tearing down the barriers which limit verbal communication between nationalities.
I had told him I would be finished around midday so should be able to get out some time after 1pm. The plans were made and with the prospect of some decent weather for the Sunday I suggested Loch Skeen as a possible walk because I wanted so much to see if it lived up to it's promise.
Jari has walked Loch Skeen before so he was very happy to go along with that idea, although he was being very coy about what I could expect. All he would say was " It's quite a nice place".

Little did I realise that I would not be out of work until 2.30pm that Sunday. The Directors had asked for an inventory of equipment so I spent a dreary couple of hours scouring the Hotel for any dining room cuttlery I could find and then counting it, all the while looking out at the perfect weather and the beautiful borders hills. We are fortunate that the Hotel is in a fantastic location with stunning views out over the Tweed Valley and Southern Upland Hills.
With this delay I wasn't sure that Jari would have waited for me and thought that maybe he'd have given up and gone out on his own, a quick phone call alayed those fears though and I arranged to pick him up about 3.30 for the drive round to the Grey Mares Tail car park.
Now here is a salutory lesson for us all, make sure you do your homework before setting out. The car park at Grey Mares Tail is pay and display but neither of us had thought to make sure we had the £2 parking fee so I had to back track along the road a short distance to find a suitable parking location that was free.

The sky was looking good, blue but with plenty of clouds to offer some interest. It really did seem that we might get some lovely evening conditions and a good sunset, we were both excited about the prospect of some decent photos. 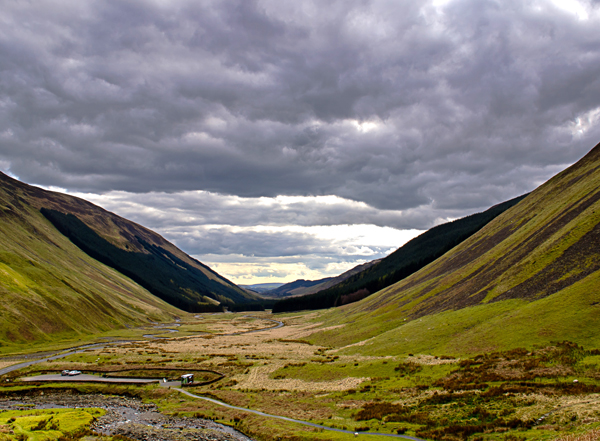 Moffat Water Valley from the Path up to Grey Mares Tail.

Immediately from the car park you are ascending a well made tourist track towards the head of the Grey Mares Tail waterfall. At 200 feet of drop it is a spectacular cataract. Make sure that you take the path heading up to the right side of the valley. There is a path on the left side but this only goes to a lower level viewing area for the waterfall. As well as the usual sheep on the hillsides there are some wild goats too and at this time of year kids can be seen with their mothers.
The well made path continues up beyond the head of the falls and follows the line of the Tail Burn. We took our time along here and couldn't resist making our way down to the burn looking for photo opportunities. There seemed to be plenty but I was cursing myself for electing to leave my tripod at home. 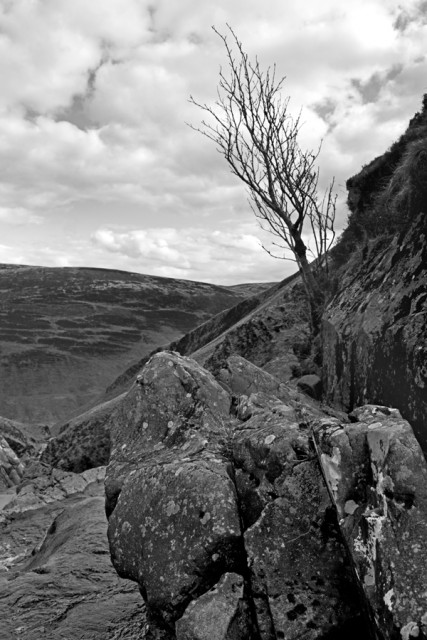 Looking back to Moffat Water Vally and the Hills on the far side.

Eventually White Coomb, Mid Craig and Loch Craighead came into view and teased us about what views might be in store further along the trail. Still Jari was giving nothing away. Tail burn with Mid craig and Loch Craighead behind

There was one particular spot where the burn takes a meander to the left between a pair of high banks with Mid Craig perfectly framed between the two so I stopped again for a few minutes to investigate its photographic promise and to rue the lack of a decent camera support. But this was simply the last little tease, that aroma you get when a delicious meal is brought to your table, that moment of anticipation just before a child tears open a present on christmas morning, because once you climb round the bank you are right on the shores of Loch Skeen and the vista that greets is just lovely. 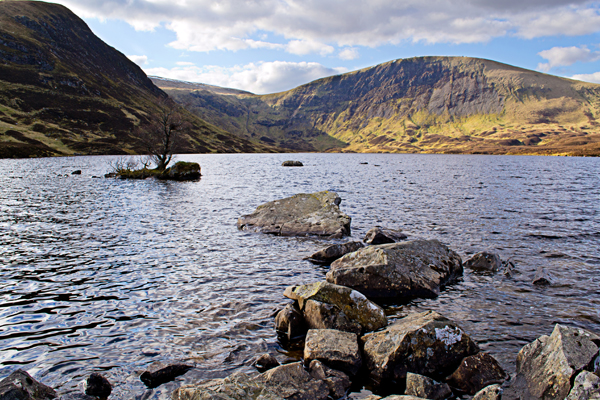 The loch was stretching out before us with the forbidding face of Loch Craighead on the far shore and Mid Craig and White Coomb to our left. The clouds cast their fleeting shadows across the hills so that the sun was first picking out one detail then another, the crags on the far shore, the little island topped by its knarled treeling, the first shoots of reeds peeping out above the water to greet the spring. I was beside myself and didn't know where to point my camera next. It was everything I had imagined that day looking at the maps.
We spent a long while at the lochside before deciding to move on. Now on less well surfaced ground we headed up Mid Craig taking in the views down to the loch and across to the hills in the east as far as the Eildons at Melrose. The sun was sinking lower as we climbed higher and I knew that Jari wanted to be on Loch Craighead for the best of the sunset so we pushed on. 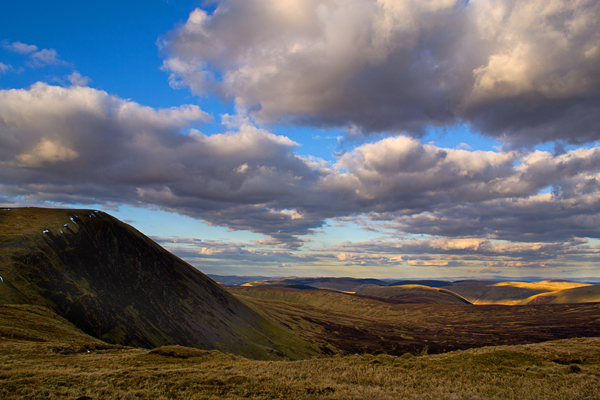 Looking East from Mid Craig. Loch Craighead is on the left.

I had neglected to bring gloves with me and my fingers were getting very cold as we neared the summit but with every step the light was changing and the views were stunning.Loch Skeene to the south pointing towards the border. 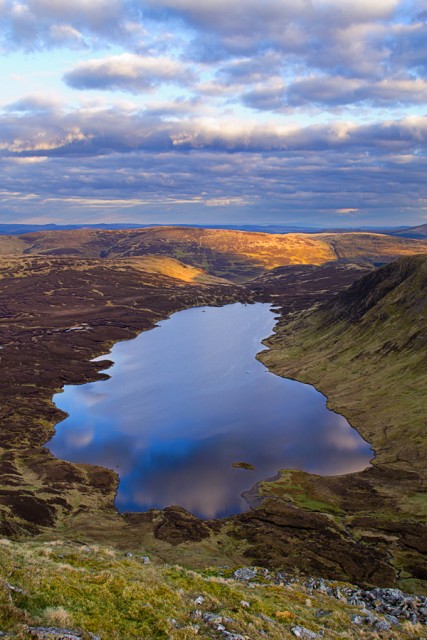 Broad Law appeared in the north, easily identified by its summit masts, in the west beneath the dipping sun were the hills of Dumfies and Galloway, blue grey against the orange of the sky. Through the ever changing clouds the sun sent out shafts of golden light to gently touch the summits of distant peaks. 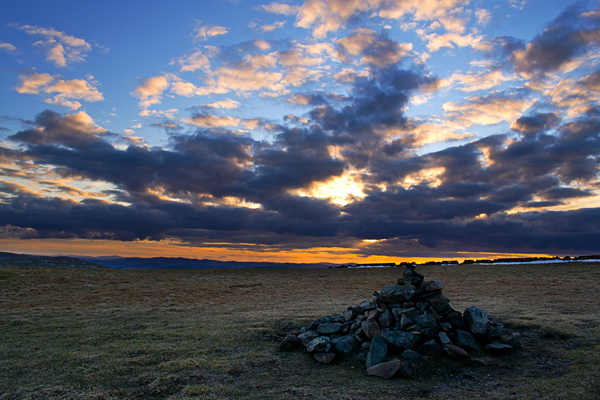 Summit Cairn in the setting sun. 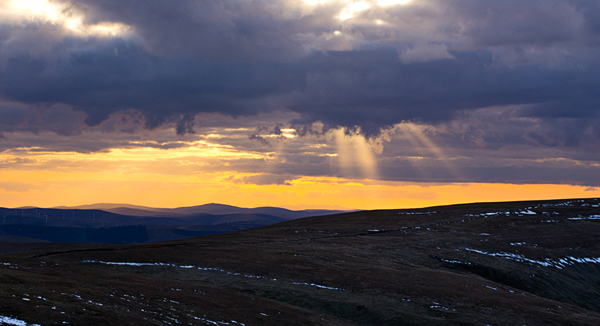 We didn't want to leave but the fading light and the cold against our fingers were driving us to return to lower altitudes. Heading down the eastern face of Loch Craighead we followed the fenceline along the eastern shore of Loch Skeen. This path is very boggy in places and needs careful footfall to keep boots from sinking too far but eventually it meets the tourist track at the southern end of the loch.
From here it should be a simple matter of retracing steps back to the car park but in this fading light the rocks which make up the path surface seem to grab at your feet testing your balance. By the time we got to the car it was almost properly dark but we were totally happy.
Loch Skeen and the surrounding hills had been everything I'd hoped for and I will return soon. Definitely with a tripod and some filters and probably when the summer sun is rising to light up the face of White Coomb.

A frosty Morning Around Peebles