Got up with the alarm at 0530 having decided last night that Ben Vorlich / Stuc a'Chroin were the targets for the day; weather forecast was good to excellent pretty much across Scotland and when I saw what a beautiful morning it was decided I wanted something a bit more ambitious to take advantage of the day. A quick refer to the to do list revealed Beinn a'Ghlo as one that I've targeted for completion this year so the decision was made and me, Rudy and Buster headed off from Dundee at about 0615 for Blair Atholl with The Ramones blaring out of the stereo - HEY HO, LET'S GO.

First and only faux pas of the day was pulling into the wrong parking point at the wrong cattle grid. There was a caravan parked there and the dogs went bounding out to have a look only to discover a rather vociferous Boxer was resident therein. A war of barks ensued which woke the human occupant of the caravan from his deep slumber. Fair do's, he didn't seem bothered at all about it. Anyway off I went still blissfully unaware of my parking error only to realise after about 100 meters that there was no gate to go through toward the hill. I also had a look up at this point to find that despite the cracking weather in Dundee Carn Liath's summit was still shrouded in cloud. Still, it looked good and the temperature suggested the cloud was going to head away soon enough.

Anyway, I headed back to the car to drive the remaining mile or so up to the correct cattle grid; I tried, I really did, to get the dogs to be quiet but the Boxer obviously heard us and the tirade re-commenced. Poor guy, again he didn't complain but I did feel bad for him (honest)

If you're reading this I apologise for the mistake and for waking you.

Once I got properly sorted I headed off, just to explain I spent a bit of last week in a lodge in Killin with the wife and dogs but only managed two walks - the first was Meall Nan Tarmachan which was in cloud and winds were gusting over 40mph - I decided not to do the ridge that day as it seemed pointless if I couldn't get the views. Two day later I set off for Meall Corranaich / Meall a'Choire Leith which were successfully negotiated but in sever clag at the summits so no real views on either trip - disappointing and it means I have to do Meall Nan Tarmachan again

Fortunately today the weather picked up dramatically and by the time I got to the wall the cloud had gone from Carn Liath and the day was looking on and good. The views today made up in some way for last week's failures and they kept me going on what was, for a beginner like me, a pretty mammoth walk. This walk is the most enjoyable I've had so far in my short 'career' and unfortunately I did get a bit lax in the photo department however I did get one of the summit of Carn Liath as I approached and a good shot of Ben MacDui(?) from the top of Braigh Coire Chruinn-bhalgain - maybe somebody could confirm if that's MacDui poking out at the top of the photo? I found the summit of Carn nan Gabhar a bit bouldery and it didn't half hurt the feet - and nearly the ankles on a couple of occasions - but the dogs didn't seem to mind it too much, probably in part because this was also the sandwich stop. 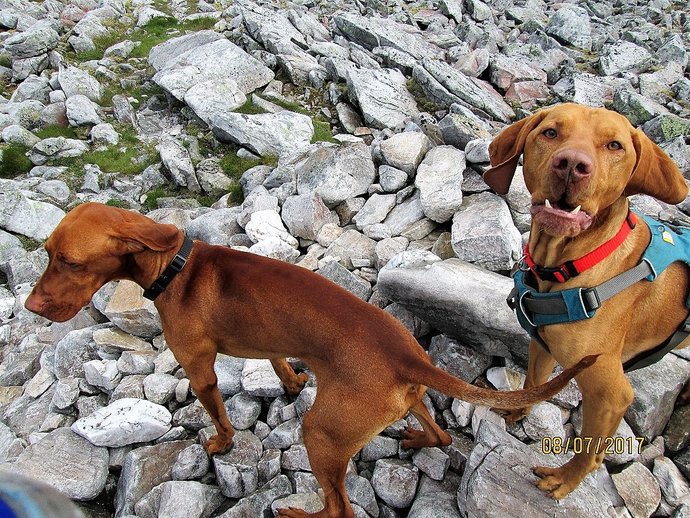 I'm pretty much bitten by this walking bug and have had all the common sense sucked out of me by it. This time last year if somebody suggested walking nearly 14 miles up and down steep, rocky and loose terrain FOR FUN I'd have told them to get right tae .... However I now know that I enjoy it; I still don't know why I enjoy yet it I just know I enjoy it.

If anyone knows why we do it can they let me know? Or are we all just mental?


It's brightening up - no seriously it is.