Epic day climbing Tahurangi on Mt Ruapehu with my lad

I had the good fortune to fly out to New Zealand to visit my son. Part of the deal with the Mrs was that we got one day to climb a mountain.

So after months of planning and weeks of weather watching as New Zealand enjoyed a massive low pressure system pass south of the islands, we finally choose our day, booked two nights in Ohakune and went for it. 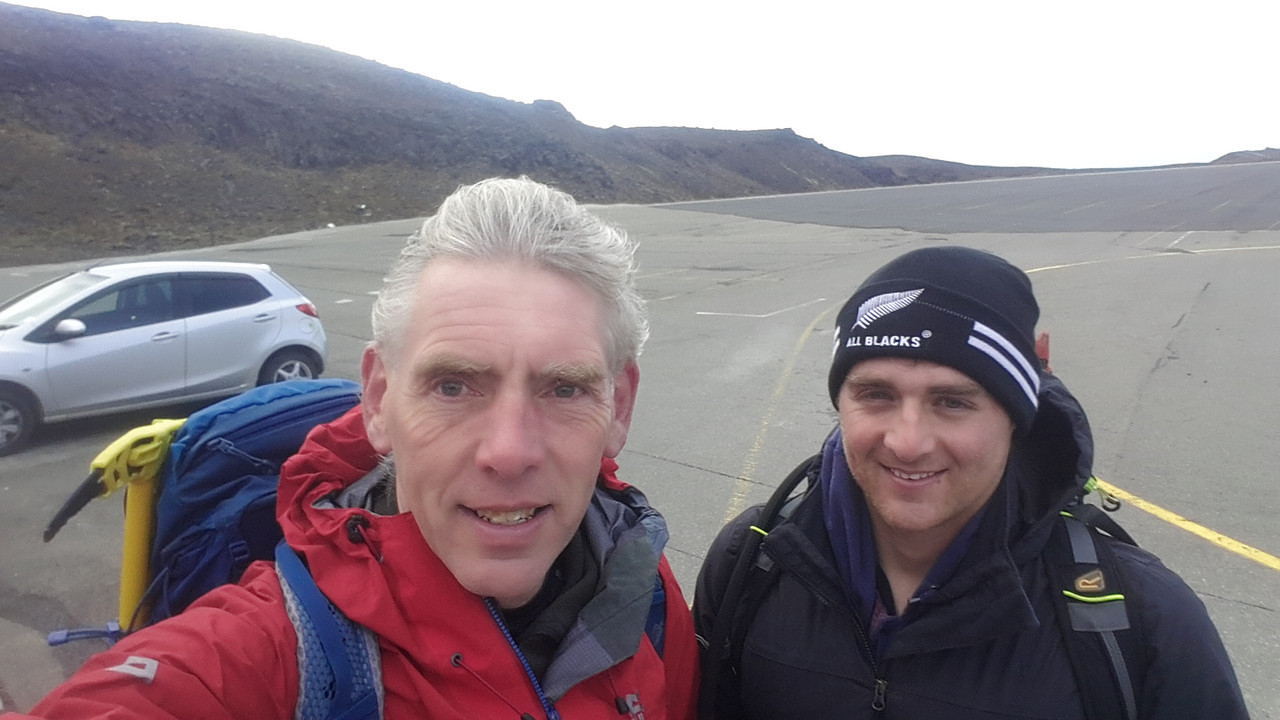 We parked up in Turoa ski center around :07:30 and started up the rocky tracks through the empty ski fields to the winter garden. Then followed the line of the ski lift up towards skiline cafe before cutting accross a small glacier a couple of hundred yards and on to skyline ridge.

Once on the ridge we could finally judge the scale of the climb ahead and to be honest with a stiff breeze blowing accross the ridge I was considering stopping at the base of the ice wall to the summit ridge. But we pressed on for now. 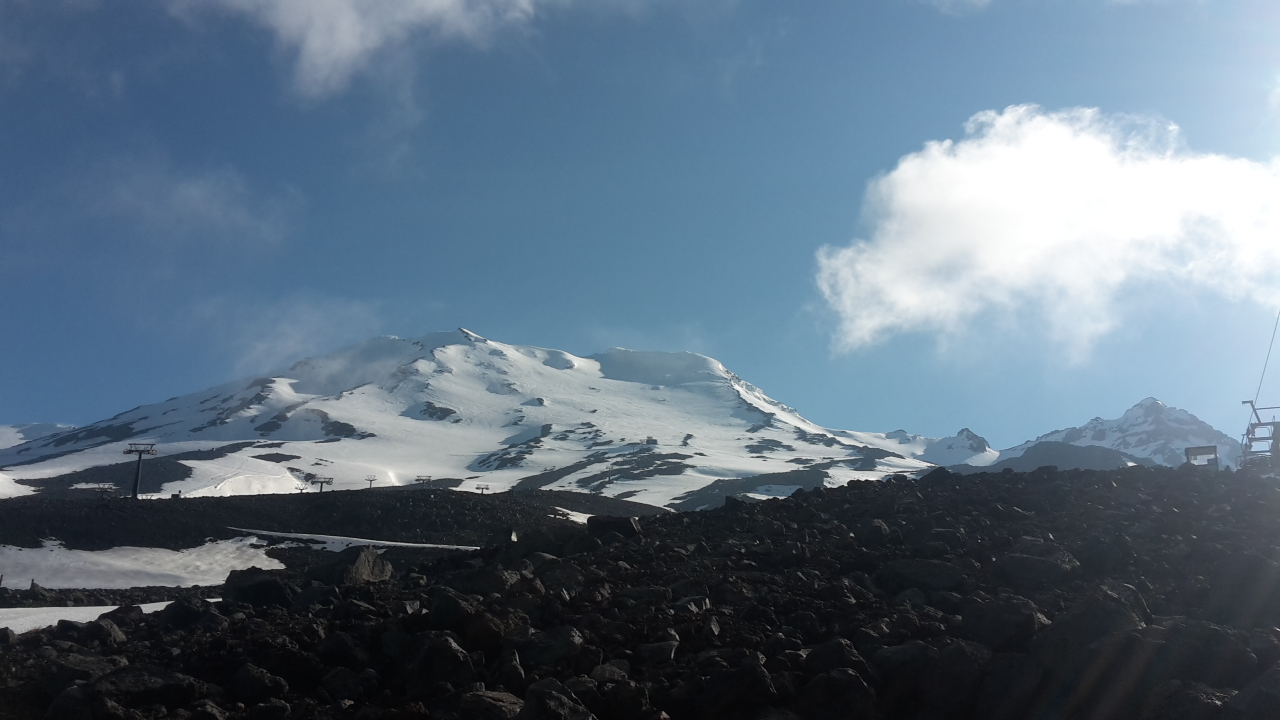 We reached the last rocky out crop on the ridge took shelter had a bite to eat checked our progress against our plan and popped on our crampons again. It was a go.

It's less than 200m up to the gentle summit ridge but it took us another two hours to carve our way up. It's probably 40degrees plus, so not too steep but sections are steeper and we don't get to practice climing on ice that much in SW england. It was so worth it though. The summit ridge is a delight but requires concentration on a blustery day, it's a long way down.

So after a few more minutes on the ridge we reached the breathtaking summit of Mt Ruapehu's highest peak, Tahurangi.

The summit ridge with Girddlestone Peak beyond. 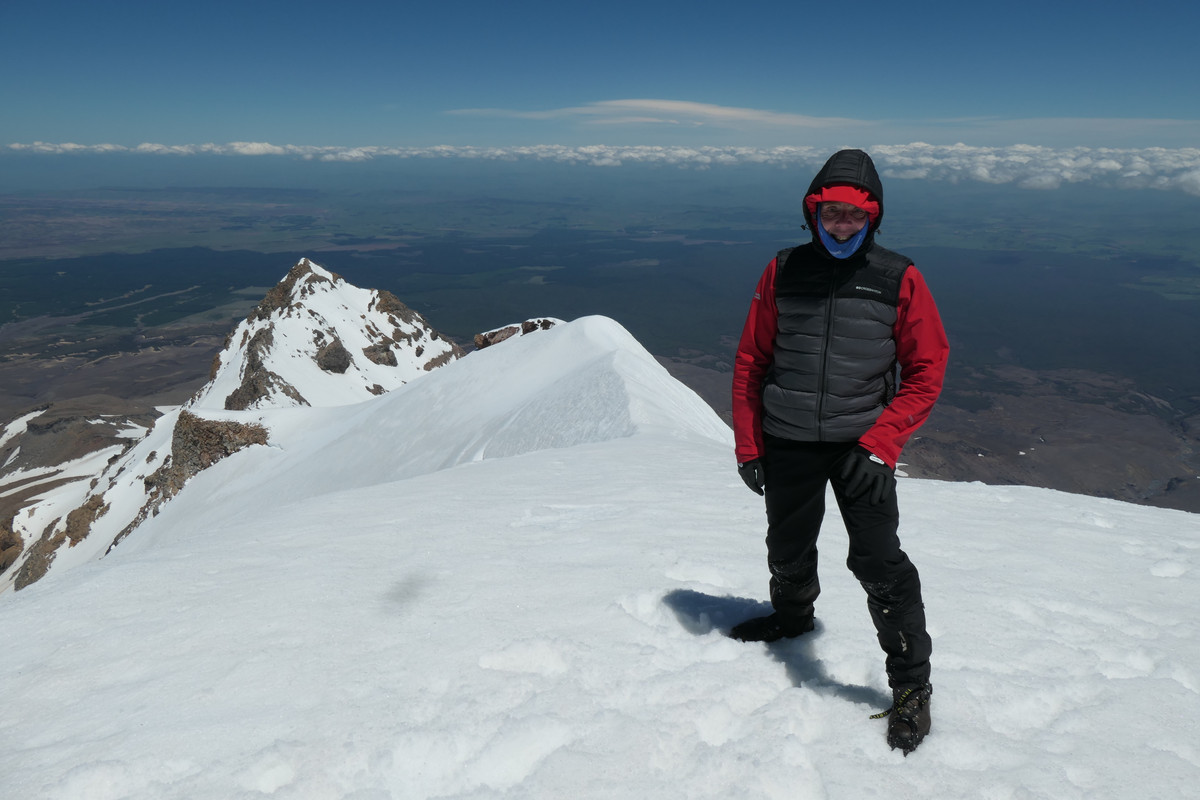 Did I mention where we live in the UK. I'll let you work it out. 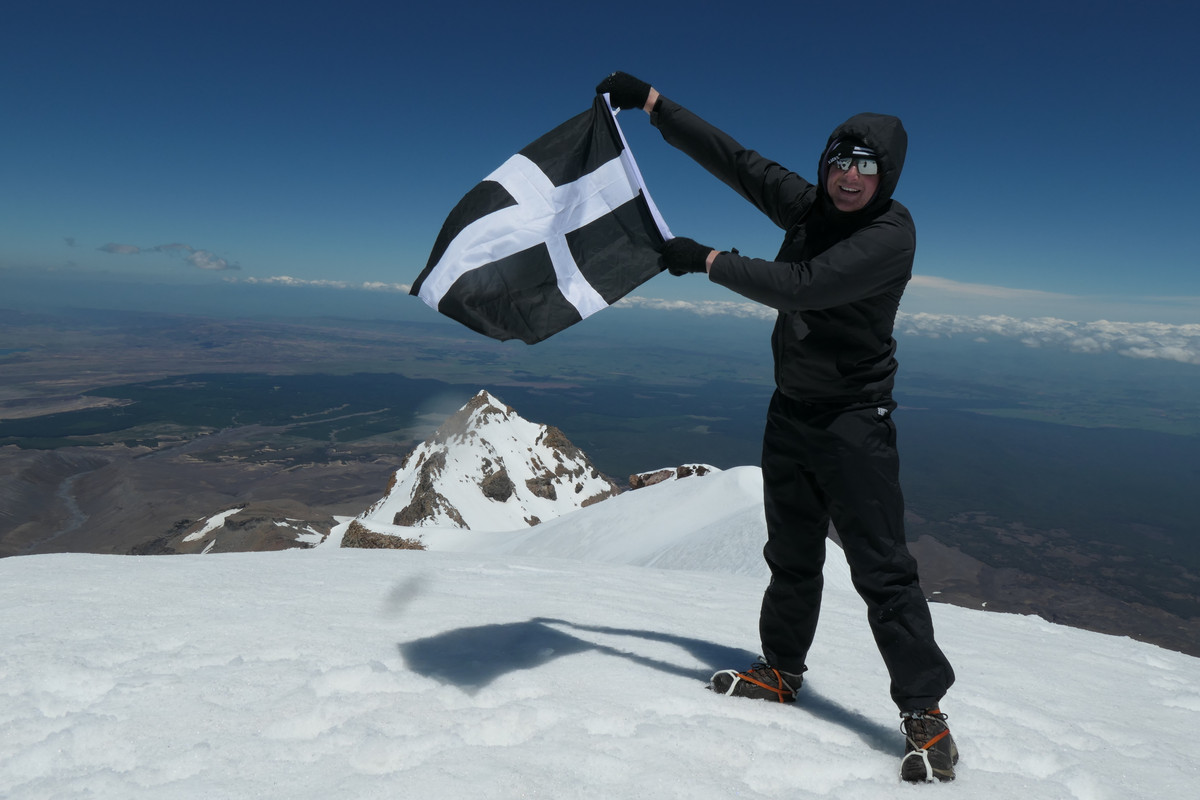 And of course the money shots, Ruapehu's crater lake. What an awesome view that is when you are up there. Though a few climbers have died in it, so not as freindly as it is awesome to look at;) 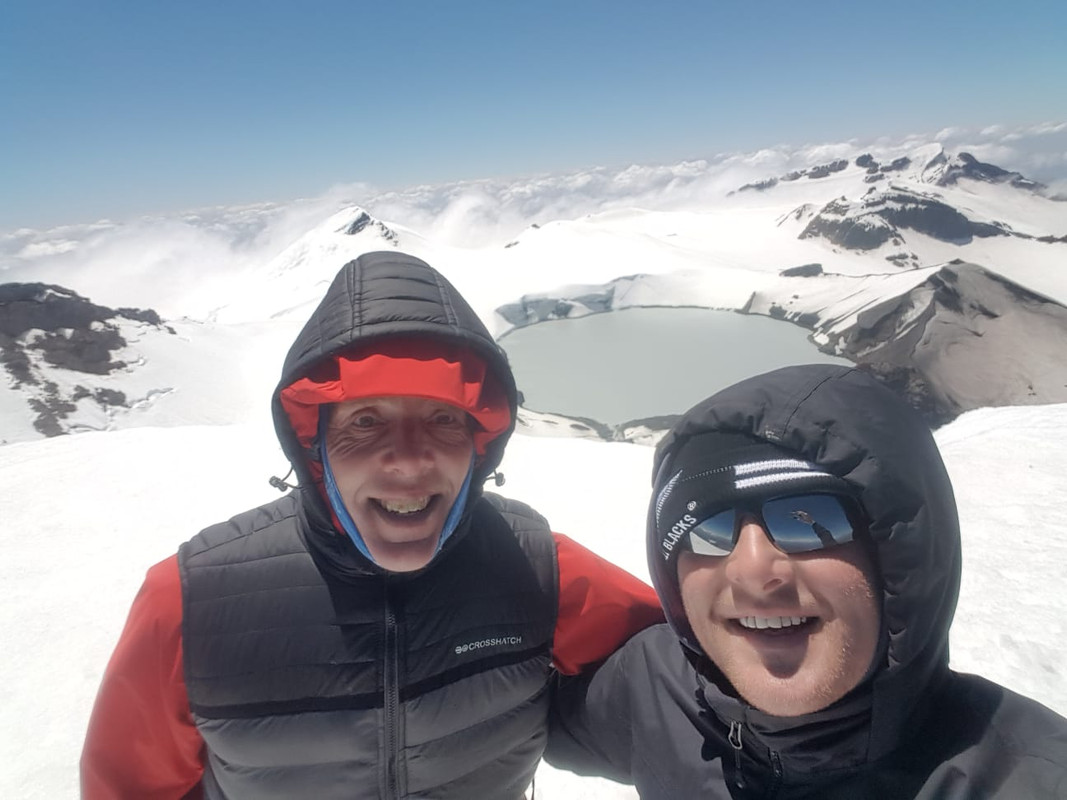 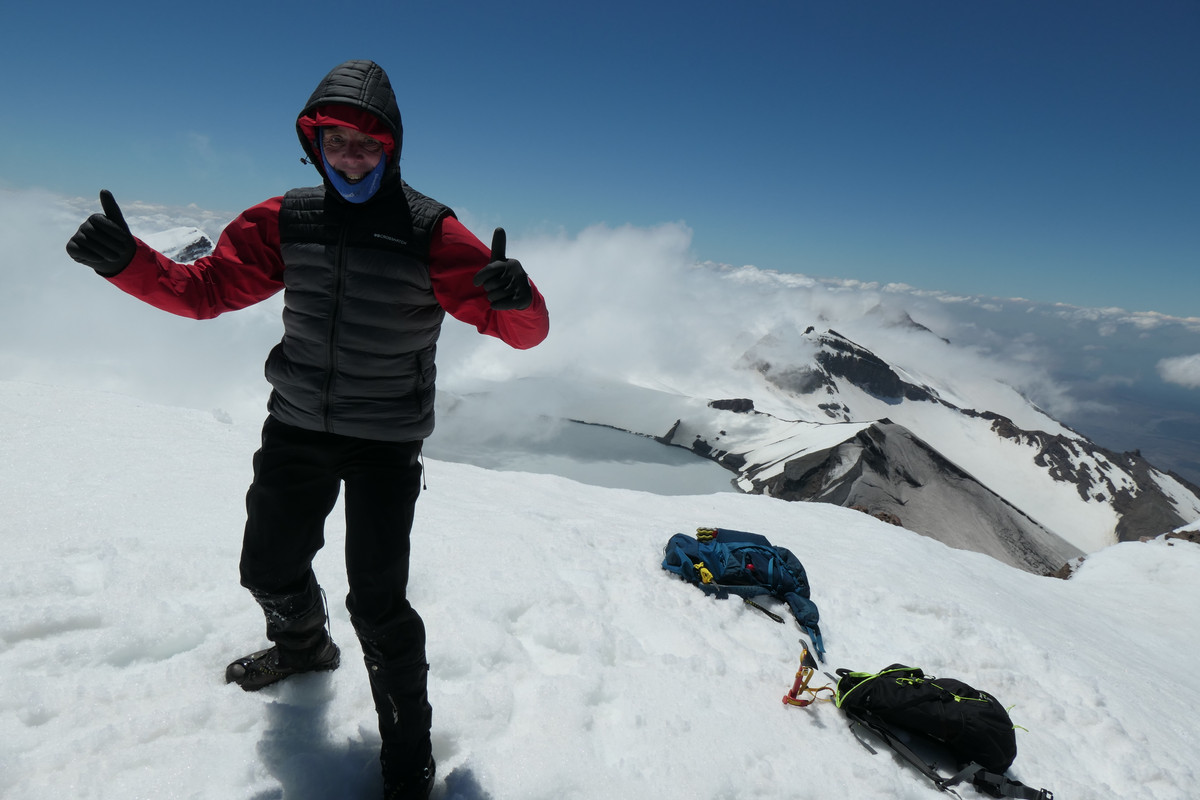 Then after a well earned cup of tea and a cheese roll and with the wind stiffening, we said our goodbyes to Ruapehu and started back down the summit ridge. 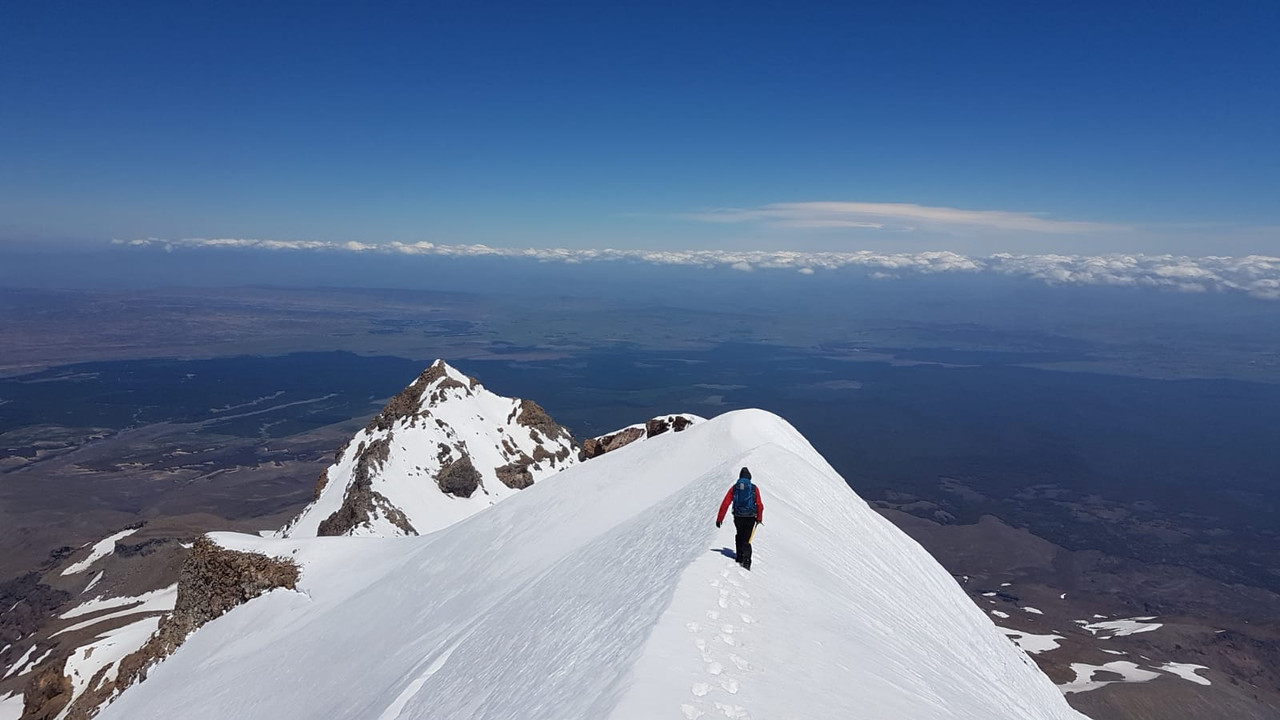 It was a full seven hours since leaving the car park as we started the icy decent to skyline ridge. The mornings sun had weakened the surface and the stiff wind was now making life far more testing than earlier. My son had little trouble but it took me a full two and a half hours to get back down to the relative safety on the rocky windswept ridge. For the first time that day we spotted another team heading up, but they turned away before they reach us. I suspect watching my old bones clinging to the icy face and observing my painfully slow progress may have influenced their decision. It was a wise one conditions were not good now and we would be the only climbers on the summit today.

Once on the ridge it was still hard going as the wind picked up ice crystals from the show feilds to the north of us and pelted us with the most beautiful painful hail for the next hour.

We finally reached the base of the ridge a hundred meters or so above the empty ski fields and headed back out on to the gentle slopes to the center of the snow above the final lift. From there we simply sat down and enjoyed 400meters of playful sliding down the slopes what great fun after a hard day's climbing. Wish I could upload some video of that for you.

Any way back to rock, axe away and pleasant stroll in the Lee of the wind, down the tracks the last few hundred meters back to the car park.

One final shot my wife took from Ohakune, whist we were on the mountain. 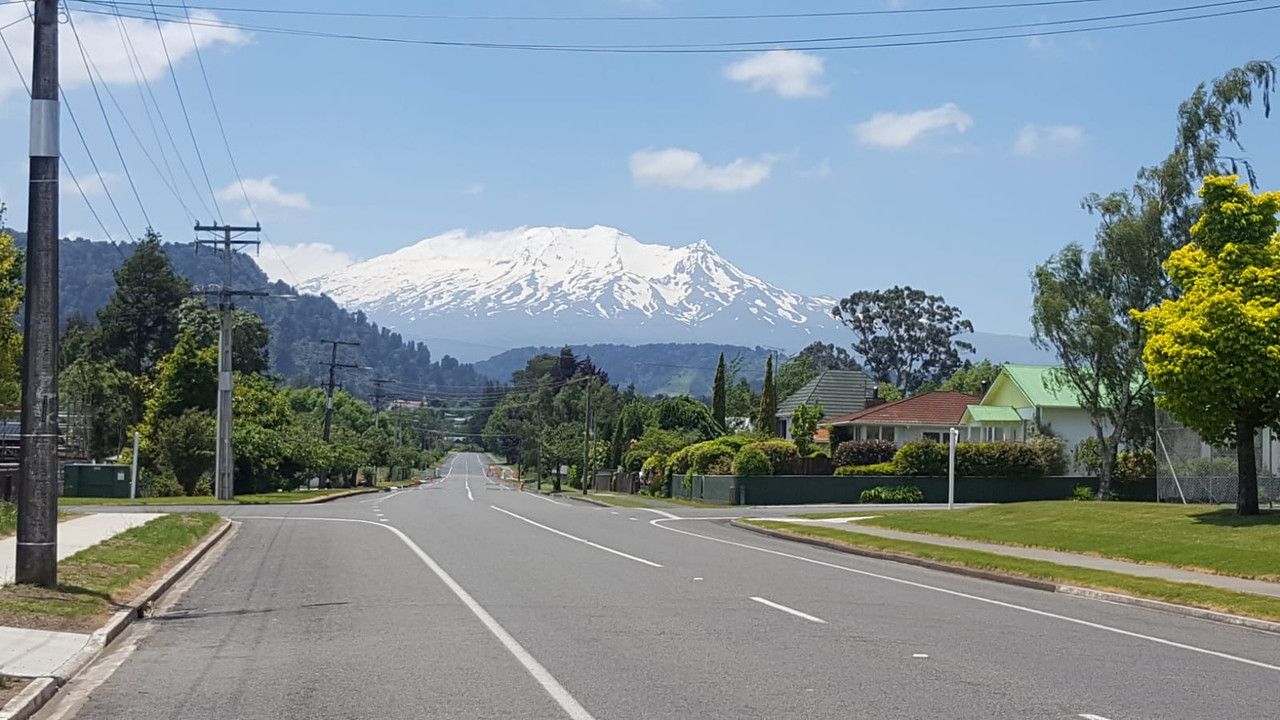 What an epic day. One we shall not forget. Hope you enjoyed the post.
Click to mark this as a great report. Register or Login free to be able to rate and comment on reports (as well as access 1:25000 mapping).

Modest Am Mam, Worth a drive up to Skye for.

Ben Nevis via the CMD Arete from Corie Leis