We took advantage of the break in the weather today to make our final trip of 2015 to the Brecon Beacons National Park.

Cefn yr Ystrad is the sort of mountain I'd never have found out about if I hadn't wondered how many mountains there were in the National Park and set myself the challenge of climbing them. I planned that the four of us (me, husband and two sons) would tackle it from the Pontsticill Reservoir as a circular route, but after my husband had to duck out having left his waterproof coat at home I made it a quicker up and back walk. Aside, that is, from some meandering about on top, dodging sink holes and wondering why the summit wasn't getting any nearer

We parked on the road at the south-east corner of the reservoir and headed down the road to pick up a bridle way under the railway line. The going was muddy but not too steep at this stage but with dirt bikes buzzing around it was hardly a peaceful experience. After a brief shower, the clouds gradually lifted and visibility was good.

With a few diversions, we followed a bridleway to where the map said there was an inscribed stone. Sadly we didn't find it. At this point we headed off up the steep slope towards the summit. The boys cheered up at the sight of rocks to climb over.

As the ground levelled off a bit, I thought the job was nearly done, but somehow we managed to circle round without getting any nearer to the peak. There was no excuse with such good visibility. I definitely wouldn't want to be up there in the mist.

Having dodged innumerable shake holes, we finally reached the cairns and trig point on the summit. Going from the map, I thought the trig point was the summit, it appears it might have been one of the cairns. I'm no peak bagging purist, after all we were never sure we'd found the exact summit of Black Mountain or Black Mountain South. As far as I am concerned we bagged this one and I am in no rush to return! 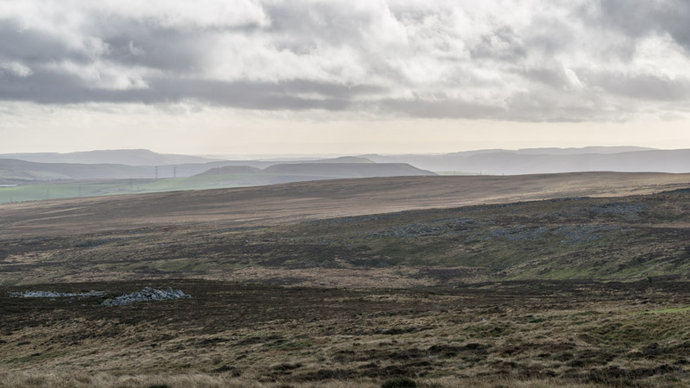 View south from near the summit Pen y Fan and others across the quarry

Although it was still unseasonably warm, it was very windy on the summit, making it feel much colder. I was also keen not to keep my husband hanging around waiting for us to return for too long. Rather than retrace our steps, we managed to find a path and then a track that took us to the fence round the edge of the quarry. This made navigation much easier, we followed that to the end and then headed back downhill to the bridleway. Given this was our 13th Hewitt, it was a strange coincidence to find a rusty metal flag with a number 13 on it as we descended.

The sun was out as we headed back down the lower slopes of the mountain. Pen y Fan and its neighbours were now very clear to the north. The main problem was the slippery mud, not even my usually careful eldest son avoided slipping up. Sunny views of the central Beacons on the way back

As we descended towards the road, we caught a glimpse of one of the Brecon Mountain Railway steam trains steaming along below us. It hadn't been the walk I'd planned and I can't pretend this is my favourite peak. Perhaps it would be better approached from the other side? Its main plus point is the excellent views to the north, so if you're going to do it, choose a clear day.
Click to mark this as a great report. Register or Login free to be able to rate and comment on reports (as well as access 1:25000 mapping).