The rosy picture above was taken one evening about 6 years ago along the road below Stac.
We’ve driven past the elongated pyramid countless times on the way on and off the Coigach peninsula and paddled below it a few times, too. Now, having climbed just about all the main hills in the area, I decided it was time to knock it off. Sgorr Tuath is the name, I’ve lately learned.

Another motivation was a curious twisted sandstone pillar located somewhere near the summit.
Could make a nice picture and for some reason it reminded me of similarly rosy Aniseed Twist sweeties from the 1960s.

The weren’t particularly my favourite, but some regressive synapse must have made the connection.
I think Old English Spangles may have been my gateway drug.

Here it is from the Fiddler: the dark band peeping behind Beinn an Eoin of which it seems to be classified as a subsidiary peak. The 50k OS map sort of suggests this which makes sense as ‘Tuath’ means north peak and there’s a Sgorr Deas (‘south’) on the other side of the 430-m saddle and unnamed lochan.

Considering Tuath is less than 2km from the road (OK, and over the loch) it’s surprising how few reports there are here on WH, presumably because it falls 68’ short of the magic number and a metre short of another category.
Rohan 2015: https://www.walkhighlands.co.uk/Forum/viewtopic.php?f=9&t=56908
BlackPanther in April: https://www.walkhighlands.co.uk/Forum/viewtopic.php?f=9&t=80178
(great photos)
From the south, even dodging BM-Coigach it would be quite a roller-coaster slog.
It seems the usual way is in from the east end of Loch Lurgainn over the bogs around Lochanan Dubh.
How lovely.

Wading the narrow outlet at the west end of Lurgainn could be another option. I’ve been there and even with the current dry spell (the driest in many years) the Loch is only a few inches down. You’d want a solid staff to get across. If it was me I'd soon pre-emptively fall in and swim it.

But with a boat it’s just a 10-minute paddle from the sandy beaches south of the Stac car park over the narrowest part of Loch Lurgainn to another sandy bay. From there the 500-metre climb via the west ridge added up to less than 2.5km. 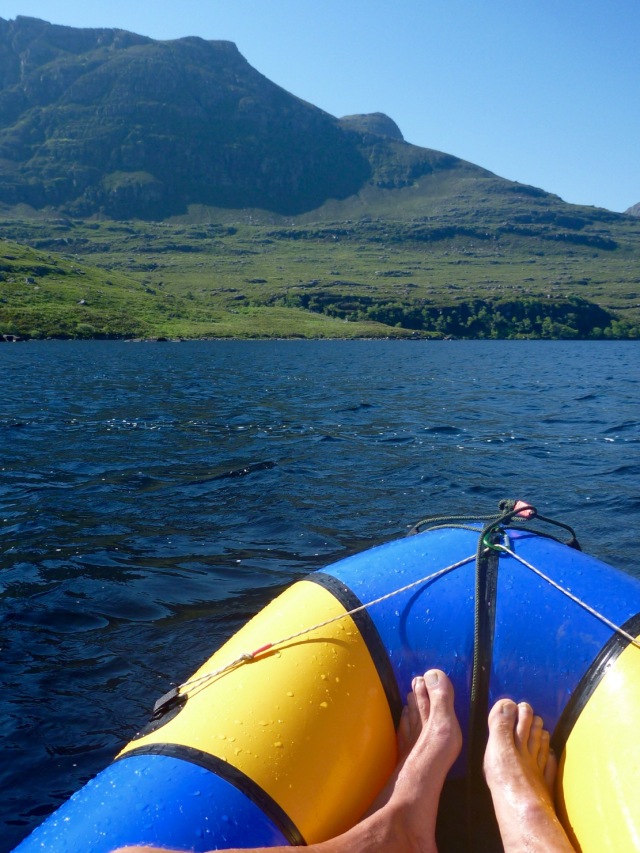 Of course no one said the short climb wouldn’t be a steep, pathless, ankle-twisting, shin-scratching slog; the Mrs foresaw all this and decided to read the paper then admire the pipers at Achiltibuie's Coigach Gathering instead.
Me, I was in need of a good work-out.

Nearing the beach below Sgorr. Little did I know what hell awaited me there.
Click to mark this as a great report. Register or Login free to be able to rate and comment on reports (as well as access 1:25000 mapping).


The ever reliable Achnahaird Bay circuit