Fannichs.gpx Open full screen  NB: Walkhighlands is not responsible for the accuracy of gpx files in users posts

7 hills sounded a lot for my knees, but with them being newly refurbished and in need of a test I decided to have a crack at the sourthern Fannichs. I’d been tossing up the idea of a lazy start with a high level bivvy on this ridge for months, but having checked MWIS whilst sat in the car after a particularly soggy Sunday on Morousig (the wonders of mobile internet!), the thought of temperatures dropping as low as 5 degrees quickly put a stop to that. Instead I would cycle up to Loch Fannich dam and camp. Not being a natural cyclist I was delighted to find the 9km or so of road to the dam being of a tarmac nature (I despise cycling on rough tracks ever since a sore bottomed ride into the bothy at Senna Braigh) and nowhere required the pushing of the bike which is a rarity for me. Mercifully a breeze kept all the midges away and knowing I was going to have to take it easy opted for an early night and even earlier rise. The bonus of the 5.30am start was a great sunrise, the downside was a sleepy brain and after reaching the start proper 2km later I realised I’d left the map in the tent; so much for an early start and energy conservation! I was back at the bridge over the Altan Glas an 40mins later with the bike to tow (why didn’t I bring it first time!?) and ready to climb proper.

I followed the burn up initially (there are no paths here), but being aware it is shooting season moved across to the broad south ridge of An Coileachan before entering the corrie proper. In a little over an hour up nicely angled ground the biggest climb of the day was behind me and the first summit, and fabulous views were encountered. Beyond this it is a wonderful high level promenade on gentle slopes over Meall Gorm all the way to the foot of Sgur Mor. 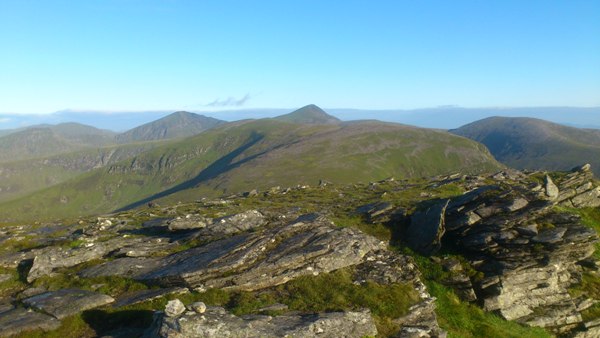 The route ahead to Meall Gorm, Sgurr Mor and Beinn Liath Mhor Fannaich There is a very useful freshwater spring just below the stalkers path as it turns around Sgur Mor in the direction Beinn Liath Mhor Fannaich, one of the few sources of good water I found on the ridge. Knowing I would need to return from the outlier hill I left my bag by the peculiar stone shelter. From the summit of Sgur Mor (4th of the day) the sea can be seen to the east and west, perhaps one of the few mountains on this island where this is possible. The descent from here was a test of the knees, but the good views to An Teallach kept my mind on future conquests. From here the route is straight forward; the last three hills and the way back make a straight north-south traverse, continuing over Sgurr a’Chadha Dheirg. Seventh and final summit of the day, Sgurr nan Each, a welcome sight! The peat hags on Torran Ruadh offer a sore test late in the day, and are probably best turned on their right, but having taken every other peak on the walk (munro or not) it seemed rude to miss it out by dropping west to the estate track to soon. An easy walk off its nose led to the estate track where it emerges from a plantation, and a 4km stroll back past the impressive Fannich Lodge brought me back to the bridge over the Altan Glas. North-West end of the ridge from the estate track along Loch Fannich. Easy going from here thankfully!

I’m a bit surprised I don’t see more made of this as a possible route for doing the seven southern Fannichs. It takes in all seven hills in a long (9hrs; 2200m ascent; 28km) but relatively easy round (considering the ascent and distance), which is a fantastic high level promenade with wonderful views (particularly to the NW) keeping An Teallach and Slioch for company most of the day. I fully recommend the virtues of this route walking the Fannichs.
Click to mark this as a great report. Register or Login free to be able to rate and comment on reports (as well as access 1:25000 mapping).


A wander and a ponder up Beinn Bhuidhe