Centre of the Cuillin, via the Sgurr Thuilm ridge

The first and second Munros I ever climbed were Blà Bheinn and Sgùrr nan Gillean in 2005, at the age of 22. I returned to Skye in 2008 with a university friend and stayed at the Glenbrittle youth hostel (travelling without a car and walking down from Sligachan, where the bus had dropped us off). For reasons that will become apparent, we climbed only one Munro on that trip: Sgùrr Alasdair, in howling wind and thick cloud.

Our route up was a scramble from Coire a' Ghrunnda (from memory, not such a difficult route, except for needing to pick our way over and around some boulders). But navigating via paper map and iffy compass, we missed the top of the great stone chute for our descent and started down a different scree slope. It turned out, once we were out of the cloud, that we were descending Coire an Lochain (NOT a route I would recommend) and we ended up near Loch Coruisk, trapped in the Cuillin horseshoe. Worse, I had tweaked my knee on the way down and was no longer capable of bending it without considerable pain. Walking significant amounts of uphill was not an option. We spent some time seeing if it was possible to walk along the coast back to Glenbrittle -- it was not, at least, not without much ascent, as the rocks drop directly into the sea. So we walked the 11km path back to Sligachan, drank away the cold, and opted for a taxi to Glenbrittle.

The Walkhighlands website says: "the ridge from Sgùrr Thuilm involves very hard scrambling, beyond what would be featured on Walkhighlands". And the walk would involve the climb down into An Dorus, and up the other side, to get from Sgùrr a Mhadaidh to Sgùrr a Ghreadaidh. Again, the description on Walkhighlands seemed forbidding: "to climb Sgùrr a Ghreadaidh, the wall on the south side of the An Dorus gap is climbed - a steep, stiff scramble - bear in mind that you will also need to be able to descend this way. A rope may be required, particularly if the rock is wet." I was going to be by myself and without ropes, and in the days leading up to the walk I was a little worried I might have bitten off more than I could chew. However, Ranger's report "Scrambling heaven around Coire a' Ghreadaidh" (https://www.walkhighlands.co.uk/Forum/viewtopic.php?f=9&t=21890) described the route I wanted to take, and it seemed quite doable. Additionally, the weather forecast was excellent. So 30th August saw me heading down the single track road to the Glenbrittle youth hostel, from which the path would begin.

The route up into Coire a'Ghreadaidh is beautiful, at least in the sun. It is not too steep, and the path passes and then crosses a sequence of waterfalls. 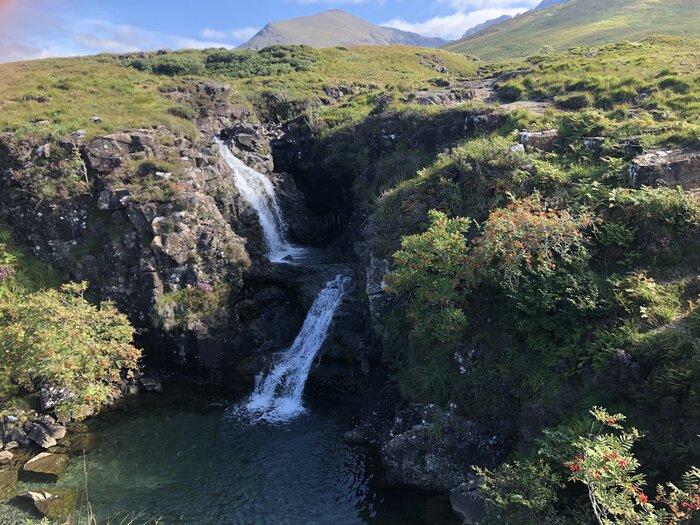 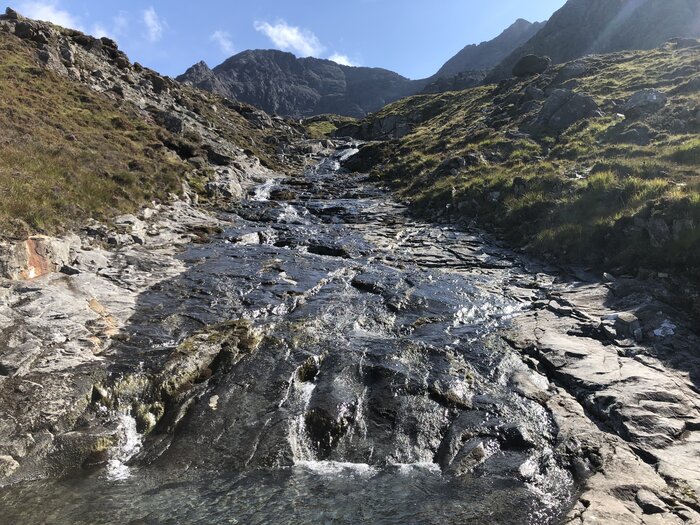 But you can see the flank of Sgurr Thuilm in the first picture, above the waterfall on the left (and in some of my later pictures below). It is a steep, pathless grind of 350 metres, with the one virtue that the views south to the sea open up soon into the climb. 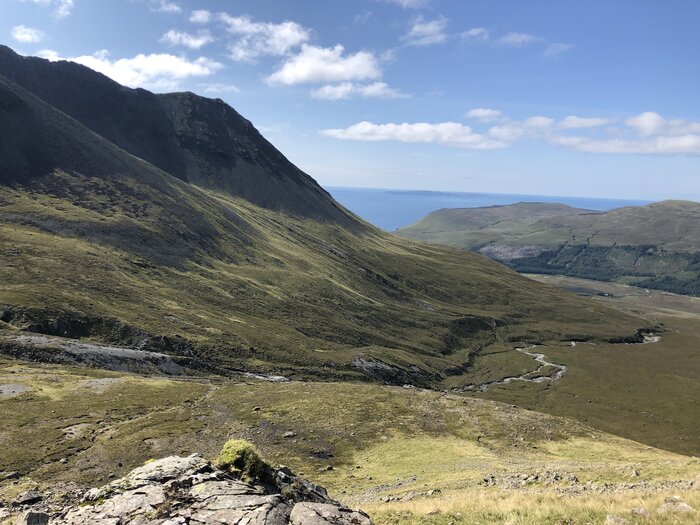 View back down towards Glenbrittle

Once onto the ridge, the gradient eases considerably. Sgurr Thuilm is a fine rocky ridge walk, not particularly narrow, but narrow enough to make you feel as if you are walking above the world. I could see my intended route up to the Munros ahead. 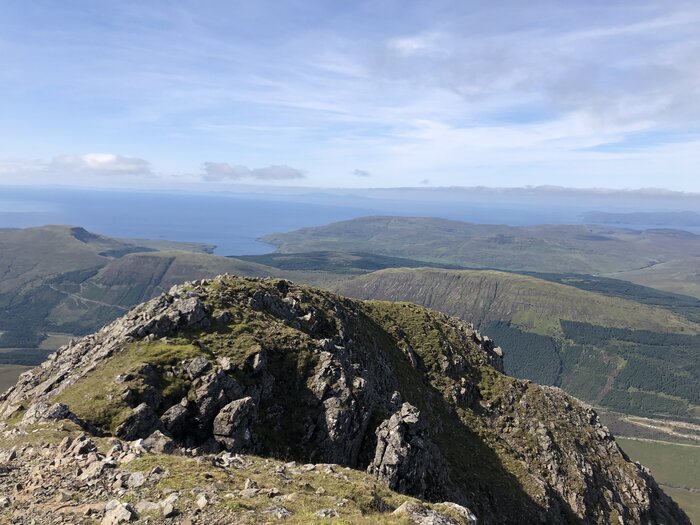 Getting towards the top of Sgurr Thuilm 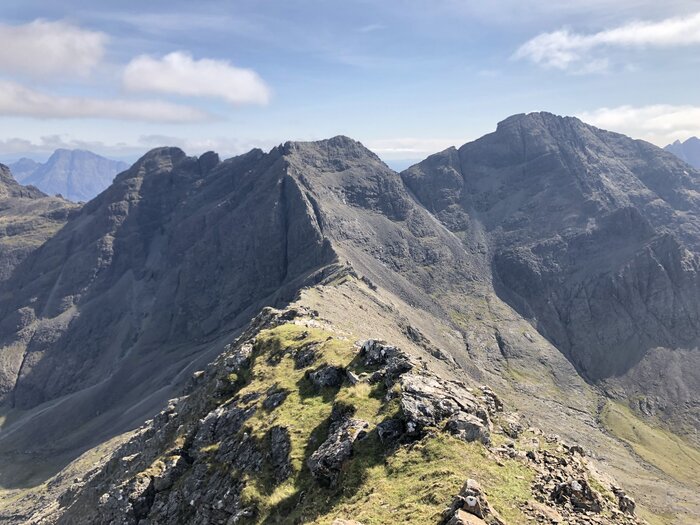 (The route up ascends the buttress between the two gullies in the picture above.) 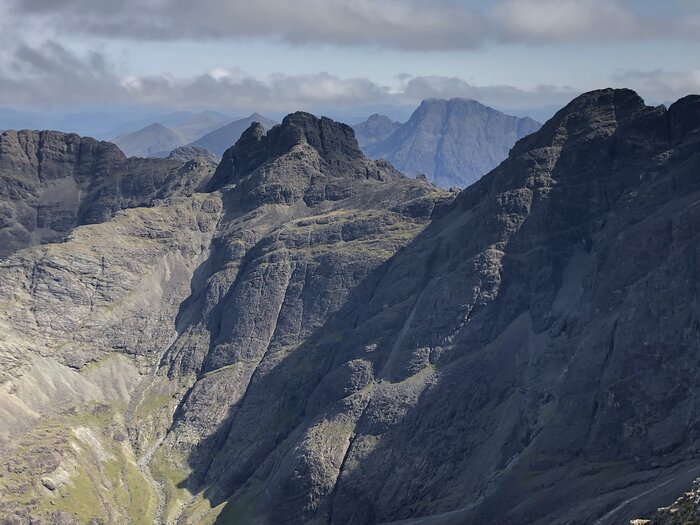 Blabheinn peaking over the ridge

I approached the ridge cautiously, taking each segment in turn. As it turned out, however, I need not have worried. It is a little difficult to give both a general and a useful description of how challenging a scramble is, because people find different aspects difficult. Personally, I am not especially bothered by exposure; my brain doesn't work that way. What can scare me is a exposure combined with the chance of falling, for example where the holds are small (or lacking), or where the terrain is loose or slippery. It is possible, therefore, that I am underselling the challenge of this route when I say it is on the easy end of a grade 3 scramble, and certainly easier than the ridge between Sgùrr a' Ghreadaidh and Sgùrr na Banachdich. There is some exposure, although it is not as much as, for example, Crib Goch in Snowdonia. Staying on the crest of the ridge, there are plentiful holds on firm gabbro. And although easier than expected, it is a thrilling route up the mountain, over all too soon.

I took a few pictures to try to give some impression of the ridge from different angles. 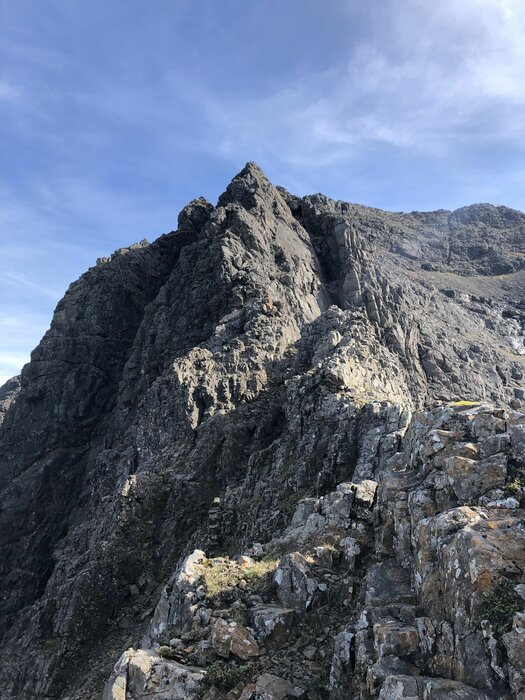 The scramble up to Sgurr a Mhadaidh 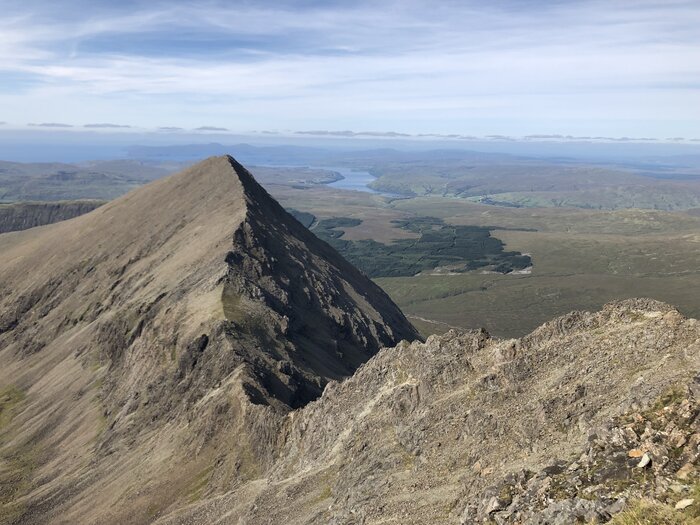 Looking back along the ridge (slightly less intimidating)

From the top of the ridge, it is a short scramble to the top of Sgùrr a' Mhadaidh. I opted to traverse around the side towards An Dorus, finding there was somewhat of a path, before striking up the shelves of rock to the summit. On the sunny day the views from the summit are ... well ... good. (And they were going to be bettered later on.) 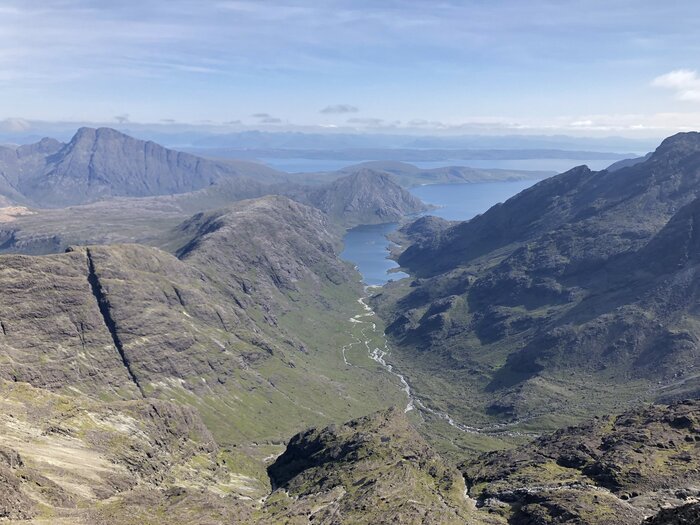 Loch Coruisk, which I'd accidentally visited before 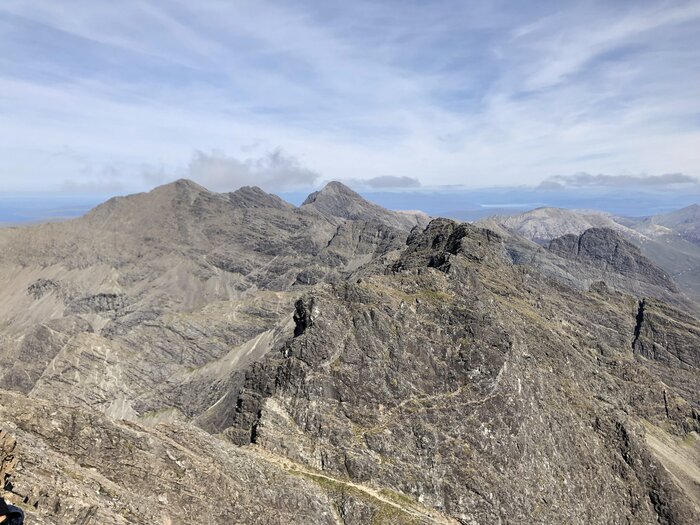 Next on the itinerary was An Dorus, the cleft in the ridge between Sgùrr a' Mhadaidh and Sgùrr a Ghreadaidh. Looking ahead, the second peak dwarfs the first, making Sgùrr a' Mhadaidh seem like a mere top. The descent from Sgùrr a' Mhadaidh is a very steep stony slope, needing care to avoid slipping. I had looked at some pictures of people climbing the south wall of An Dorus before trying it. From the very top of the pass, walk around five or so paces downhill towards Glenbrittle. It is then possible to step up the rocks and pivot to the left (so almost facing the top of An Dorus again). From here, the climb is very straightforward in the dry -- the rocks almost form a ladder -- and it is not exposed. 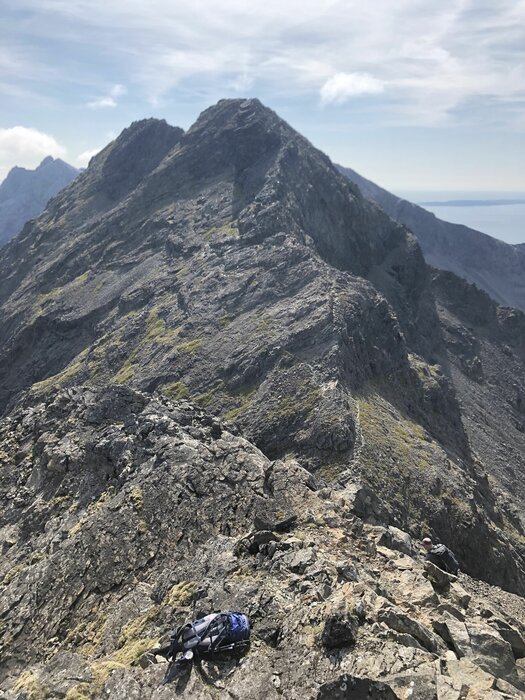 The path up Sgùrr a Ghreadaidh, with the Wart near the first summit 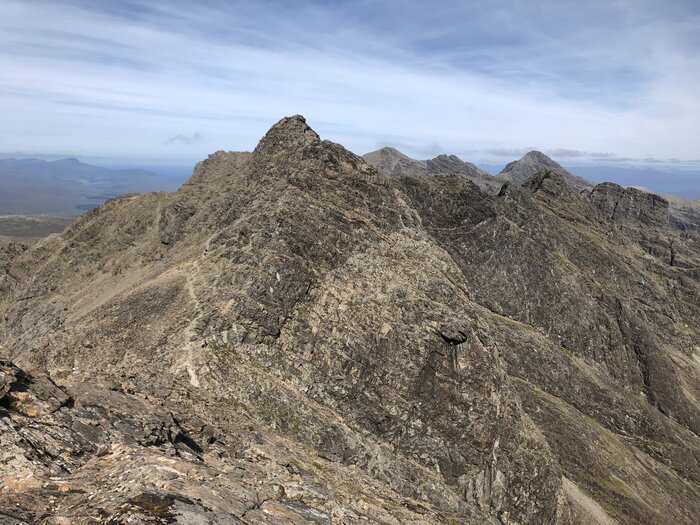 Despite my earlier fears, I now felt a little cheated out of the expected difficulty. Consequently, rather than following the ridge to Sgùrr a Ghreadaidh and moving out to pass the huge block of rock called the Wart on the right, I went around to the left, which required climbing some shelves of rock with few good handholds. My difficulty-demon sated, the route to the top was straightforward, and from the summit the views south were unbelievable. 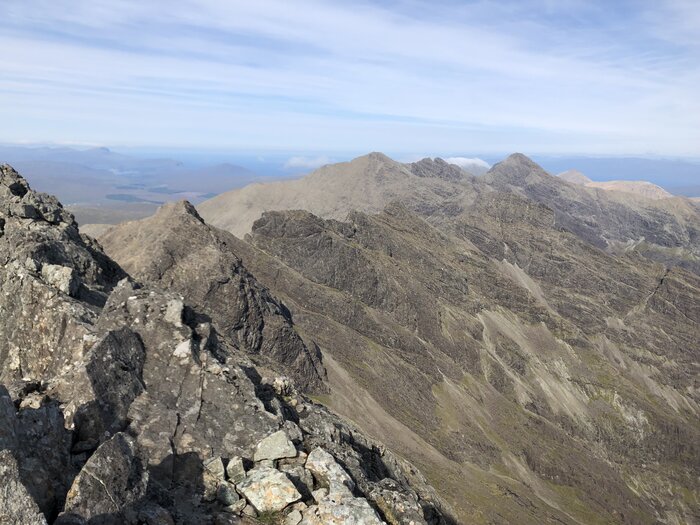 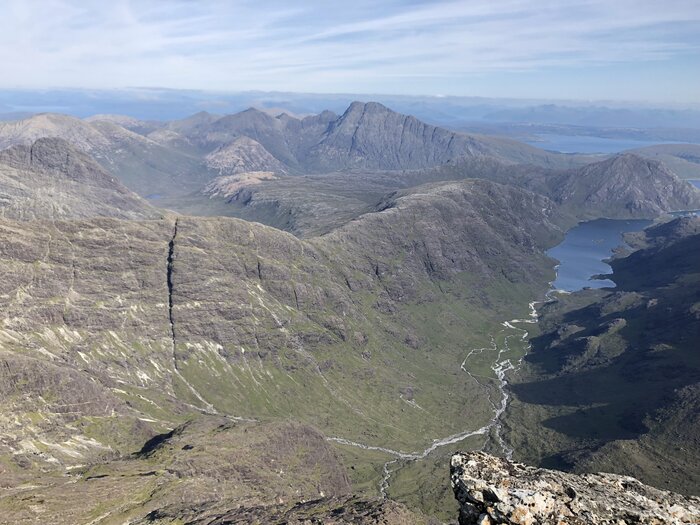 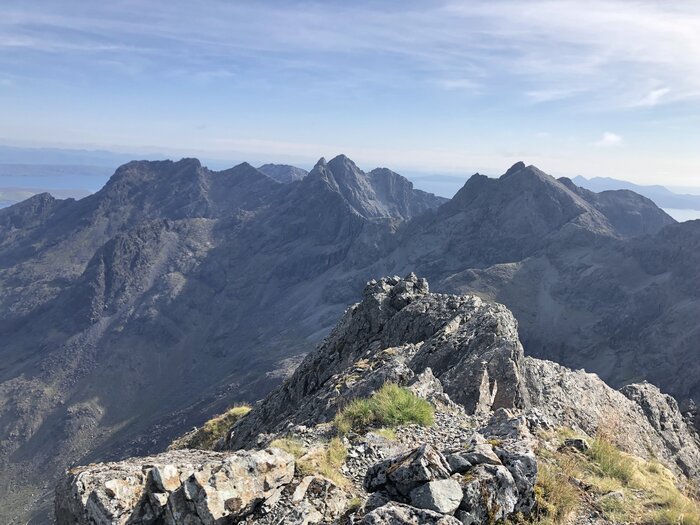 The ridge to the south to the second top of Sgùrr a Ghreadaidh is narrow but not difficult. However, the descent from the ridge and the ascent towards Sgùrr na Banachdich is tricky. First, when heading south, there are several steep down-climbs, and then towers of rock (fun to climb, but not straightforward) on the ascent to the third Munro. 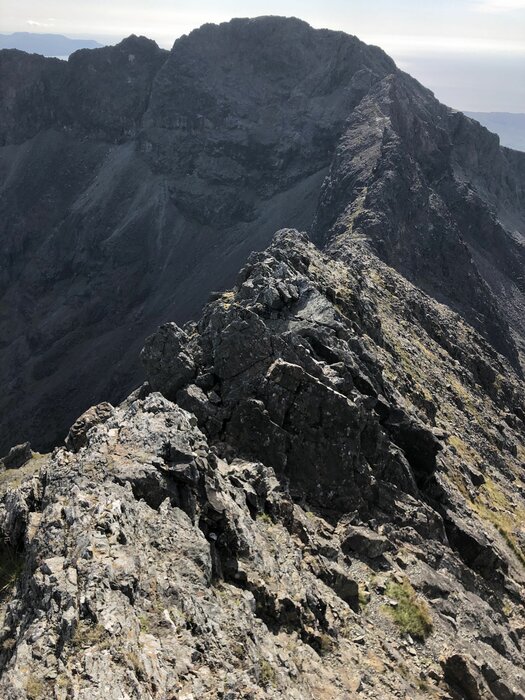 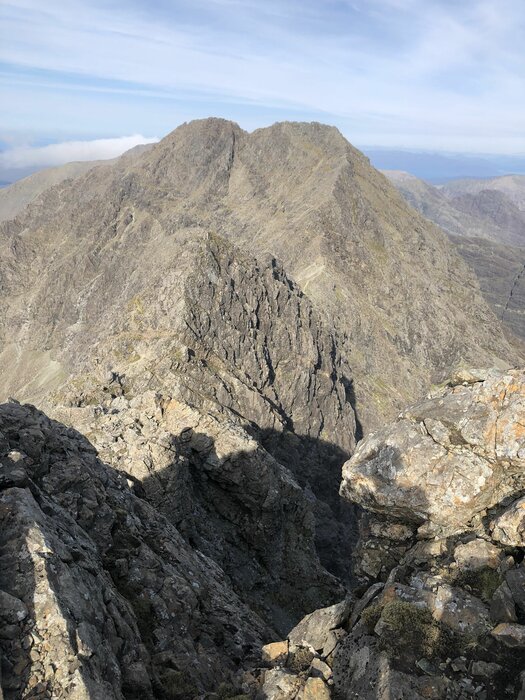 Looking back north along the ridge 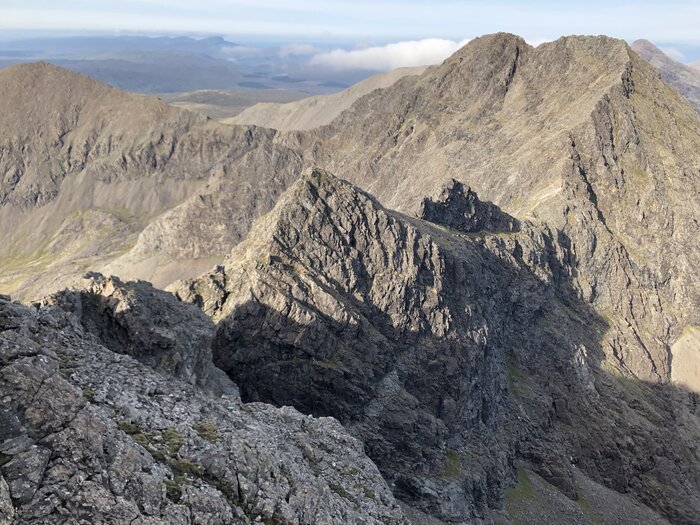 Close up of the towers

The top of Sgùrr na Banachdich is spacious, a comfy place to sit and look out at the Inaccessible Pinnacle, the improbably steep twin spikes of Sgùrr Mhic Chòinnich and Sgùrr Alasdair, and the sea spreading south to Rum. 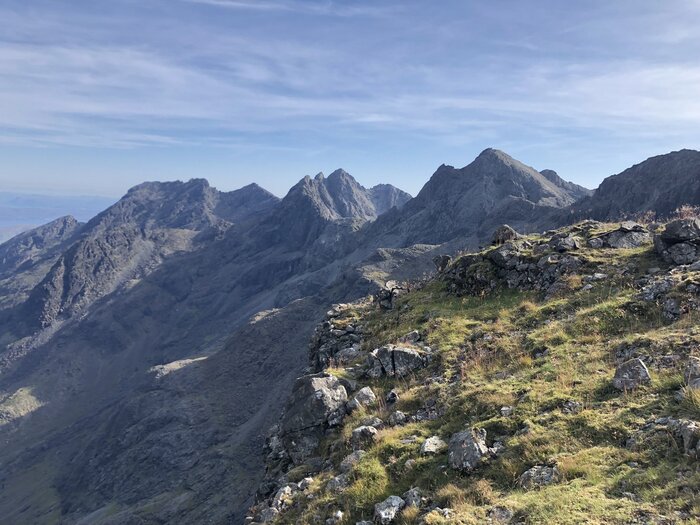 The southern portion of the ridge 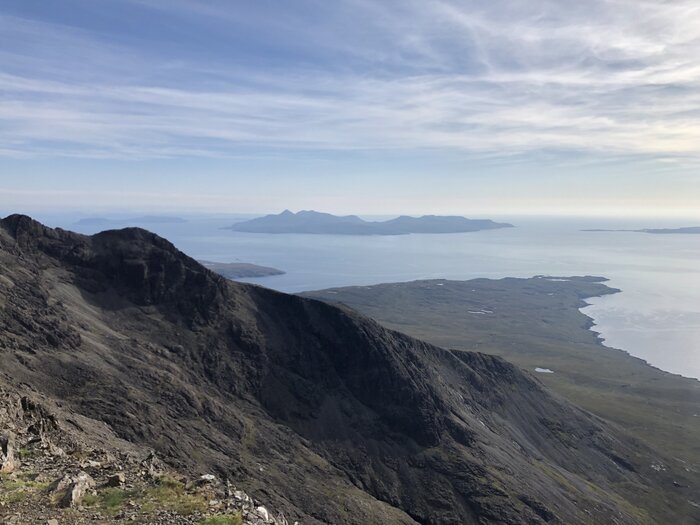 Looking out to the Rum Cuillin 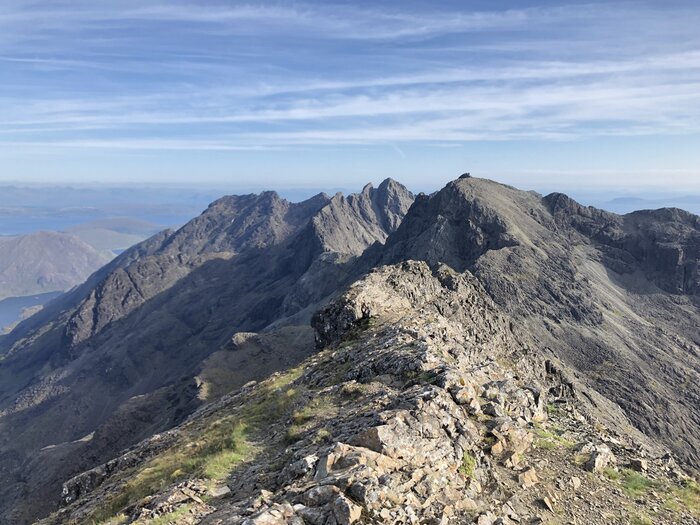 The path back down into Coire a'Ghreadaidh is fairly clear, but descends very steep, loose scree before the base of the Coire. I was pleased I had decided to bring my poles with me, although they had been largely useless on the ridge. A look back at the three Munros. The ridge from Sgùrr Thuilm is on the left.

Hopefully, it will not be another 13 years before I get to return to Skye again. The shadow of the 2008 trip has lifted. 2023 is a possibility, when I turn 40. Collie's/Hart's ledge, and the west ridge of Sgùrr nan Gillean are calling.
Click to mark this as a great report. Register or Login free to be able to rate and comment on reports (as well as access 1:25000 mapping).

Ben Alder on foot in a day

An icy end to lockdown; routes from Braemar in the snow