This summer I was fortunate enough to be part of a trip to St Kilda and in April 2010 I got out to Skellig Michael just off the south west coast of Ireland. Both were incredible places to visit and make for an interesting comparison...

Our rib to St Kilda left from North Uist. Conditions were by no means rough, but not being used to boats, the hour and a half ride still felt like a rollercoaster to me. Maybe choosing a seat at the front wasn't the best option! About 5 miles from Village Bay, the islands became much clearer, Another 20 minutes or so and we were within sight of the bay, 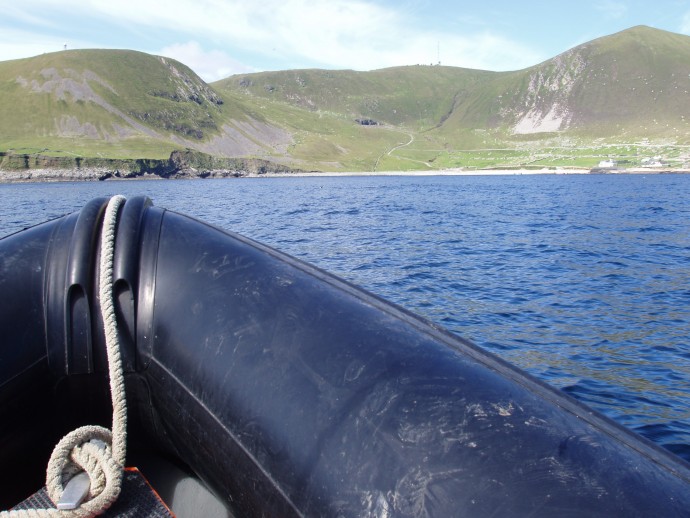 A huge number a sea birds were visible, including hundreds of puffins in the water, Arrival at the harbour, We had about 4 and a half hours to explore, so my plan was to get the steep stuff over with first and then explore the village on the way back. So along with some others from the trip, I headed up the military's purpose built road. As you can see from the photos, the weather was perfect by this stage, and getting quite hot in the sun. A nice breeze kept us cool on the way up. The road made for quick progress and it didn't take long before we could see over the other side to Soay. At the top of the military road, a short but quite steep pull up Conachair was next. The 360° view from the 430 metre top was incredible. Even the coast of North Uist, some 40 miles away was visible through the haze. Looking back down to Village Bay and Dun On the way back we explored the village, abandonned in 1930, and the cleits, used for drying and storage. All too soon we were back on the boat, but still with an incredible trip out to Boreray and the sea stacks we'd seen from the top of Conachair. As I'm sure most people who go here say, the photos don't really do the sheer scale of the cliffs and stacks justice. An incredible place to go and a fantastic day trip. The day was rounded off nicely by the discovery that some deer were grazing just in front our self-catering cottage. My trip to St Kilda reminded me of a visit to Skellig Michael and Little Skellig in April 2010.The islands can be reached from various places on the south west coast of Ireland. We chose Portmagee and took a small fishing boat to the islands. Our transport for the trip

Much to our surprise, about half way into the 45 minute crossing, a pod of around 30 dophins came right up to the boat. An incredible way to start the trip (and take your mind off feeling seasick!) 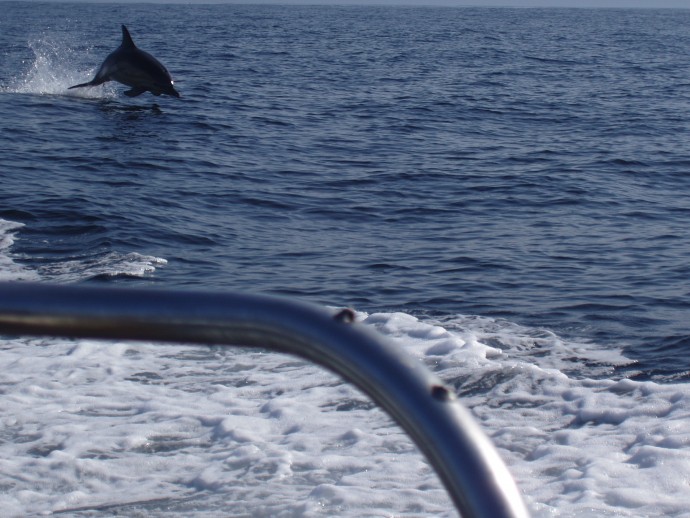 Like St Kilda, Skellig Michael is on the UNESCO World Heritage List due to the remains of a Christian monastery, founded somewhere between the 6th and 8th century and occupied until the 12th. Looking at it from the sea, it's difficult to imagine people getting onto it, never mind living there... As soon as you get off the boat, it's up the 600-odd steps. Despite being in April, on the west coast of Ireland, it was hard going in the heat. 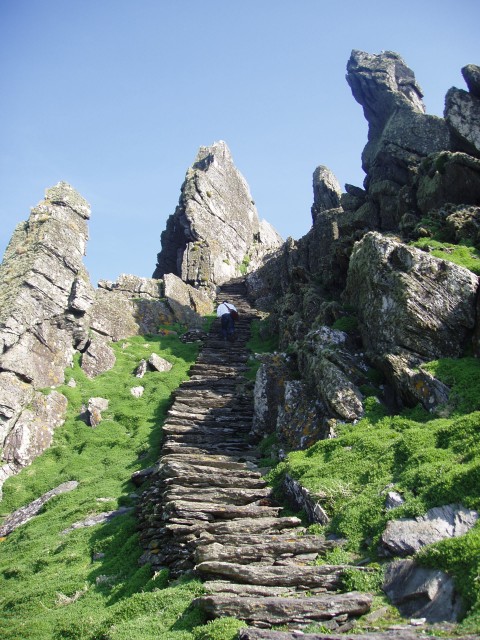 Some daunting cliffs could be seen as the steps continued to wind their way up to the top. This one is now closed off to the public as it's no longer safe to go up, Some great views and a bit of exposure on the way up. This one looking back to Little Skellig and the coast of Ireland in the distance. We reached the top in under an hour. The state of preservation of the monastery is impressive, several bee hive type structures and a graveyard perched right on the edge of the 180 metre cliffs. 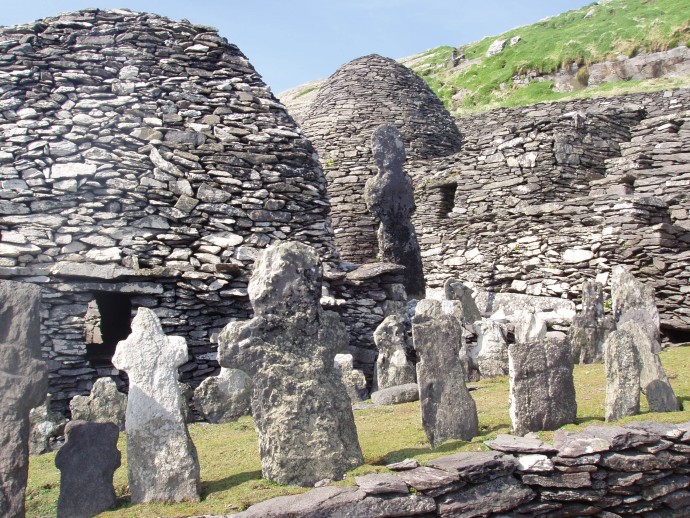 Back on the boat and a tour around Little Skellig, reaching a height of 134 metres. It's one of the largest Northern Gannet colonies in the world and equally impressive as my trip around Boreray and the sea stacks. So, two stunning places, both well worth the visit for so many reasons.
Click to mark this as a great report. Register or Login free to be able to rate and comment on reports (as well as access 1:25000 mapping).