I parked at the Ballachulish Visitor Centre at 0645 on a fine Saturday morning. There was next to no traffic on the A82 on the 2hour drive there and this was matched on the near empty car park.

Gathered my belongings and quick call of nature at the toilets (50p cash or card) next to the centre and made my way along the road. Sgorr Bhan dominates the skyline to the right with its distinct Schoolhouse Ridge discernible from the lower flanks of the ascent.

I crossed the bridge then headed south where I walked past a couple of farm gates. Further ahead, I passed one more and then immediately after I took a right and made my way more directly up the lower levels of the climb. The path diverges and converges often here. I just took the one that looked less soggy as it was boggy underfoot in the early parts of the walk. As height was gained, the wind blowing in from the north would come and go depending on if I was to the right or left of the ridgeline as you can determine from the map. Looking back to Ballachulish & Loch Leven

The sun was breaking through though as the going became rockier and the scrambling section loomed menacingly ahead. I had been looking forward to this section and deliberately held off doing Beinn a’Beithir for a good day, partly because of this. The scrambling went okay and I managed on my own. I’m far from proficient therefore lacked fluency on Schoolhouse Ridge. There were one or two moments of hesitancy - trying to get my right foot where my left foot was for example and one point my right thigh went into a spasm for overstretching - the handholds were good and I got there happily in the end. I never packed gloves though and the rock was cold and began to bite into my hands due to my dithering. It was good fun however and it was shortly after that the views behind were majestic - the Pap of Glencoe catches the eye - and when you get to the top of Sgorr Bhan the magnificent sweeping ridgeline of Sgorr Dheag opens up before you. I highly recommend on saving Beinn a’Bheithir for a clear day. It took me 20minutes to walk from the Sgorr Bhan cairn to the broken trig pillar at Sgorr Dhearg’s summit. The mind wonders how they end up in such condition. 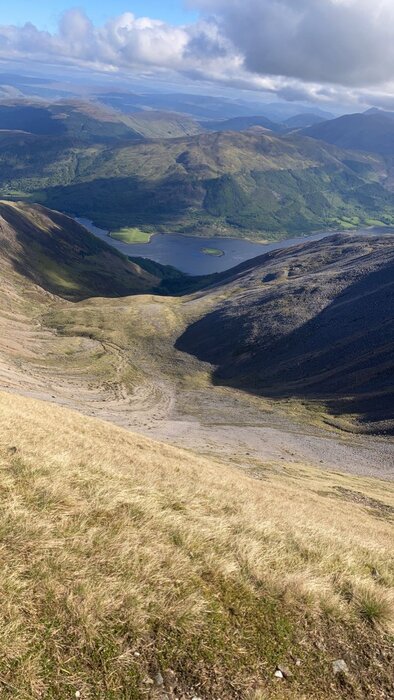 I soaked in the views for a while and admired the ridgewalk just done and the one opening up ahead to Sgorr Dhonuill. Fabby! Looking back to Sgorr Bhan I was really enjoying my morning. It was on the way down to the bealach I realised I wasn’t on my own on the upper echelons of Beinn a’Bheithir. Some sheep & lambs for company

It was on the way up to Sgorr Dhonuill I seen someone for the first time since leaving the house that morning heading down from its summit. We had a quick chat before heading off in opposite directions. Final pull up to Sgorr Dhonuill

The path up to the summit is straightforward enough, although it gets a bit exposed on the approach to the final haul up alongside the sporadic spot of soft, slidey soil which is commonplace on the hills. I took a photo at the summit and had a light lunch content with how the morning went so far. 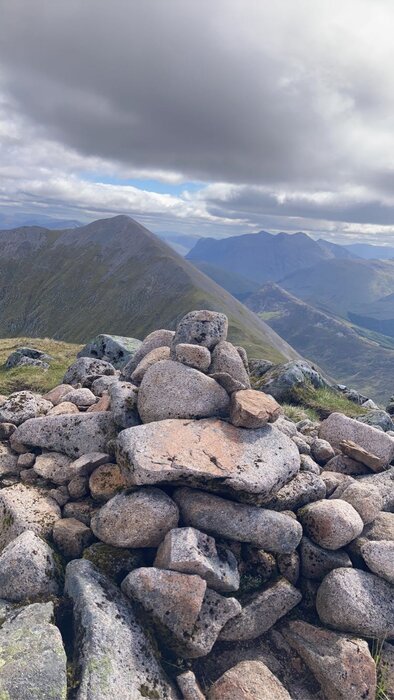 It was then time to head back down the way I came before hanging a left at the fence line and making my way to the long walk back to the car.

Following the general direction of the fenceline to begin with, there is no obvious path as such for the first section of this. I was at times walking on wet ground, cutting across the stream back & forth, holding onto the flattened fence at times for support. When the fence becomes erect I was on the right hand side of it and a short while after when it skirts the forestry the path becomes solid and reliable. By now many more people now out and making their way up onto the open hillside. 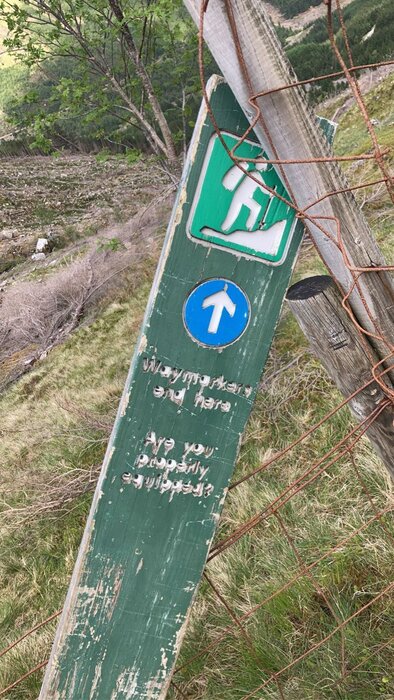 Landslide at other side of forest

Eventually I was on a forestry road for a spell before taking a right on the main road back to the co-op at Ballachulish where I stocked up on some well-earned refreshments for the long drive home.