Well, I’d kept in touch with E over the last 5-6 weeks to see if a weather window of calm weather would coincide with our respective time off work. The forecast initially looked poor for last weekend but Ben Aden by canoe looked doable when we inspected the forecast on Saturday evening.

We arrived at the parking spot which we’d also used last year for a similar assault on Sgurr an Fhuarain last June. We had expected the loch to be low given the relatively low winter and spring precipitation but when we saw it we realised that the walk carrying an 80kg Canadian canoe down to the launch site was going to be a darn sight easier than carrying it back up! 8O As it was earlier in the year than our last trip and the deep Loch Quoich was still very cold, we donned dry suits at the launch site before putting on our life preservers. E’s very safety conscious and I’m right there with him as a dooking in the middle of Loch Quoich would be a tricky business.

Here’s a picture of me in the snazzy all over rubber suit!

Dave at the launch site

It was strange to have a paddle in your hand but with a realisation that you had such a long way to go with no upper body training to assist you. When I got back I estimated that I dug the paddle into the water about 2,500 times on the trip!

Ben Aden seemed awfully far away when we first swung into the main loch but as we progressed the wind dropped and we got our first decent sighting.

From here on in it was an amazing experience as the loch narrowed and you felt like you were entering the inner sanctum, canoeing round wee islands which made it look very like a sea loch with the tide on the way out. The next picture at our haul out site gives a feel for this.

At the haul out site looking east

The view was even better looking the other way!

At the haul out site looking west

We’d decided to emulate A and FC by doing the “sporting” NE ridge. You can see about two thirds of the “S” shaped ridge route in this picture.

However, we had a bit of loch side beach walking to do in order to get to the southern dam and then to our ascent start point. The reason for this was that the loch was so low, exposing peaty mud banks, we couldn’t land anywhere near the dam but it was only about a 1km walk. En route we crossed the Allt Coire nan Gall which would be very difficult in high water.

Much though we wanted to go up Ben Aden, we wanted to see Lochan nam Breac first and wandered over there past our planned ascent route by the Allt Coire na Cruaiche. To say the scenery was stunning is an understatement.

It was tough to drag yourself away from this spot but we were a long way from anywhere and set off to do the ridge, following pretty much FC’s route.

Despite Ben Aden’s reputation for tricky route finding, we found it to be OK, although as we’re both used to the rough bounds of Knoydart and there was no mist, this may have accounted for the trouble free walk. It is steep in places though and you do have to be careful on the exposed slabs as some are slightly mossy and therefore slippy – you’re a long way from the nearest MRT here!

Here are a few pictures from the ascent.

The next wee rise initially looked a bit intimidating but was an OK if steep walk up grass between the rocks.

E contemplating the best route up

Although the cloud was coming in a bit we got a rather nice view over to Loch Hourn from just below the summit.

And here we are after having reached the summit and given each other a couple of “High Fives”. We were both chuffed to bits and were really enjoying the whole experience.

The views were spoilt by darker cloud compromising the light but it wasn’t hazy and we could see the hills of Harris and North Uist quite clearly as well the following selection.

We must have spent about 30-40 minutes up there before E took the last pic. Incidentally we reckoned that the rock on the south side of the summit from where this next pic was taken, is in fact the true summit.

The view back down over Ben Aden’s pinnacles gave a real perspective on how far we’d come and how far we had to return!

Should mention that we met Magicdin just below the summit, not that we knew it at the time! He did a post on Walkhighlands about his tough return walk of 11 hours and then Kinley identified me as one of the miscreants he had met!

As we started to bypass the first pinnacle, I suggested to E that we should try a different route on the descent, as the direct route down from NM 902 986, following the Allt Coire na Cruaiche looked quite grassy and less step than our ascent route.

We were not disappointed with the choice and the next pic shows what we christened the “Tourist Route”.

We met a lone German woman who can just be seen in the last pic. She sounded more Scottish than German and having lived in Scotland since 1997, she only had 22 Corbetts left to complete. No doubt this post will uncover the fact that she is a member!

Lower part of the “tourist route”

Of course, by the time we were further down the corrie, blue sky appeared but hey-ho that’s the lottery that is hill walking!

Looking back up to the NE ridge from the “tourist route”

Not long after taking the above pic we bumped into a couple of backpackers and found that they had kayaked in – busy place Ben Aden but it was bank holiday Sunday!

All that was left to do now was to walk by the southerly dam and follow the beach to the canoe. Half way there, guess what we found!

This could catch on!

There were also some fisherman out in a boat trying to catch trout and we were amazed that they had no life preservers and were periodically standing up in the boat. Clearly there had been no health and safety assessment done by the ghillie! 8O

Back at the haul up site we readied ourselves for another long paddle and here’s the Cap’n!

The way back was a bit harder as the wind had turned by exactly 180o since morning and we headed into a reasonable breeze and chop. However, the sky was pretty bright and I took a few pictures on the way.

It was hard to believe this wee trickle was the same fearsome Abhainn Chosaidh which has been known to scupper many walking expeditions into this area.

By now we were getting a bit weary, well I was as E still seemed full of beans! It seemed to take a long time to draw level with Leac na Fearna but when we did, we knew we were nearly back at the launch site.

Just after I took the last pic, I shouted to E to look up and I said “that’s no Golden Eagle, it’s a Sea Eagle”! What a way to end the day with E getting his first sighting of one.

If you look hard at the final picture you will see E’s car back left near the rusty shed roof. This gives you an idea of the hard work it was to lug a 15ft, 80kg Canadian canoe back up there.8O

Back at the launch site 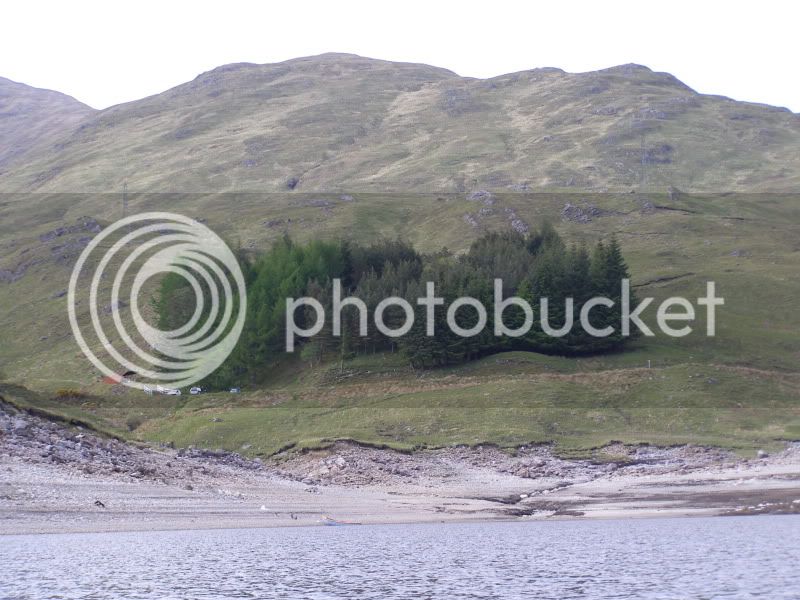 Well, both E and I had looked at the numerous ways to approach Ben Aden and they all seemed tough. Taking the canoe seemed on paper to be a good option and I’d heartily recommend it if you get the chance, as far from detracting from the wilderness experience, it most definitely enhanced the day, giving us a unique insight into the guts of west Loch Quoich, as well as nae sair feet.

A totally magic day and I really must finish by saying an enormous thanks to E for making it all possible and lending me all the necessary safety kit.

Oh and thanks also for doing what must have been 70% of the paddling, as my technique was rubbish.