If you’re not a fan of all things royal, then there were plenty of ways to avoid the Platinum Jubilee e.g. close the curtains and drink beer, learn how to clog dance, watch paint dry etc. My preference was to escape to the hills, the more remote the better and the forecast for Western Scotland duly obliged – it was time to head for Rum and climb its hills.

I left home in Cumbria on the Thursday and as a “warm-up”, climbed Stob a’ Choin – everyone says the ascent is brutally steep and by golly it certainly was! Duly “warmed-up”, I headed over to Mallaig on Friday and caught the afternoon Calmac ferry to Rum. After a serenely smooth crossing under cloudless skies, I headed for the campsite, pitched my tent and went for a leg-stretch before heading to Kim’s Kitchen at the community hall for a tasty fish and chip supper.

At 5am the next morning I tucked into a large bowl of cereal, washed down by a mug of tea, packed my day-pack with food and water and set off at 6am, with a mixture of eager anticipation and anxiety about the day’s forthcoming physical challenges. There was a welcome chill in the air as I headed past the castle and onto the track along the side of the Allt Slugan a’ Choilich. The track went easily up past a water catchment dam and then the remains of an old dam and on to the lip of Coire Dubh where I veered left, still on a path of sorts towards the N ridge of Hallival. 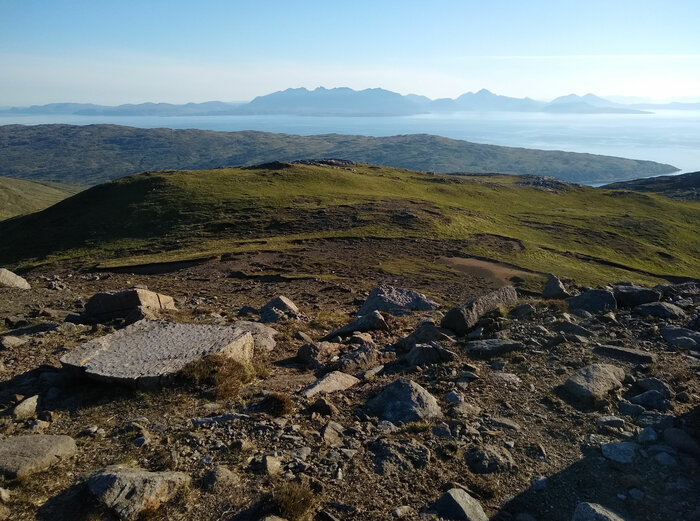 View across to Skye from saddle below N ridge of Hallival

The dramatic peak of Askival suddenly came into view as I climbed up towards the N ridge: 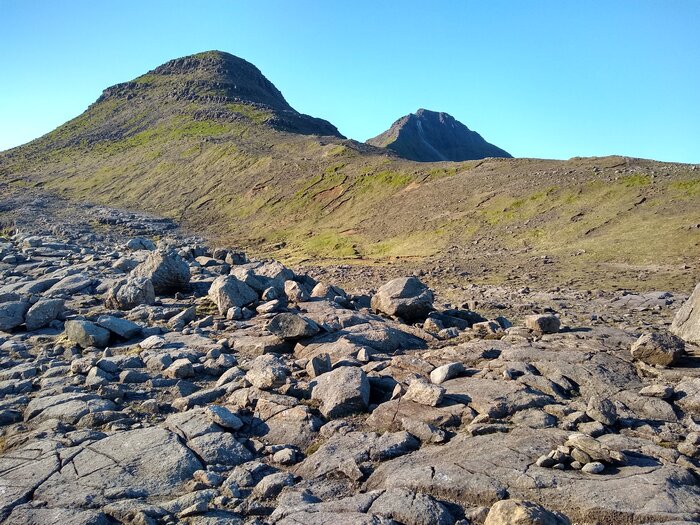 A bit higher up, Ainshval and Trallaval also came into view, so in the space of about 20 minutes, all the four hills I had intended to climb were now in front of me. The climb up to the large cairn at the summit of Hallival was mostly straightforward on grass with a few crags to climb around, although a few mildly tricky rock-steps added to the fun. It had taken a few minutes shy of 2 hours and I sat down to enjoy the views across to the islands to the east as well as my route onward. 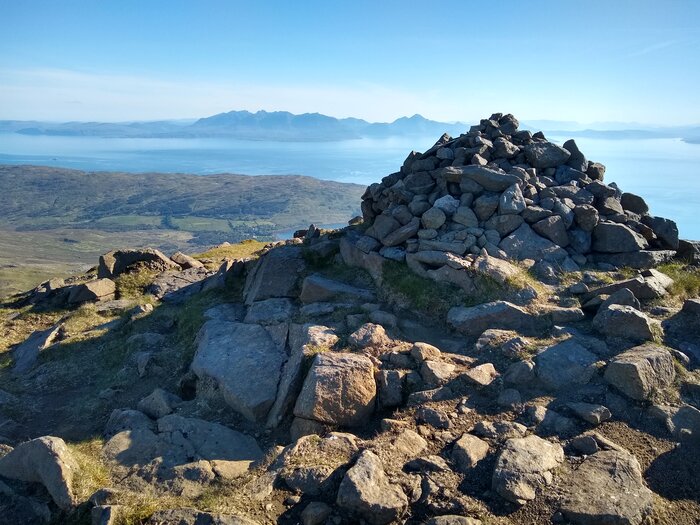 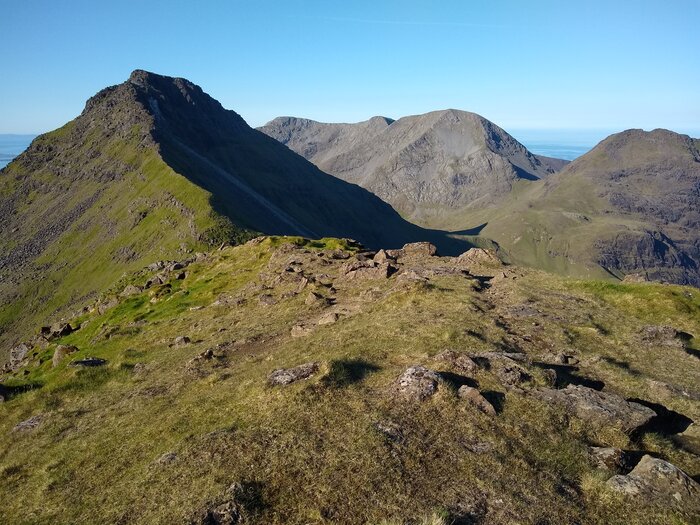 It was time now to head for Askival, which from Hallival looked impossibly steep and precipitous, however, before that I had to descend to the saddle between the two peaks – this was by no means easy with some steep gravelly sections and clambering over or around large boulders. From the saddle, I made for the narrow grassy ridge which led up to the daunting Askival Pinnacle. 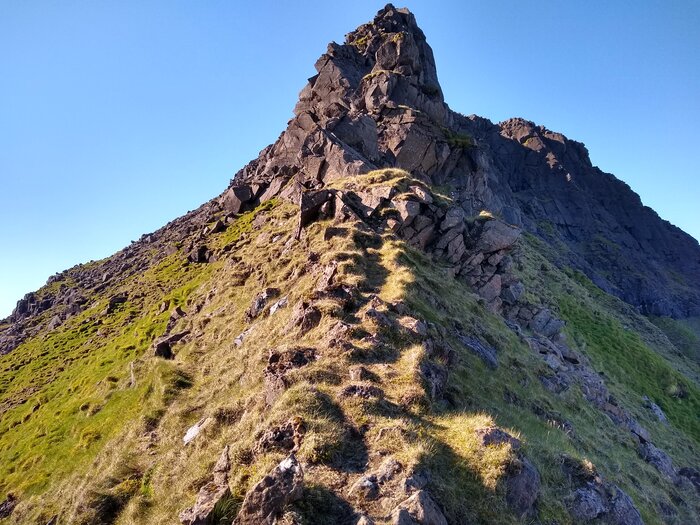 The Askival Pinnacle seemingly blocking access to the ridge

I took the standard advice of following a small path below the crags to the left – this was easy to follow and contoured up towards the E ridge where there were plenty of choices for climbing up through the crags to the top. I probably didn’t take the easiest line as I ended up tackling some quite strenuous moves up rock-steps and gaps between boulders. With great relief I popped out at the top and was amazed to see someone posing on top of the summit trig point! 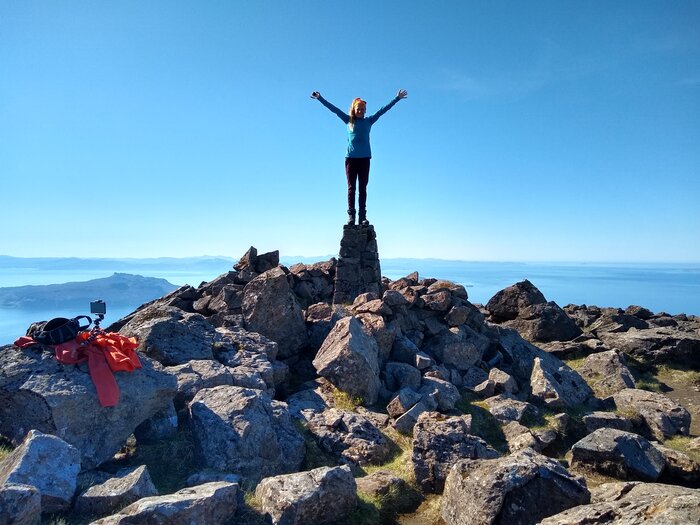 I chatted with the young lady as she took remote-controlled selfies of herself in various positions! It was now 9am and I had been on the go for 3 hours and was ready for my second breakfast. 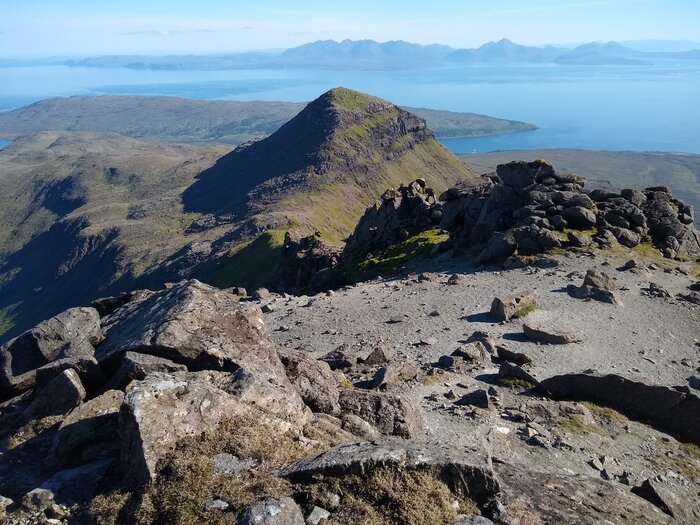 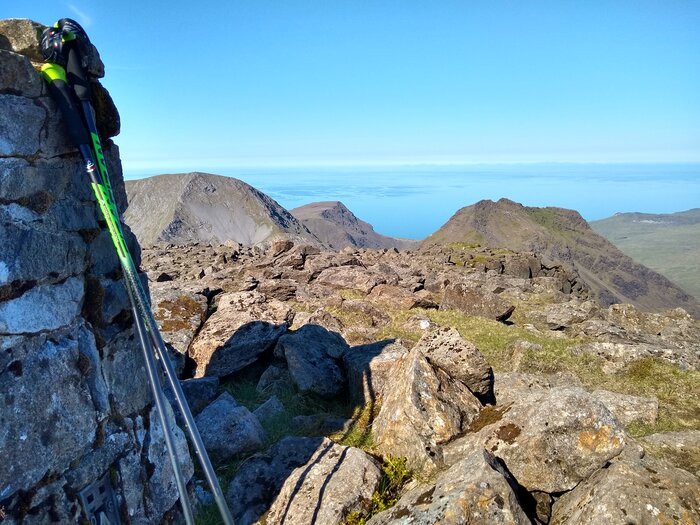 View across to the NW of Rum from Askival

The next task was the descent towards the Bealach an Oir - the advice is to keep to the left of the west ridge to avoid difficulties and I managed to follow traces of paths well to the left - it was slow going but not particularly difficult as I zigzagged down and aimed for the grassy safety of the bealach. 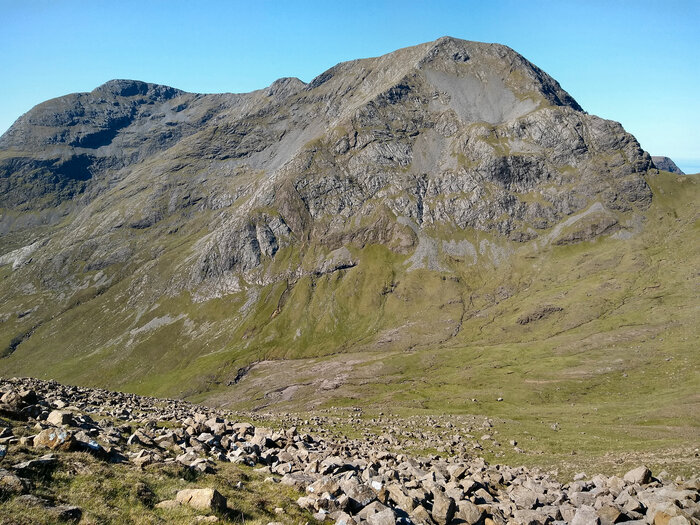 I now had a decision to make – either head up to Trallaval, or to go directly to Ainshval and think about climbing Trallaval after descending Ainshval. My priority for the day was to climb the two Corbetts, so I chose the latter. So, well before reaching the bealach I contoured around below it and gradually up towards the Bealach an Fhuarain. From there the next challenge is to avoid the large buttress at the foot of Ainshval, and a path wends its way to the right of this to a boulderfield. 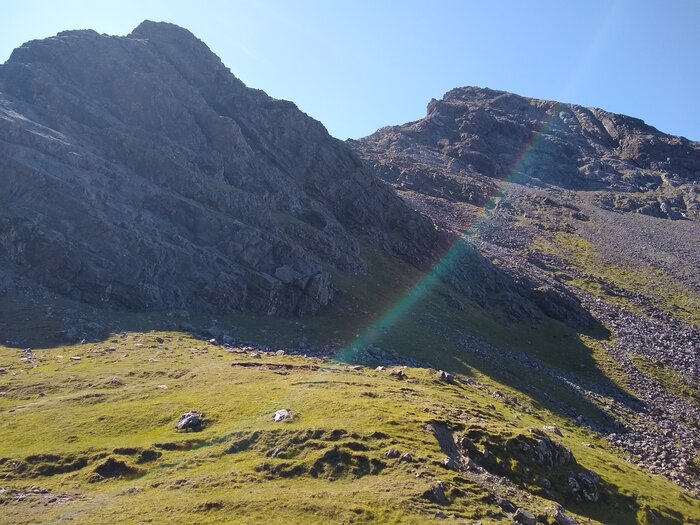 The ascent of the boulderfield was slow-going with occasional grassy interludes and led up to the N ridge above the buttress. After stopping to chat to a chap who was about to climb his final Graham (Trallaval), I began the ascent of Ainshval – this proved fairly easy as a path has developed on the left side of the ridge, crossing a few short sections of boulder high up. 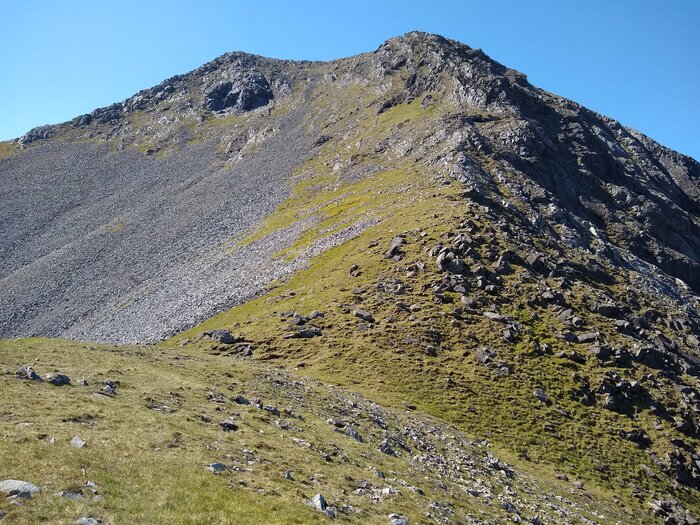 At midday I reached the top and enjoyed a long break after the strenuous morning. 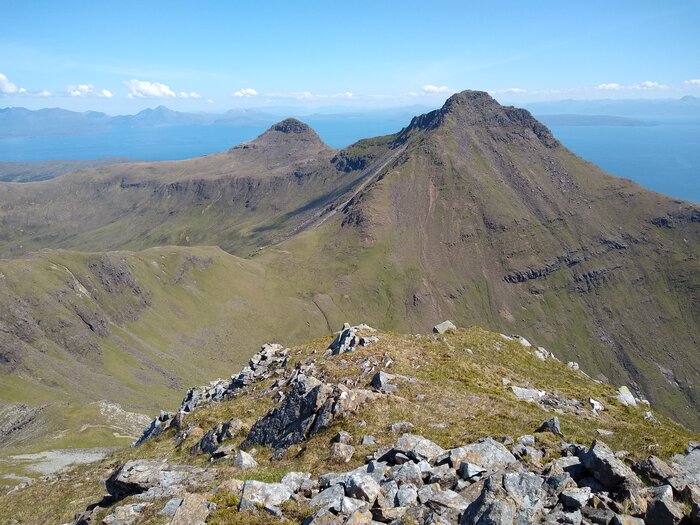 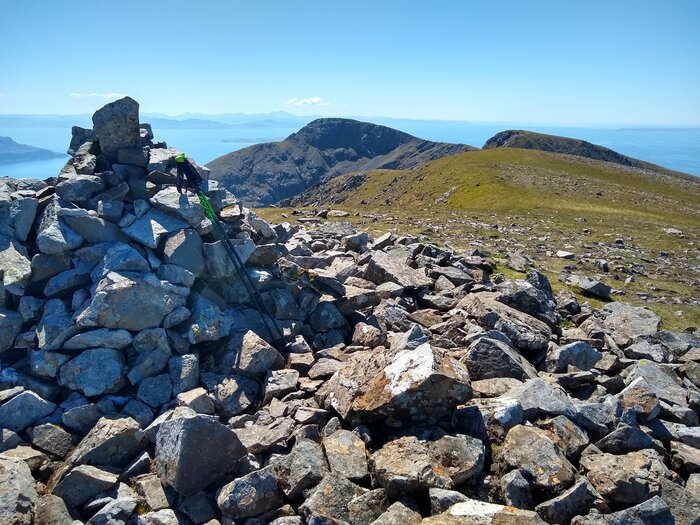 The view looking south to Sgurr nan Gillean looked very enticing and I knew there wasn’t much height loss from where I was – however I still wanted to climb Trallaval. Decision made – I would do an out-and-back to it and then climb Trallaval before heading back via Atlantic Corrie. I revelled in the delights of a grassy path down to a saddle and then climbed easily up to the north top of Sgurr nan Gillean, followed by a curving ridge down and up to the higher south top. I was quite glad I’d decided not to do the full traverse as the route down to Dibidil bothy looked very steep. 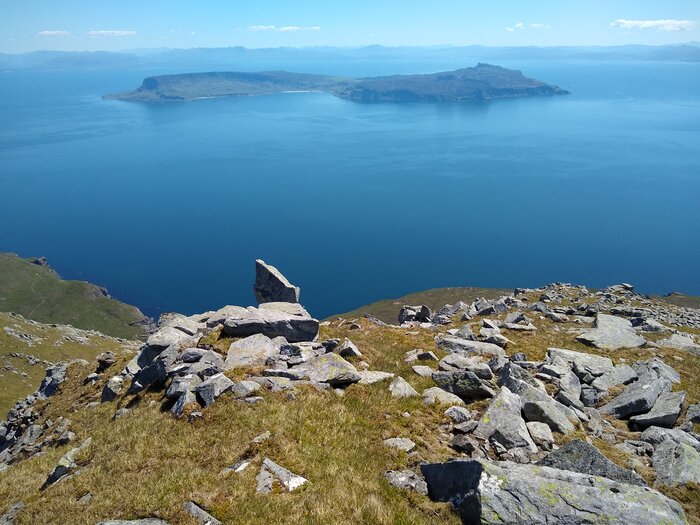 Looking out SE from south summit of Sgurr nan Gillean

I then headed back over Ainshval and back down to the Bealach an Fhuarain. The route up to the east summit of Trallaval was steep, with a path lower down wending its way between crags and then choices of route higher up. I ended up veering around to the east side and scrambled up through blocks and up grassy rakes until topping out. The higher west top now beckoned. 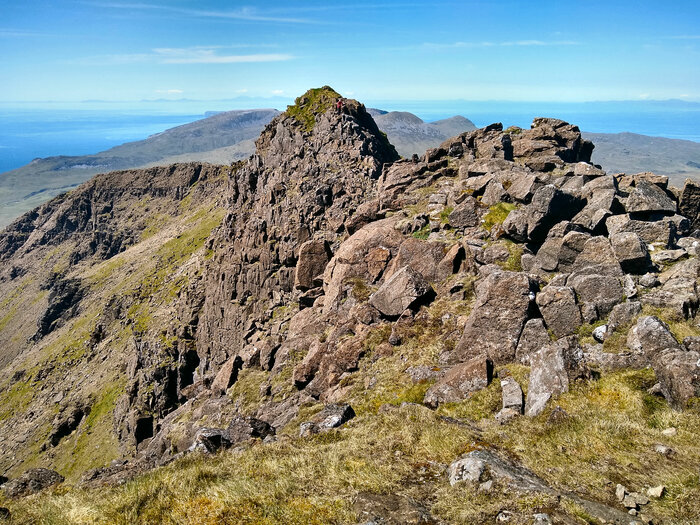 The higher west top of Trallaval from the east top

I could imagine the traverse of the two summits being quite challenging in wind and rain but today the conditions were perfect, so I set off clambering over and around boulders, side-stepped one short section and within minutes was standing on the grassy west summit. 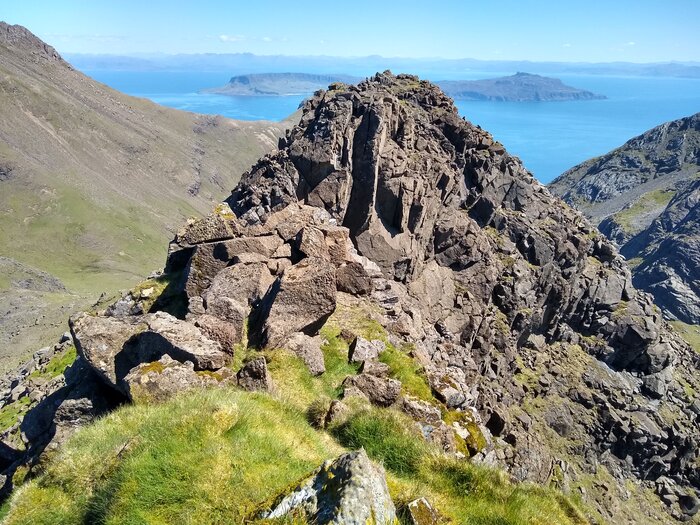 It was now 3pm - I'd been on the go for 9 hours, but it was now mostly downhill! I made my way back to the east top, then looked for a way down to the Bealach an Oir. After a few tricky downward moves I was onto grassy slopes and soon striding down to the bealach. My aim was to traverse around Atlantic Corrie all the way to Bealach Bairc-mheall without losing too much height. This proved to be a very slow and tedious process, necessitating the crossing of numerous bouldery sections, including the dramatic one formed recently by a huge rockfall from Askival (which if anyone wants to know, is perfectly safe to cross in my opinion). It took two tedious hours to complete the traverse and it was with huge relief I crossed the bealach and headed back down to the incoming path and eventually back to the start just after 6pm.

The edge was slightly taken off the day when I got back at the tent to discover an animal had run off with all my food, which had been hidden in a bag under the flysheet to keep away from the hot sun - all I had left was a bottle of beer and a can of fish! I hurried over to the shop by the community hall and luckily it was still open so I didn’t go hungry!

It had been an epic day in glorious conditions - warm but with a light breeze on the tops and great visibility. It was certainly one of the best I’ve had in Scotland – just over a week later I’m still buzzing from the experience. I can thoroughly recommend a visit to Rum – the walking is superb with a few difficulties high up but take your time and enjoy the challenge!


Rum traverse route.gpx Open full screen  NB: Walkhighlands is not responsible for the accuracy of gpx files in users posts
Click to mark this as a great report. Register or Login free to be able to rate and comment on reports (as well as access 1:25000 mapping).


A superb day on the Paps of Jura

Three in a row in Glen Dessary

Battling the wind on Carn a' Chuillin