Off the party train to Corrour - 2 munros surprisingly nice!

Good weather forecast on MWIS with possibilities around Ben Alder area but no takers, til - ping - 10pm the night before a post football BBQ and with no plans firmly in place - a possible bite! That can't be allowed to go to waste after a couple of years of nothing much, can it? So, one poor night's sleep later, it’s up at 6.30 and trying to formulate a plan involving bikes on the train to Corrour. Well, that didn't get too far before departure at 8 with 2 willing women plus 2 bikes and no reservations made - its compulsory we hear on the W Highland Line. But we set off anyway, with 2 options - either we do the 2 westerlies of the 4 munros above Corrour bothy - a nice cycle in along the N shore of L Ossian - or - if "no possib-lah" on the bike front with the train company - we do Sgor Gaibhre and Carn Dearg - except I’d already decided these would make a good walk in from Rannoch just to mix things up a bit. We called Scotrail as we drove up north, to hear there was no availability for bikes, so that settled it - we'd be doing SG and CD.
And then, what about the weather? I've turned into a complete whoos who doesn't want to go up things unless there's a cloud free cordon around them. And as we headed north it wasn't looking hopefull. Low hanging clouds abounding! Pah! We arrived in good time at Bridge of Orchy though. Bridge of Orchy from Fife? Why there you ask....well the thinking here was that the guide books all suggest you need about 7 or 8 hours to do the round of these 2 mountains, but you've actually only got 7 hours to play with between trains. Now my companion - J - doesn't think she walks very fast, so I wasn't sure we would make it round in time, but didn't want to worry her! Luckily for us, the train to Fort William runs about 3 hours later, and I have rellies in the vicinity who could be bribed into giving us a run back to Bridge of Orchy if necessary!! Whereas to ask them to run us all the way back further down the line is perhaps pushing the family loyalties too far at nearly midnight on a Saturday!!
Well, the train pulled in and we got on to find it really busy and almost everyone in walking gear with rucksacks, poles, dogs and goodness knows what [all masked up of course]. It was quite the party atmosphere! Not massively chuffed to find there was in fact only one other bike on board, and there would have been more than enough room for us. But we'll do that trip another time....
It felt like we were all joining in on some big adventure, when a big crowd poured off at Corrour with us - there must have been 30 or more outdoor enthusiasts of one sort or another. The stragglers on the platform after the mass exodus!

But almost as soon as we emerged from the station, almost all of them had melted into the landscape! Most seemed to be heading the way we were going, with us - fiddling about taking photos - as the back markers. 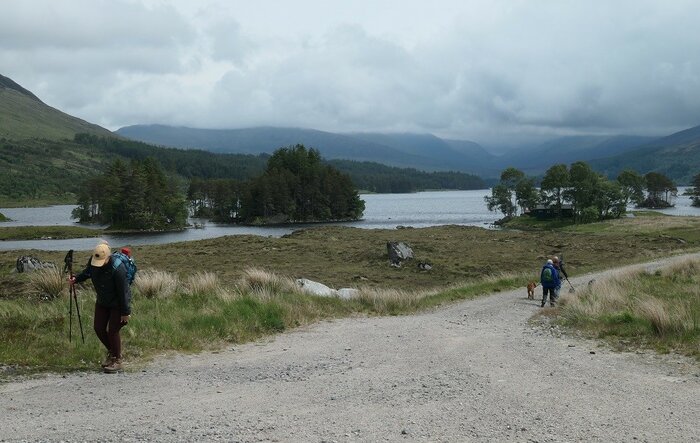 Can there be a more perfect setting for a youth hostel?

One guy we’d spoken to on the train - who’d been worrying he was too slow to get round – appeared to have swallowed rocket fuel and was already just speck in the distance! Had I seriously misjudged this undertaking? Probably - as I realised I’d been so busy admiring the views of Loch Ossian that we’d missed the first turning off and were heading along the shore, instead of higher ground where everyone else had gone! Concentrate Woman or you certainly won’t be chugging south at half past 6! One good thing though – the clouds had been rising and were now clear of some summits, including our own.
A short uphill traverse put us on the right track, and we could still see others ahead in the distance! I was reasonably confident that our pace should get us round in time if we could keep it up, so we stopped to fuel up at Peter’s Rock before taking to the open hillside for what turned out to be a real slog over springy heather and bog land as far as the ridge. 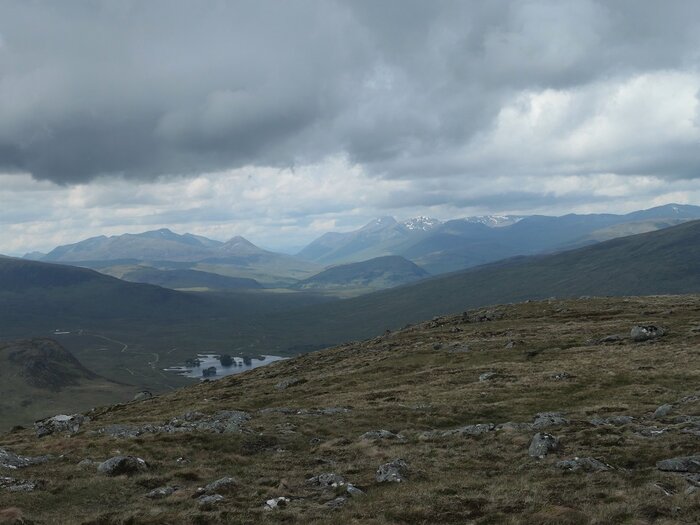 A nice broad rocky ridge curving upwards with glimpses to the summit of our first munro, Carn Dearg. Always a bonus to have an eye on the target! And what a worthy destination – a massive well-constructed drystone cairn – very nice! Haven’t seen many of those on my recent munros. Distant views of Ben Nevis from an unusual angle where you don’t see the distinctive bulk of the mountain but its height still gives it away - intriguing! Not a good place to stop though, as the wind had got up a bit, and the darkening sky threatened rain. So we turned our attentions to peak number 2 – Sgor Gaibhre. A pretty straight line to the top of Sgor Gaibhre

We could see it clearly across the broad peaty bealach of Mam Ban. A bit of a drop down, past what would be boggy bits in wetter weather, then a long but strangely satisfying slog – head down and rhythmic use of the walking poles - up through pale orangey grass and some big boulders to the small summit plateau. From a distance I hadn't been sure if these intermittent boulders were people... on closer inspection they must have been sumo wrestlers!

On the way, the view to the south revealed the route I’d previously considered for Carn Dearg and Sgor Gaibhre starting just east of Rannoch Station. It would have involved following the rim of a huge valley of peat hags – under the glowering skies it would have made pretty desolate viewing. A couple of miles further that way too, so I felt glad I had abandoned that idea – ours was a much better choice of route for these 2 munros - as long as we could make the train!!

looking south to the 2 ridges either side of the peaty basin which form the route from Rannoch Station - not looking too appealing! Summit cairn nr 2 of the day. Not so impressive in itself, but a great setting!

The small cairn of Sgor Gaibhre is perched close to a steep drop to another boggy valley, but this one has lots of interest – a small lochan glimmering just below – Lochan a Bhealaich - and a more distant view to Loch Ericht - we could make out the tiny spot which was Ben Alder bothy just above the shore - plus the western side of Ben Alder revealed at last! It definitely looks way more impressive from the other side, but this view does lay out the extent of the massive plateau. The dark sky and odd spot of rain adding to the drama. Alder Bay on Loch Ericht with Ben Alder bothy hiding at its edge, plus the backside of Ben Alder's massive plateau. A quick bite to eat sitting admiring these views, then we headed off back down the path northwards. Sgor Gaibhre looking far more impressive on the descent than the ascent!

I had been intrigued to note that the ‘twin peak’ to Sgor Gabhre – Sgor Choinnich – only 26 metres lower just to the north had been a munro but demoted a while back. If we had had more time I would have gone over its top, but instead we took a line below the summit heading for Meall Nathrach Mor. This allowed us to bear west - dropping down to the gap in the forestry that tightly hugs Loch Ossian - where a track runs past outbuildings to meet the route back along the shore. The vibrant colours of the bog mosses are beautiful

There's no ideal route back to the water's edge - no path our way, but others who headed north off Meall Nathrach Mor aiming for a gate east of the end of the loch said it was very boggy that way.... Then that familiar long tramp back along a stony track with slightly tender feet for several miles – 5 at least! But what views, and fortunately with plenty of time [about 30 minutes] even if we were slowing down with every mile by this point! At last the railway station buildings came into sight, and how welcome and tasty the food and drink is at the Station House! The guy who’d gone off like a rocket was tucking into another pint - he’d been back an hour at least ahead of us and we all agreed the guides are a bit on the cautious side with their estimates! We had just the right amount of time before the train this time, but I’m definitely coming back to enjoy the hospitality properly as well as the wonderful landscapes at my leisure!


Lancet Edge?...Worth having a change of plan

No turning back – looping the loop of A’ Bhuidheanach Bheag

A paddle and a donder for the best way to Ben Alder!