our_route.gpx Open full screen  NB: Walkhighlands is not responsible for the accuracy of gpx files in users posts
This walk was one of those clear the head days after a get together with some friends the evening before so it was undertaken on a fairly wet day. It was also a Birkett bagging outing with 5 new summits on route. Parked at Dob Gill car park, ignore web sites that say the carpark is free, it actually costs £4.50 for up to four hours and £6.50 for 24 hours. Nowhere else to park as United Utilities has the area sewn up.
Leave the carpark and walk out on to the road and turn left. Look out for a tile over the fence on the left as you clear the forest and follow the track up the hillside. 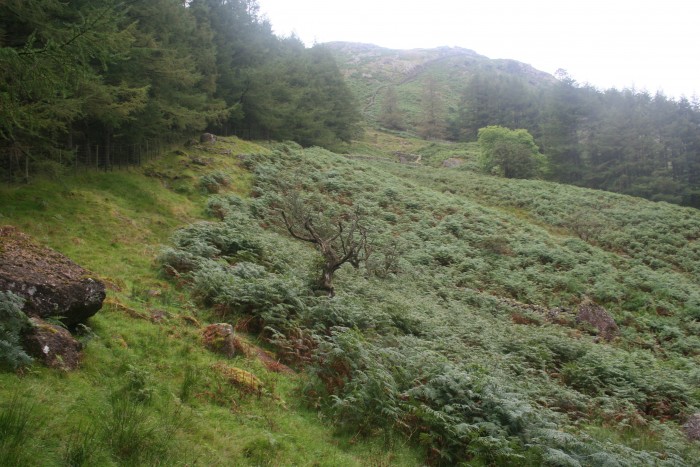 View of the start of the route

Some indecision as I crossed over the road coming out of the forest but eventually climbed the gate that was tied up. Worked my way up and on to Brown Rigg much to the obvious annoyance of several locals. Who since the foot and mouthseem to have little fear of walkers. The rain had eased off although you could still swathes of cloud coming over Dunmail Raise. Clouds coming in from Dumail Raise

There is a general lack of paths around here but it seems that there is a whole new breed of Birkett paths, very faint and leading from obscure summit to obscure summit. Made my way across to the base of the next summit, Birkett calls it Blea Tarn Fell but on the OS it is unnamed, nearest identifiable named feature is Bell Crags. Follow an easily identifiable broad rake up from the base. View up the rake up to Bell Crags From here route finding is straightforward just follow the fence to the highest point then if you are bagging Birketts you have to make the detour downhill to High Saddle and Low Saddle and then all the way back up to where you started. 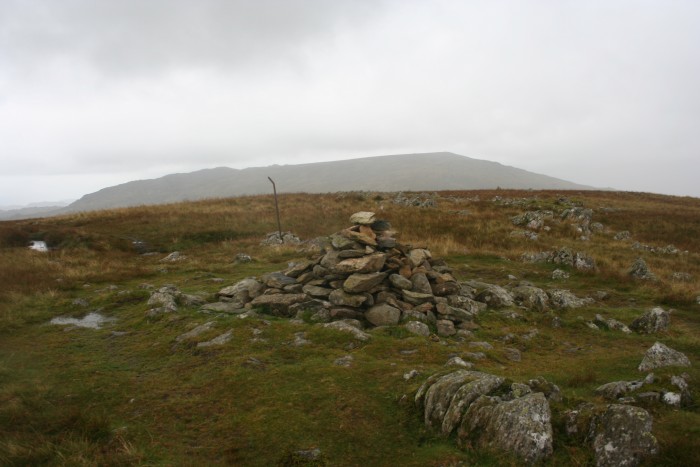 From here on there is no clear route or path to follow. I headed southeast to the edge of Wythburn and followed the ridge over looking the valley. The ridge above Wythburn and the route back to Dob Gill

The rain was back in by now and the lack of any clear path made the going difficult. This route is one of those where you have to choose between climbing small peaks or walking around. Take care if going over them because many have craggy faces on the eastern sides and often lead to some careful descents. This also means that I nearly missed my final Birkett, which Birkett calls Wythburn Fell as it is pretty well indistinguishable from the other summits.
The feature marked as a beacon on the OS maps is somewhat perplexing, is it a practice drystone wall or the shortest drystone wall in the lakes. Shortest drystone wall in the Lakes?

The path back to Harrop Tarn is now clear so make your way across some marshy ground to a solid path then take a left through a gate to follow a route down past the forest. There is a ladder stile which I avoided that only takes you into the forest with lots of ducking under trees, By the time I reached Harrop Tarn the rain was and truely back in and so the terrific view from the tarn outlet was somewhat spoilt. One word of caution, on the OS map there is a clear dotted green footpath line indicated down the south side of Dob Gill with a smaller dotted black line to the north. I had used this footpath on a previous descent so chose the souther footpath clearly marked with a blue painted trail marker. This was a definite mistake and I have to say that this is possibly one of the most dangerous footpaths I have descended in the lake district. It is more like a boulder strewn beck bed with prickly juniper bushes either side. In the rain with wet slippy boulders it was quite desperate. I have shown the north footpath on the route map. The head was definitely cleared by the time I got back to the car.


.
Click to mark this as a great report. Register or Login free to be able to rate and comment on reports (as well as access 1:25000 mapping).


The Dodds and the Deepdale Horsehoe