With the great forecast for the weekend I thought I'd better try to get out with my tent and do a bit of wild camping. It took ages to decide on where to go but I finally decided on Beinn an Eoin and Baosbheinn camping on the summit of Baosbheinn.

Left Inverness at 8 on the Sunday morning for the drive over to Loch Maree. I was parked at the red(green) hut and ready to go for 9:30. It was quite chilly but a really stunning morning - no cloud at all!

Made good progress up the track through the newly planted Scots Pine wood - it'll look really nice in a few years. A bit further along the track I caught my first view of Baosbheinn - it looked very impressive! The track winds all over the place going up and down as well as following the river for a bit. I reached the end of the new plantation and followed the track onto a flatter bit just before the loch. There were brilliant views from here. I soon headed towards the NW face of the Beinn an Eoin ridge and found my way up onto the ridge proper. I found a nice cairn - don't know what it was for but it was a nice one. Continued walking along the ridge and after a steep ascent you reach the summit to incredible views. Baosbheinn from Beinn an Eoin

Had a quick lunch on the summit then headed a bit further along the ridge with some good scrambling opportunities then headed straight down the very steep slope. Had to weave in and out of crags so I don't think I descended at the right point.
Finally reached the private bothy where it was warm and still and had a seat on the bench.

After a nice rest headed west through the small lochans and started the climb up to the ridge of Baosbheinn. There were fantastic views back to the Torridon munros. I continued along the ridge going up and down steeply twice - I was beginning to tire carrying my pack so couldn't wait to get to the summit then find somewhere to camp.
I reached the summit at about 4:30 and discovered to my delight that it would be perfect for a summit camp. I put my tent up quickly then set out on a mission of taking photos of everything. I cooked a quick meal then took a few more photos of the sun setting over Skye's Trotternish Ridge. Climbed into my tent at about 8 and tried and failed to get to sleep. It was getting colder and colder and I got a pretty bad sleep waking up on numerous occasions.

After waking up for what seemed like the 20th time the sky was getting lighter and I climbed out the tent into the freezing cold wind. There was a nice layer of ice on the tent which showed how cold it was. The sun wasn't far from coming up. The sun came over the horizon casting a beautiful light over everything. 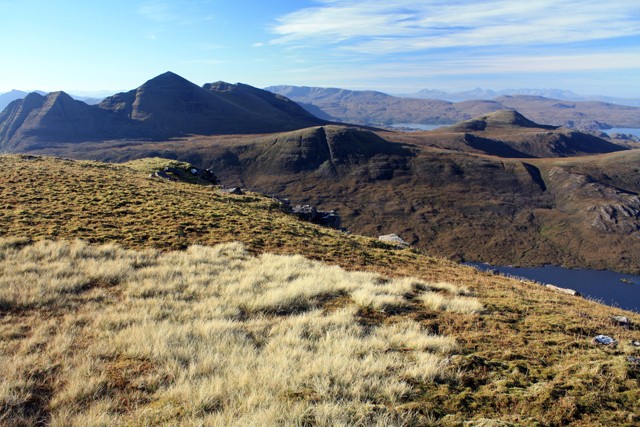 I had a good breakfast then packed up everything and left the summit by 9:30. I headed down a ridge to the north-east then dropped down into An Reidh Choire following a stream down to to the river. I felt surprisingly fresh marching back along the track and it past in no time at all. Walking through the plantation was nice again and I got a good view of Slioch. Continued on my way and reached the car park at 12:30. It was once agin nice and warm so I had a nice seat before leaving.

This has been my favourite walk so far with amazing views and it was pretty quiet. It was maybe just a bit cold for sleeping!
Click to mark this as a great report. Register or Login free to be able to rate and comment on reports (as well as access 1:25000 mapping).