About eight years ago I walked from Dalwhinnie to Culra, only to discover as I was about to head up Carn Dearg that one of the shoulder straps on my rucksack was hanging by a couple of threads. No choice other than to humpf myself back to the car, essentially a 18 mile walk with no end result other than needing a new rucksack and being mighty impressed with the scenery around the bothy.

This time around, armed with my bike and thoroughly checked straps, it was up and away from Dalwhinnie with the aim of a wild camp and getting in all six of the Munros.

A beautiful morning with wisps of clouds on the Loch and the remains of an inversion around Ben Alder lodge. 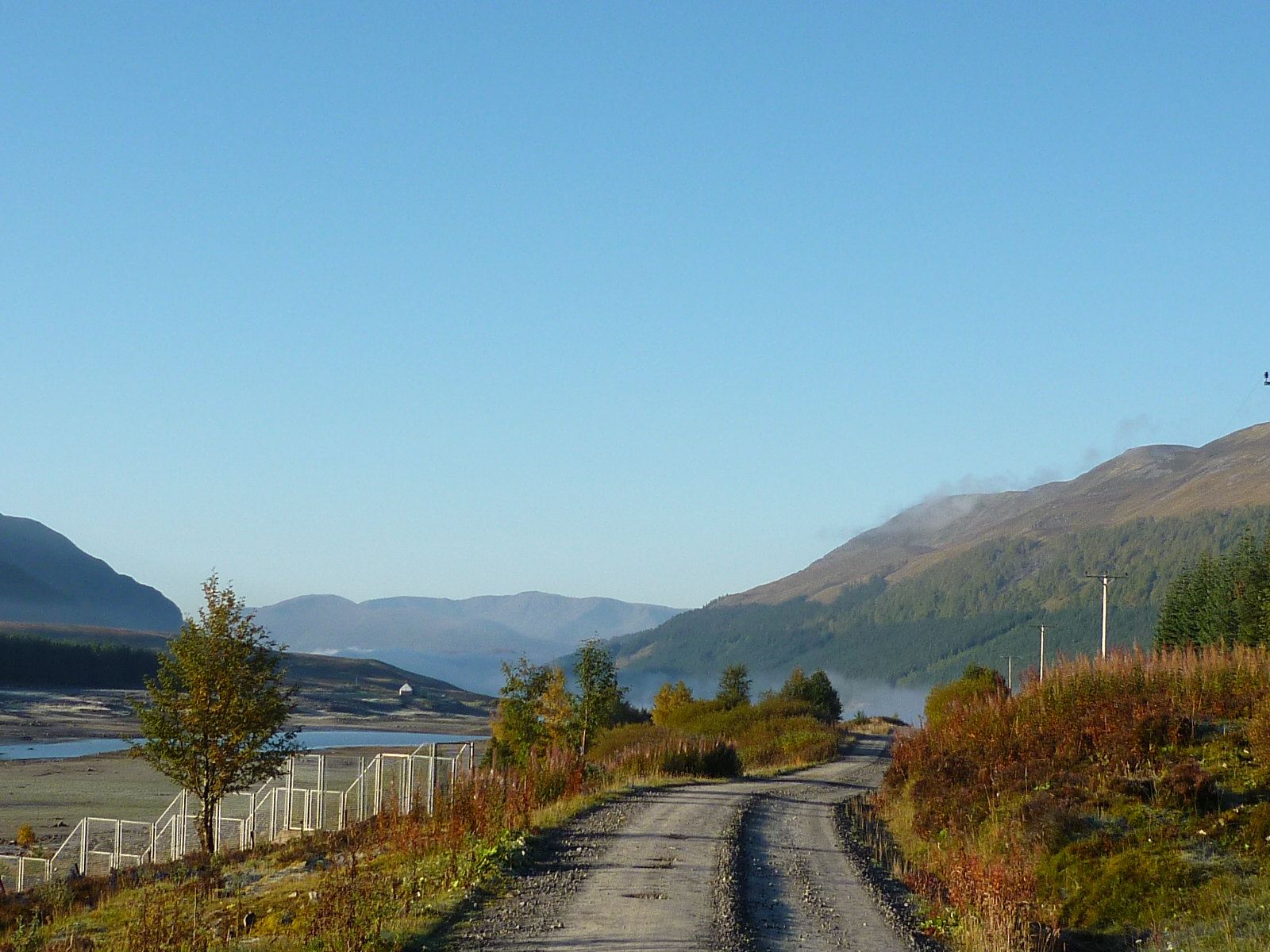 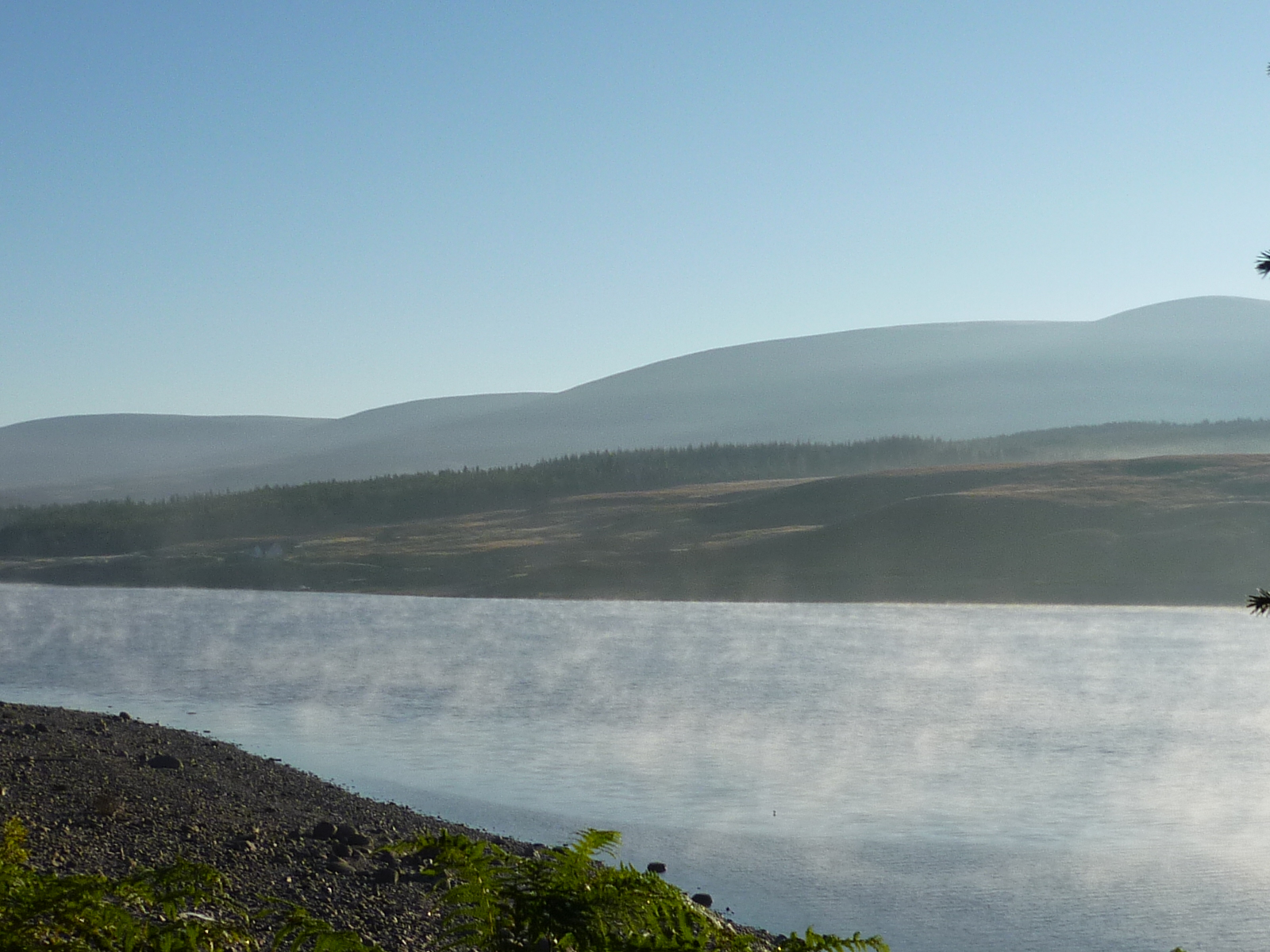 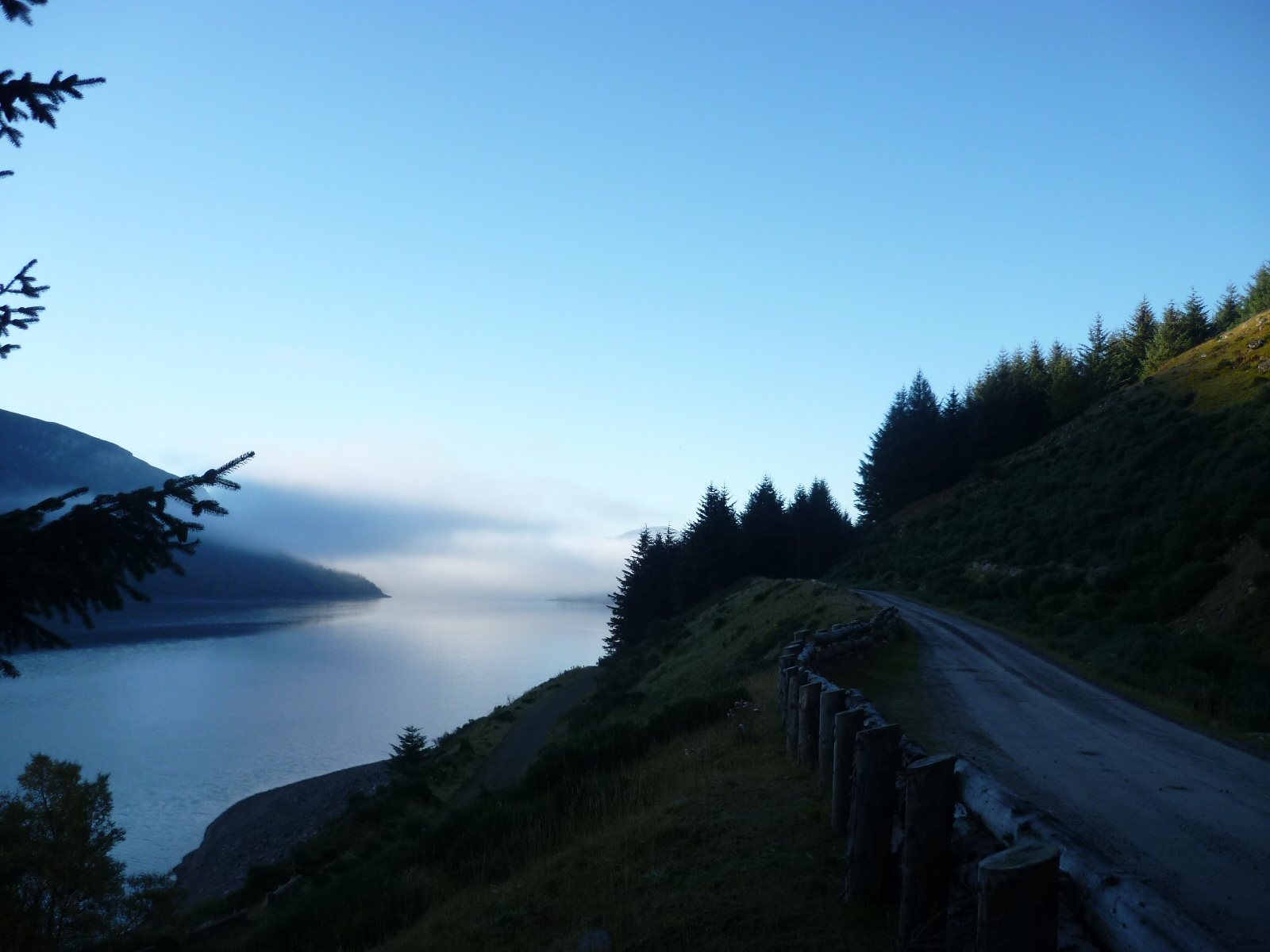 Not the fastest cyclist, I reached the cut off path to Culra in about 90 mins, dumping the bike while admiring the cracking view over to Bheoil, Alder and the Lancet Edge, and the bluest sky you could hope for. 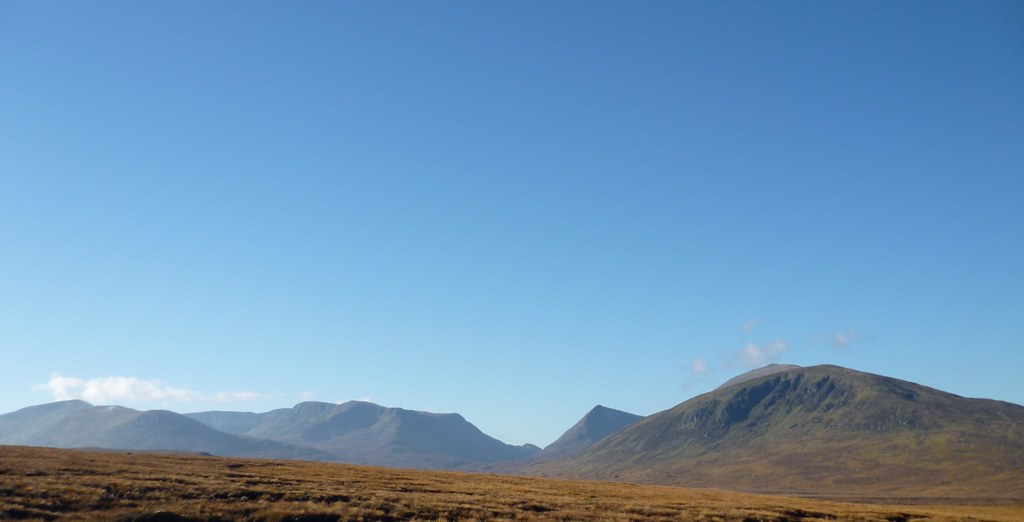 It’s a couple miles from the cut off to the bothy. I was heading to Bheoil first and stopped for a brew at the footbridge, with these magnificent mountains constantly pulling the eyes upwards. 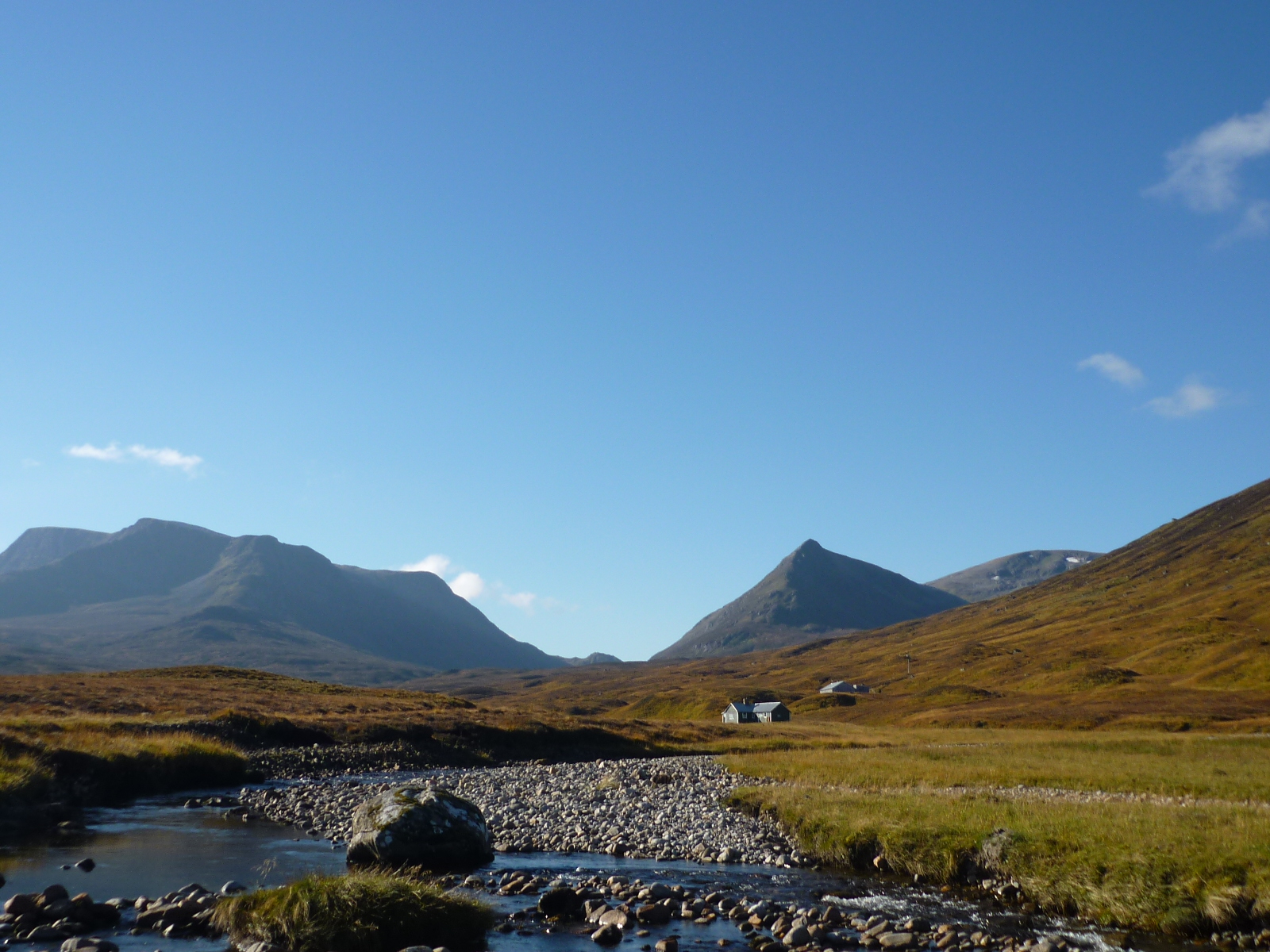 The Lancet Edge looked excellent from the lowers slopes of Bheoil. 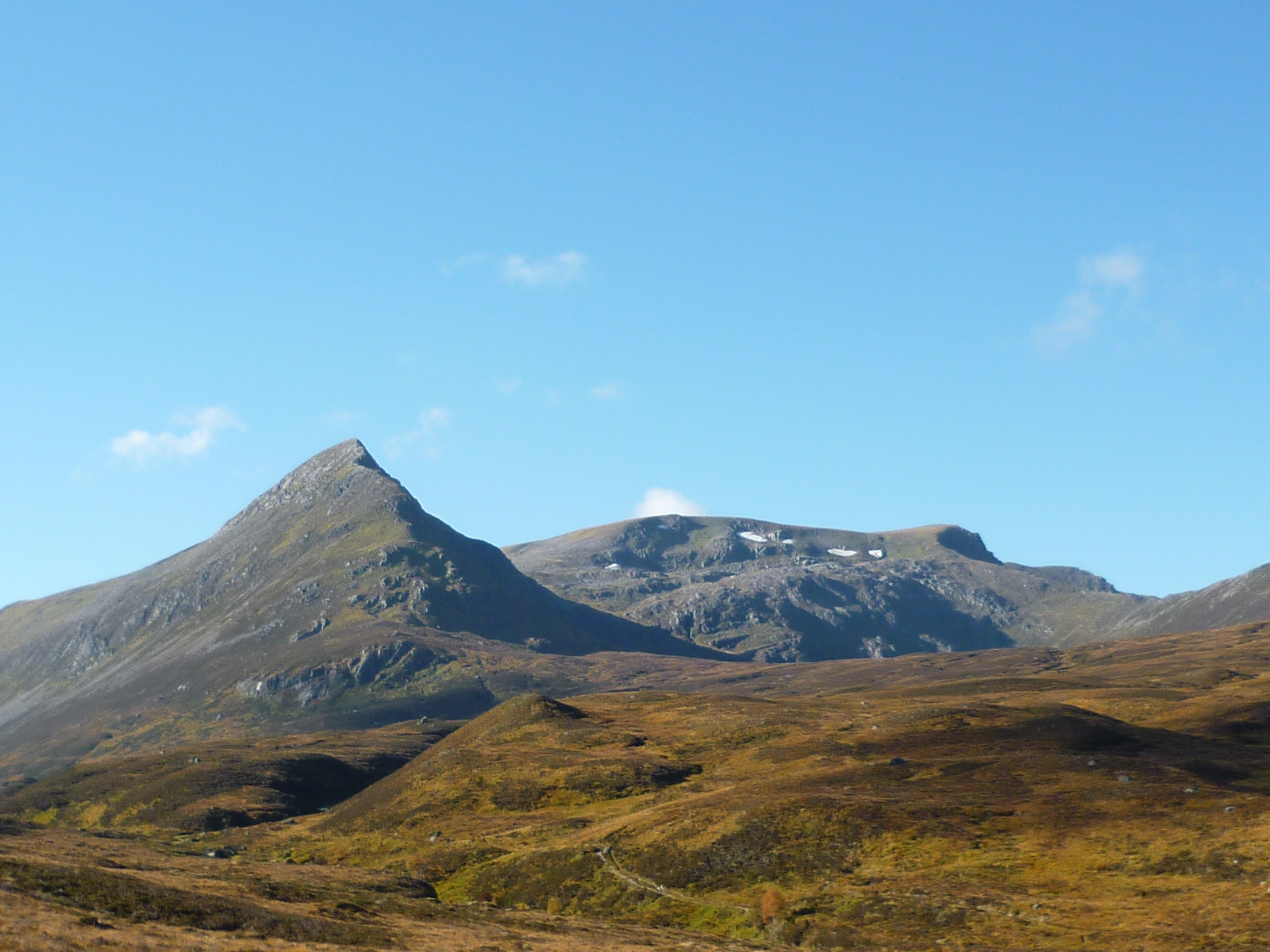 There is a good path that leads you a fair way up the side of northern spur of Bheoil, turning off to follow a faint track as the path levels out towards Ben Alder. It doesn’t take long to reach the broad, easy going ridge to the summit of Beinn Bheoil. I passed a group of DoE’ers completing their gold expedition on the final steep pull to the summit – looking happy and ridiculously fit and healthy, certainly compared to me puffing and blowing. 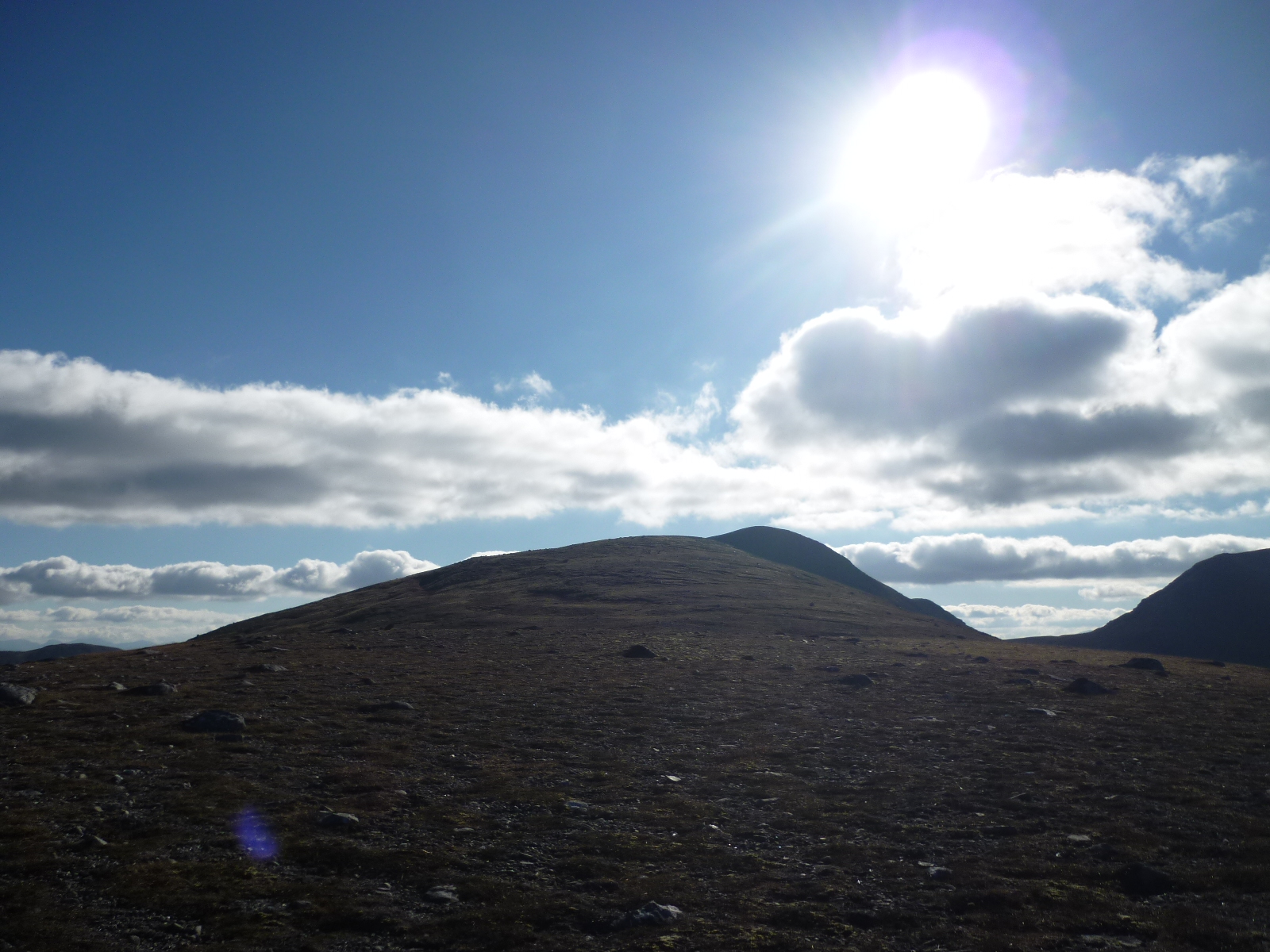 The top of Bheoil gives good views all round
Short and Long Leachas and Lancet Edge, Carn Dearg and Beinn a’Chlachair in the middle. 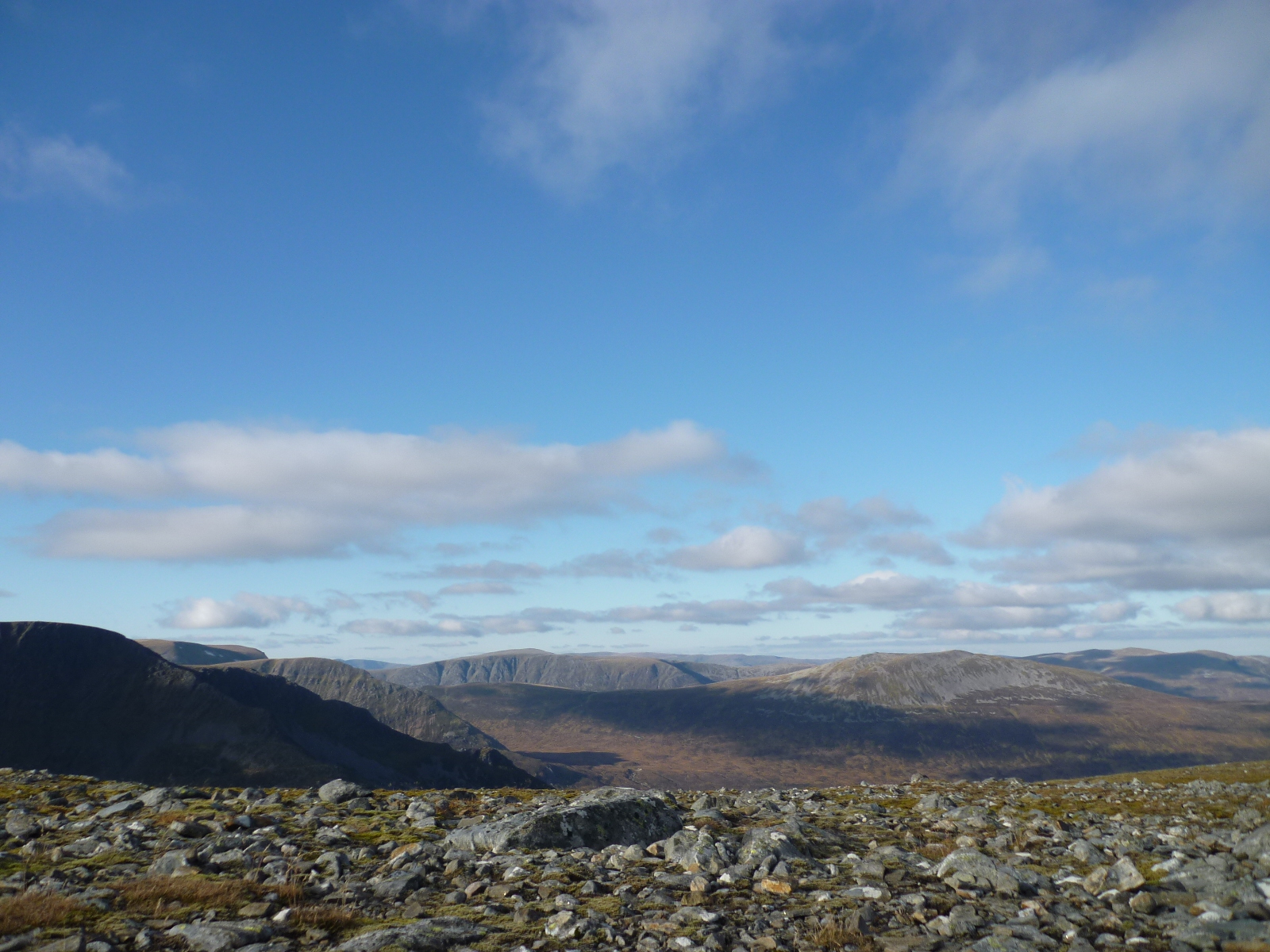 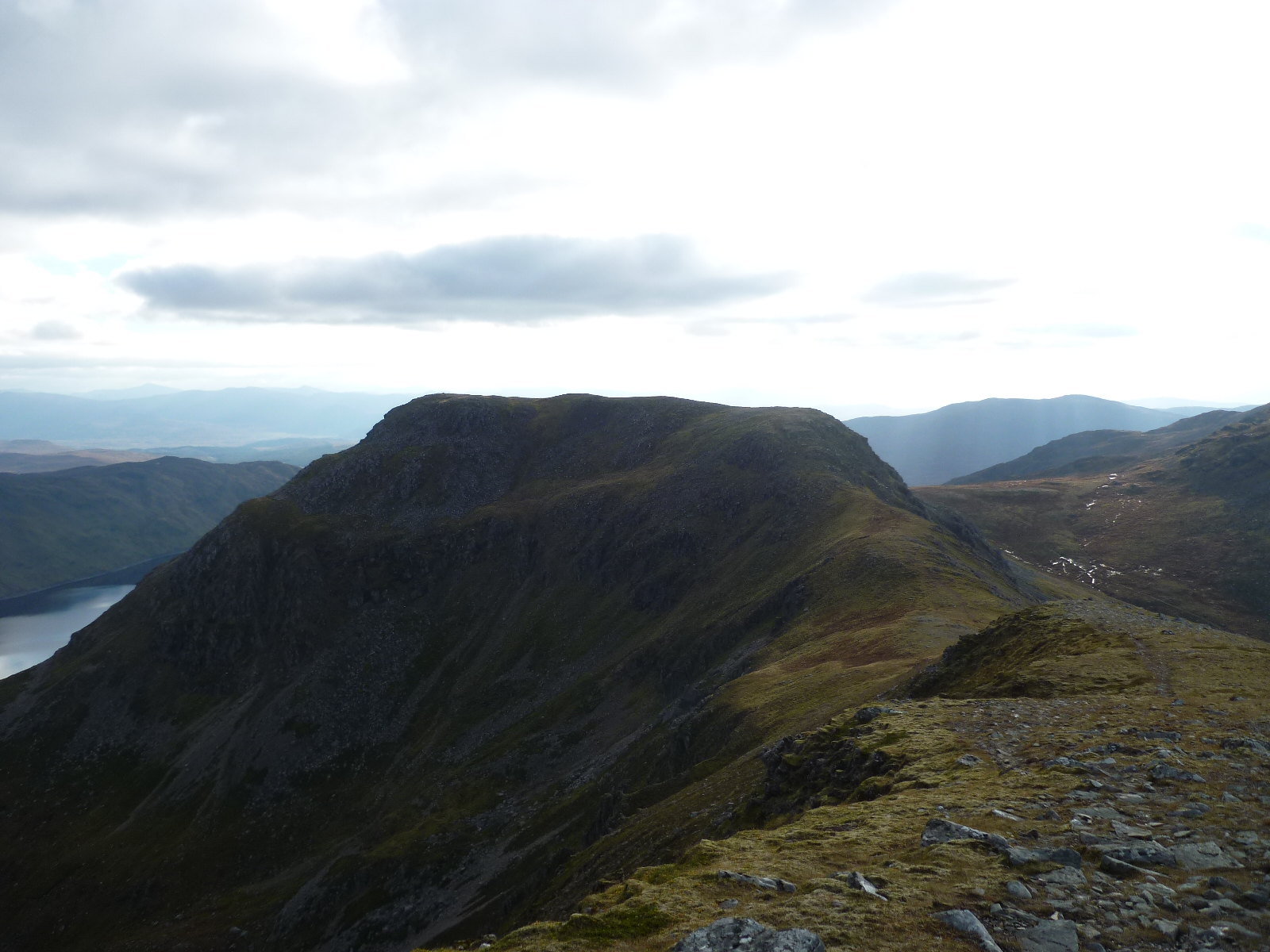 My plan was to camp as near the top of Ben Alder as I could, and I was getting slightly conscious of time as I was going at my usual plodding pace with about 2 hours before it got dark. As I dropped to the Bealach Breabag and started the tough pull up to the plateau, my time concerns weren’t helped by the need to constantly stop and look westwards at the incredible, beautiful view and the free light show that nature was giving. 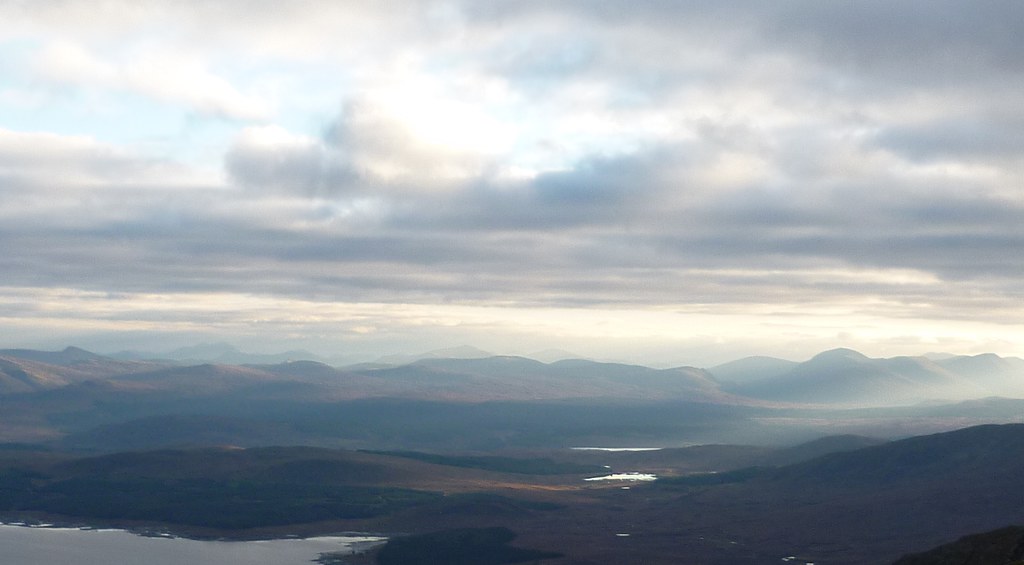 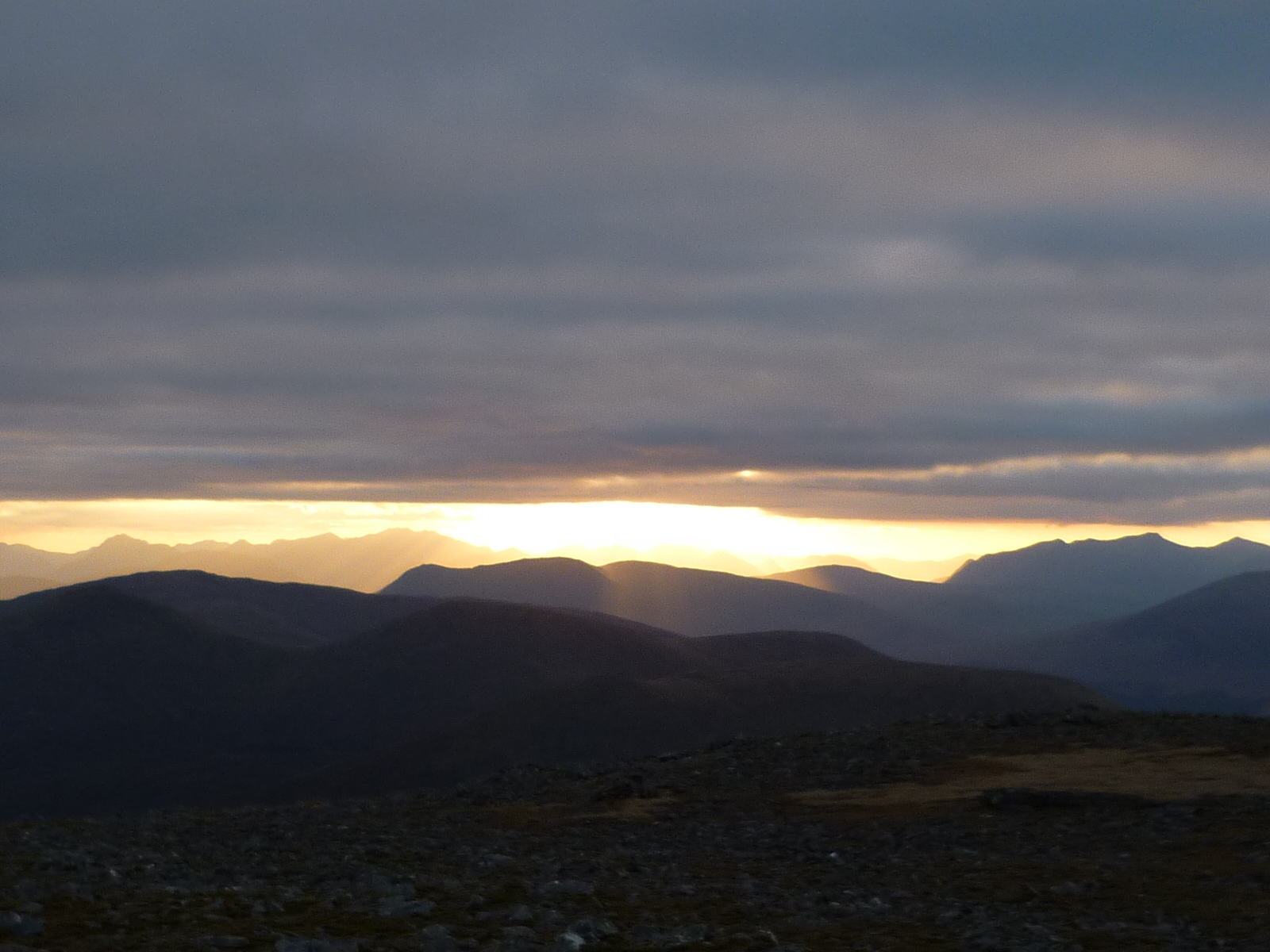 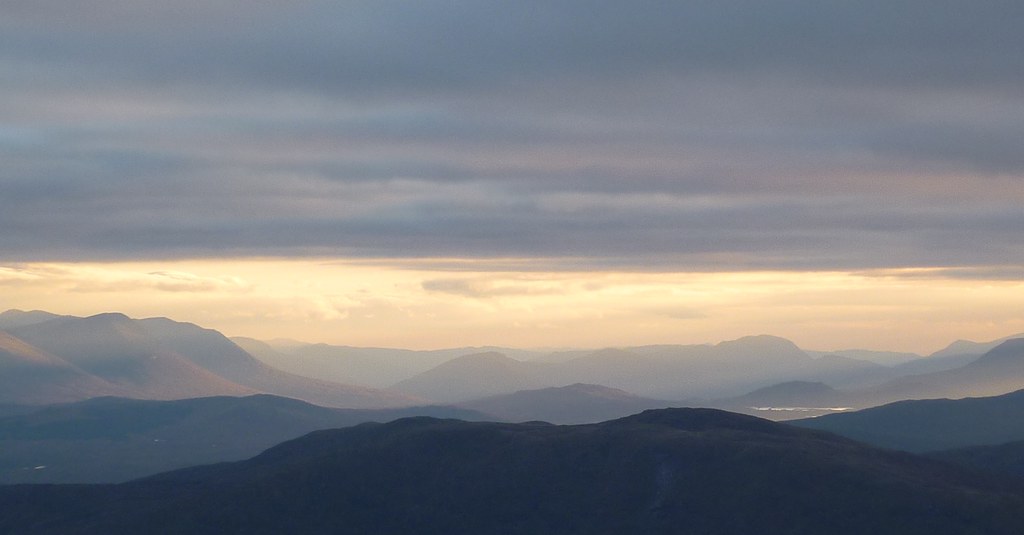 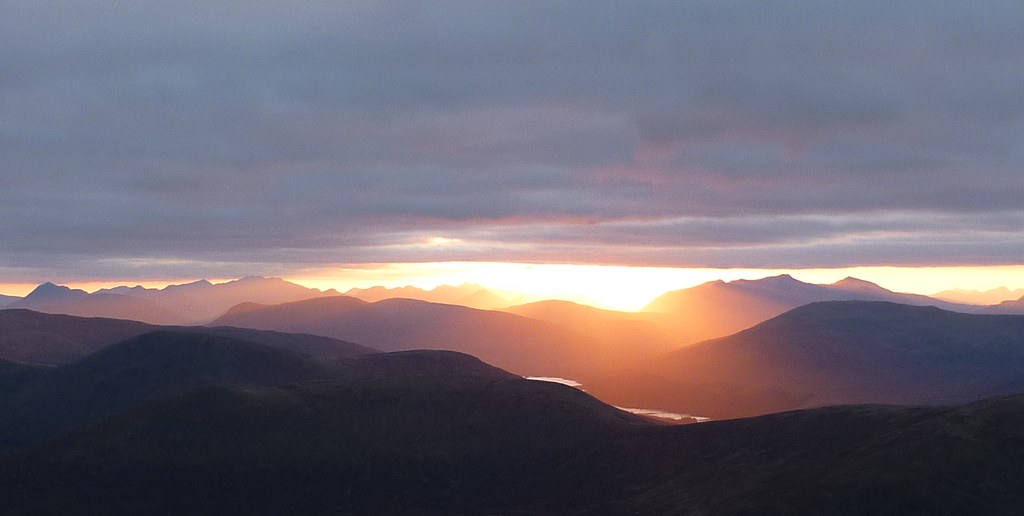 Finally I got to the top, and wandered down a short way and got the bivvy up. The picture doesn’t come close to capturing the colour - the sky was a deep fiery red, and as vibrant as I can recall seeing – it was like the gates of hell were opening up over Lochaber 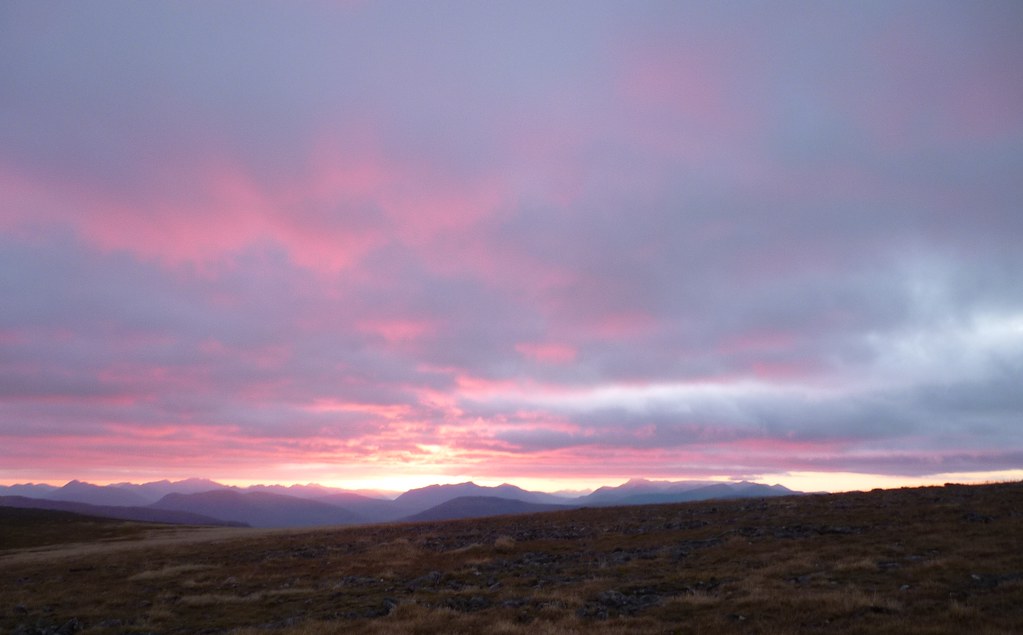 A surprisingly decent sleep, and it was up and away with a rather lazy late rise of 0830.

The best of the days weather seemed to be away towards the west. 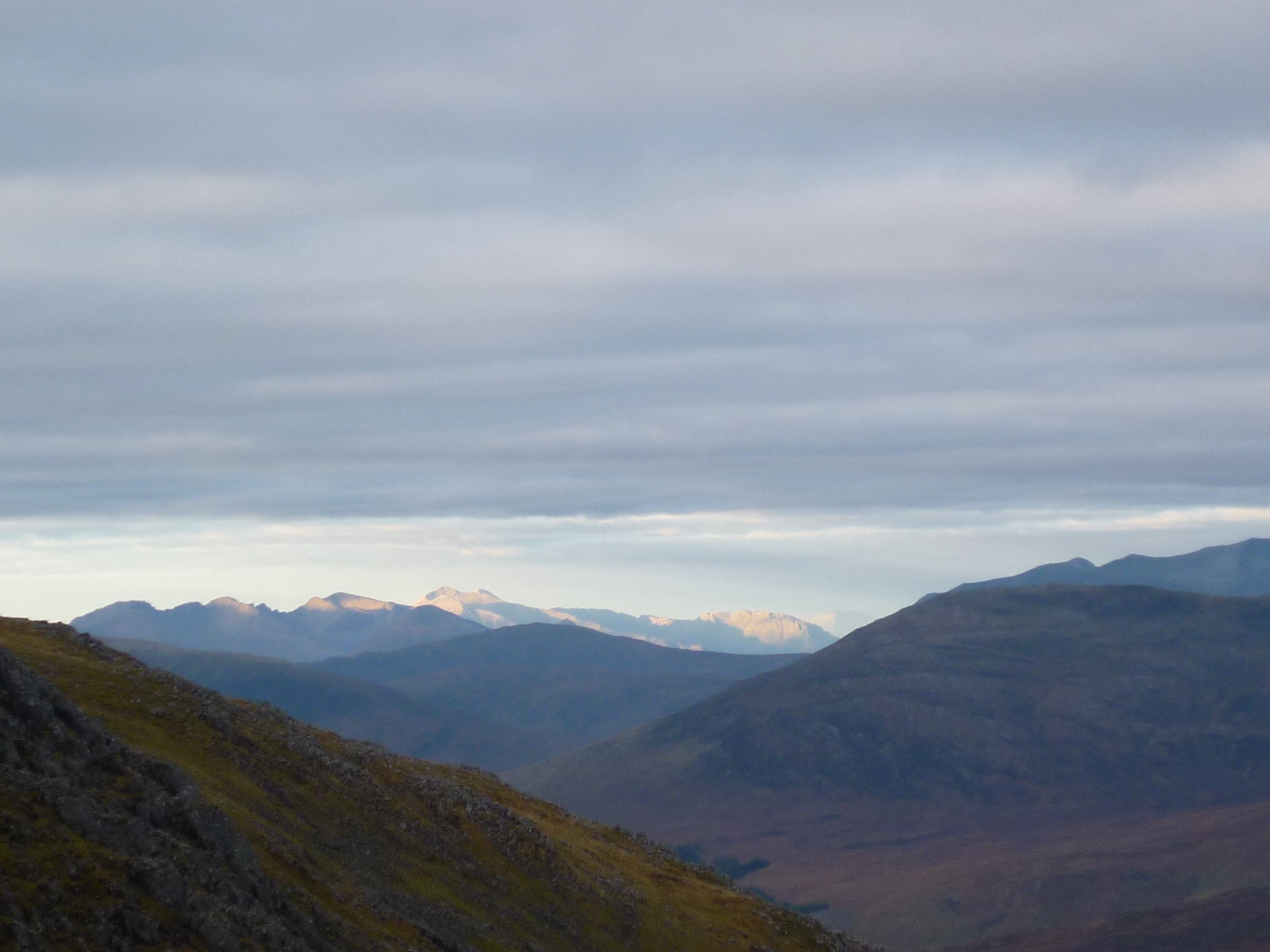 I dropped down to just west of the Bealach Dubh and contoured around Sron Ruadh into the Coire a’Charra Bhig up to the bealach between Beinn Eibhinn and Aonach Beag. I dumped – with some relief – the heavy pack and enjoyed the stroll up to the summit of Eibhinn. I was still overtaken by a chap who told me he was a double compleater and had just finished the tops too. Some effort, and reduced the feeling of inadequacy as he zoomed past me on the way up and then on the way down!

View of over to Ben Alder from Eibhinn 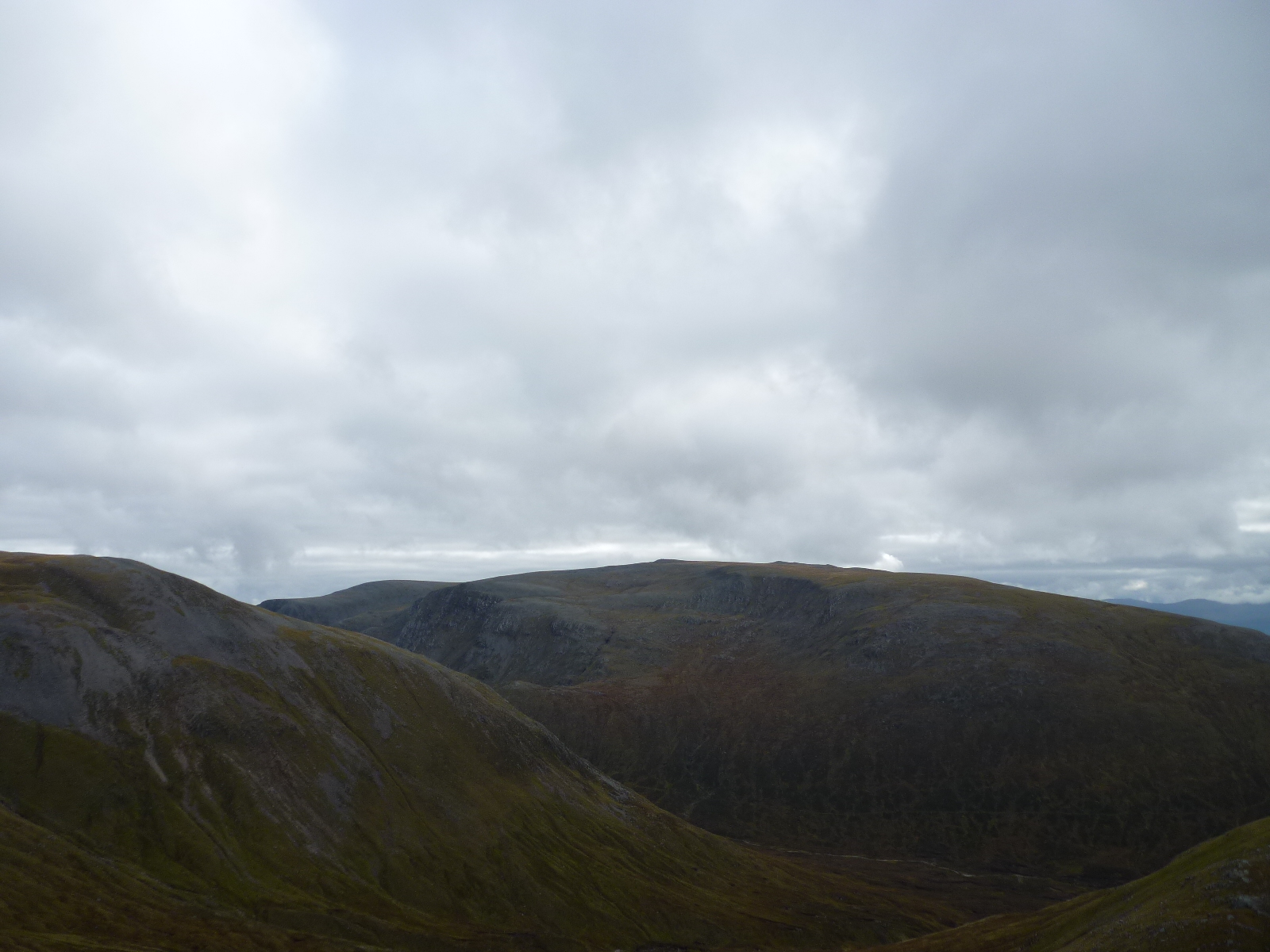 And the route ahead to Aonach Beag and Geal-Charn 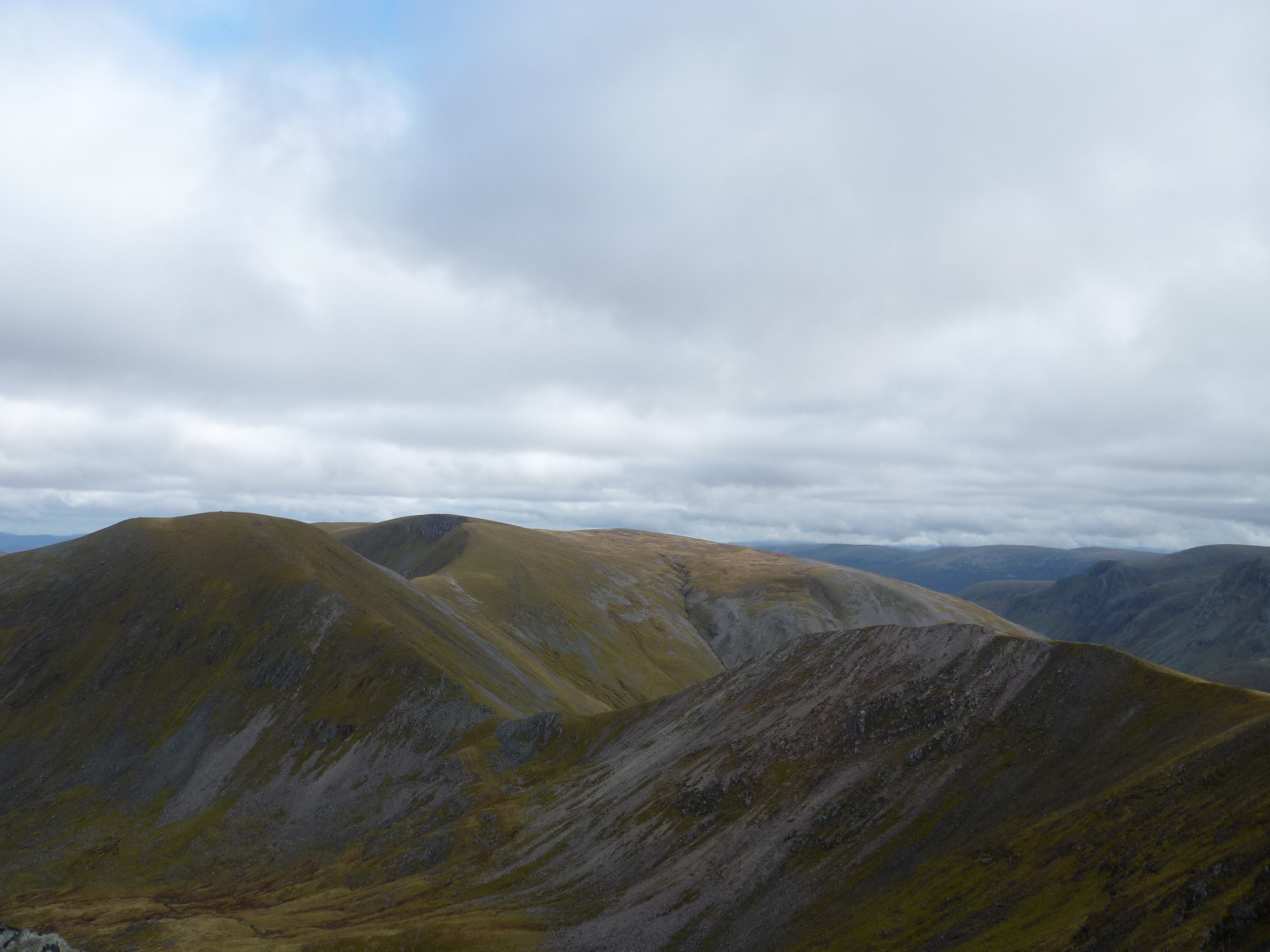 Its straightforward and easy walking over these two, and the views were holding up.
Looking back to Aonach Beag and Eibhinn from Munro 3 of the day. 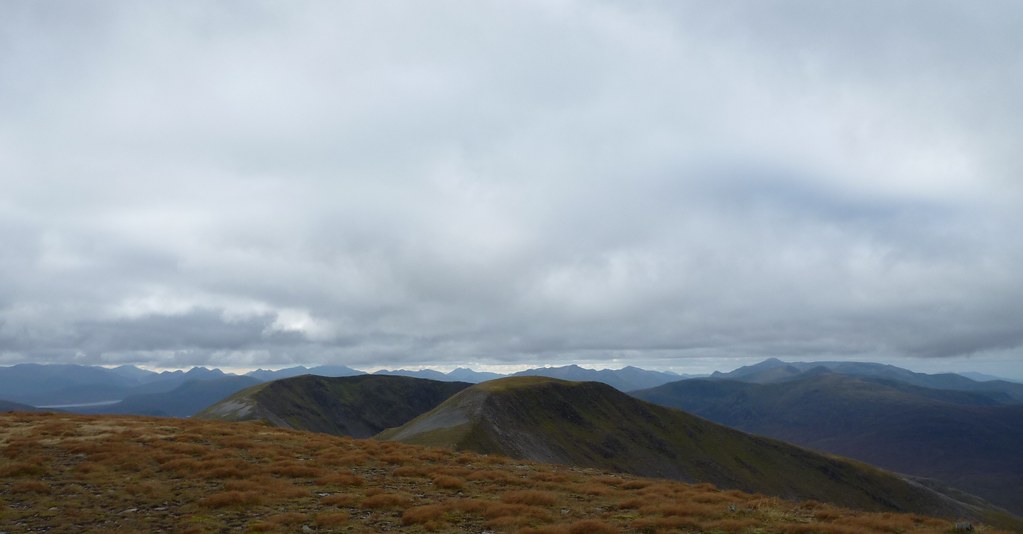 The summit plateau of Geal-charn is frankly bizarre compared to the other tops on the ridge, and in poor visibility I’m sure could be challenging. The oddness is then compounded by the lovely little drop off toward Diollaid a’Chairn 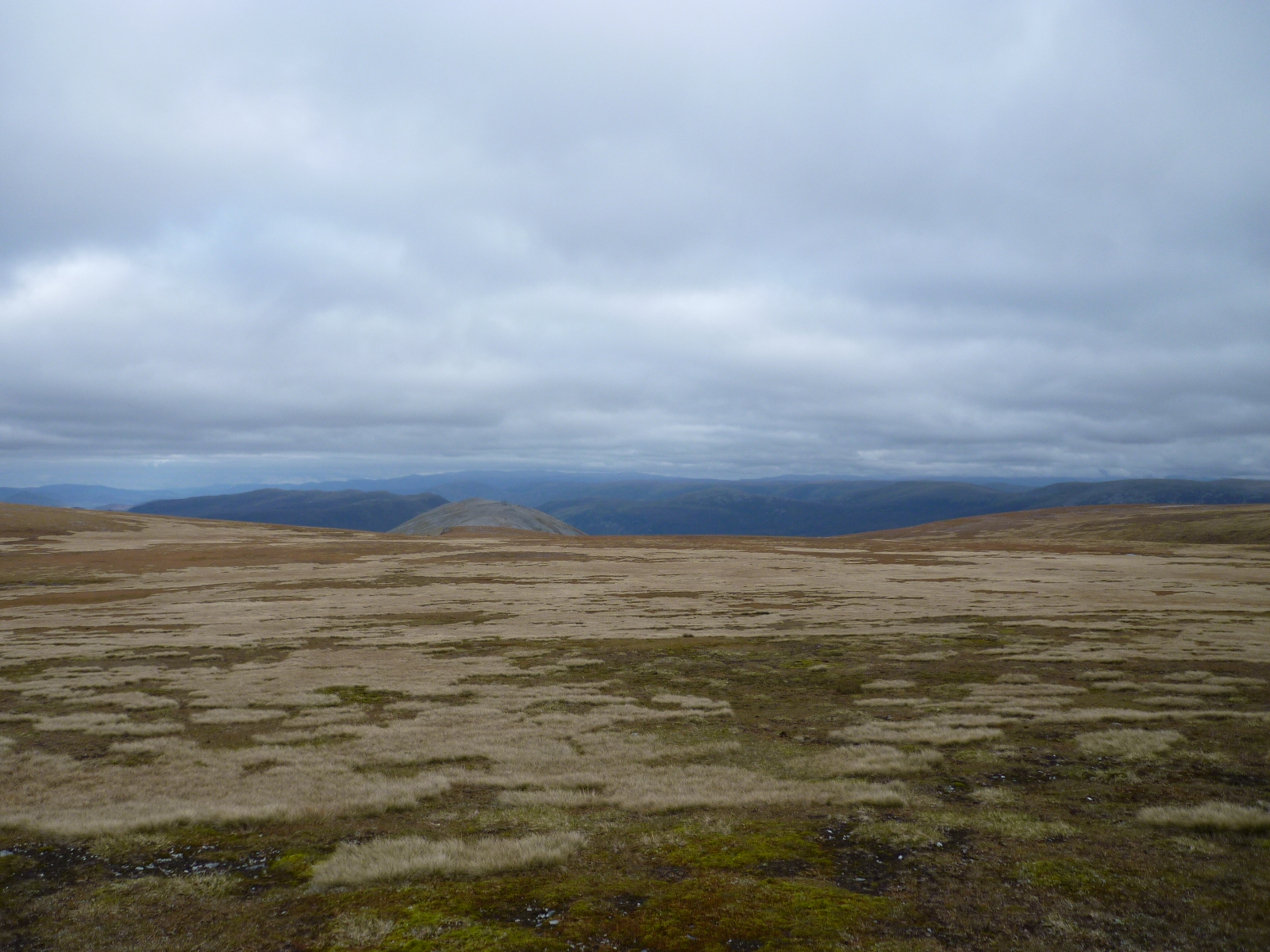 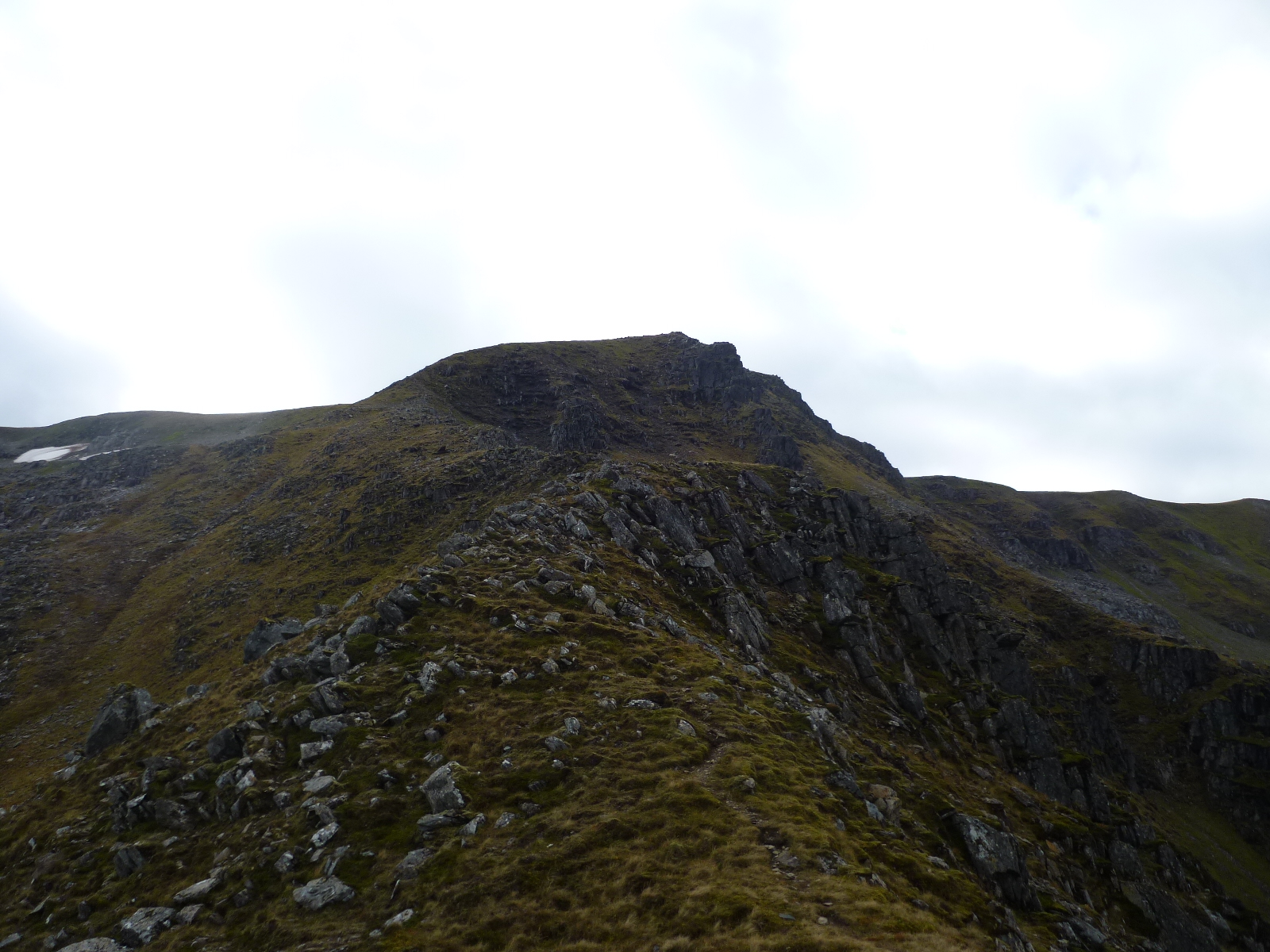 A final pull up to Carn Dearg and a look over to the what seemed by now very distant Beinn Bheoil. 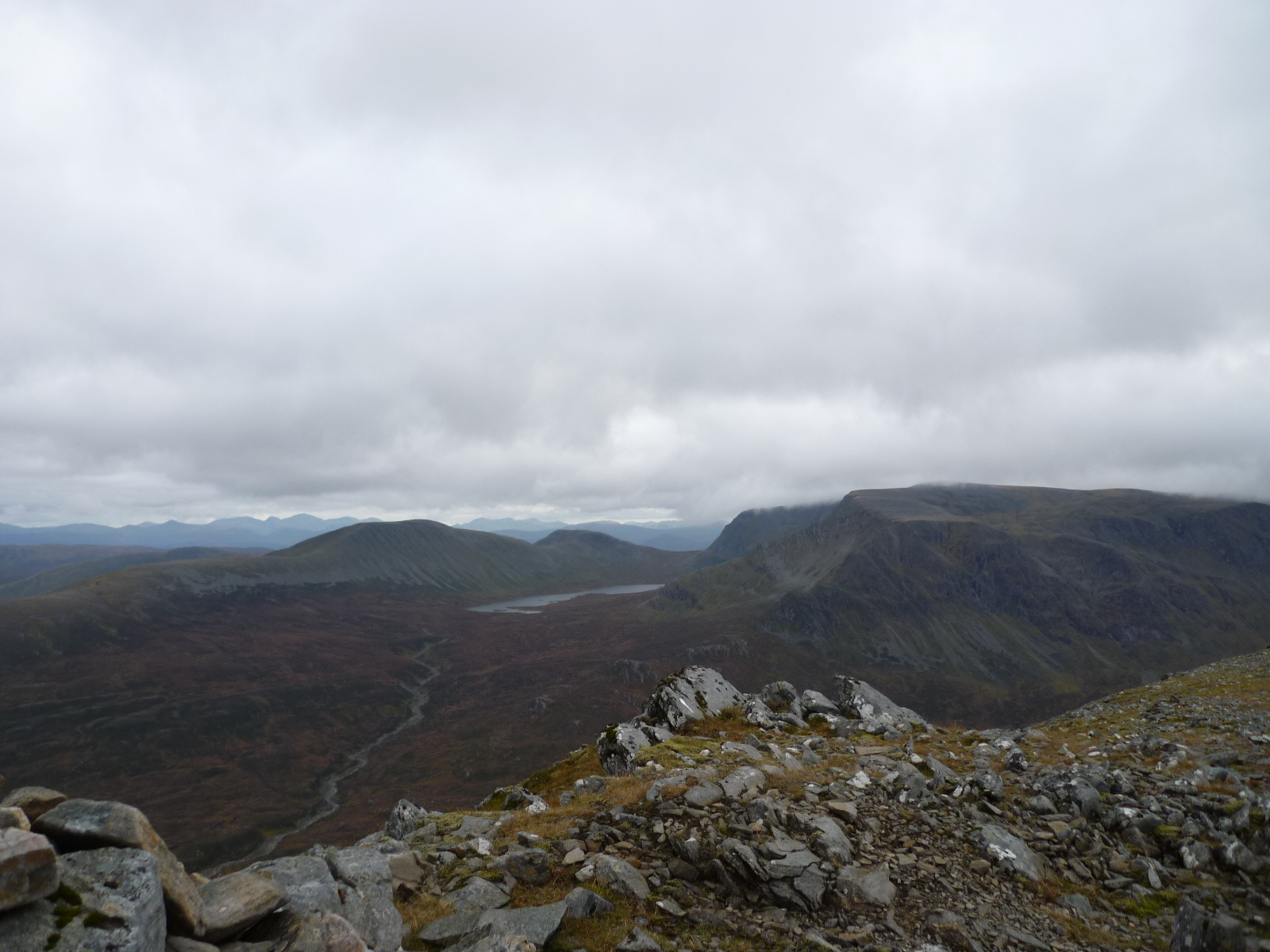 The summit selfie (which I will spare you for reasons of decency and taste) shows a mix of smugness, dishevelment, and knackeredness. I descended down the North East ridge before striking off to join the Loch Pattack path, then a head-down-don’t-stop-or-you’ll-never-start-again trog back to the bike. I’m convinced the horses watching me on the shoogly bridge were expecting me to pitch in. 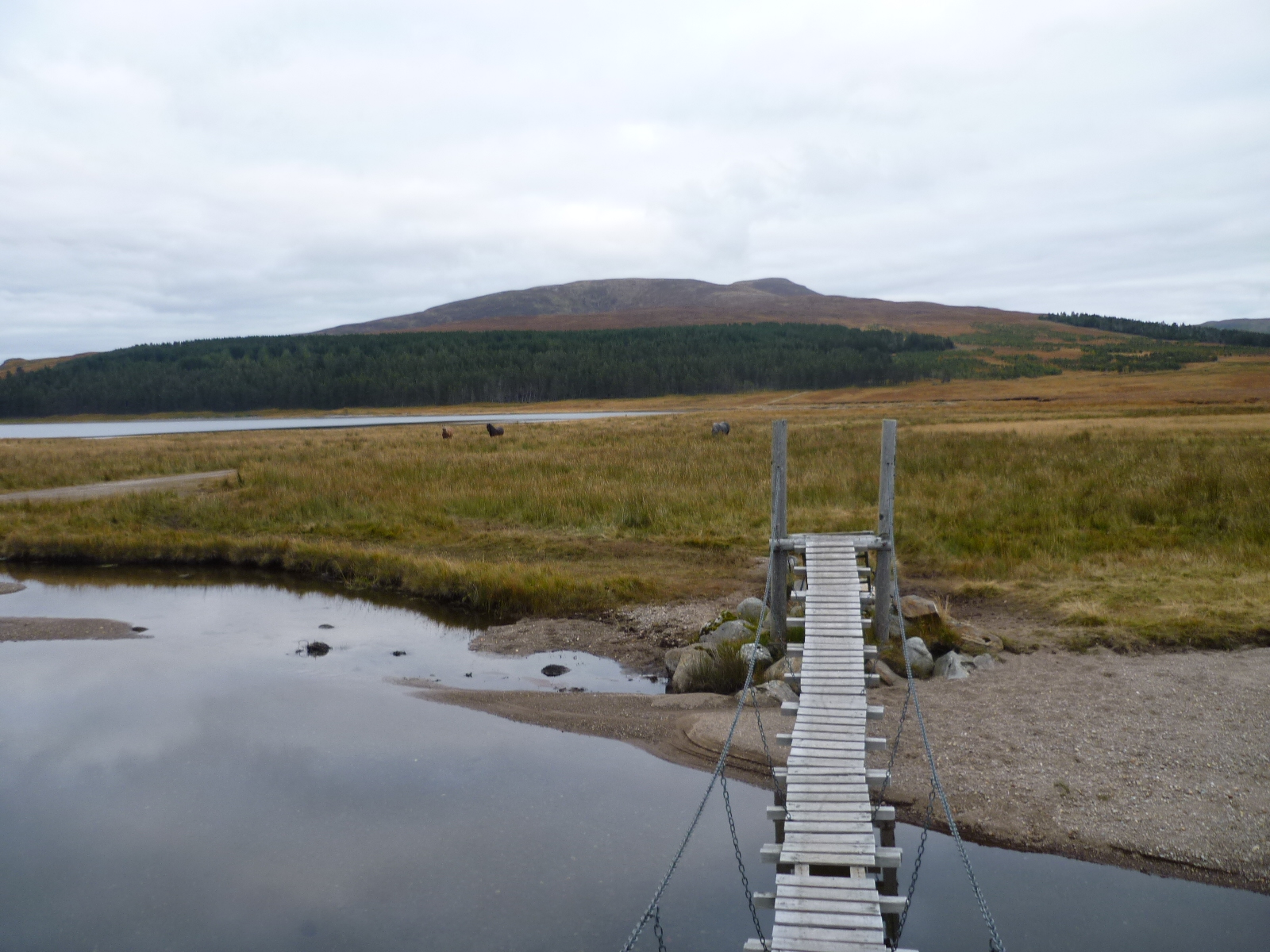 A final look back to the classic view before heading back along the road to Dalwhinnie. 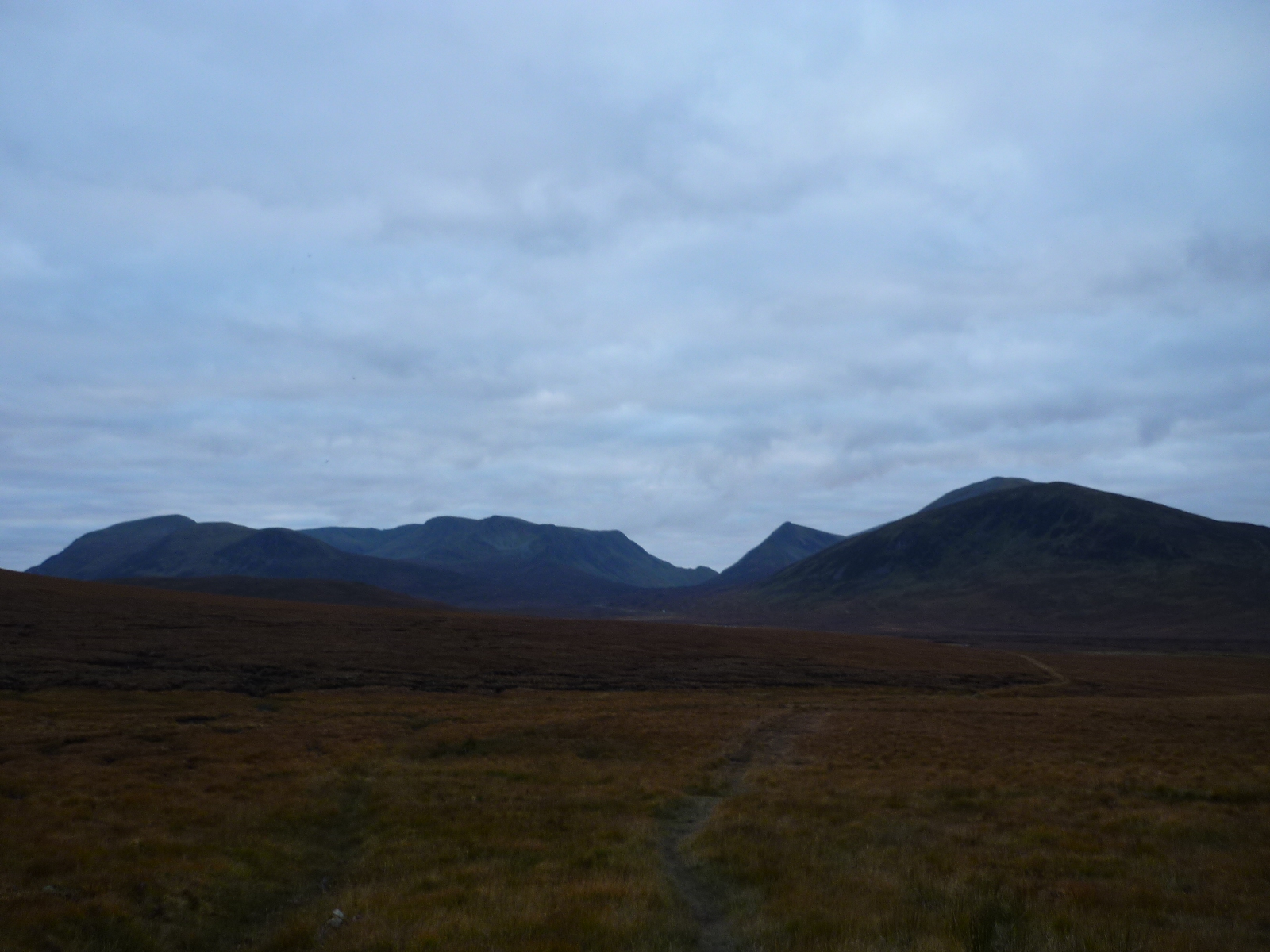 I had no memory of the hill on the road on the way in, but it did almost do for me on the way back. I kept myself going by an almost fanatical desire to find somewhere that sold Strawberry milkshake – funny how the mind works…
I got to the car 9 ½ hours after leaving the summit of Ben Alder, having covered just over 37 miles over the weekend with a pack weighing about 30kg.

Totally jiggered, but very happy, and if you like summit camping, a trip I’d recommend to anyone
Click to mark this as a great report. Register or Login free to be able to rate and comment on reports (as well as access 1:25000 mapping).