Roaring to go at Gairich


Sheepish moments on some Amulree Grahams

After several days at the superb Jessie May's hostel in Birnam, it was nearly time to head southwards again. I wanted a last trip to the hills, but my brother still didn't feel like anything strenuous. So, my cunning plan was to get some early morning exercise, then get back in time to check out and have a leisurely day on our way to East Lothian.

This did mean indulging slightly less than I'd have liked while enjoying the weekly traditional music session at the Taybank Inn, then a rather early start. About 10 miles of driving brought me to Amulree, where I parked by the community centre (parking free/by contribution) and was on my way by 6:15 am.

The sky had been getting lighter as I went. I was too low down (or too late starting) to get a direct sunrise, but it did catch beautifully on the clouds to my left. I kept up a brisk pace for about 1/2 mile of road walking alongside the A822 - I had remembered to take a head-torch, to help make myself visible. There is just sufficient verge to at least jump onto when traffic comes, though actual walking (or jogging) is better done on the tarmac when safe to do so. South beside the A822

I soon reached a turn-off to the left, leading to Girron and a Rights of Way Society fingerpost to Milton Burn, 7 miles. Following that through several gates led past the houses at Girron and then turned southeast on a track above the Girron Burn. That helped making progress and gaining height, though I'd decided to walk the route anti-clockwise, so was going to need to turn right and cross the burn at some point. 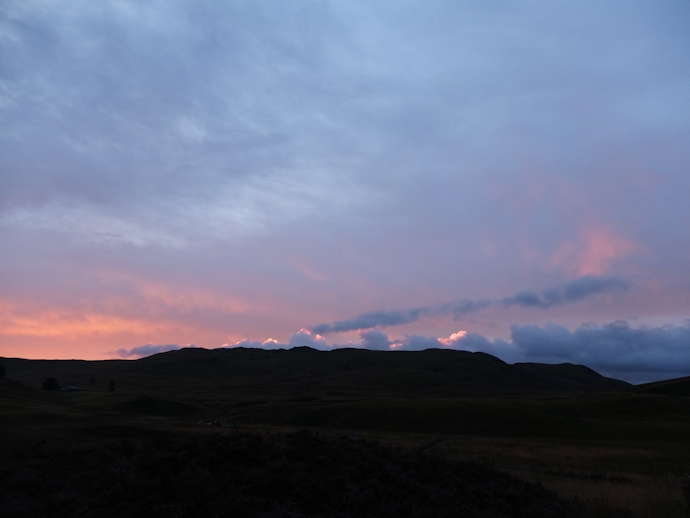 The glen floor and burn caused no issues crossing (the weather had been quite dry for at least a few days previously). Then I had short heather - I'd guess managed for grouse - covering the slopes up Creag Ruadh Stocach. This was enough to feel warm, with the sunshine starting to come through, though caused no difficulties. I met the main obstacle of the walk once up onto the ridge: a new-looking pair of electric fences, running in parallel along the fenceline marked by OS. This led along the high ground and around to Meall Reamhar. Even the higher cloud seemed to be clearing and lifting, giving good visibility of the walk ahead. The fence did force me to compromise on visiting the 601-metre point: instead, I got to about 600 metres and decided that was close enough, "Testing" the fence found it to be very live indeed, which could have been a good wake-up if I hadn't already been raring to go and enjoying the morning. 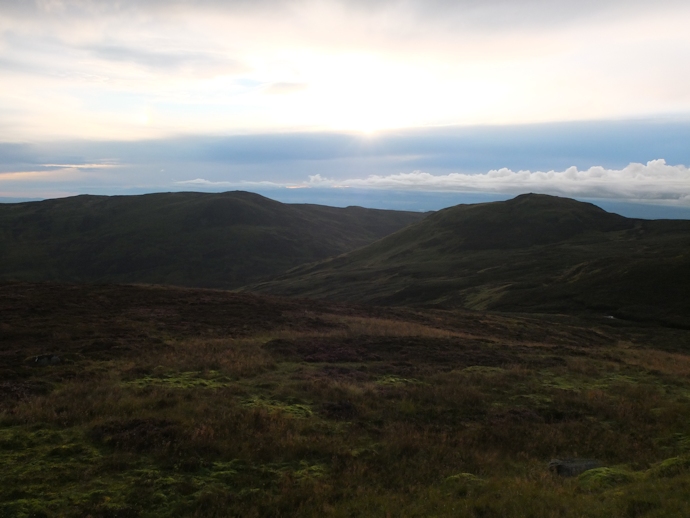 Following the fenceline around, I made progress eastwards and up to the cairn atop Meall Reamhar. This (and its neighbour) are at the edge of the Highlands, so offer good viewpoints of hills and glens in one directions, more open landscape in others. As well as the drop and rise ahead, if I was going to fit in a second hill for the day. 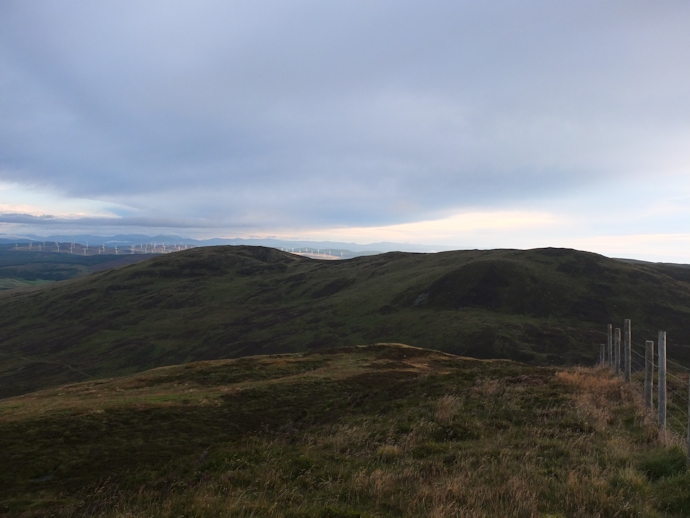 Thankfully the electrified fence turned away, leaving some more veteran posts and wire for the plunge and reascent (slightly over 150 metres drop and rise, a bit over 1/2 mile distance). Most of this is over heathery ground, though it was slightly boggy in the bealach before where the Milton track passes through.
Then there was another heathery ascent - enough to warm up (as if I needed that) and excuse a quick drinks break along the way. The ground eases off before the high point of the route, Meall nan Caorach capped with a trig point and, once more, offering some decent views. The quickest route from here would have been to cut downhill and rejoin the track northwest. But I wanted to include the minor top of Creag Ghorm, which made the route more of a natural horseshoe (and offered another hill to tick). So I turned northwards, following the line of fenceposts, descending slightly to turn northwest.

I noted some scattered sheep grazing the heathery turf, but didn't pay them much attention on my way to the few rocks at the summit. 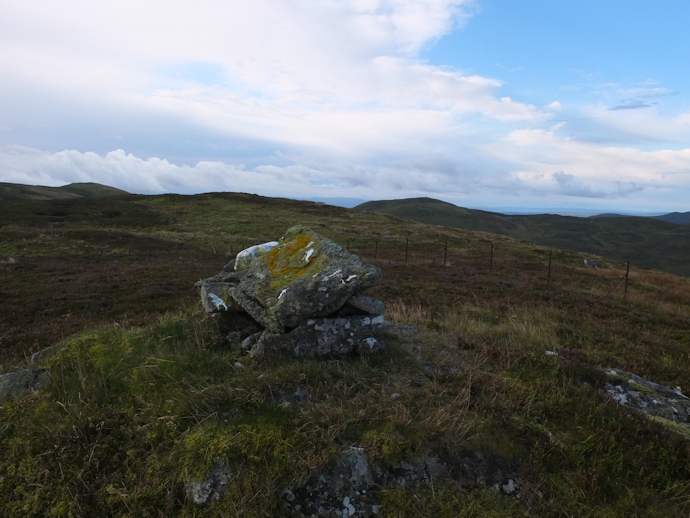 This was another chance to take in what the day looked like: quite promising, though the highest hills still wore their cloudy hats and scarfs. 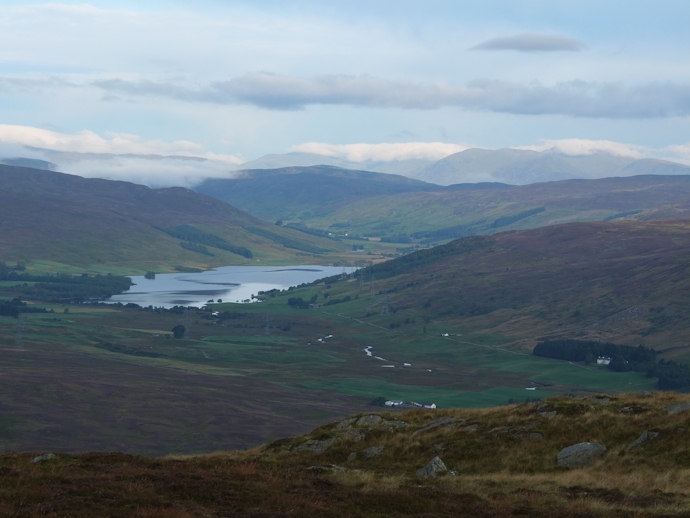 Then I noticed that not all of the sheep were grazing. One was at the end of a green peat-pool, only a stone's throw from the summit. And obviously stuck there, as she had managed to reach the edge but not get out. I checked the surroundings and situation. There was dry ground on most sides, so I first tried whether my approaching would be enough to make the ewe jump out on her own. No luck: she must have been weighed down by mire and water soaked into her fleece, despite some attempts to move.

So I quickly put on some gloves and took off my pack and camera, putting those aside. It's very lucky that the ewe had horns, since they provided me with the perfect handles to grasp. She was heavy, but my pulling and (perhaps) her efforts were enough to get out from the pool.

I was especially glad to see that the ewe could move a few steps off, once released, before she sat down in the heather. And she was holding her head up, hopefully not hurt by the hauling. So I collected my things to head downhill, feeling optimistic that the ewe should dry out and recover with some warm sunshine. I made a brisk descent of the heathery, then grassy slopes back onto the same track I'd taken before. Gambolling down the slopes

I did spot and hail the driver of a pickup that I noticed near some buildings above Girron, in case they had been to do with the sheep, but they were not. So I decided against doing anything further and simply returned to Amulree by the way that I had come. There was blue sky and warm sunshine by my return at 9 am. That let me get back to Birnam with time for a shower and second breakfast, followed by ... not quite such a leisurely day as I'd promised, but one with very minimal ascent. Spartleton Edge to the Herring Road

How I Stuic around a tempestuous Lochnagar