the ghost of mad meg

On what was forecast to be the best day of the week with 80% chance of cloud free munro tops, we set of on Monday night for 3 hours in the car to Creag Meagaidh nature reserve.
We had a look at the parking which had a couple of campervans parked there already and then drove on to the end point of our planned walking route, 13km up the road. This is the start/finish for Beinn a'Chaorainn and Beinn Teallach at Walkhighlands route description.
But we hoped to do al 5 Munro's in 1 go, so we dropped the bikes here and found a quiet place to sleep in our car.
By starting at CM nature reserve, we gave ourselves a lot of options to get of the mountains early if we felt our plan was to big an ask for the day.

The SUV we have now, proved to be slightly less comfortable to sleep in than the estate we had before. After a night of tossing and turning we started walking from the Creag Meadaigh parking at 7.
Beautifully maintained paths, but we were on the lookout for the cairn that would mark the turn uphill. Fortunately there was no snow at this level yet, because even a few centimeters would have covered up the 'cairn' and we might have mistaken the 'path' for just a waterstream.
Pleased with ourselves that we payed such good attention, we started moving uphill.
Soon there were patches of snow, some hard and easy to walk on, most were a soft slush where we'd sink in to our knees.
At this stage, we tried to stay of the snow because it made it so much harder to walk. About an hour into our walk, I misjudged a patch of snow, initially sunk down to my knees again, but as I tried to get out, I sunk deeper. I was now standing in a more than ankle deep puddle of mud, water gulping over and into my boots.
Imke was initially giggling, but soon came to the rescue and pulled my out. I sat down, emptied my boots and got grumpy. Honestly, I suggested to head back to the car right there and then, but Imke pulled out the coffee and a snack, pointed up to the top of Carn Liath which was not that far away at all with a lot of steady ground showing between the snow.
So we continued. A few minutes later we spotted a beautiful mountain hare, the sky was blue, the snow turned frozen and all was well. Carn Liath with the others in the background

With our crampons on and the snow nice and solid, we now made good progress and soon took a picture with the first cairn. With beautiful views back to loch Laggan, and the rest of the tops still covered in a little bit of cloud, we took another food break before heading for the next top. Easy conditions underfoot as the layer of snow flattened the surface. When we got to Uinneag Min Choire, the snow caused us some worry again, it is a steep little gutter you need to cross and there was a little bit of a cornice forming on parts of the opposite slope. The descent was mainly clear of snow and the shortest route to climb up to the edge was cornice free as well. Still...we heard the voice of the guy presenting the avalanche webinar last year in the back of our head...and were wondering if this was the part where we were gonna regret not having done a winter skills course. uinneag min choire, not as bad as it looked at first tops in and out of cloud

Again the snow was solid and we got up the other side no problem. Blue skies on our way to Stob Poite Coire Ardair. a fence line leading the way but when we found the summit we were covered in cloud. Because the clouds seem to linger around the top most of the time we didn't wait for it to clear, so a quick photo and on our way to the Window. 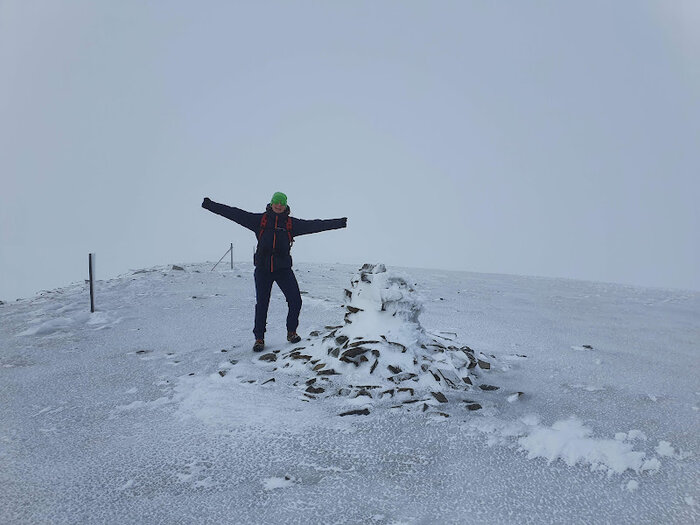 It didn't take long for us to emerge below the cloud again and it started breaking up so we decided on anohter sandwich break in the sunshine, looking at the Window and occasionally spotting Mad Meg's cairn on the opposite hillside.
It gave us a rather good idea of where to go next, which was great because of course by the time we got up to the plateau, the clouds had rolled in again. lunch at the window, with mad meg on top of the ridge

We found Mad Meg and I figured I had studied the map enough, to wing it with a sense of direction towards Creag Meagaidh. It had started snowing at this point and soon the plateau narrowed, which was exactly what we were expecting. But it also started going down, what was the opposite of what we were expecting.
As usual Imke is the one with a better sense of direction and she starts to point left and wonder out loud if that's where we should actually go. I get the map out and have to agree with her. It is only about a 100 meters before we find the right narrowing bit, uphill this time. Suddenly, we see something unexpected. 2 lines in the snow, about as wide as a footprint dissapearing into the cloud as a track without start or end point.. As we hadn't seen anyone coming up behind us all day we were wondering how these tracks had magically appeared. So close to mad Megs cairn nonetheless.. then we see a human shape seemingly gliding away from us in the distance.. The clouds become lighter again and our spirits are also lifting. We start chasing the ghost, excited now, about this rare encounter.
All of a sudden we remember we are here to bag Munro's and should be close to the 3rd one of the day. We stop for a second to look around, the cloud helps us by lifting completely and we spot the cairn. Creag Meagaidh ladies and gentlemen and ghosts!
At the southwestern end of the plateau we catch up with the ghost and it turns out to be a guy on touring skies. We might have come across as complete morons to him, His questions, "where have you come from today?" was answered with a sheepisly handwave in the direction we just came from and "Those 3 munro's".
"And where are you going?" is answered in just as much detail with: "the other 2 munro's over there". He can tell us the exact name of the route he skied up, just to check the snow up here, but than again, he is probably local and can actually pronounce all those names properly. In contrast to what we must have come across like, we knew exactly where we were and where we were going next. blue skies and a line of fence posts making our way easy once again. At the bealach a'Bharnish we descended a litte further down to avoid the deep snow and cornices at the place where people usually seem to cross (according to the blue route lines at Strava) 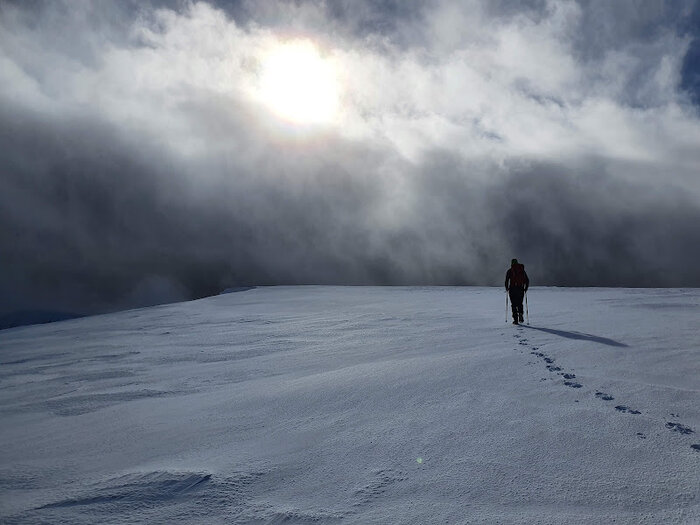 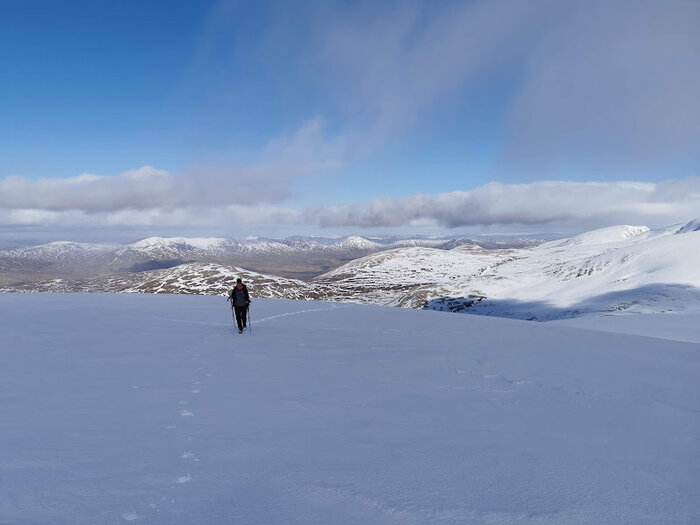 up B'a'C, sometimes it is nicer looking back

Going uphill once again, we start to feel our legs and decide that including Beinn Teallach might be to much for today.
As we get to the plateau and see the drop to Tom Mor, we are sure that we are not going to include BT!
We see some other walkers heading the opposite direction and it feels good to know more people are enjoying this glorious day. Close to the top we meet 2 guys on their lunch break, we have a little chat about the (in)sanity of hillwalking and whether changing a plan counts as an epic failure or just a different adventure.
On that note, we move on. We don't want to get to close to the edge because we have seen the big cornices and we aren't sure how far out we can safely walk... We look at a big pile of snow, is there a cairn under there? anyway, the ridge continues and it seems to get higher still. The sun is shining, we are happy to know that we'll tick of 4 munro's today and we can see where we are going and we don't get the map out anymore.
Only at the end of the ridge, at a nice cairn with fantastic views out across the valley, we realise that we are now at the 1049m top and have blatantly walked past the actual top at 1052m. But this doesn't spoil our day, because we did walk across there, so we still count it even though we don't have the summit picture to prove it.
(OK, we might come back some day for that picture) view from 1049meters at Beinn a'Chaorainn

Now it is just a downhill back to the bikes.. mainly pathless and very boggy as the snow turns to slush and lower down to water.. Not that I care, my feet have been wet all day, so it doesn't make a difference.
13 km on a bike is quite long after 9 hours of walking, but it is asphalt, it is reasonably flat and it gets us back to the car . And the legs enjoy the different kind of moving so it's a nice bit of cooling down.
Days like these are near perfect, now I can curl up for a couple of days feeling satisfied with the achievement and recover for the next trip!
Click to mark this as a great report. Register or Login free to be able to rate and comment on reports (as well as access 1:25000 mapping).