Easter weekend saw me move to South Ayrshire from Sussex in what's been a bit of a whirlwind. I'd stayed south while my mum was alive, with an intention to move to the Highlands when she was no longer with us. In November, she passed away, peacefully and very well cared for, and for the next couple of months I didn't think about my intended move - it would keep for a year or so.

But then in December, I found myself back in contact with my 'one', who I'd been forced to cut contact with in the early 90s. He was back home in South Ayrshire, and his circumstances had changed, so 30 years on we were free to be back in touch. Meanwhile, my mortgage was coming up for renewal, so come January I was deciding whether to make the move now or in a couple of years' time. Well, that decision took about a minute! So here I am.

After a beautiful revisit to Assynt on the first May Bank Holiday weekend (https://www.walkhighlands.co.uk/Forum/viewtopic.php?f=9&t=104795), the next Sunday he fancied walking Corserine, but from Loch Doon rather than from Forrest Lodge for a change. I'm pretty sure this was my first visit to the Rhinns of Kell in the Galloway Hills, and I was jumping at the chance to explore, and to look over to Shalloch on Minnoch where he'd taken me for an overnight camp and walk for my 21st birthday all those years ago.

We parked up at the little Forest Drive parking spot at the mouth of Carrick Lane burn, and while he booted up, I wandered down to the water in search of wildlife, and found a foraging sandpiper. 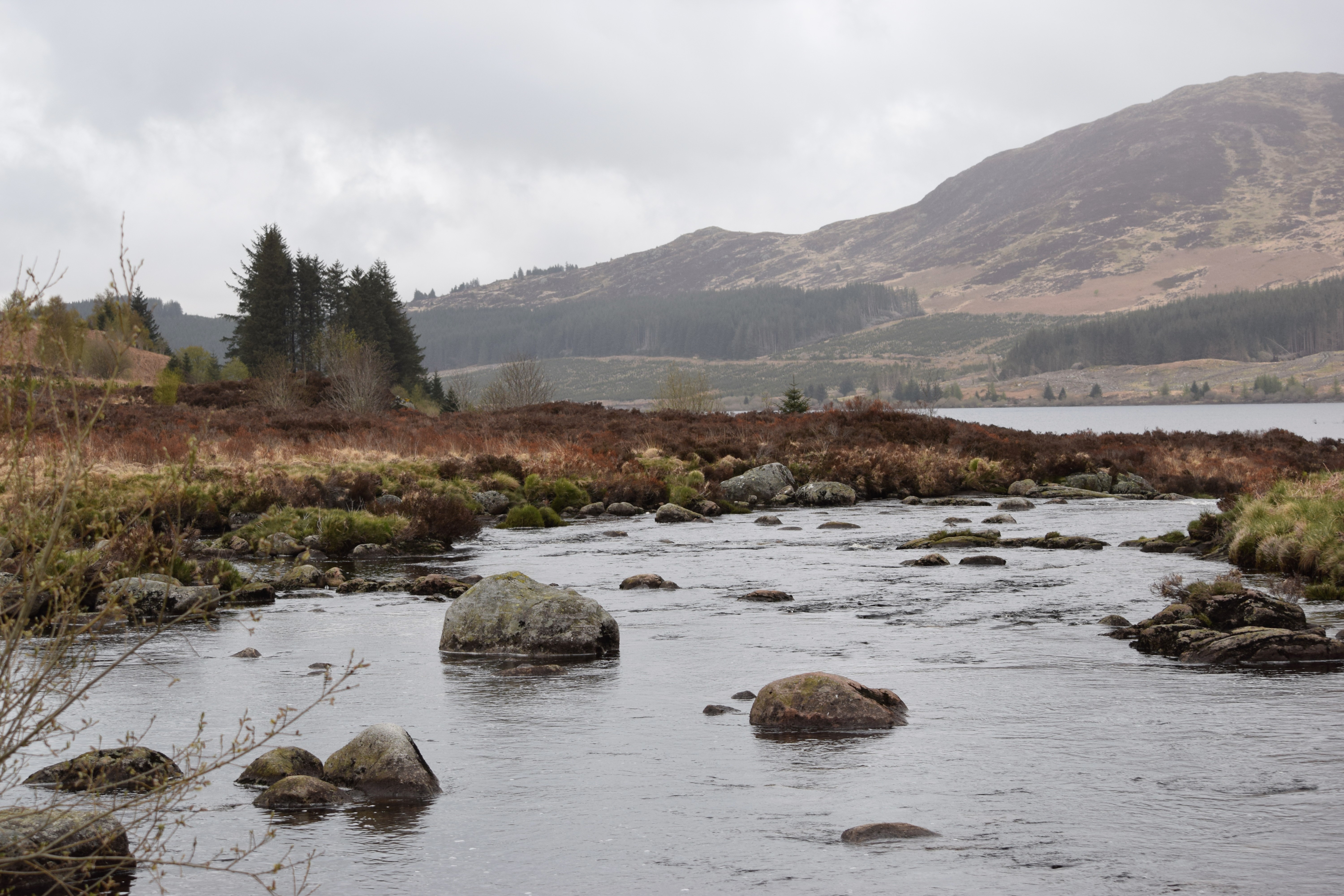 002 Loch Doon with Black Craig on east side 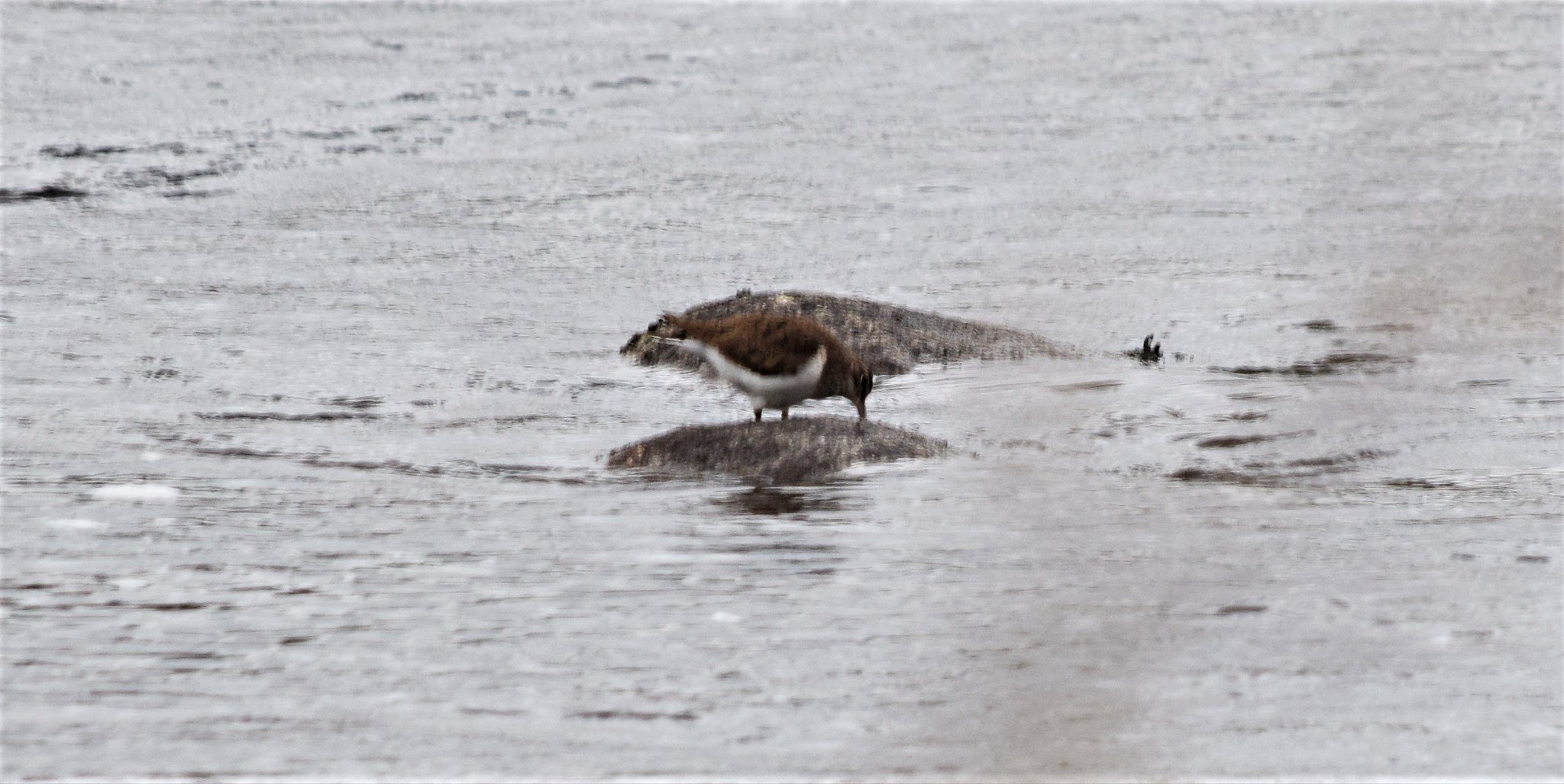 Then off we went, along the forestry track along the southwest side of the loch to cross the Gala Lane burn. There had been a ton of felling, so where he was used to walking through a dark green tunnel around here, today all was open, and afforded us a fine view of.... our destination cloaked in cloud. 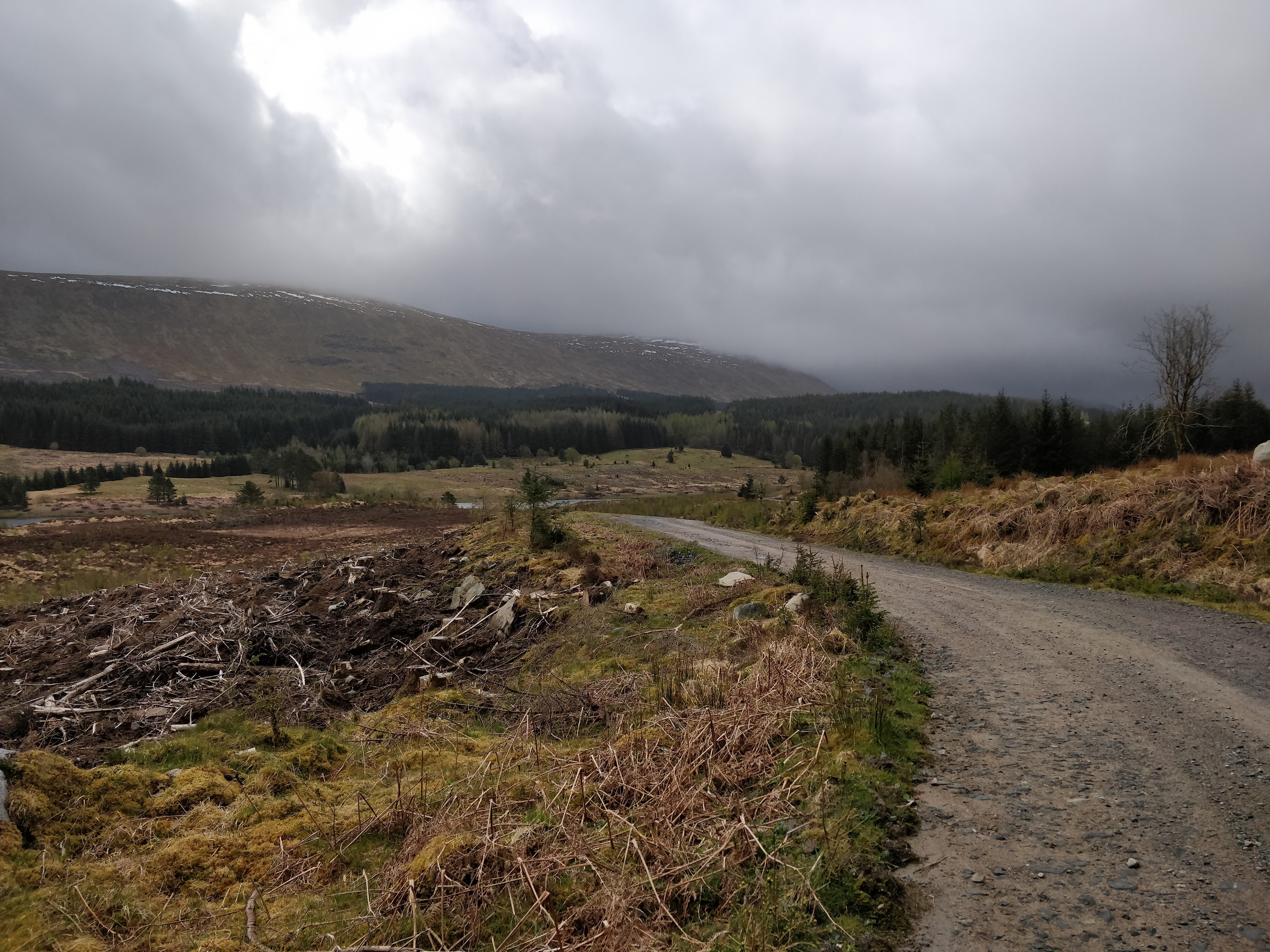 006 Looking claggy on our hills

But it did also mean that over our shoulders, Loch Doon itself stayed in view, as did the hill-range to the east. Gentle giants, all inviting a lot of wanders to come, which I'm looking forward to - quite a change from my left-behind South Downs! 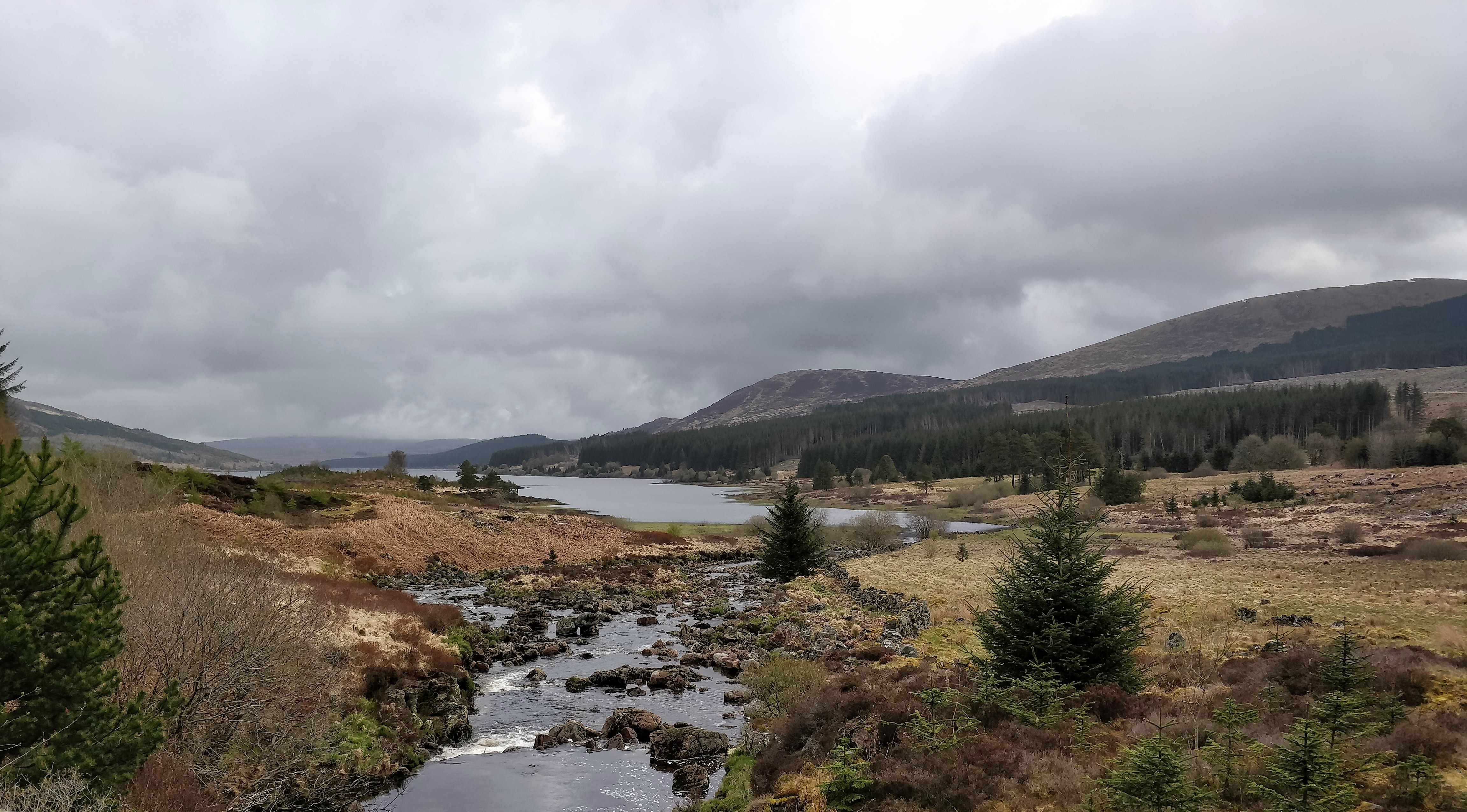 007 Black Craig and Coran of Portmark - Carsphairn hills in distance

One thing I've really missed during lockdown has been the sound of burns. The chalk hills of the south allow water to seep straight into the hills, and then emerge as gently flowing chalk streams right at the foot of the hills - beautiful of course, but lacking the music of a burn trickling beneath your feet, or crashing in spate over upland rocks. And I was so grateful to hear sounds of tumbling burn again 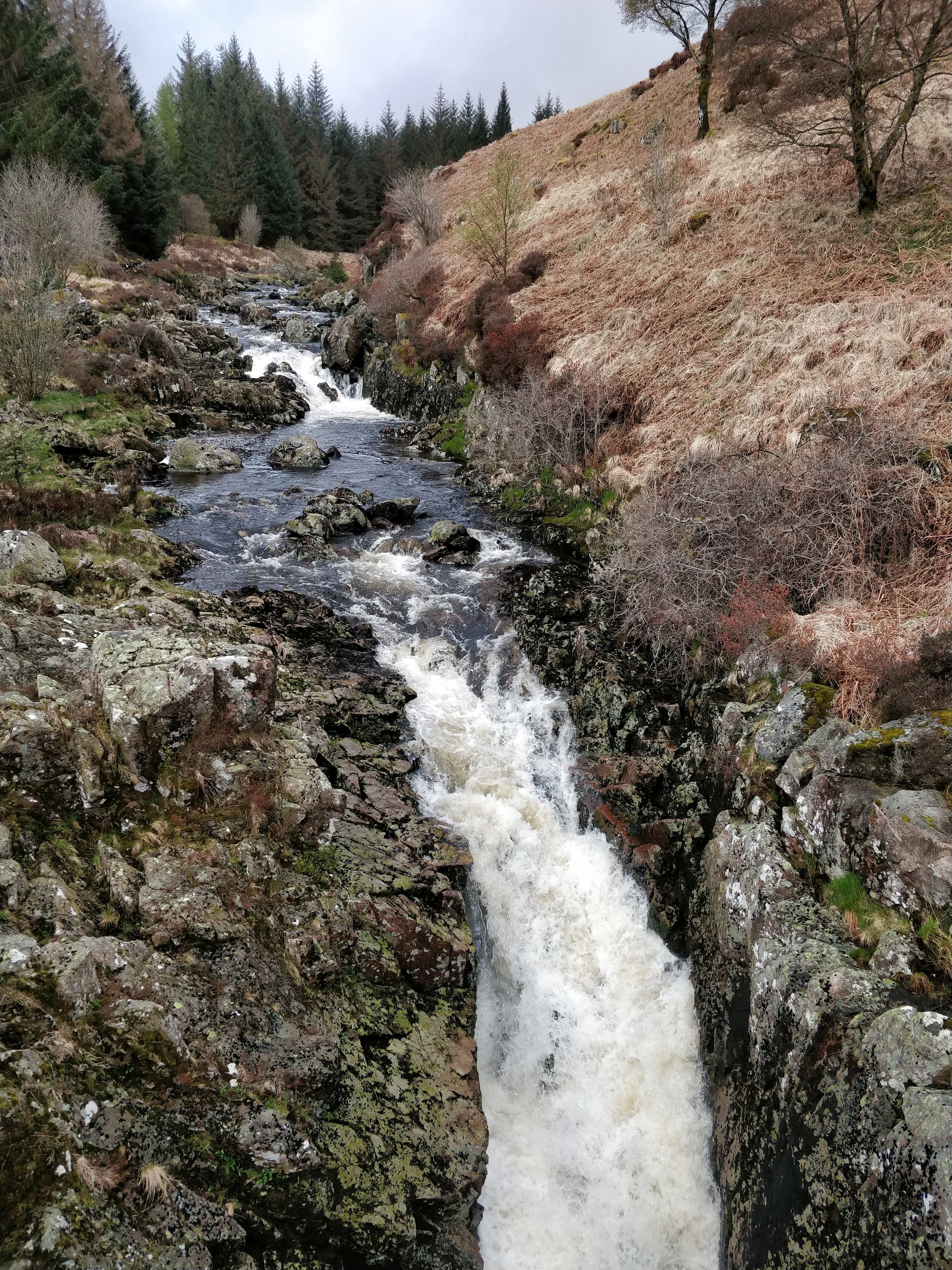 We'd intended to head up through a substantial firebreak, not far after crossing Gala Lane, and emerge on to Meaul, but the higgledy piggledy felled trees put paid to that plan. So on we walked, south towards the turn in the foresty track which led to a picnic spot marked on the map. Ahead lay the Mulwarcher range, which I'd last seen from the Merrick in 2017...

... and the two hills we were ultimately to walk today, with just a trace of snow left on them, and an awful lot of clag

We came to our firebreak spot, where I took a look west... 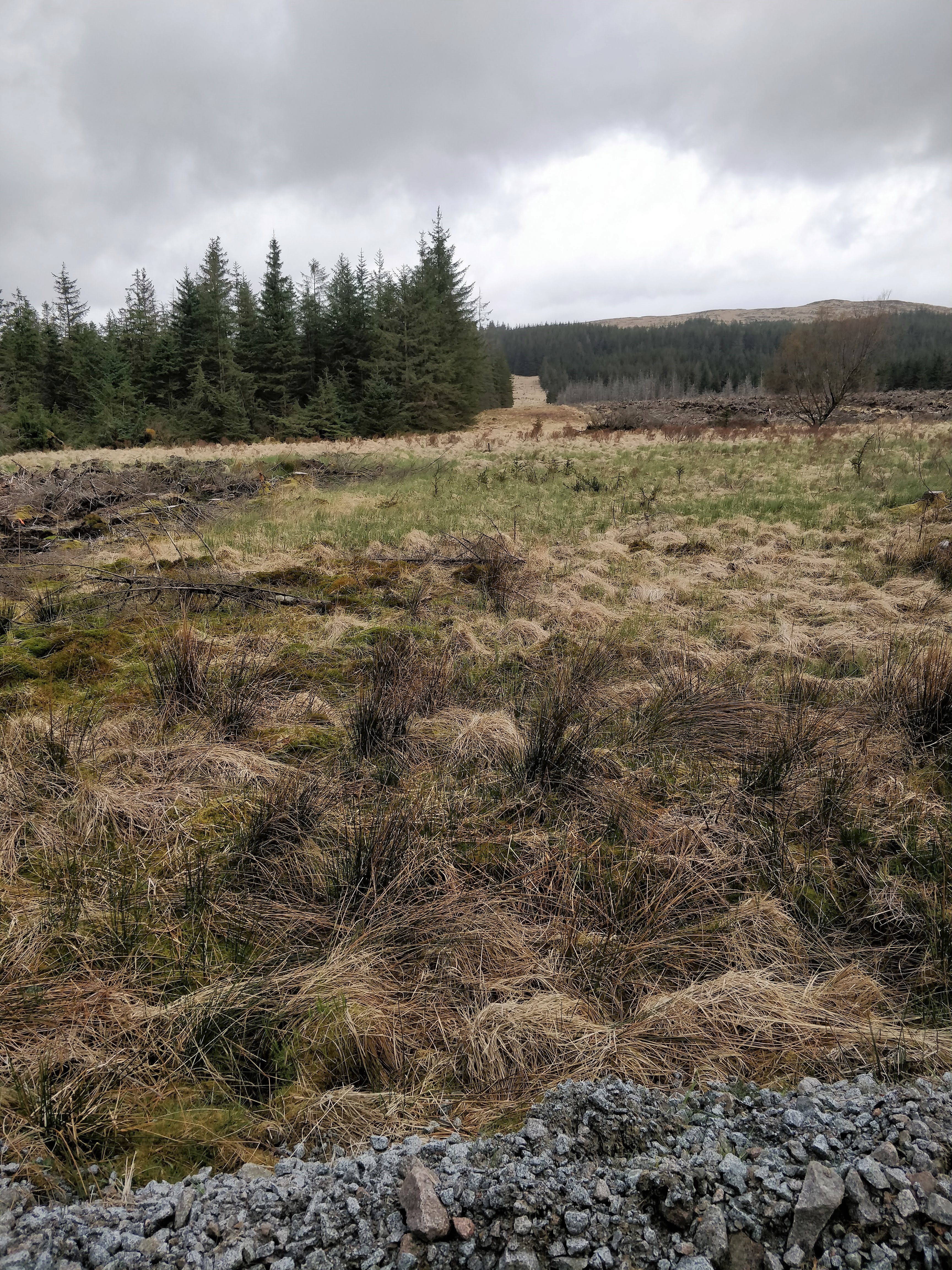 011 Firebreak on west side 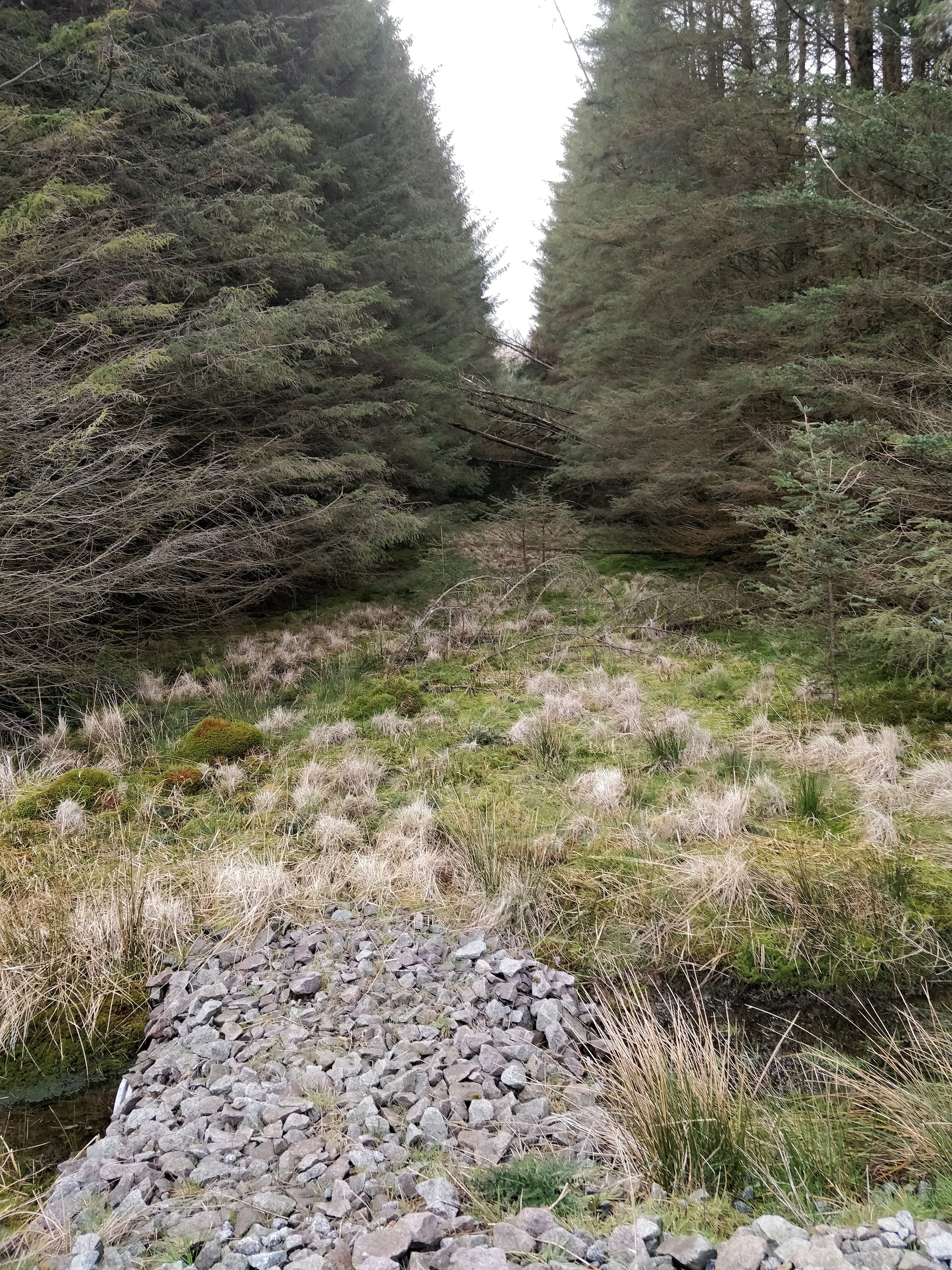 012 Our abandoned firebreak on east side 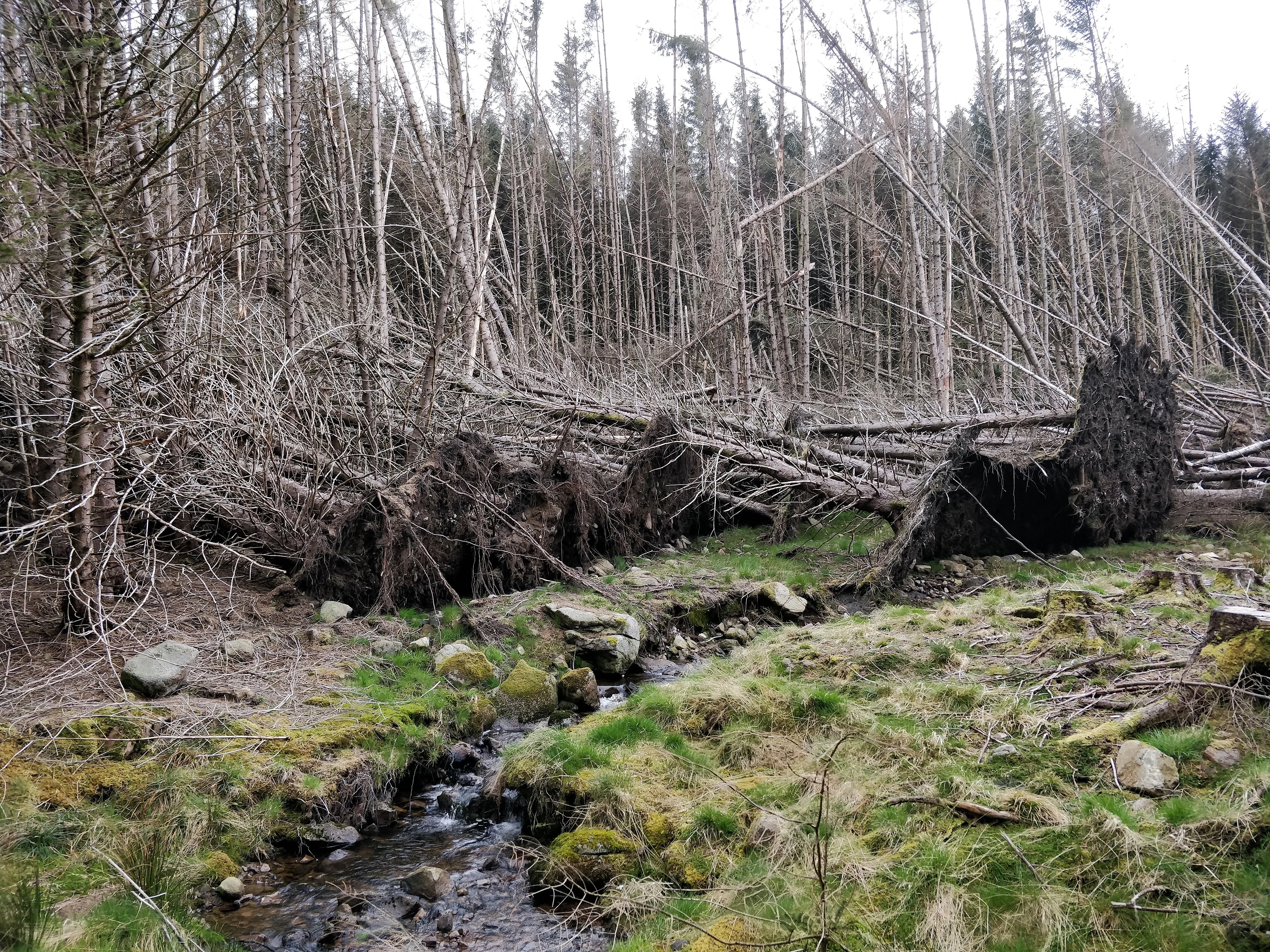 ... and instead we entertained ourselves with the flora, and the wonderfully named Bunded Grab Tank on our plod along the logging road and revised route. 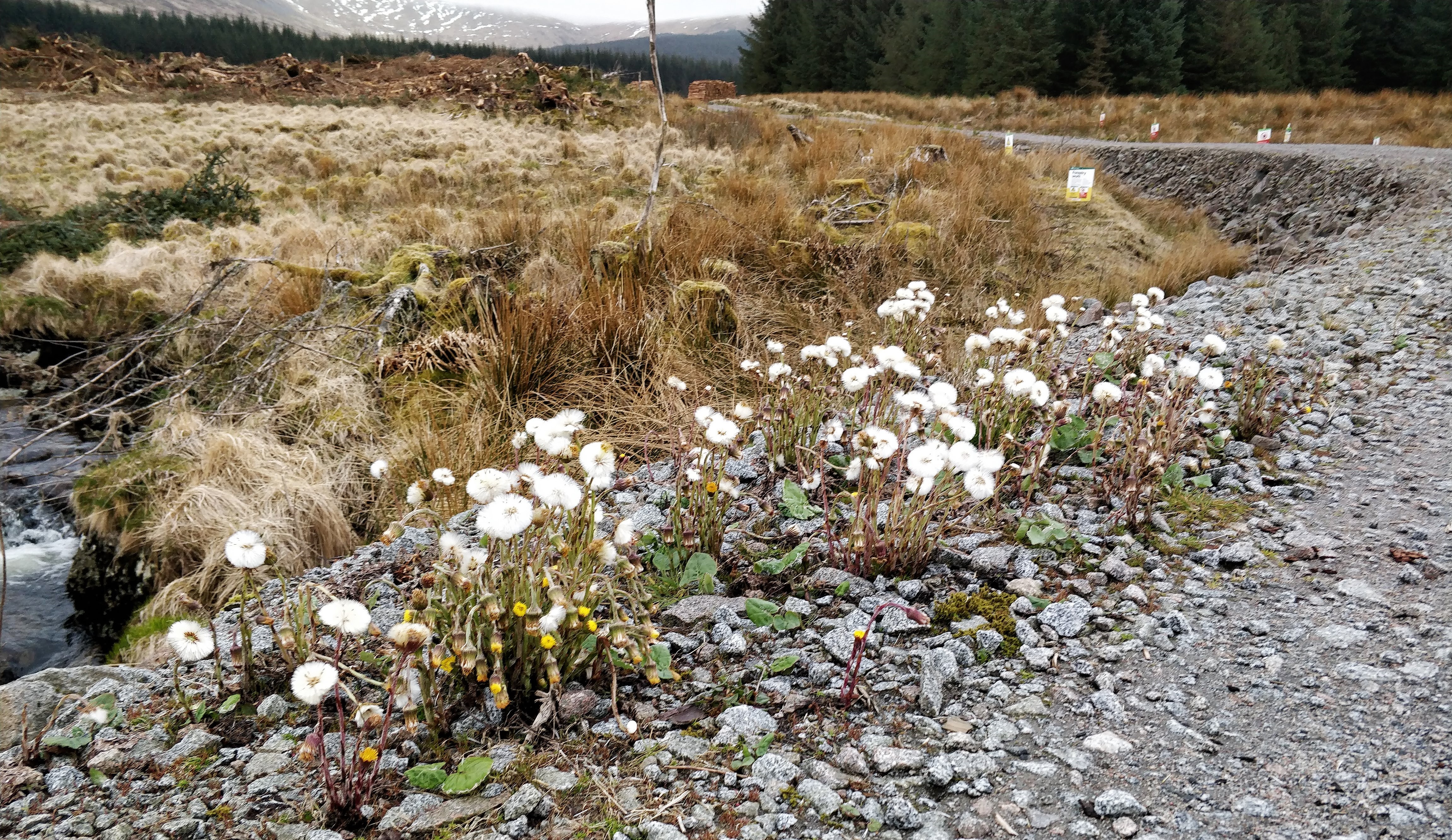 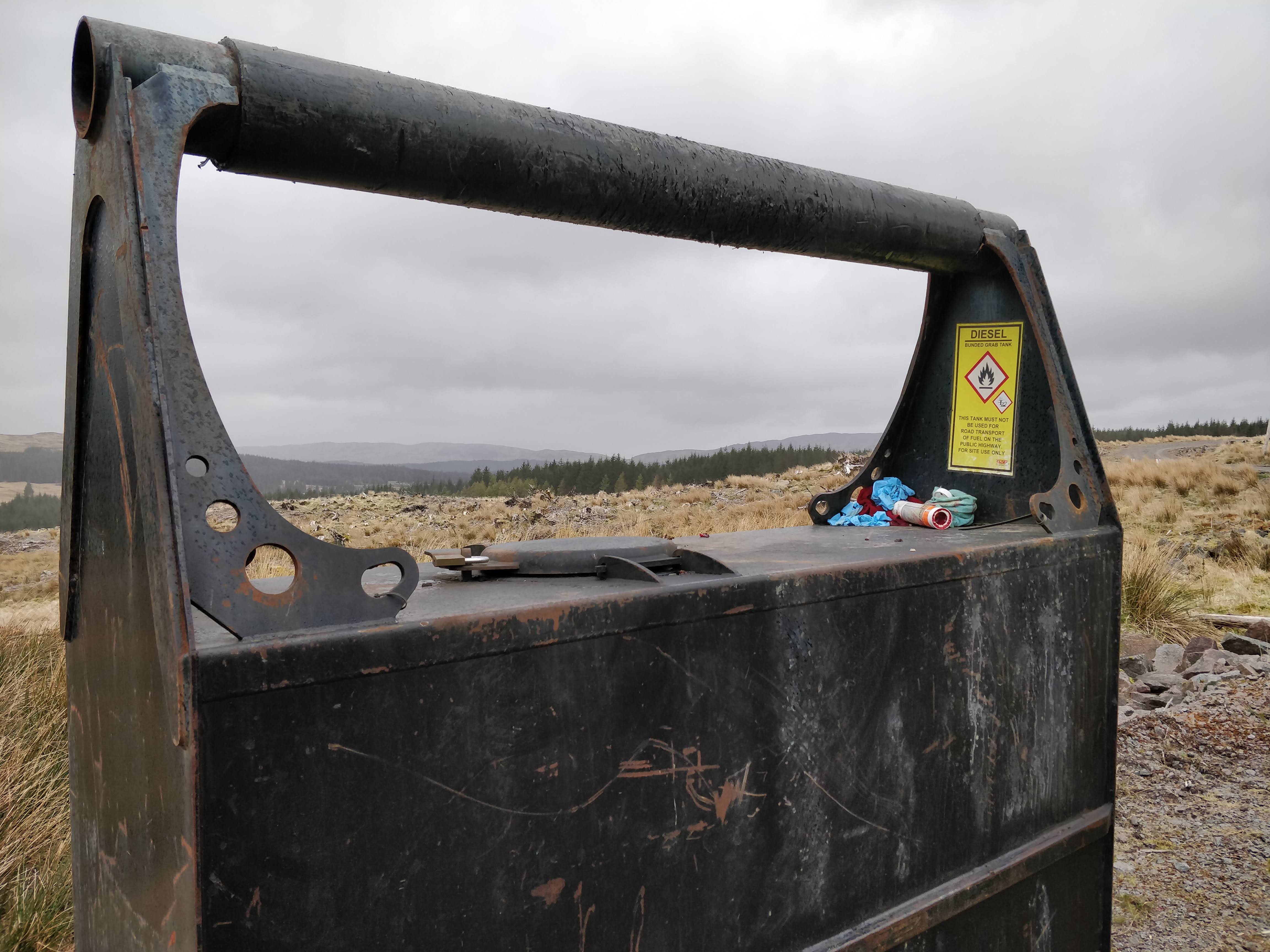 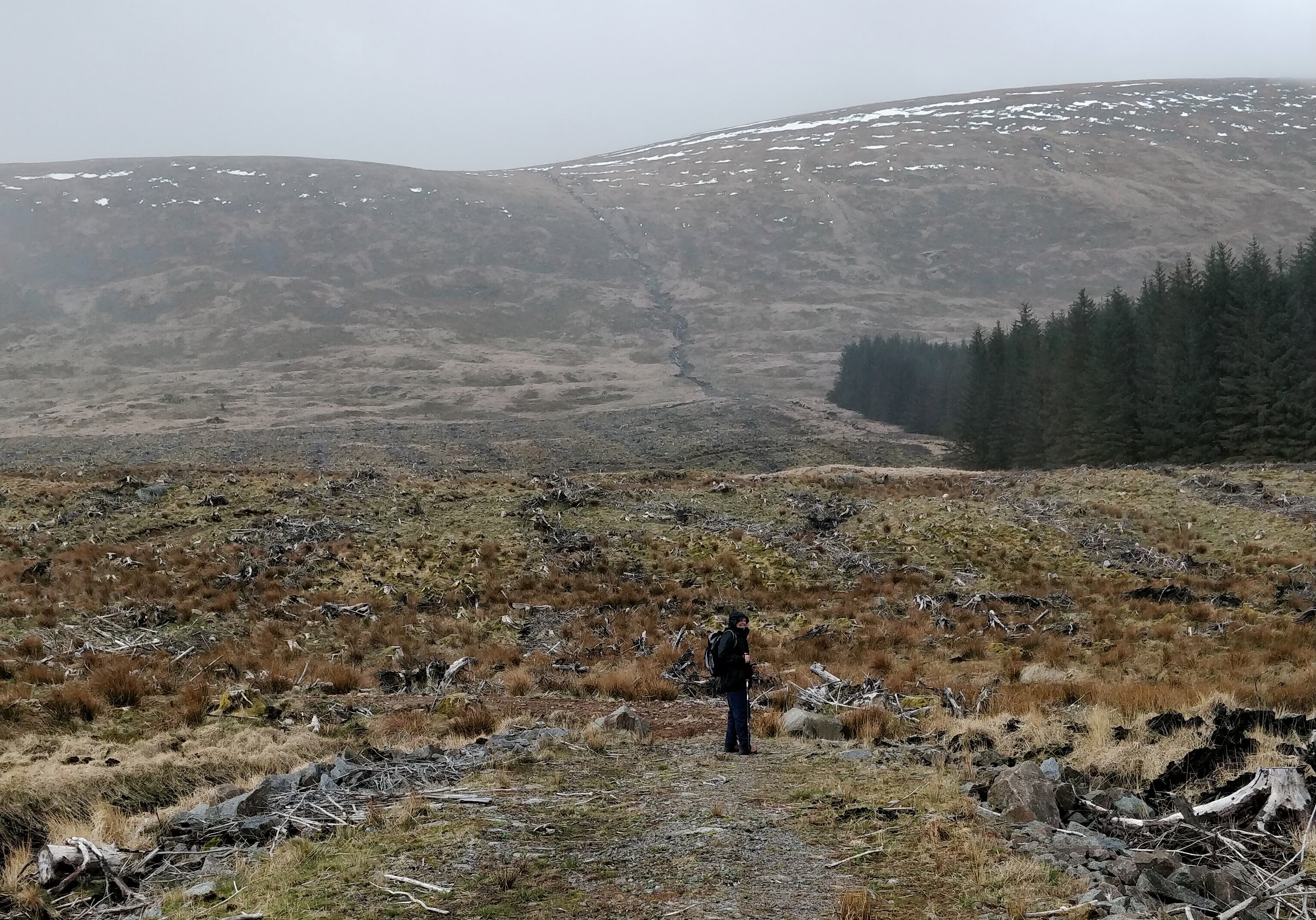 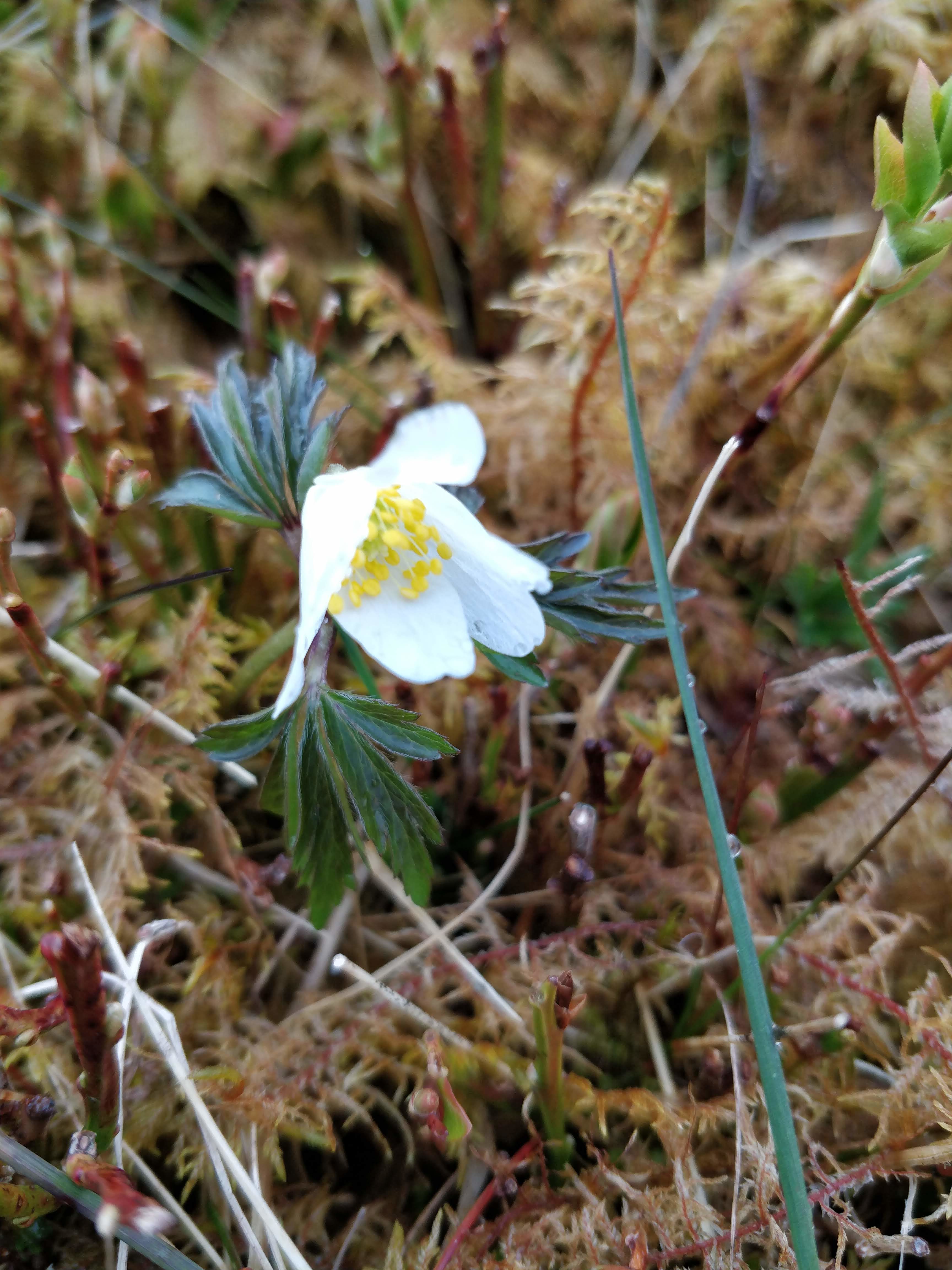 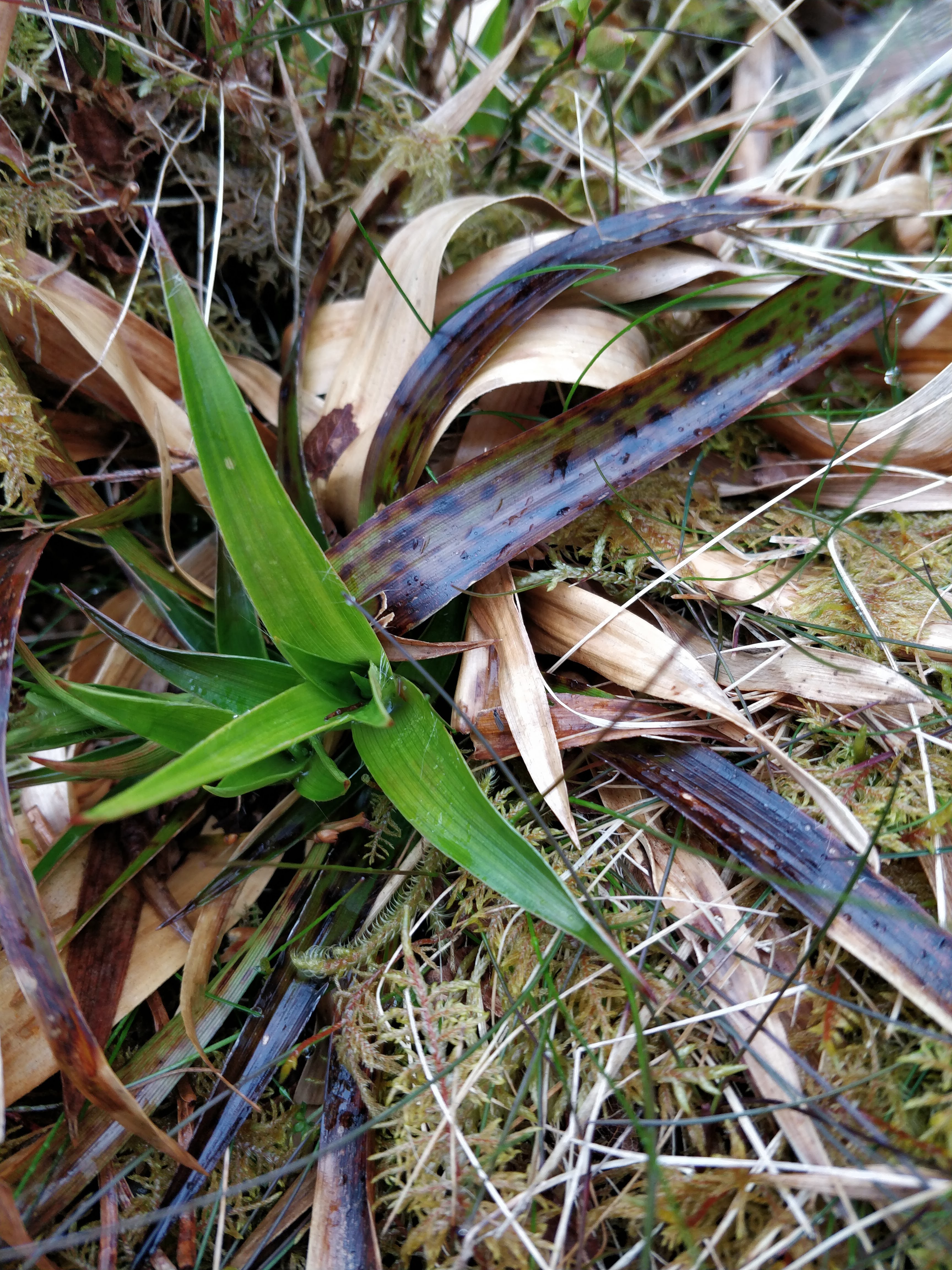 I have a book, left to me by my dad with the inscription "Specifically Emma", The Merrick and the Neighbouring Hills by J McBain, written in 1929, where he talks about three lochans on the top, between Meaul and Carlin's Cairn 'that, on account of some peculiarities, are worth considering for a moment... They are placed within a few yards of one another but have no visible connection, and they have no outlets.' McBain wondered how, when he finds them, they are sometimes two feet deep with water, sometimes bone dry, with no outlet, and not seeping into the ground. Then, one windy day, 'when I reached the lochans, I saw that the blast was lifting the water from their surface in heavy sheets of spray and carrying it down into the valley.'

I was hoping we'd see the same thing for ourselves, but we didn't. Still, in prospect of the absence of views from the top, at least his three little lochans were something to look out for when we finally made it up the steep, tussocky slope.

Meanwhile, as we rose, and before we hit the cloud, the spread below us and below Shalloch on Minnoch started to look more and more wild west prairie-like. 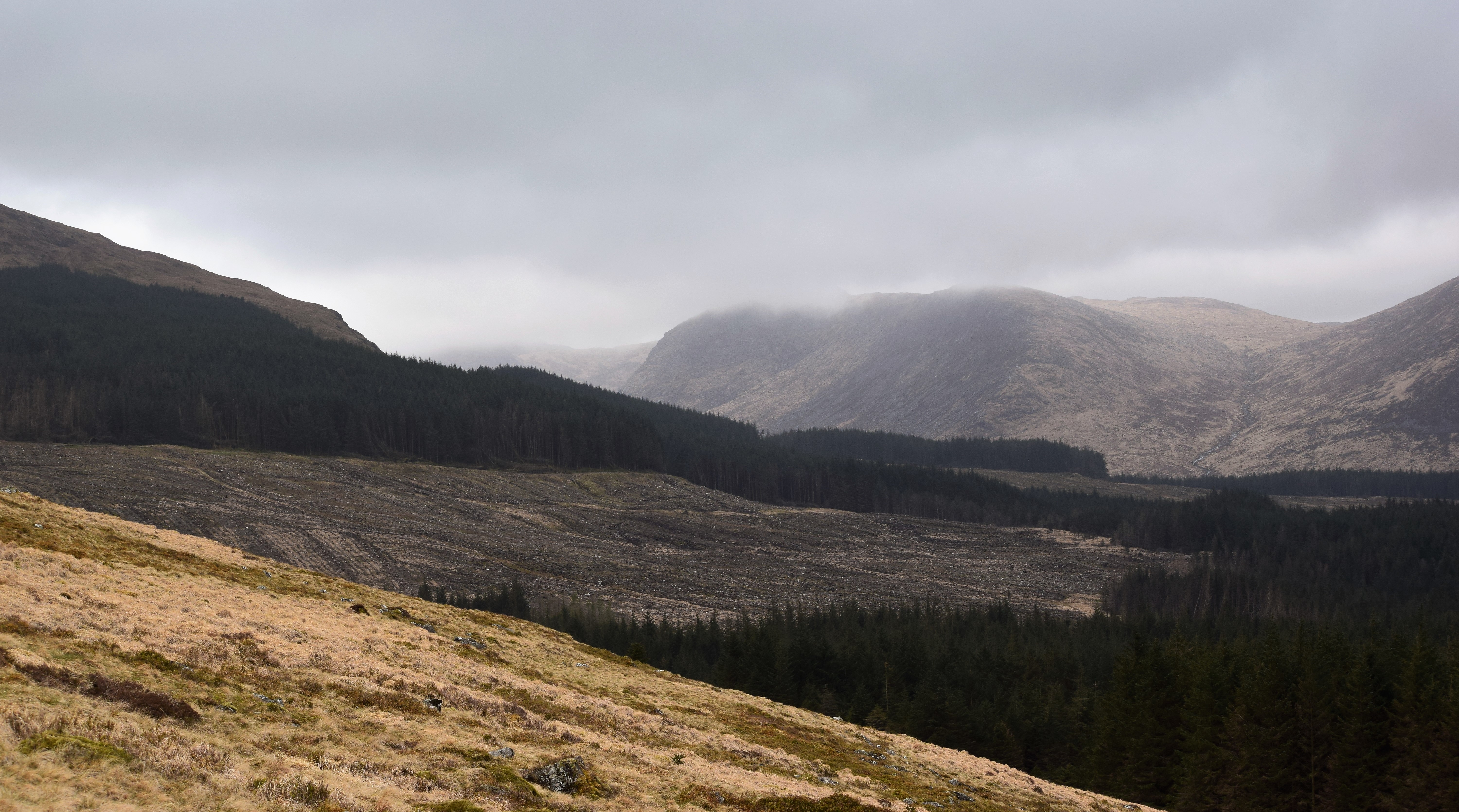 And then, on top at last, there were the writer's three lochans, today filled with their two feet of water. 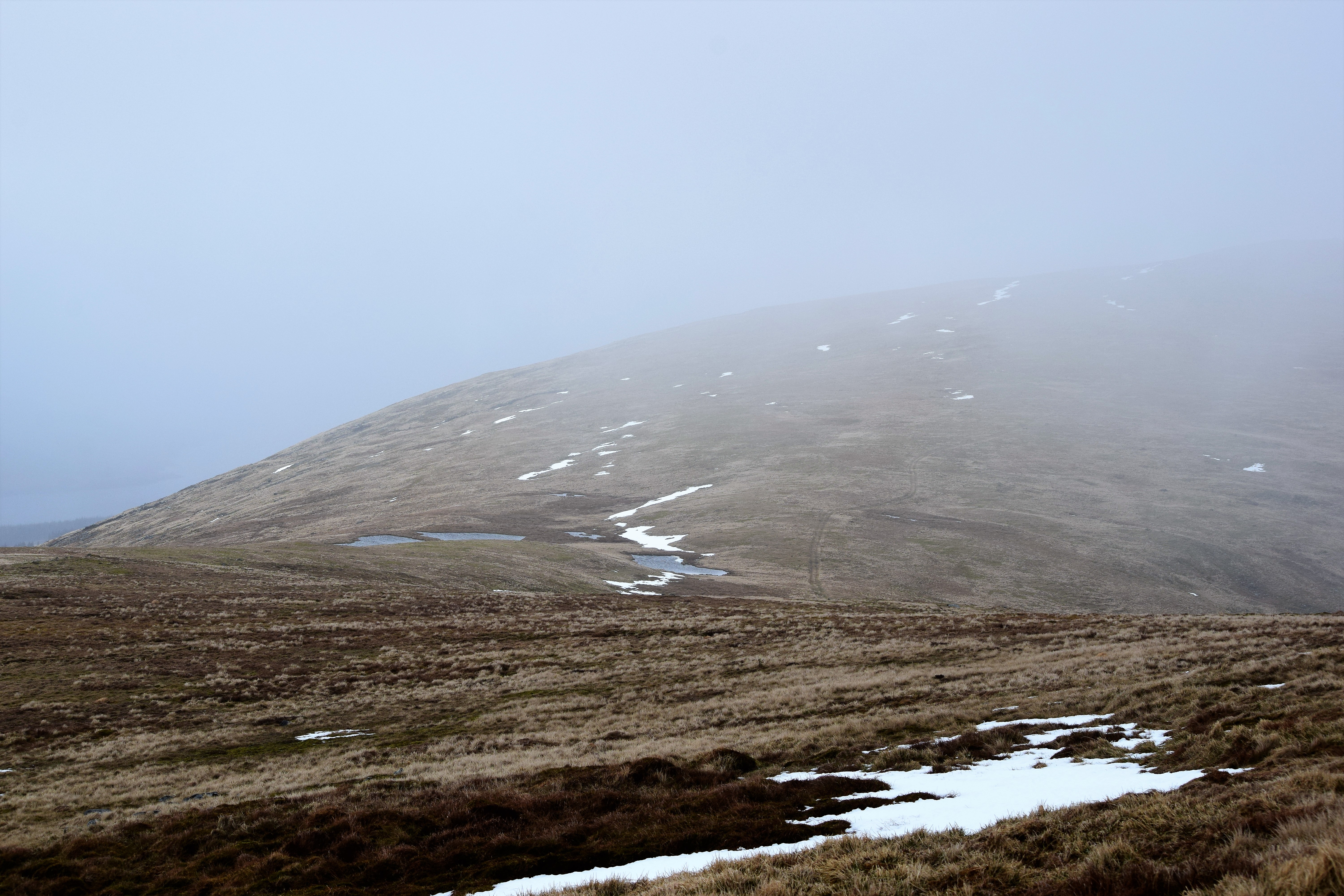 It was cold and although not windy enough for the sheets of water lifting into the valley phenomenon, at least windy enough for us to hope Carlin's Cairn was a shelter cairn! The first top, without a view of the proper top, was -needless to say - something of a disappointment

"Is that it?!", exclaimed Euan as we approached the little marker. Well, happily no - there IS more. 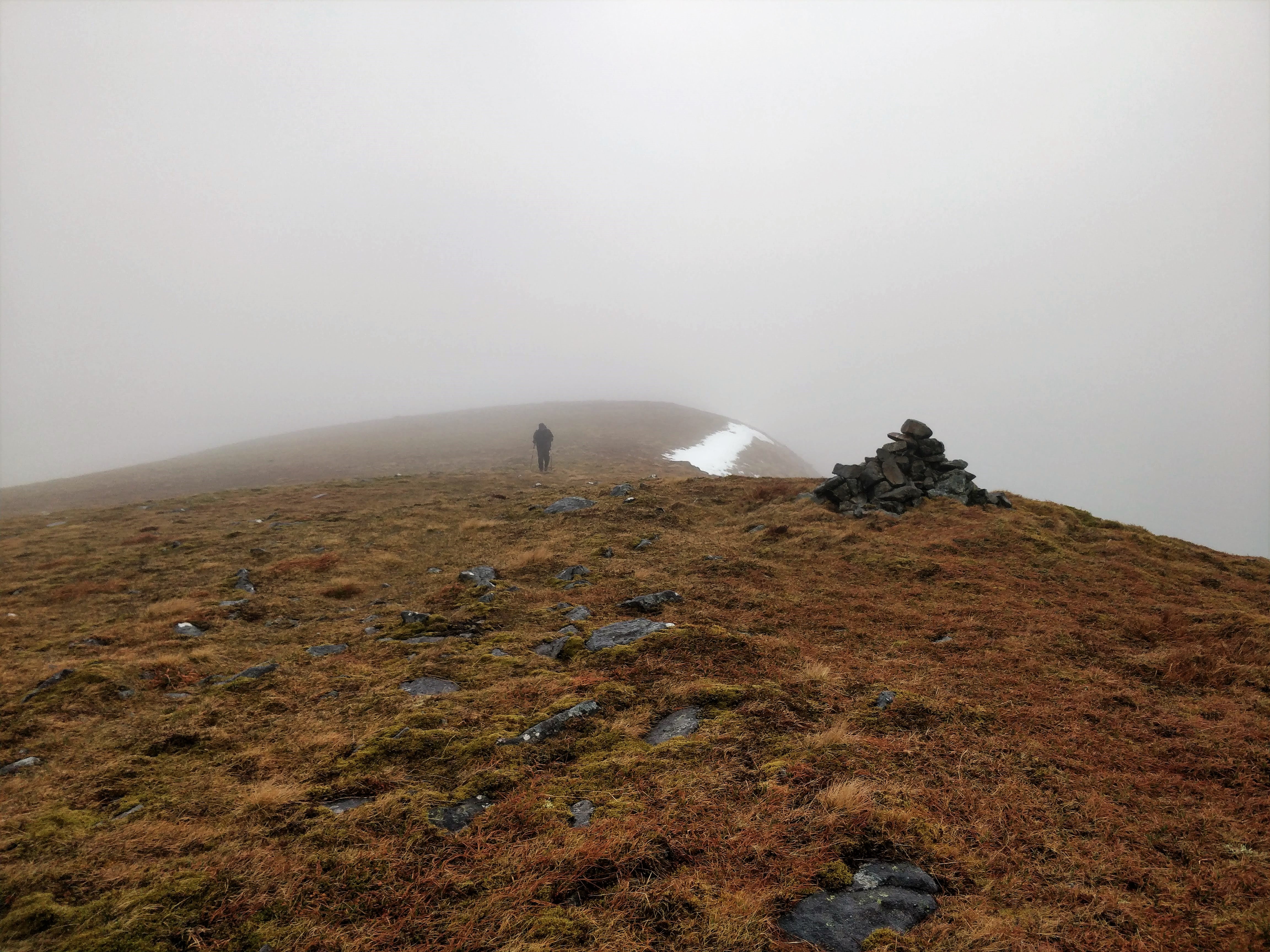 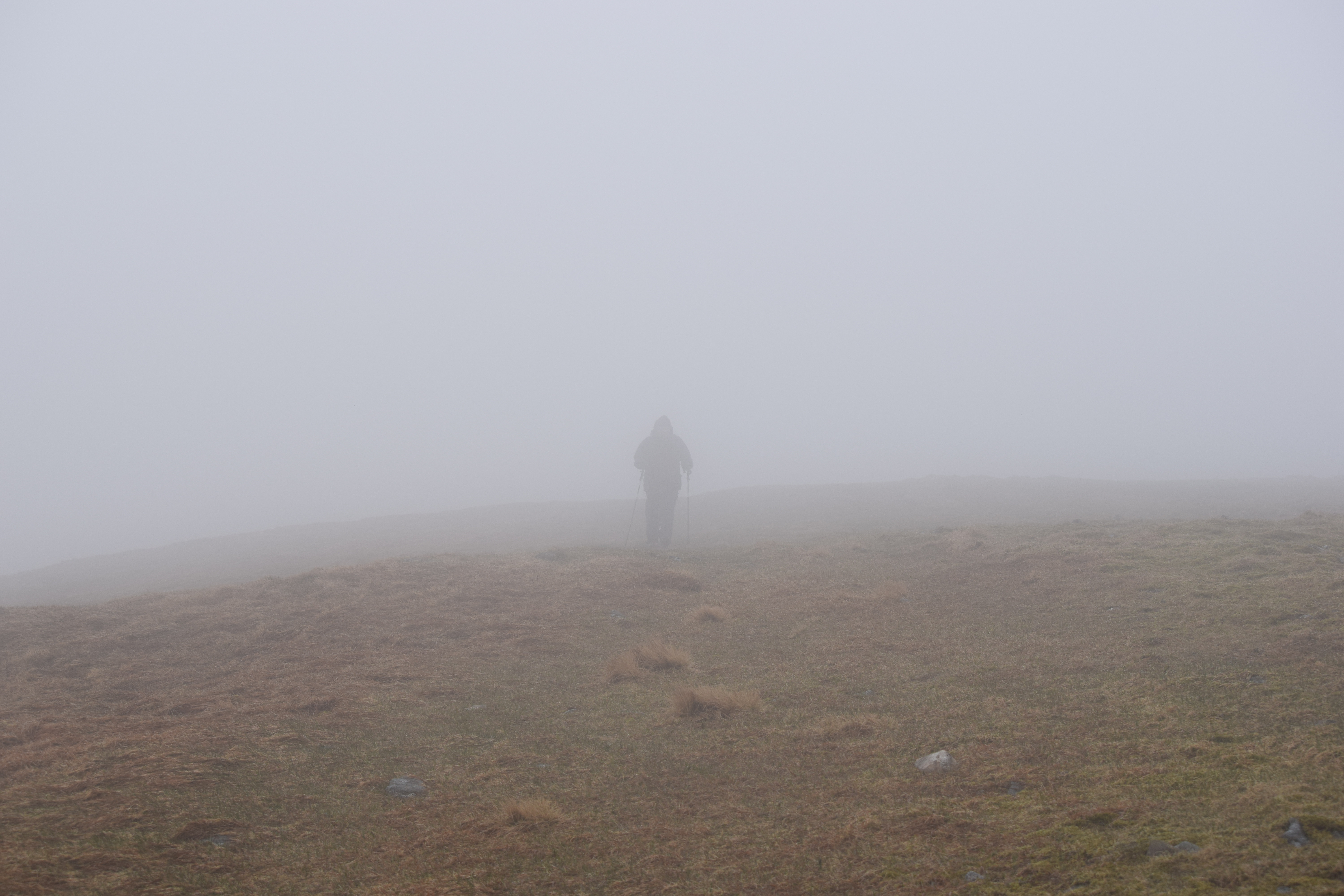 Carlin's Cairn does have the massive shelter we'd hoped for. (Here I am being the carlin - well, at least 30 years older than when we first hill-walked together 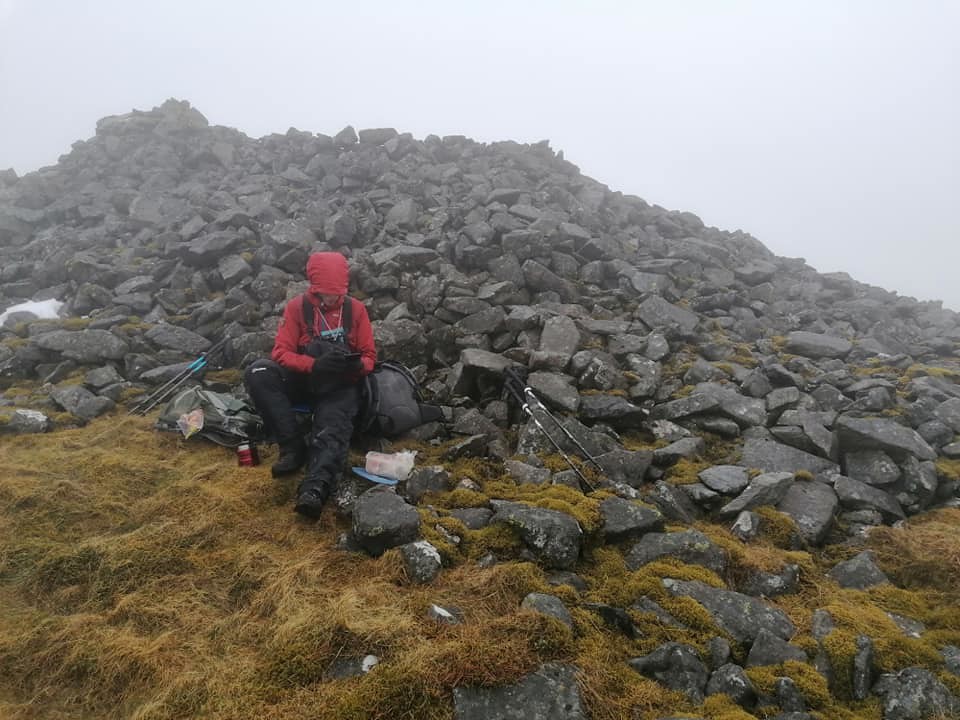 018a Me at Carlins Cairn

After a warming yum lunch of hot sweet potato and cumin soup and some nut pattie, hummus and brinjal pickle sandwiches, we staggered on in the gusty wind and icy, sideways rain to Corserine, with its fine views over the 'wild heart of Galloway' (it says here https://www.walkhighlands.co.uk/galloway/corserine.shtml 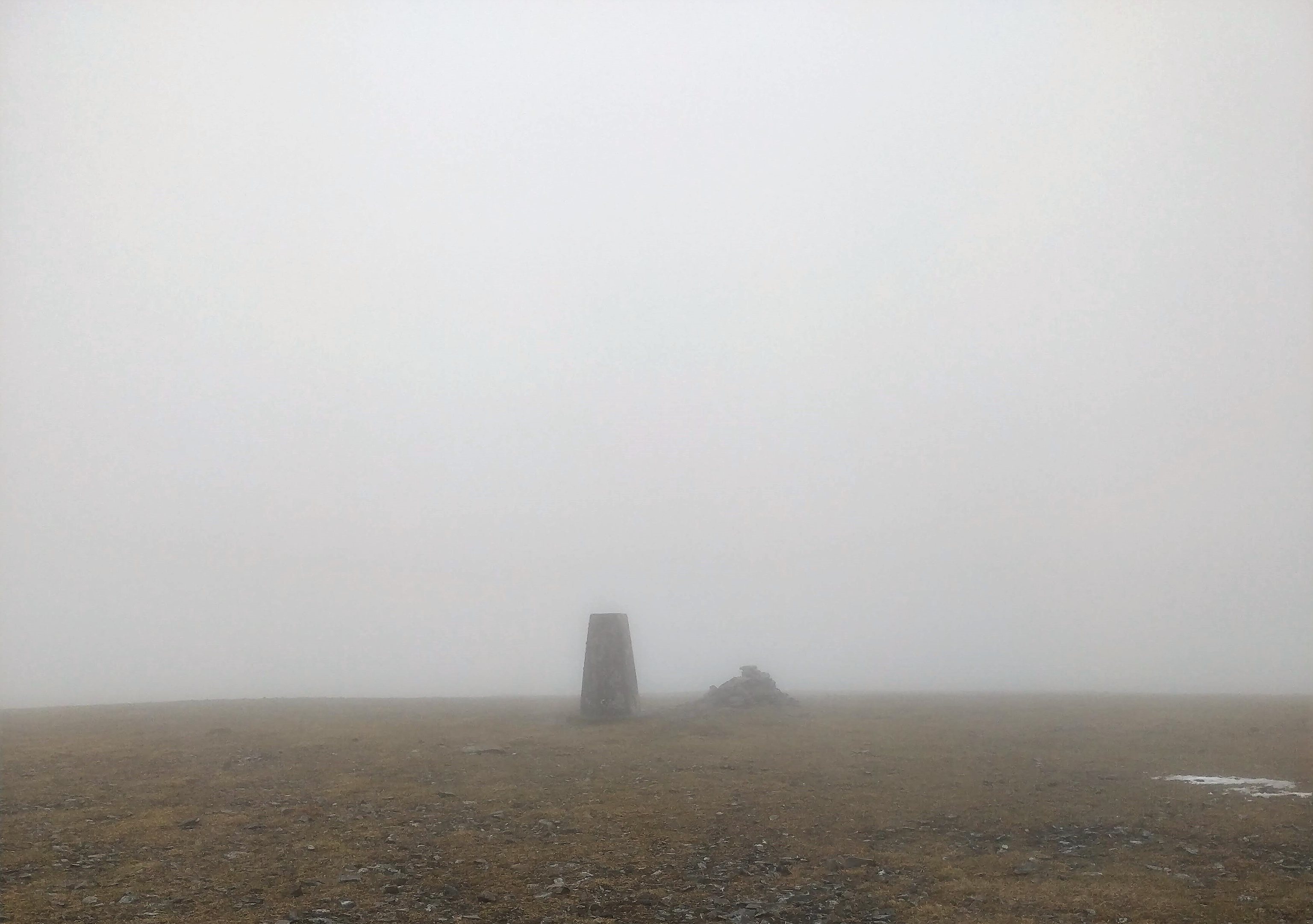 With a quick, "Shall we just **** off?" to one another, we ****ed off back the way we'd come, looking forward to that moment when we'd emerge from below the clag and what I always feel is a sensation of having your sight miraculously restored.

Back to Carlin's Cairn... 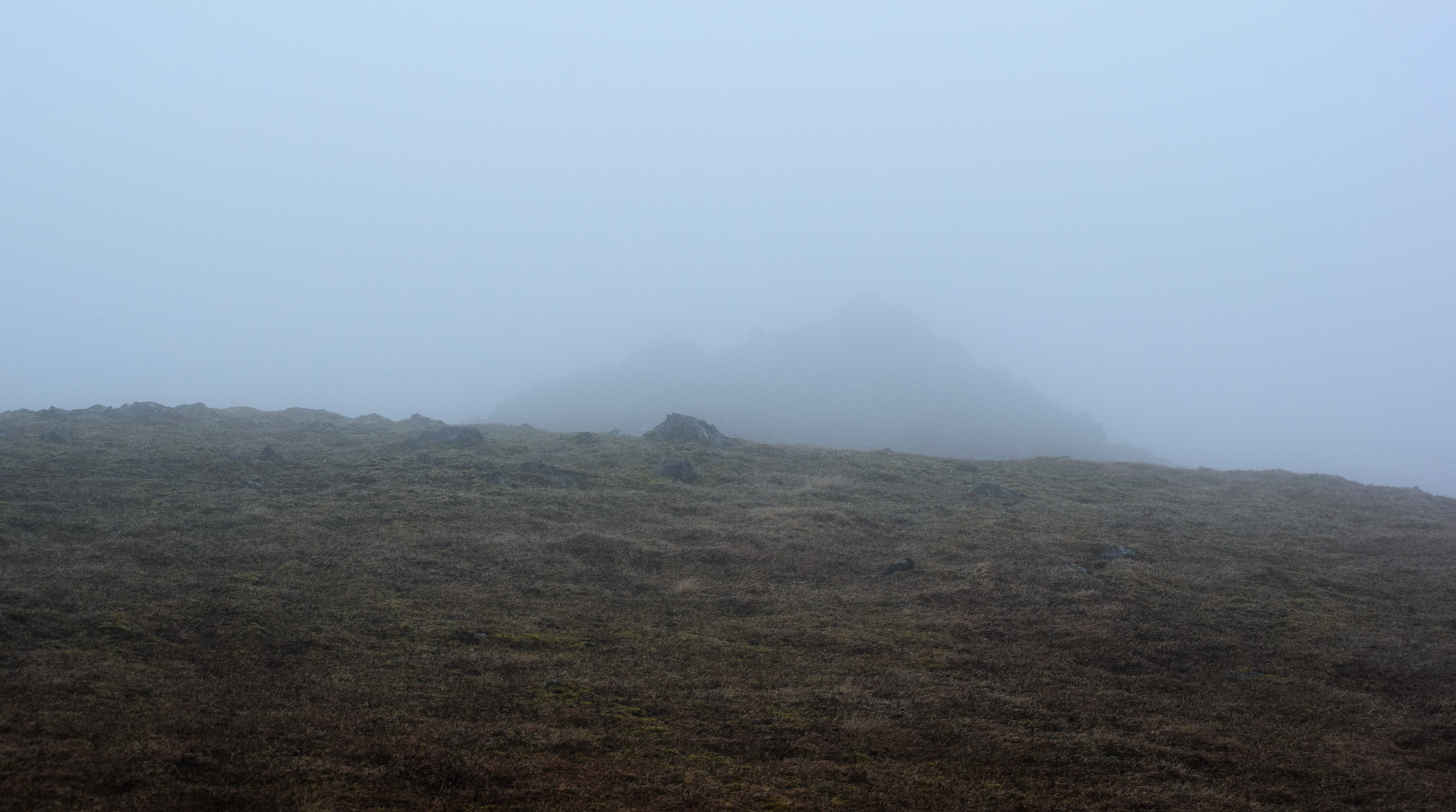 ...Euan appearing through the cloud behind me, putting me in mind of 'that' Lawrence of Arabia scene 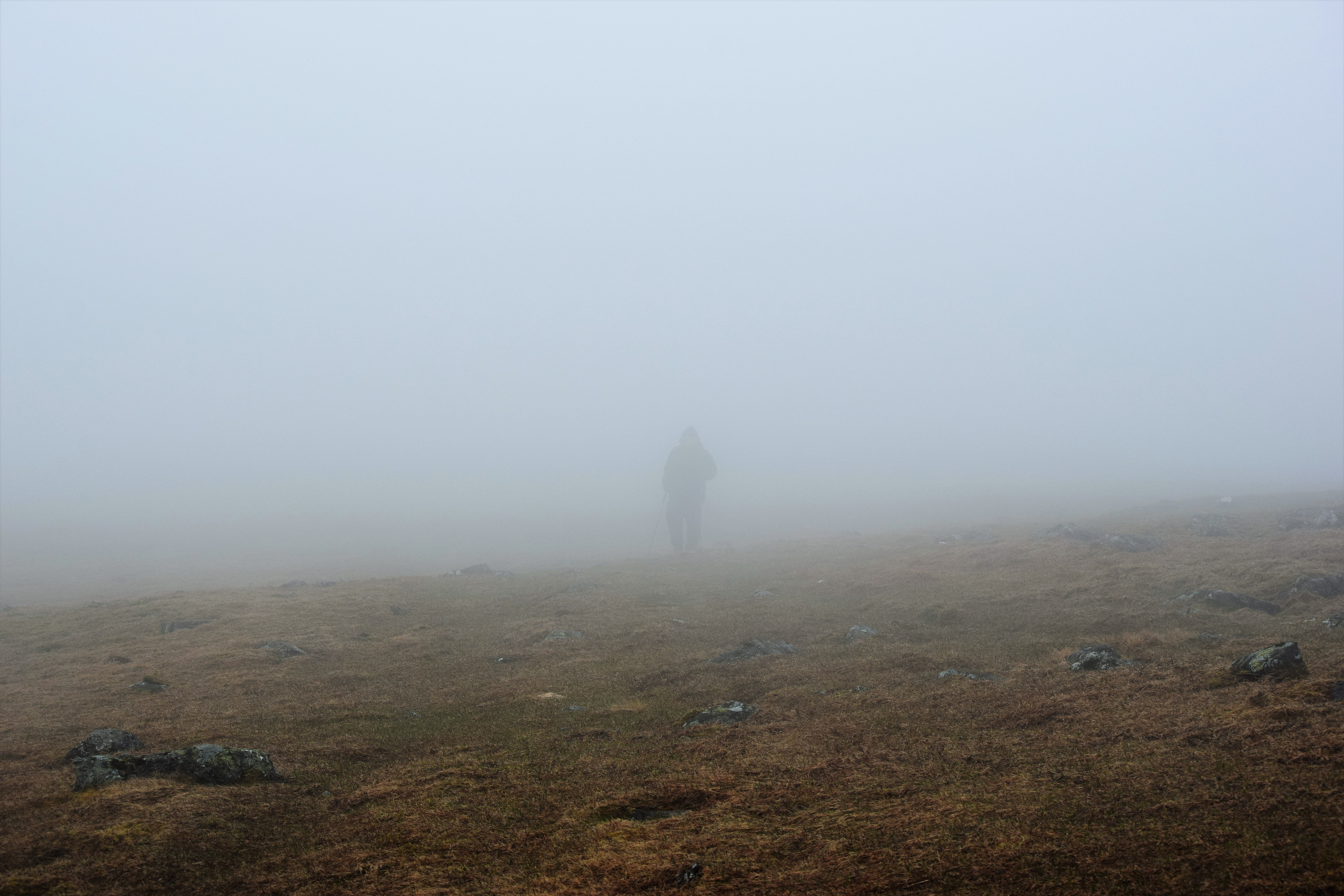 and back to our less-wind-blasted snowy patches on the way to Meaul. 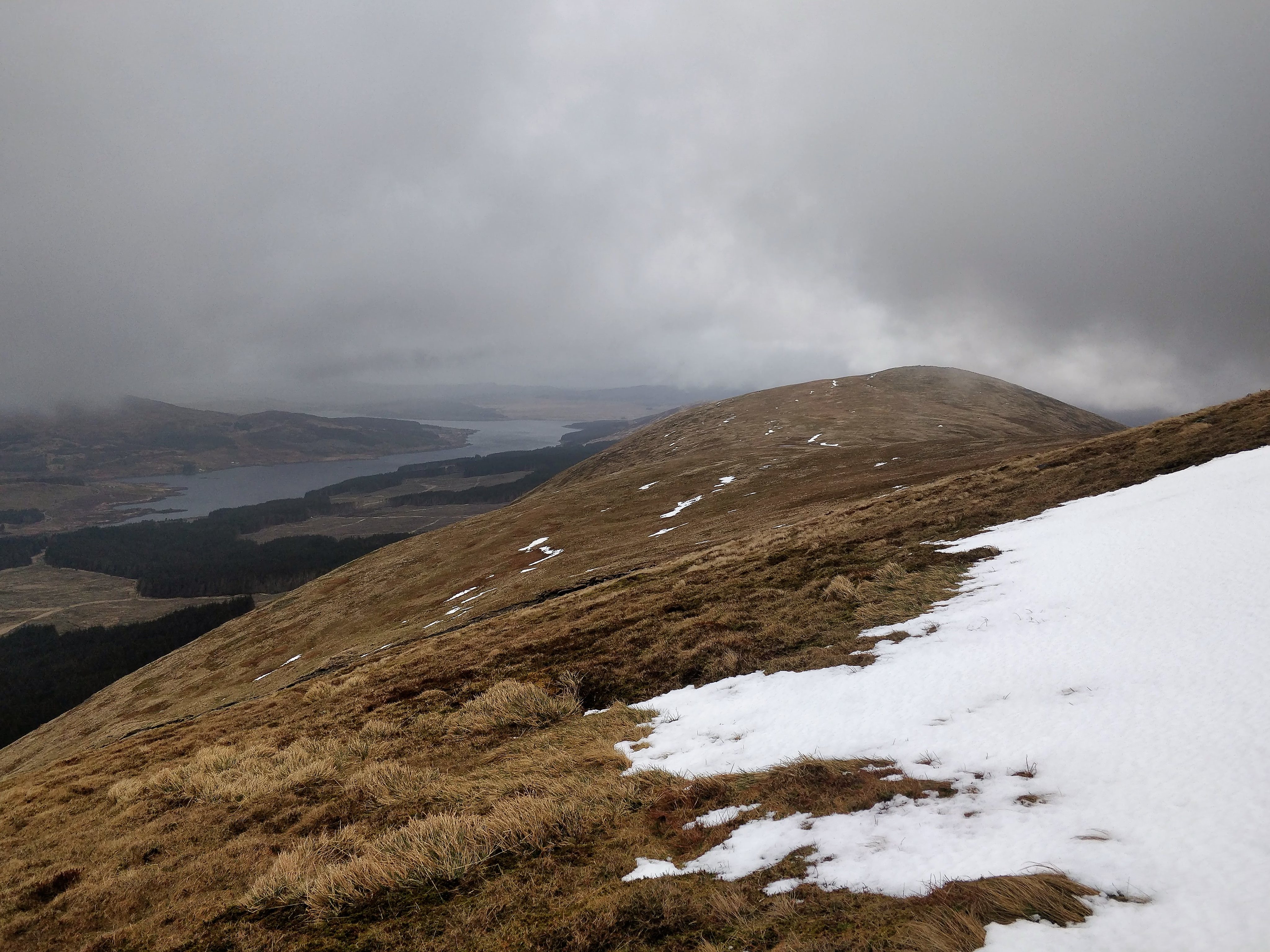 023 Meaul and Loch Doon on descent

The springy turf and moss is lovely up here, whatever the weather, and I'm looking forward to all the blaeberries being in fruit. 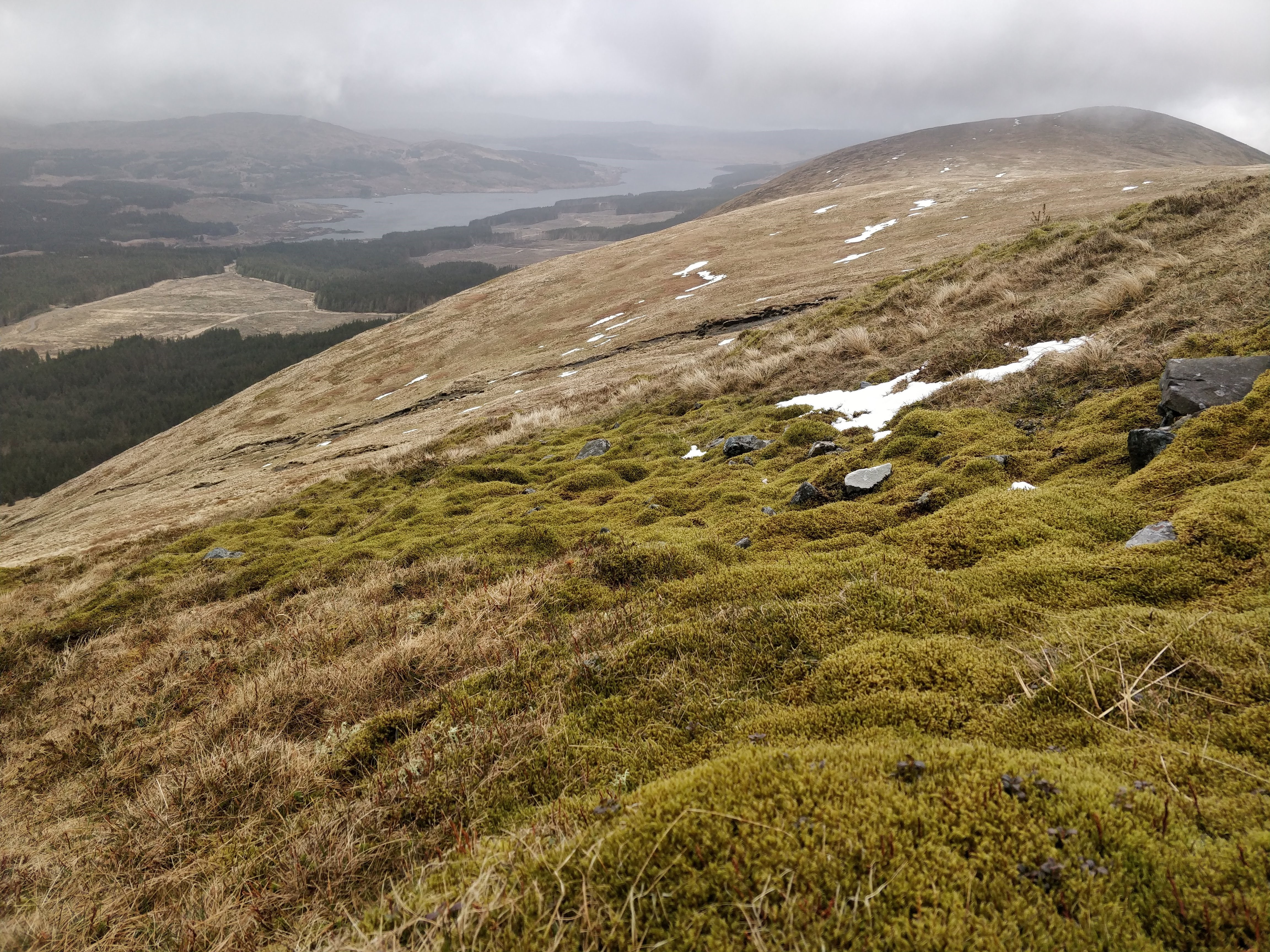 023a Moss on Rhinns of Kells 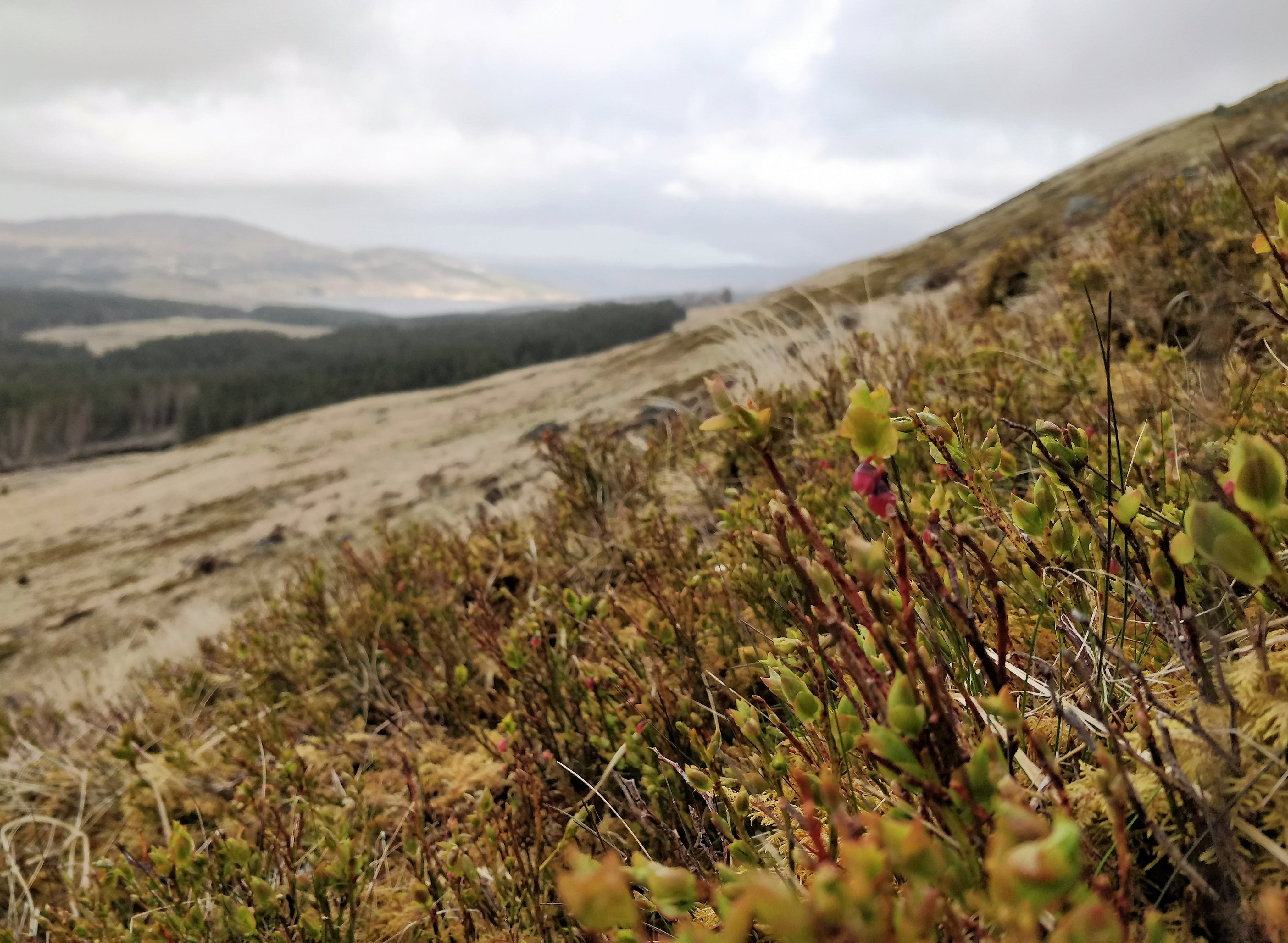 Euan's knee is giving him jip, so while I waited for him to wince his determined way back down the steepening slope, it was a delight to look over to Tarfessock and Shalloch on Minnoch... 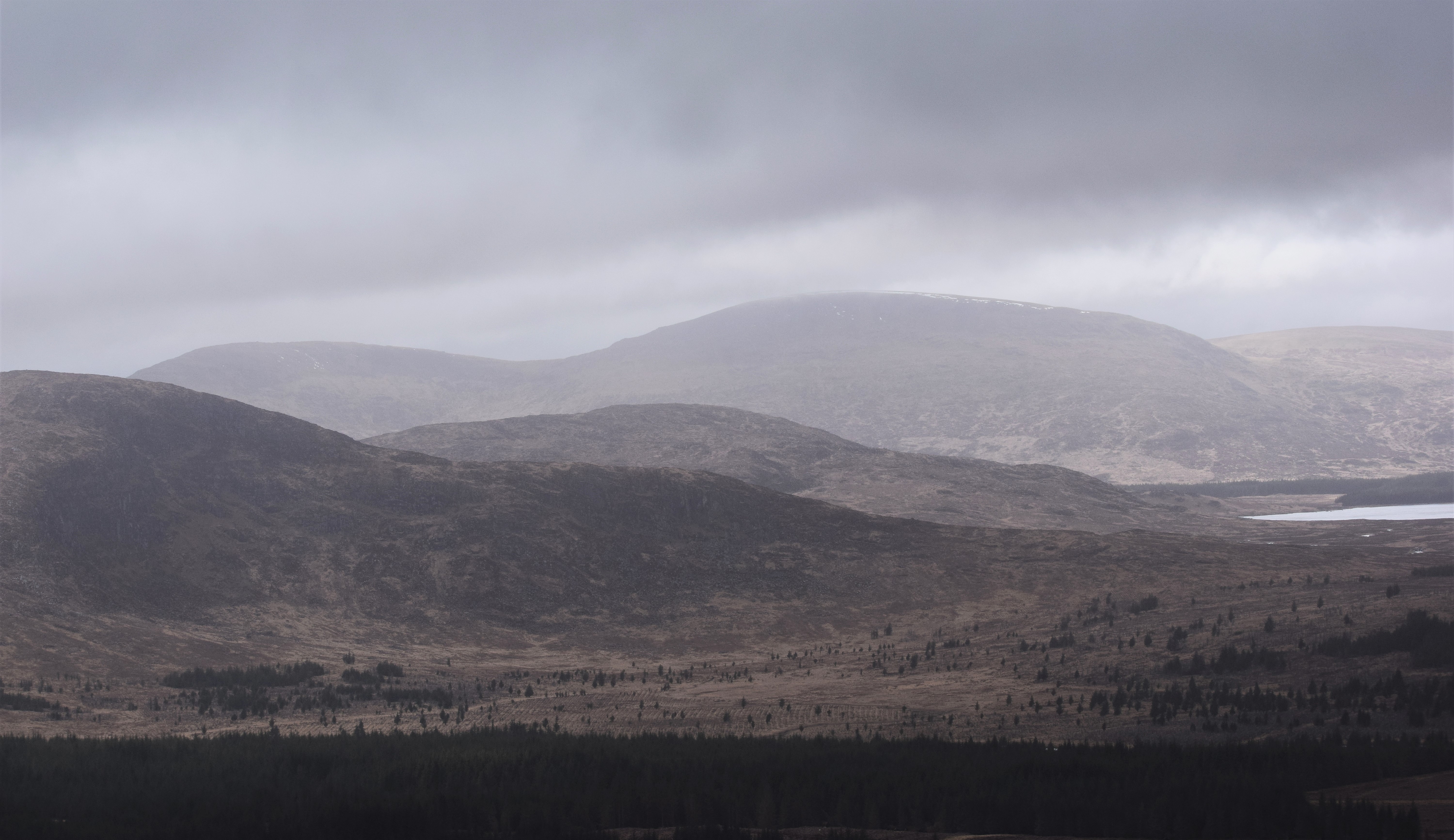 ... and remember my eventful 21st (no roof on Tunskeen bothy - and in those days, happily, no mobile phone option to abandon ship and call for a lift home). 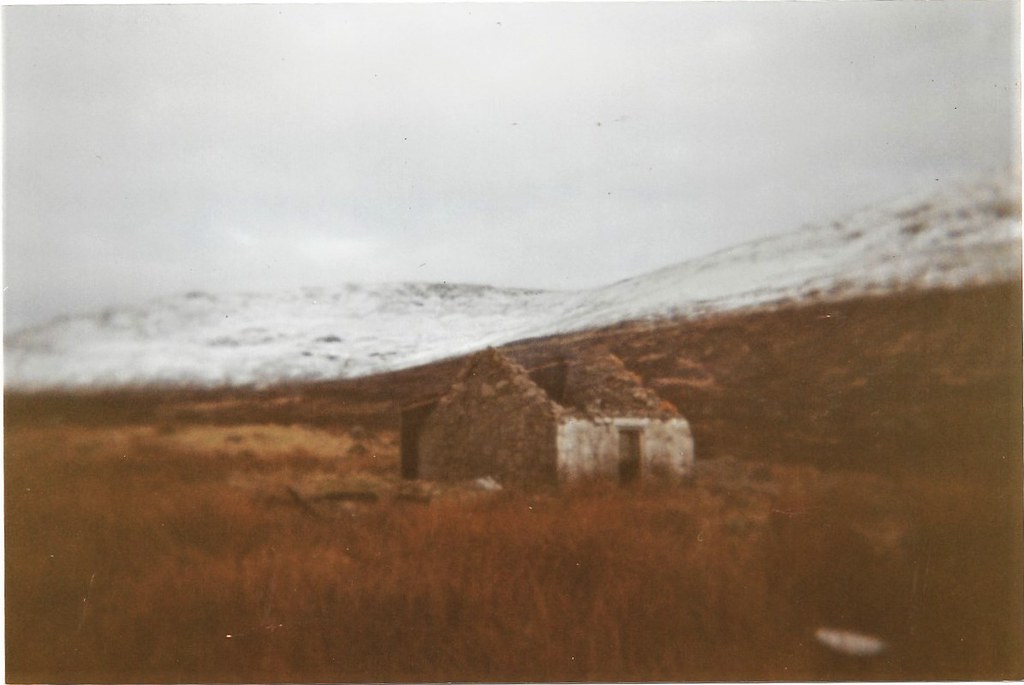 009 Piece de resistance - in the gloamin 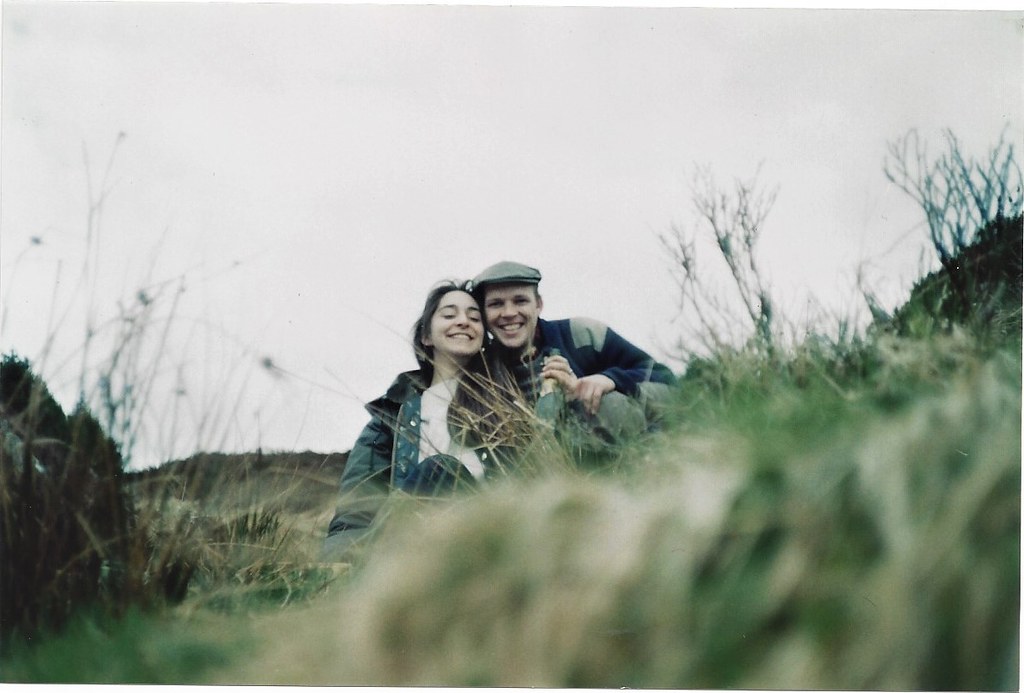 Reminiscences indulged in, down we went, and as we walked back along the tracks, we looked back to see the tops now clear

Then it was back to Loch Doon... 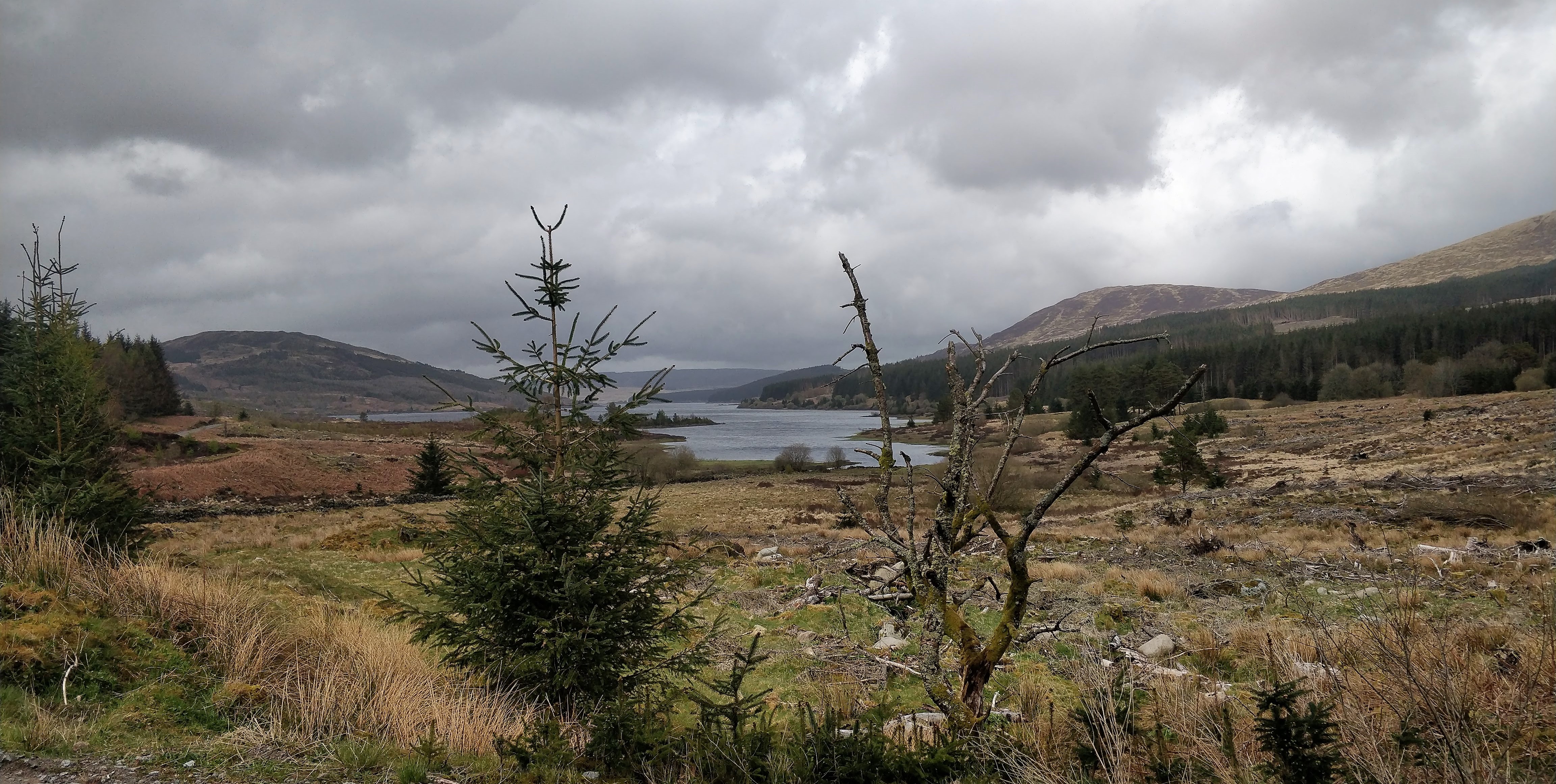 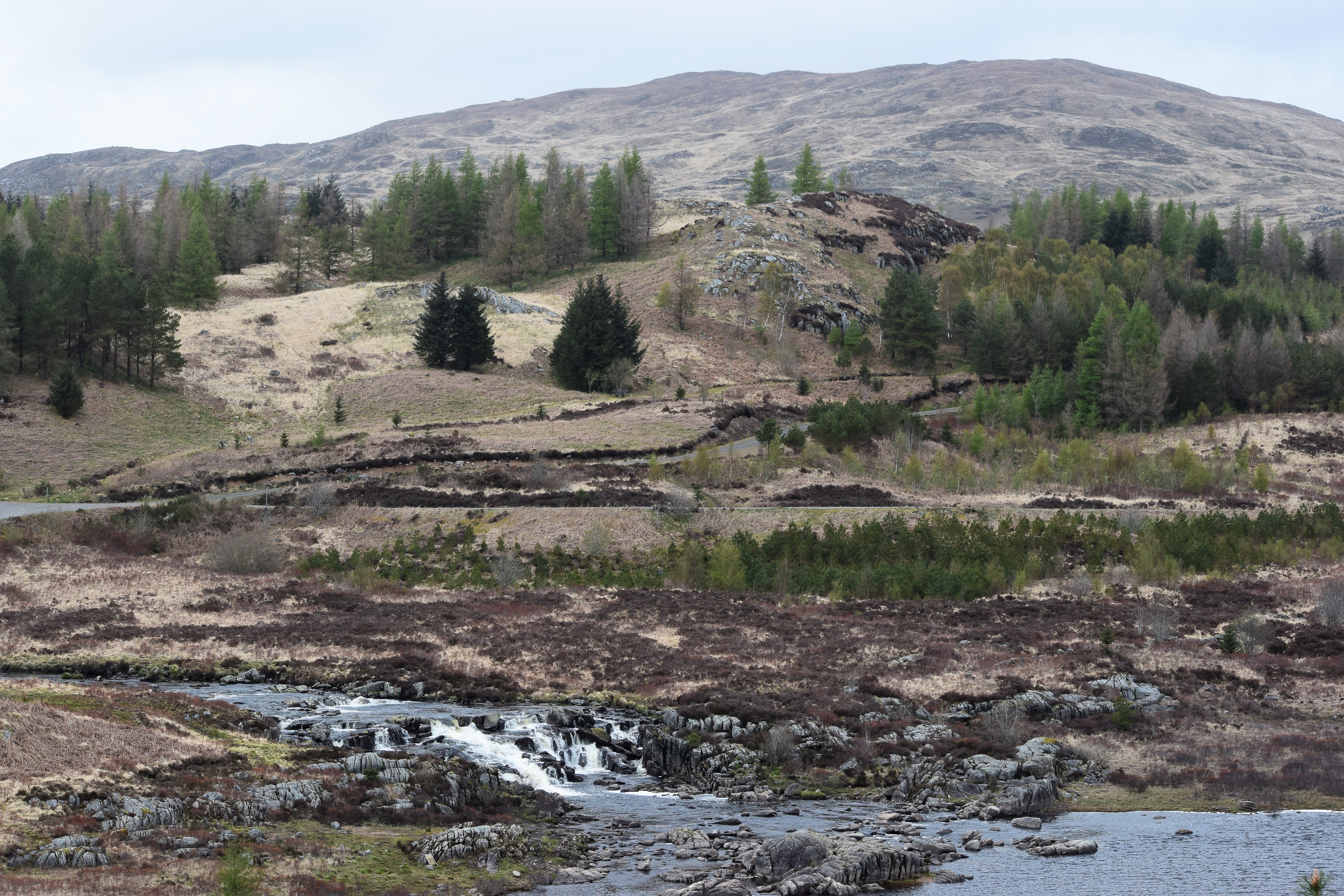 ... and home for a zoom with pals in Sussex, to share our day's contrasting wanders.
Click to mark this as a great report. Register or Login free to be able to rate and comment on reports (as well as access 1:25000 mapping).

Waun Fach and some gory history