How I've got it in my head that I walked Suilven in c.1990 I don't know, but I have such a vivid memory of leaning against the wall at the bealach and springing up for a peek at the view every time the cloud cleared, that I must have dreamt it, or read it.

Anyway, my long-lost, lately re-found partner assures me we didn't walk it back then but he really wanted to now. So when an opportunity presented itself this summer, we grabbed it.

It was early as we headed along the A837 to Lochinver, and we were treated to a pine marten crossing the road in front of us, and a little owl taking off from a post. So that boded well for the day, we hoped!

At the layby just before Canisp Lodge, where I was last here volunteering for CALL (Coigach and Assynt Living Landscapes) before Covid, we donned midge jackets and booted up. Now, I love my midge jacket when I'm pitching a tent or reading on an Assynt beach, but I've not walked in it before - and I won't ever again. Somehow it left me with bruises on the clavicles!

Still, it was a pleasure to take in the breathtaking, other-worldly, awe-inspiring view without being eaten alive.

005 Canisp and Suilven SE from road

The forecast was for humidity and relative clarity to start with, and then potentially heavy rain in the afternoon, so we were making our start at about 6.30am. That meant we had the long walk in pretty much to ourselves, in spite of it being the popular route. There to greet us was this fine, long specimen of a slow worm, trying to soak up what morning rays there were. 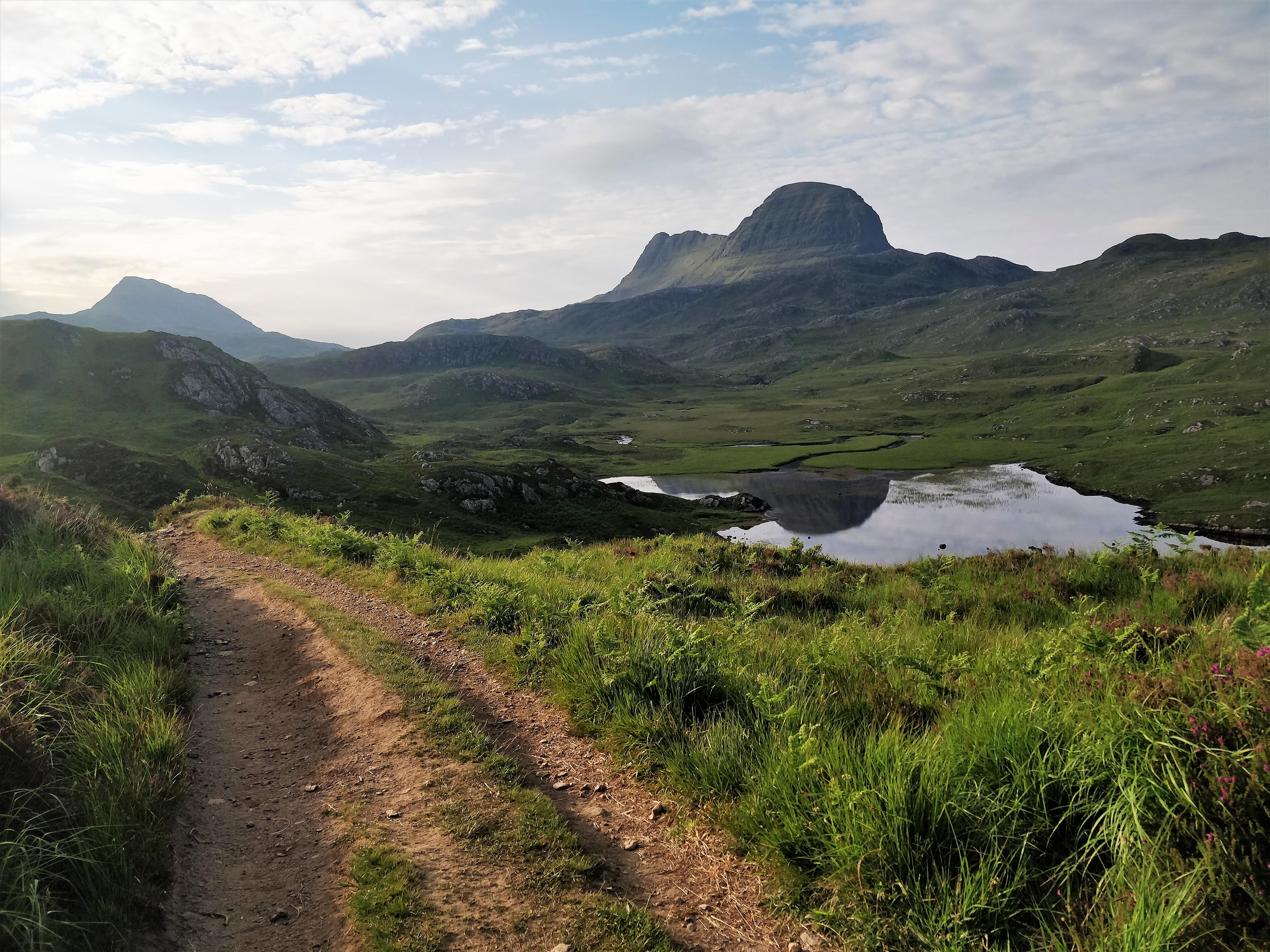 010 Canisp and Suilven on beautiful morning

I've mentioned on the wildlife forum this lesser butterfly orchid (below), which I think was a new one for me. On that thread (https://www.walkhighlands.co.uk/Forum/viewtopic.php?f=3&t=107434), Skyelines and Mal Grey have posted some much better, beautiful photos. (I was probably swatting away a midge when I tried to take mine! )

As we walked we could hear the evocative, eerie calls of divers coming from the lochans in the glen, and then we saw them fly over at a distance. Very, very gradually, Suilven got closer. 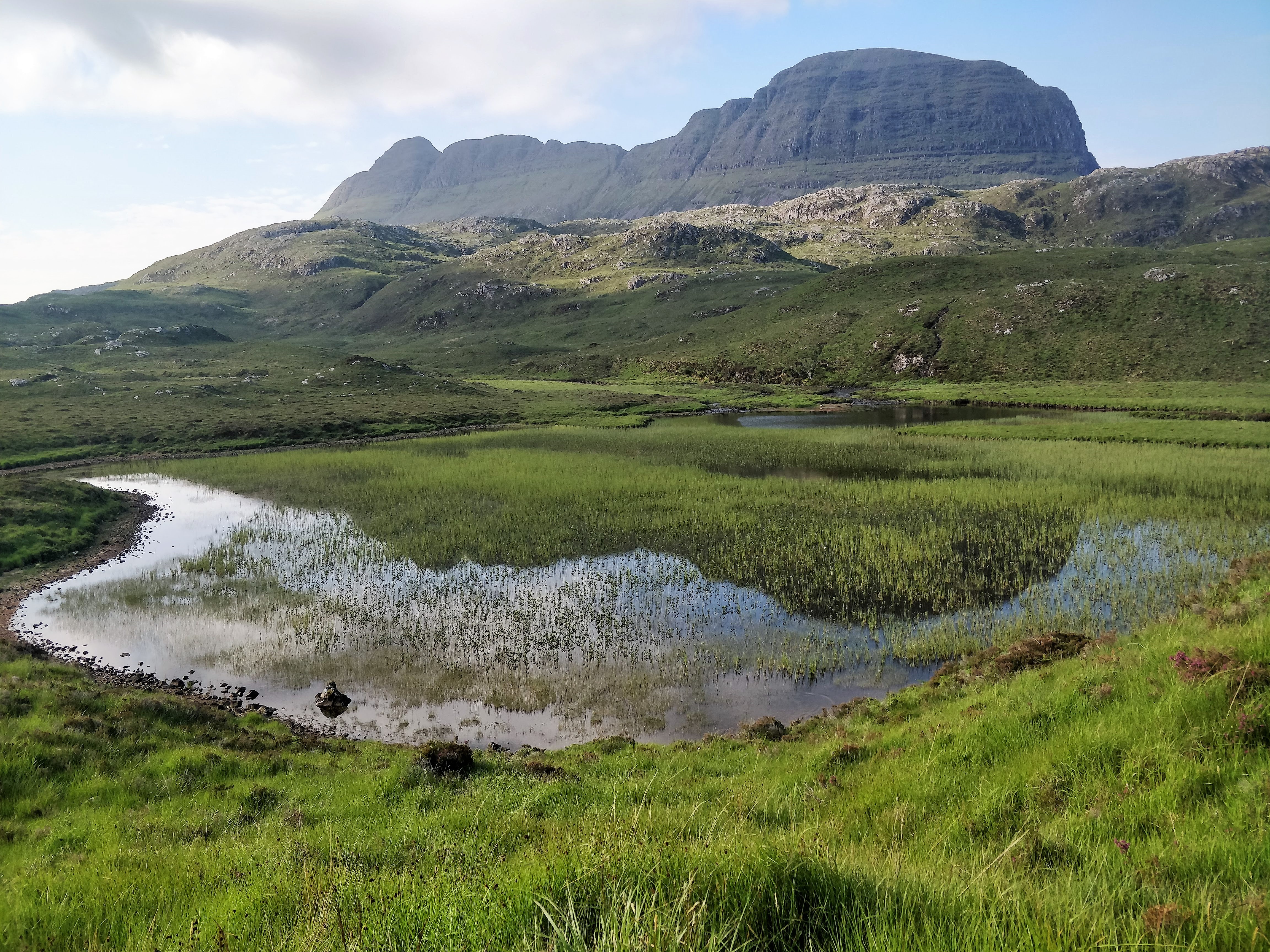 On this whole walk in, you don't really take your eyes off Suilven except when the ground undulates a little and Canisp reminds you it's here too, y'know. I also had my eye out for Ben More Assynt and Conival, since I thought - wrongly - you wouldn't see them from the top of Suilven, but might see them from the earlyish section of the walk-in. But the land to your left undulates too much, so you don't. 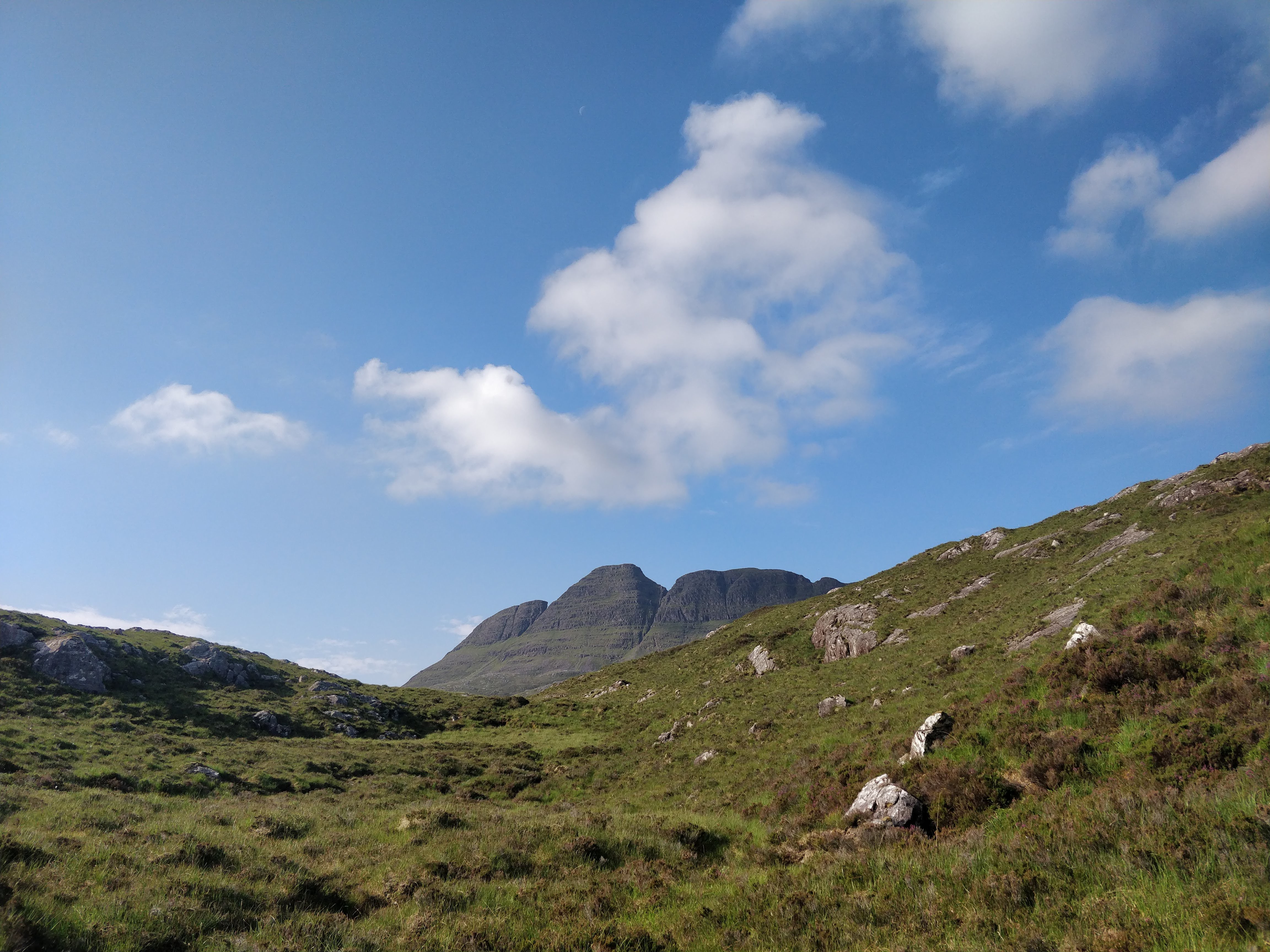 After a few miles, a couple of girls caught up with us, chatted, asked - a bit longingly - about the midge jacket and went on ahead. By the time we turned southwest to start the ascent, they were still the only people we'd seen. I had wondered though, because of the cars parked near the Lodge, whether there had been any summit campers the night before. It would have been a cracking night for it. 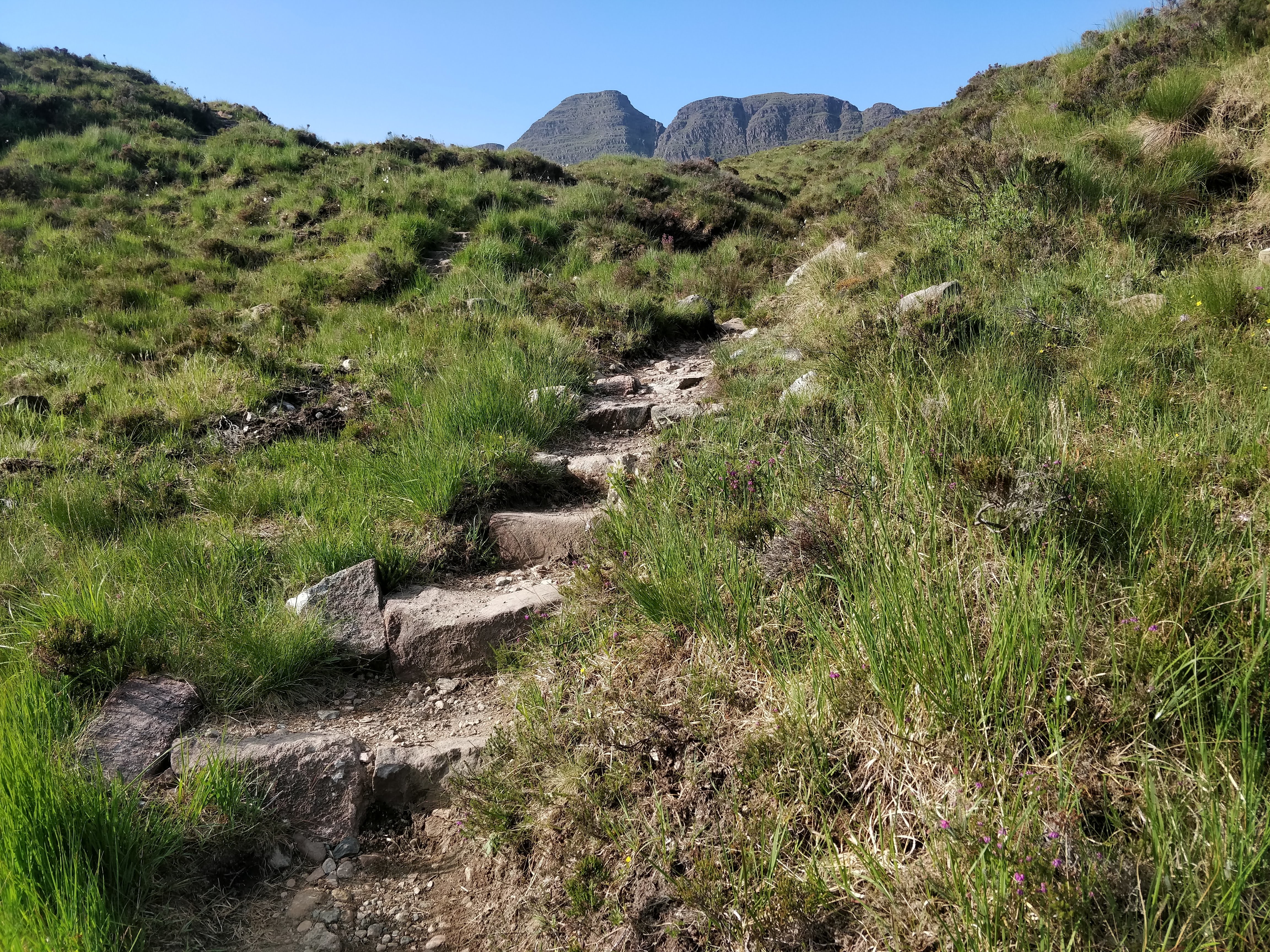 015 Off Canisp path on to Suilven one 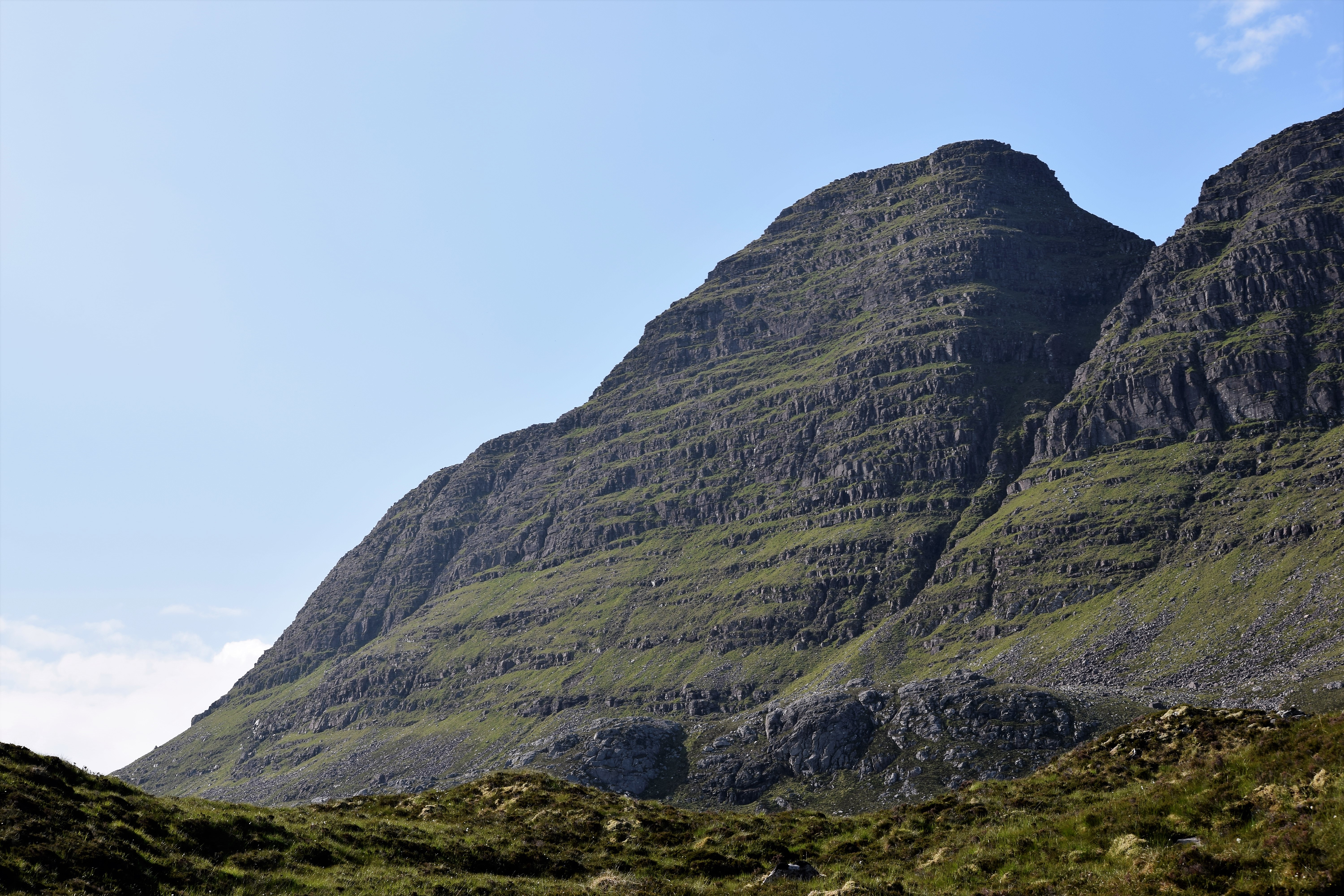 As we began to rise, Quinag appeared behind us, dominating the view east: 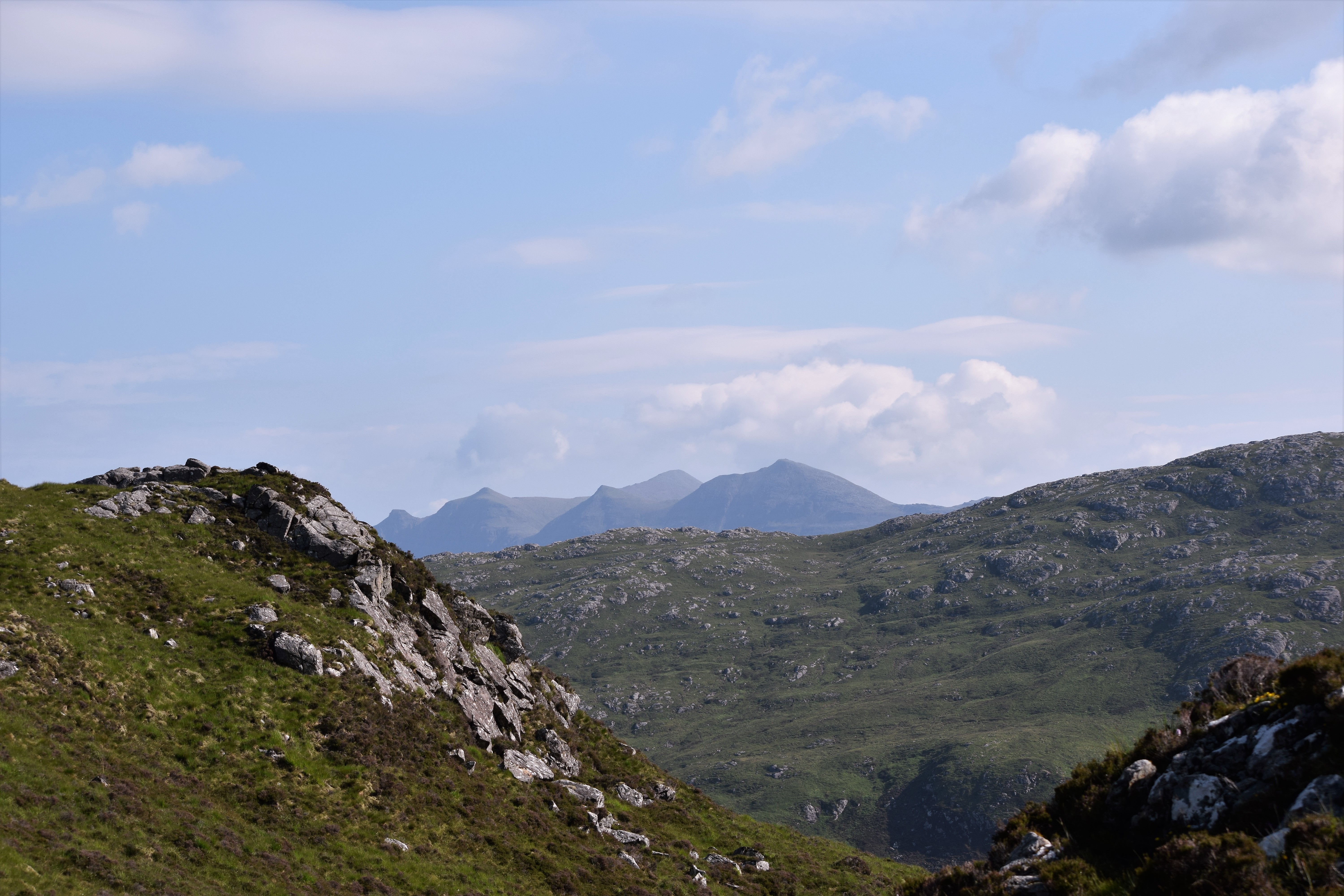 Then, at Loch a' Choire Dubh, we met a couple looking very cheerful indeed after their summit camp and the beautiful sunset they'd enjoyed. It was a happy sunny day on Suilven! Especially when there was enough breeze to dispel the midges - this couple too were eyeing the midge jacket and asking about it... 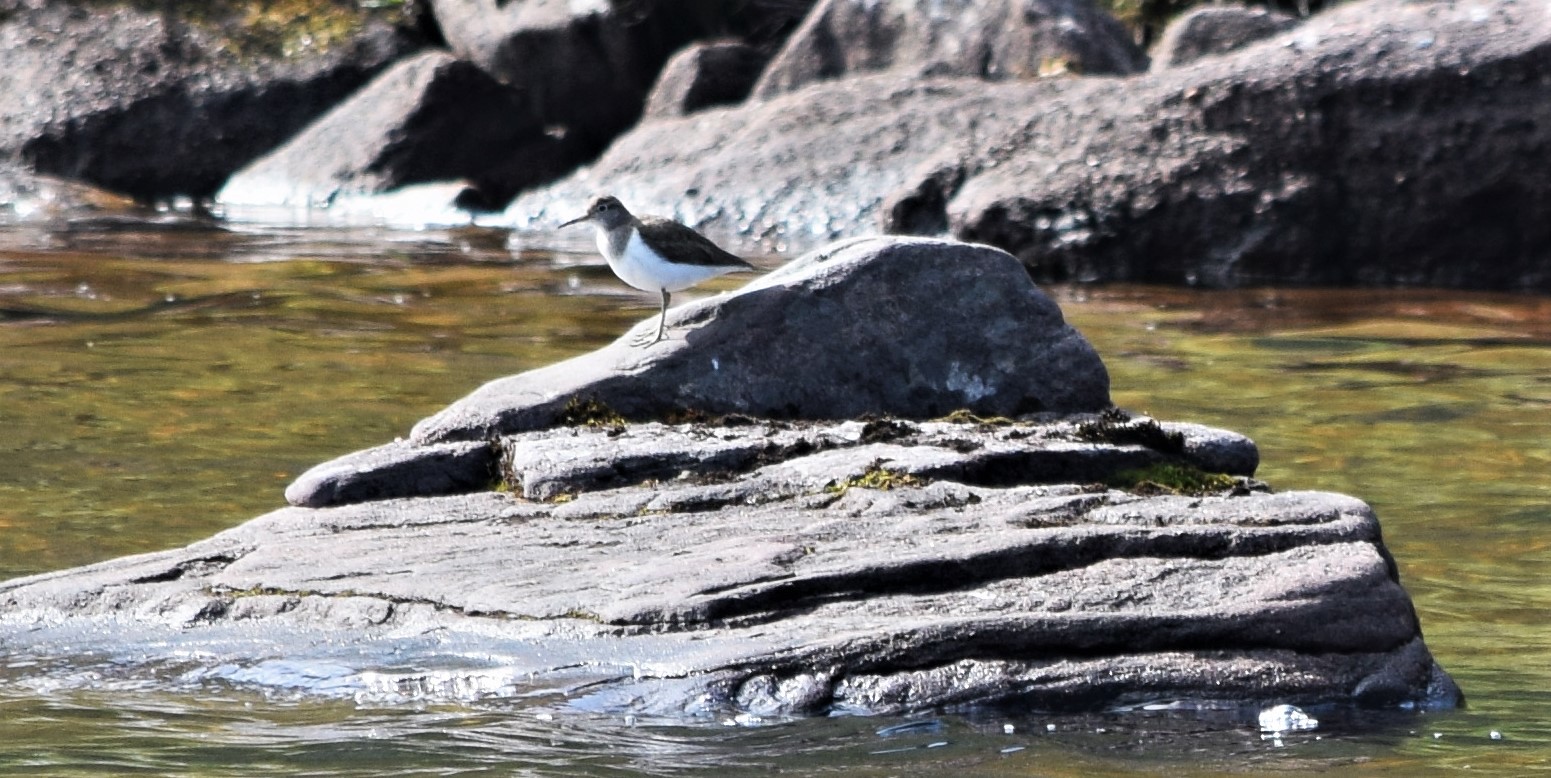 020 Sandpiper at Loch a Choire Dubh 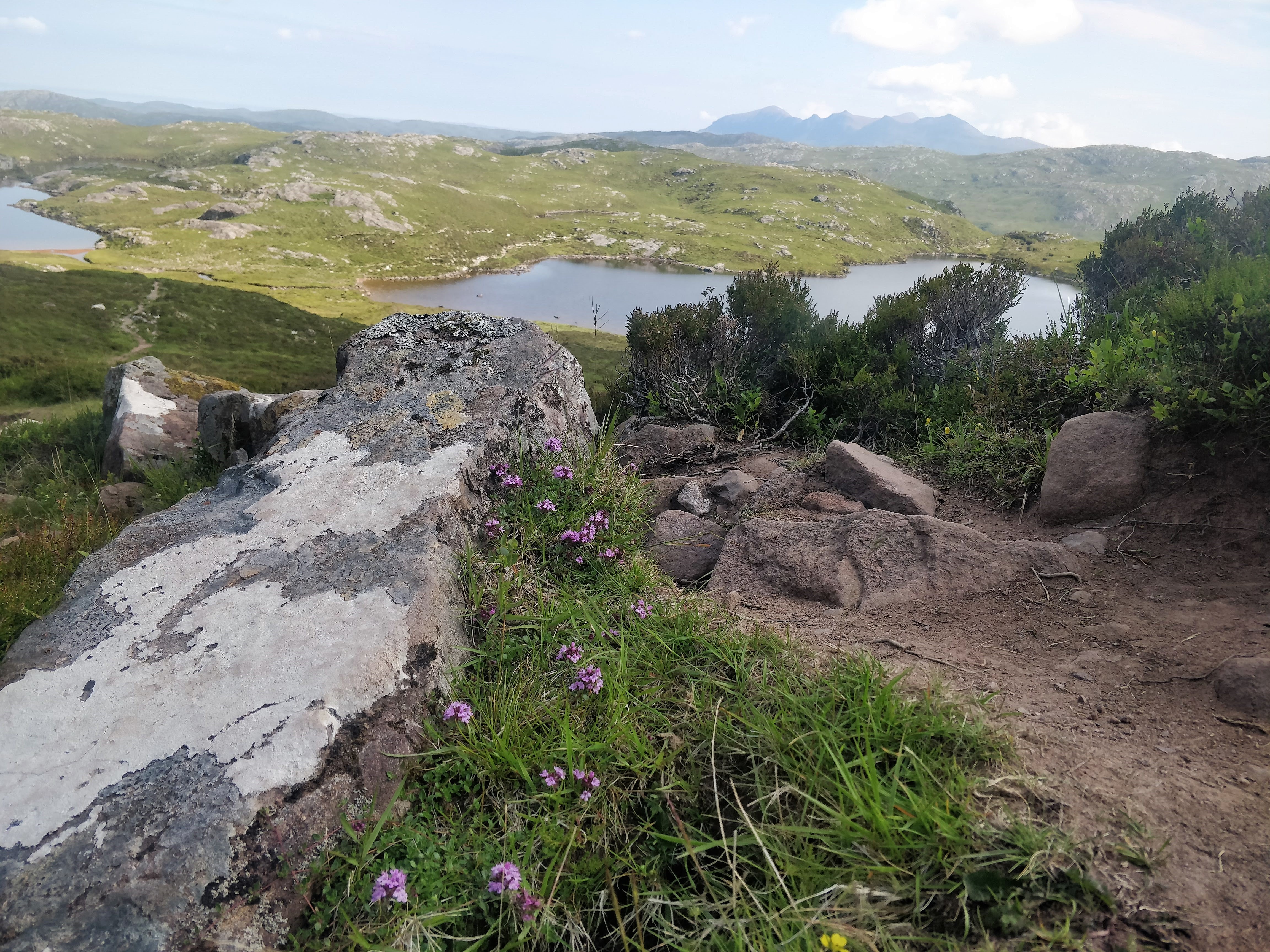 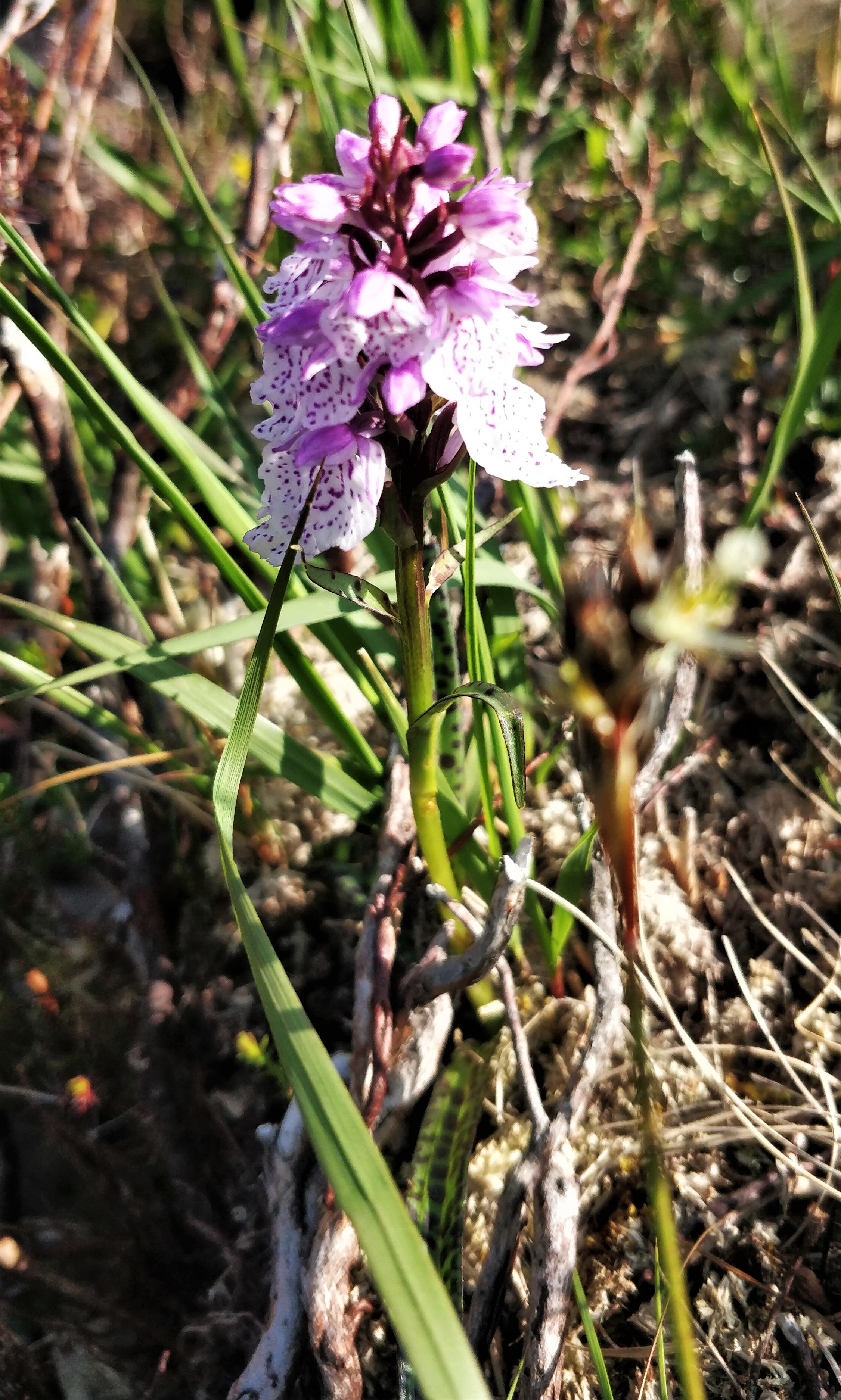 With the steep ascent to the bealach ahead, we carried on, my fella dubbing it Gollum's Pass of the Spider as he started up. 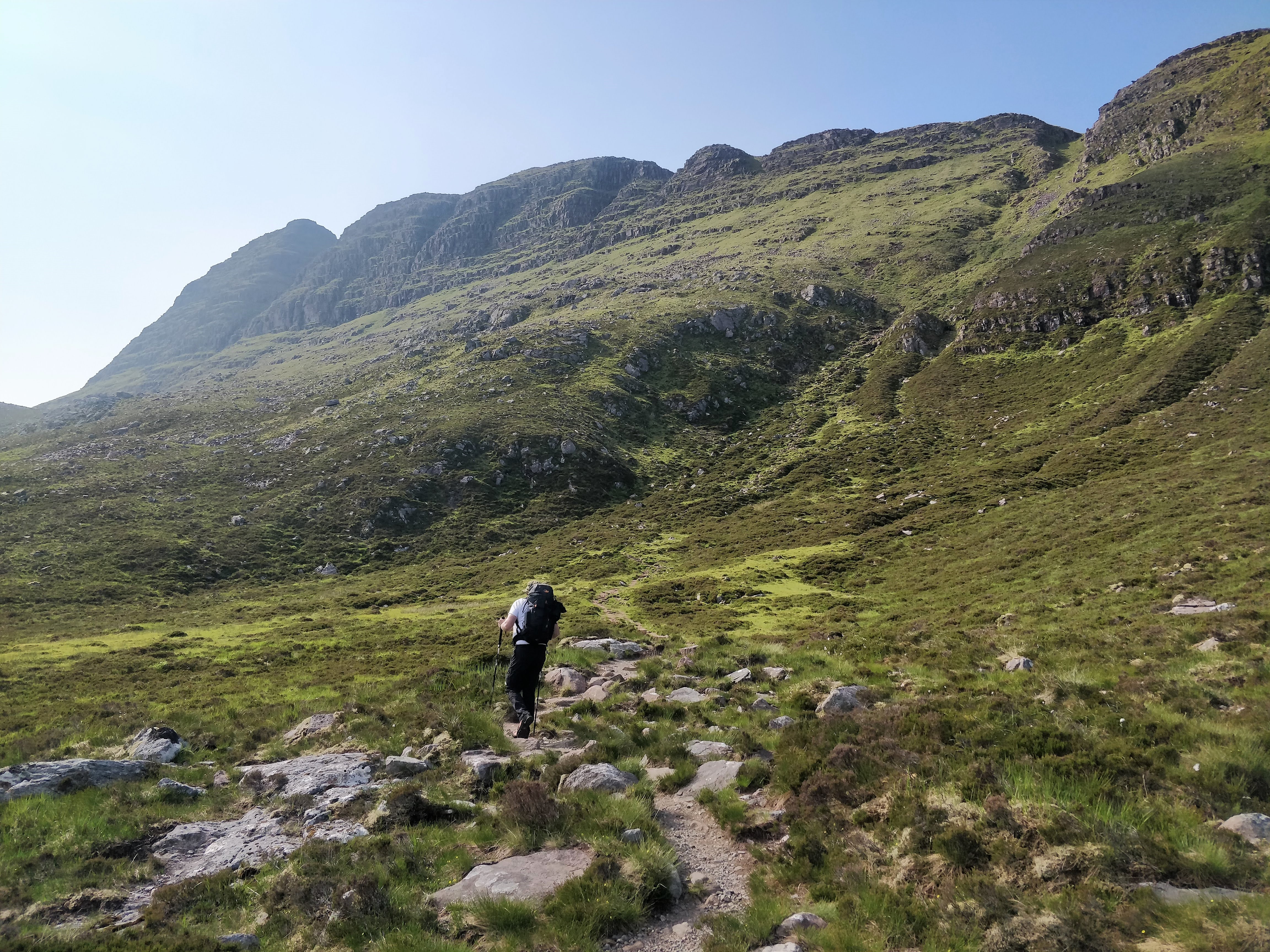 But to my utter delight, once you're inside this Suilven cleft, even here on the north side, on a dry morning like this, it is full and rich with wildlife. First up was a larva case, and then too many flowers and plants for me to include here - but my favourite was the delicate bright little starry saxifrage, looking almost like berries or jewels, and growing in the line of the burn (when rain meant there was a burn). 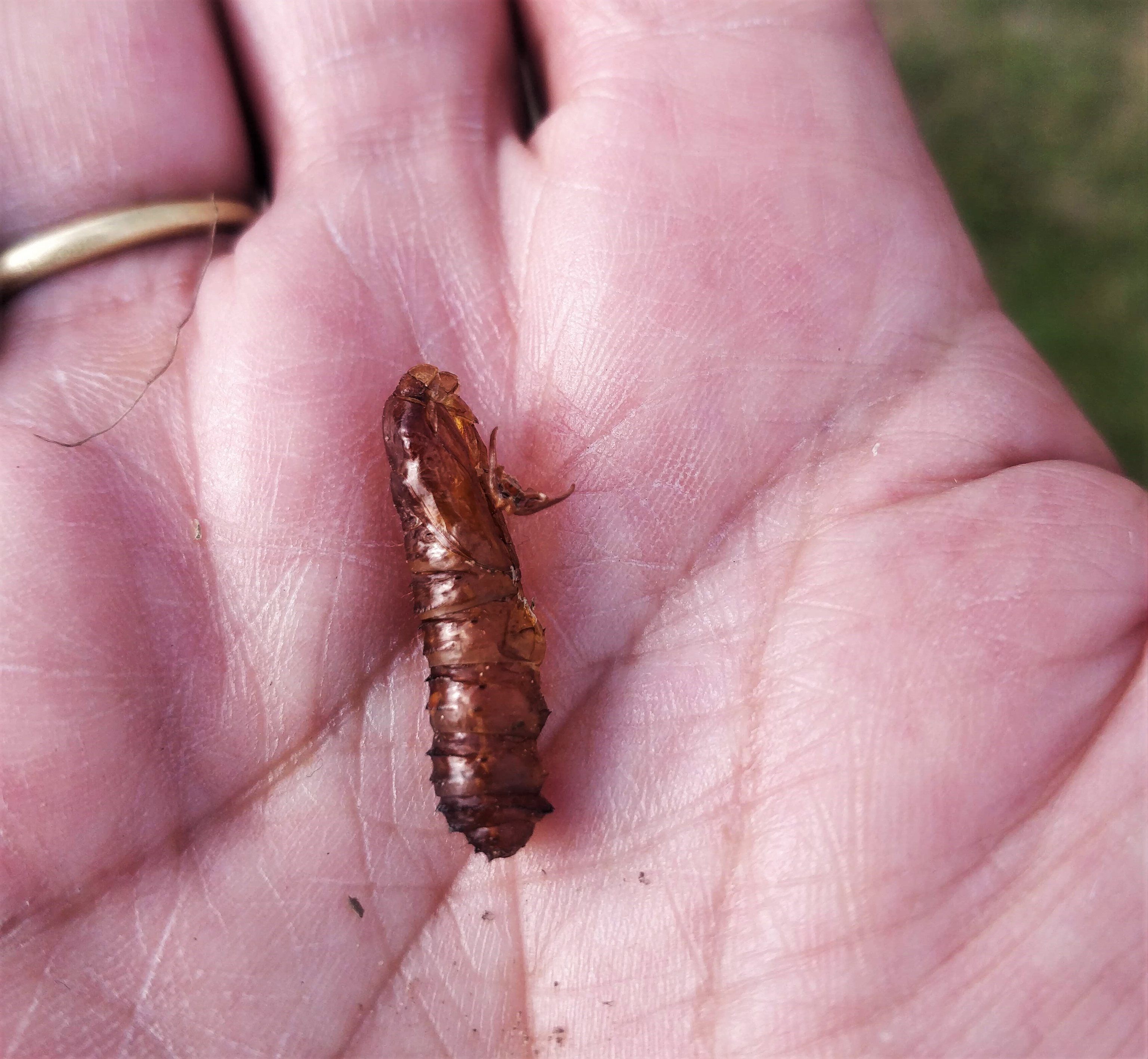 024 Whose larval case is this 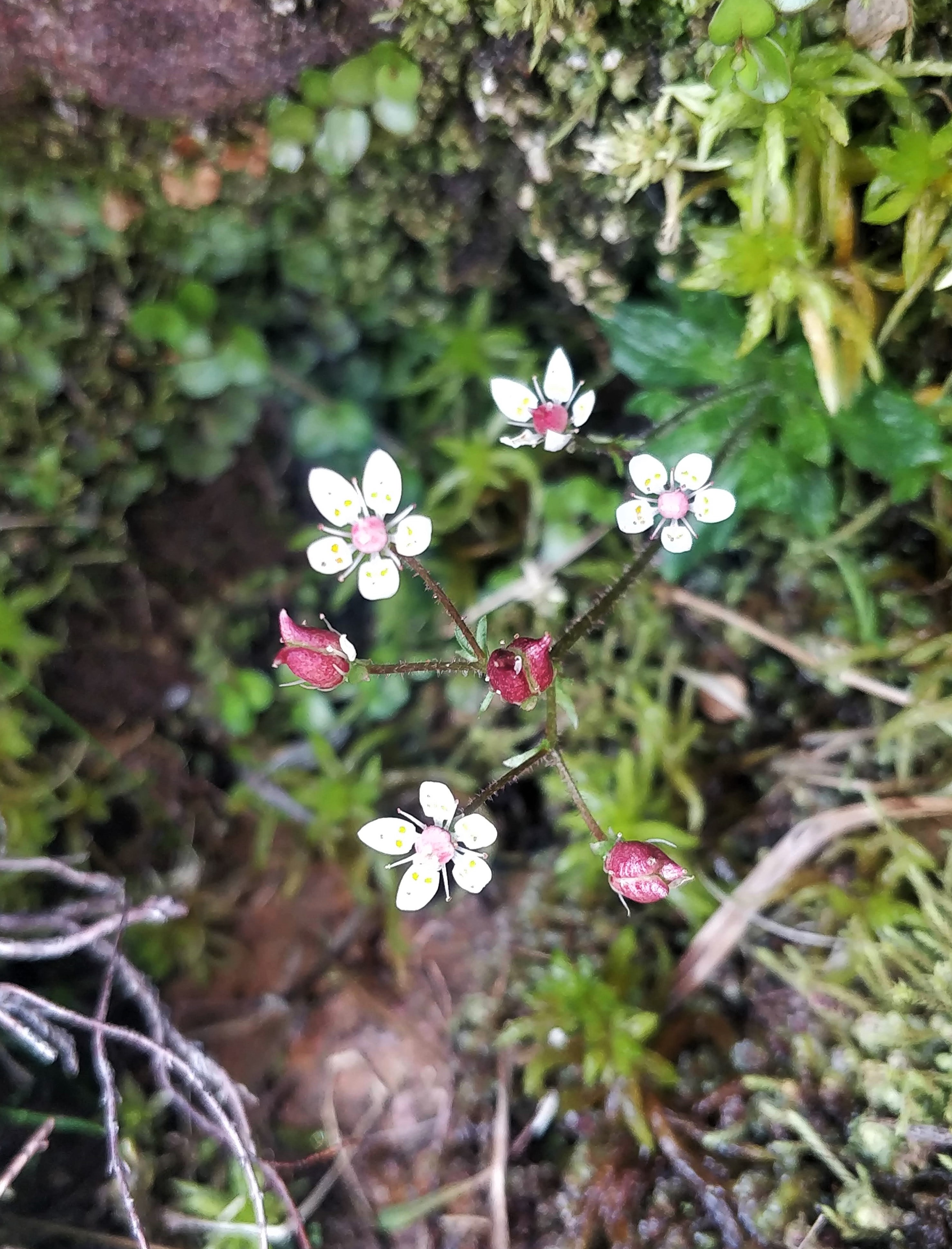 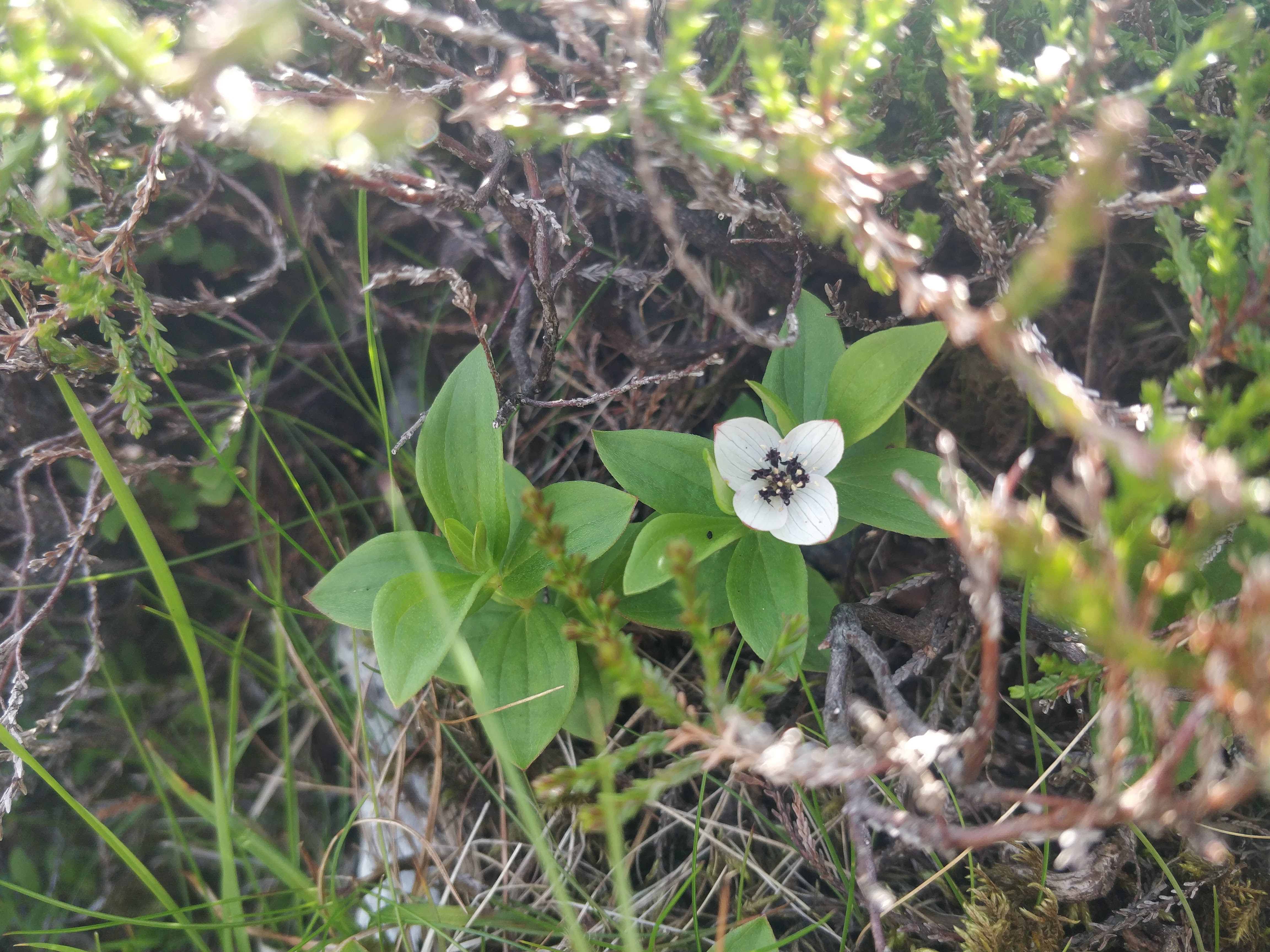 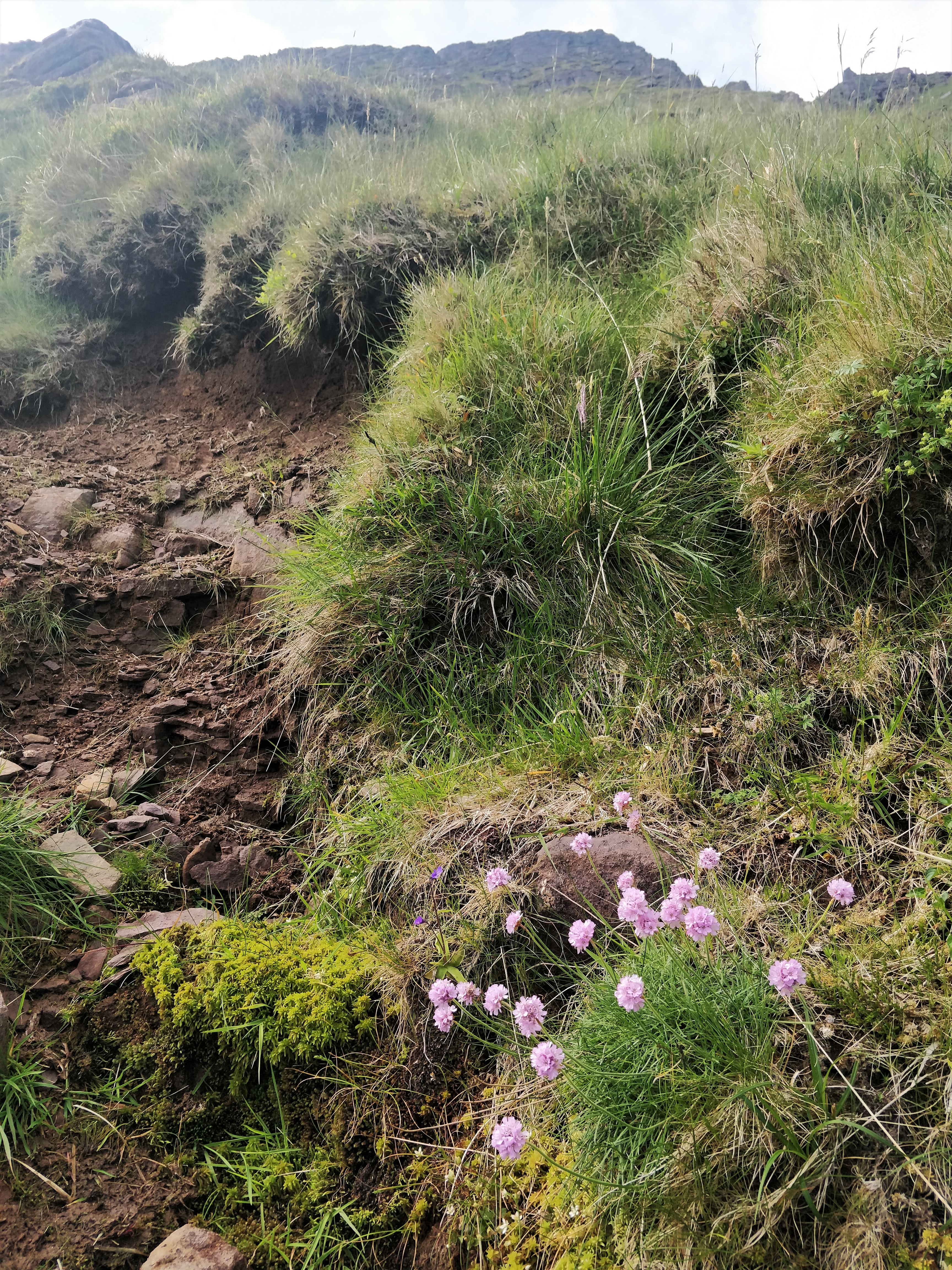 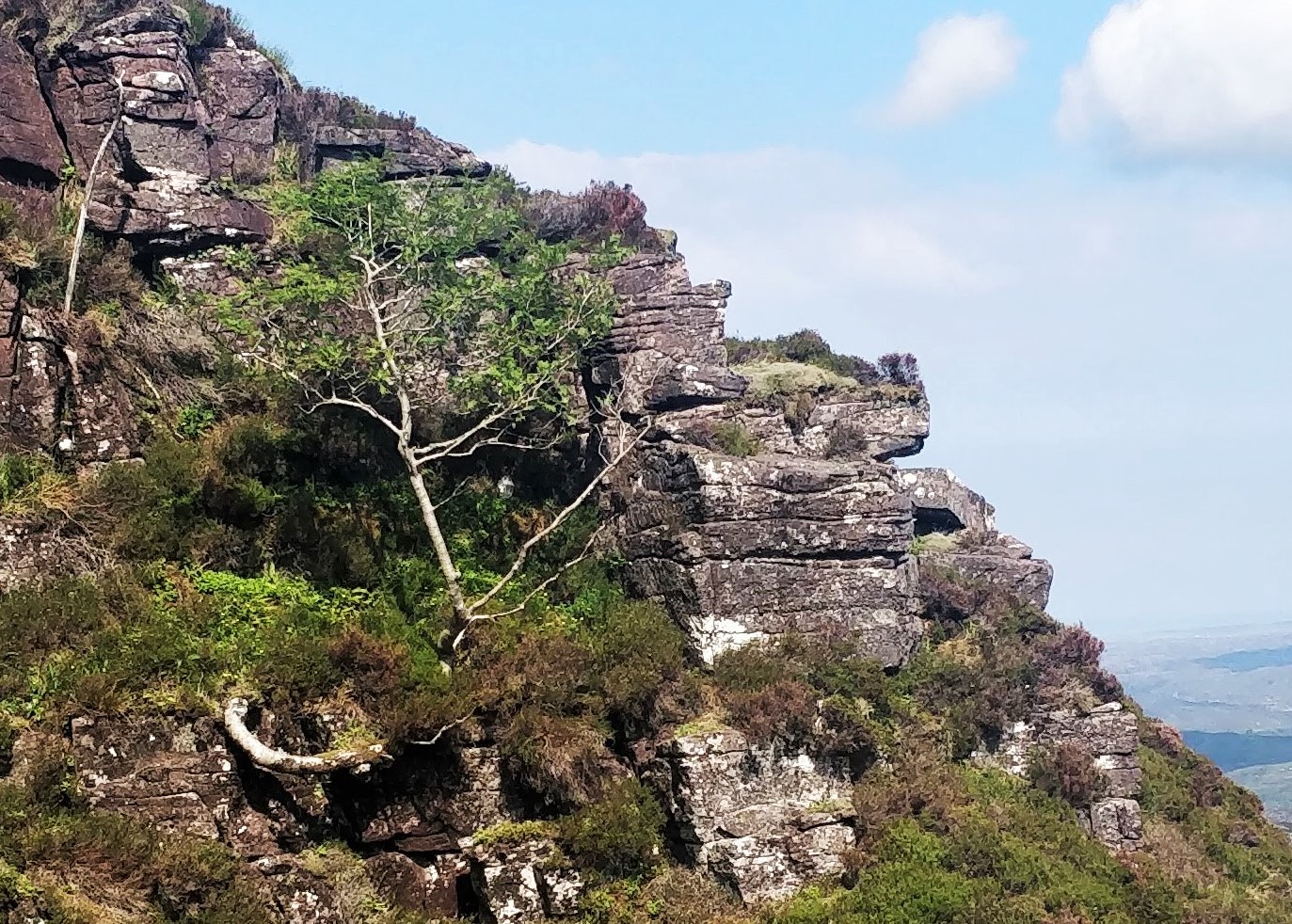 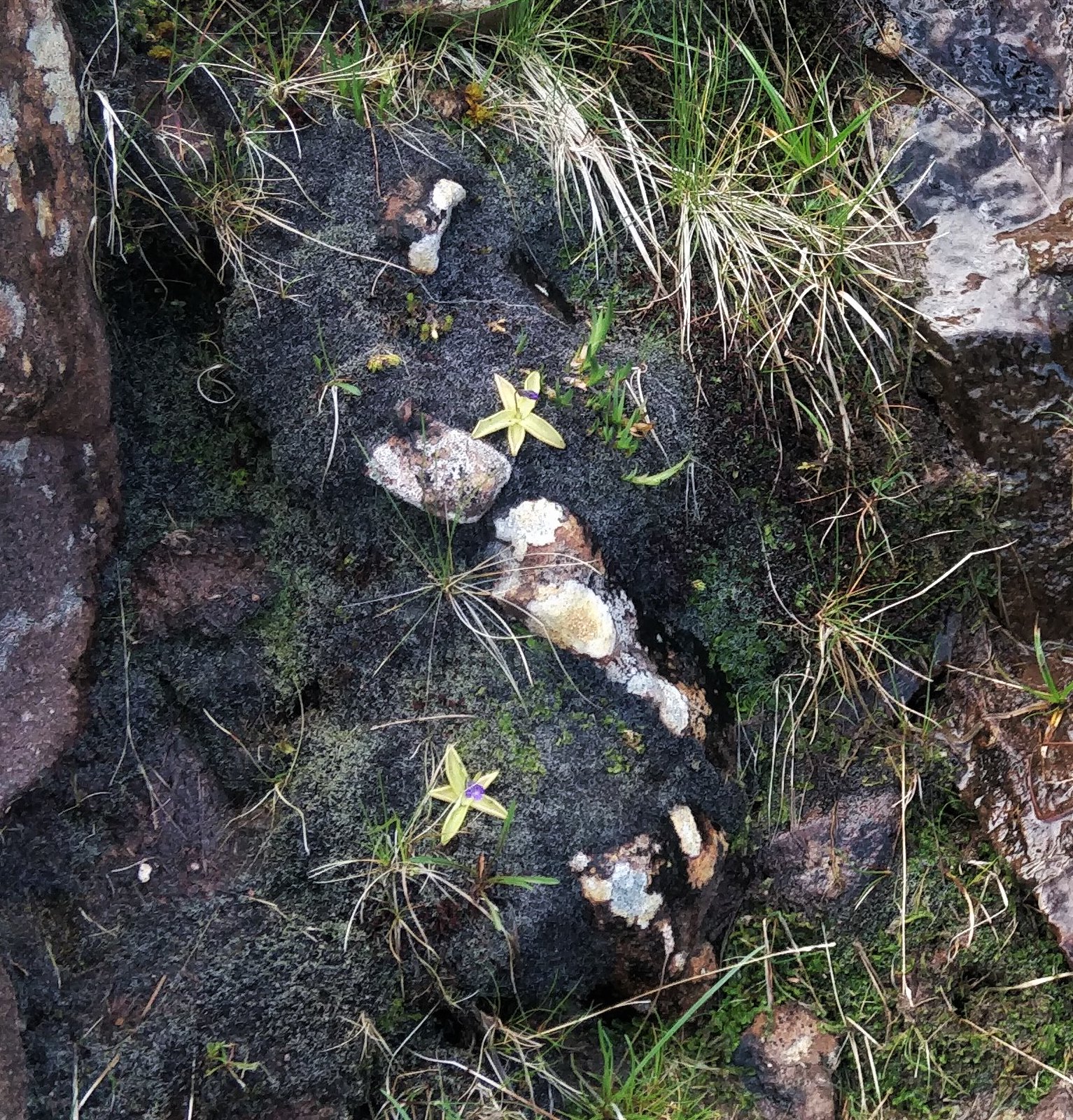 032 Moss and small butterwort in flower

I wasn't expecting this much 'treasure' on the clamber up, and on top of the morning's pine marten, divers etc. and some chimney sweep moths too, I was in an unexpected extra little heaven in my head.

The views were an absolute joy too:

037 Quinag and Glas Bheinn with Meall Horn in distance 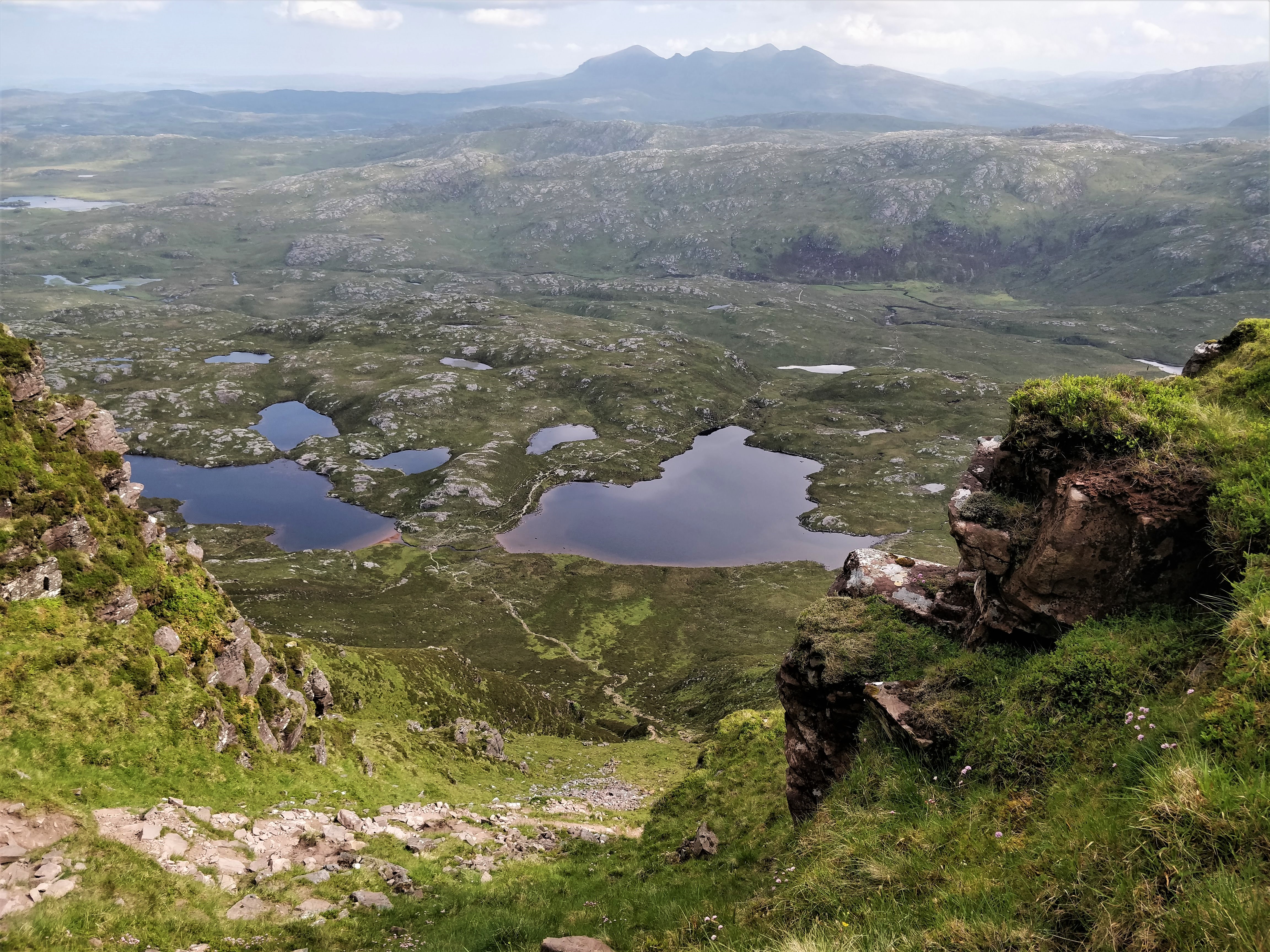 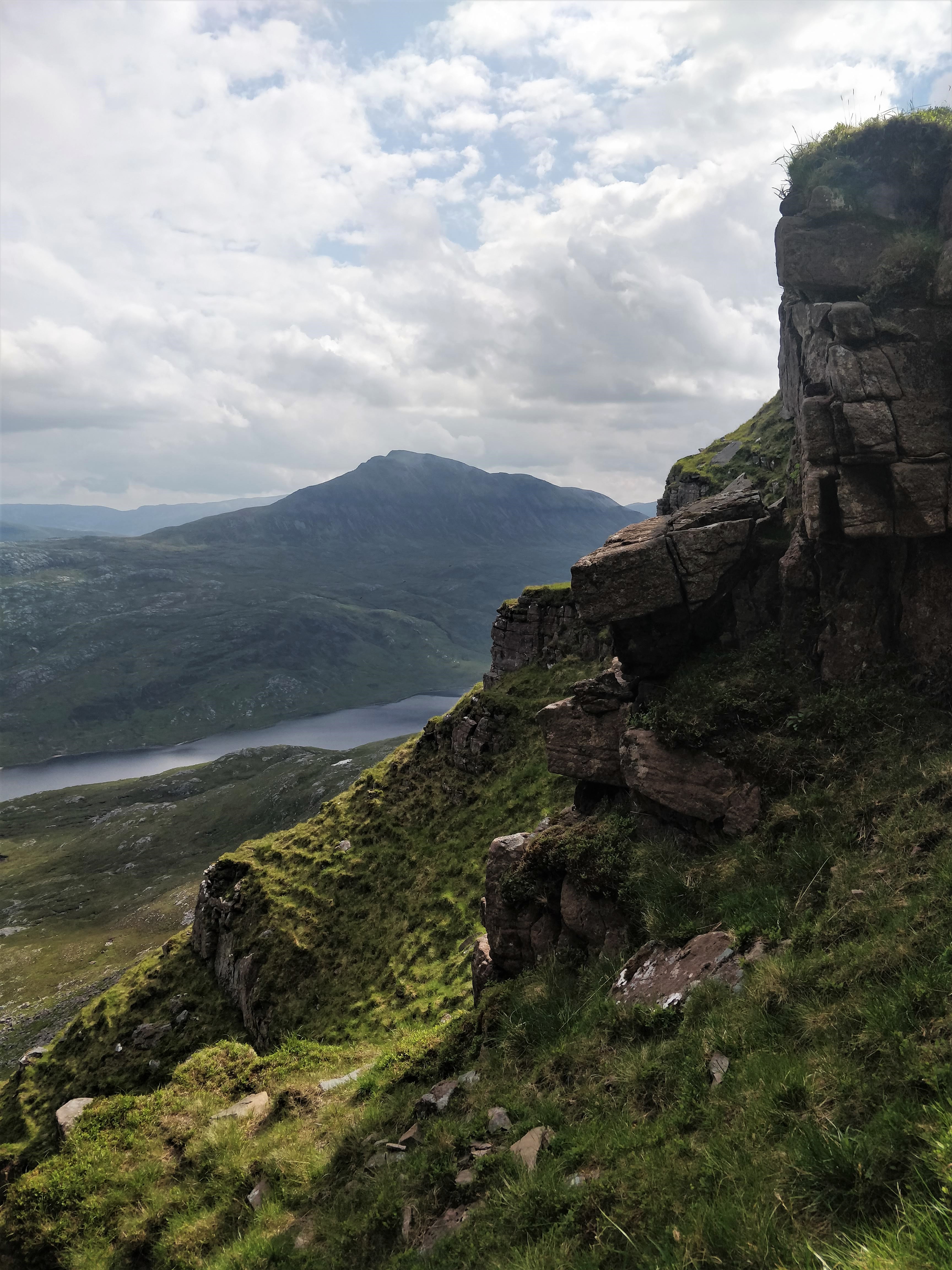 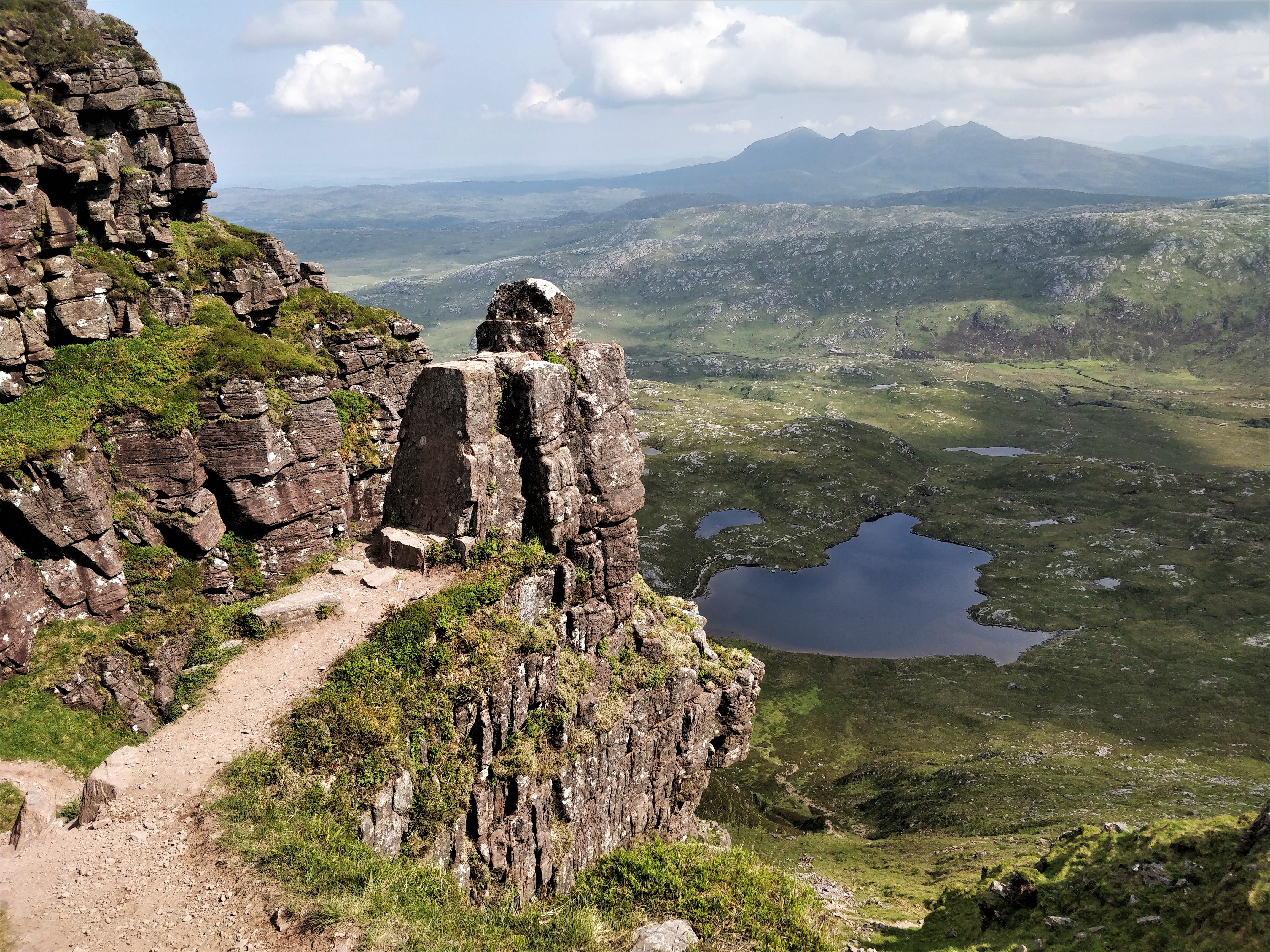 As we neared the top, I was listening out for my partner's reaction on seeing the view to the west suddenly appear - Coigach in all its splendour. But when the moment came, I heard him mutter, "I don't believe it." That didn't sound right - and it wasn't. Because there, at the bealach, the first thing he'd encountered was a guy who had tinny elevator music playing on his mobile phone. (I'd heard a drone as we were ascending, so at least this guy had put that back in its box and was on his way down now and away, pausing only to have his photo taken in one of those spots where heroes do.)

And there was the wall I'd dreamt of so vividly - with Stac Pollaidh & co beyond. 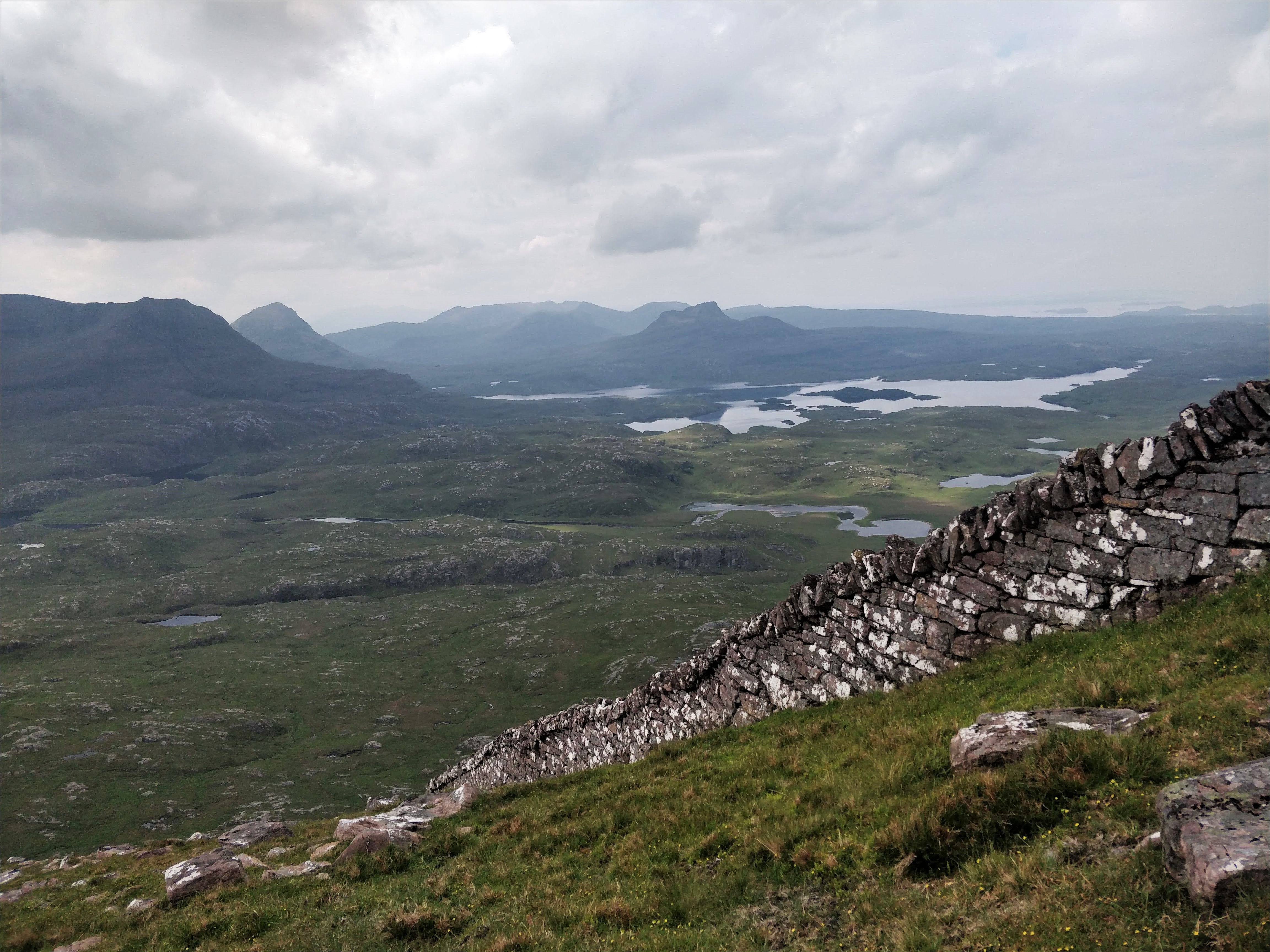 The couple we'd met at the loch had suggested we leave our packs at the wall to clamber to the top of Caisteal Liath, but in the event we forgot. I was pleasantly surprised by the scramble, though I shouldn't have been, bearing in mind the terraced Torridonian sandstone is there for all to see from Lochinver!

Another couple had appeared at the bealach too and they also looked as though they were enjoying the scramble up. 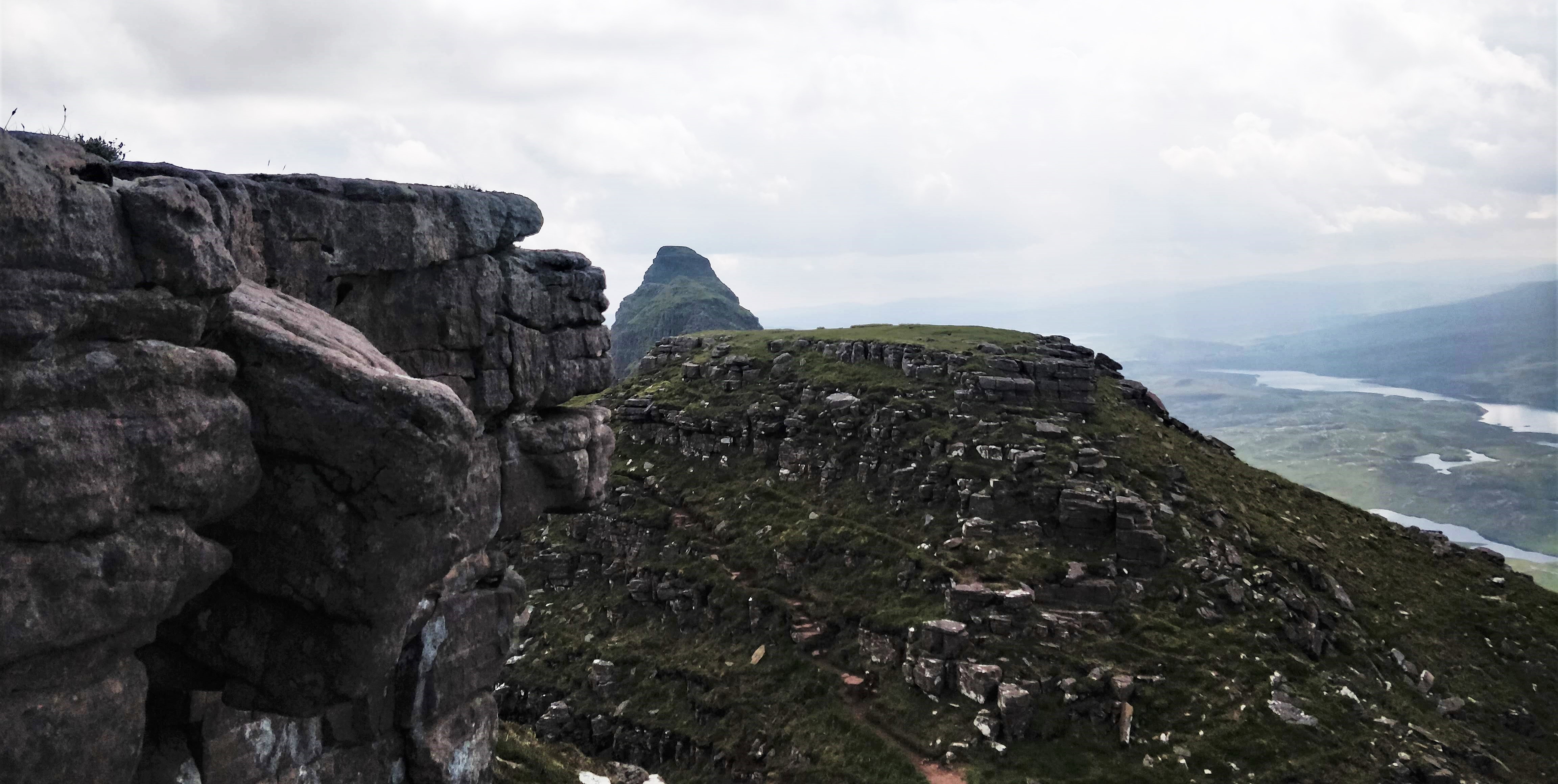 As we hit the summit, the weather started to turn and the light began to go. At the top we found ourselves suddenly walking on grass - also unexpected! We stopped and soaked up as much of the view as we could - the most stunning of which really has to be the view back to Suilven's own eastern top. (Tolkein, eat your heart out). 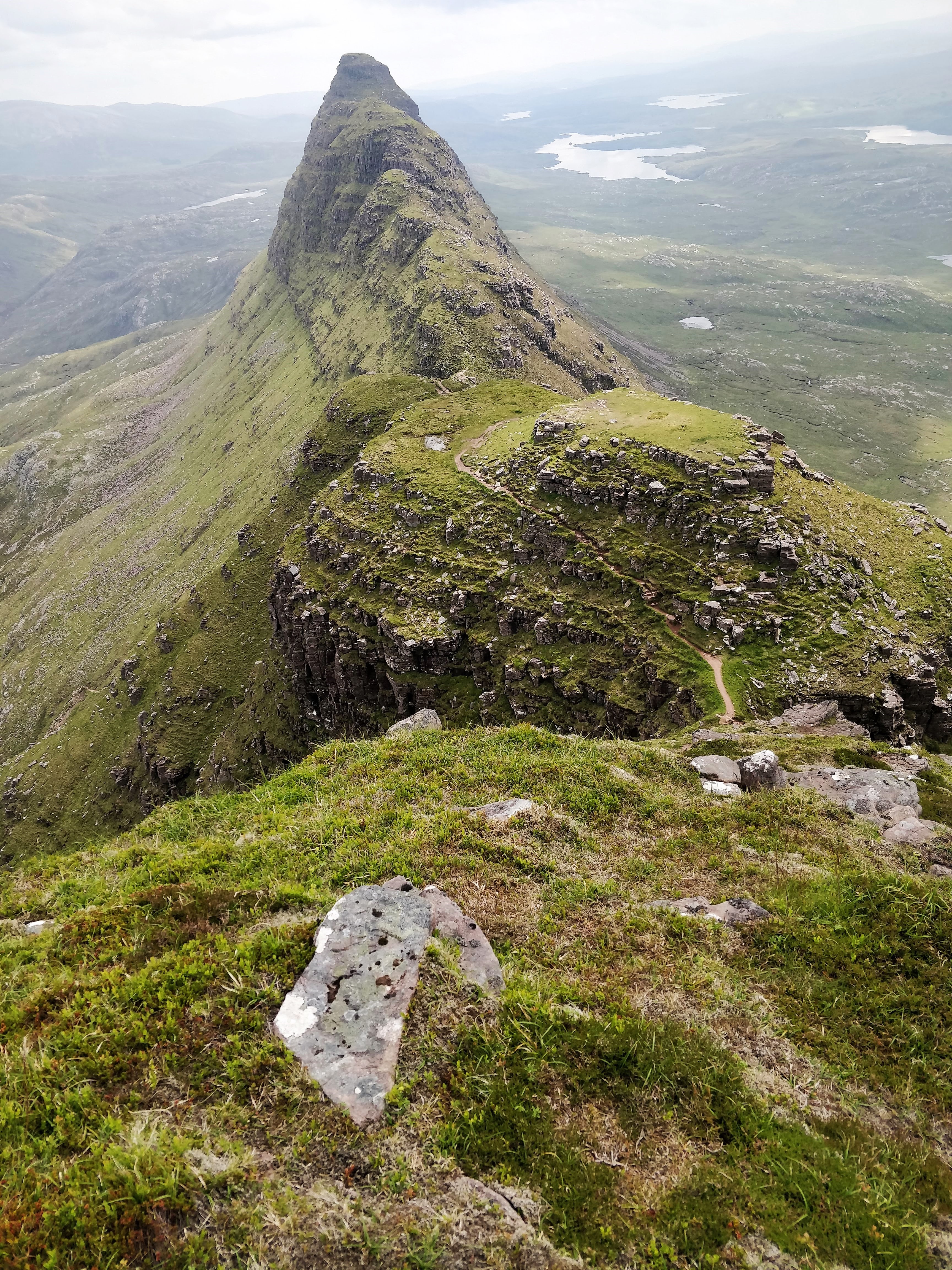 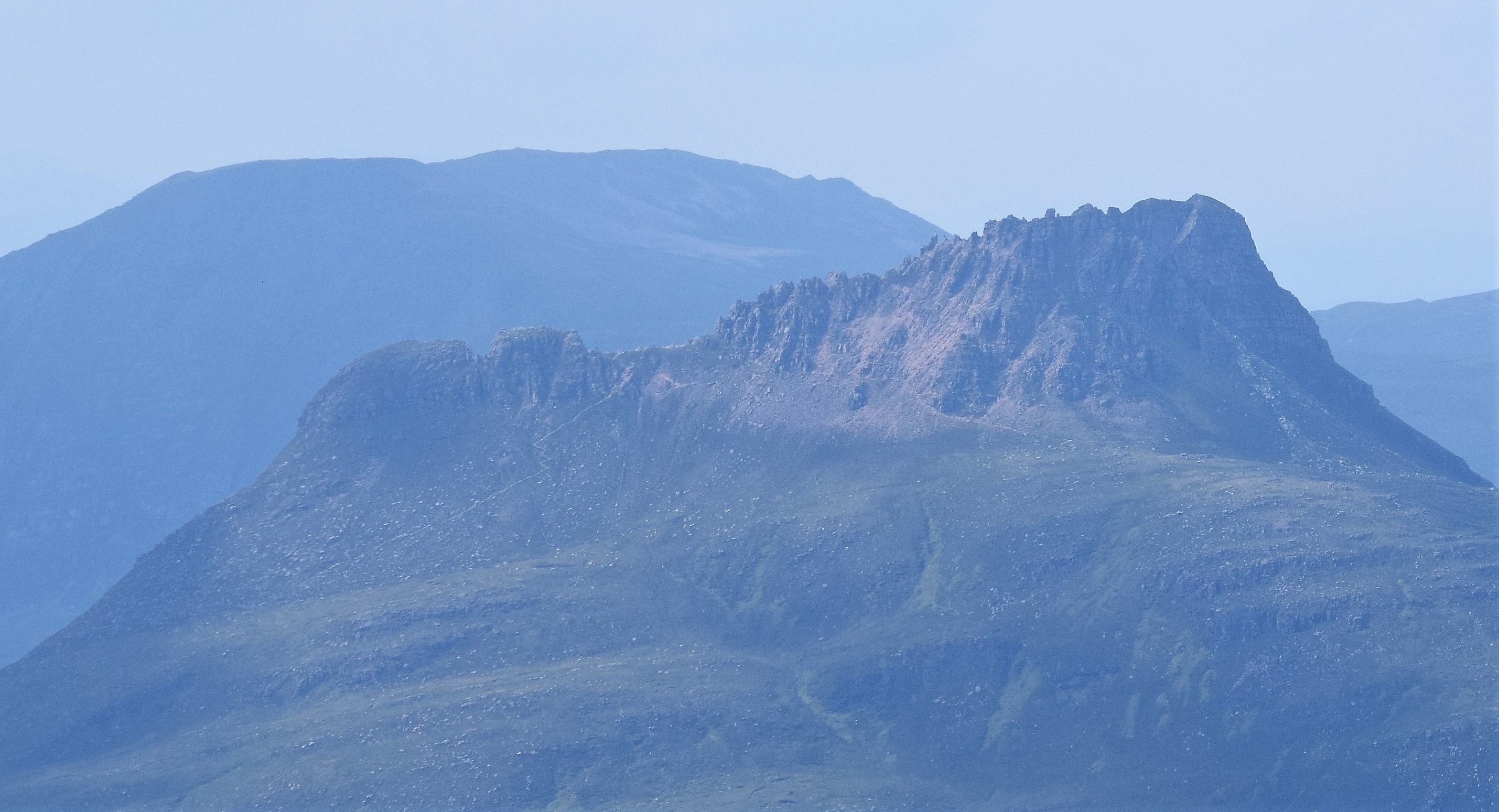 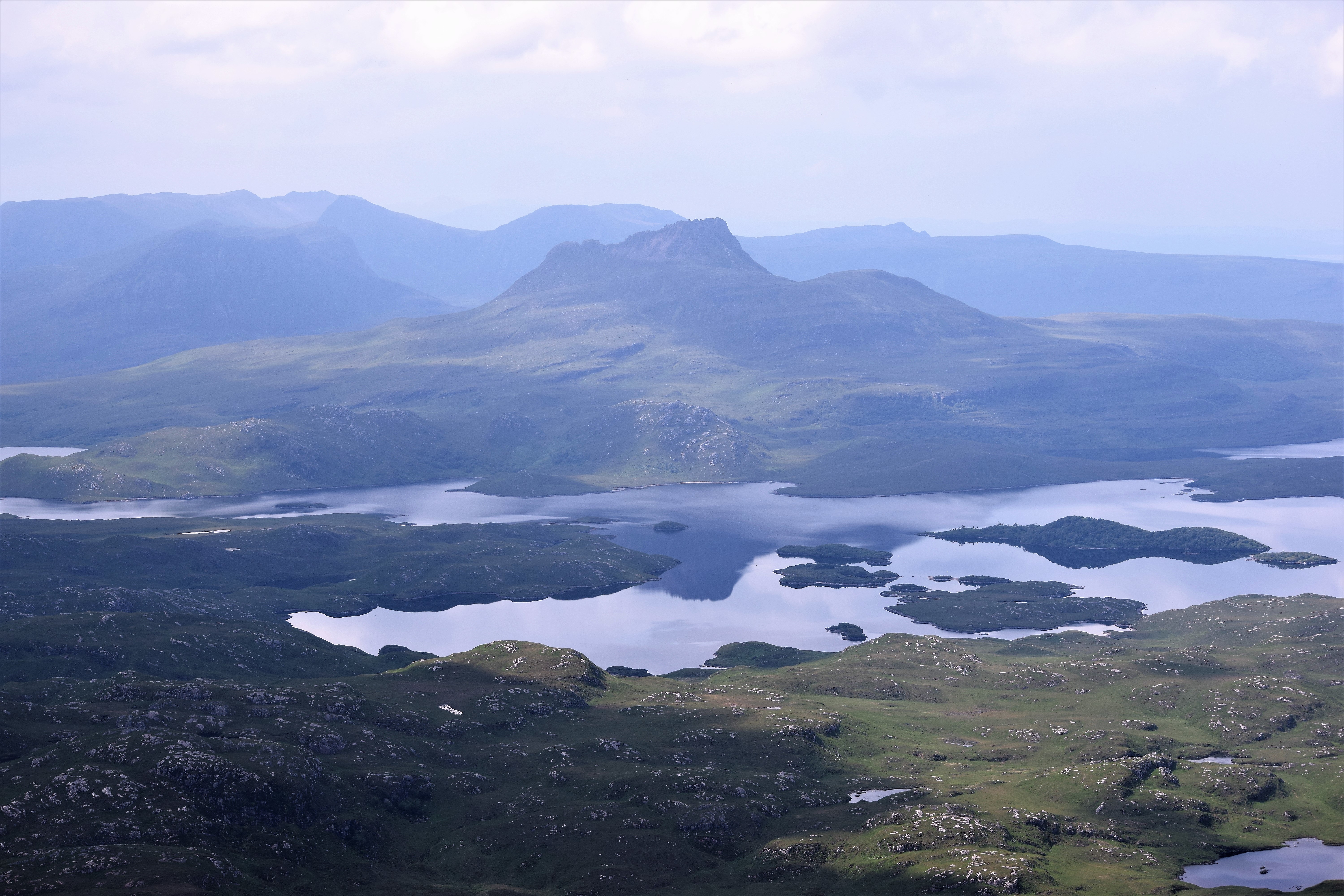 054 Stac Pollaidh with Fhidhleir and BMC

The light kept moving around, darkening the view dramatically one minute and picking out elements of it the next - it was captivating!

But then, with the rain due and with a steep, slippery descent ahead, it was time to get going, pausing only when back at the wall to enjoy this ring ouzel and its mate pecking about for food: 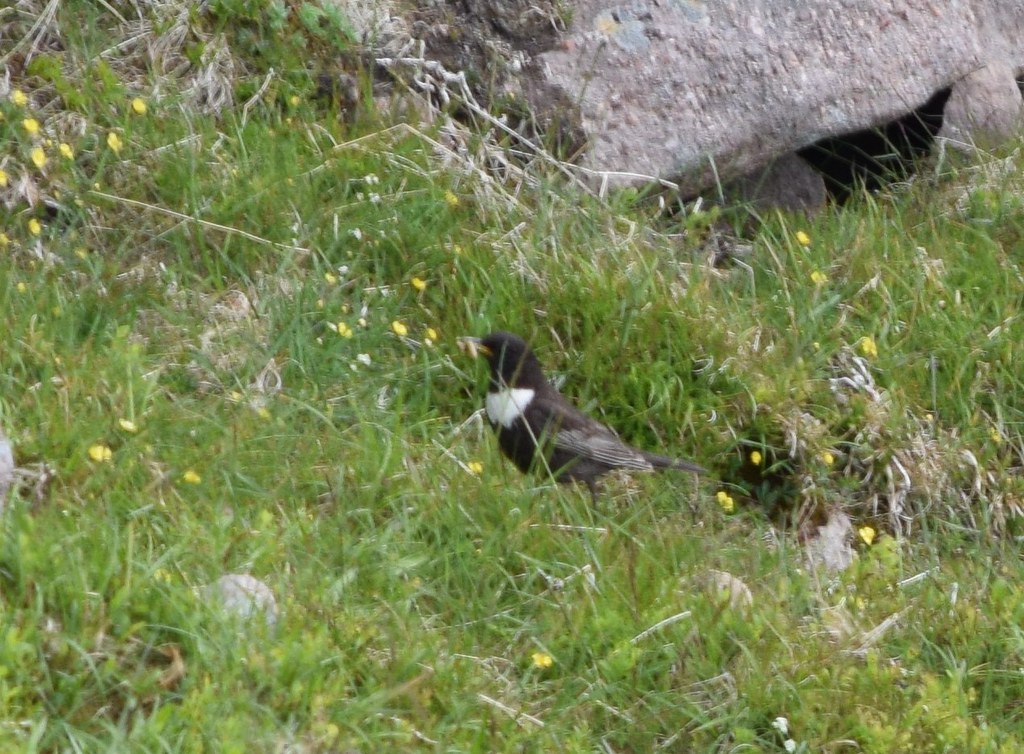 As we descended, pairs and trios were coming up, all fed up with the midges and ogling the midge jacket "Where did you get it?"; "Wow, has it got a built-in hood too?", "Now I know what to get her for her birthday..." 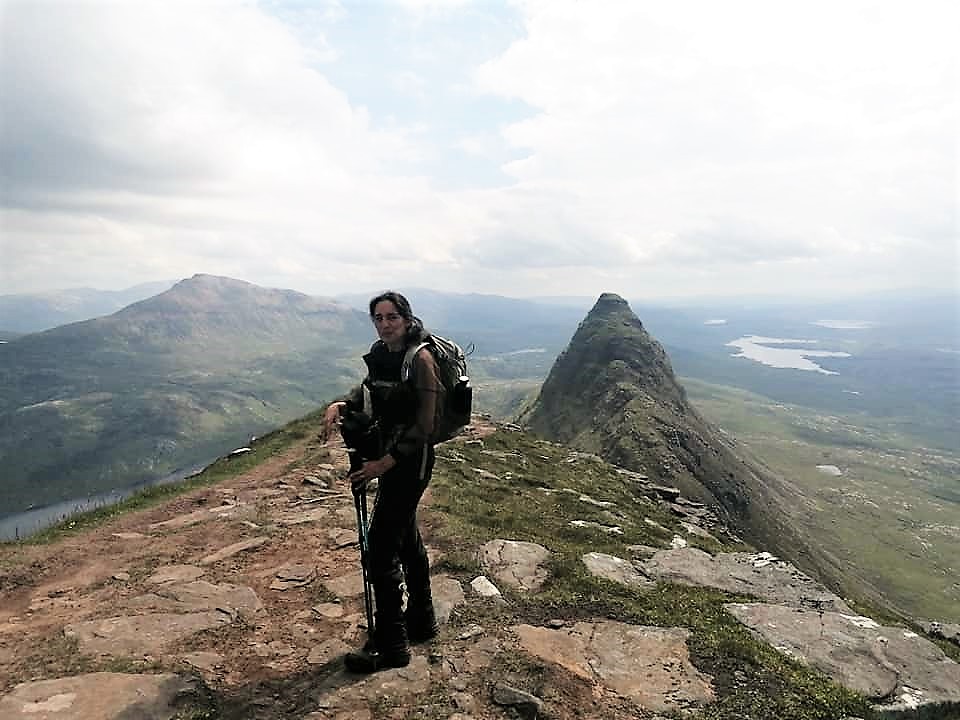 What this old thing

... but before long, all any of us wanted were our waterproofs. The two of us walked out in such biblical rain for the last couple of hours it was as though we were standing in a warm shower with the taps on full. As for the folk on the hill, I hope they didn't have too slippery a descent at the end of their day - that must have been tough!
Click to mark this as a great report. Register or Login free to be able to rate and comment on reports (as well as access 1:25000 mapping).

Quick revisit to Shalloch on Minnoch

Arkle in the sun

Waun Fach and some gory history