Another venture back down to the SW again this time for a bit of an adventurous plan - for me at least.
I looked at various options for tackling these 2 hills together, read a few walk reports and finally came up with a cunning plan. Linking these 2 hills together is not ideal as there is a glen between them which takes you down to 465m a drop of 350m off Cairnsmore which as it is quite steep doesn't take too long.
My original plan was to start from the usual start point on here, but the thought of having to ascend round Cairnsmore again was not very appealing. So the route from the SE was more appealing as it has over 200m of less ascent, which is good for me because that is where I am struggling.
We left Fife shortly before 8am and were walking 2 hours later.

We must have seen about 10 of these on our travels

Feeding point for animals, not sure if it is for farm animals or deer?

Salt block for animals. the only other time we have seen these was in the Fannichs

Excellent track with a gradual incline, the big drawback we would be descending soon

Storage area for machinery and other stuff, also has a portable CCTV system

Not the biggest windfarm

You can see the descent ahead, Moorbrock Hill in the distance would be our second hill

We tiptoed past the Moorbrock houses as the track takes you very close to the buildings. This building was being built on my last visit 5 years ago

Beautiful water feature, much better than the concrete ones you pay a fortune for at your local garden centre

Different angle, there are 3 ponds at different levels

Not a bad front drive, nice and colourful

Looking back, the terrain wasn't ideal, undulating and a tad damp

George leading the way, we are aiming for half way up the ridge - then traverse round along the 600m contour line

Moorbrock Hill in the background

The weather was pretty grotty now

If you zoom in you will see the cairn on Beninner

The final push to the summit of Cairnsmore of Carsphairn

A fair sized cairn on the summit 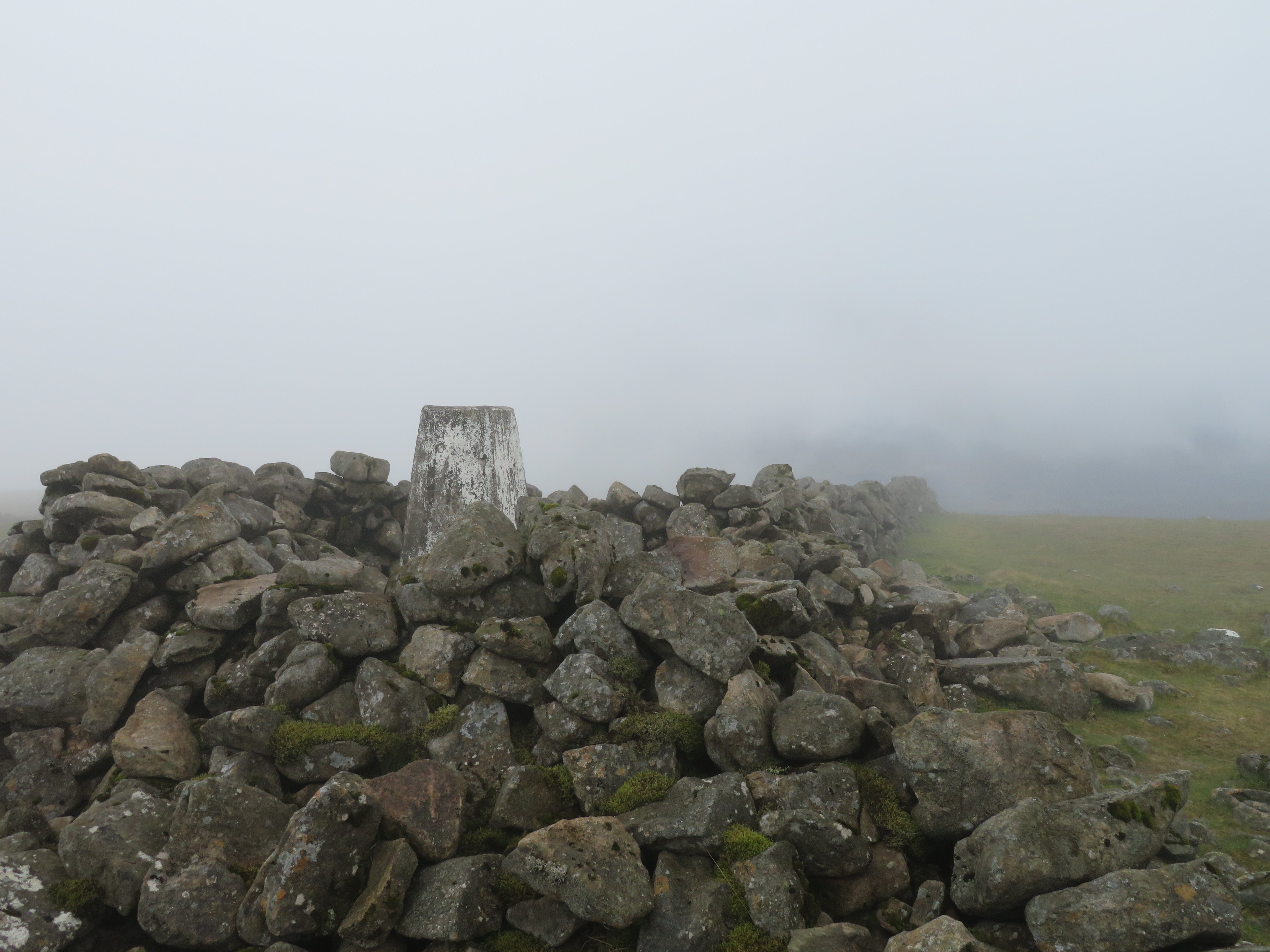 Weather was starting to improve for our descent of Cairnsmore

The descent was fairly steep but very doable 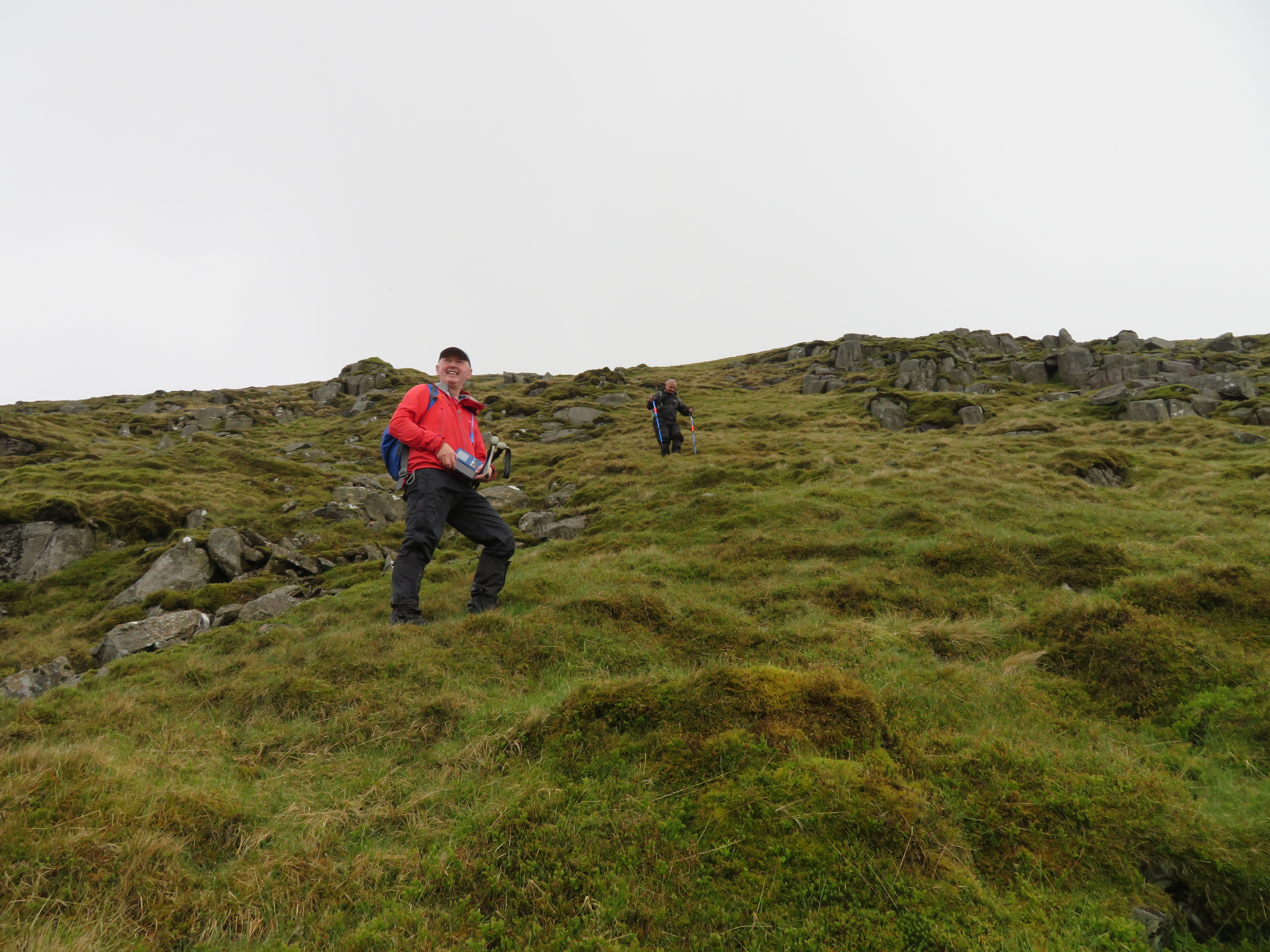 One of George's looking uphill

Moorbrock Hill, our original plan was to head straight up the front of it

Not much descending left, the ground was to get rather damp underfoot

Looking back up to Cairnsmore of Carsphairn, doesn't look steep from this angle

Parminder found a cane with a wee flag on it, he was planning to utilise on the summit of Moorbrock

We spotted this track earlier and amended our approach up Moorbrock to make the underfoot walking much easier, it did involve adding a bit of a detour but it was a much better option than a pathless slog

And another one, with Beninner in the background

The track is a bit overgrown, but still much better than tussocky grass

Interesting grassy plant formation, quite a few of these

Looking down towards Moorbrock House, this would be our descent route

We are now on the summit plateau area of Moorbrock, the summit isn't what you could describe as pointy

Final descent now, we are aiming for the track and then Moorbrock House area

Very tidy area around Moorbrock House and the other buildings

Despite the grotty weather at the start of the day, I really enjoyed myself, still struggling uphill but I think I am improving slightly. Our next outing will depend on where the weather is more favourable, we may even head north and tackle one of our outstanding Munro's.

Cracking day - so different from 2 weeks ago