Beinn a' Chàisgein Mòr from Gruinard

After a nine and a half hour drive from NW Shropshire to the NW Highlands I pulled up in a spot overlooking Little Loch Broom at 1am. Through a combination of dehydration and excitement I'd managed to drive straight through with only a quick stop for fuel. Even by the light of the full moon the hills all around looked spectacular. Alarm set for 5am I curled up on my back seat for a not too bad 4 hours of broken sleep. Up bright and early I got ready, said morning to the deer, and watched the first orange glow behind the hills surrounding the Loch. Five minutes down the road and I was at the Gruinard River ready to go at 6am. The plan was to walk to Beinn a' Chàisgein Mòr and then decide whether snow and energy levels would let me push on to A' Mhaighdean. The forecast was for sun and warm (for March) temperatures at sea level.

The first few miles were easy going along the track beside the Gruinard River. Although tempted, I didn't bring a bike so I could keep my return options open. If short on time a bike would make this bit way quicker, but the scenery is so good that walking was fine. I left the track just before it dropped to cross Allt Loch Ghiubhsachain. Keeping a bit of height below the crags there was some sort of deer / human / deer-human hybrid path in places as I climbed. This section looked like it would be a bracken infested mess in summer but was straightforward this time of year. The plan was to cross the now pathless terrain to meet up with the path marked on the OS map to the south. As with most of this walk, paths were short supply and this one didn't seem to exist, or at least I couldn't find it. There was a cabin so I headed for that through the peat bogs, assuming I would be able to pick up the path there. No such luck. I should have checked the map as the path seems to be marked a little bit to the west of here. A bit more peat bog fun and then the rough heathery ground that had been with me from when I left the track turned to something a bit grassier as I started climbing again. There were now views to some of the hummockyist hummocky moraines I'd ever seen on the shores of Loch Toll a' Mhadaidh. 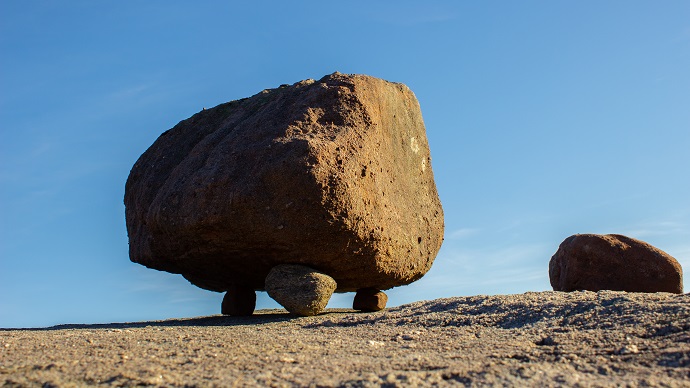 I reached the broad ridge between Beinn a' Chàisgein Mòr and Beinn a' Chàisgein Beag and was greeted with my first glimpse of the view to the south with snow-capped Torridon peaks now visible in the distance. After some food it was onwards and upwards towards Beinn a' Chàisgein Mòr. Collecting some water from a snow patch on the way up I made good progress on the short grass and occasional lingering large snow drift and was at the top at around midday. I left my camping stuff and lightened the load. After ten rough, and mainly pathless, miles I was doubting the out and back to A' Mhaighdean. I probably had time but not the energy to make it there and back or to lug the camping stuff up there to save the return trip. Decision made, I'd have a leisurely walk around the vast summit area while rethinking the plan (perhaps that's more decision postponed). What a place to be, An Teallach, Torridon, Slioch, Skye, Lewis, but it was the view to A' Mhaighdean that really caught the eye. A staircase of Lochs and Lochans lead up to its rocky, bulky western face. The views were best from the promontory above Carn Mòr where I could also see the full length of Fionn Loch and the causeway far below. Given that there was still five hours of light left I couldn't really hang around on the top as, despite the great views and sunshine, it was pretty cold in a strong wind. I decided to make my way back to Beinn a' Chàisgein Beag and camp there as that wouldn't be too hard and would save my legs a bit in the morning. I took it slow and had a bit of a wonder around to use up the time. After a while I was crossing the obvious path at the foot of the hill. It was so clear here that I'm not sure how it disappears, or I couldn't find it, further down. Oh well I like a bit of toil anyway. Toil describes my last climb of the day. I was now very weary, and I found the short climb was pretty tough. However, keeping plodding I soon made it to the top and sat on a rock eating and recovering. It took me about half an hour and a fair bit of food and water to start feeling human again. The views here were almost as good as it's bigger brother, but its bulky sibling blocks a chunk of the view to the east (it's not really a looker from this angle). I set the tent up just below the summit, out of most of the wind and on flattish ground. I then watched the sun setting behind the Isle of Lewis. When it was time to sleep the wind played a cruel trick and changed direction slightly ruffling the tent loudly, so I slept with earphones in and some relaxing music. This worked quite well, and I can't believe I've never done it before. An Teallach in the evening light Sunset behind Isle of Lewis Up about an hour before sunrise I packed up and headed to the rocky outcrop to the north of the main summit. I was then treated to a colour show of purples and oranges before the sun rose. First light behind An Teallach

I settled on a return route via Loch a' Mhadaidh Mòr as I thought retracing my steps would be a bit of an anti-climax. A straightforward decent of Beinn a' Chàisgein Beag to the northeast and then across the river, which I intended to follow this to the loch. However, the peat got slightly frustrating, so I climbed halfway up the hills to the east of the river before dropping down to the loch. Looking back to Beinn a' Chàisgein Beag

The loch itself was a great place to be, with a remote feeling, I followed its eastern shore via sandy beaches and rocky outcrops before climbing a small hill to its east to avoid some awkward looking rock on the shore. The hill turned out to be an unexpectedly good viewpoint with views of Lochs, hills and sea.

From here I picked up my first proper path since leaving the land rover track the previous morning. It was a very pleasant change to not have to think where I was going and let the path do the navigation until I realised that the lochan I was next to wasn't the right one and the path on the map wasn't the path on the ground. All that time waiting for a path and then it leads me the wrong way, a check of the map and 10 minutes back the way I'd come, and I found where my path should go but no sign of it on the ground. I soon reached the correct lochan, found the path, and from here it was plain sailing back to the land rover track where the path is marked by a small cairn. Then it was just the couple of miles back to the car. 200 yards from the road I met the only people I'd seen all weekend and had a chat about the weather, as you do, then back to the car. West side of An Teallach The long drive back was made slightly easier as I could now see all the views that I'd only seen by moonlight on the way, but I had to resist the urge to stop and take photos as a 9 hour journey is plenty long enough. In hindsight it was a long way to go to climb one Corbett and one Graham, but I didn't care as it wasn't about that, it was about getting out into the middle of nowhere in spectacular scenery and I definitely did that.