I found out on the Saturday that there was a good forecast for the Borders for the next day, and even better than that....I had the day off work!
The choice was between a day watching telly, or getting out for a much needed walk somewhere. I caught the half eight bus from Hawick to Galashiels, thinking I might hit The Eildons, or head up to The Three Brethren from Selkirk (again!), on reaching Gala and checking the bus timetables I discovered that there was a bus heading to Peebles so I got on that and headed west, thinking I might get off at Walkerburn and tackle Windlestraw Law, but I decided to stay on the bus till Innerleithen and head over "The Minch" to Selkirk. This route follows the Southern Upland Way and that actually goes to Melrose, but I'd checked the bus times and there was bus at 15.46 from Selkirk, so I decided to cut off there, that gave me five and a half hours to complete the walk...no bother, or so I thought!
I got off the bus, turned left onto Traquair Rd, passed the Traquair Arms Hotel (good beer to be had in here!) and made my way to Traquair. There were still a few clouds around and it felt quite cool until I reached the village hall, and started the gentle incline towards the forested area, and then the sun broke through, and the temperature rose, so at the bothy, I stopped at took my jacket off, and it stayed off till I reached The Three Brethren!
There's no really tough parts on this walk, the paths are good, apart from one short muddy stretch through the forest just after Minch Moor, but that's it really!
I stopped for a quick lunch on the fringe of the forest at Hare Law, sitting on a stile with cracking views over to Brown Knowe and down towards Yarrowford and beyond, the weather forecast was right, visibilty was VG, and I could see for MILES!
Aware of the time constraints, and having a bus to catch, I soon started on my way again, reaching the top of Brown Knowe, with the views changing and The Eildons coming into view and the Three Brethren beckoning in the distance.
The sun remained high(ish) in the relatively cloudless sky, and a cool refreshing breeze stayed with me as I followed the old drove road to Broomy Law and onwards to the Brethren.
I'd been keeping a close eye on the time, as I had a bus to catch, and sunset was at about 3.30-3.45, so I was quite happy when I reached the Three Brethren just after 2 o'clock, that gave me PLENTY of time for a second lunch, so I scoffed the remainder of the soup from my flask and the two remaining pork pies...and the banana...and the breakfast biscuit which I wasn't in the mood for earlier! That left me with just over an hour to get down to Selkirk to get the bus...PLENTY of time!
I took the Southern Upland Way path but turned off at Peat Law, passed the reservoir, and made my way down Corby Linn road, where I checked the time and realised I had 20 minutes to get up to The Square to get my bus, I know from experience that it takes me a good half hour to do that, so I set off, hoping the bus would be late, unfortunately it wasn't, and I had to wait 50 mins for the next one.....not the end of the world, I'd had a cracking walk, in cracking weather....it'd been a good day, all the better for being spur of the moment!
Some pics of the day...... Innerleithen with Lee Pen on the left and Kirnie Law on the right. The dry stane dykes at the bothy had slates with "memories" and names written on them, at first I thought they were the names of various pets, but on further inspection, I took them to be for horses. Something's having Grouse for lunch! Sparrowhawk perhaps?? I saw no birds of prey on the walk so I've no idea what took this! The Point of Resolution art work. Explaining "The Point of Resolution" The Cheese Well. Tradition has it that travellers across the moor leave a gift here (presumably cheese based!) for the fairies to ensure a safe journey. The fairy loot, presumably they'd eaten the cheese! Don't think they'll get far on that tho! 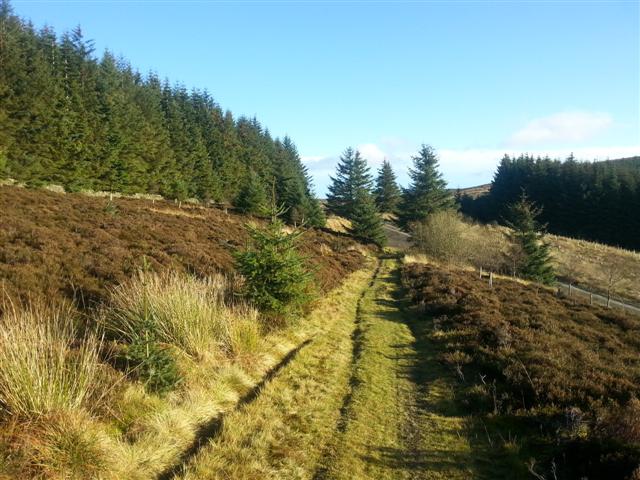 A nice spot for lunch. Looking over to Brown Knowe. Cairn on top of Brown Knowe. Following the old drove road down to Four Lords Lands Looking back to Lucken Head and Brown Knowe. The path up to The Three Brethren The Eildons from my second lunch spot.


A spur of the moment wander up The Three Brethren

Our first Munros of the year in Glen Lyon.