Fulfilling promises is important. Just before Christmas 2020, on a glorious day of vast blue skies and the low red-gold light of midwinter, I took myself off for the day and climbed Ben Hiel (see separate walk report). And from the summit of that very lovely hill I looked across the bealach to Ben Loyal with greedy eyes - so close, so tantalising close, so impressive - and I made a promise that I'd be back to climb Ben Loyal from this same approach. Another Lockdown stepped in a couple of weeks later, and so my hillwalking hopes were crushed, my promise had to wait. But with the easing of restrictions at the weekend, it was finally time.

It's not often I repeat a hill, so it was novel and nice to re-do Ben Hiel with familiar eyes. Parked at the same spot (the long passing place just south of the sheep fold at the top of Loch Loyal), headed straight up on the ATV tracks to the radio mast, and then on beyond following the exact same route to the top as last time.

The light was different, the colours less intense in hazy April sunshine and drifting cloud, the shadows less marked. I couldn't seem to get a good picture, all the grandeur was flattened by this light, pleasantly, but still. Not to worry, I'd bagged my pictures of the Ben Hiel stretch last time around. Bring on the big stuff.

This time, once reaching the summit of Ben Hiel, instead of retracing my steps back to the car, I veered west and headed down to the Bealach Clais nan Ceap and then pretty much straight up the other side. A very direct route, very straight forward, I chomped on liquorice allsorts, watched herds of deer scatter, and enjoyed the sunny solitude as I rattled along. I'd expected to see a figure or two ahead of me on Ben Loyal, I'd hoped maybe they'd give me a clue to a path if there was one, but no brightly coloured jackets could be seen toiling up the slopes so I bashed on with a route of my own making.

All was good till I got to Loch na Creige Riabhaich, when damp cloud started to roll in and my energy levels started to slump. Back in December, I'd been at a peak (relatively speaking) of my own fitness having been steadily building up the hills over a period of months. But now, come April 2021, I was just emerging from a long Lockdown fug of the same tedious, low-level plods day after day, month after month. I was not... unfit... exactly, but I was not quite where I'd left off. Which is a long-winded way of saying that not even half-way out on my planned expedition, and I was knackered and flagging and beginning to realise that maybe I'd bitten off more than I could chew. I chewed on a Snickers while I pondered how wobbly my climbing muscles were feeling, and snickered at my utter failure to match my ambitions to my fitness levels

'Ah well, can't exactly give up here, it's a rubbish point to give up, there's no views, no point to mark any form of achievement, even a half-assed one.' I just had to keep climbing.

It felt like forever, for...ev...er... till I finally crested that ridge between Sgor a' Bhatain and An Caisteal, and when I did that wispy damp cloud transformed into an onslaught of driving wind and rain. Ya absolute b*stard. I've slogged all this way, and this is what I get. I staggered to a big rock, cooried in behind it, and got all the waterproofs on. Ate another liquorice allsort. Tried to get the glasses clear, but it was hopeless, could see better without them in those conditions. There's a top in there somewhere

Stuck my head above the parapet again to try and gauge my exact location and... suddenly felt thrilled. The exhileration of the tops kicked in. Isn't this exactly what I climb for? My leg muscles magically healed themselves, my energy reserves bounced back to maximum power. The weather rushed past, wheeching rain and cloud and fleeting glimpses of incredible views, of vertiginous drops, of a ridge arcing away from me that cried out to be walked. All of this was good, all of this was exactly what I wanted. I took pictures, the weather cleared, I ate ham rolls, the light shifted, I glugged isotonic raspberry drinks, the views opened out in every direction, my glasses dried and let me see again. And then it all opens out

I pottered around An Caisteal enjoying the moss and the rocks and dithering about my next move. 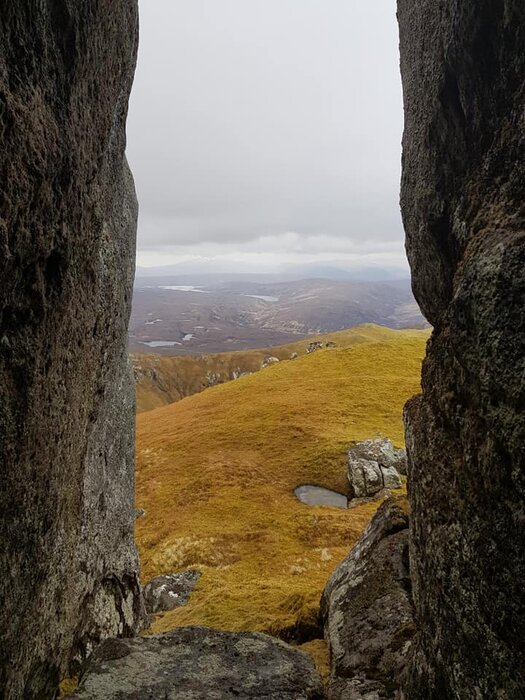 From the crevices of An Caisteal

But although I was feeling fighting fit and fabulous at that exact moment, I knew it wasn't real and wouldn't last. Much as it frustrated me, it was going to be a long walk back to the car, with a bit of ascent partially up the slopes of Ben Hiel required (dammit, who planned this route), and I was running out of liquorice allsorts. I was going to have to head down.

I desperately wanted to carry on, but today was not the day. I will just have to come back another day.

And that's another promise. The path leading to Beinn Bheag A ridge I'll return for

Cnoc nan Cuilean, a hill of song and burbles