I should start by telling you all the sequence of events that lead to this absolute gem of a hill being named “Ben Betrayal”. Sadly it is not as dramatic as the name suggests, and stems from a quickly planned trip up to Beinn Dorain in the summer by myself and my usual hill walking companion, while our good friend Dale languished in the awful conditions of an all-inclusive hotel in Egypt. Note my lack of sympathy! It turned out that he had wanted to climb Dorain for as long as he could remember, and on his return, finding out that we had in his words “betrayed him” by doing it ourselves, the name was born.

However, today was going to be the day the name could be discarded and harmony restored, a promising gap in the weather combined with a well-placed day off work for both Dale and I meant the planning was completed over the weekend and we were ready to go on Monday morning.
Bright and not so early we hit the road from Glasgow just after half nine and a great run right through Glasgow and up Loch Lomond-side saw us leaving the car park at Bridge of Orchy station not long after eleven. 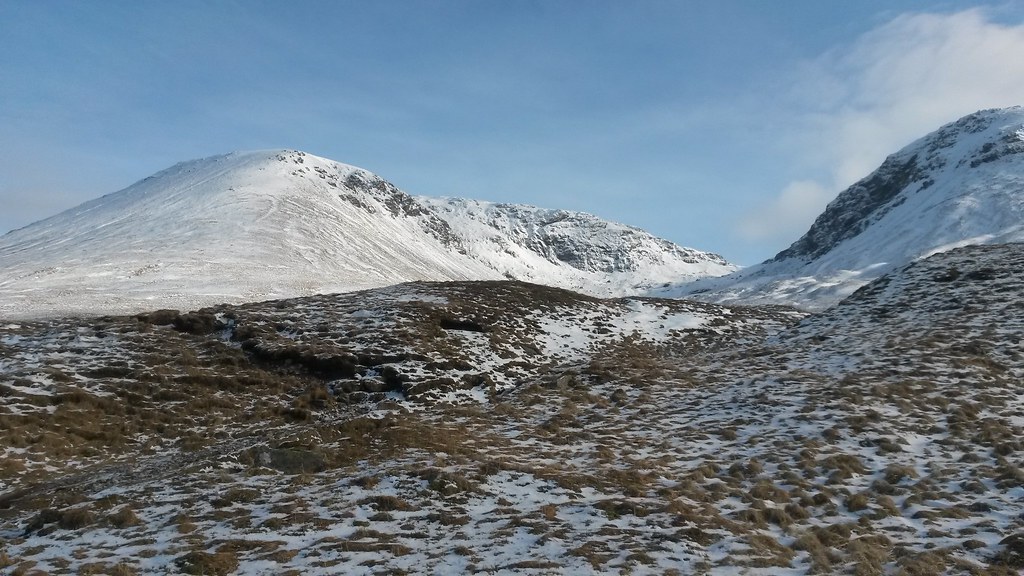 1 The task at hand

This is the part of any walk I find most monotonous, worsened particularly in this instance by the constant taunting of what lies ahead. The path, for the most part until we reached the steeper section, was actually easier than trying to attempt during the summer, due to the (many) boggy sections lower down being frozen over. This was a bonus going up, however we would pay for it on the way down, the icy patches causing us to find a creative route back to base! 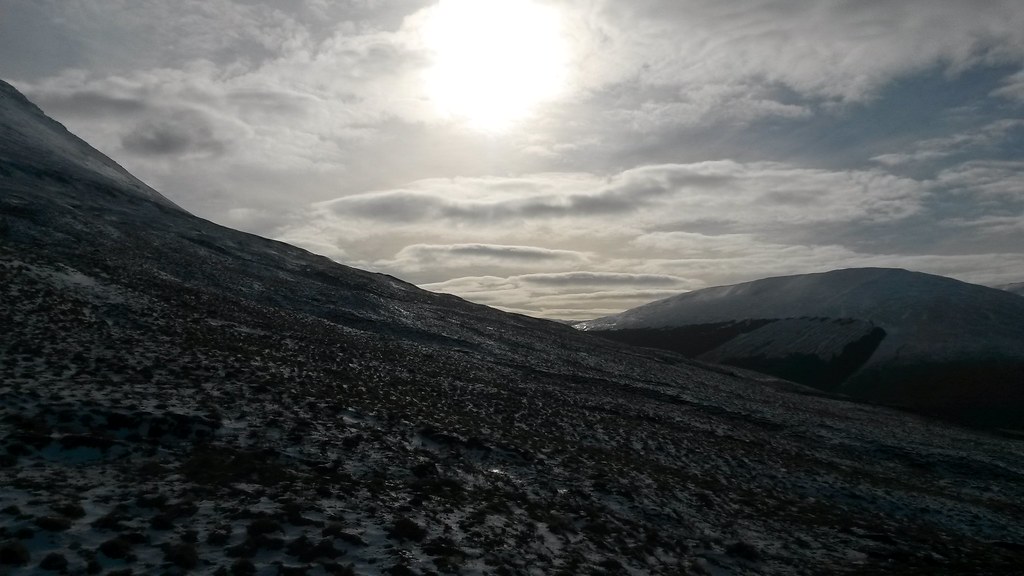 
We continue to amble our way up the slope, the ice giving us a nice excuse not to race up this first section, and giving us time to warm up into our stride. Dale's last hill was well before the end of 2015, his last munro a while before that. I am slightly better prepared for the trip, having a couple of trips up Dumgoyne and a snowy trek up the cobbler in the preceding few weeks to help keep the legs moving. It certainly doesnt show, Dale's gangly frame and long legs tend to give the impression he hovers over the ground! We cut higher and higher into the corrie and were rewarded with spectacular views over the Black Mount and towards Stob a'Choire Odhair and Stob Gabhar. 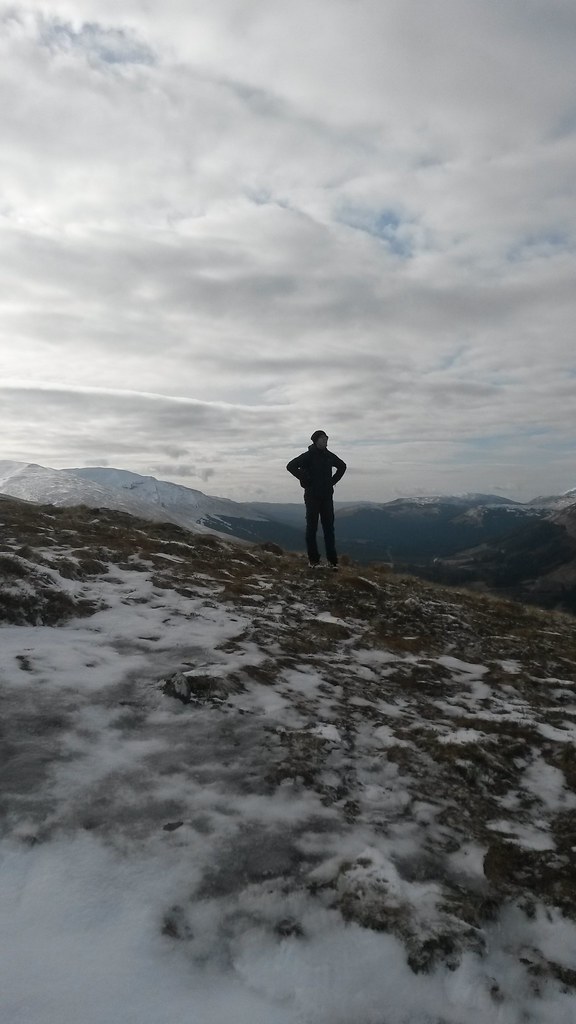 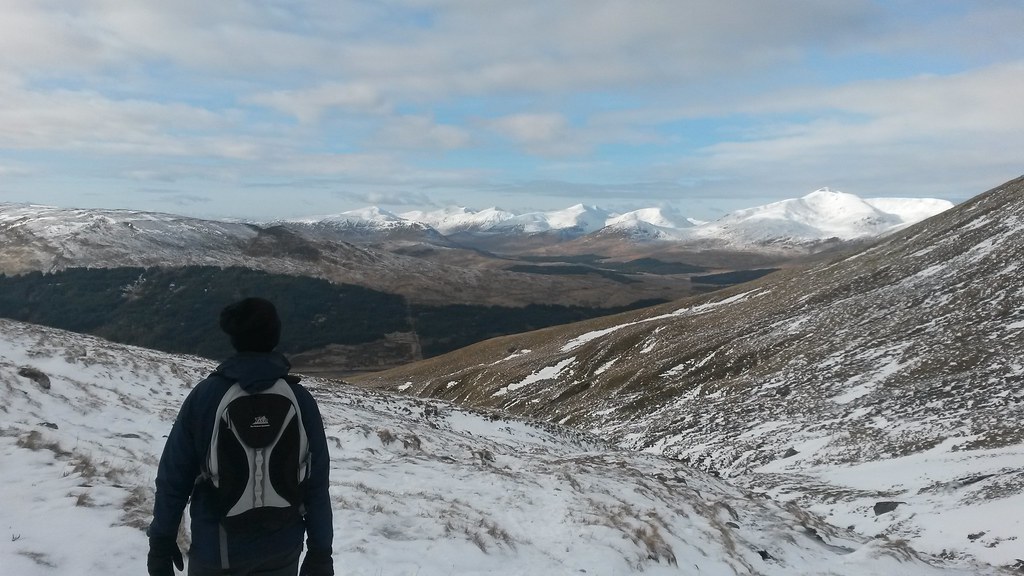 4 and deciding on a more pleasant view

As it was all going so pleasantly it was only a matter of time before the first (and thankfully only) calamity of the day. As we went to cross the frozen Allt an Dothaidh we chose different paths, with markedly different outcomes. As I looked for some boulders protruding out of the ice to hop across, I turned to see Dale about to step onto the snow covered ice over the stream, his words were "this bit seems fine", as he promptly completed a fine slip straight onto his backside and slowly started to slide helplessly down the slope!

In my fits of laughter I couldnt get my camera out quick enough, and sadly could only snap the end of his desperate recovery! 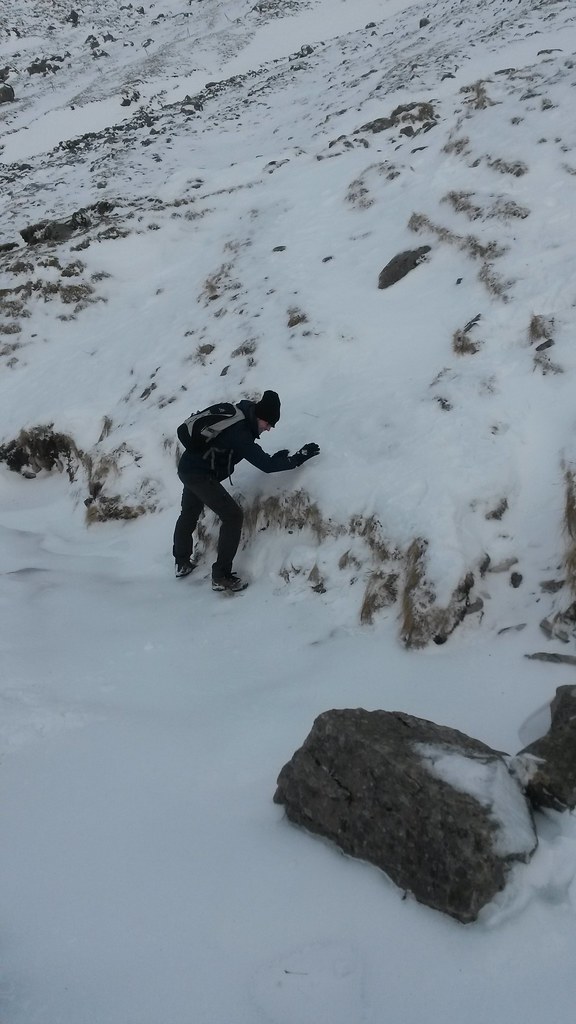 5 His words were, this bit looks fine..!

The ensuing laughter propelled us both up the hill and into the great bowl of a corrie below the bealach and from here we could see the usual path and two more walkers who gave us a nice scale for the next photo! The snow here was thin and in several spots dusted over patches of ice on the main path, making it all the easier to charge straight towards the base of the next slop and avoid the slipperiest bits all together. In the second picture you can only see one of the gents highlighted in the photo before, I have no idea where he went! Perhaps to the facilities around the back of the large rock? 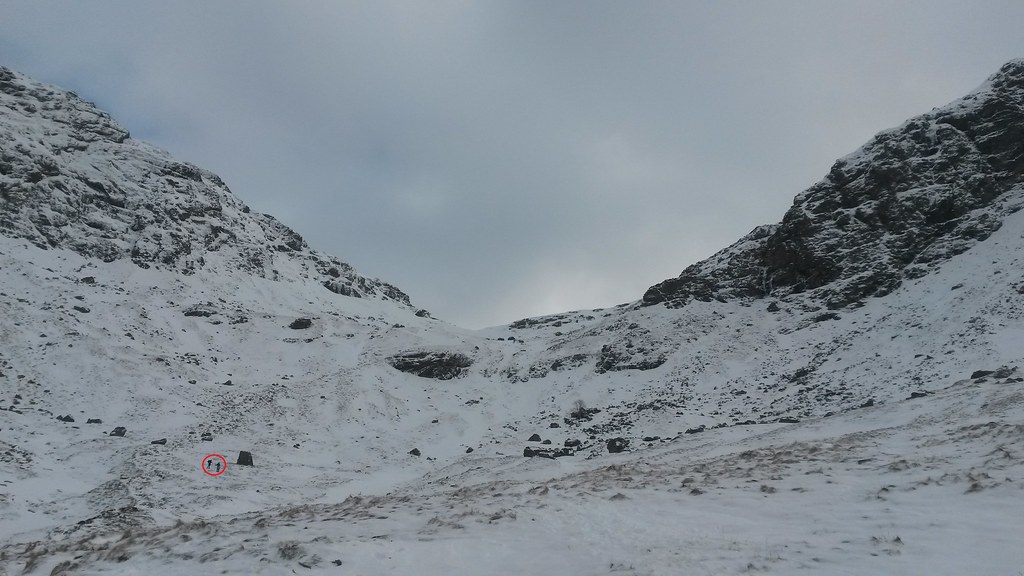 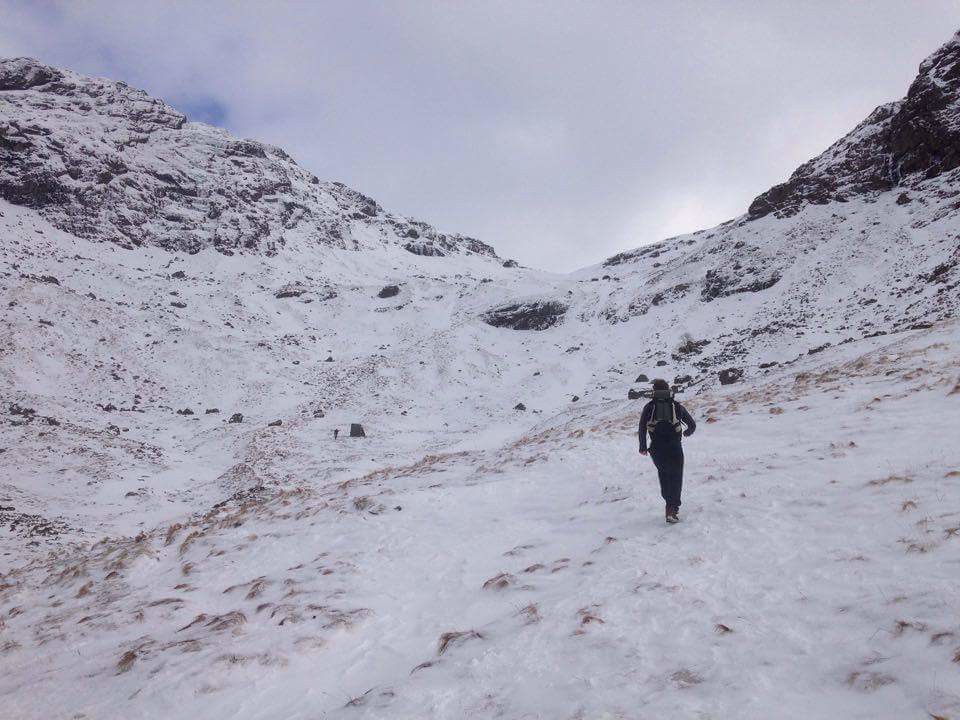 As we caught up with the two gents in front of us we caught a little glimpse that we might not just get as fantastic a day as we hoped, a stray cloud causing the sun to dim substantially for a minute or two, however it did make for an excellent "moody" photo looking up towards the ridge! 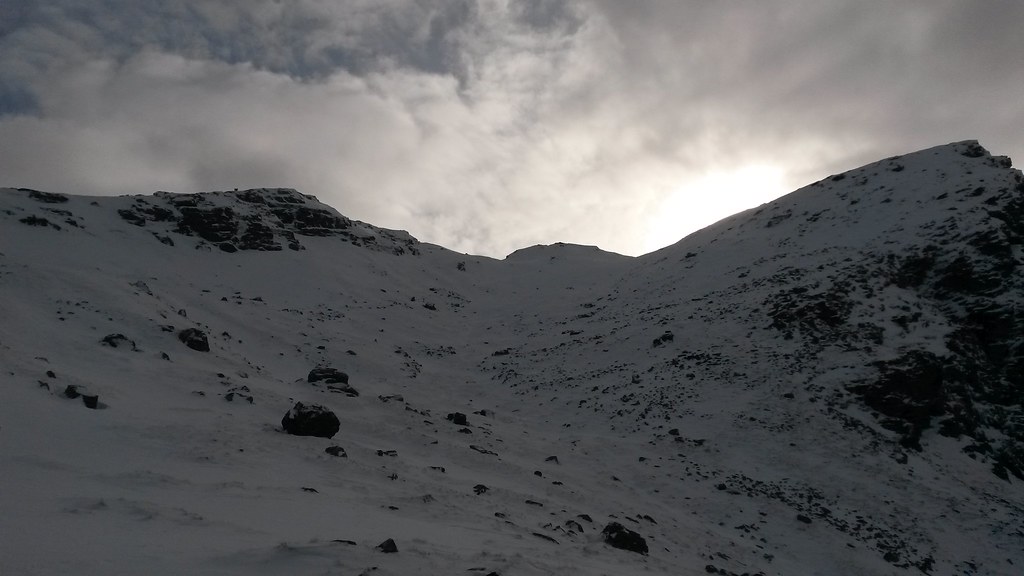 9 Concerned how conditions will be on the ridge 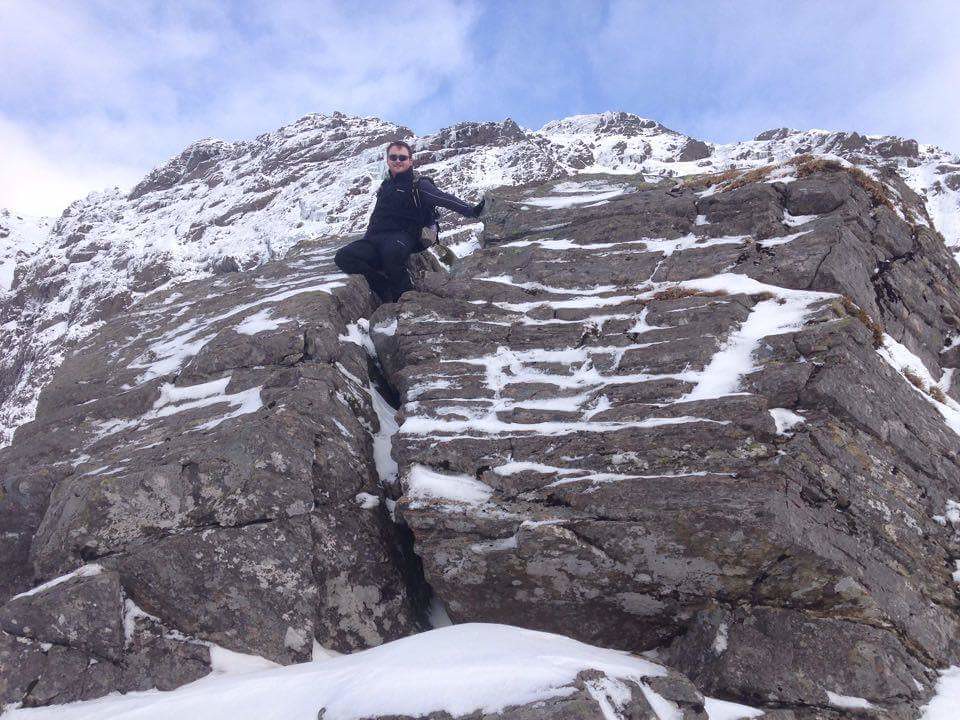 10 The geologist among friends

Another quick stop by the large boulders for a drop of water, and of course a wee climb on them meant we had slipped back a bit from the folk in front I was now intent on catching. We quickened the pace a bit and caught up with them at the top of the bealach, just as they sat down to some lunch. We were tempted to stop here, but our casual pace so far lead us to take advantage of the wonderful lack of wind and push up the next hundred meters or so from the bealach, and take in the even better views. 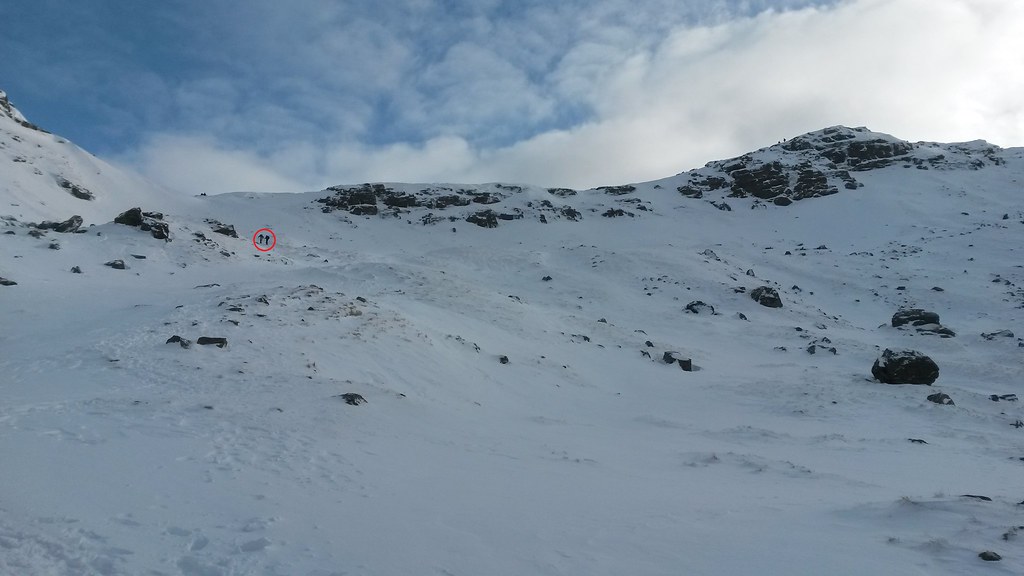 8 Past the steepest section 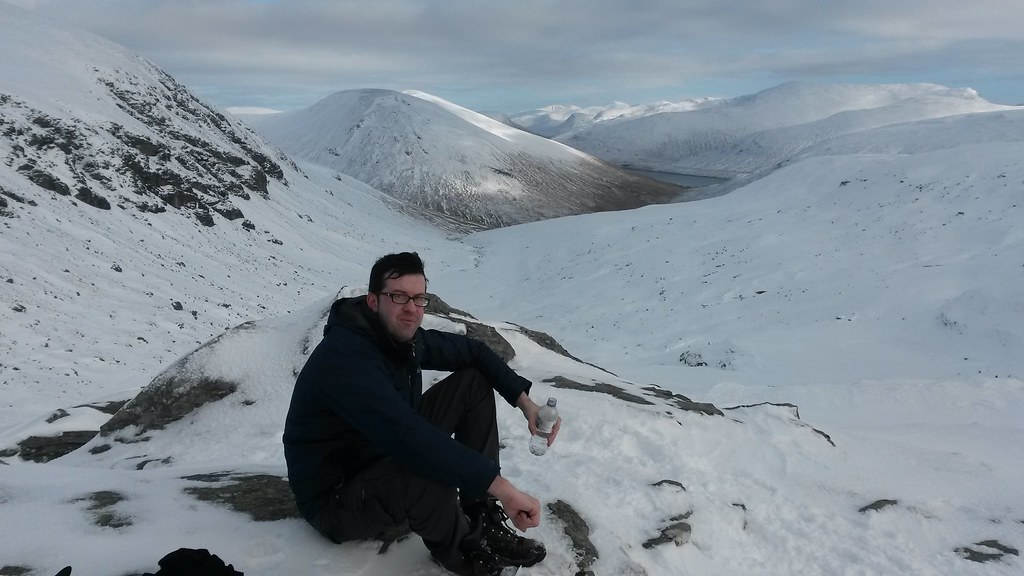 From here on we knew the hardest of the climbing was over and we had a pleasant walk ahead of us, enhanced by the quite astonishingly beautiful conditions. The difference from seeing the same landscape on a dreich summers day is incredible. In the past we have been fortunate to experience spectacular, sunny summer days on the likes of An Teallach and in Glen Coe, but the addition of the snow and sheer beauty of the 180 degree (plus) view challenges any of those; the Crianlarich Hills to the south with Ben Lomond beyond, right out towards Ben Cruachan, further up over the Black Mount and just catching the edge of Rannoch Moor, topped off by a very clear looking Ben Nevis, made this one of my most memorable vistas. Dale, having not had the experience of this previously, was feeling both elated and vindicated that he had finally conquered Ben Betrayal, and in some style! The pictures taken simply dont do that wonderful landscape justice, despite our best intentions, but I put them up anyway, otherwise it would just be me wittering on! 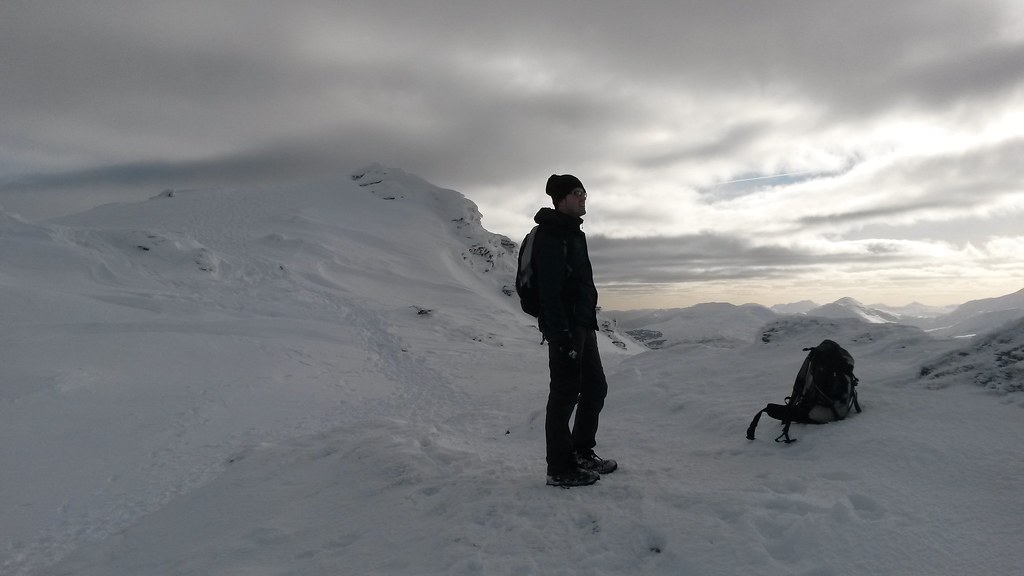 12 Heading up to the ridge 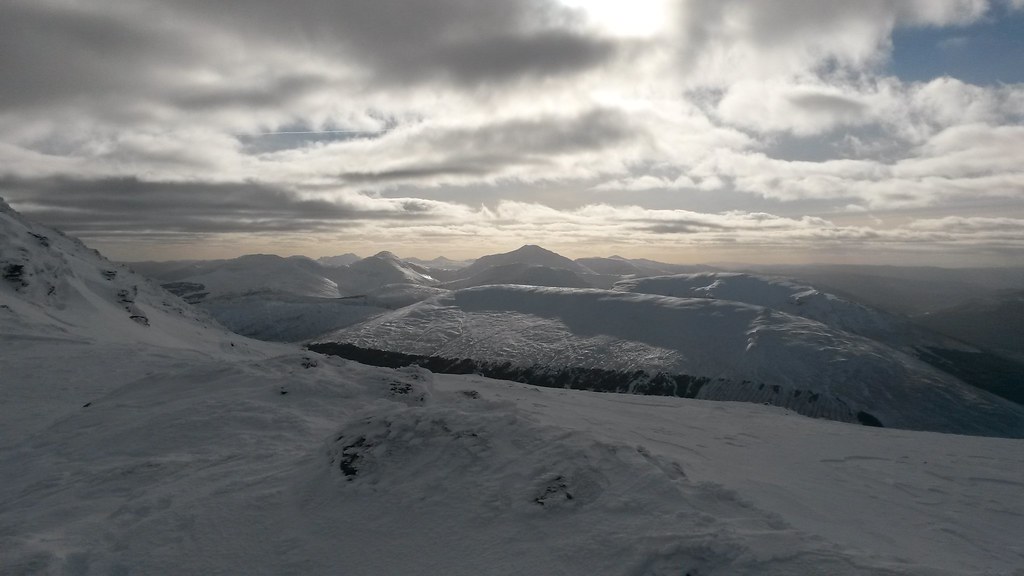 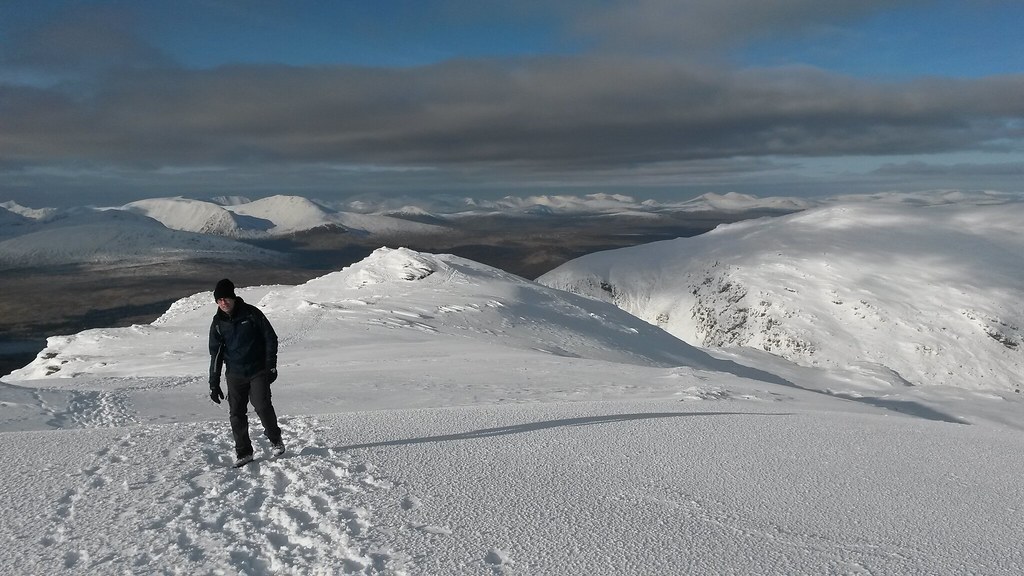 As we clambered up the last of the slopes on the ridge towards Carn Sasunnaich, we passed several groups of content looking walkers on there way up and down, including one couple with a tiny little dog who made the trudge through the snow look easy,

impressive in snow about the same height as him! He was doing a double shift going between his two owners making sure they were ok and befriending us when he was after a heat.
From here on the views open out even more and complete the all round viewpoint by looking over towards Glen Lyon, Ben Lawers and down towards Stuc A'Chroin, again my words and pictures dont nearly do justice to the sight. 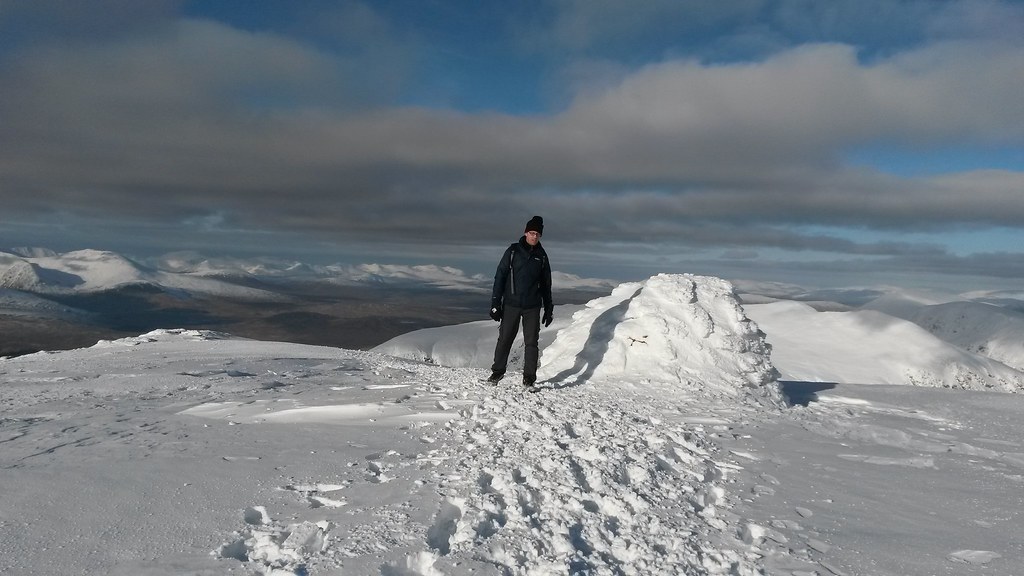 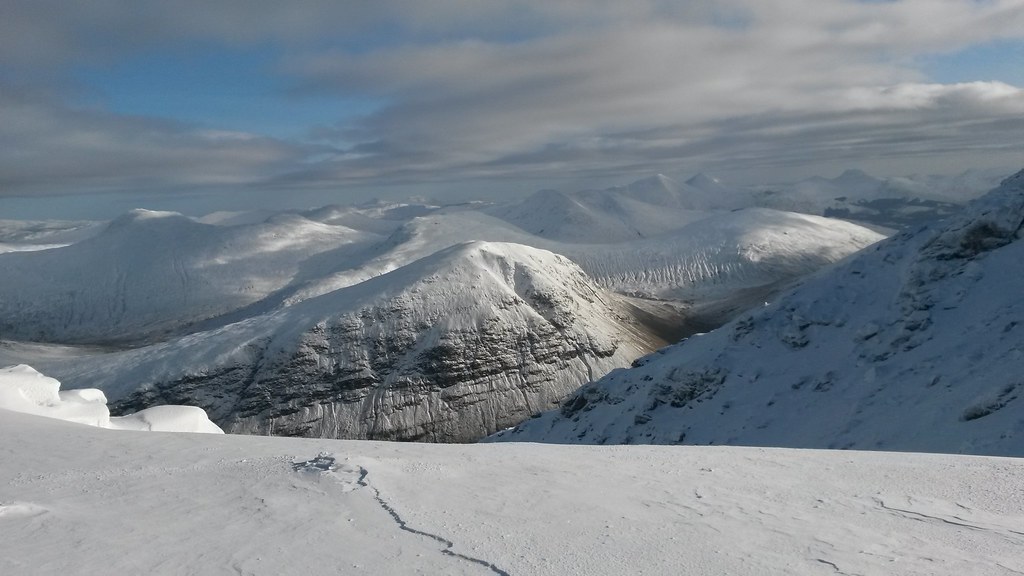 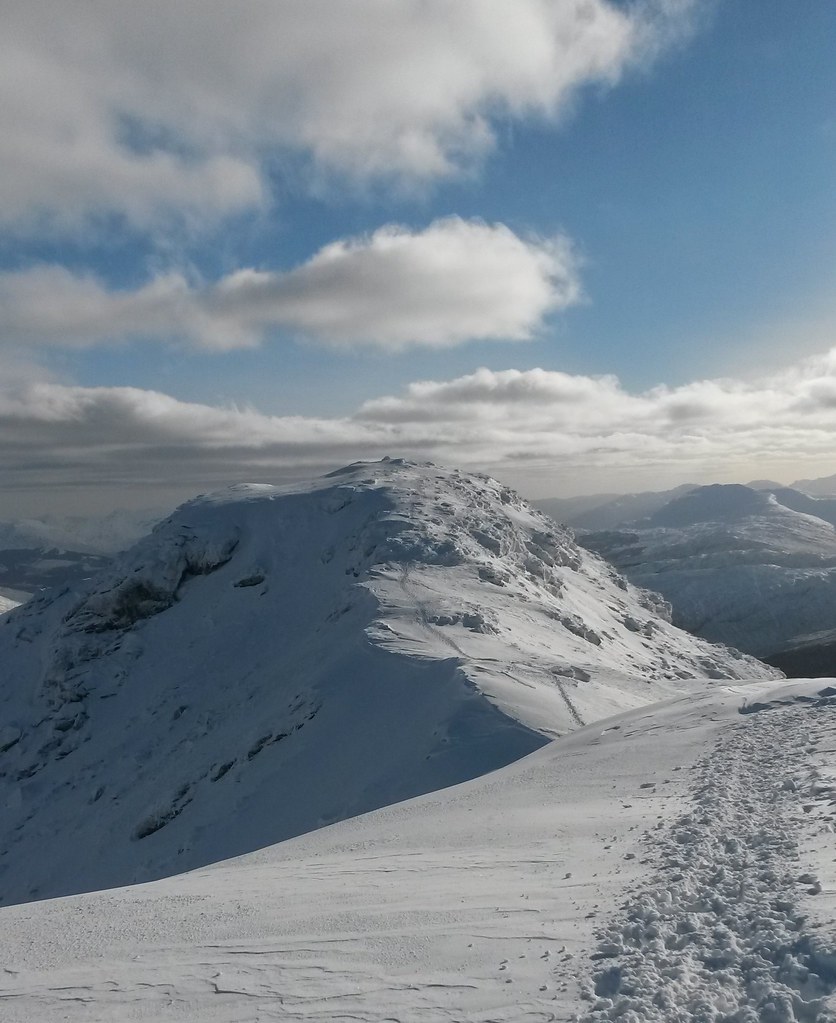 17 Last push to the true summit

From here both the picture and the initial impression of the final hurdle appear far worse than they actually are, and less than ten minutes later we successfully completed our ascent of Ben Betrayal, now able to be returned to its rightful name of Beinn Dorainn! Having the summit to ourselves, on a day without even a breath of wind was truly special, and we made sure to savour it. A quick text to the aforementioned joint villan of the piece and cause of the name alteration (sadly languishing behind a computer and piles of code back in Glasgow) and the job was complete. We remained on the summit for a good twenty minutes or so wandering in all directions, trying to absorb the views all round and down into the valley below, watching tiny cars travelling up and down the A82. 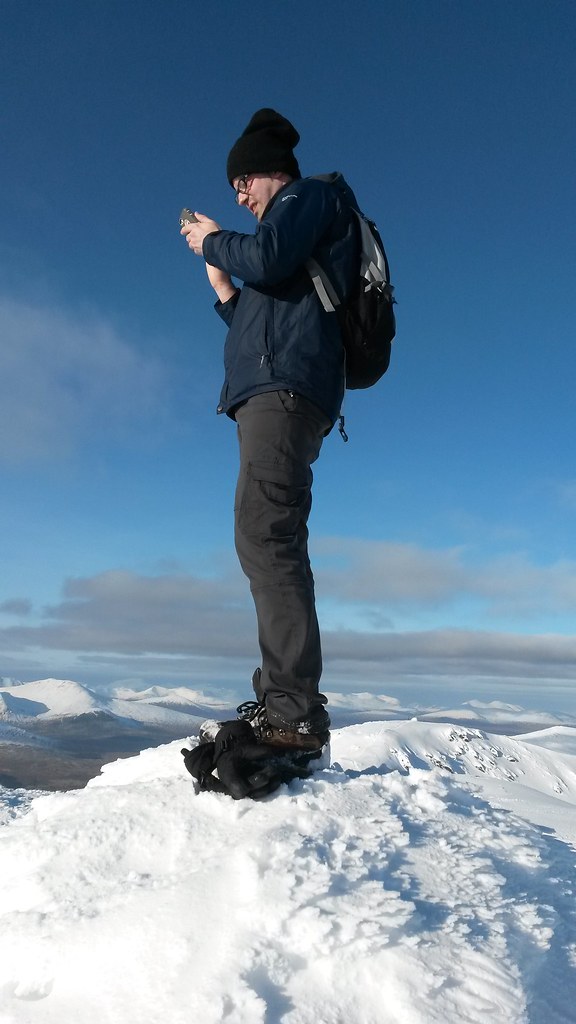 18 Texting the cause of the name Ben Betrayal 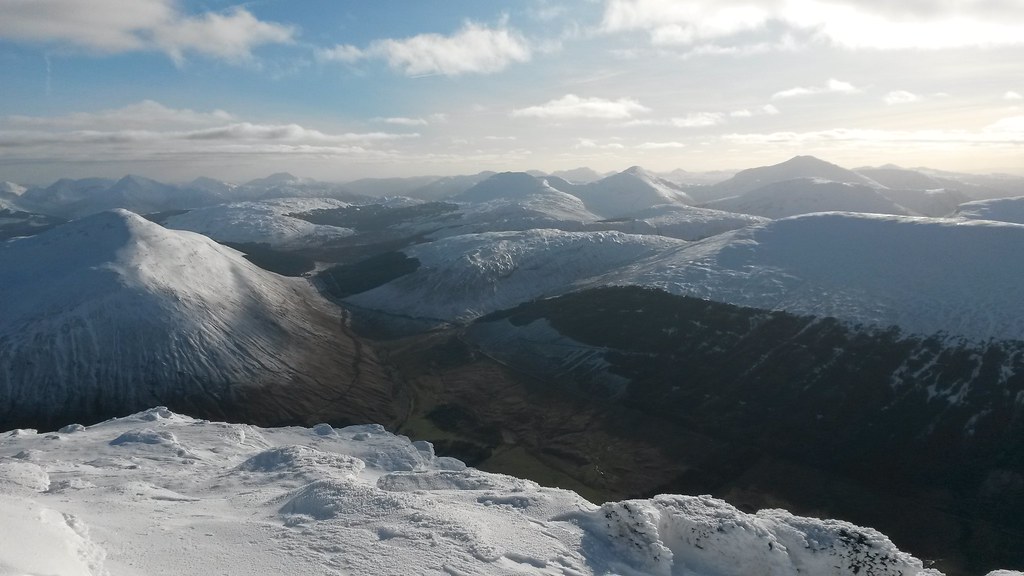 19 View down the valley Ben Lomond in distance 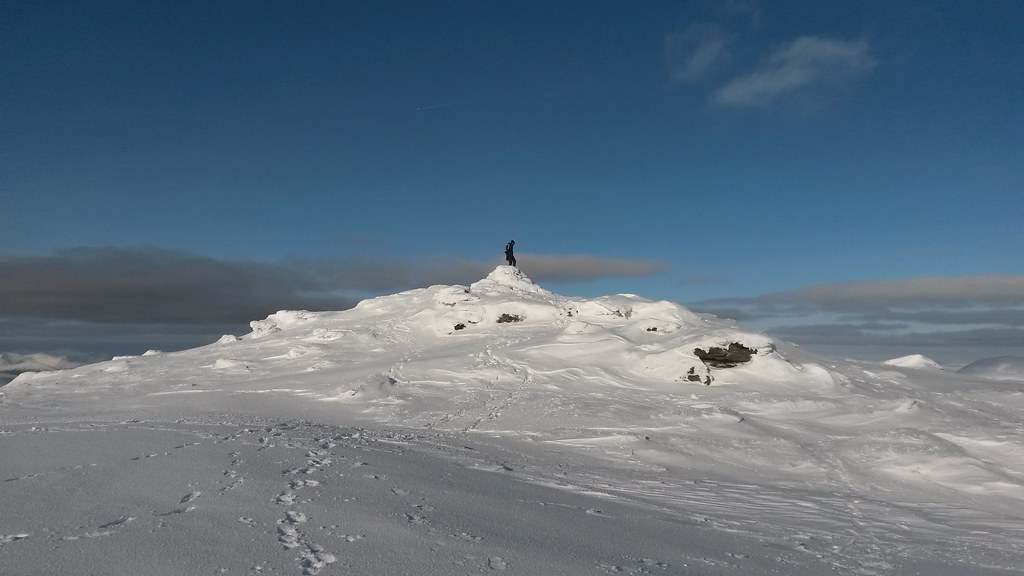 20 He stayed there for ages 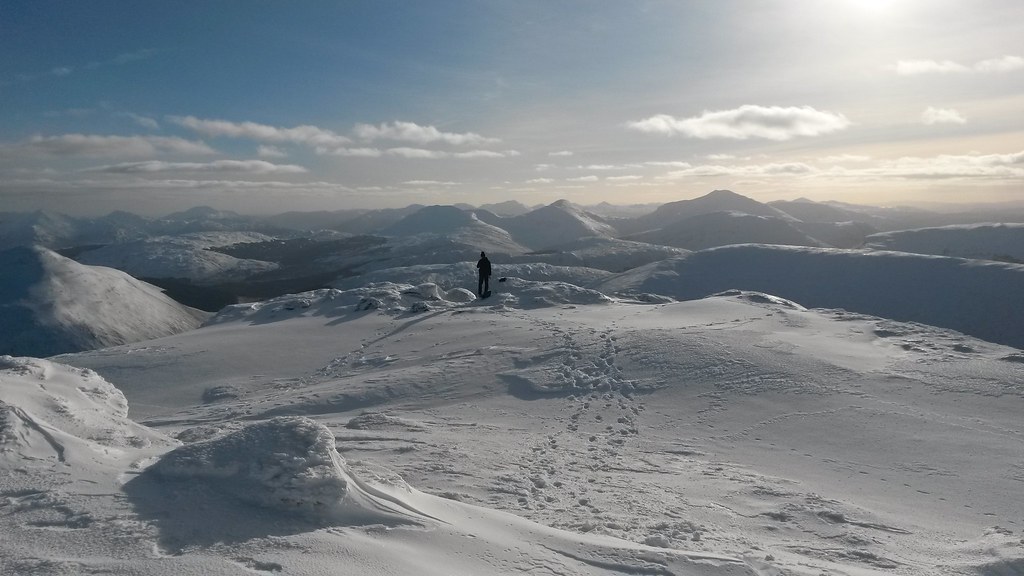 21 Mesmerised by the cars

We got to the summit around quarter to three, and left just after three oclock, not bad timings considering the snow and our late start. Having endured so much clambering through soft snow on the way up, going back down proved much more enjoyable, the foot or so of soft stuff helping us to gracefully "bumslide" (technical term) our way back to bealach.

Back on to the icy path once more on the way back to the train station, no major problems except the slow pace starting to make our legs tighten up a bit, until we arrived back at the spot of calamity Dale's fall earlier in the day. With renewed caution... he proceeded to nearly do the same thing again!! This time I had the camera ready and captured a few of the more graceful moves as he kept his balance, just! 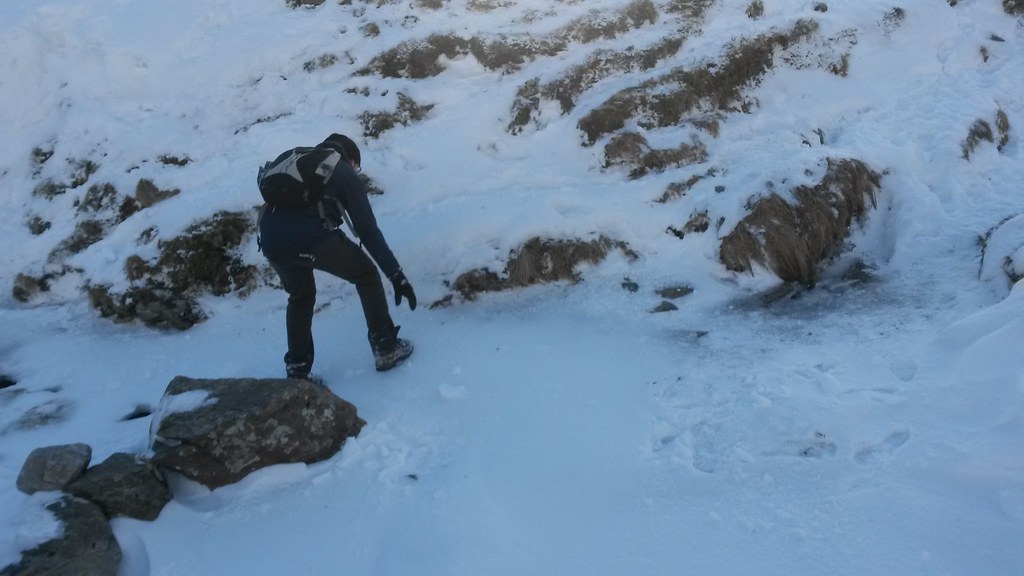 22 More trouble at the same spot on the way down

Down to the car just as the light started to fade, thoroughly satisfied with our short but amazing day on the hill, we made it from car to car in just under six hours, quicker than anticipated given the snow and our relaxed pace on the way up. The hardest task of the day was resisting the temptation to head into the Bridge of Orchy Hotel for a pint, instead heading back home for a well deserved dinner. All in all a great day that we wont forget in a hurry! 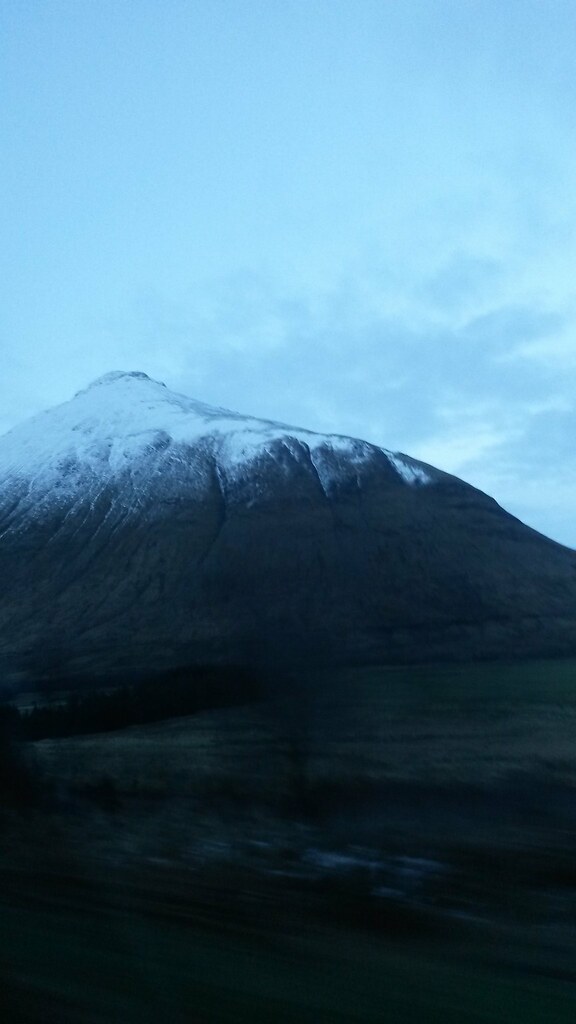 23 Homeward
Click to mark this as a great report. Register or Login free to be able to rate and comment on reports (as well as access 1:25000 mapping).