Decided to post this as my first TR for Walkhighlands as the last poster of these hills never included pics so I thought it would be nice to have some pics.

Friday 2nd Feb 2018
Leum Uilleim and Beinn na Lap
18km 5hrs 40 mins Warm,sunny,wet and boggy on moor,snow melt underneath the snow,some drifts no need for crampons,more consolidated the higher up you went.

Up at 6am breakfast,bus to Glasgow,8.20am train from Glasgow to Corrour well worth the £24 return.
Lovely train journey on the way up,sunny and clear,views were amazing,arrive at Corrour at 11.25am.
All the times I had done Leum Uilleim before I always thought there might be time to fit Beinn na Lap in,today was the day to find out,though I thought I might be pushing it a bit with the snow being around.
Both hills were done by the normal straight up and down routes.
Off the train and Leum Uilleim was looking very nice,a man who came off the train had been here the day before and said the snow had receded a good bit.
Followed the rough track which was covered in snow across the moor with a good bit of zig-zagging to avoid any deep bog which was lurking underneath the snow,one or two minor close shaves.
Had to break trail as no one had been here,hard work at times.
As the ground got steeper I had to bob and weave to avoid some deep drifts.
The south west ridge to the summit was a joy walking on firm snow and the views were very nice,was even sweating in the warmth of the sunshine.
The approach to the summit was in low cloud so no views,had some lunch.
It was just a case of retracing my steps back to Corrour station with one slight mishap when my right foot decided to visit one of the hidden bogs,one soggy right foot.
Next was to give Beinn na Lap a go,I wasn’t too bothered if I reached the top or not,it was just to pass the time away while waiting for the train that was due at 6.20pm.
Just the normal route from Corrour along a snowy/icy track to the hillside of Beinn na Lap.
Got chatting to a German lassie who was sitting on some large rock taking in the views,she was staying at the hostel and enjoying every minute of it.
Same story as for Leum Uilleim avoid any bog,well try and not get the left foot wet as well.
Time to set the trail again.
Higher up it was a case of avoiding the deep drifts of snow,boy was I feeling it now.
Once I was on the north east ridge the walking got slightly more easier due to the snow being more firmer.
Higher up the cloud had rolled in and no great views were seen from the summit.
Right foot was starting to get quite cold as it began to chill down a bit.
Retraced my steps back to the station.
Had about a hour to wait for train when another couple appeared,it was quite cold standing about waiting on a train and so we engaged in some strange excercises ,running round the platform anything to try and stay warm.
Train appears out of the dark and its lovely and warm,finds a heat vent where my right foot could get the benefit of it.
Packet of peanuts,a miniature of Bowmore whisky and a small can of Innis and Gunn £11 it was worth it after the day I had.

Views from a train. 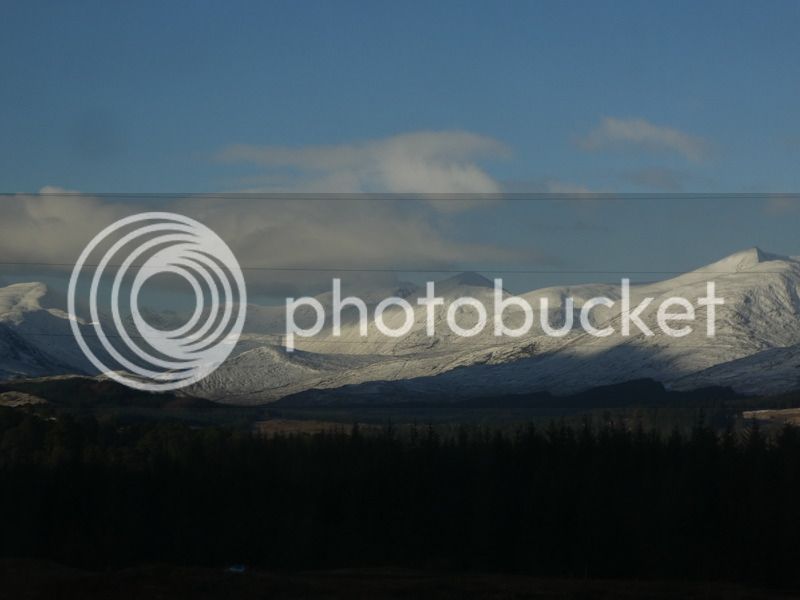 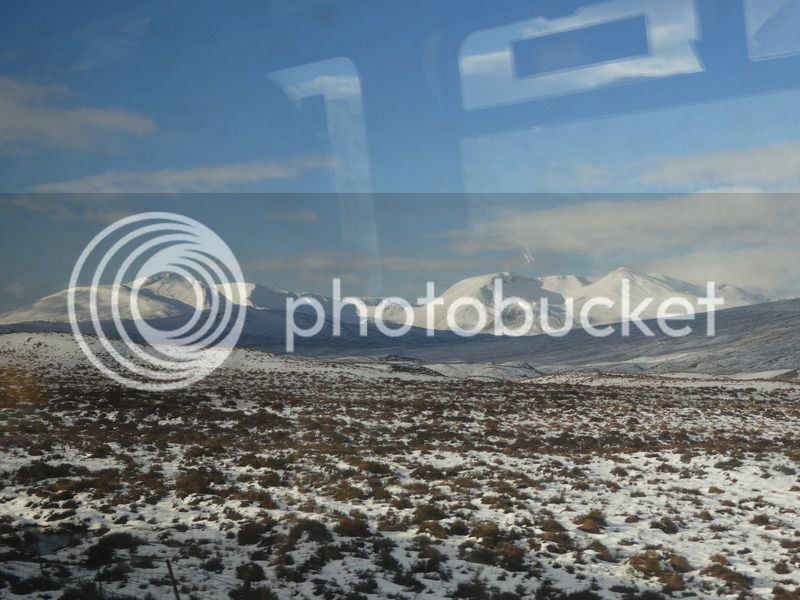 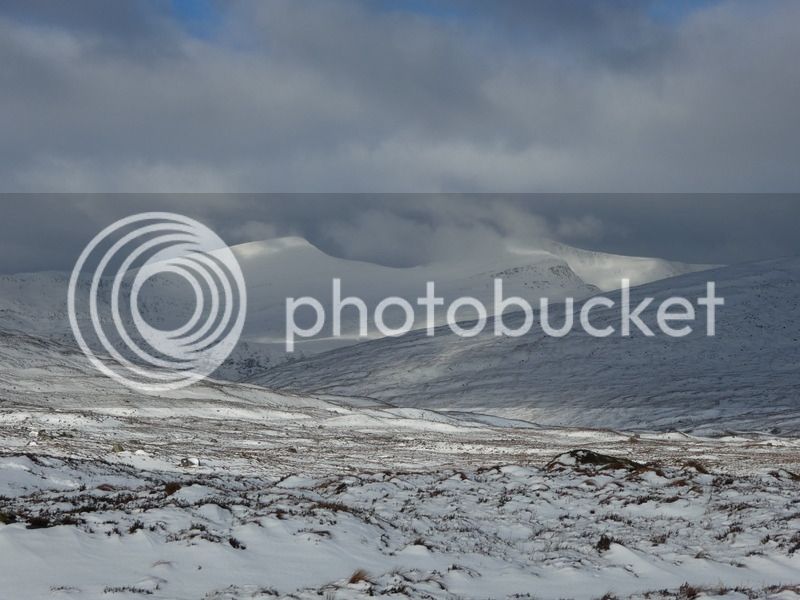 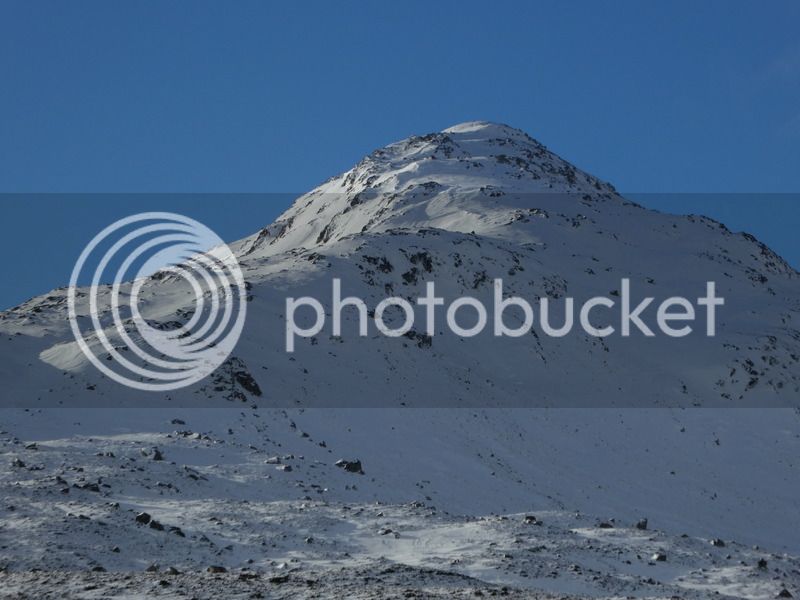 Looking across the moor to Loch Ossian.

View towards Bridge of Orchy Hills and Black Mount. 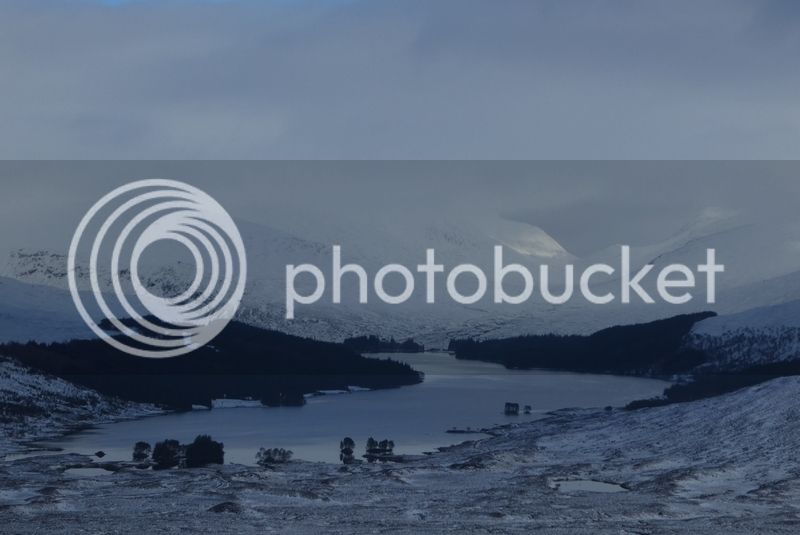 Pano of the Grey Corries,notice how small Stob Ban looks.

Across Rannoch Moor towards Black Mount. 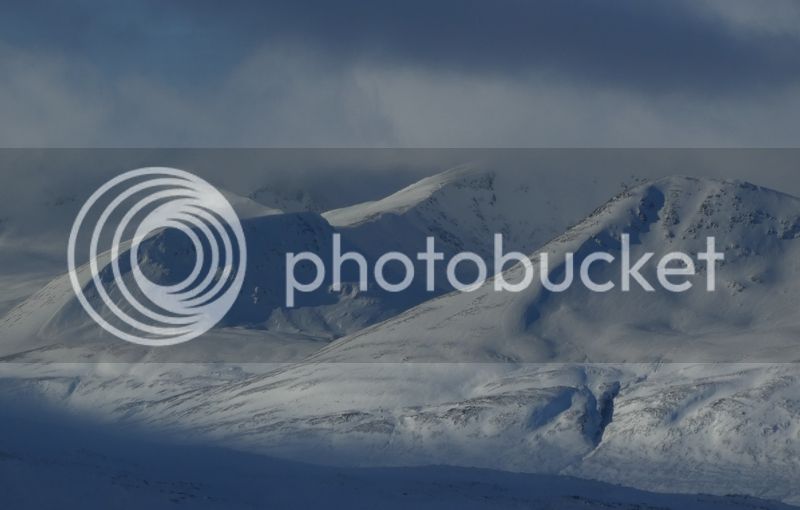 Cloud starts to roll in near summit.

Across the moor to the hills of Glen Lyon.

View down ridge to Beinn na Lap and Loch Ossian.

Across moor towards Stob Coire Eassain.

Time for Beinn na Lap.
View down the railway line towards the Grey Corries. 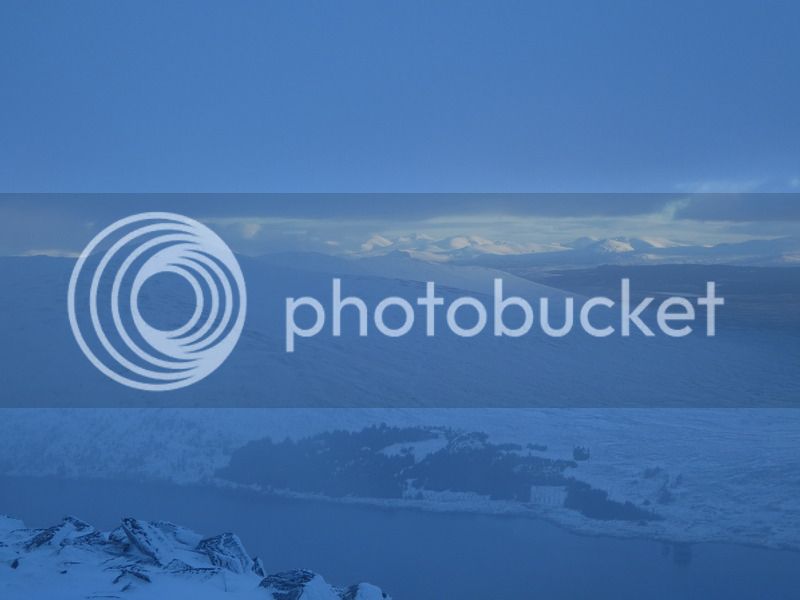 Looking across to Carn Dearg and Meall na Lice.