Delivering trees to Spean Bridge last night so headed up to Morvich to walk out to the Falls. I think we may have done this as kids but no recollection of the walk, just the name.

Parked up at the cemetery car park under Sgurr nan Airgid to walk in the upper road to Strath Croe. Sent a wee message to Margaret and Brian across the Glen to say I was in the area and hopefully meet up later for a cuppa.

Headed off around 9:50am in the drizzle that was to follow me for much of the day.

Good views down to the Kintail Affric way along Glen Lichd, Beinn Fhada and A Ghlas Bheinn both looming large. 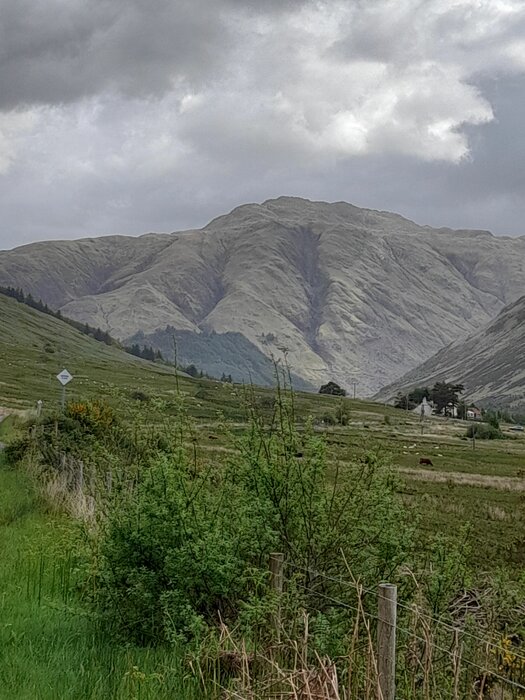 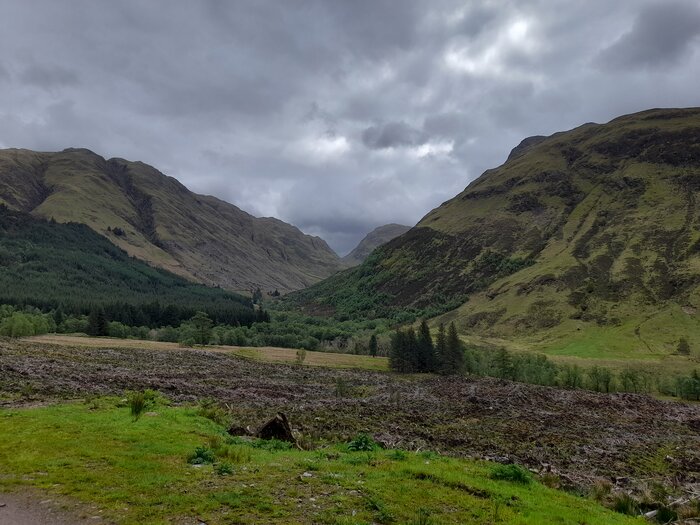 Gave a quick wave to MacBrunchie towers but don't think they would see me. Looking over to the MacBrunchie Homestead

Reaching the junction for the private road, up to Ruarach and Lienassie Farm, I spotted the car park for Falls of Glomach,, heck, could have saved myself half a mile lol.

Up the track which is open to pedestrian and bike access only, passing Ruarach, a holiday home and then on to the farm. From here, the Morvich campsite is all but hidden in trees so you still get the sense of a fairly quiet valley floor. Open pasture fields full of sheep and lambs slope off down towards the Abhainn Chonaig river the track passing some old sheep folds before the heading into the plantation of Dorusduain Wood.

Now, I'm kinda prone to having outer monologues when I'm out on my own, ok ok,, I talk to myself

Just as I was twittering on, I heard a noise behind and turned to see 2 MTB riders coming up the track, I apologised for them catching me talking to myself and assured them they were lucky I wasn't singing, yes, I do that too.

Had a few meetings with them in the next 20-30 mins as our paths crossed in the trees.

Nothing much here but to keep going. Passed by a recently felled area of trees on the right with a wee empty house at the bottom,
There is the tiniest wee square on the map so assuming thats it and marked as Gob na Roinne. Further up the track, there was one junction which has a track going off to the left, intuitively, feels like you should take it but thankfully, another wee wooden signs keeps you on the right (literally) track. I was a bit concerned about midges here as it was damp and forested but the tracks are actually open and there was a bit of a breeze so the smidge was enough (I'd left my net in the van

Reached the end of the broad track and had a good chat here with the bikers, a photographer from Skye and his good lady who visit Morvich regularly on their bikes. Put the world to rights, well, discussed the negative impact of NC500 lol This was the end of the road for them as the route now crosses the junction of 2 burns and on up a narrow stalkers path.

This is also the point I had descended A' Mhuc, one of the big fingers coming off A' Ghlas-Bheinn back in 2016. At that time, I had considered turning right and taking in the Falls too, glad I didn't!

Crossing a wooden footbridge with had a strange brick and rendered wall leading to it on the forest side, strange as in it seemed a tad unnecessary in the location.

The wee stalkers path initially climbs steeply above the bridge but soon heads along the hillside and contours round the returns of many burns descending into the Allt an Leoid Ghaineamhaich. Current and recent rainfalls had filled the waterfalls coming off Meall Dubh behind A'Ghlas Bheinn. 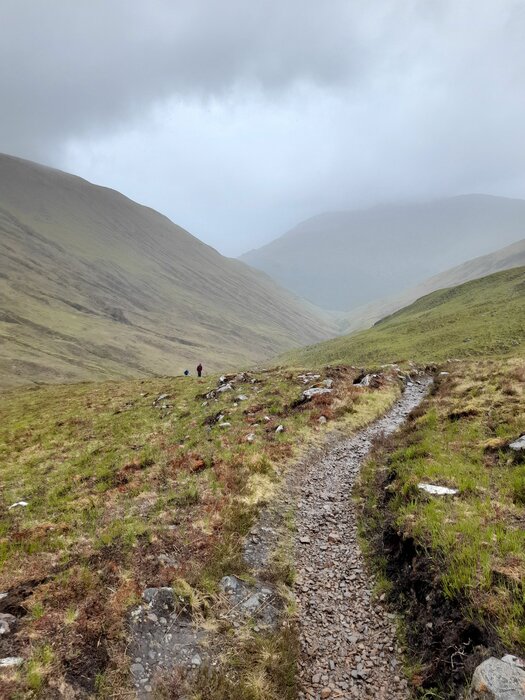 The height gain here is very gradual so nothing challenging as you veer slightly North and up on to the Bealach na Sroine which opens up to your left. It was precipitating persistantly at this point (peeing down) and the low mists hung around Carnan Cruithneachd to the North. The path to the Falls just keeps on going off into the distance. There are some very wet and boggy bits. Other parts where the path was just a stream bed and a few marker cairns at a burn junction show where another path heads east as I turned more North East to the last section before the Falls. 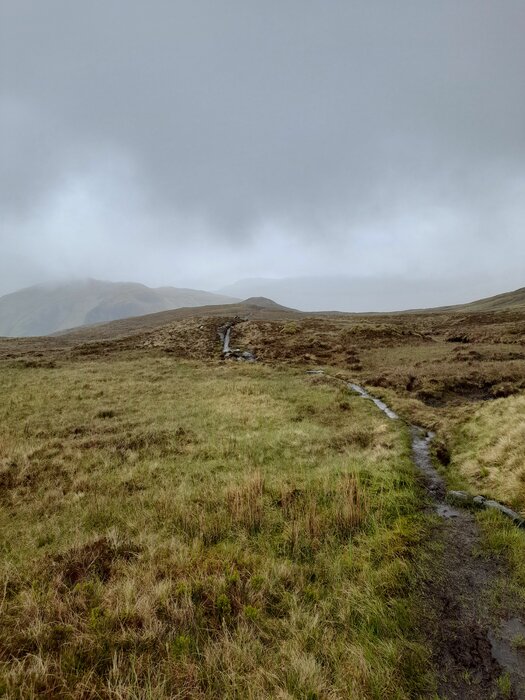 The WH route talks of the drop into the gorge, but I wasn't expecting the amount of 'down' that meets you. For some reason, I envisaged the Falls to be dropping off the same ground I was descending and began to wonder where they were as I got lower and lower to the Glen floor. Its a steep descent, losing some 200mtrs in height in under 500mtrs.

I could see the Allt a Ghlomaich ahead which seems to form just a little further up the Glen where the Allt Coire Lochain and Abhainn Gaorsaic meet to become one. Glimpses of white water on the edge to the left were a clue to where I was heading.

The last hundred metres or so are VERY wet, not boggy, just a lot of ground water but if you stick higher where the rough path heads back West, it's not so bad.

Headed down to the white water and just WOW!

You only see the very top of the Falls here and again, due to recent rains, there was a LOT of water gushing over the edge. First glimpse of the falls

I met a couple who had arrived behind me and had a quick chat as the Mrs went off down the path and the Mr stayed higher up.

I edged down a bit further, taking careful peeks over the edge, revealing more of the simply incredible sight below. The volume of water and the height really are not comprehensible from pictures but to see right to the bottom and realise how far away it was just has to be seen, The water bounces off the Jurassic Park like chasm walls and twists right then left before pouring down under the steep walls of the Coire. This must be seen when the water levels are high.

Pics of the top half make more sense when you see the wee people at the top. Got some sun here too but not for long 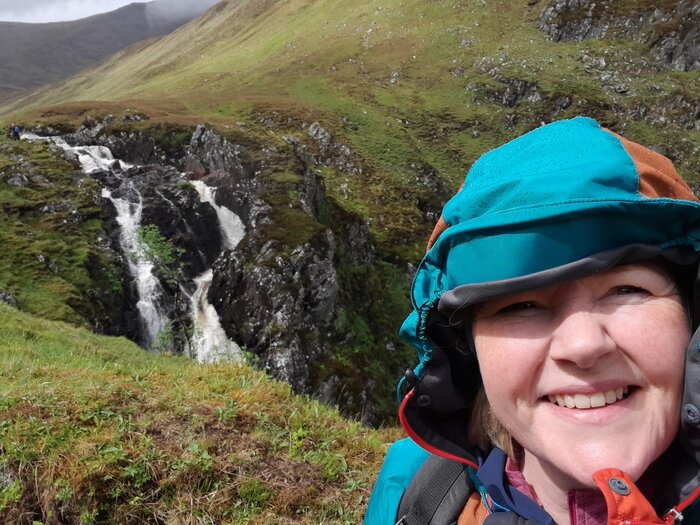 Sat on a wee ledge under the top of the Falls to have some lunch and a drink before heading back up, using the slightly drier high path to reach the bottom of the steep ascent back up to na Sroine.

It had taken 3 hrs to reach the falls, now 13:30: and I wanted to cut my return journey so I pushed myself up the track, passing about another 8 or 10 people in various groups heading down. The return weather was pretty much the same, rain on, low cloud, bit of sun, higher cloud, more rain. 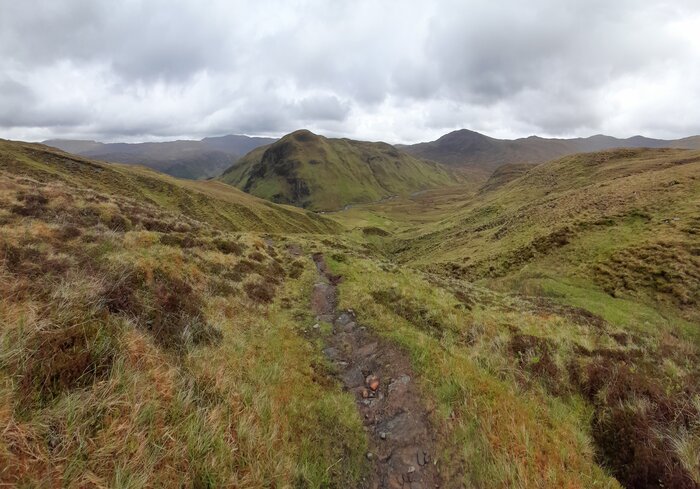 A clearer break on the way back.

Passed over the Bealach and happy to see the uppermost trees of the woods as I again contoured round the wee streams and down to the footbridge. 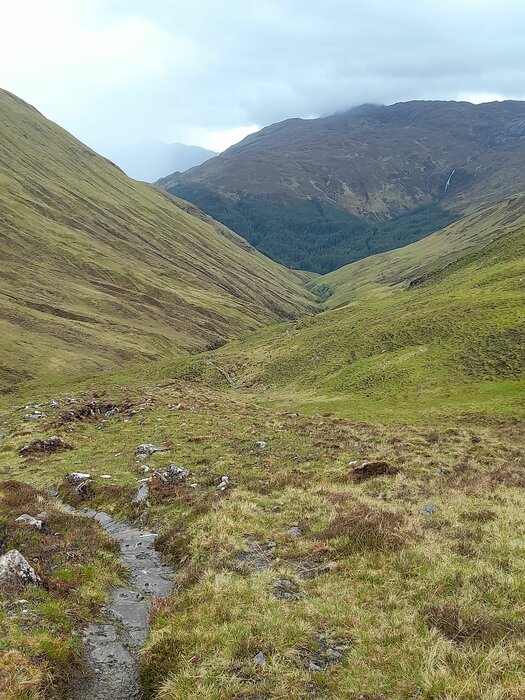 Looking down the return route to the woods. 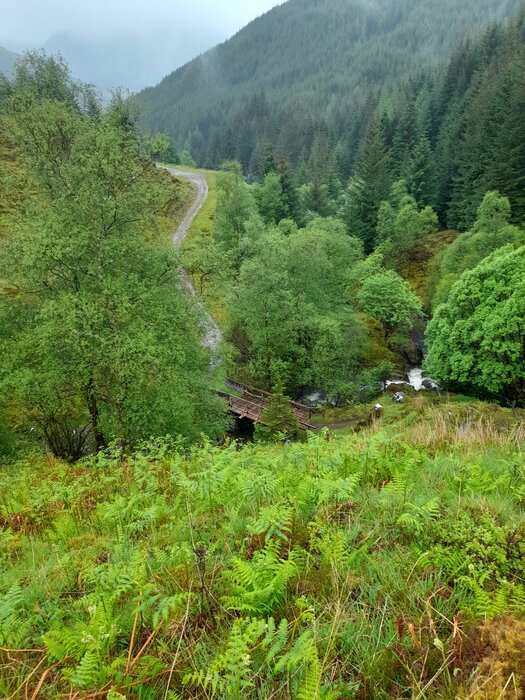 The footbridge back to the forest track

In a continued effort to get down quicker than I got up, I started to walk 20 paces then jog 20, walk 30, jog 30 etc etc, stopped when I saw a figure approaching on the track. Blonde girl carrying a HUGE pack. I had seen her just after 9am approaching the Kintail Lodge so stopped for a chat and asked where she was heading. She explained she had got lost and managed a 4hr detour to "somewhere" Her plans were now to get past the Falls and make camp as she reckoned her bothy target (began with an M!) was now too much. Didn't confirm but likely she was doing the Cape Wrath trail.

Carried on my walk jog down through the forest until I came out at the sheep folds again. As if by magic, the phone started pinging as I got the first signal of the day. Able to catch up with Margaret and arrange a meeting for some Fish and Chips from the Morvich chippy van and a call with John to confirm I was down safe. The rain was now pretty heavy so just plodded back along the track to the van. Had a couple of hours to kill before chippy time so got dried, changed, cuppa and settled down with my book.

This is a long walk, much on a good forest track but it feels longer I think because of the rough path beyond but its well worth the effort. The Falls are amazing and the sense of peace and solitude crossing Bealach na Sroine is wonderful.

2 corbetts and a bump

Meall a Ghiubhais behind the nature reserve

Conic Hill with the Gym Bunnies

Beinn a' Chrulaiste...the hill that keeps on giving