Beinn Bhreac anyone? Possibly the most remote, shy and retiring Corbett of them all. The voie normale goes up to Bruar Lodge, but that involves a big up and down on your mountain bike, and we all know what that means on the way back....

So how about Glen Feshie? You can bag 2 Corbetts for the price of one, plus the bike ride to the start is dead easy. And even better, you walk up through the amazing Slochd Beag, over the watershed to the headwaters of the Feshie and then get a great ridge walk back to base.

our_route.gpx Open full screen  NB: Walkhighlands is not responsible for the accuracy of gpx files in users posts
I parked on the Forestry track at NN842 996, about 1 km further than the new Achlean car park. But this is offset by the bike ride being very easy on this side of the Feshie, mainly on tarmac and fairly flat, so you can peddle along admiring the trees, the river, the blue skies and sunshine, and having a wonderful time. I left the bike at Ruigh-fionntaig, downed half a sarnie and set off up the Slochd Beag. 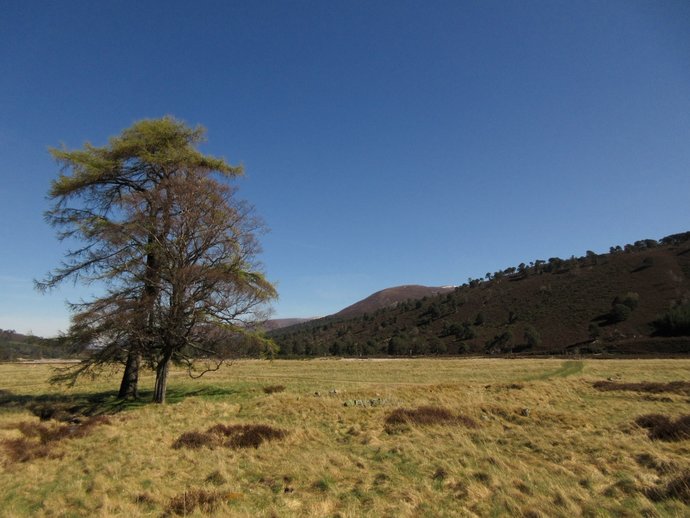 Feshie flats, a good place to leave the bike 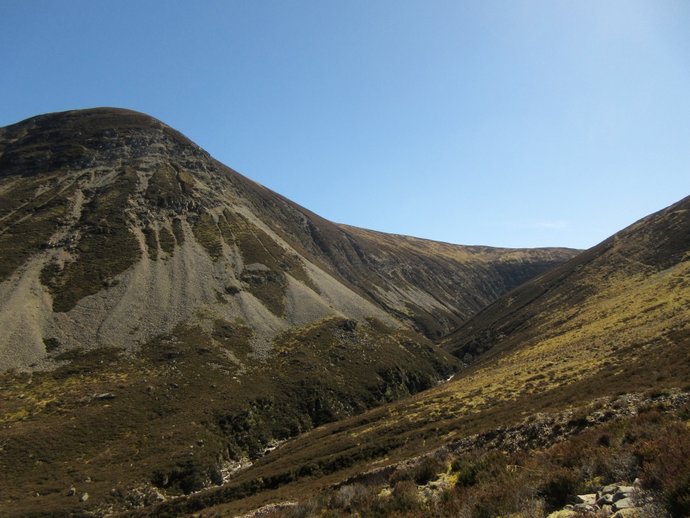 There's a brilliant, well constructed stalkers path up Slochd Beag, snaking across deep ravines, zig-zagging up the screes, and then heading up onto the edge of the Slochd, giving really stunning views. 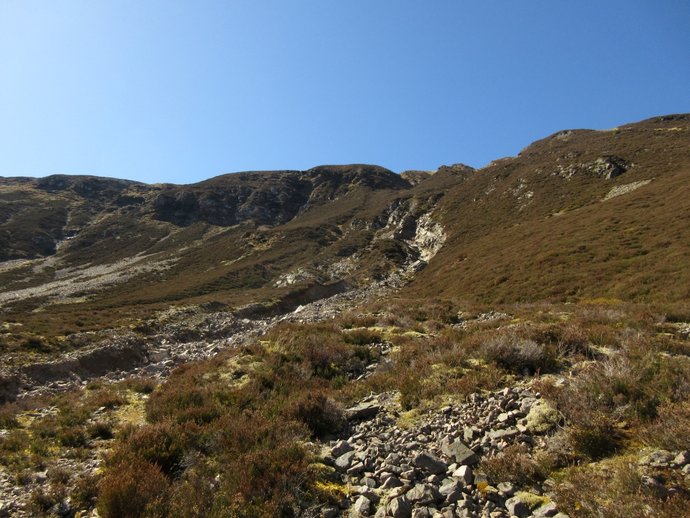 The crags above the path in the Slochd Beag 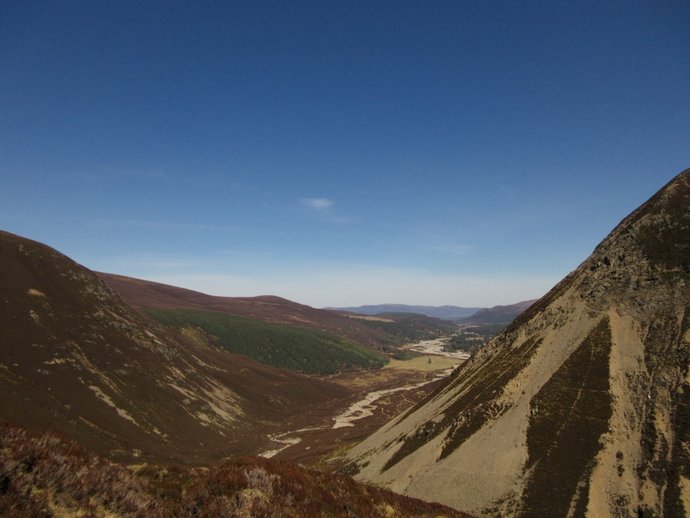 Looking back down Glen Feshie 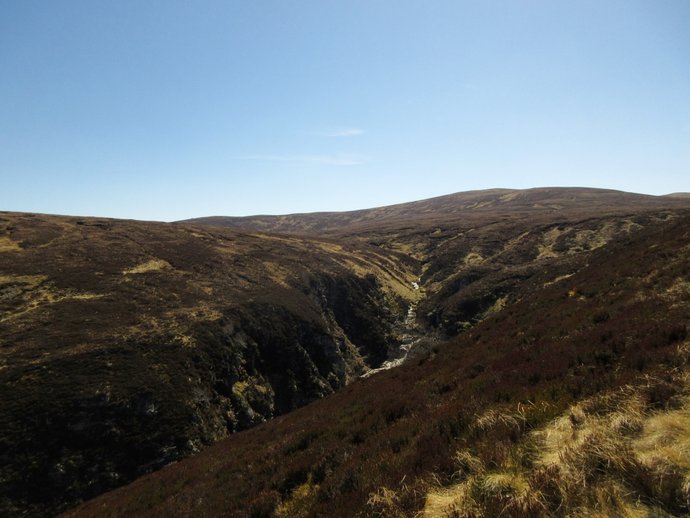 Emerging from the Slochd

The path along the Allt Lorgaidh is also excellent, but peters out once the river starts to flatten out. But it's really easy going on grassy river flats. Amazingly, there are several stone bridges, exactly as marked on the map. They don't make 'em like that any more. 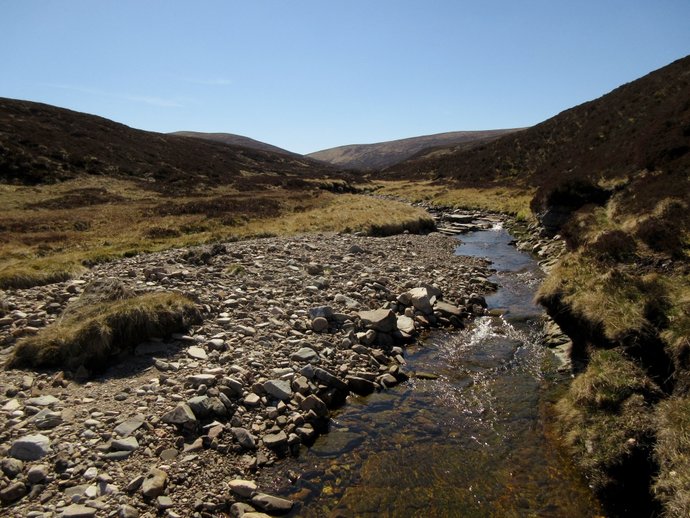 Walking along the Allt Lorgaidh 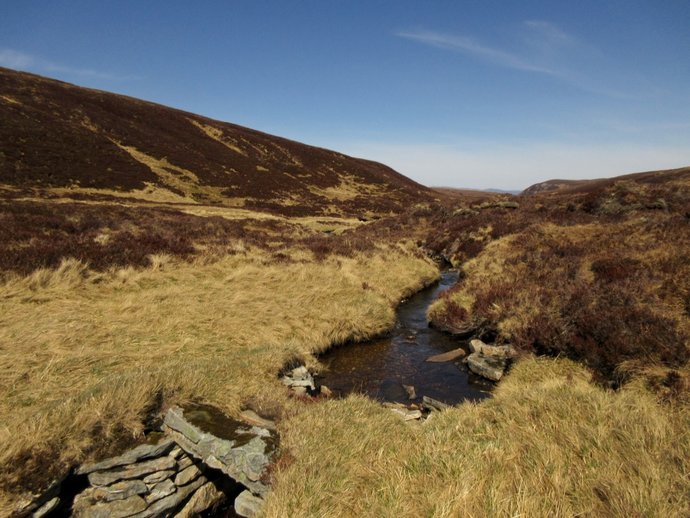 All the bridges are still there

The path gives up at the watershed, a huge area of peat, but easy to walk on when dry, leading down to the Caochan an Duine. The descent is easy, on grass and moss, and on a nice path further down. 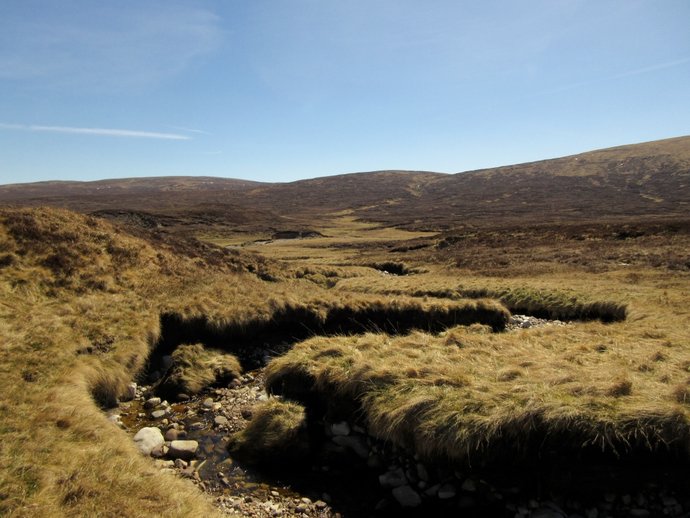 Heading down to the Feshie

You're soon at the headwaters of the Feshie, a very special place and a real privilege to be there. 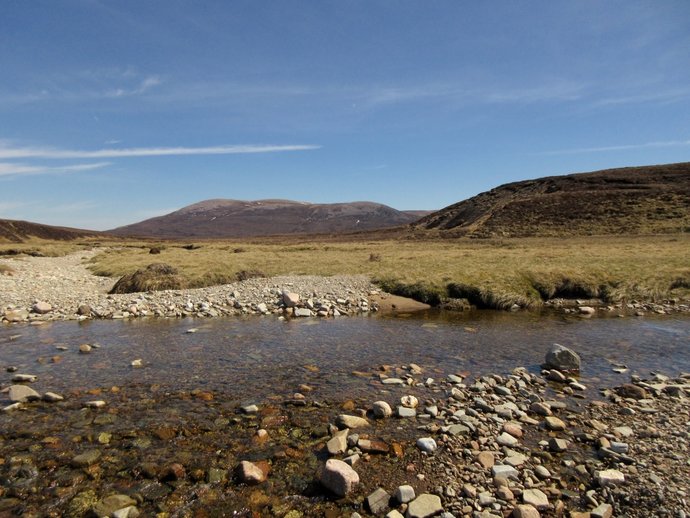 The headwaters of the Feshie. And no, that's not Beinn Bhreac

I headed downstream, on the river flats, but the river winds around a lot, and needs to be crossed many times. This got a bit repetitive, so I headed uphill on rough stuff, crossing Coire nan Cisteachan (hags), and hitting very easy going as I climbed towards pt 837. I traversed along Coire Creagach to the 792 m col. It was only when I got very high up that I could finally see Beinn Bhreac. Talk about an elusive hill! It looks a bit small and insignificant really 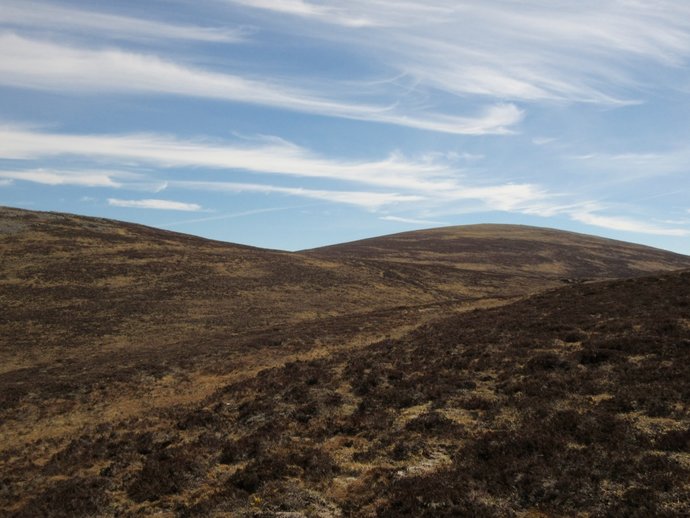 The first sight of Beinn Bhreac.

The climb to the top is dead easy and the views are amazing: the Glen Tilt and Tarf hills, the Cairngorms and out west to Ben Alder et al. 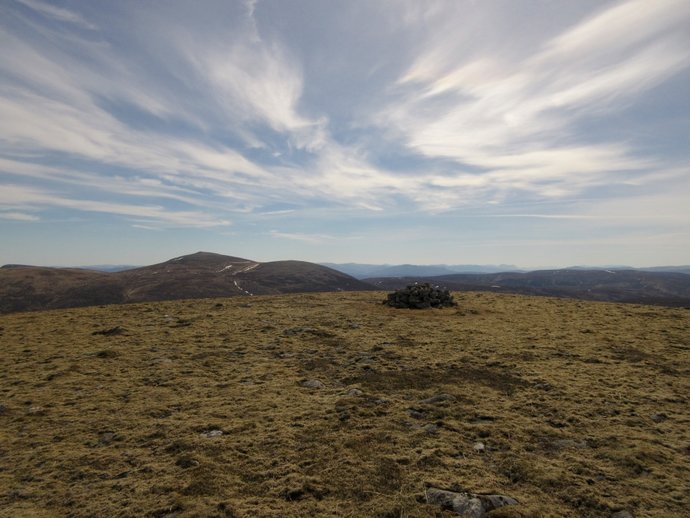 But what's this I see?

Out of all the wildernesses in Scotland, where would you get 2 baggers arriving at the summit within seconds of each other? We talk a while: he's come from Bridge of Tilt, on foot all the way! Deep respect

And I get my photo taken. Just proving that I was really there.

I'm in loafing mode, but he's in a hurry to get back, and heads off towards Glen Tilt 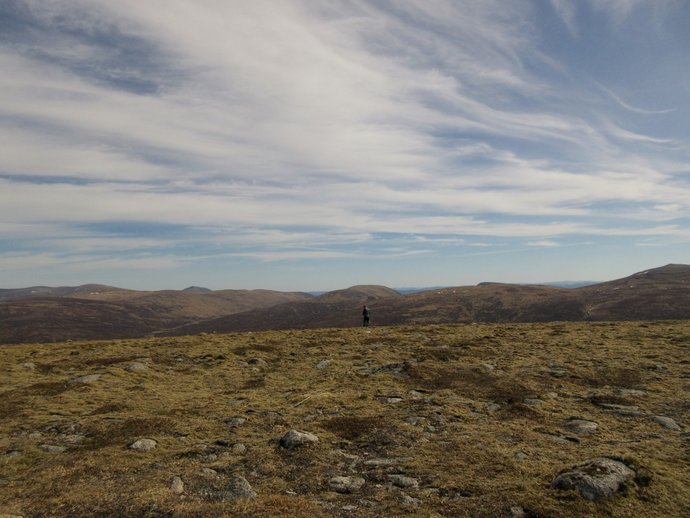 My new pal heading off towards Glen Tilt.

Eventually, I tore myself away from the lovely view, and headed down and along the ridge. Cutting a long story and a long walk short, the going is very easy in some places but there are also areas of horrible peat hags, right up the sides of the hills 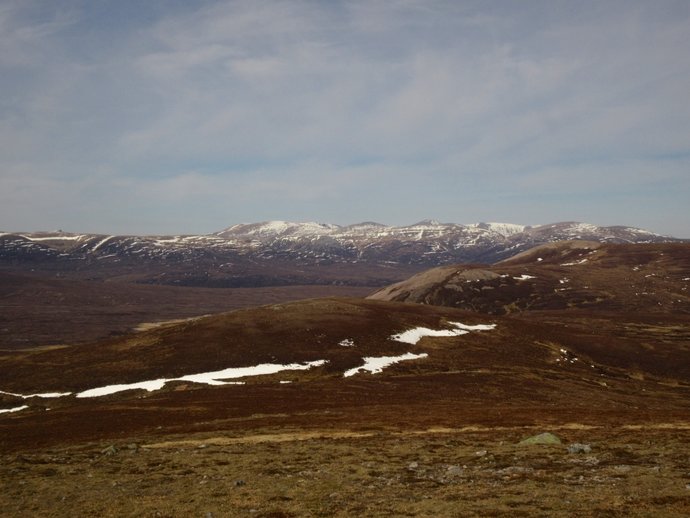 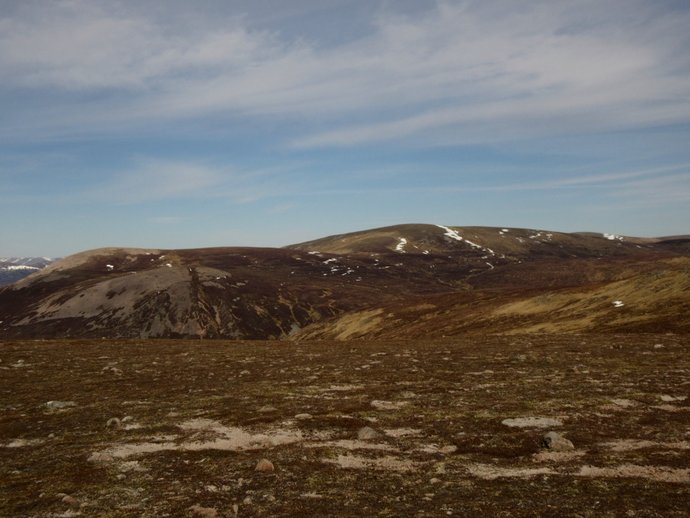 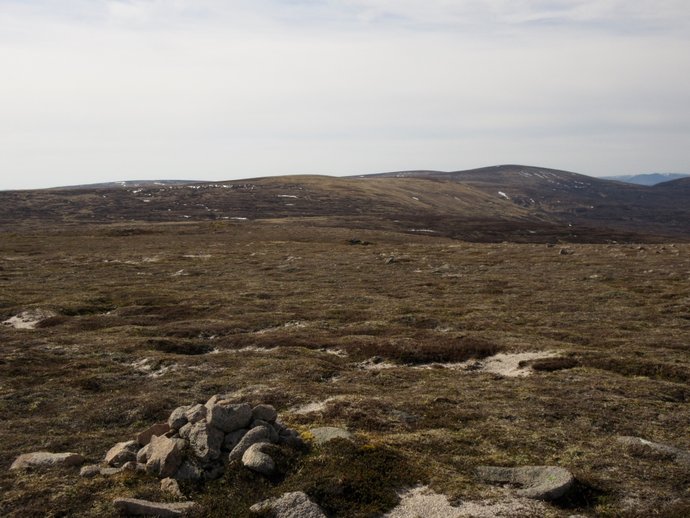 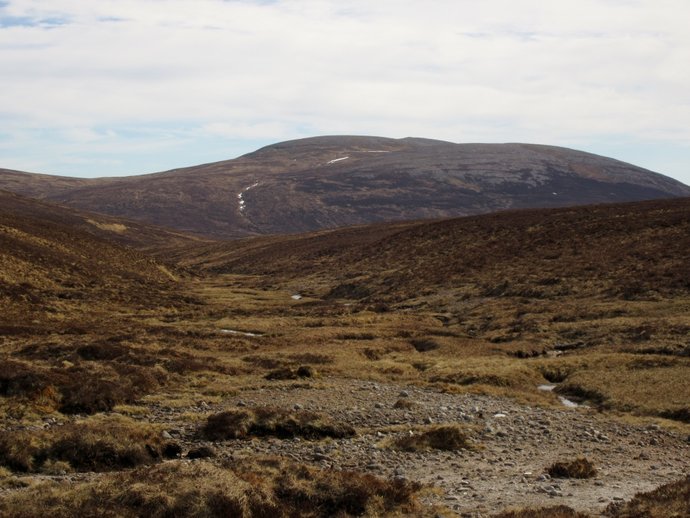 A nice view of Beinn Dearg

So it's up and down, up and down, bog trotting, moss, tundra, and it looks like it's all more of the same. But...just before the climb to Leathad an Taobhain, there's a surprise, a deep river valley, looks steep. But the great thing is that there are no peat hags. 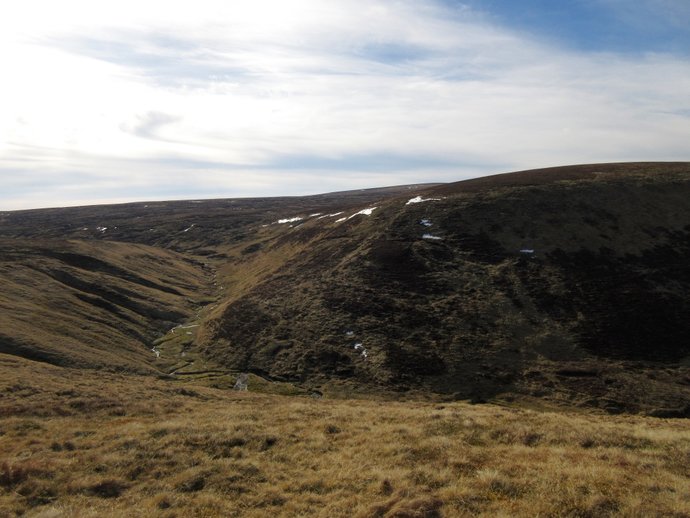 But, once you top out of the rift, it's peat hags almost all the way to Leathad an Taobhain. Tired baggers legs had had enough of rough stuff

, and it was soooo good to get onto the lovely mossy summit plateau, and see the trig 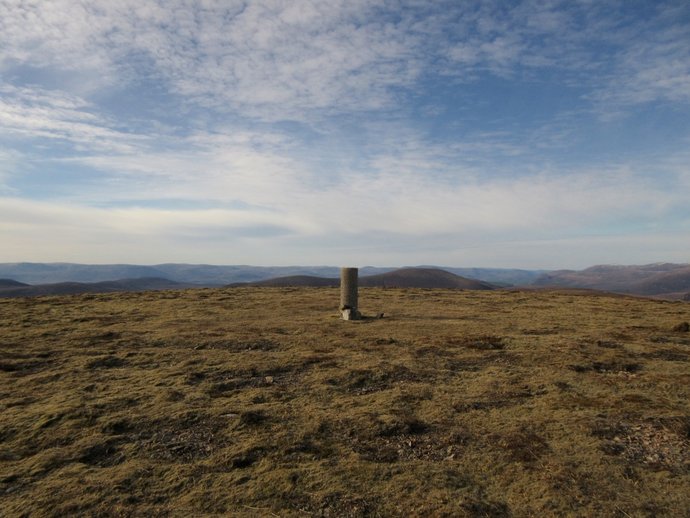 More tea, trying to resist the urge to put on hat, fleece and gloves, and failing - it was jolly chilly, despite the wall to wall sunshine. Down into another steep notch ON A PATH! What luxury. 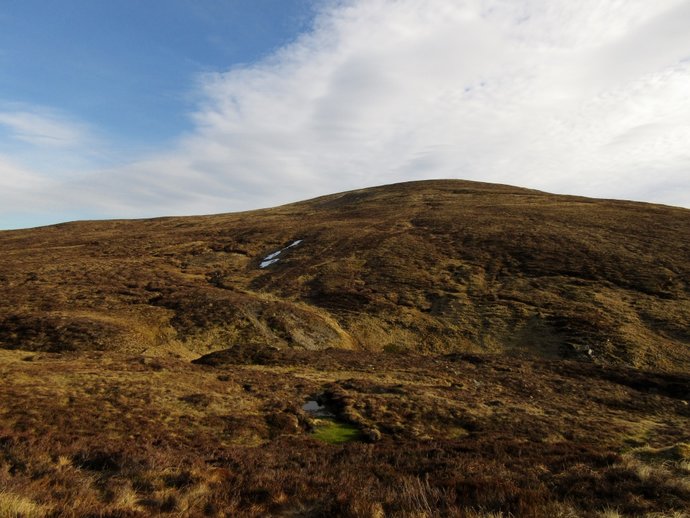 Steeply up onto Meall an Uillt Creagaich, and the most superb view of the Cairngorms from the top. 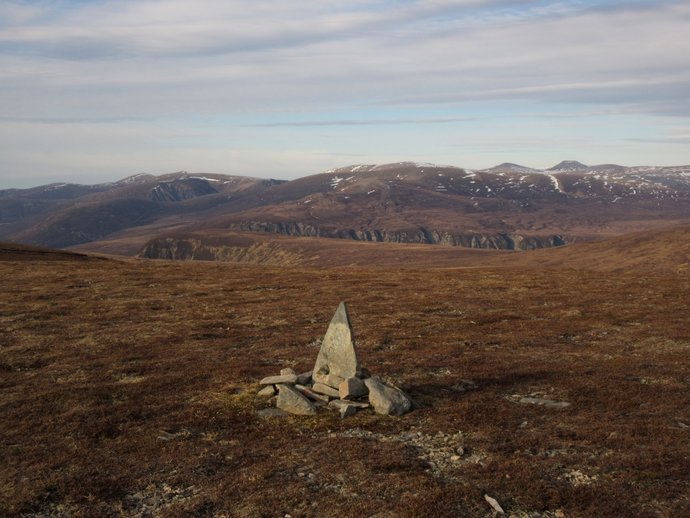 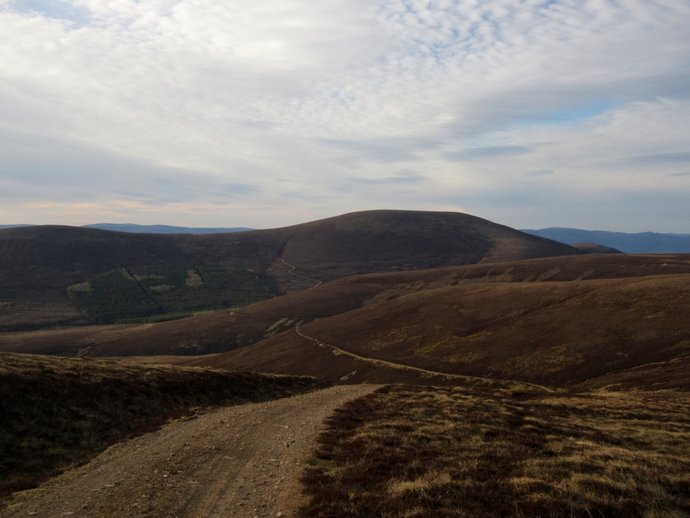 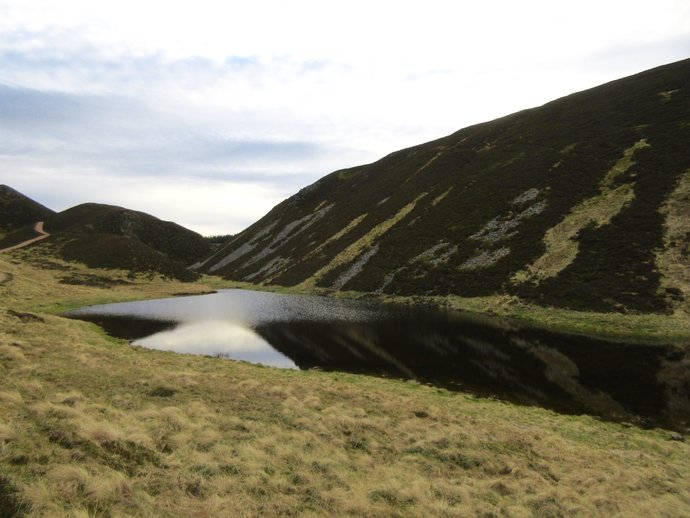 Umm, I felt a bit tired when I got to the bike

But I guzzled the bottle of water I'd stashed there, ate the last sarnie and snickers bar and I was jet-fuelled again biking back to the car.

Just in time for a lovely sunset while driving back. Wow! What a great day...
Click to mark this as a great report. Register or Login free to be able to rate and comment on reports (as well as access 1:25000 mapping).

Derbyshire can be just as fun as Scotland

Meall Glac Tigh-fail - size is definitely not everything!