This weekend I was on my tod as XPfloyd was otherwise engaged so needed to find some munros using public transport so these two were ideal.
Got the first train from Dumbarton to Corrour and arrived at 11:20 to be greeted by snow on the platform,I hadn't realised how much snow was in the hills and I was now thinking my plan to do Beinn na lap aswell was out the window. After I reached peter's stone the path goes right but the route to take continues straight up and the going was really hard I dont know if there is any path when there's no snow but it certainly wasn't today so it just I had to slog it out to the top of the first hill.
Although it's hard going I always find it fun in the snow especisally these moments when you find yourself waist deep in the stuff and there were a few of them

Once I had reached Meall na Leitire Duibhe things got a bit easier as the terrain gets rockier and after a quick refuel I carried on to the summit taking in the stunning views which was a welcome change to the usual pea soup. Making good time to the Mam Ban it was now just a straight climb to the summit of Sgor Gaibhre which looked easier and closer than it was.
With the summit cairn reached at 3:30 I was starting to realise that Bein na Lap would be better tackled on another day so I went for the twin top of Sgor Choinnich instead. 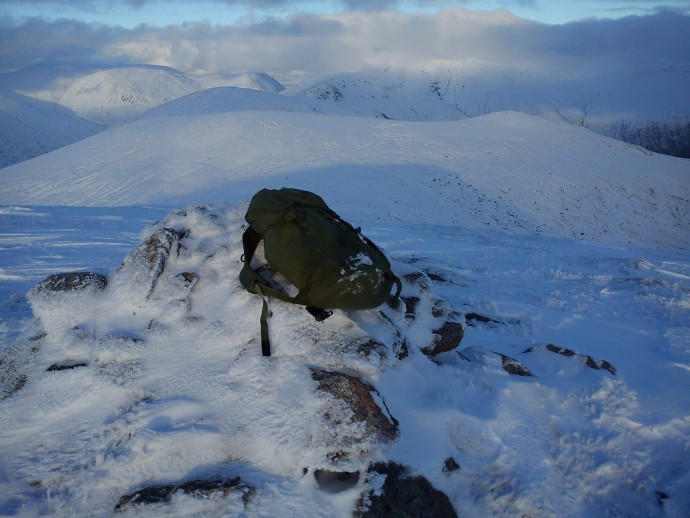 I hung around at the top for a bit taking in the views which were spectacular but within ten minutes there was a lot of black cloud appearing and something told me it was time to move.
After a pathless descent I reached the edge of the forrest at Loch Ossian and as if to say 'right thats you off the hill now' the heavens open up.
With light fading I had reached the track at Loch Ossian and with my knackered legs it was a long walk back to the station.
A really enjoyable day and as usual I cant wait untill the next one
Click to mark this as a great report. Register or Login free to be able to rate and comment on reports (as well as access 1:25000 mapping).