This is a walk I've liked the look of for some time now. Last year I did Lady Anne's Way which uses some of the Dales Way paths so I was familiar with sections of this walk.

Covid scuppered my original plan to try to walk round Wales so rather than just over 1,000 miles and 7 to 8 weeks of walking I ended up doing 83 miles in 4 days. Oh well, maybe next year, or maybe not - wait and see time I suppose.

Anyway, to this walk.

). A bit overcast but according to the forecast, little chance of rain. The sun came out for a time in the afternoon and the westerly wind (walking in to it) got stronger as the day progressed.

For most of the day the path hugs the banks of the River Wharfe with the highlight for me being Bolton Abbey.

After the Farfield Livery there is a really dodgy crossing of the B6160 with very little visibility and fast flowing traffic - definitely worth taking your time and deciding where it is best to cross this road.

The section between Barden Bridge and Burnsall is part of Lady Anne's Way so I had walked this bit before.

My mileage for the day is more than the guide book 16 miles as I took a bit of a wander round the grounds of the abbey before continuing along the Dales Way footpath. 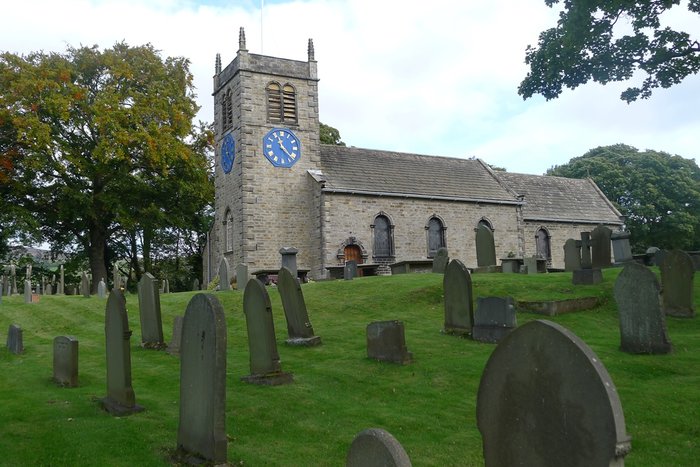 The forecast for the previous night was for continuous heavy rain and it started just after 10pm, no idea if it rained all night but it was still chucking it down at 7am when I woke up but by the time I headed off it had stopped and surprisingly stayed dry all day.

At this time of year I rarely go to long sleeves but with the overcast start and the strong wind I only walked for about 2 miles before conceding to the cold and stopping to change tops. The weather improved as the morning wore on and before dropping down to Kettlewell the sun even appeared now and again. There was quite a lot of surface water on the high level fields above Grassington but it became obvious that there had been a lot of overnight rain when I got down to Kettlewell and rejoined the River Wharfe. Definitely a different river from the day before, very fast flowing and close to bursting it's banks in several places on the way to Starbotton. The real issue however was the amount of water coming off the fields above me and running downhill to the river making for a bit of an obstacle course until I reached the bridge for Starbotton then things improved.

From Starbotton to Buckden was familiar to me but where Lady Anne's Way goes through Buckden and heads off up towards Cray the Dales Way continues along the tree lined river bank. I particularly enjoyed the path after Yockenthwiate where there were less trees and the views opened out (the sun was out as well which helped).

At Beckermonds I left the river behind and headed along the minor road to Oughtershaw before turning off and walking towards Cam Houses which I could see 3 miles ahead. This felt like a long 3 miles, initially easy going on an old tarmac surface I passed Nethergill Eco Farm and Swarthghyll Farm when suddenly the good surface finished and the bog hopping began. I get the feeling this is probably always a damp area but after the overnight rain it made things worse and pretty slow going but eventually I was past Cam Houses and after crossing over a good 4x4 track reached the cairn marking the high point of the Dales Way. This is also where the path meets the Pennine Way so I recognised where I was from doing this walk 5 years ago. All that was left now was a few miles of gradual downhill on the Cam High Road with great views of Ingleborough and a very distant looking Ribblesdale Viaduct.

A really enjoyable days walk with plenty of sunshine but another day of walking directly in to an ever strengthening wind. Those dark clouds are coming this way Dead trees have to be photographed (it's the law) Refused to even look at me while I took her photo Far Gearstones - Bramaskew Farm (about 3 miles short of the M6)

Another night where rain was forecast but thankfully it stopped 5 minutes before the start of my day. I had considered walking up Whernside and then using the Dales Highway to get to Dent but there would have been no views from the top of the hill so left it for another time.

Blea (or is it Bleak?) Moor was a wet and miserable start to the day with more bog hopping and fast flowing channels of water to negotiate but it's only a short distance (about a mile) before reaching the minor road which I followed down to the Dent Head viaduct. The road then runs parallel with the River Dee. A combination of tarmac and easy field walking meant I arrived in a very quiet Dent quite quickly. Dent looks like a tourist hotspot but not today and I walked through the village without seeing anyone until I was nearly out the other side. Lovely old cottages and cobbled roads.

After Dent it was more field walking following the River Dee and this was where I had a really heavy hail shower that lasted for about 15 minutes. Thereafter there were regular heavy showers for the rest of the day so the waterproofs had to be kept on. After the fields there was a quiet lane and then I crossed the River Dee on the Brackensgill Bridge followed by a short walk up to a minor road. The walk up to the road was on a narrow path which doubled as a fast running water channel from a nearby field. Walking through Gap Wood and on to Millthrop was really enjoyable even with the rain back on.

At Millthrop I joined up with the River Rawthey and there was a good path to follow until reaching the A683. A short section of road walking (there is a path for most of it) and then it was back to fields. Due to all the rain there was one cow field that was particularly badly churned up followed by a short bit of lane that was deep with mud.

Another river to follow, this time it was the River Lune and just as I reached the Lune Viaduct.the rain stopped and the sun came out and stayed out for the last half mile to Bramaskew Farm where I stopped for the night.

A bit of a mixed day but even so the scenery was terrific and the sun coming out now and again was just a bonus. The forecast today was similar to yesterday but it turned out to be much better with only one very quick shower so a waterproof free day to end the walk. Today was a day of mistakes, four in total so I would guess it should have been about a 22 mile final day.

The first part of today's walk followed the River Lune as far as the Crook of Lune bridge. Thereafter I left the river behind and after some field walking crossed the M6. The crossing is for farm workers and sheep and cattle so it's narrow and the ground before you cross is an obvious choke point so is pretty muddy. I was expecting the railway crossing and the M6 crossing to be close together but they were actually about a mile apart.

Within a mile it was time for mistake 2 (just before the crossing of the Mint River) when I took an obvious track running round to the right in a field and followed it down to a farm. Another backtrack to see my obvious mistake then headed on. Some more field walking then I was on the banks of the River Kent which I followed to Staveley. Really nice walking here but on arriving in Staveley I made mistake 3 by missing my turning at Stock Bridge Farm and finished up in the middle of Staveley.

Probably the longest section of climbing on the Dales Way is after Staveley with a lane and a field to negotiate. There is then a drop down to a farm before picking up a narrow tarmac lane which has another two steep climbs before leaving it behind on a bridleway.

It now feels like I am close to the finish and after walking through a couple of high level fields before starting to drop down towards the finish. I reached a sign and failed to check it properly (mistake 4) and headed for Windermere which was half a mile away. As I dropped down it suddenly twigged that I didn't want Windermere, I was after Bowness On Windermere so headed back to the sign to see that I should have turned left to stay on the Dales Way - idiot!!!

I still wasn't convinced I was on the correct route as it was probably a couple of miles from where I made my mistake to the finish when I thought it was going to be less than a mile. There is a really nice view up Windermere from the finish point at the bench and I took 5 minutes to have a look around before heading off. Views in to the Lake District open up View from the finish

In summary, really enjoyed the Dales Way and it's a part of the country I will definitely return to. Maybe next time I'll do the Dales Highway as it looks good to.
Click to mark this as a great report. Register or Login free to be able to rate and comment on reports (as well as access 1:25000 mapping).