The boss advised me last night that we were running low on milk so this morning I checked the car. 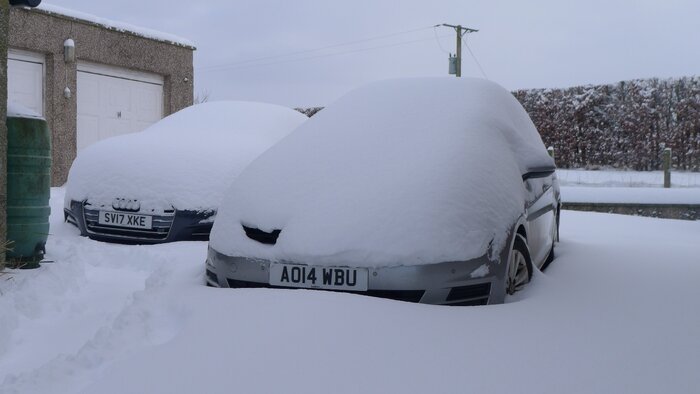 We live about 3 miles from Letham but by taking various farm tracks as well as a couple of minor roads I can turn a straight there and back in to roughly a 7.5 mile circular walk.

Our house is on a dead end tarmac road that ends at a farm and the farmer has ploughed the road so he can get in and out which is great for vehicles but it has left the road with a thin layer of smooth and super slick ice so it was a bit of a dance for this part of my walk.

After a couple of miles I left the road and picked up a farm track that links our road with another dead end road and this was completely different walking with deep snow and no sign that there had been anything on it for a couple of days. 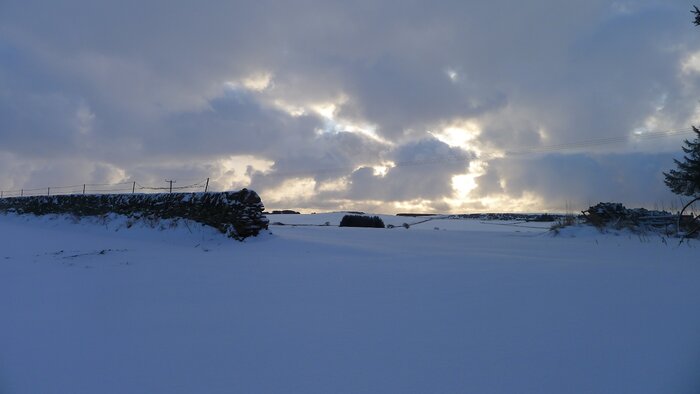 The roads around us are all "C" class roads and very low priority, some have been ploughed in one direction so are reduced to a narrow lane whilst others have been left untouched and are now covered in fairly deep snow. On a ploughed section I was surprised by a very quiet Openreach van that crept up behind me and was really close before I heard it (not sure if they have any electric vans?). I moved in to the deep snow and he then drove past and that was the only traffic for the 2 miles in to Letham on the road.

The forecast suggested the heavy showers would be over by early this morning but it was pretty heavy snow for about 40 minutes till I reached the village.

Apart from two or three dog walkers nobody seemed to be venturing outside today.

The big surprise was that I was able to pick up two 4 pint bottles of skimmed milk as I was expecting this to be a wasted 7 mile circular walk and heading home empty handed.

On the way back I stopped to see my pals - I suppose they are well insulated but they looked cold. After yet another photo shoot with the cows it was a 2 mile gradual climb back on the road to the house. Eight pints of milk on my back was quite hard going - I'm forgetting what it's like to have a heavy rucksack on. So, a successful trip, hopefully something a bit more exciting might not be that far way. Meantime, I think I may just be going a little stir crazy