A glorious day for these tumps just at the entrance to Glenmuick. Sunny all day with a cooling breeze - perfect walking conditions

Managed to sneak a park beside a shed with an abandoned Montego outside. Tucked in at the back out of the way.
When we got back from our walk, we spotted a sign saying access to site was needed 24/7 - we'd unconciously complied by not obstructing entry.. Set off along the path across the road but altered our ascent via Balintober to comply with the notice at the end of the track up through the woods. Passed the cairn at the entrance to the track up to Balintober. Cairn and plaque at the Balintober track end

Walked up the track to the bothy, being passed by an estate worker patrolling the tracks in the area in his Toyota 4x4 - standard kit these days it seems. Salt lick by the track on the way up Vallaich Fine views of Lochnagar on the way up Vallaich Directions to Mt Keen on the way up Vallaich The shooting bothy on the way over to Vallaich 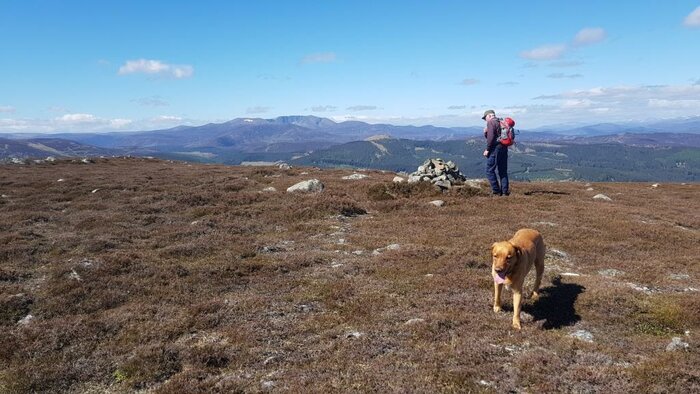 Sauntered over to Vaillich, then back to the bothy. On the way over to Leuchan, GC spotted what looked like a gigantic hare perched on the top of a knoll beside the track. He couldn't resist an inspection. GC inspects Hare 1 on the way up Leuchan 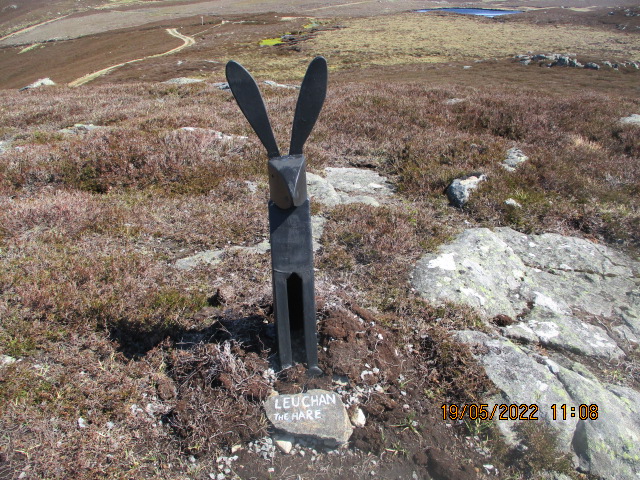 Hare 1 on a knoll on the way up Leuchan

Continued to the top of Leuchan, where we stopped for a snack at the first top and to view possible routes to Knockie. Continued along to Am Mullach then came back to Leuchan where we struck down over the corrie to meet the Mounth track, through some tussocky and heathery ground, but not too much moose-stepping needed. Walked up the mounth track to the ancient boundary fence, marked by a rustic metal cross, probably the remnants of a sign. 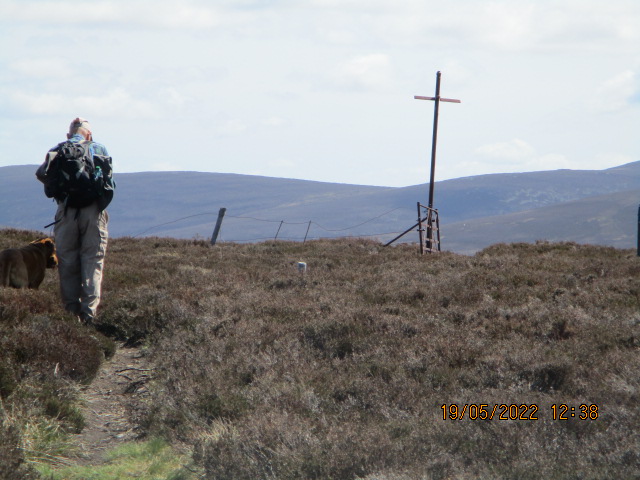 The Iron Cross on the Mounth path summit

Followed the broken fence with the occasional wooden posts rubbed smooth by deer scratching themselves. The old fenceline to Knockie Continued across the soggy bealach and up on to the top of Knockie at the intersection of 3 decrepit fences beside a wee lochan. Another old fence joining the one up Knockie GC and H at the top of Knockie

Stopped for our lunch and plotted a route over to Pannanich. Just as we left the top, my bonnet blew off into the wee lochan.
It quickly floated out of reach, so we tried to get Harvey to retrieve it. Unfortunatedly, he was good at retrieving sticks and balls, but not bonnets, so he swam up to it then studiously ignored it, until it became waterlogged and sank. So in future droughts it will no doubt appear.........Hope they don't start digging around for the rest of my body - it winna be there !. The " bunnet lochan" on Knockie

Donned my buff - pirate style - to prevent my bauld heid getting sunburnt.
Struck off down into the corrie, across the Pottegach burn then up on to the Pannanich track by joining up grassy patches to avoid moose-steppy heather.
Trudged up the track to Pannanich's trig. Throughout the day we'd been blessed with fine views of Lochnagar in it's summer raiment, apart for a patch of snow on the side of Cuidhe Crom.
With one last gaze across to Lochnagar, we descended towards Glenmuick House, spotting another "hare" on the dyke on the way. Puzzled by their function ? Hare 2 on the dyke down Pannanich

At the back of Glenmuick House, there were notices prohibiting entry into the grounds of the big hoose, so we skirted the fence to gain the track via a tied-up gate, which we surmounted. Tried to follow the path down through the woods, but some major windfall forced us into the grass field, which luckily didn't have livestock in it. As I negotiated a birk tree trunk lying in the field, I tripped on a branch and fell onto the log, giving my ribs a dig, dunting the heid and bending my back in a way unsuitable for a person of my age. Luckily, there's nae muckle grey matter left to scrambled these day - so no real damage.......
Managed to recover and walk down to the car.
Stopped in Ballater for a coffee, but no BR's as everyone had stopped cooking. However, the substitute stickies were a pleasant alternative and made the journey home acceptable - with the sun still blazing.
An epic day in spite of my ribs hurting and my dogs barking !
Click to mark this as a great report. Register or Login free to be able to rate and comment on reports (as well as access 1:25000 mapping).

Bow Fiddle and a 2nd recce of Maw Craigs ( Crovie)