4 hours is the time from Glenpean Bothy to the summit of Carn Mor and back to the bothy.

24.2km and 1430m are the distance and height gain for the car to A'Chuil and back and then the walk to Carn Mor and back to Glenpean Bothy.

Pre-COVID, the November bothy night was a regular fixture for Kev and I. Perhaps it had it's origins in the Tarf Hotel trip of November 2009, the first time we had met. Darren was there that night too and joined us for a subsequent November bothy night in Duinish. A quiet night, even allowing for the fact that we all ended up sitting round the blazing fire in our underwear. Since then Kev and I have had such nights (although November has sometimes slipped into December and on at least one occasion into January) in venerable establishments such as Over Phawhope, Brattleburn and Burleywhag in the South and Glensuileag, Luib Chonnail and the Hutchison Memorial Hut in the North. Most have been memorable in their own way - from the Dick Bush gags of the night in the Hutchy to the bloke in Brattleburn who used an axe for shaving, from the "fairies at the bottom of the garden chat" and carbon monoxide alarm in Over Phawhope to being smoked like a couple of kippers by the fire in the first Luib Chonnail night. Anyway, November in a bothy had become a tradition interrupted only by COVID. Something about being in a bothy on the cusp of the coming winter, on the Edge of Darkness.

COVID put the kaibosh on the 2020 edition and so with the coast clear for November 2021, a date was set and options tossed around. North-westish was always the area of choice and finally we settled on Glenpean, one of three "sister" bothies scattered around the old settlement of Strathan at the far western end of Loch Arkaig. The Corbett of Carn Mor was the main target, pencilled in for conquest on the Saturday, with the nearby Corbett of Sgurr Mhurlagain mentioned as an option for the Sunday. Glenpean was selected as the accomodation and it was arranged to meet up at the parking area at the end of the Loch Arkaig road at 10.30 on the Saturday.

I headed up on the Friday night for a night in one of the other Dessary bothies - A'Chuil. Just because it was there, and because I could. And because Mrs D had said I could. And because Children in Need was on, so a bothy night was required if ever one was! I headed home as soon as I could bunk off work to pick up my stuff. And the dog. Luna turned 2 at the start of this month and is now in her hill-walking prime. She did her first Graham in April, her first Corbetts in May and her first Munros in Knoydart in July of this year. She did her first bothy night last month in Ben Alder Cottage. She knows the tell-tale signs of an expedition being organised and was quite beside herself on the Thursday evening as I was pulling all the gear together.

The drive up the A9 and along the A87 was extremely unpleasant. An almost constant drizzle had the wipers going constantly at varying speeds and by the time I was driving along the Mile Dorcha to the eastern end of Loch Arkaig, the drizzle was still at it. From just beyond the Eas Chiag falls and parking area, I was on new ground. I had heard all about the rollercoaster ride that is the Loch Arkaig road and so it came as no surprise. All was going well, too well perhaps, when about a third of the way along the road, I hit a pile of mud and debris that looked like it had been washed down off the hillside. I winced at the noise as it clattered off the undercarriage. 30 seconds or so later and I was out of the car and looking at a flat off-side front.

Twenty minutes or so later, cold, wet and seriously annoyed, I had the service wheel on. Luna had looked distinctly miffed as she had been ordered out of her crate in the boot and made to stand beside it in the pis*ing rain while I did the needful. At least she wasn't covered in sh*te from changing a wheel on a night like this.

Travelling somewhat more cautiously than previously, I managed to negotiate the remainder of the road without incident and finally pulled into the parking area alongside an Audi A3 and a people carrier. I hoisted the overnight pack for A'Chuil and set off with Luna in tow. The moon was almost full and once my eyes had become accustomed to the darkness, there was no need for a headtorch until the last little of section through the trees to the bothy. The gable end of the bothy loomed out of the darkness and it appeared initially that the place was in darkness but as I rounded the corner of the building, a faint orange glow could be seen seeping out of the nearest window. Adrian and Katie (fae Aberdeen and Aberdeenshire respectively) and Bourrach the dug were settled into the East Wing with a fine fire going. After initially behaving "like a wee knob" (Katie's words, not mine), Bourrach eventually settled and he and Luna had a fine old evening together. We all enjoyed a few drinks and some craic before I retired to the East Wing and got a little fire going in the grate to take the edge off before calling it a night.

The morning dawned fairly skanky, with Adrian and Katie considering canning the idea of doing all three Munros on the north side of Glen Dessary and instead just bagging the one before calling it quits. I left them to consider their options and headed back along the track to the car, passing a pair of discarded M&S Autograph gentleman's drawers by the side of the track! Fraoch Bheinn from the bridge over the Dessary at Strathan 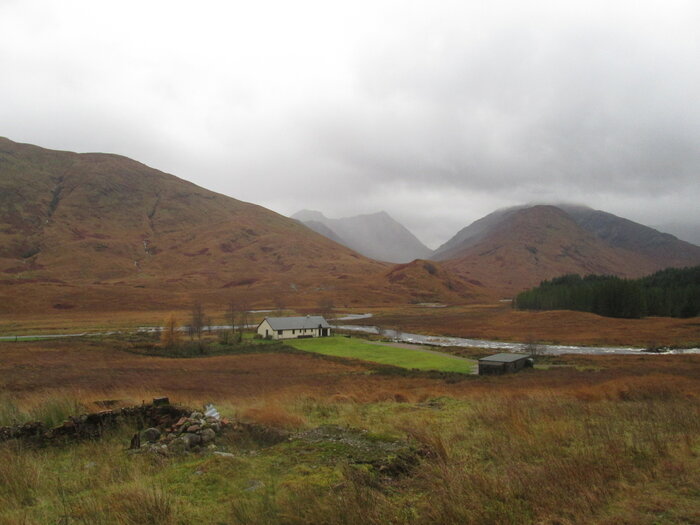 Back at the car, I set about replenishing and repacking the overnight pack for the walk into Glenpean and just as I was finishing off and discovering that the inside of a roll mat was an ideal place to carry a few cans of beer, Kev pulled in.

Just over an hour later and we were at Glenpean Bothy where we bagged our spots on the sleeping platforms and laid out the fuel for the fire, before grabbing a quick bite to eat and heading for Carn Mor. Arriving at Glenpean (photo by Kev) Kev secreted a bottle of champagne in the undergrowth outside for later. He had said that I would be surprised by his choice of libation for the evening and now revealed that he was celebrating another one of his papers being published. I couldn't honestly say that I'd ever had champagne in a bothy before but this seemed like as good a time and as good a reason as any. I threw a small daypack on my back with some bare essentials and Kev travelled even lighter, carrying only a jacket on his back.

We whacked our way straight up the narrow contour lines along the edge of the plantation behind the bothy before emerging onto the wending ridge just east of the 616m point. 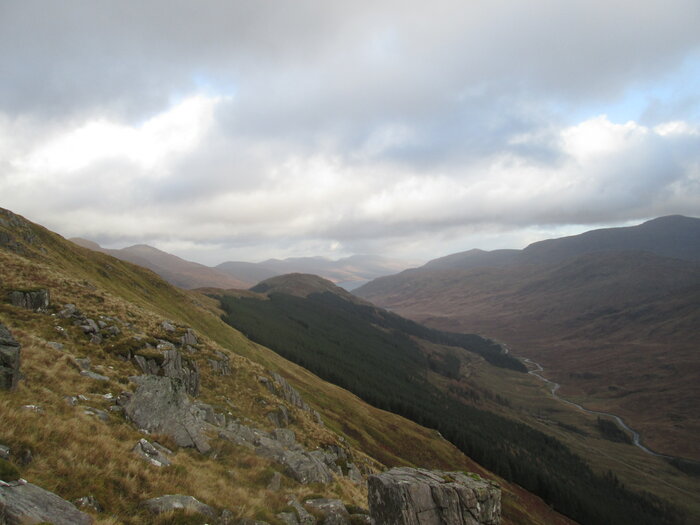 East over Coir a'Bhoganaich to Fraoch Bheinn and Sgurr Muurlagain East to Loch Arkaig and the distant sunny Arkaig Grahams

The walk along the ridge was fairly typical of that kind of off the beaten track, low-profile Corbett such as Carn Mor - undulating, twisting, lochan-studded and largely pathless, save for the occasional bit of grassy path most likely made by the deer and not mad Corbett baggers! A man, a dog and a mountain (photo by Kev)

We flirted with a few passing showers but by and large they seemed to just graze us as the passed and it certainly looked like anyone on any of the neighbouring Munros to the north or south of us may not get off quite so lightly. Carn Mor summit looking nearer than it actually is Luna and the Dessary Corbetts Last pull to the summit

It was no surprise to be greeted by a raging hoolie at the summit and it was all I could do to manage to stand long enough on the big rock just beyond the cairn for Kev to take a photo. We didn't hang around to enjoy the view of Loch Morar stretching out towards the Atlantic. Crazy to think, as Kev said, that beyond the far end of the loch there was really not much except the vast expanse of the Atlantic. Hunkering down at the summit (photo by Kev) We made ourselves scarce after a few photos and took a contouring descent line back into Glen Pean down through the area of what was once the largest landslide to have taken place in Scotland. The weather was now turning against us and the prospect of a night in the shelter of the bothy was more acute with every step. Descending through the landslide site to Lochan Leum an t-Sagairt The walk eastwards back to the bothy through Glen Pean was a bogtrot the like of which I have seldom experienced. Kev had badly misjudged the footwear situation and gone with a pair of Scarpa trail shoes. His feet were soaking, so when we reached a spot where there appeared literally no way to proceed other than to march straight through a flooded section of some several metres in length, he had no hesitation in ploughing straight through. My relatively new Asolos and Sealskinz socks had done a marvellous job of keeping my tootsies bone dry, so I was less keen on this option. It was literally a case of the River Pean oblterating the path just at a point where the path ran alongside a sheer rock face. I decided to climb up above the rock face and inch my way along a ledge above it to the other side. Kev seemed unconvinced but I made it. A slip would have ended badly but clearly the old bloke has still got a bit of the old mountain goat about him! I reflected on the fact that there are probably places in this remote, narrow glen that the sun never touches over the winter months as we trudged back to the bothy. We clocked in at 16.30 on the nose, exactly 4 hours after leaving.

We had the gaff to our ourselves for Kev's first bothy night since pre-COVID and my third bothy night in the last 7 weeks.