Day 1
First day and as always for a multi day trip it was off on the train up the Highlands. Its cheap enough if booked far enough ahead. Trouble being I had to go with the weather and had just missed out on a decent lengthy sunny settled spell and the first part of my walk looked to be hit by the remnants of the storm travelling across the Atlantic. With a good knowledge of the routes and bothies in the area I was quite happy to make adjustments as and when. Several Corbetts were planned for the trouble but with the forecast for Thursday indicating heavy storms I would just have to wait and see how it panned out.Rucksack had been weighed and at 12.8kg with 4 days food I was quite happy. Off the train at Blair Atholl not long after midday and it was a road walk up to Old Blair. I had initially planned to go over Beinn Mheadhonach but a forecasted storm overnight put me off so it was off over the tracks to Allt Sheicheachan bothy which usually takes me just over a couple of hours. On arrival a young couple were in attendance for a stopover and so as the weather was decent at the time I walked on up Glen Bruar intending to knock off around 4 miles off the route. I had read about a dog at the lodge and on approaching could hear it before I saw. A little terrier who would charge at me until faced but never get near enough to cause a problem and eventually giving up the further away I got. Around 3 miles from the lodge I started to look for a spot and on wettish ground found a spot by the burn 787789. Despite it being a decent evening heavy rain did arrive during the night and was to be feature of quite a few nights. 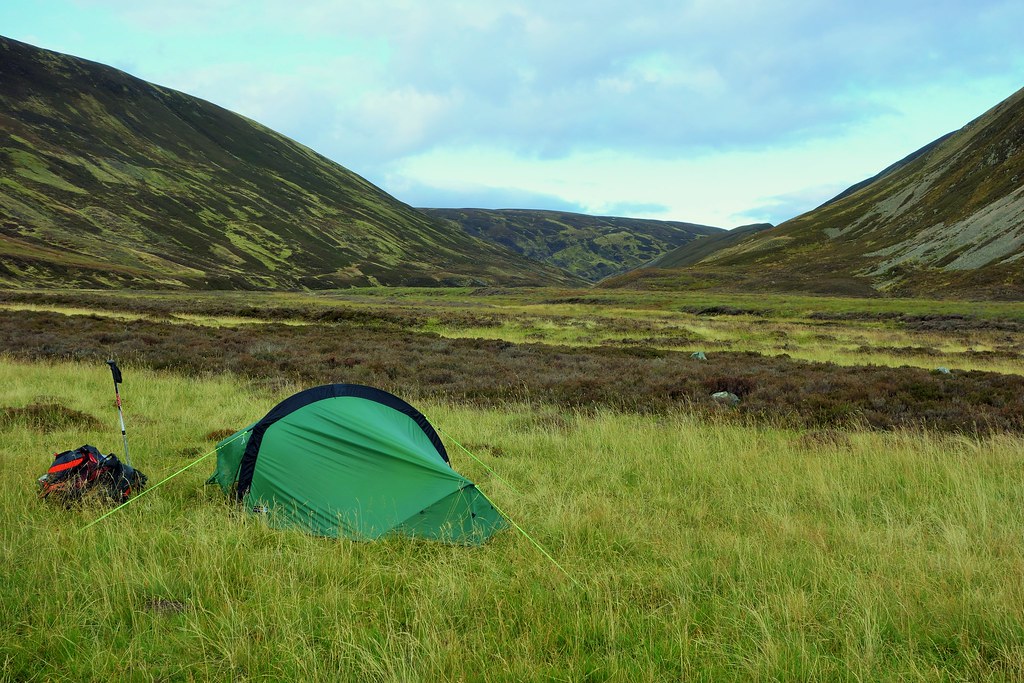 DSC05293
Day 2.
A wet start and the inner tent packed up separate to the fly which was stored in the outer pockets. The mist was low and the air wet as I set off up the glen towards the first climb up towards the high point of The Minigaig. Climbing onto higher ground the track was initially evident on the ground and with cairns I was able to follow it in the thick mist.Dropping off onto the upper reaches of the Caochan Lub I lost the cairns in the boggy ground and used the OS locate app to confirm where I was as I had that strange feeling even though you are right your direction feels wrong. After about a mile the path and cairns were regained and it was a climb up onto the 830m top of the Minigaig. I had planed to go onto the Corbett Leathad an Taobhain but the cloud was thick and the wind strong so I dropped down over the top into strangley within metres a clear sunny Feshie side if the Minigaig with the weather barrier being right on the top. Having visual I could seen the ground to go over dropping down The Minigaig losing it in various places as the track just disappears. I intended doing the Corbett Carn Dearg Mor before dropping into Feshie so I continued on to the glen floor before going northwards around a plantation which the OS has a path marked but which I failed to find and made my own before hitting the forest track and then contouring onto Carn Dearg Mor and then onto Carn Dearg Beag and down to the glen over rough ground and then over the footbridge and down to the bothy for an overnighter and a chance to hang up the fly for an airing. Only 4 were in the bothy so it was a fairly quiet night. 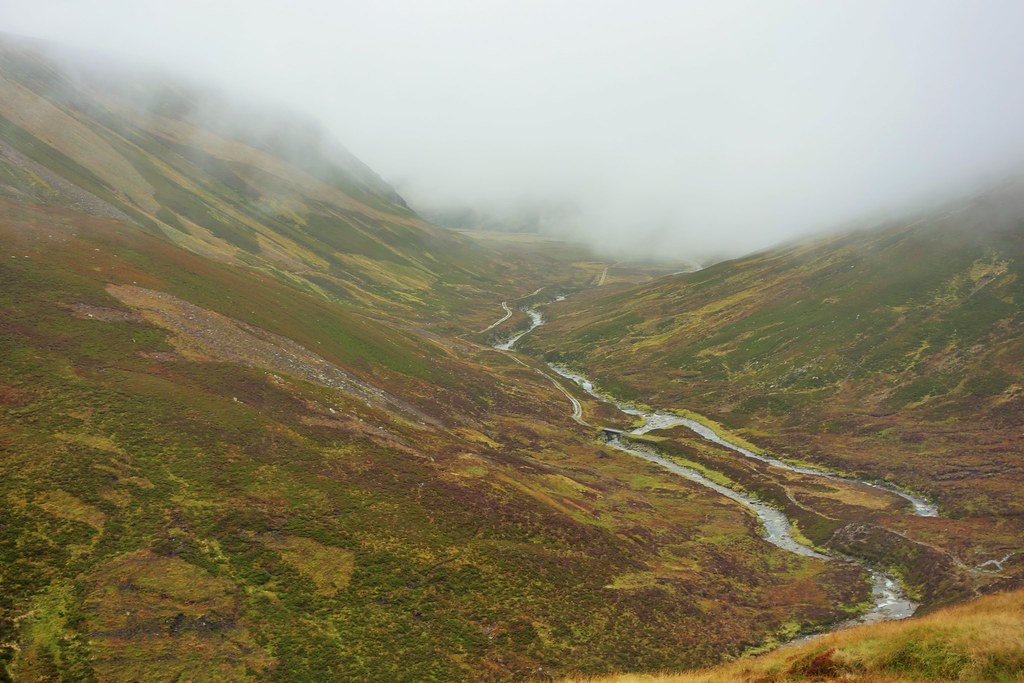 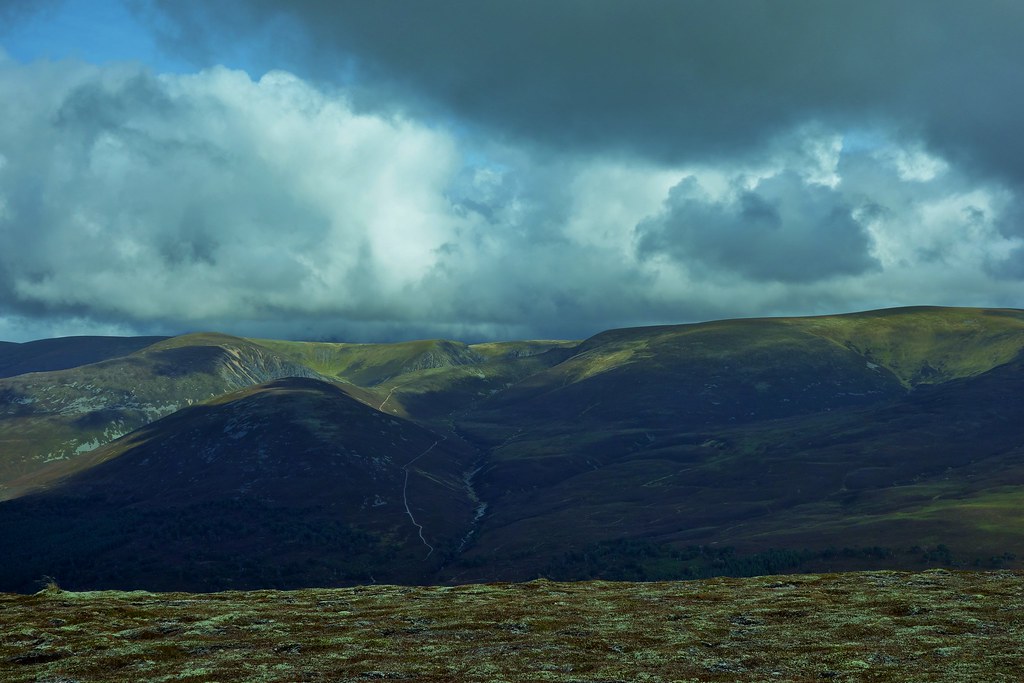 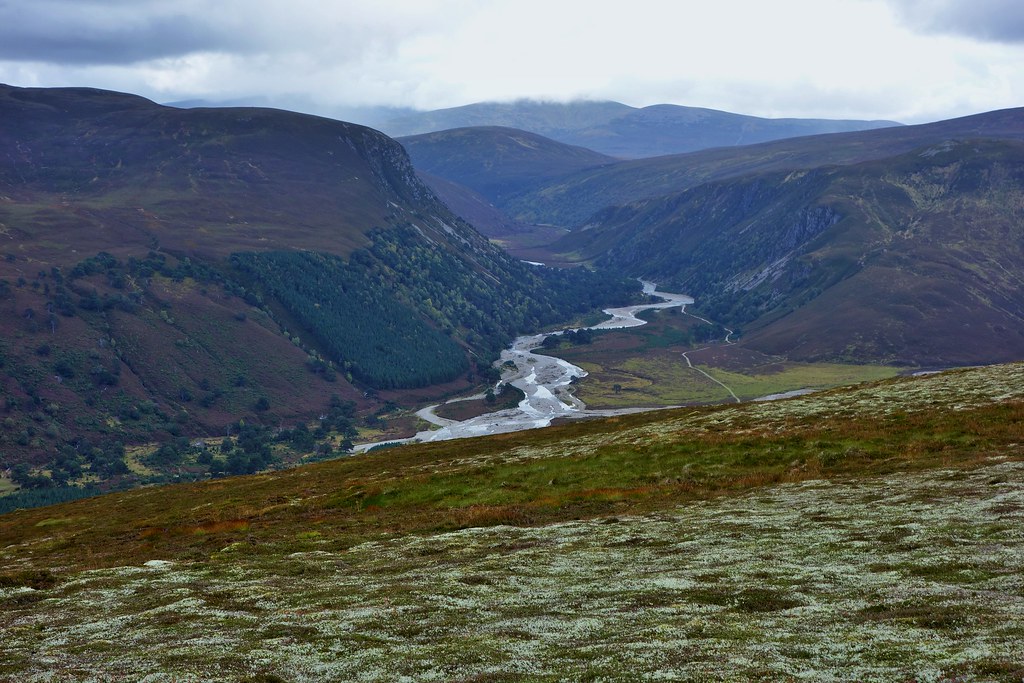 DSC05311
Day 3
Had initially planned for a high level day over the munros Monadh mor and Beinn Bhrotain from Feshie but a met forecast had indicated high winds and low cloud so it was a low level day up glens Feshie and Geldie which isn't a bad day. Had been this way the previous April and was aware of the few landslips in the upper glen. I had seen a TGO video on Youtube with walkers ignoring the path at the top of the worst landslip and dropping all the way down to the burn on loose boulders so I was surprised on getting there to see its an easy 3 steps across the top of the landslip and far harder to drop. Lunch was taken in the old pony hut and then over the boggy section to Geldie lodge area and onto the Red House, which is to be converted to a bothy in the next couple of years. Met a Swiss lad in there the first day time walker I had met since I started. then it was onto white bridge which had been the original camping spot had I taken the high route. I could see a storm coming up from Glen Tilt so it was hurriedly up with the tent and inside for a brew. 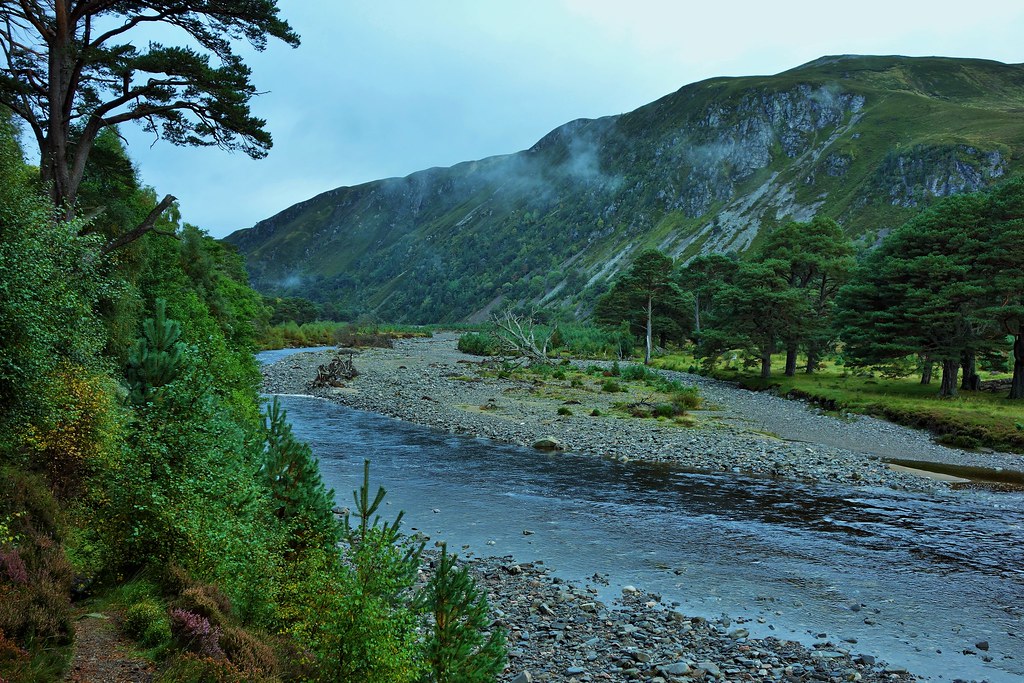 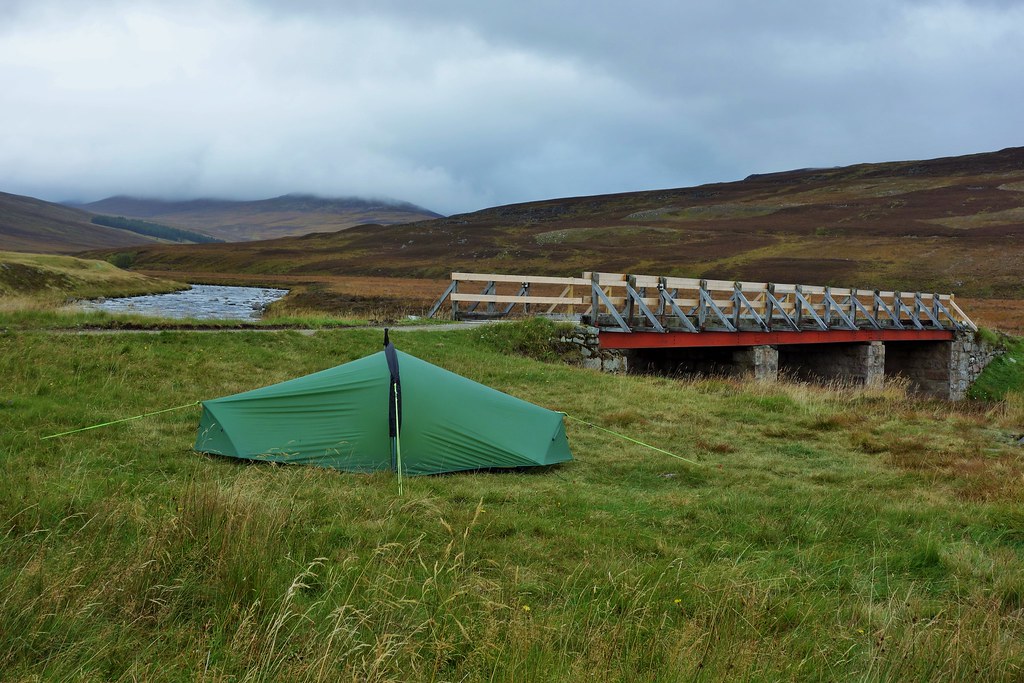 DSC05324
Day 4.
It had rained heavily during the night and I saw that I had failed in my hurried pitching off the tent to see a small ditch area just off my sleeping area which would have caused problems had it rained more. Todays plans of going over the Corbett Sgor Mor and camping in Glean An T -Slugain were shelved as my boots and socks had taken a hammering from the constant wet so it was an easy day to the Linn of Dee down into Braemar for some food and up the hostel where the warden let me in around 2 to get sorted.
Day 5.
An initial road walk in sunny conditions to Invercauld bridge and then a pleasant walk up through the Ballochbuie forest and onto Gelder Shiel bothy for around 1pm where I dumped the sack and went off for a walk up the Corbett Conachraig. On returning found company where in the for the night, 4 D of E and 15 children outside in tents. Around 6 a warden arrived and asked that the tents be moved from the buildings and then just shy of 8pm, 3 fathers with a total of 13 children arrived, having cycled in from Balmoral area, all wanting in the bothy. With only 3 bunks spare clearly a compromise was required so 6 children doubled up in the bunks with the fathers being on the floor. The downside however was the 3 fathers having carried a horde of alcohol up, proceeded to drink it and only stopped when being asked to not long after midnight. Such is weekend bothylife. 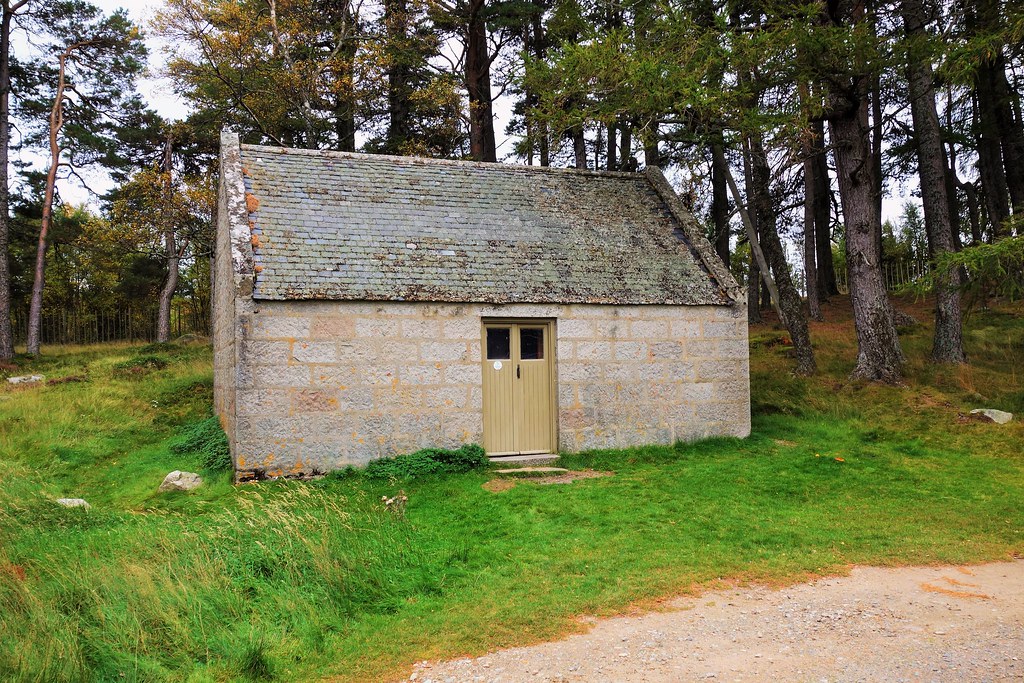 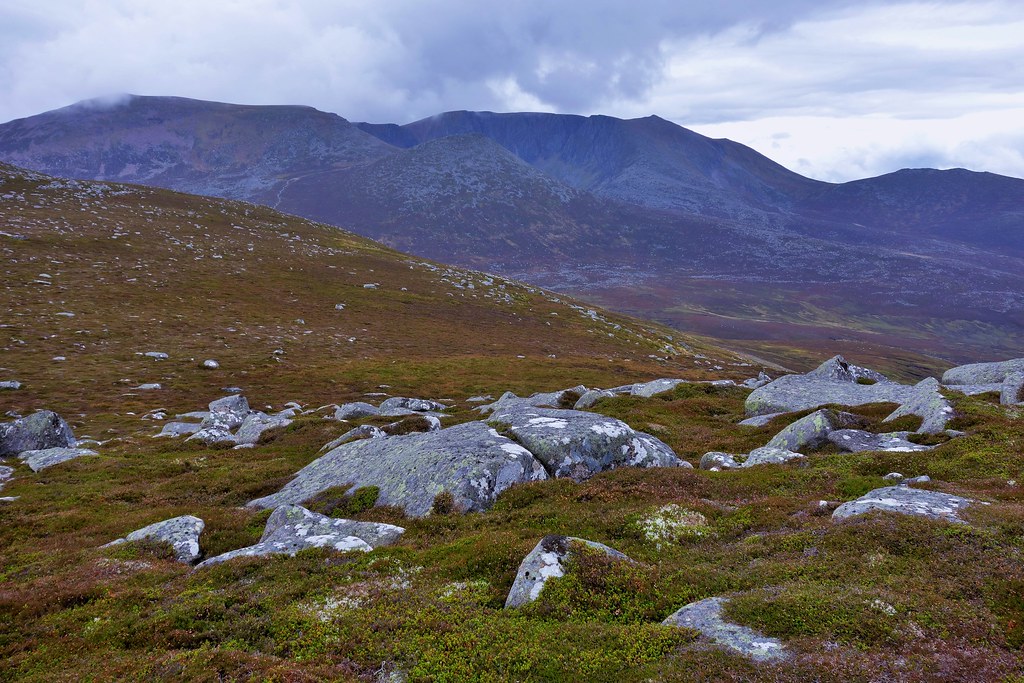 DSC05341
Day 6.
Again plans altered. The initial plan had been to do Meikle Bin and a high level day over Lochnagar and over to Callater but on getting to the start of the path the cloud was down to around 2000ft and was racing around the hill.Id rather do it on a fine settled day and i am quite content to wait for it so it was down to Loch Muick and a walk along to GAS bothy. I didn't know that was an eastern area MBA meeting on at the bothy and it was full at midday so any thought on staying here were cancelled so it was on to the end of the loch becoming aware of how strong and cold the winds were once coming out of the shelter of the trees surrounding GAS bothy.A good path ascends to the Dubh loch, which is a spectacular place, and then from the end of the loch a boggy path ascends to the upper corrie. From there I ascended over untracked wet ground to the path which contours around Carn an t- Sagairt Mor and then down to the cold Callater bothy, complete with its white horses sheltering in the lee of the bothy. About 6, Bill from the Lodge knocked and asked if I wanted to come in for a bit of heat so it was into the Lodge, a wood burner on, some chips and beer!!. Coming back into the bothy, which was freezing, I saw there was no lights on so went in and saw surprisingly that the door leading to the room that I had left my gear was in was closed so assumed it must have blown shut. With eyes unaccustomed to the gloom I then got one of those of those hearts in your mouth moments when you hear an an unexpected cough in the darkness behind you!. A visitor, Anders, was in and had seen my gear and not knowing where I was had settled straight into his bag to avoid the cold. 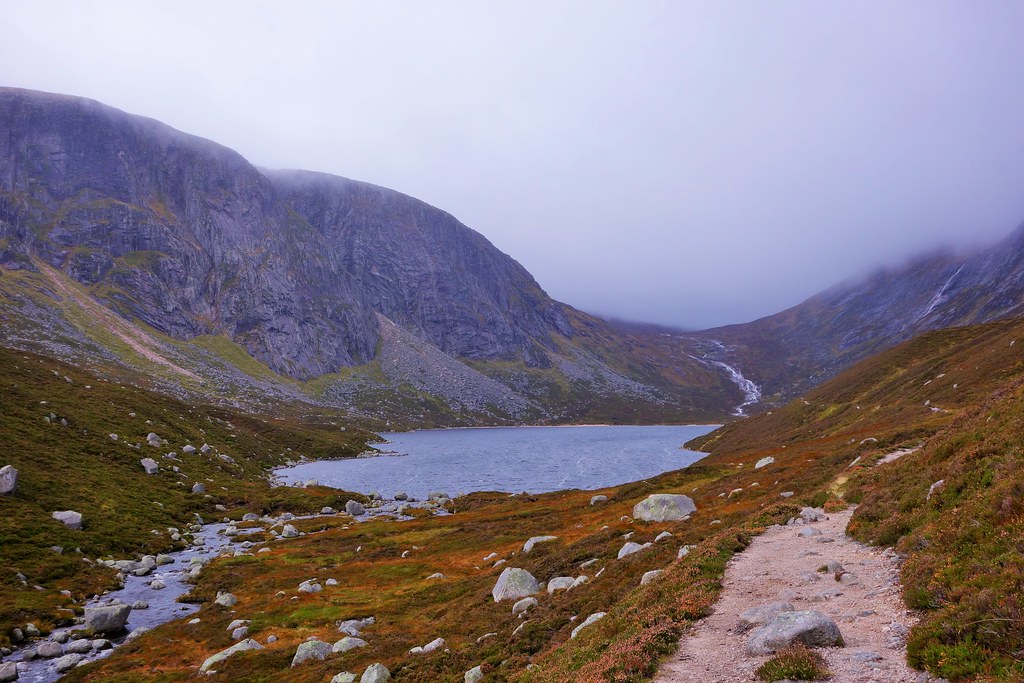 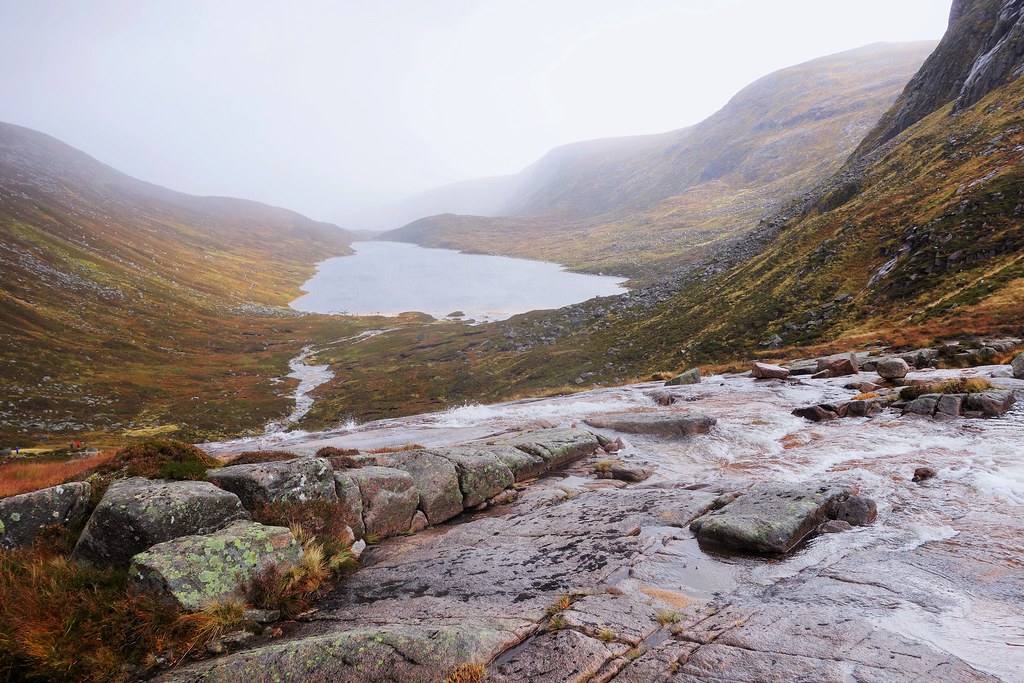 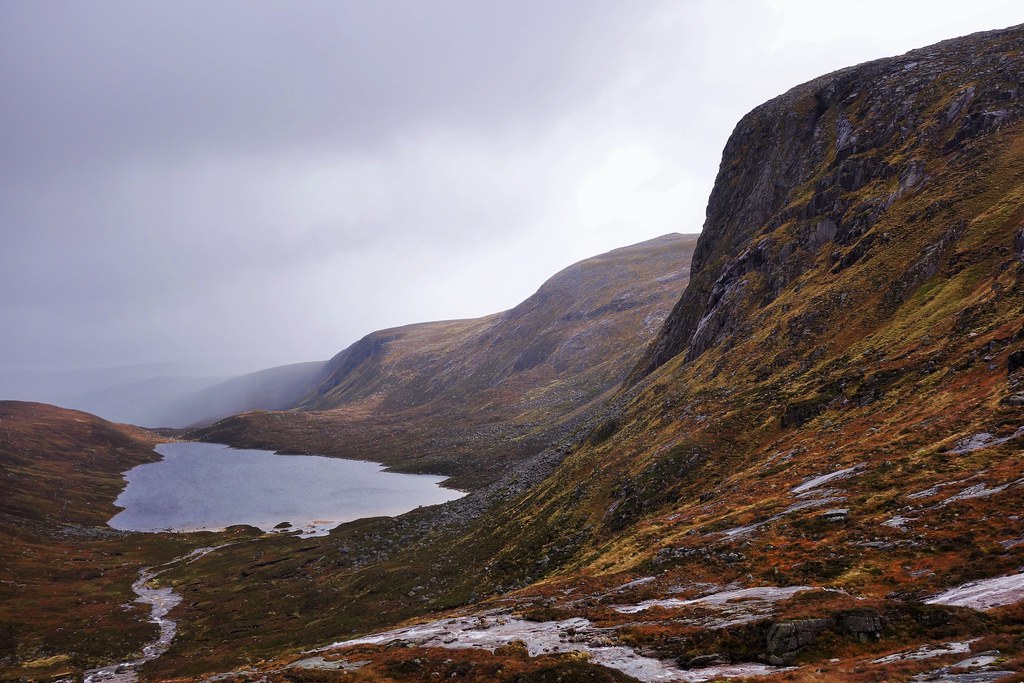 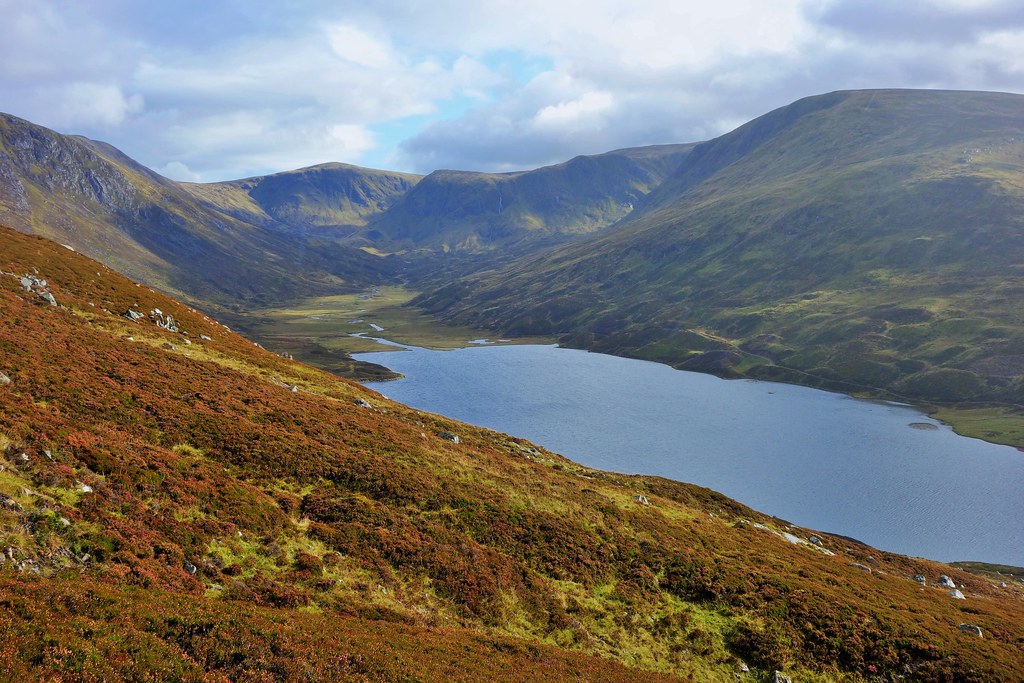 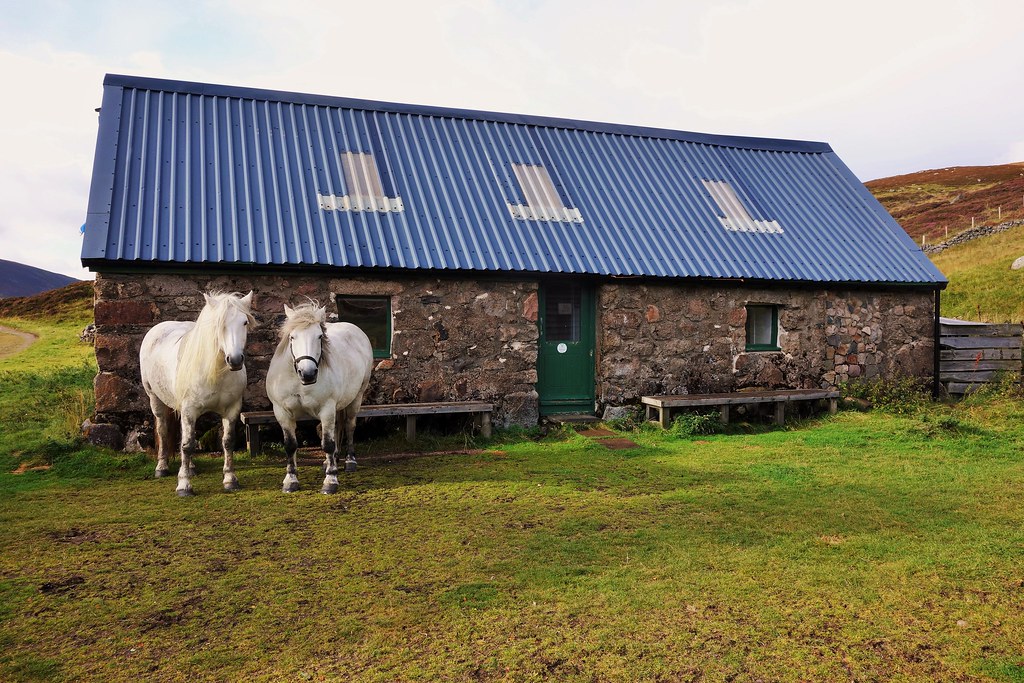 DSC05375
Day 7.
Nice easy day. Hung around the bothy with Anders till about midday before the easy 5 miles down into Braemar for another hostel stay

Day 8.
9am start on the road to Mar Lodge and then up to Derry Lodge with a bait stop at Bob Scotts bothy where surprisingly I found that a tupperware box with a loaf of bread, a dozen eggs, yoghurt and packaged meat had been left in the porch area. From there it was up to Corrour bothy arriving there just before 3pm and no one being in claimed the top bunk. About 4 John, a London lad on his first Cairngorm trip arrived followed at 6 by Matteus, a German lad who was carrying wood, so it was on with the fire for the night 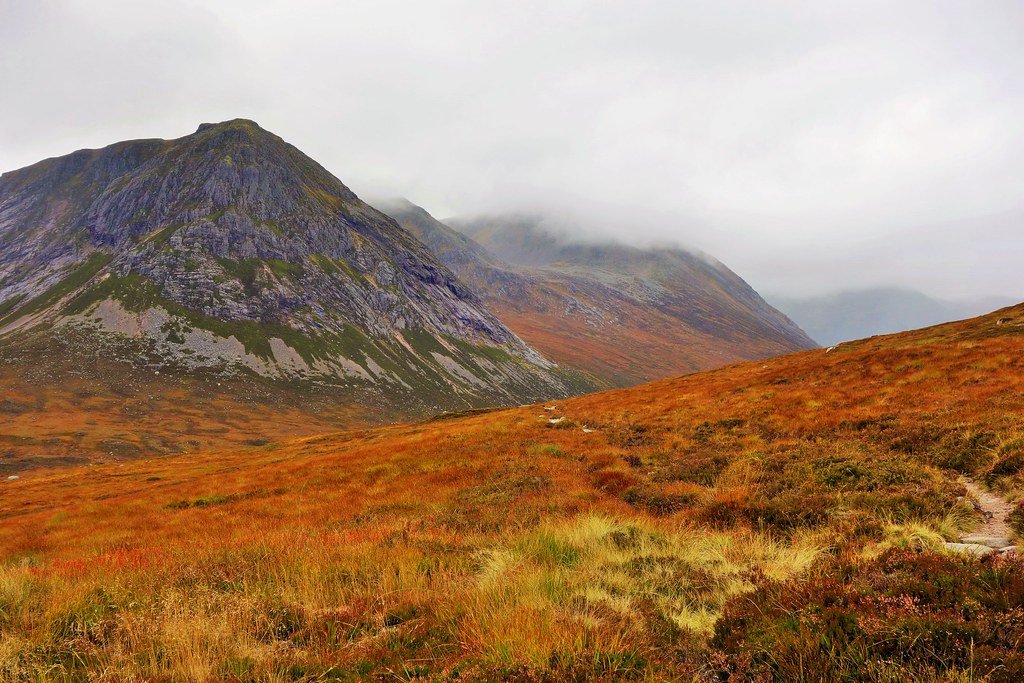 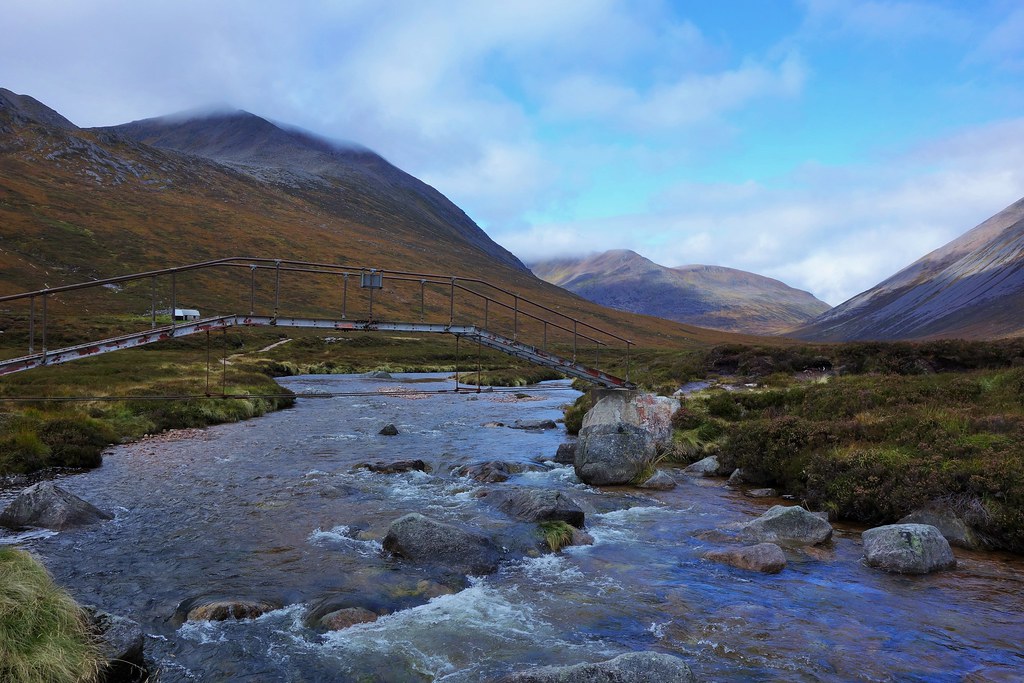 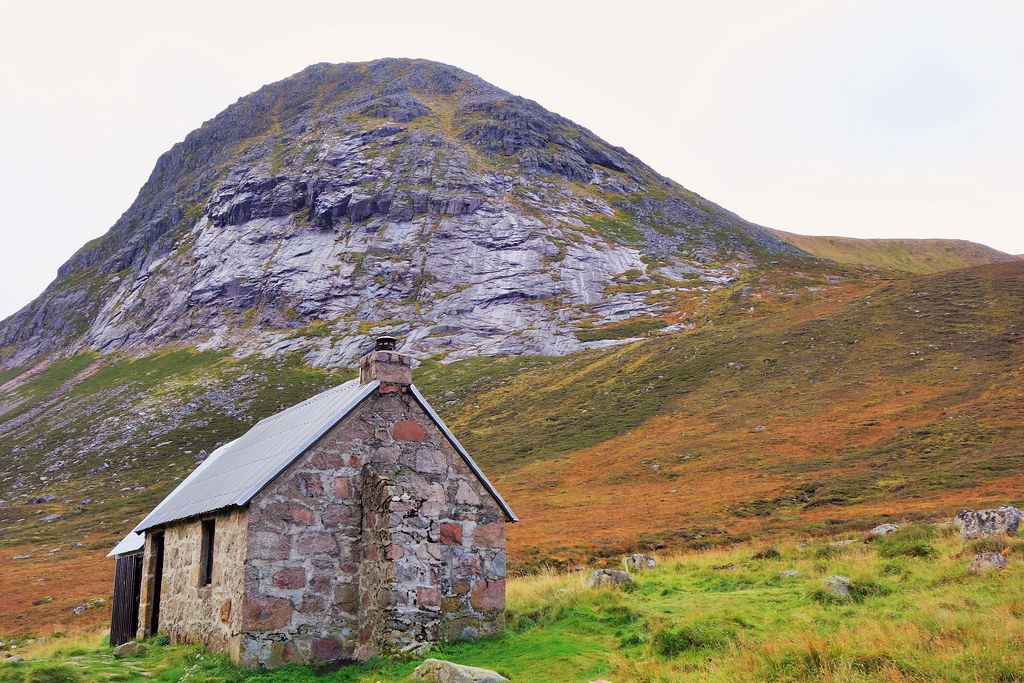 DSC05405
Day 9.
Last day, a walk over the Lairig Ghru which is always enjoyable. It was a wet start and then over by the Pools of Dee coming down in sleet. Through occasional clearances I could just make out on Cairn Toul that there was a bare covering of snow, the first of the season.With the wind blowing from the north through the Funnel of the Lairig I didn't stop until I got to the site of the old Sinclair hut and then down through the increasingly warm woodland to Coylumbridge and then road walk up to the SYHA.
Around 110 miles clocked up. Not the trip originally planned but as always hugely enjoyable and now sitting here seeing If I can squeeze another one before the end of the year. 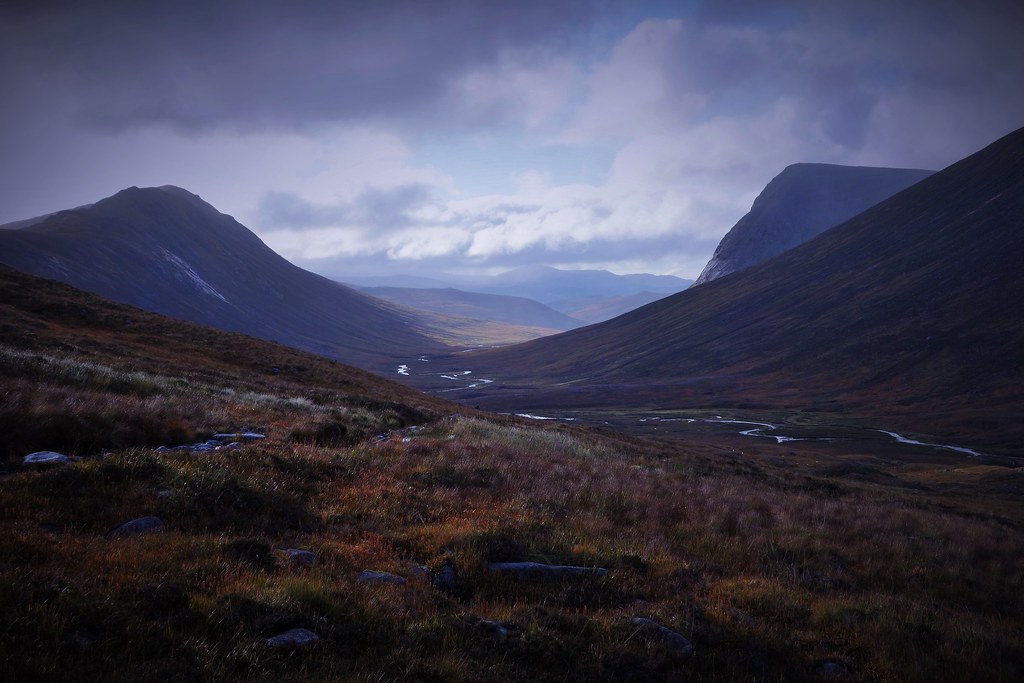 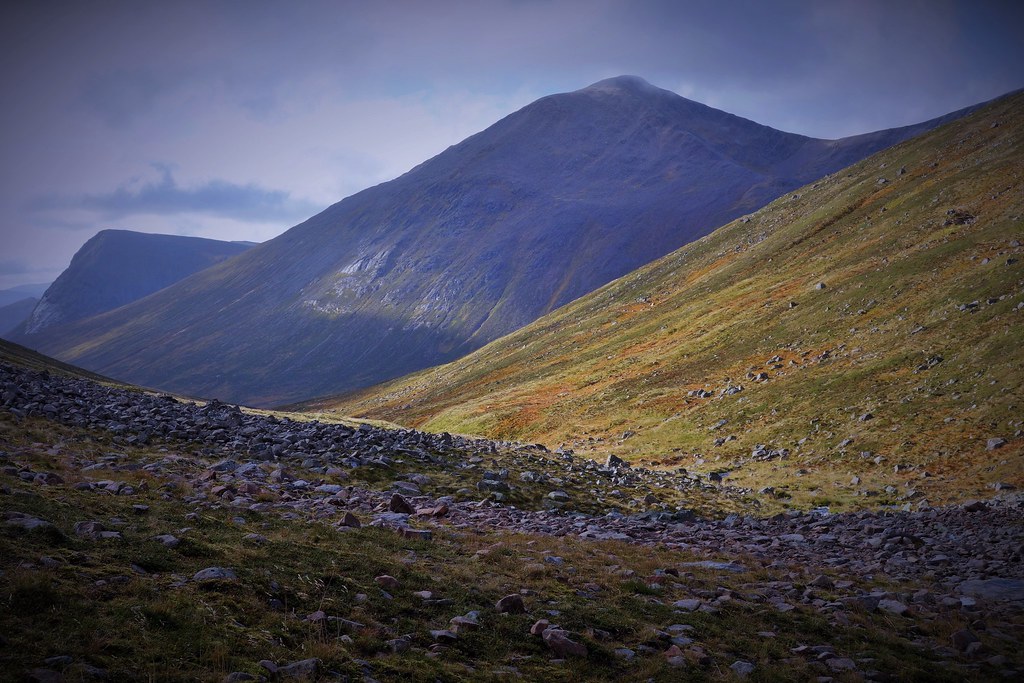 DSC05421
Click to mark this as a great report. Register or Login free to be able to rate and comment on reports (as well as access 1:25000 mapping).


In amongst the crowds on the Pike.