19_Mount_Keen_1.gpx Open full screen  NB: Walkhighlands is not responsible for the accuracy of gpx files in users posts

Being an impulse decision on a weekday, I hadn't quite set off as early in the morning as I would've hoped. This was also my first attempt using my new bike rack and (used) bike which took longer than I'd hoped and there was slushy snow on the approach to the Glen Tanar estate which also slowed me down. This was also my first attempt at a Munro on my own, having done all others with my girlfriend (she had already done Mount Keen). But being a weekday it was easy enough to get parked and at about 0915 began my cycle up the small road taking you around the estate. Immediately after I hit waist deep snow and began to wonder if taking the bike was a sensible choice...

Nevertheless I carried on and fortunately through the forest track the snow thinned out and began making steady progress, although it had been many years since I rode a bike I found it surprisingly physical, something I had put down to the poor state of the bike I had bought second hand and my own poor state of fitness. Once through the forest track, the landscaped opened up into the beautiful Glen Tanar valley. After taking a few photos, I continued along and immediately found myself in a few inches of snow. The bike coped alright with this though. 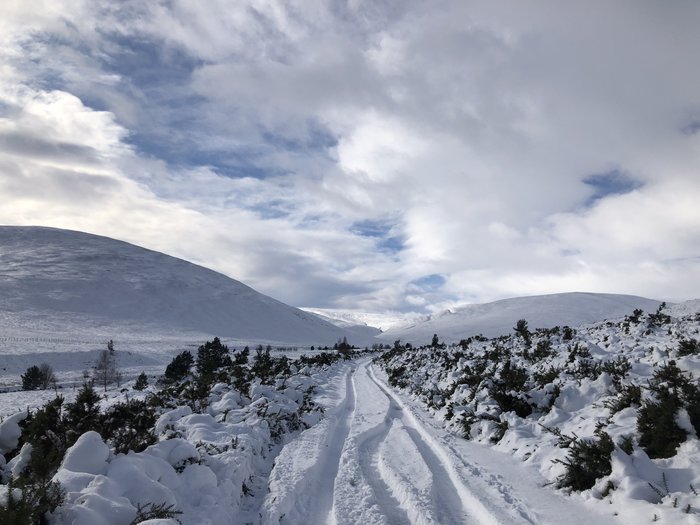 After crossing a bridge and old stalkers cottage at Etnach, Mount Keen was coming into view at last, but the snow getting ever deeper and really slowing me down. Soon the snow was knee deep and iced over between a narrow track in places, meaning I had no option but to carry the bike through by lifting up the front wheel and wheeling it along on the back wheel only. At this point the bike was essentially useless so at the second granite bridge just before the straight path to the third bridge at the foot of Mount Keen, I ditched the bike and set out on foot. 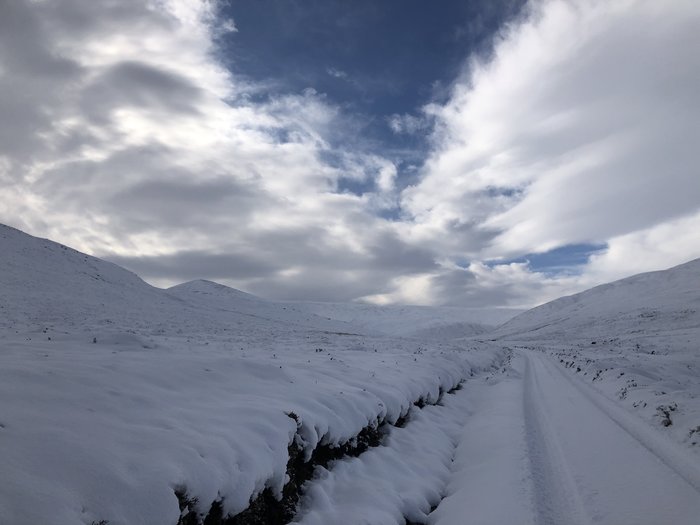 During the walk up to the third bridge, Mount Keen came into full view, with the wind strongly scouring its easterly face. I'd been mostly sheltered from the wind in the valley but it was now clear to see. But the sun was out on what most would describe as a perfect sunny winters day. However, there was a problem. I was being very conscious of time and with the remoteness of where I was, having not seen a soul since leaving the Glen Tanar estate, I slowly had the dawning realisation that despite the fact it was only 1pm by this stage, I was cutting it tight for time. I crossed the third bridge to take a better look at the approach path up the hill and it immediately became apparent with waist deep snow and no visible path that today was not the day to make the ascent. I was gutted. I decided to take in the views, the sun making a full appearance and shining down on me whilst having my sandwiches and what had been trepidation at the remoteness of where I was, became a peacefulness knowing I had the whole of the Glen Tanar valley to myself for the day. 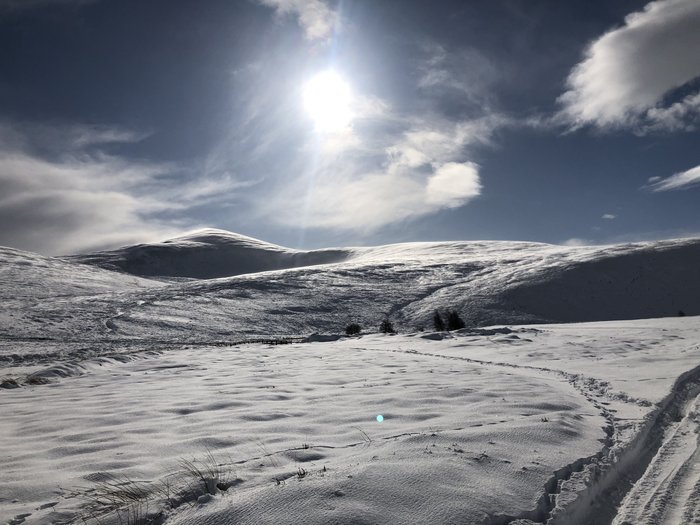 I flew my drone around for a half hour, getting some fantastic shots of the various animal tracks and landscape, and got my camera out for good measure before heading back to pick up the bike. Once getting back on the bike, it was at this stage I realised I'd made a mistake. After a short climb back up to the forest path, it became apparent that my earlier difficulty cycling in was entirely due to the fact that I'd been cycling uphill quite gradually, which wasn't as obvious to me at the time somehow. I don't remember pedalling much from the forest back to Glen Tanar but frequently slid off the bike because of snow and ice, which was actually quite fun because I couldn't really get up to any dangerous speeds. It took less than half an hour to get back to the car making it 1430 by the time I got back to the car, with a bum in tatters. Lessons learned;
1. Set off earlier
2. Be more aware of gradients
2. Come back to Mount Keen on a day with less snow
3. Get a new bike saddle
4. Having a valley to yourself is a truly peaceful experience.

Full Drone footage and camera photos to follow...
Click to mark this as a great report. Register or Login free to be able to rate and comment on reports (as well as access 1:25000 mapping).