For sometime I'd held a strong interest in traversing the main south Glencoe Ridge lines from east to west. I think the inspiration for this trip came partly from some great photos in one of Colin Prior's landscapes books, in which a few show the approximate 'v' shape made up of Buachaille Etive Mor and Bidean Nam Bian. I was also very keen to combine the ascents of both Curved Ridge on Stob Dearg (Buachaille Etive Mor) and of Sron Na Lairig on Bidean Nam Bian in completing this traverse.

Taking the very handy and much appreciated CityLink bus from Glasgow to Glencoe Ski Centre I started out at 6 p.m. on Saturday 13th of July across Rannoch Moor to the foot of Stob Dearg. Conditions were calm, warm and pleasant, with surprisingly very few midges around. 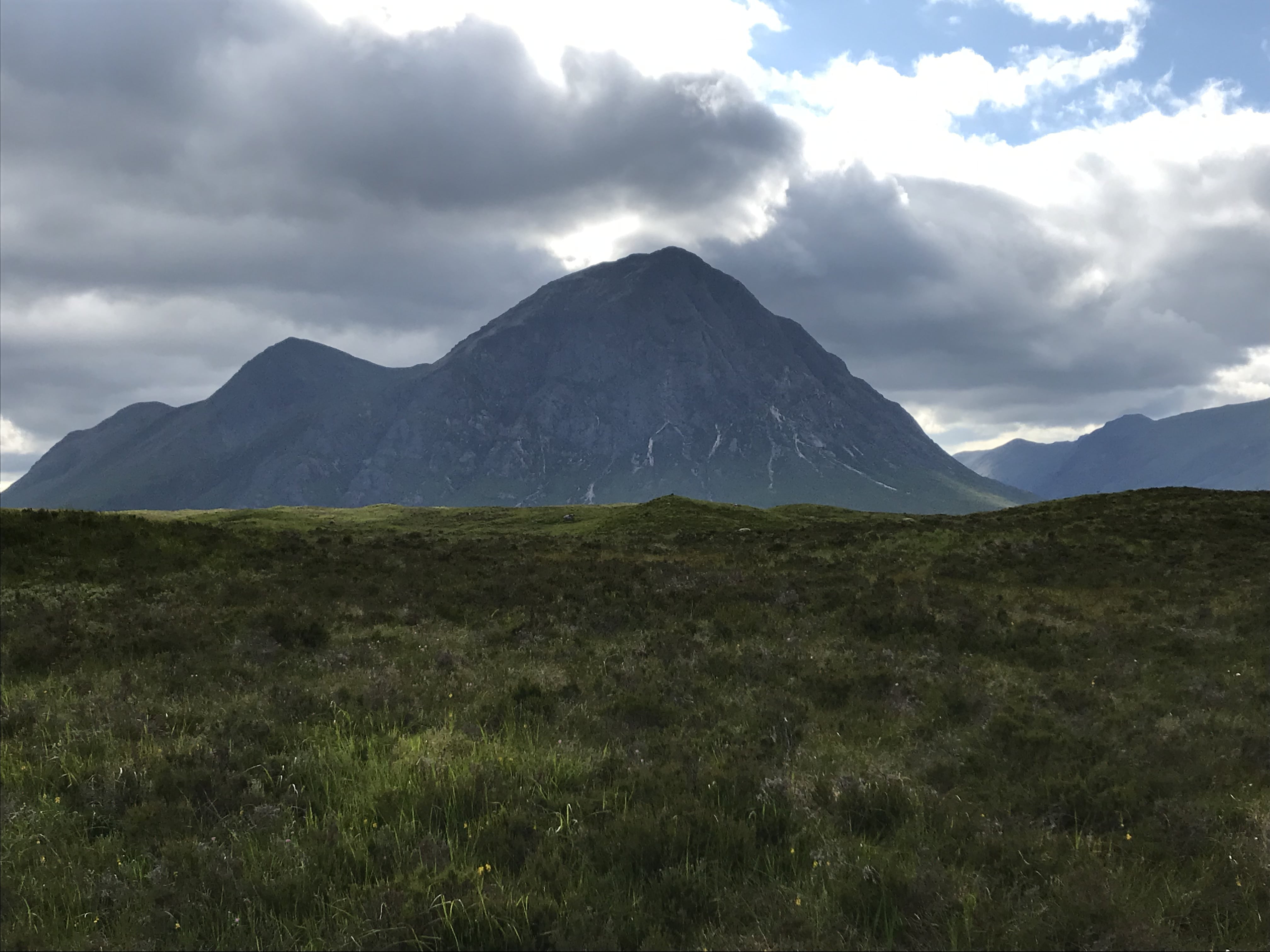 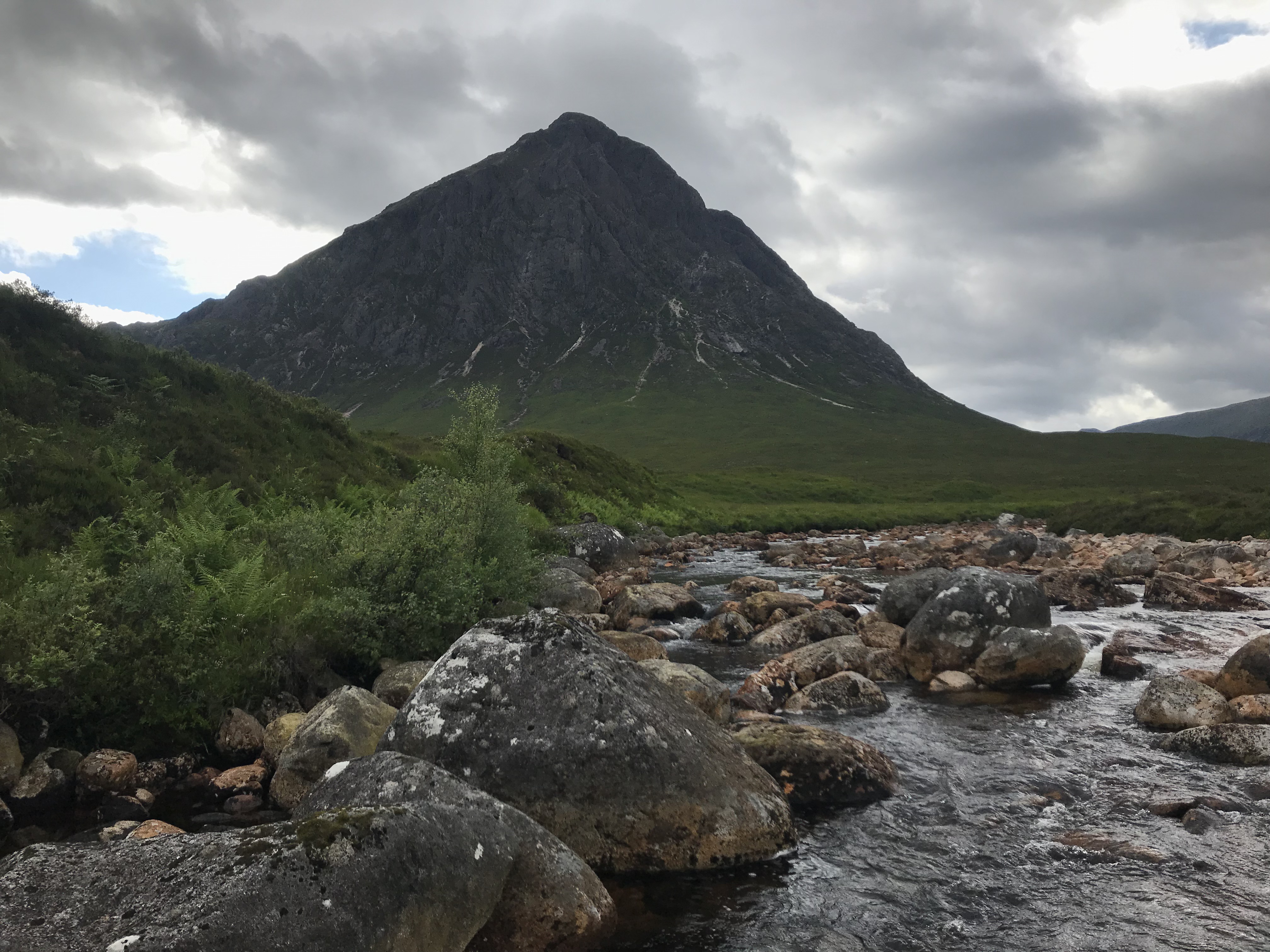 Given the late time of day I was fortunate to have Curved Ridge all to myself - a really lovely experience for a change. The rock was wonderfully dry and grippy. 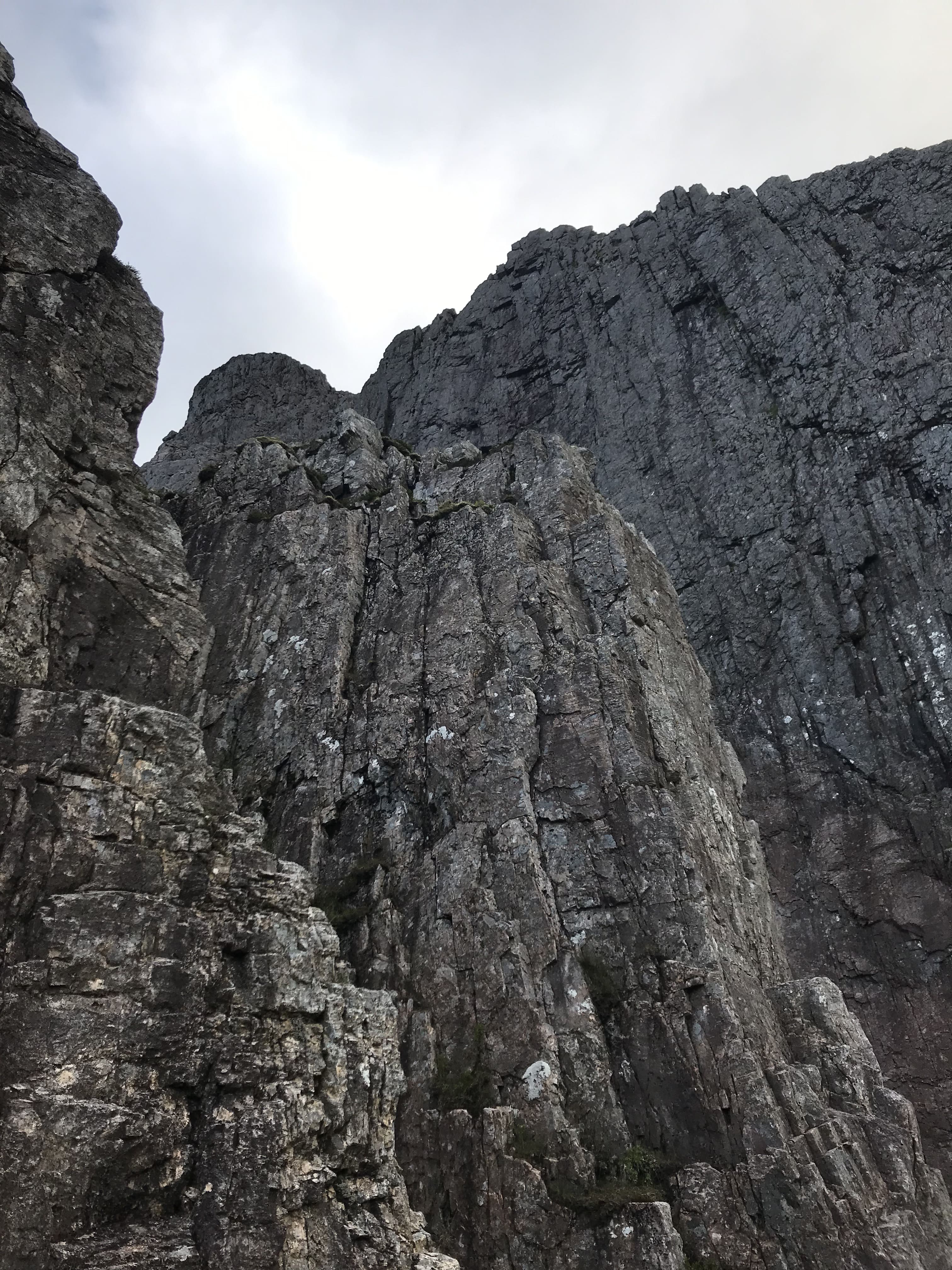 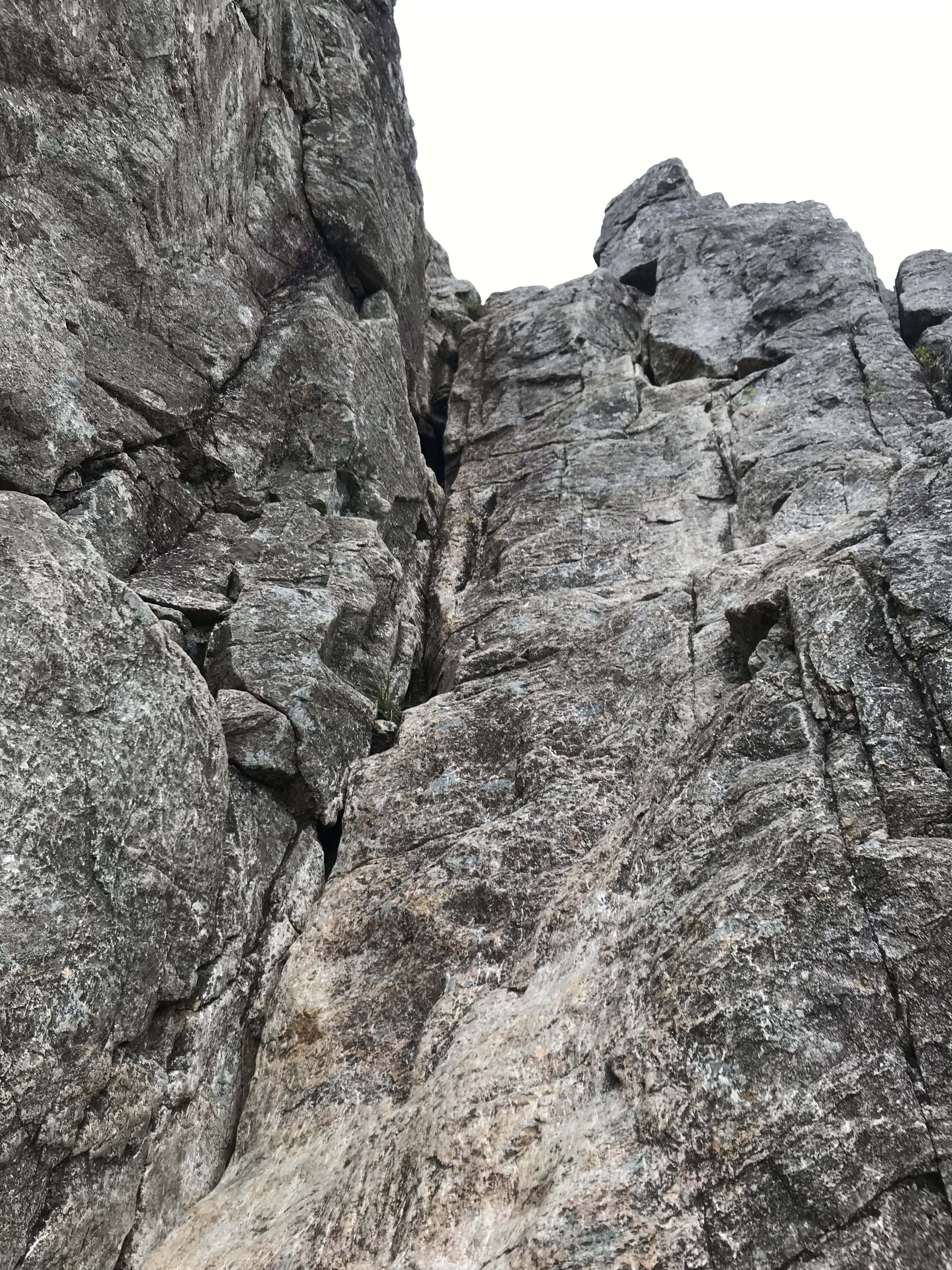 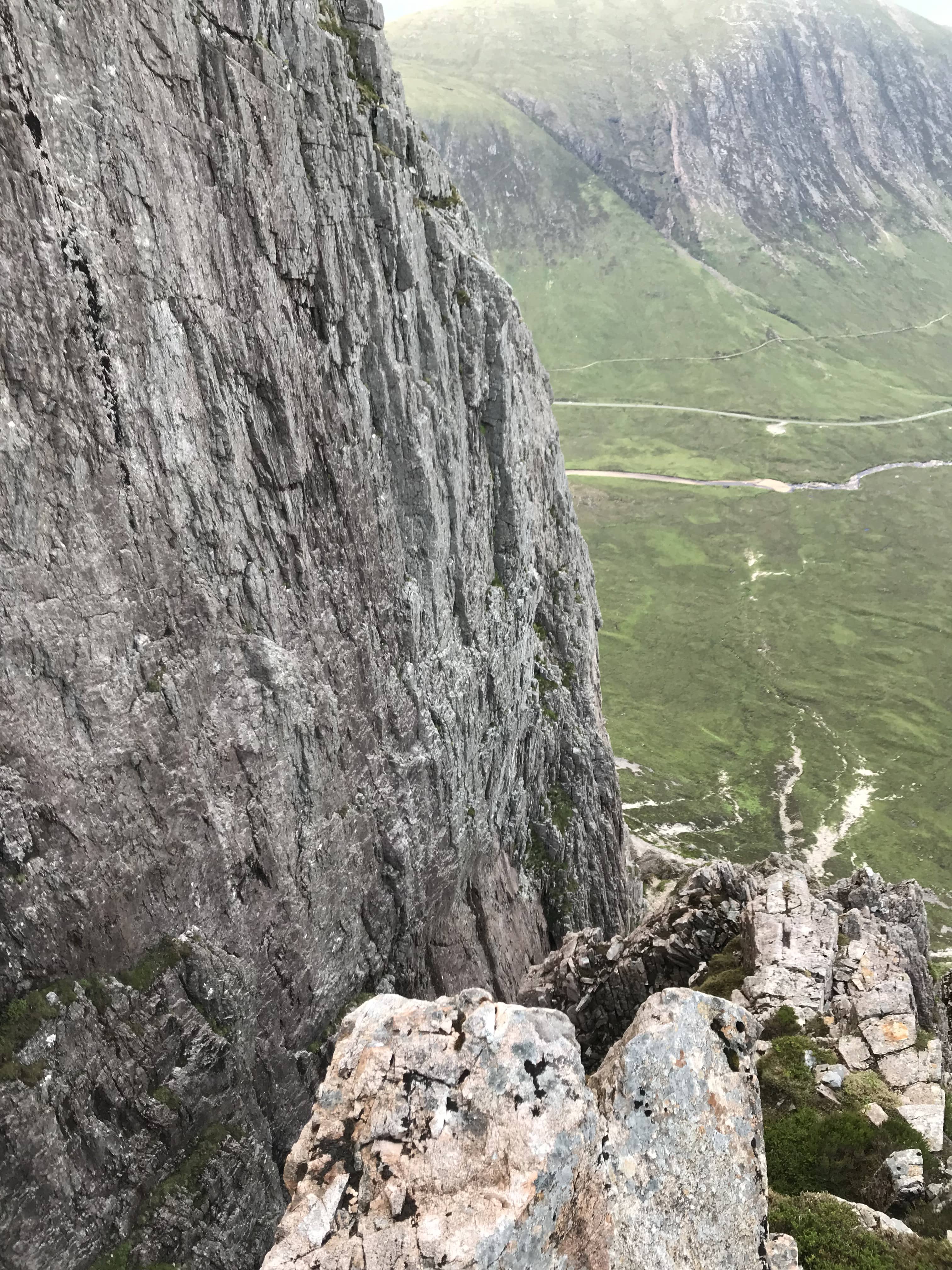 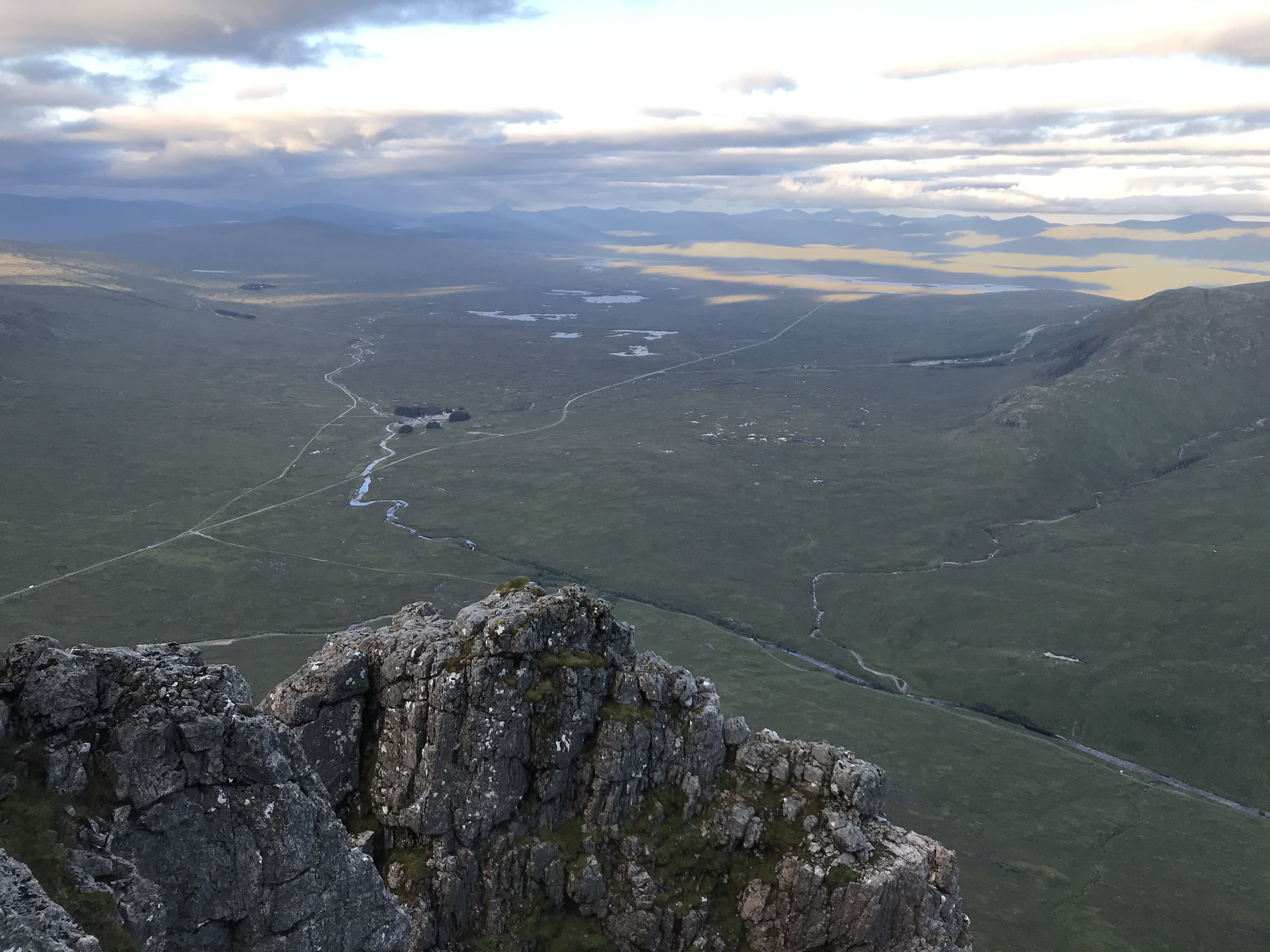 Summiting Stob Dearg at around 9 p.m. I continued along Buachaille Etive Mor's long and attractive back ridge towards the Buachaille's 'second' Munro, Stob Na Broige where I laid out my bivvy bag and settled down for the night. Night-time conditions were exceptional, with the moon high and bright and the pale ghostly outlines of Ben Starav, Ben cruachan and Loch Etive clear from where I lay. 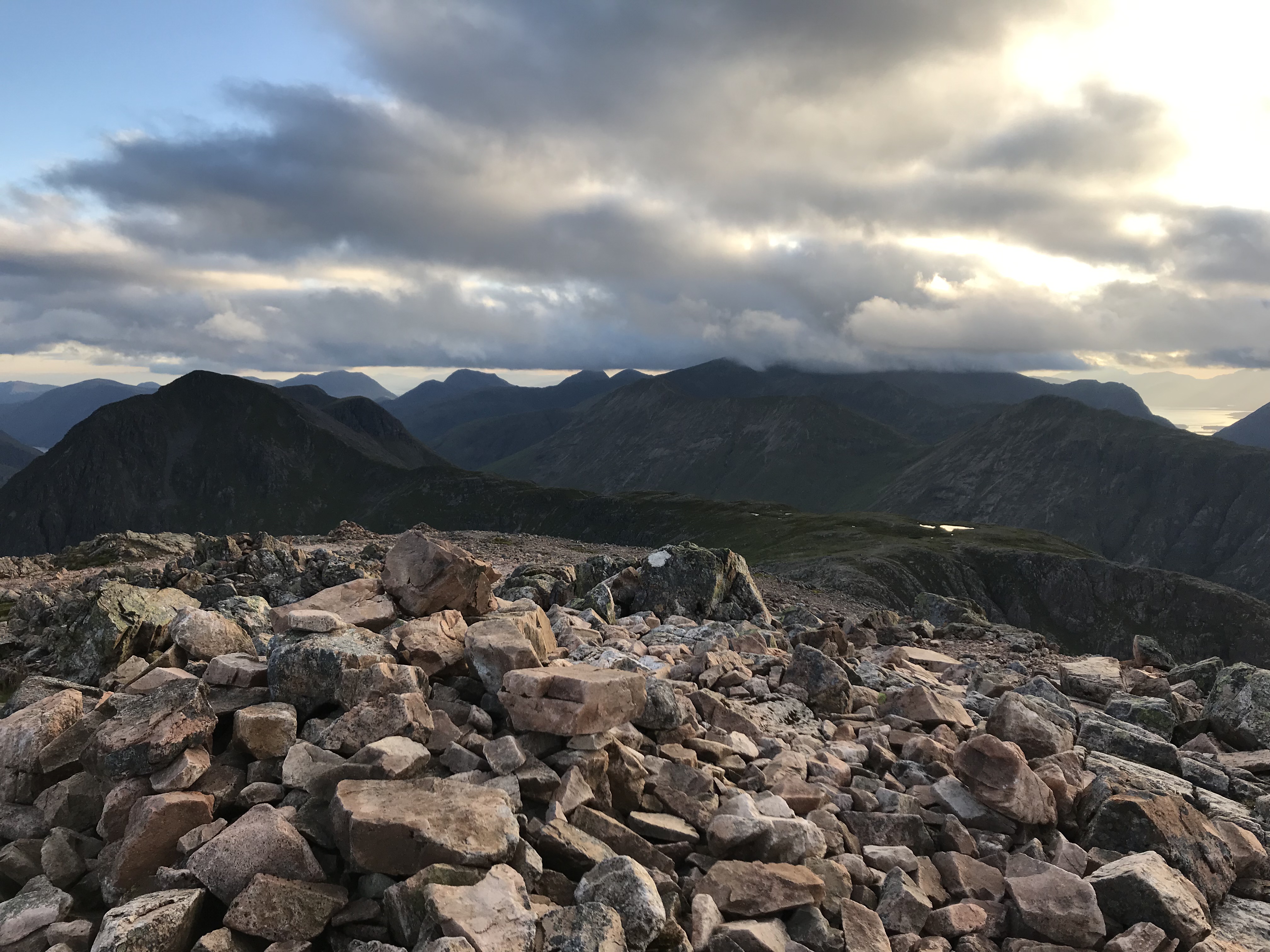 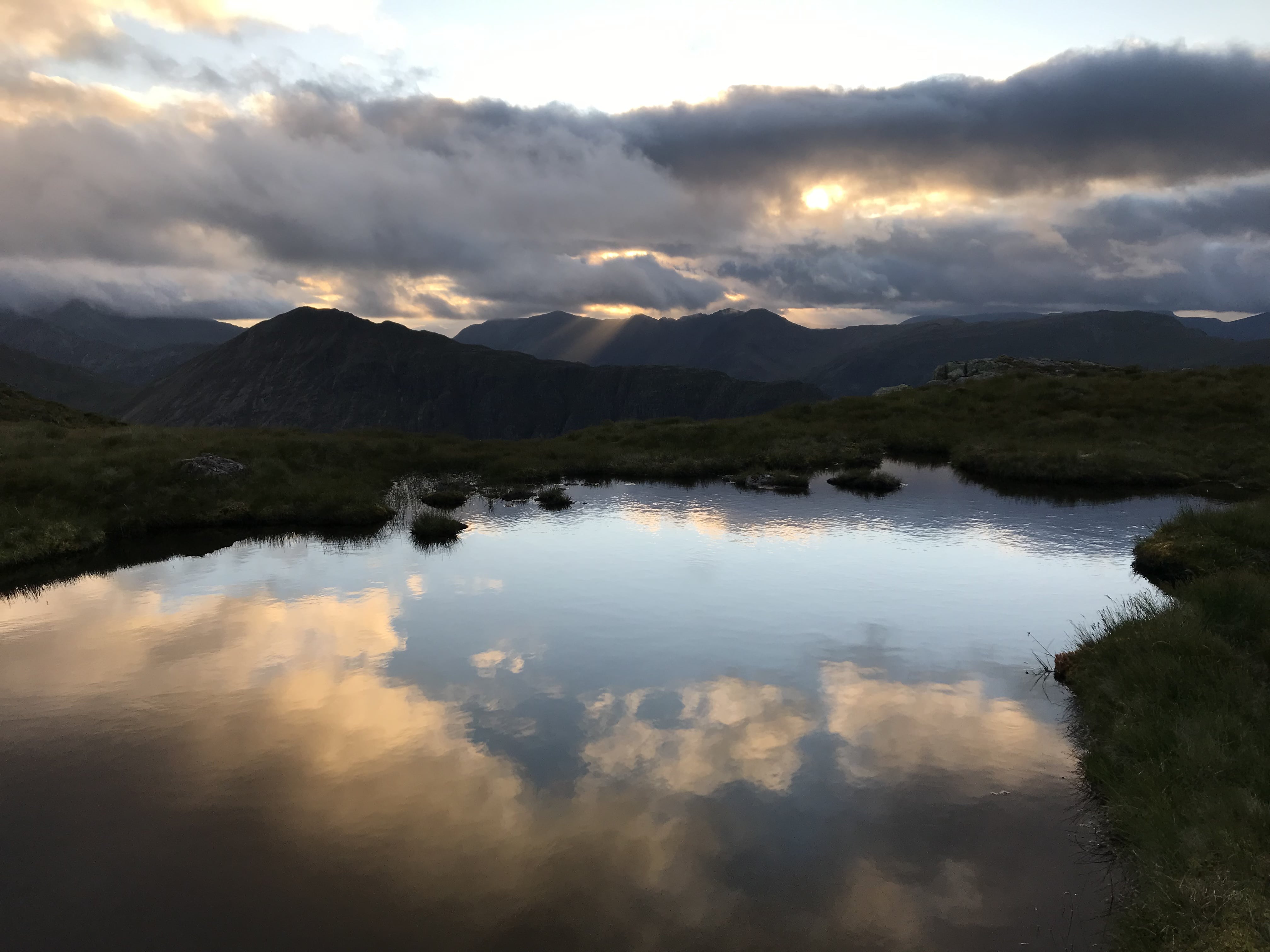 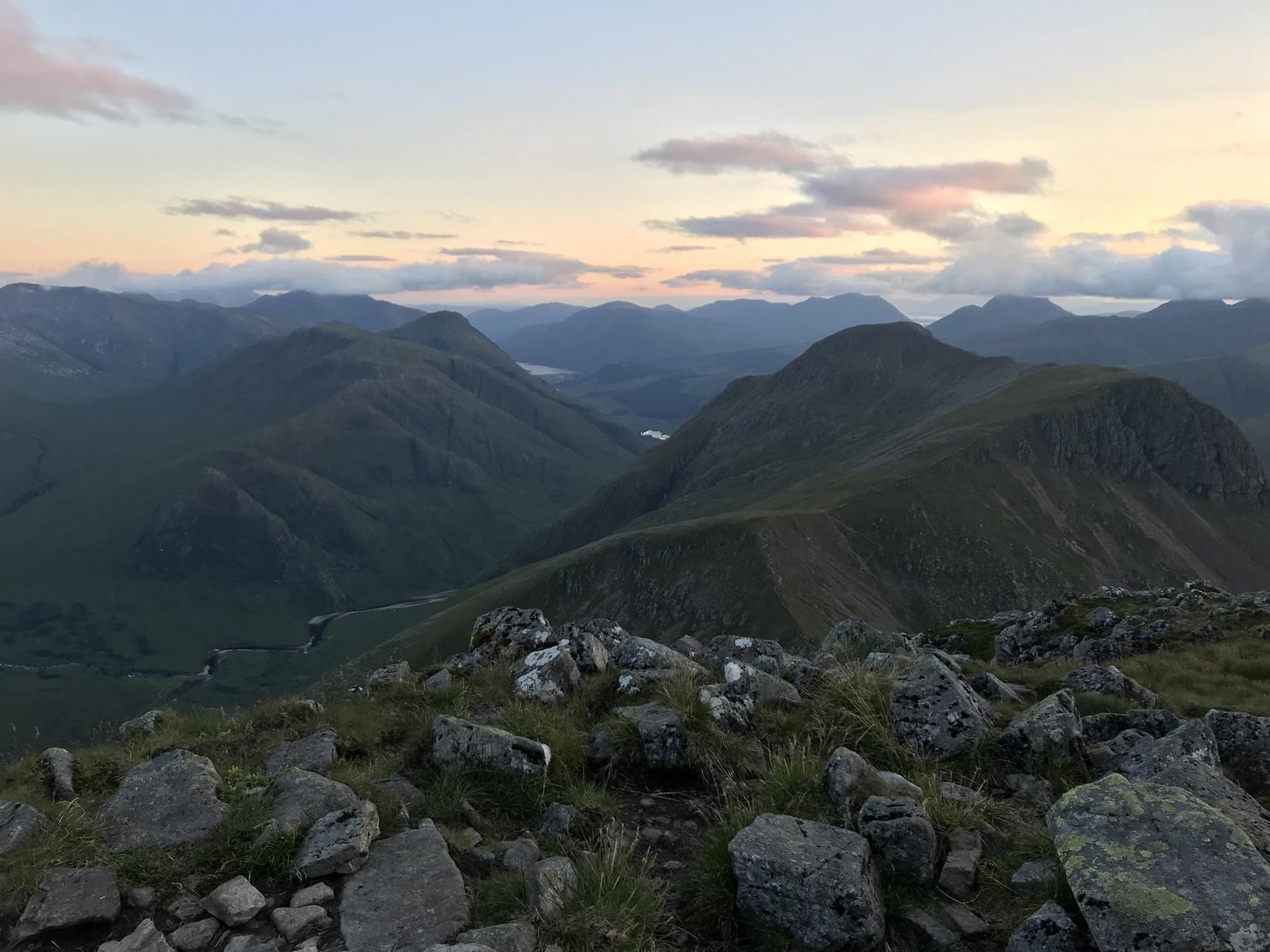 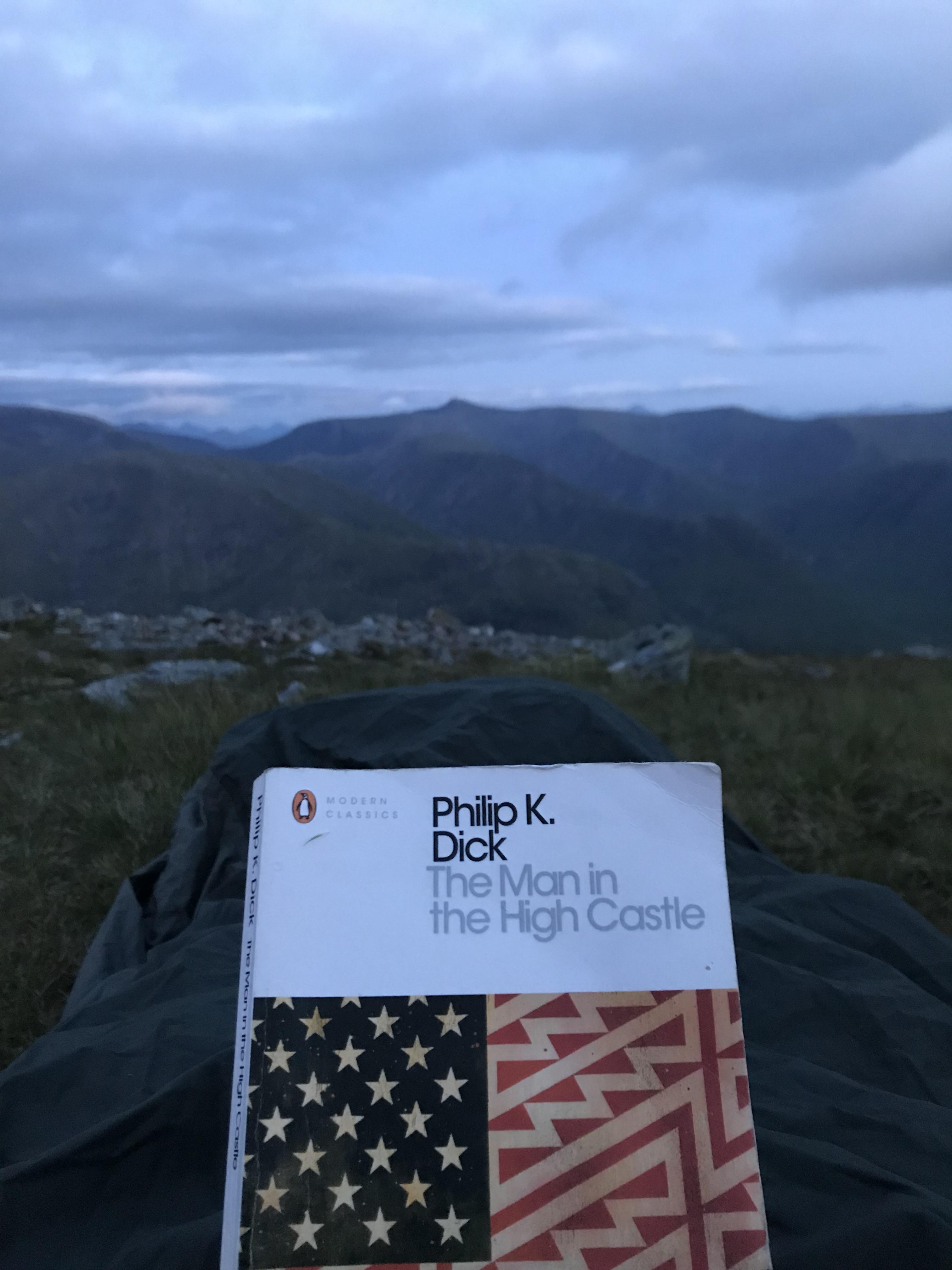 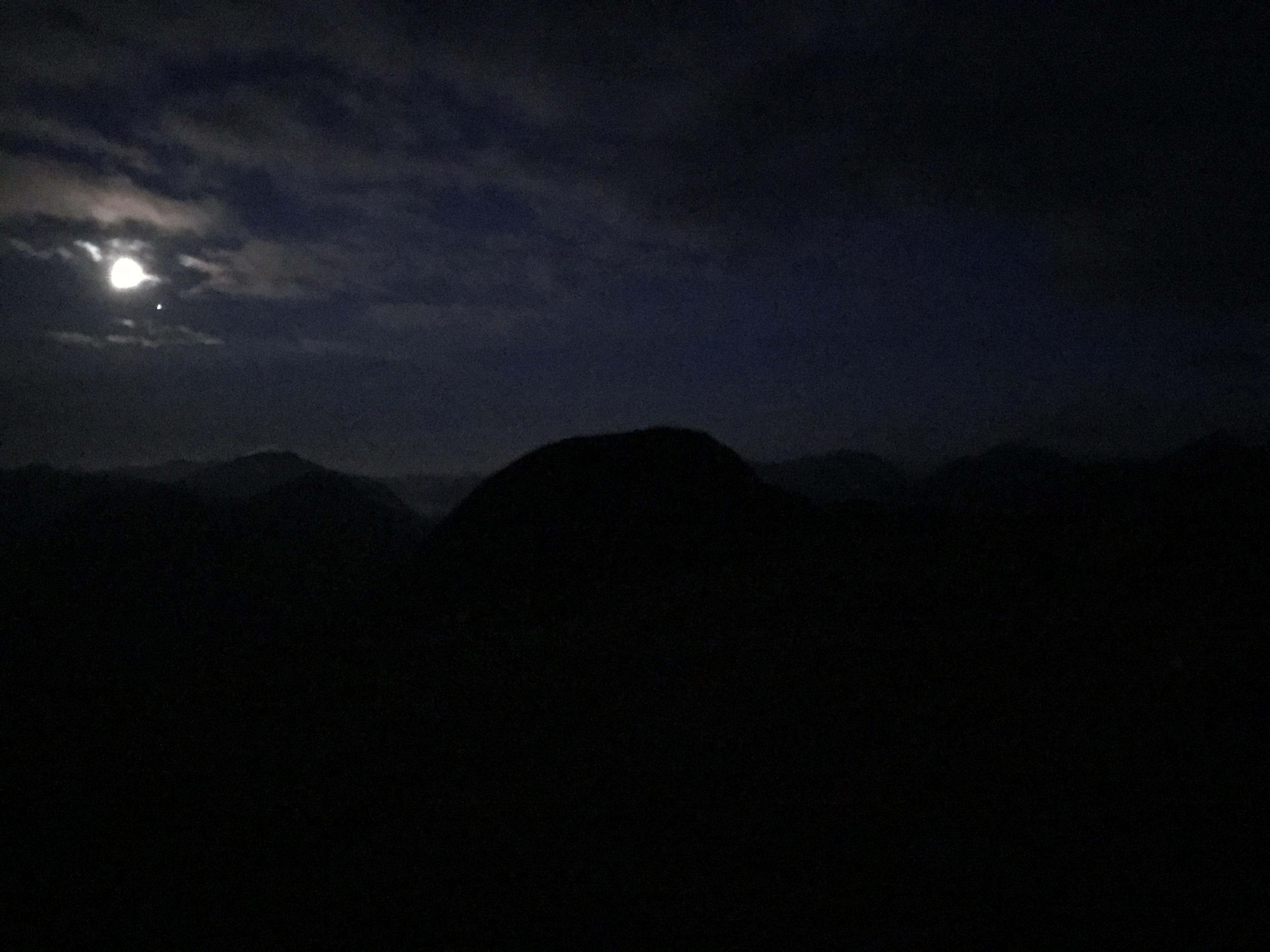 Good Fortune continued the following morning when at 5 a.m. I awoke to a truly glorious sunrise with barely a cloud in the sky to be seen. Bidean Nam Bian to the west and the Mamores to the North were bathed in a beautiful golden light; it was really quite staggering. 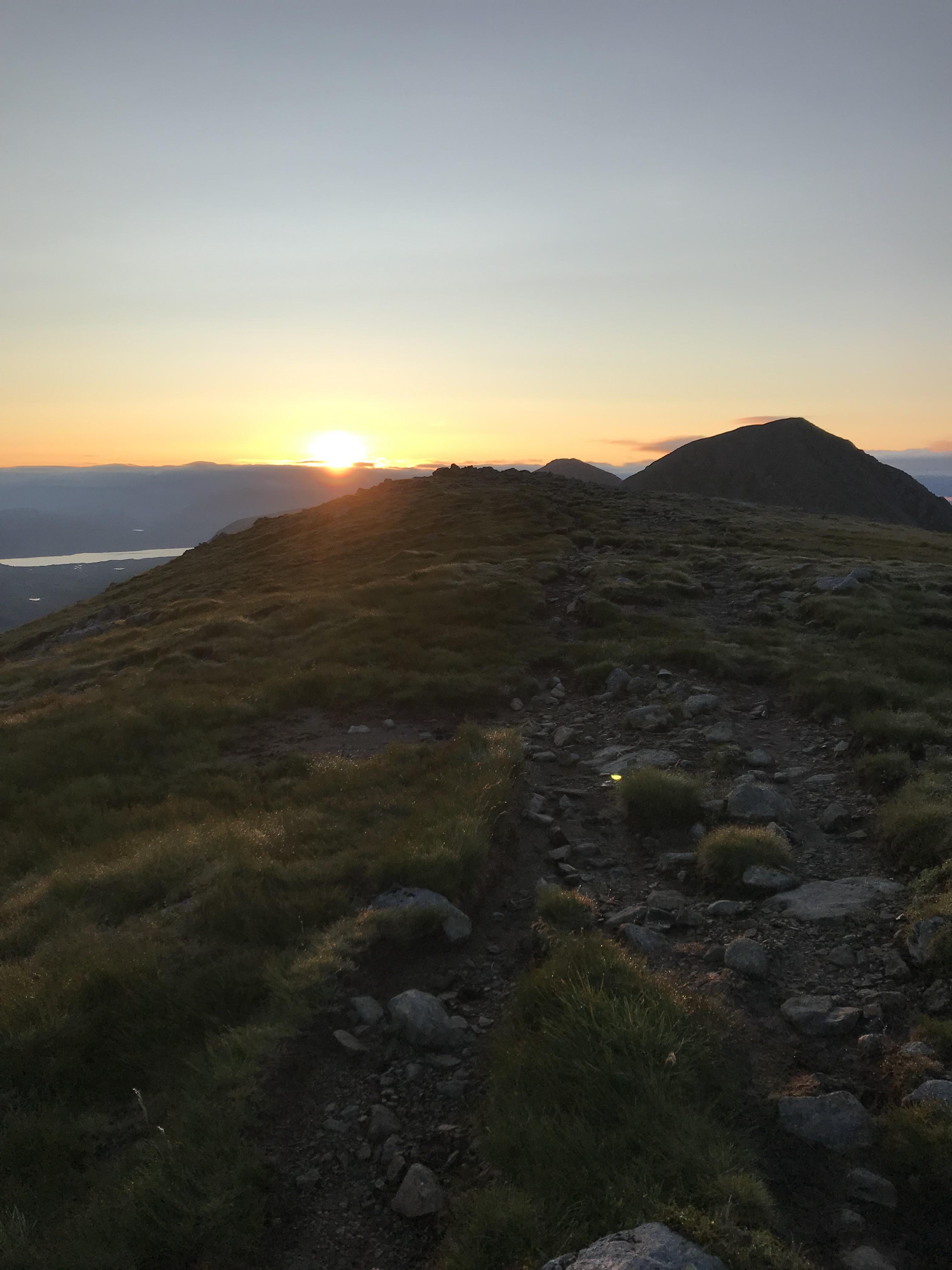 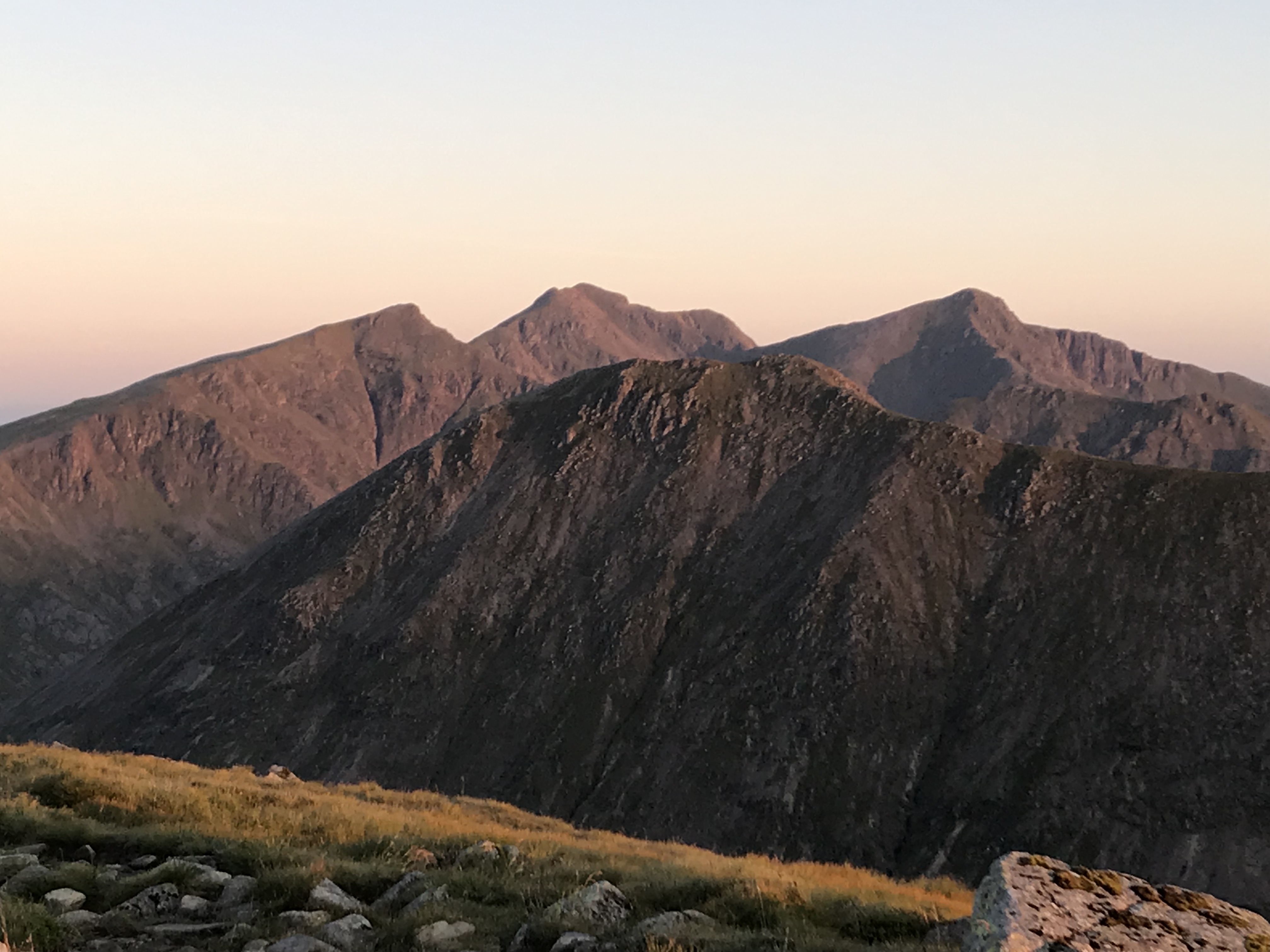 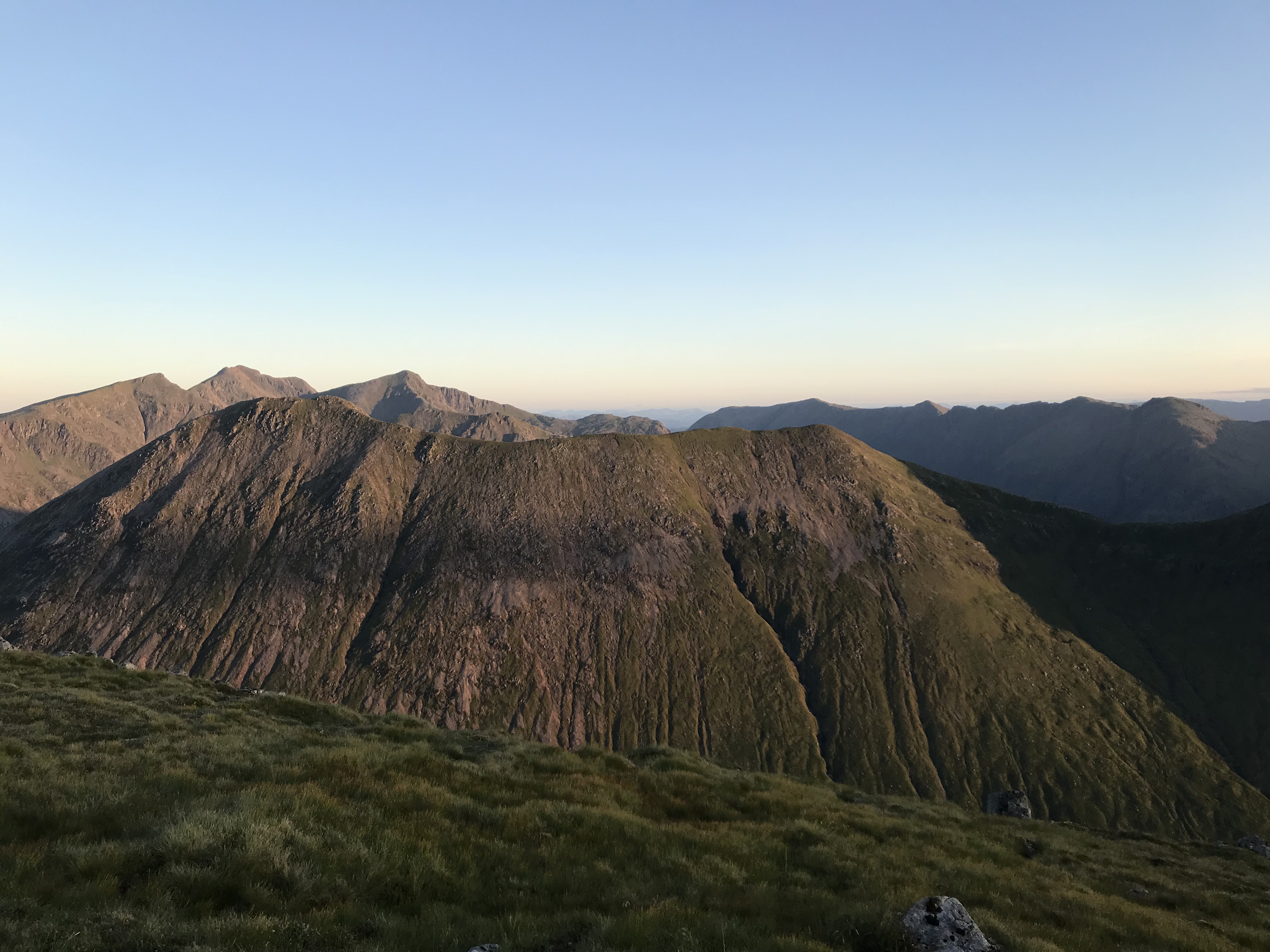 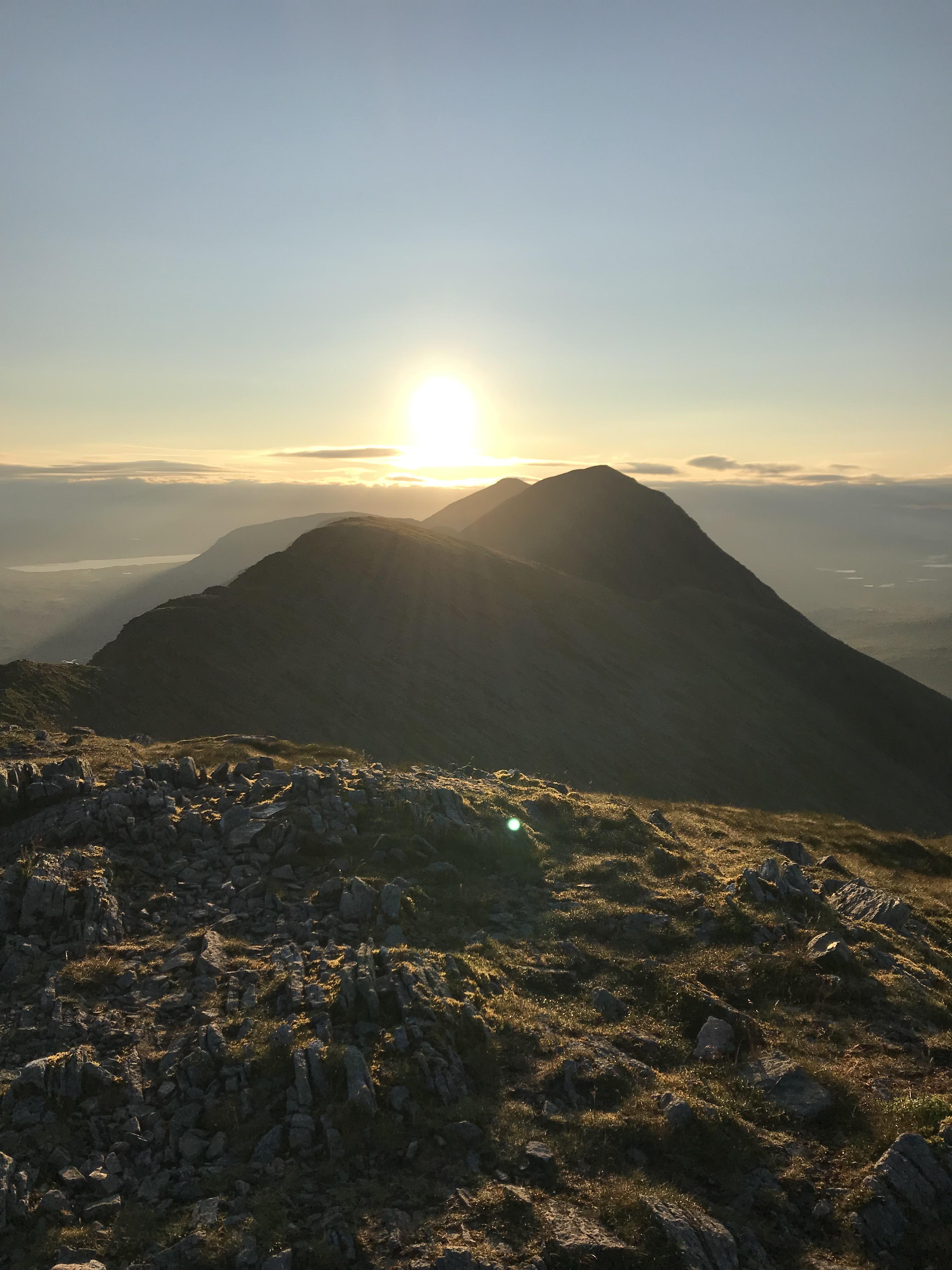 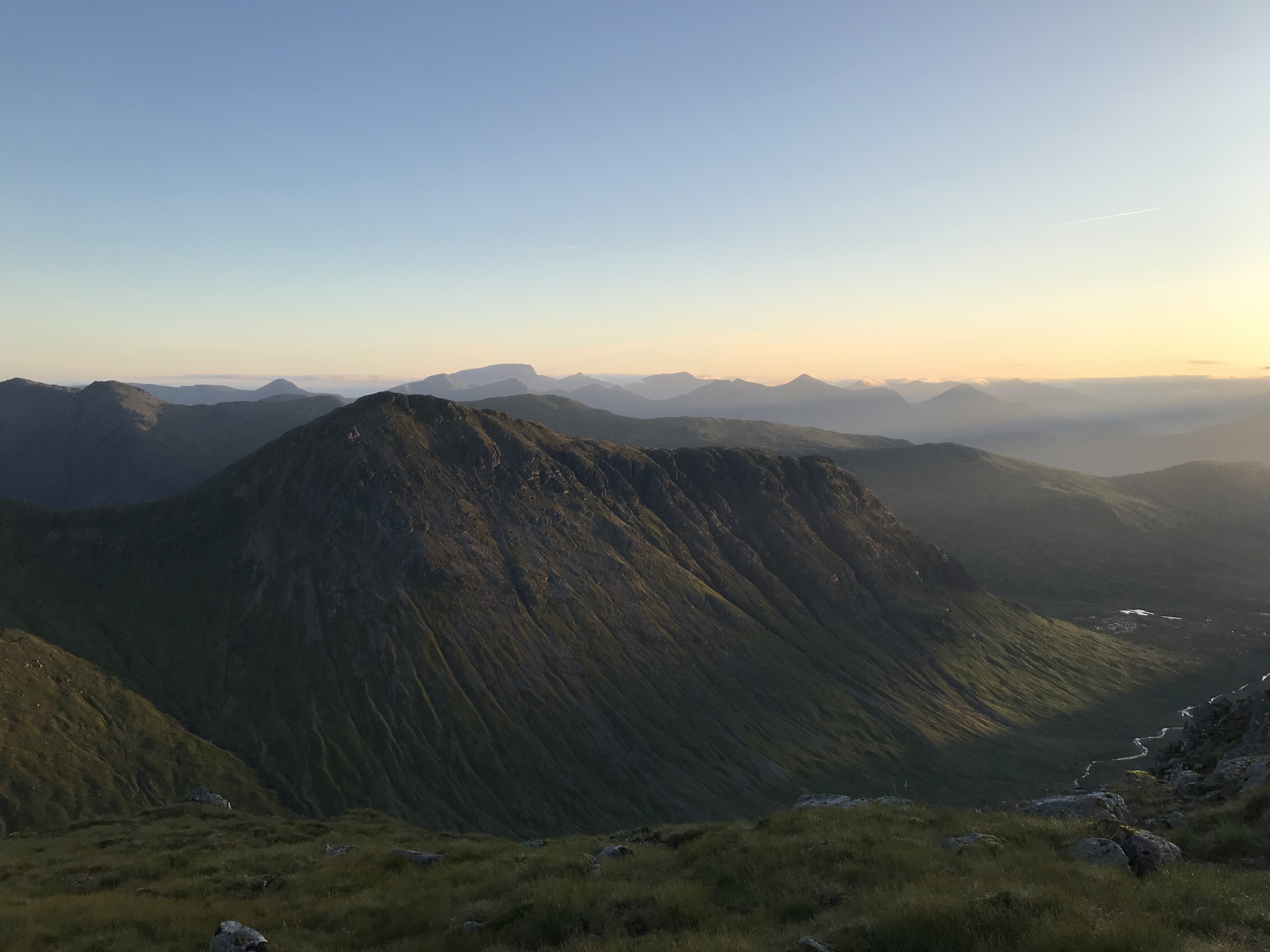 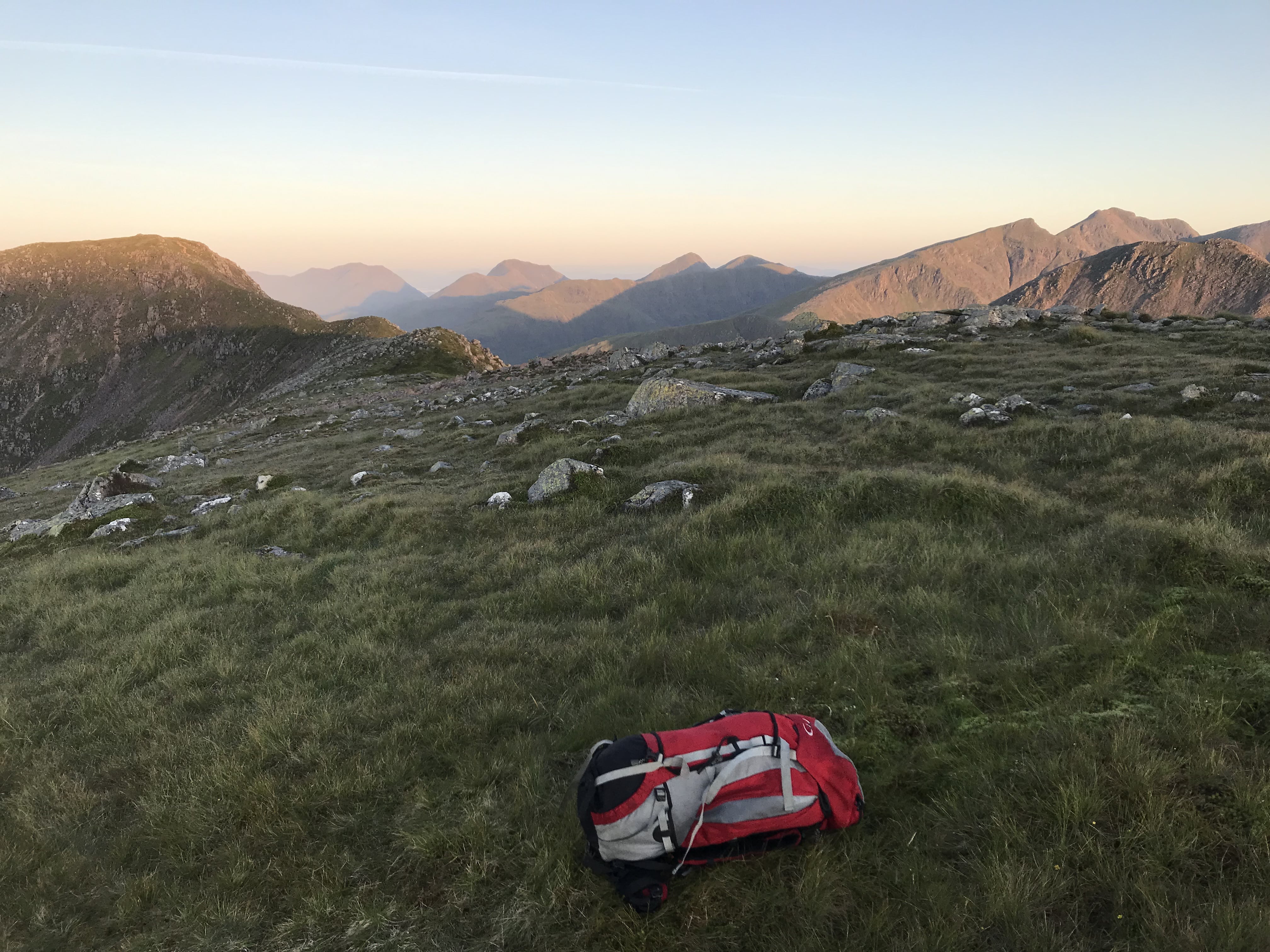 The first task of this new day was to descend steeply from the northwest flank of Stob Na Broige down to the col of Lairig Gartain. To maintain elevation I traced my way around the southern nose of Buachaille Etive Beag's to arrive at the high col of Lairig Eilde; from there I could see and was tremendously excited to soon be scrambling up the Sron Na Lairig ridge, a shapely grade 2 scramble. The ridge was quite delightful, eventually narrowing into an airy staircase quite reminiscent of the Aonach Eagach ridge. 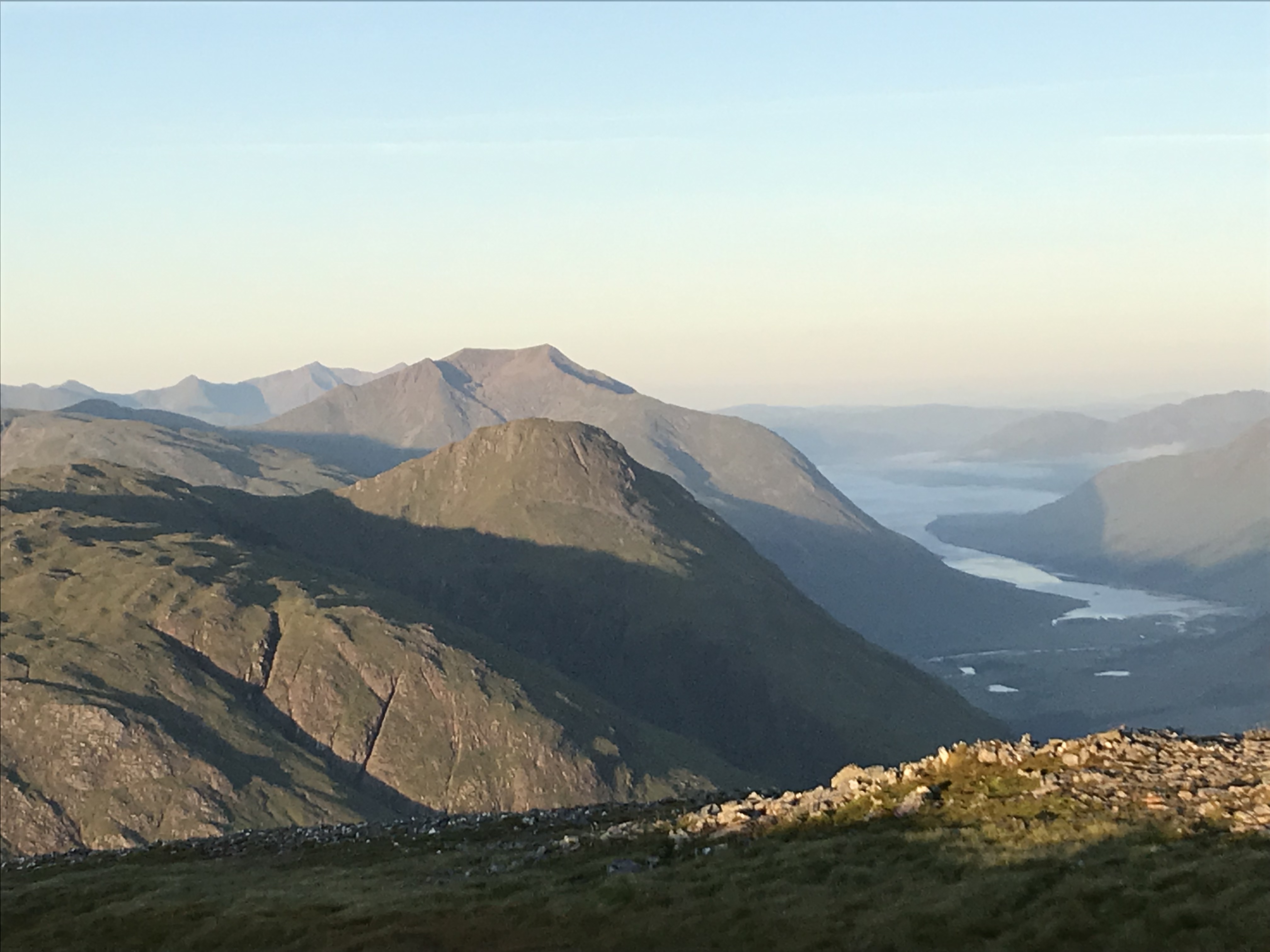 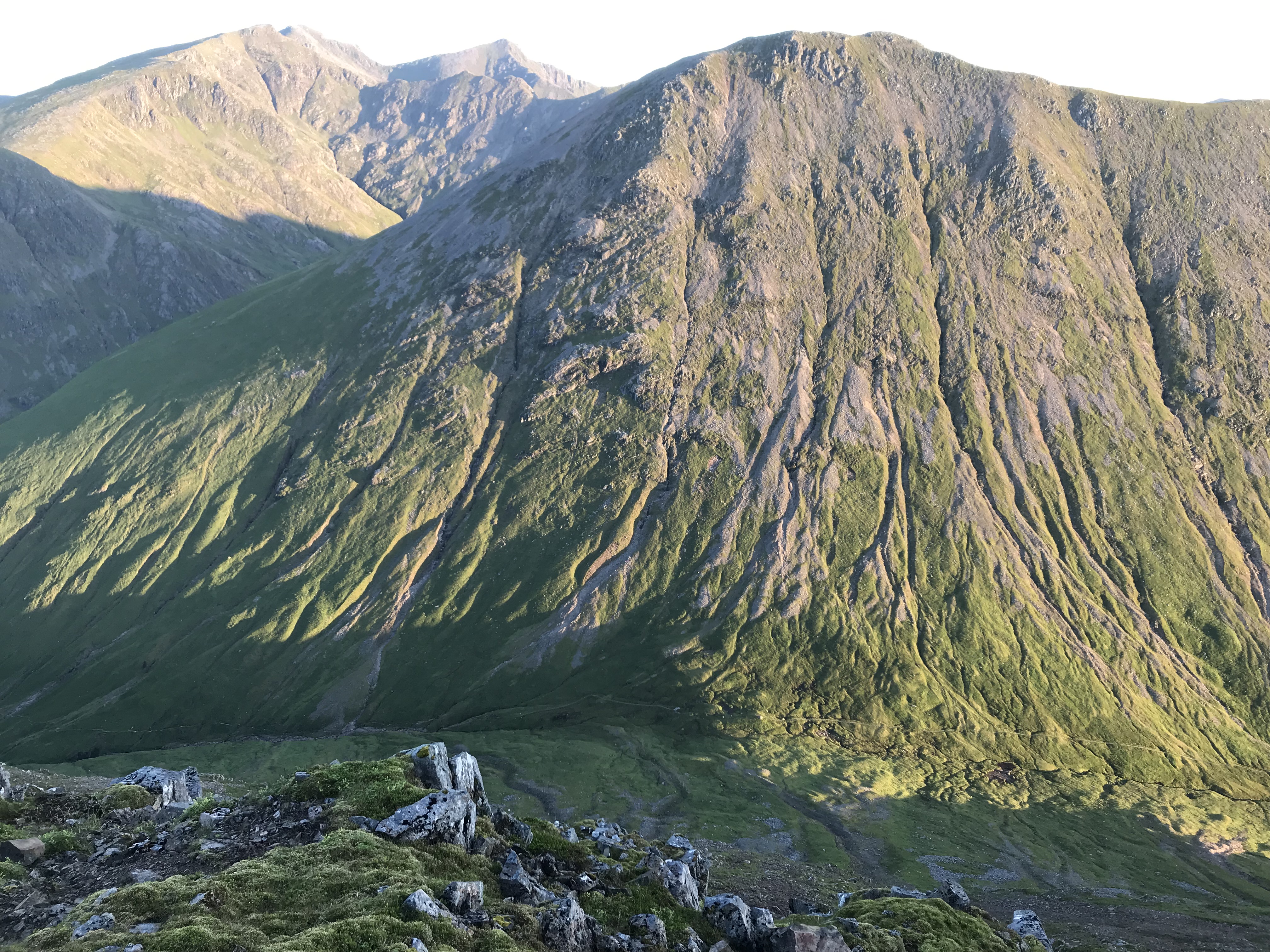 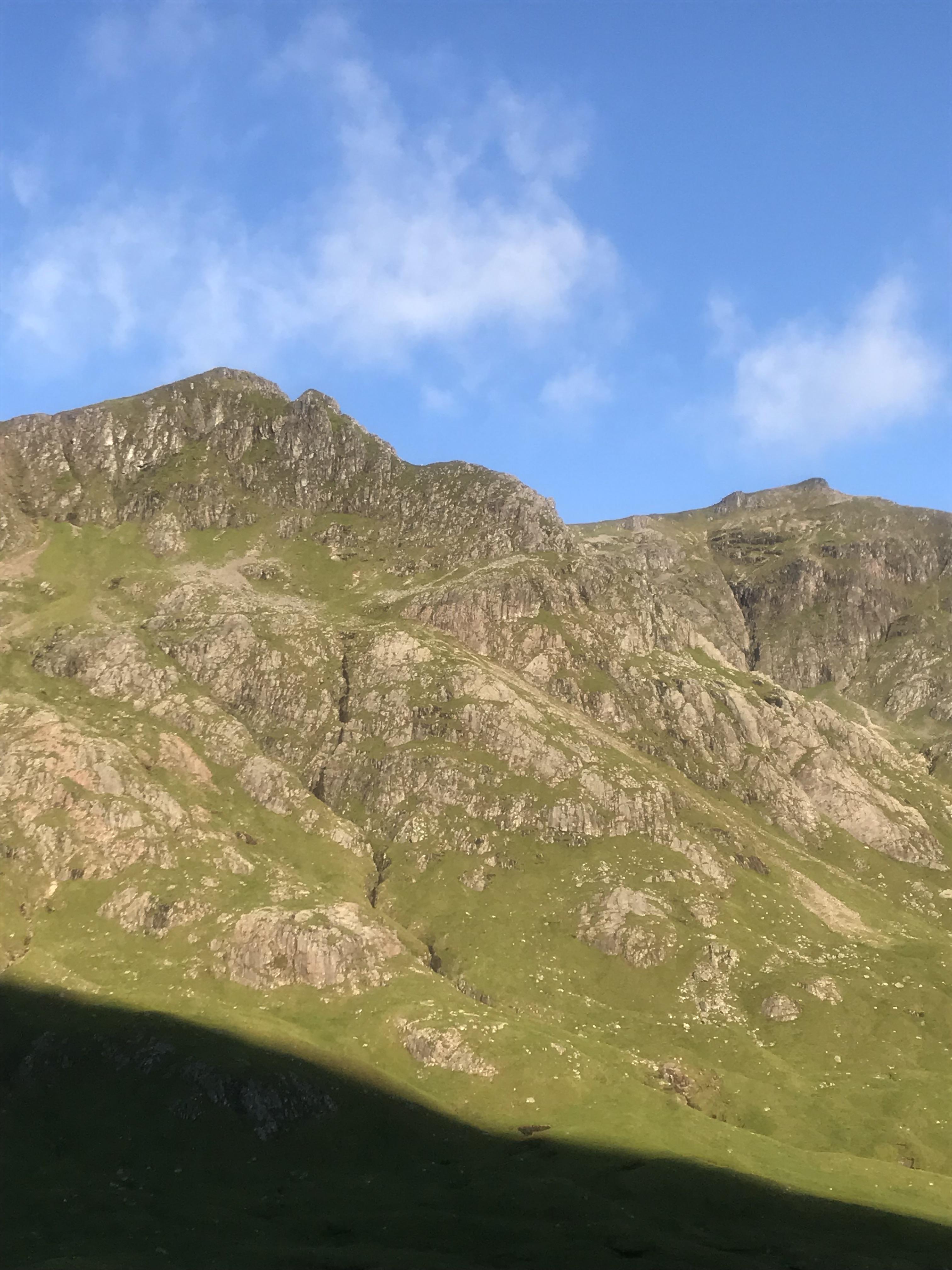 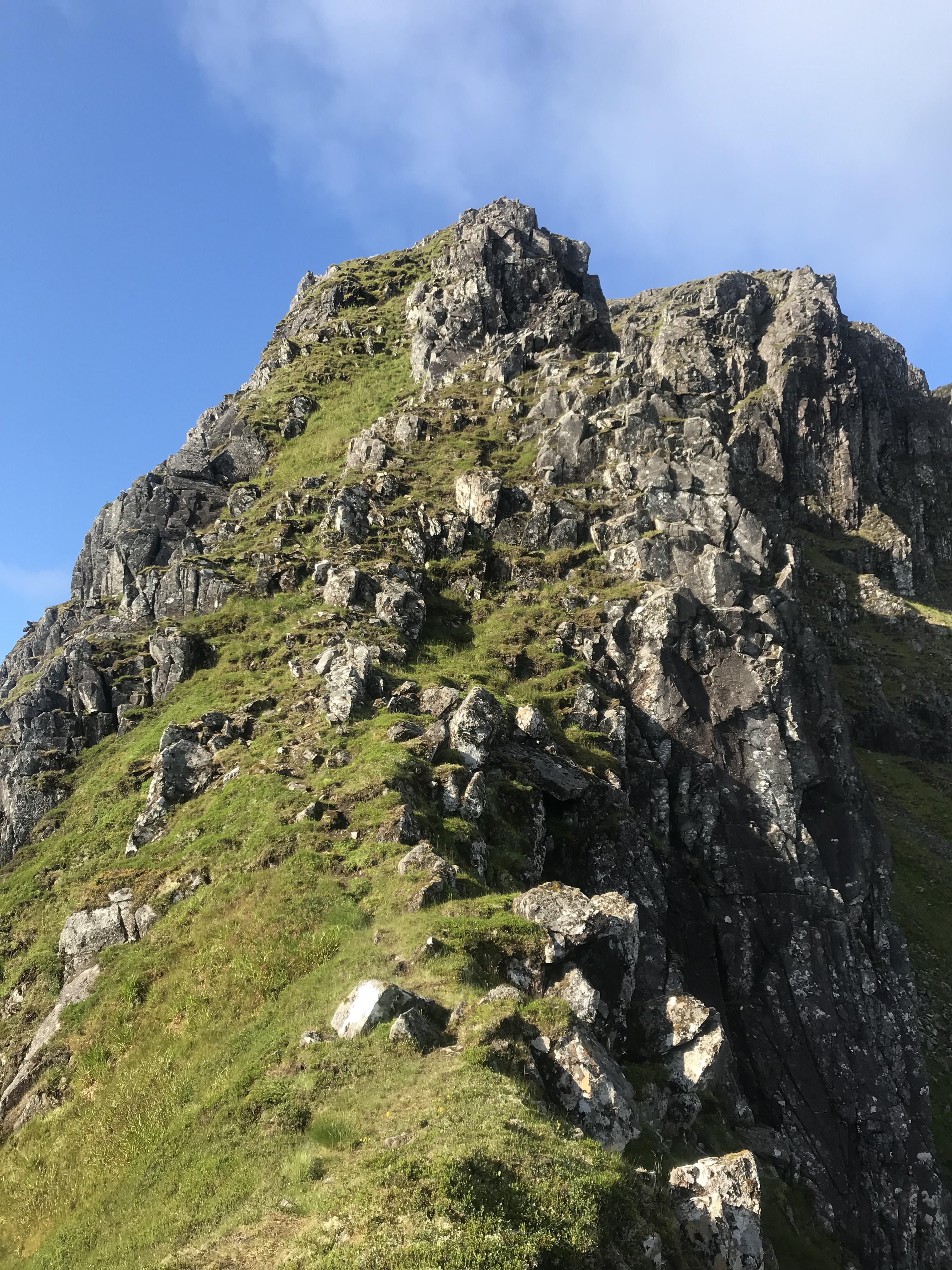 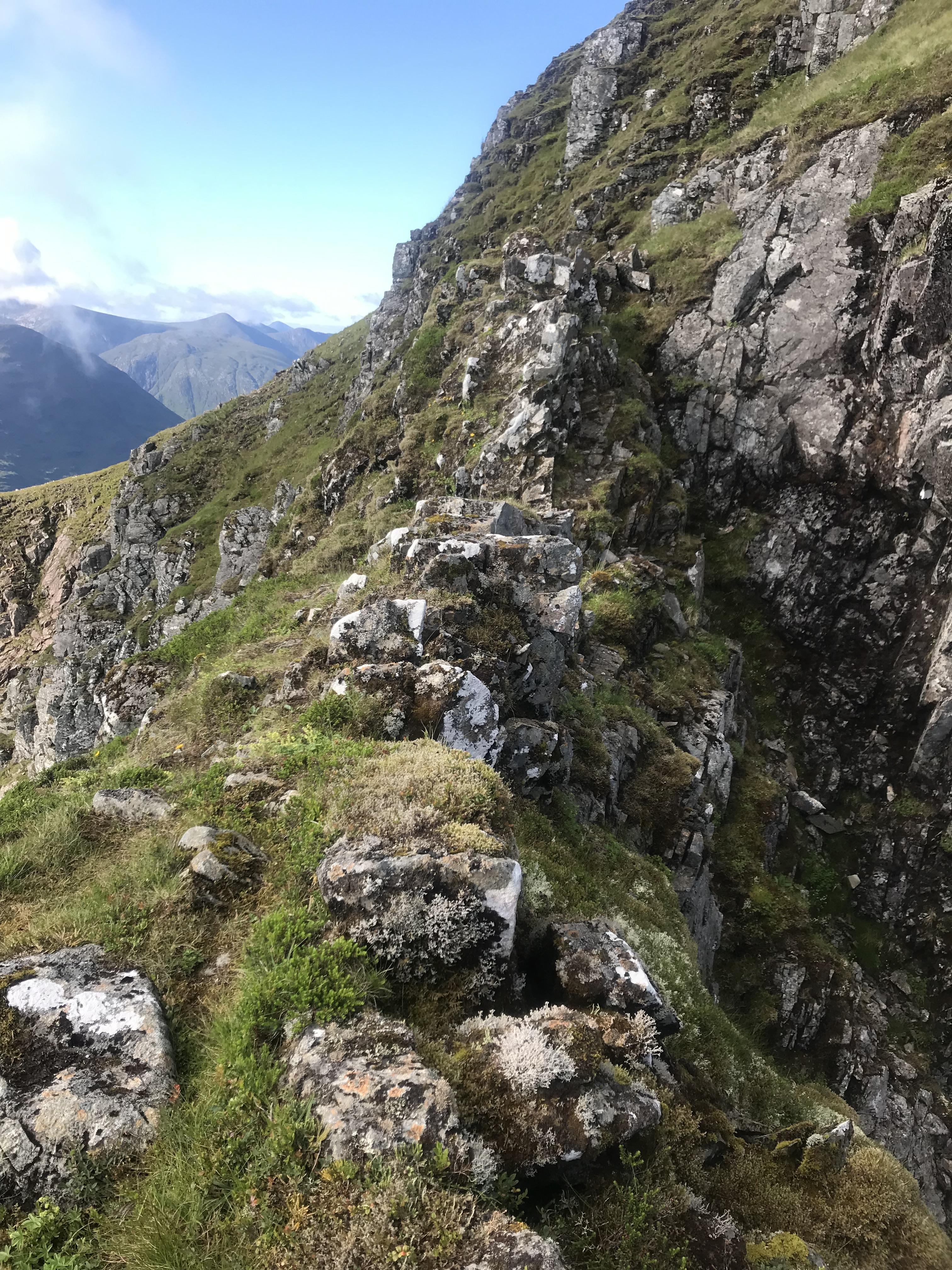 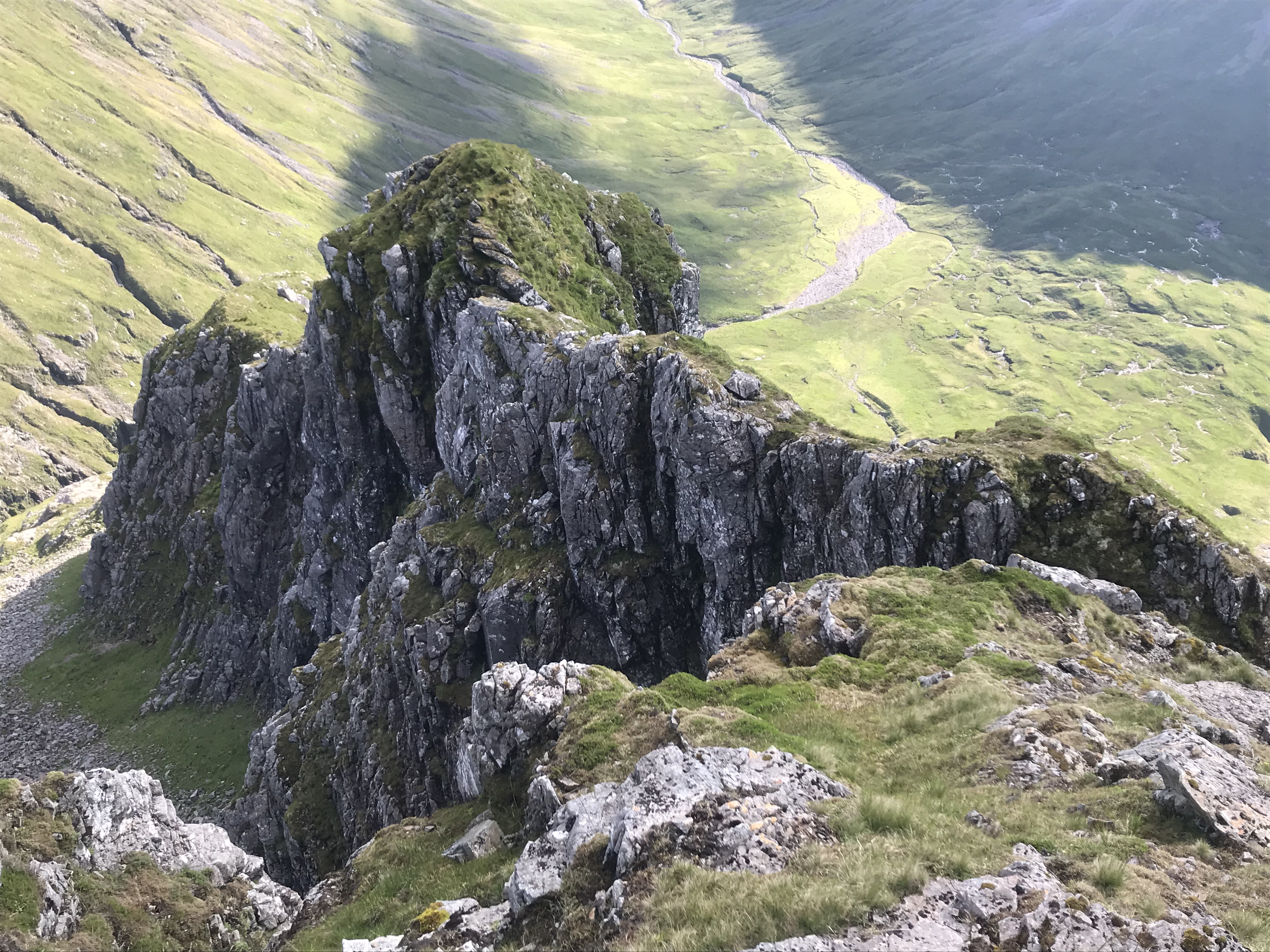 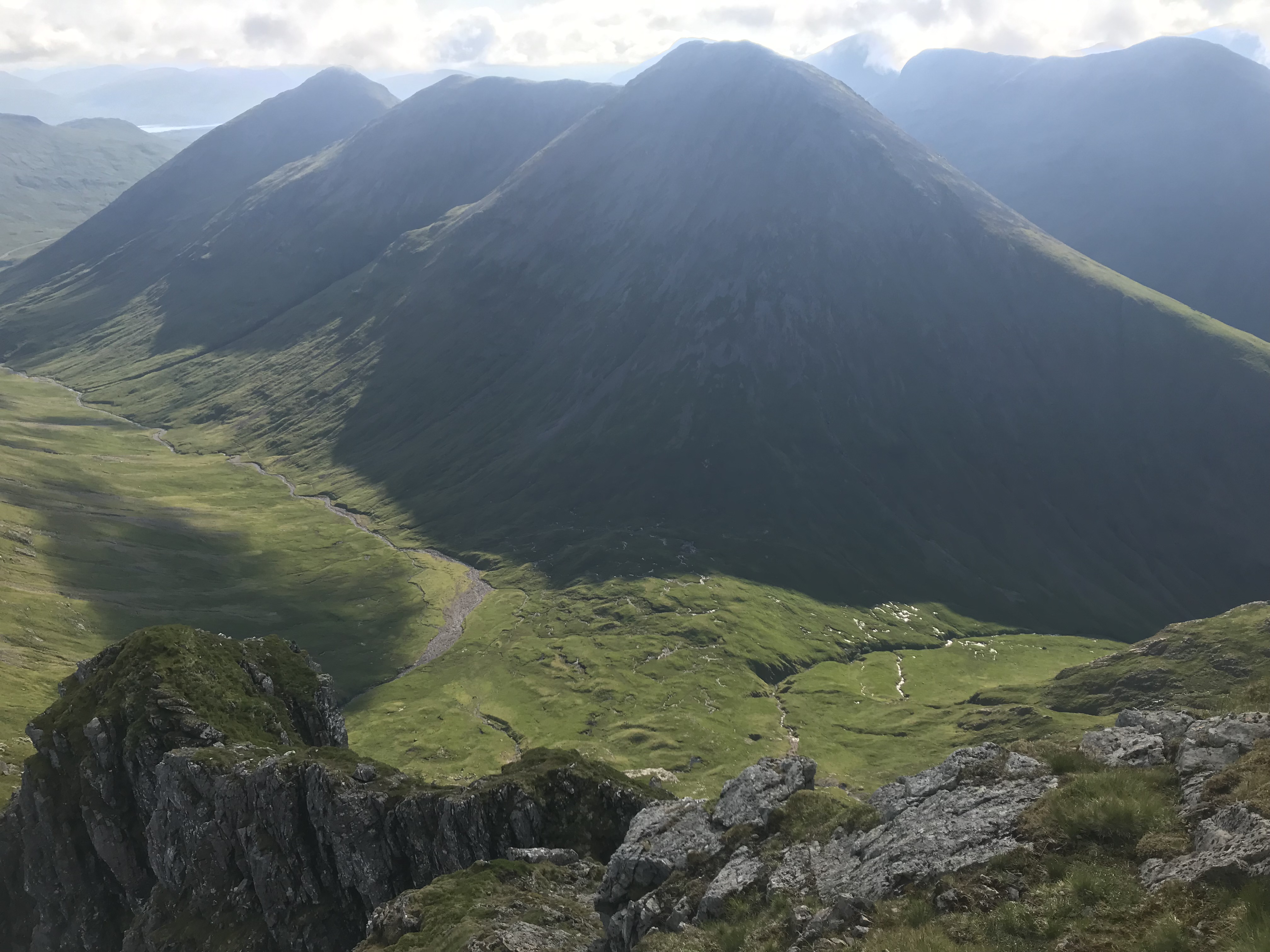 After summiting the Sron Na Lairig I then moved on to Stob Coire Sgreamhach gaining terrific views down into the Hidden Valley and further east to the Buachaille Etive Mor ridge which I'd so enjoyed traversing the evening before. I then continued along the main ridge of Bidean Nam Bian; onto the main summit and then on to Stob Coire Nam Beith. 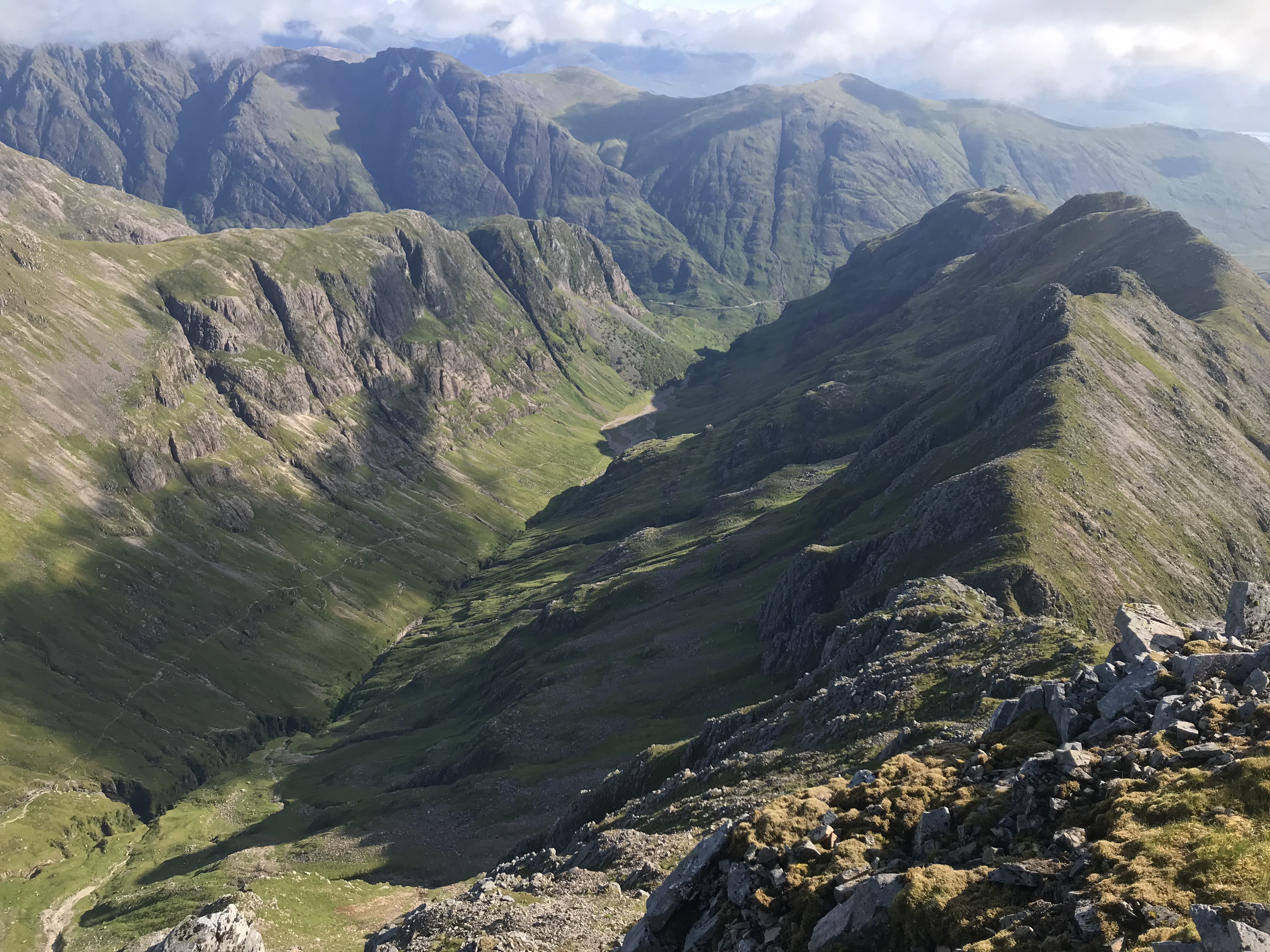 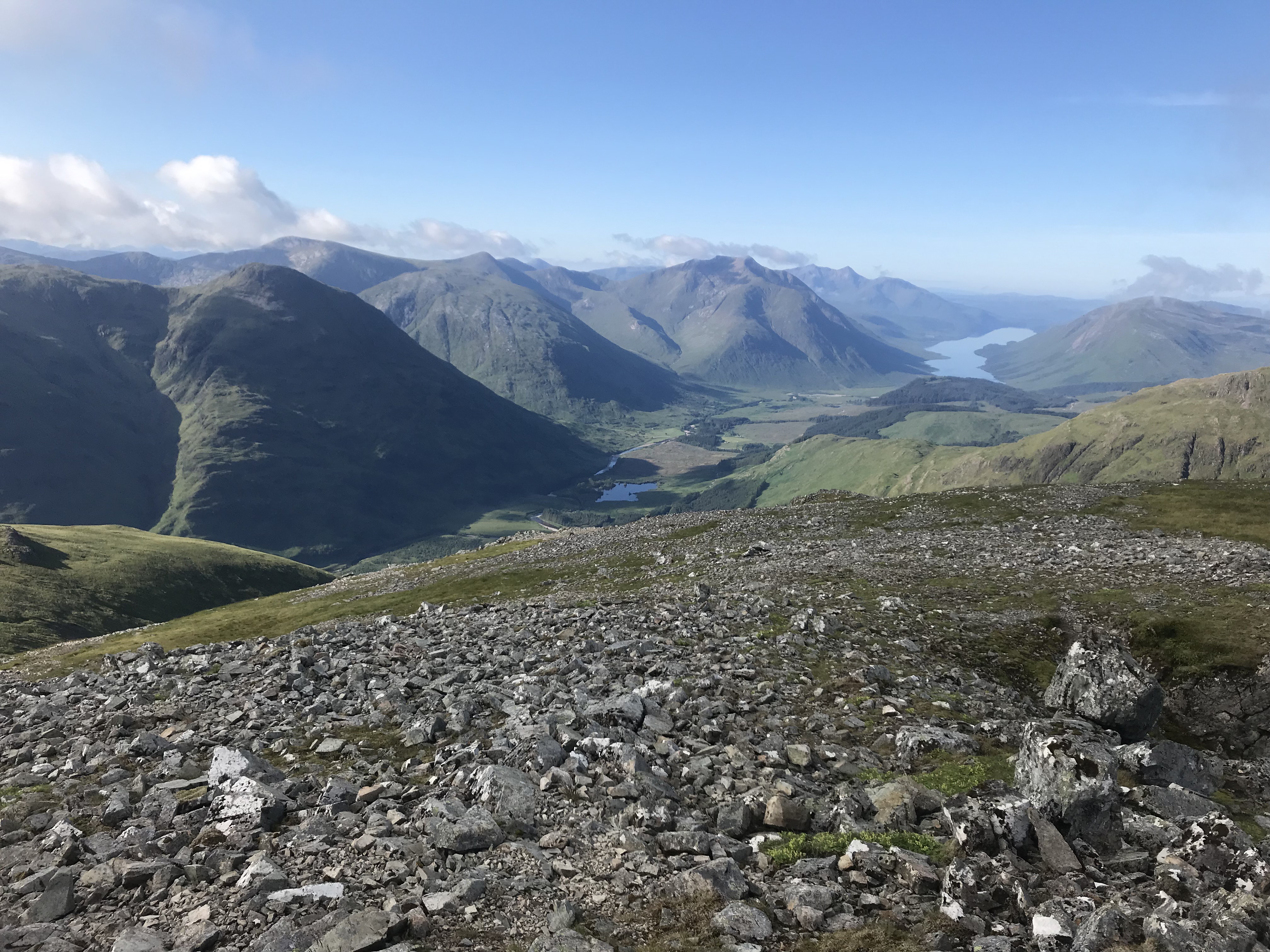 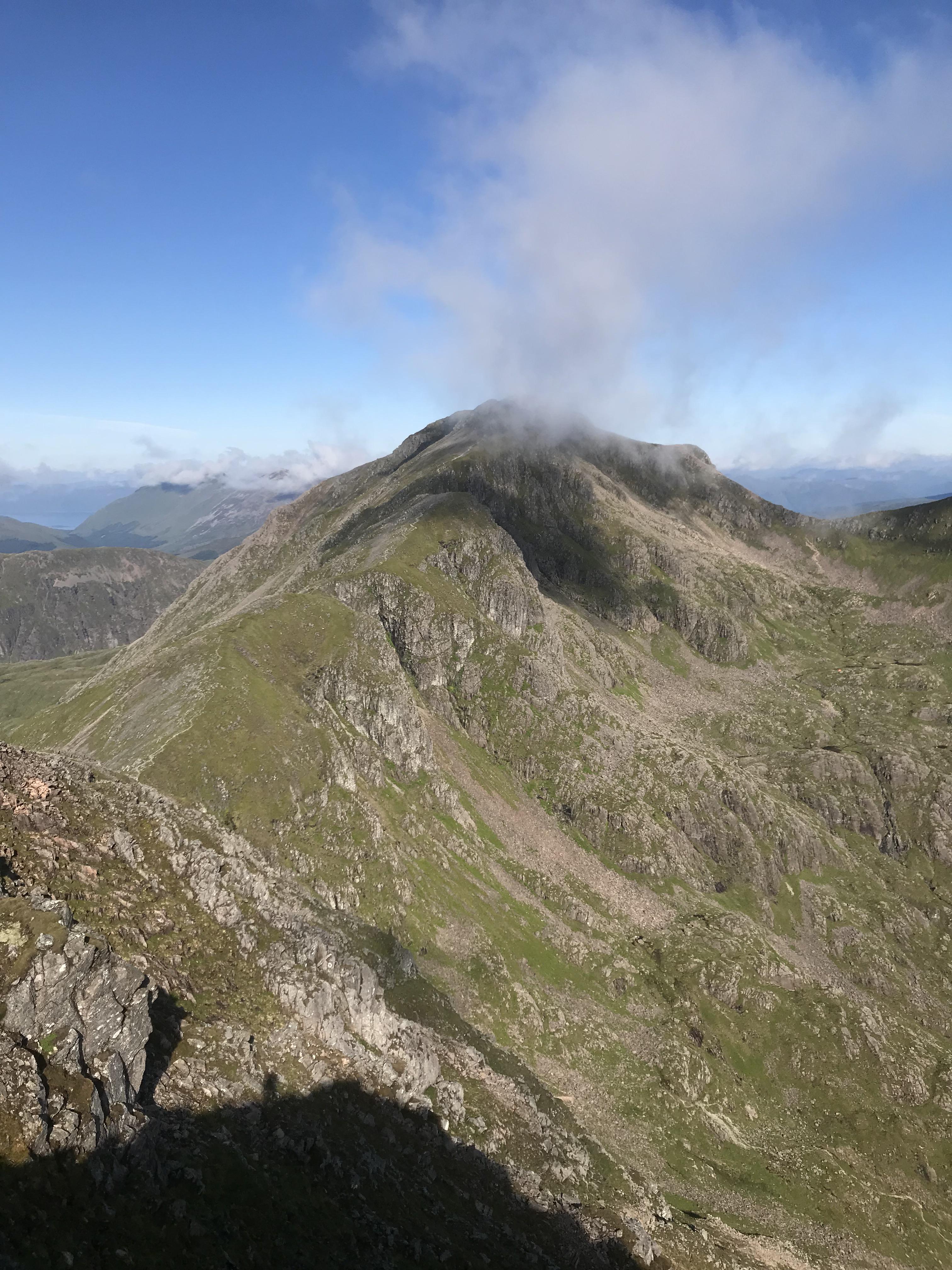 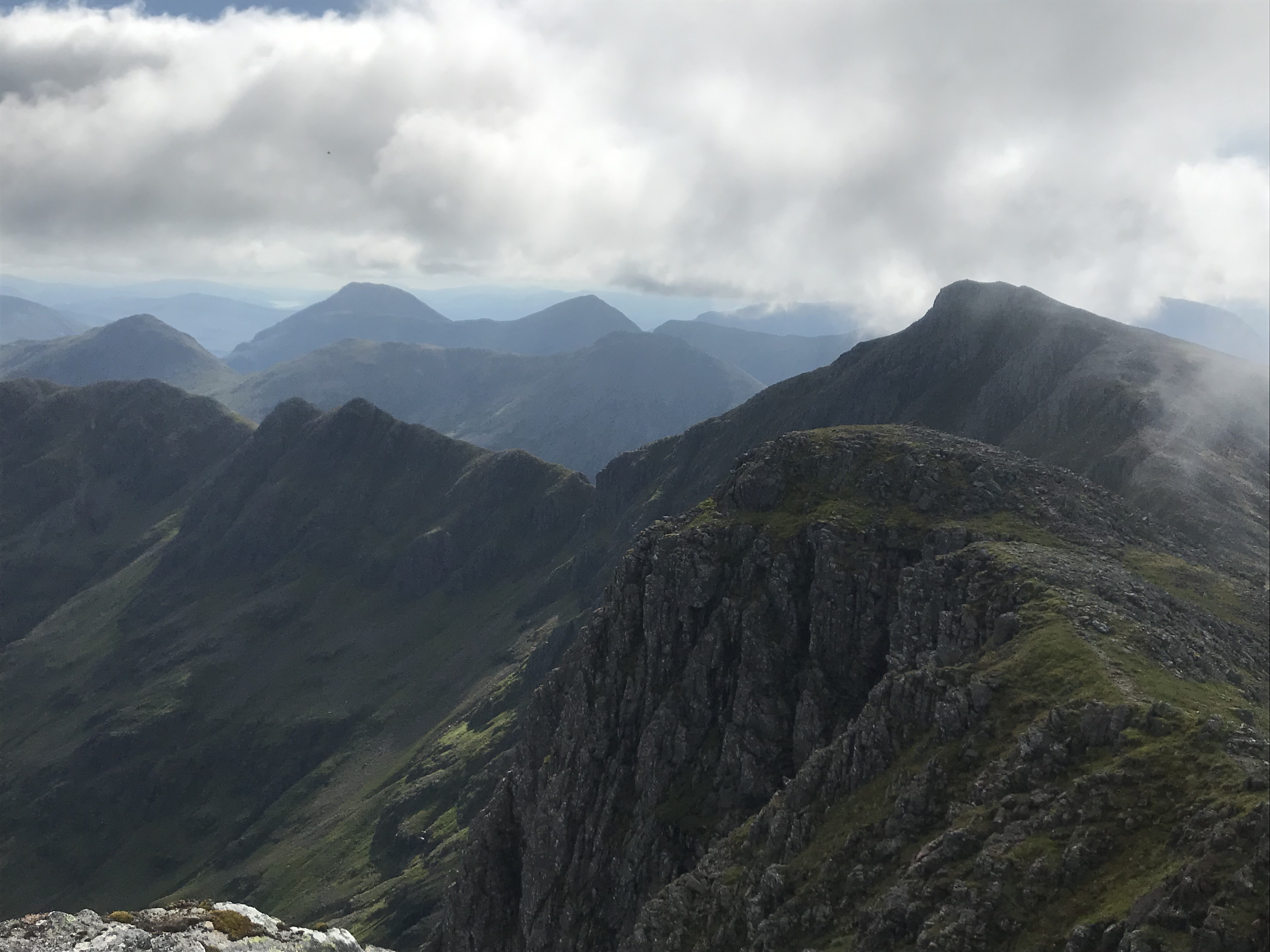 My final objective, which I think will be well understood by many, was to arrive and finish up in the Clachaig Inn for a nice lunch and a pint of something tasty! To get there I took a direct descent north off the north flank of Stob Coire Nam Beith, straight down to the A82. 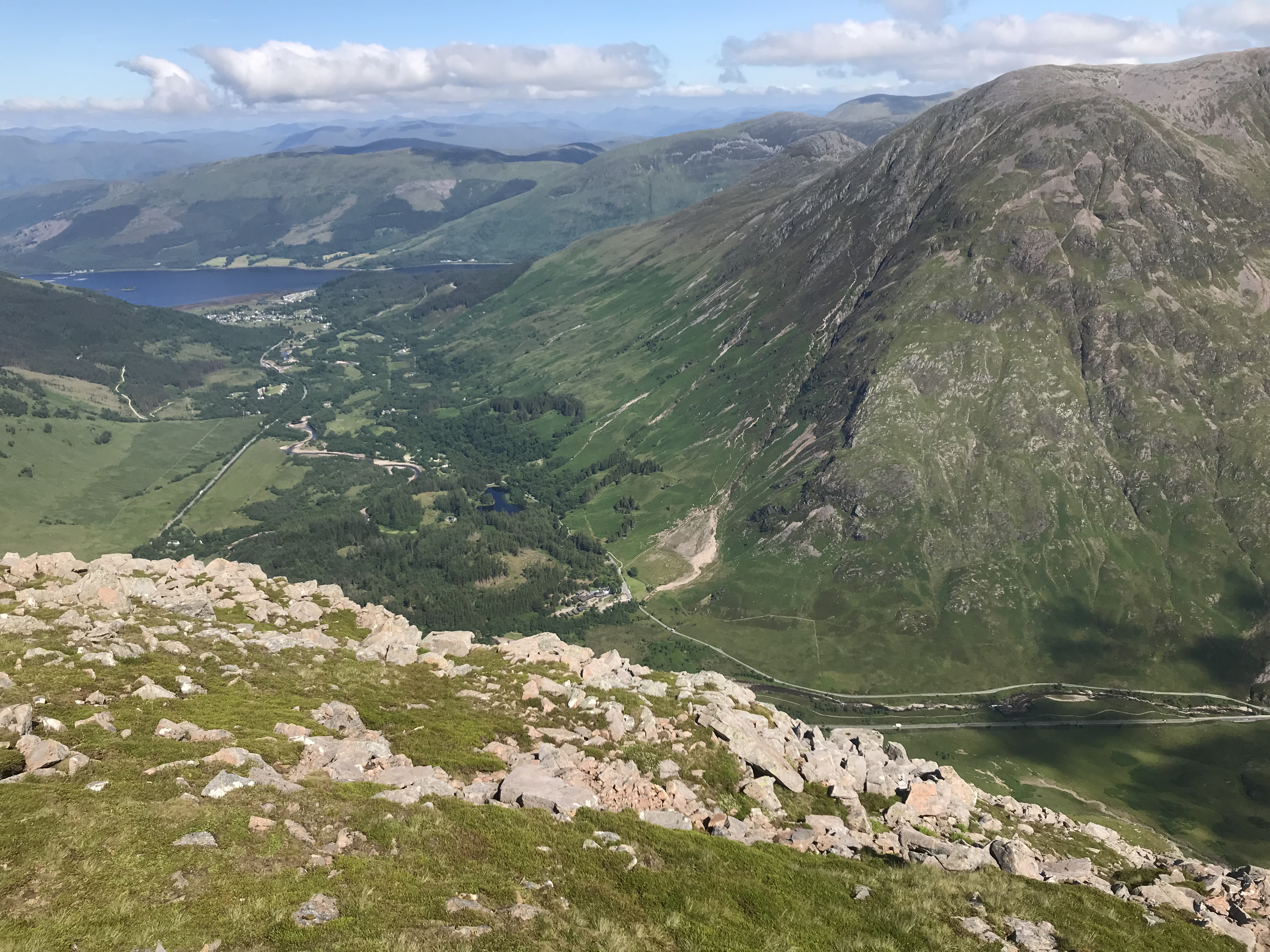 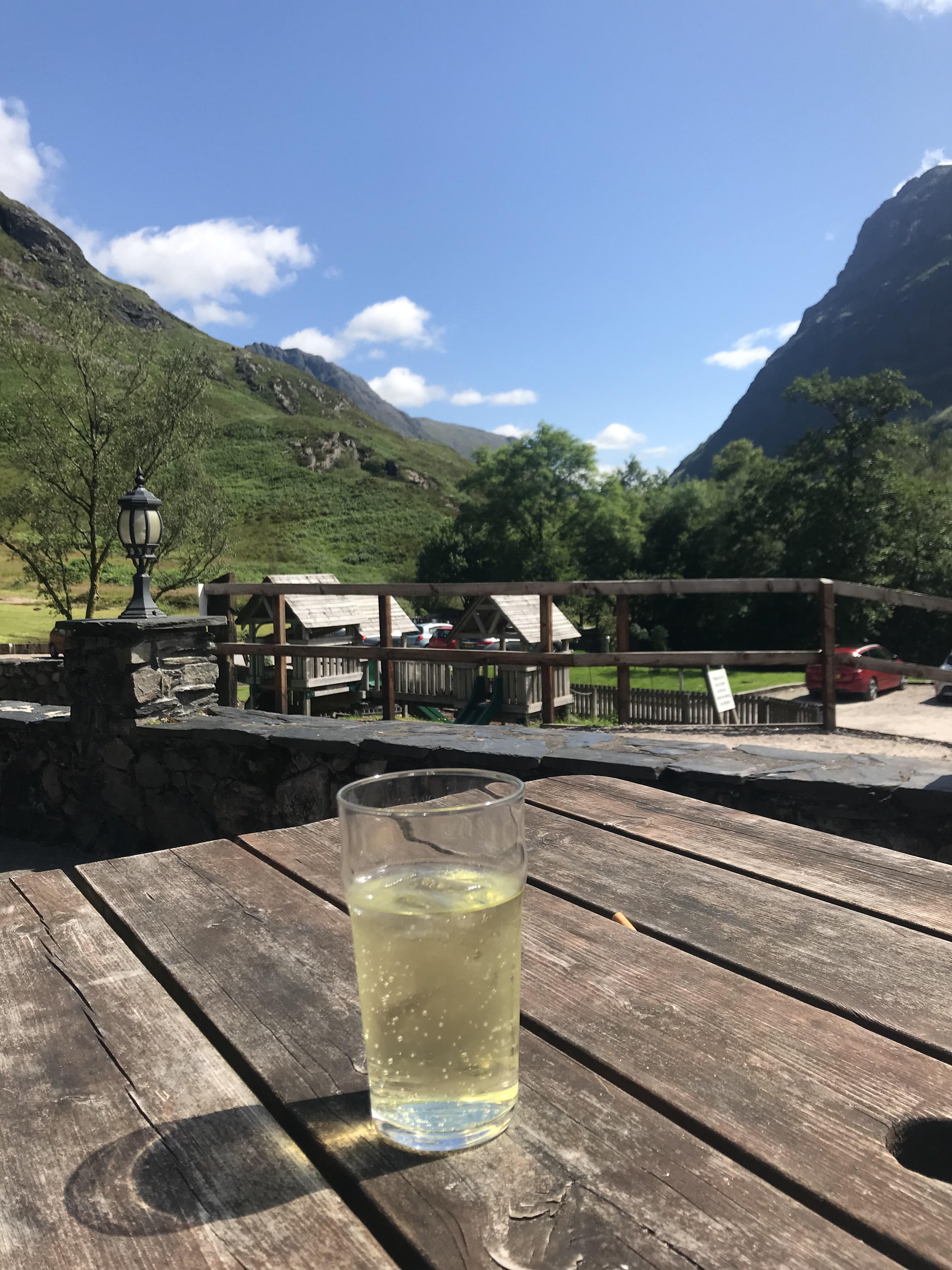 The whole trip was an absolutely wonderful experience a thrilling challenge and I think a greatly rewarding means of getting to understand Glencoe a little better. On reflection I'll probably try to carry a slightly lighter pack next time I do a similar route - perhaps with a summer sleeping bag rather than the winter suitable bag I took on this occasion.

A fun extra photo - my 'guidebook' notes for both Curved Ridge and Stob Na Lairig. It only just survived the trip!

Many thanks for reading
HappyHillGoer
Click to mark this as a great report. Register or Login free to be able to rate and comment on reports (as well as access 1:25000 mapping).