It's been a while since I did a trip report, but I noticed there was no report linked to the Beinn Bhuidhe route yet so thought I'd write this one up in case it helps others with route planning - it's a slight variation on the WH route.

Here's the map of our walk, done retrospectively from memory:

our_route.gpx Open full screen  NB: Walkhighlands is not responsible for the accuracy of gpx files in users posts
First of all, being in Knoydart Beinn Bhuidhe is an amazingly beautiful, complex mountain with stunning views. It could be tricky in mist as most of the time there's no path once you leave Gleann Meadail and it's not always easy to find the route. It's also a really long day, with lots of minor tops to go up and down. When I mapped it out I was really surprised that it was over 1400m in ascent - guess that's why it took us so long!

It was another hot, dry, sunny May the first time I came to Knoydart in 2008, but then and on subsequent trips I'd been focussed on the three Munros. On this trip, the hill targets were the three Corbetts, two of which I hadn't yet done - turned out to be such a good choice! For each walk Malc and I were the only ones on the mountain that day, the views were stupendous and we could take it nice and slowly so as not to overheat without worrying about running out of daylight.

It was already hot when we left the campsite at 9.00. We knew it wasn't going to be a quick day, but one to savour. 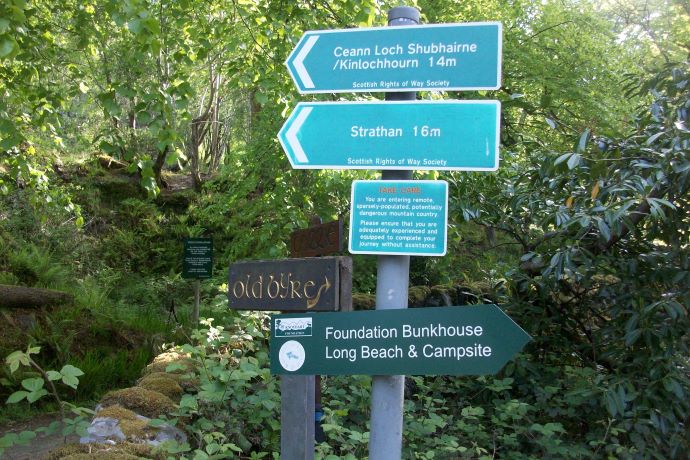 Inspiring signs at the start of the walk

We took the route signed for the old hilltracks to Strathan and Kinloch Hourn, up through some forestry works and past the monument to Lord Brocket before crossing the Inverie River then bearing right along the Allt Gleann Meadail. After an hour's walking we crossed the river and sat down for a while with our boots off and feet in the river, while a group passed us and started to head up to the ridge towards Meall Buidhe. It was such a lovely walk along the glen, on a good track which steadily gained height. 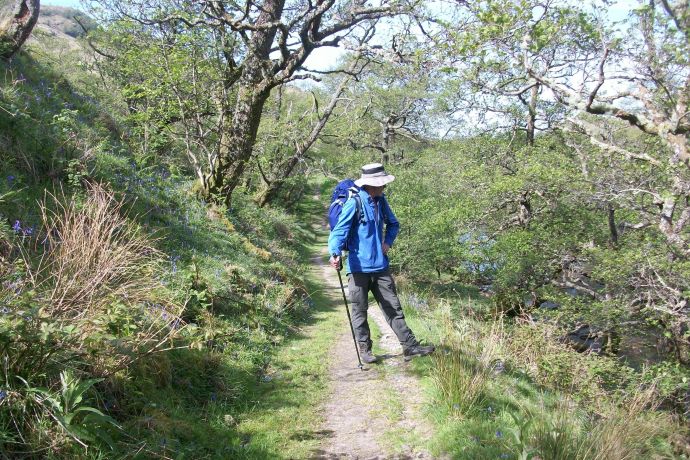 Malc enjoying the bluebell woodlands as we start up Gleann Meadail 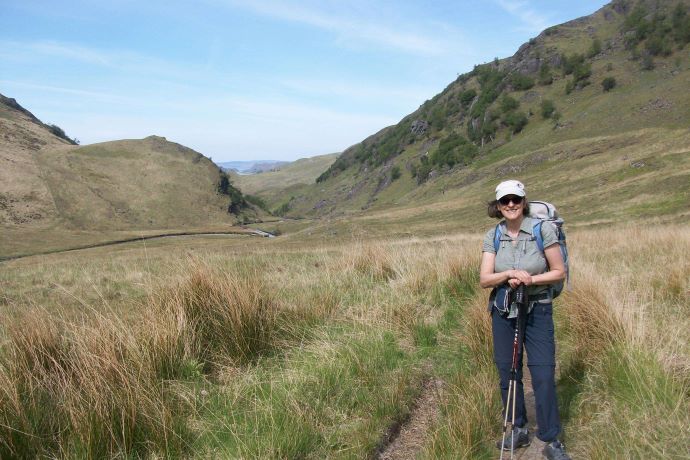 Taking a rest further up the glen

As we got higher we began to meet walkers coming in the opposite direction, some from Sourlies and others from Camusrory, walking to Inverie, and stopped to have a few chats. We had thought about heading up to reach the ridge at Mam Uchd, as in the WH route, but decided to carry on with the path to the pass as it seemed a more natural route and we had the time to do a longer walk.

Finally we arrived at the top of Mam Meadail at 12.15, and spent half an hour having lunch with our boots off to cool our feet down. The views were opening up of Sgurr na Ciche and Garbh Chioch Mhor, and down to the river Carnach. 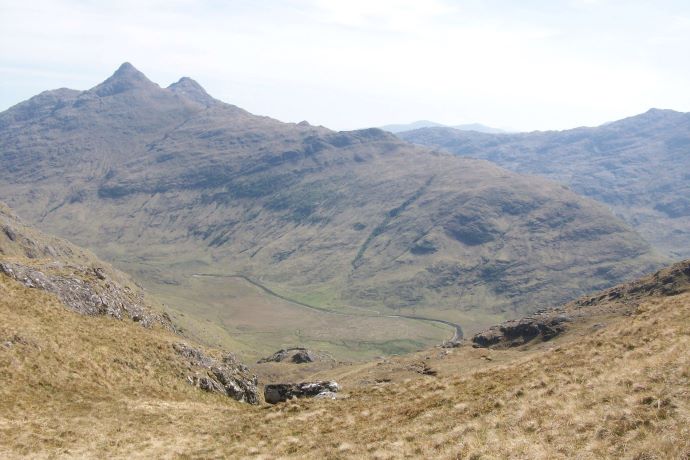 Heading up the ridge from Mam Meadail

I'd hoped that there'd be a nice cairn and a path heading to the right showing our route back along the ridge, but if there was we didn't see it. Having said that, there was no real difficulty and we slowly began the return trip, winding through rocky outcrops as the views down to Loch Nevis and back to Sourlies began to open up. First top on the ridge End of Loch Nevis, Sourlies bothy just out of sight

It was exceptionally dry underfoot which made it easier for walking but it didn't feel natural for the west coast! We probably took a less easy route around the top of Mam Uchd, bearing too far to the north and having to contour round so as not to lose any height. After that the peak of Sgurr an t- Sagairt looks rather tricky but we managed with care to pick our way around the south side. Summit at last - after 6 hours of walking


It was 3.00 when we finally reached the summit, 6 hours after setting off. I hadn't expected to be so slow, but actually it was really nice to stroll along and just enjoy the views on both sides. The route becomes much easier to find after the summit, a wide grassy ridge until finally at Sgurr Coire nan Gobhar you're looking down on the two lochs far below and Inverie beyond. Almost at the end of the ridge, Eigg and Rum in the haze ahead Almost there, looking down on the two lochs and Inverie, Skye beyond

We picked our way down, glad the steep grassy slopes and peat hags were so dry, arriving at the gap between the lochs around 4.30 where we had a good splash in the water - too shallow for a proper swim.

And then the last stretch down towards Kilchoan where we pondered how to get through the area around the houses without disturbing their residents or the deer grazing on the lawn - the most obvious route was just to walk right along the track and past the house to the bridge, but it didn't seem quite right so we took a rather convoluted route to keep out of the way.

Back at the tent for 6.30, glad to stop at last. It was a brilliant day, and a really wonderful mountain.
Click to mark this as a great report. Register or Login free to be able to rate and comment on reports (as well as access 1:25000 mapping).

Gairich, my 1st Munro this year, almost my last ever ...