Yay we can get back to the hills!
Having spent the Winter updating kit, going ultralight and planning trips, this was the first time I could get up to Scotland and the Bank Holiday gave a longer weekend.
The forecast was mixed but it looked like Sunday was a goer.
I'd done Beinn Tulaichean and Cruach Àrdrain on Saturday but as the weather looked better than forecast I decided to head over to Glen Lyon and walk in.
After some food I headed off up the track by the dam only to remember I forgot loo roll which would of put a bit of a downer on the trip!
A run to the car and back to where I left my pack was only a slight delay.
I was then met with the view up the loch. Very still, sunnier than it looks, no midges and no people!
Obviously things were very dry so I needed to find a burn on my ascent to the knoll just South of Creag Bhuidhe on the East ridge of Beinn Mhanach.
This gave an amazing view back down the loch. Evening light of the loch

The night was fairly cold though not inside my sleeping bag. A semi frozen Platypus (soft bottle not semi aquatic mammal!) in the morning and a dusting of snow.
After porridge and tea, I packed up and began the ascent of Beinn Mhanach. The hill had eluded me on a previous expedition to Chreachain and Achaladair. It was a fairly steady angle, ideal as a morning ascent and warm up.
With clear views inspiring me on it didn't take too long to reach the remote and desolate summit. Now I faced the worst bit of the day, the 600m descent straight down the Southern flank. Had to be done but at least I was looking out to the hills later in the day.
Just before the track I was greeted by two little chaps. I guess they'd been hand reared as there was no sign of mum. They kept head butting my legs and standing on my boots! Very cute. My original plan was to follow the track round a few miles and head up the shoulder of Meall Tionail (An Stuc) but decided I'd sacrifice the slightly easier angle for the saving in miles. I'd spotted a bit of an easier looking line going past Coire Chirdle but if was still a direct ascent up to the Tionail/Creag Mhòr col.
Sometimes direct is best and after a steep start it did ease a little with the route made easier by a lot of angled shelves to zig zag up.
Having made a couple of little friends earlier I hoped they would be okay when I came across a relative that hadn't made it..... Once onto the bealach I saw what lay ahead. Creag Mhòr was not too bad but the descent towards Beinn Heasgarnich and subsequent ascent was a bit more than I'd of liked!
Passing a few Ptarmigan I made my way to Creag Mhòr's rocky summit. A great viewpoint down to the Glen and of course over to Heasgarnich. A bit of refuelling and off I went.
The descent was made more fun by doing some cheeky glissading. Still plenty of snow patches around.
Once at the Bealach it didn't look Quite so gnarly and I spotted a little path which beaut made it's way up and through the rocks. I love these high level small, windy paths.
Eventually the path eases on the Bull's Nose. After which it mainly undulated for the kilometer or so to Beinn Heasgarnich's summit.
I was feeling it now. Over 1500m of ascent over mostly path less terrain was enough so soon after Lockdown.
The sun was shining through the cloud occasionally which always inspires that bit extra from you. The forecast suggested the weather deteriorated through the following morning so I thought I'd chance another night in the hills and head out early.
The shoulder down to Stob Garbh Leachtir was lovely underfoot. I skirted the edge of the Crags which were impressive. The coire looked incredible in the evening sun, a perfect backdrop to a camp.
I made my way towards the Allt, spotting a lovely flat ledge near a side stream. Perfect.
Dinner cooked whilst I put the tent up and unpacked. I'd earned something hot today!
It hadn't been windy at all but was still cold. There would have been a significant windchill if it had been blowing.
Allt Heasgarnich is quite ravineous (is that a word? I certainly felt similar earlier!) and it must have been completely full of snow this winter. It was still very deep in places but the unrelenting flow of the water was eroding its way through. 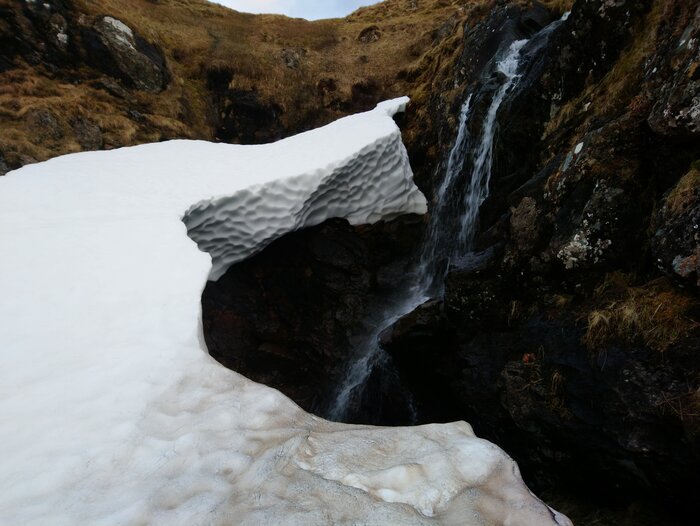 I awoke the following morning to the sound of light hail on the tent.
Had I overslept? Had the weather deteriorated sooner?
I stuck my head out to assess. Luckily only a shower but the skt was that heavy, forboding grey that you know is only going to get darker.
The summits were all in cloud so I just packed up quickly and made my way down the coire to the track. It was only 1½hrs back to the car so I'd have proper breakfast there.
An easy walk back by the loch with glances back to the now less inviting hills. Good Times though.
Click to mark this as a great report. Register or Login free to be able to rate and comment on reports (as well as access 1:25000 mapping).