Testing time in the Mamores: or bionic woman at large

If you're like me, different trips into the hills can have a range of different motives, from the simple 'getting a new blue balloon' right through to a deep love of being out in the Scottish mountains. As I get older a new one has crept in, 'Can I still do this?'

, and I suppose my testing time in the Mamores was just a variant of that

The story goes back to November 2019 when I suddenly lost the hearing in my left ear. There was already very little hearing in my right ear prior to that, so I was dispatched to the Scottish Cochlear Implant Centre to be assessed for an implant. Under normal (ie non Covid) conditions I would probably have had the operation by June 2020, but Covid dragged things on ... After a day out in the Fisherfields in June 2021 I returned home to find an email offering an implant 6 weeks later, at the end of July. Wow, I really didn't expect that, especially given the restrictions on non emergency operations. However I had a concern; I'd been warned that cochlear implants can cause balance problems and that hillwalking might be off the menu for sometime.

The operation went well, the healing process went so well that we even tried a friendly Corbett to see if I could manage back on the hills - nae bother, the balance seemed fine. So after 'switch on' and a further round of programming

we decided another experiment was called for, a bit more challenging one, the two Mamores which make up the southern part of the Ring of Steall. Yea, I know they are steep and the shortest route would involve some steep off piste descents, but I was careful and found some good stalkers' paths which would make ascent and descent longer but easier. As for the descent off Am Bodach going east well that would certainly test the balance


our_route.gpx Open full screen  NB: Walkhighlands is not responsible for the accuracy of gpx files in users posts
(OK I know we could have shortened the route but that would have put us on a track into Kinlochleven that we walked last year, after heavy rain had almost demolished it, and we weren't keen to see if it had been repaired.)

So en route for the north Highlands after my latest programming appointment, we booked a B&B in Kinlochleven (well convalescence has some advantages) and on a beautiful late summer day headed for the hills. The first part of the route followed the West Highland Way out of Kinlochleven. We chatted to a few hardy walkers before leaving the Way just west of the bridge over the Alt Corie na-Eirghe. We picked up a great stalkers path which lead us up to the main ridge. The morning was clear, the midges disciplined and the walkers happy.

View back to Kinlochleven 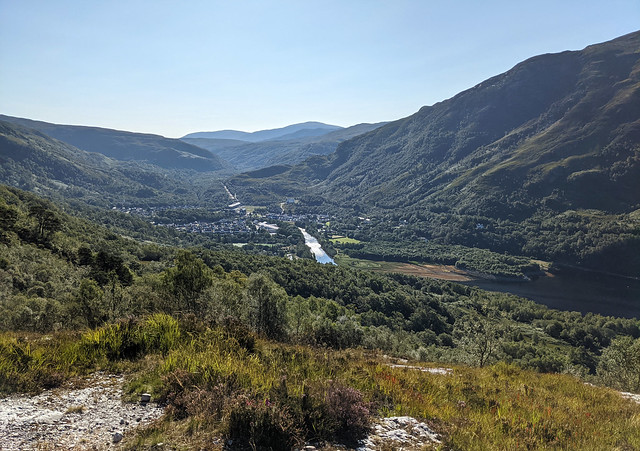 And west along Loch Leven 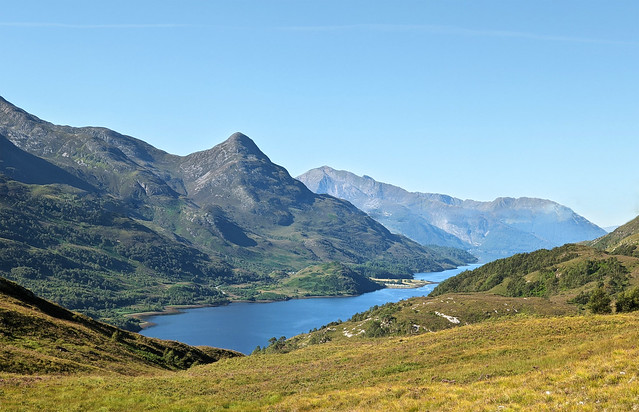 The WHW in the foreground with the Pap, Beinn a'Bheithir and Beinn na Caillich 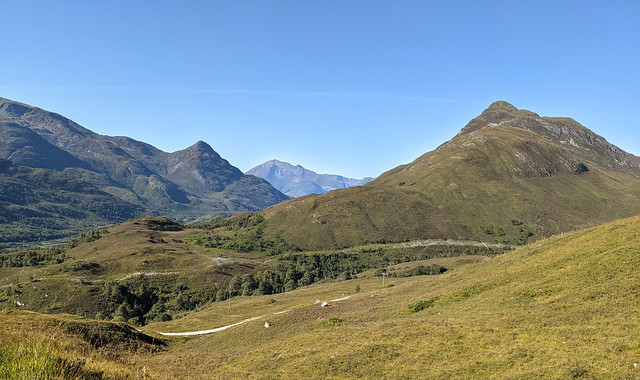 So far so good, as long as we went at my pace (just for a change 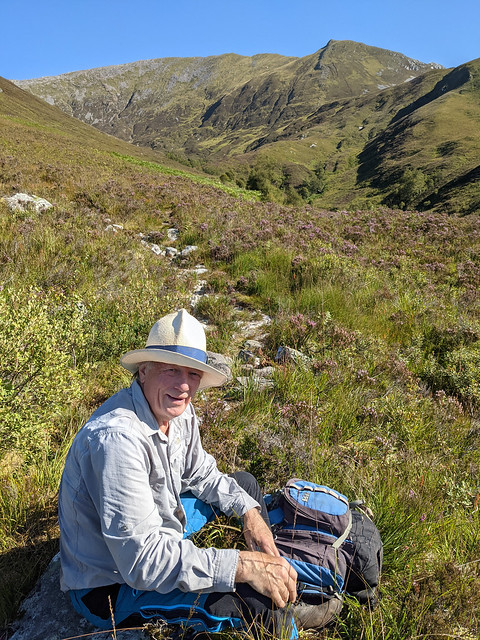 as well as 'Just let me get my breath back' stops - plenty of them as the route got steeper, but to be fair this was an eminently doable route up. On our old 50K OS maps the path doesn't go up to the ridge, but on the ground (and more recent maps) it does. There wasn't much water in the Alt Corie na-Eirghe but it would have filled bottles if necessary. 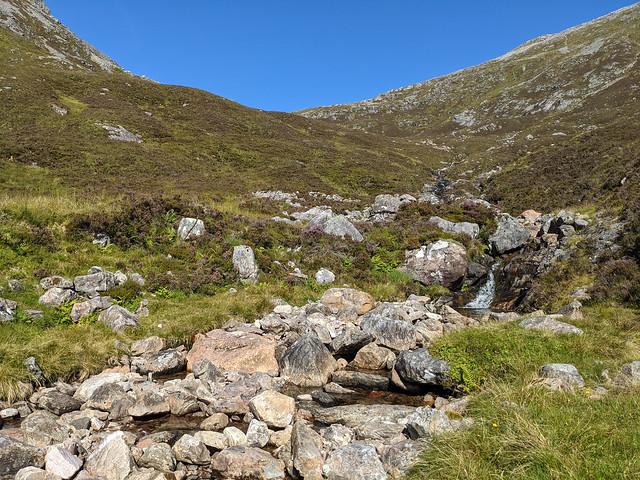 We could see that the route was coming out close to Sgurr an Iubhair and for a reckless moment I wondered about nipping up that too, just in case its status was ever changed back to Munro, but let's not be frivolous, this was serious testing time, was I fit enough to bag two Munros??

There are many times I've got to a point on a walk where I've been blown away by the view. It usually happenes on summits, sometimes I know the view will be amazing, but often the exhaustion of getting there meant I forgot

but this time I genuinely hadn't been prepared for such a fabulous view when we reached the ridge line. There was the Ring of Steall in all its glory. The ground fell away from us into the steep sided Corie a'Mhail, ringed with magnificent mountains. It was like standing on the edge of an extravagantly sculpted goblet, the late summer grass was burnt almost a dull gold in the sun; together the Mamores and the Ben Nevis range were just stunning. I took a video, and lots of photos but none of them can capture the breathless beauty, (but that doesn't mean I won't post a few photos - out of kindness

So left to right the view in front of us 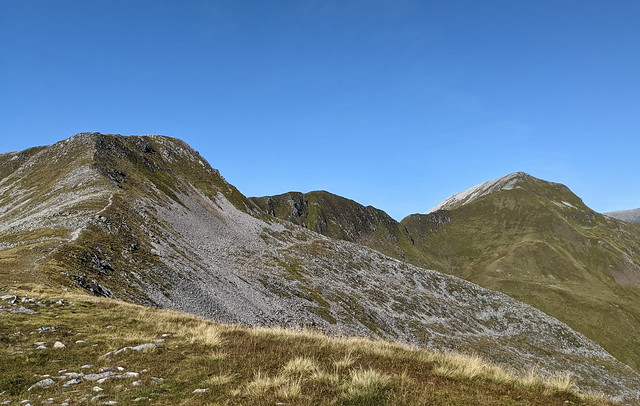 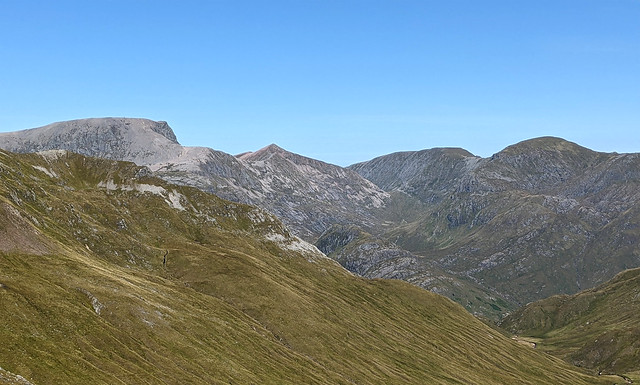 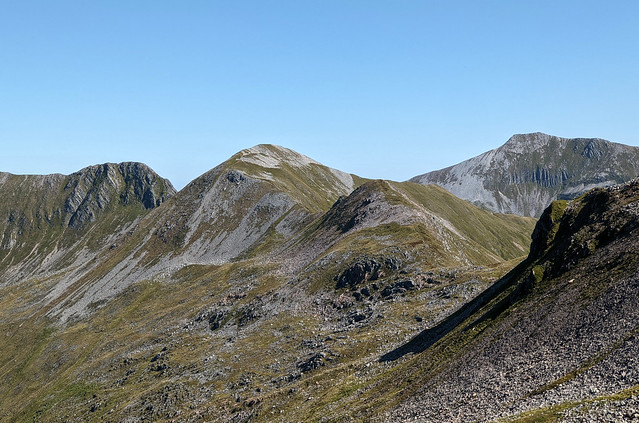 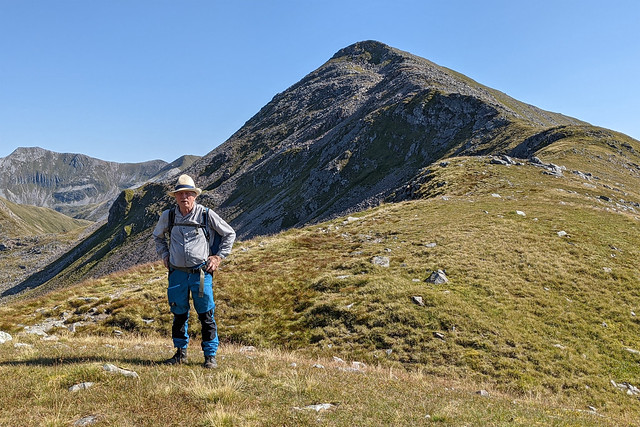 quite clearly delighted to be there. 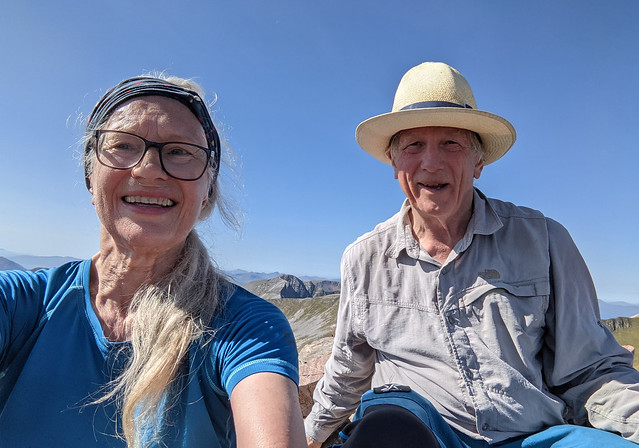 A restful lunch was followed by another photo shoot;

southwest to the Blackwater reservoir, with Schiehallion, the Lawers Range, Mamlorns and hills of Glen Orchy on the skyline

Loch Leven and the southwest, with Bidean nam Biam looking majestic in the centre 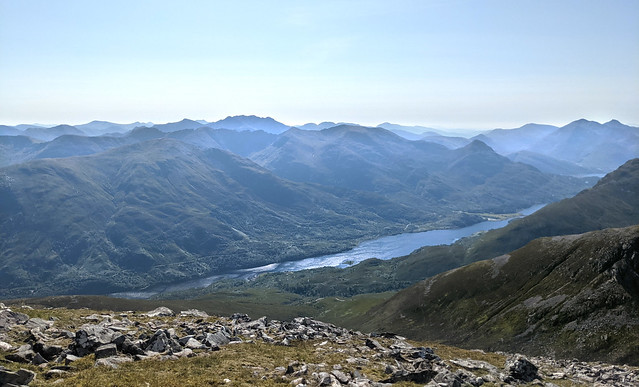 Stob Corie a'Chairn and Binnein Mor with the Grey Corries ,,, 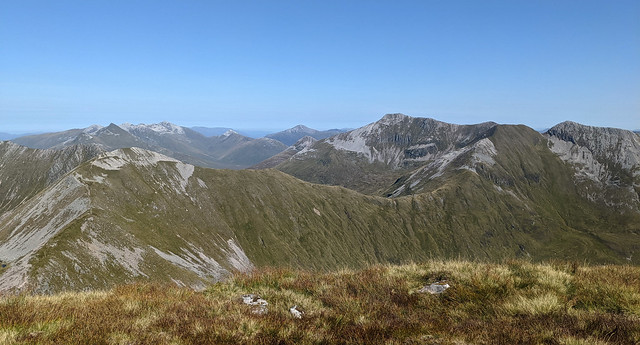 ... and zoomed to the Grey Corries 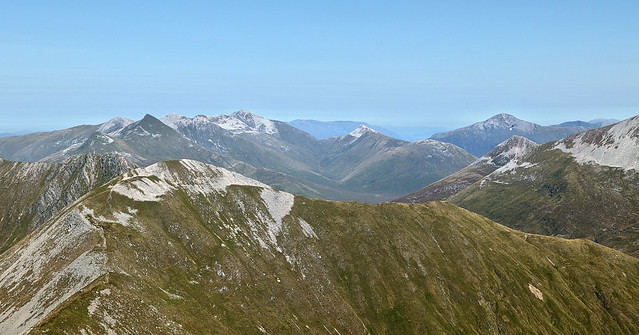 After a very leisurely session with the Old Man, it was time to go; the next section of the route would test my balance more seriously than the walk so far. The path down the east side of Am Bodach is both steep and eroded and care is need whether ascending or descending. Descending steep eroded slopes is not my greatest joy under the best of circumstances, but I have been known to go a bit faster than I did, but it wasn't too shabby either. On the route down we were passed by a runner

and met two people going in the opposite direction, the second one confirmed that our planned route off the hills was a really good stalkers path, impossible to miss!

Quick pause to take yet another photo of the Nevis Range ... 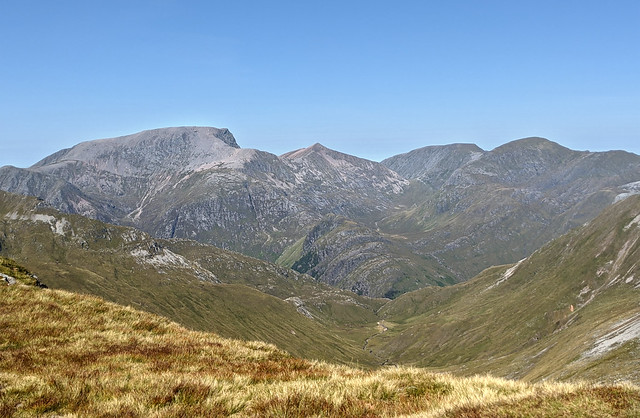 ... when I was presented with a test of a very different type.

It can take anywhere between 9 months and two years to fully adapt to the sounds produced by a cochlear implant and a few days earlier I was able to detect but not recognise a small plane flying overhead. So when i heard a mechanical sound in the sky and recognised it as a helicopter I was childishly delighted, I struggled to stop myself jumping up and down like an ecstatic toddler. "Its a helicopter, its a helicopter ... wow". And wow indeed. We spent a long unscheduled stop watching it flying over the Devil's Ridge and Sgurr a'Mhaim, first searching and then hovering above the summit of Sgurr a'Mhaim ...

Helicopter (just visible) starting its search above the Devil's Ridge

Hovering above the summit of Sgurr a'Mhaim 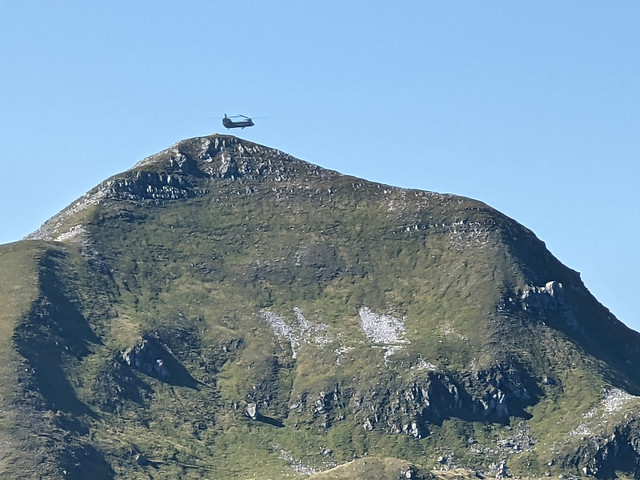 ... before it flew down to search Corie a'Mhail, where we saw if pause and (possibly) make contact with a person on the ground. 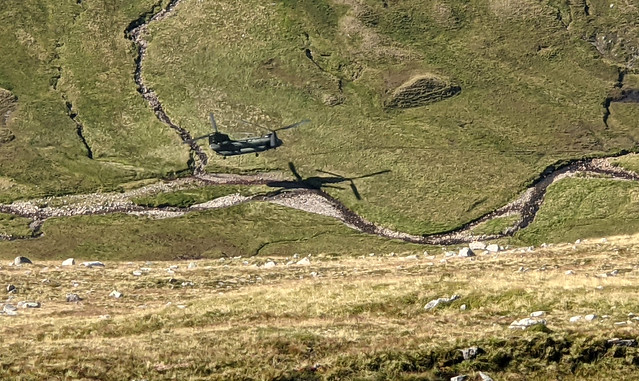 From our vantage point, too far away, we couldn't tell if it was a rescue (we didn't see anyone lifted into the chopper) or a training exercise. Neither did we know if it was military, civilian or a joint exercise. However it made fascinating watching, full of admiration for the skills of the pilot and their ability to hug the mountain sides as they search round the corrie. And very grateful for the spontaneous hearing test

But back to the lovely ridge walk between Am Bodach and Stob Corie a'Chairn, its very easy walking with wonderful views to the east. The sun had shifted round westwards while we had enjoyed the flying spectacle, so when we looked back at the route down Am Bodach it's silhouetted and not easy to pick out.

Am Bodach in the afternoon 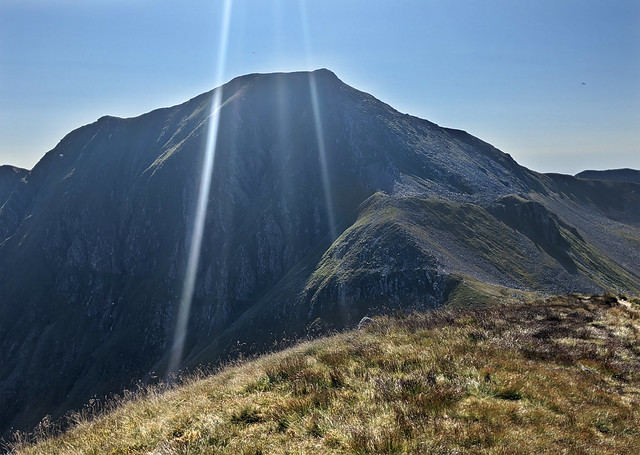 A gentle stroll over to Stob Corie a'Chairn 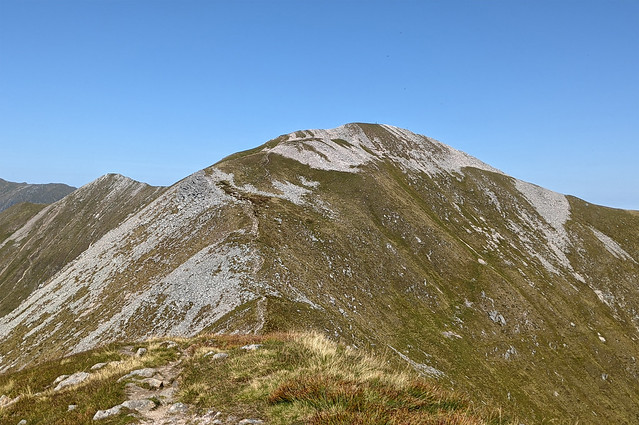 The route up An Garbhanach and on to An Gearanach 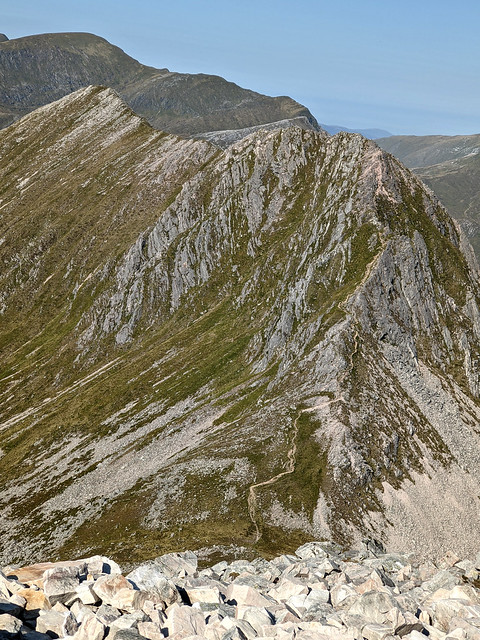 Instead we enjoyed a leisurely refuel and soaked up the joy of being in the hills, and managed a few more snaps.

Looking back over our route from the west 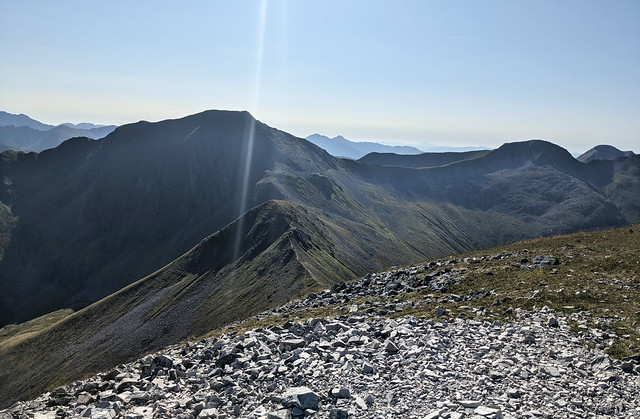 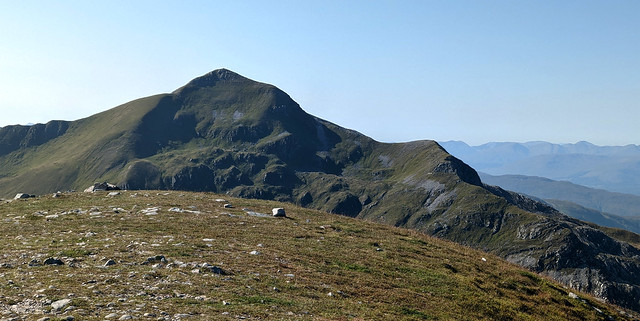 An Garbhanach and An Gearanach backed by the Nevis Range 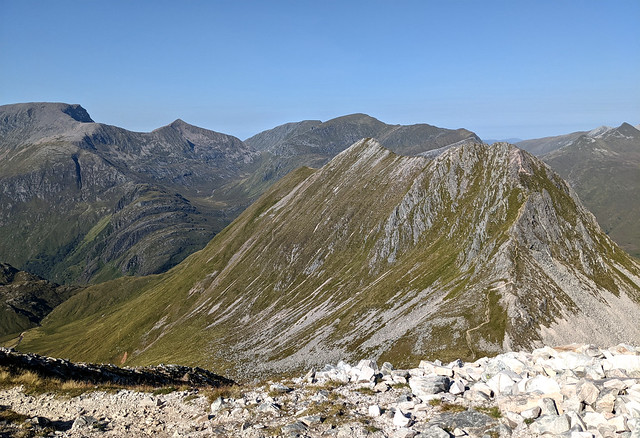 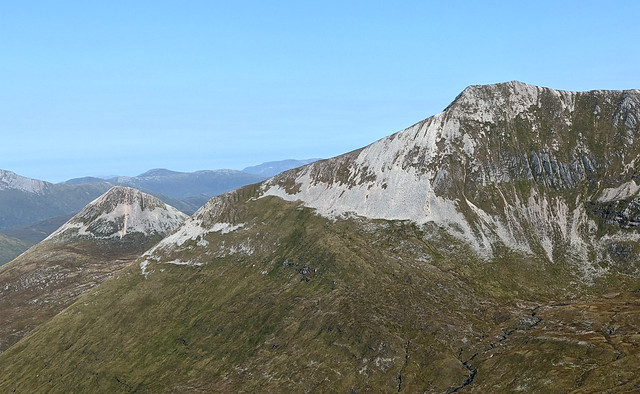 I finally put the phone away and we took the south east ridge off Stob Corie a'Chairn, looking for the lowest point of the bealach where we expected to find the path heading down into Corie na Ba. Our informant was right, it's easy to spot with the cairn of white stones marking the path just off to the right. We followed the path as it wove its way around the corrie, past a pretty small lochan; not the shortest route by any means, but a very gentle one. At this point in my convalescence we thought that the was the most appropriate thing to do. We did enjoy being out in the hills on a wonderful, peaceful afternoon. Perhaps because the path into the Steall meadows was closed for repair we had seen very few people on this trip and had had summits to ourselves, just what I needed. Ok, I was hot and tired when we got back to Kinlochleven, but a change of clothes, a beer and a meal soon sorted that, and for the next three days I was on a high as a result of this test in the Mamores.

But most important, a massive THANK YOU to all the NHS staff at Crosshouse Hospital and the Scottish Cochlear Implant Centre - you're truly amazing and I am honoured to be having this procedure in the midst of a pandemic

Sgurr Ban: when peaks aren't the most enjoyable part

On the third bell we all chimed

Ben Nevis and the first snows of winter

Not so grey on an autumn day Sgurr Choinnich Mor

Coast to coast : dawn to dusk