Route: Tinto from the north

The forecast looked excellent and there were beautiful blue skies in West Lothian, so we were up and away early. We were really looking forward to Tinto Hill and hoping to bag our second Graham. Mmm, didn't get very far south and a dense mist came down. It really wasn't looking good for the walk when we arrived at the car park, but we remained hopeful the fog would lift or we'd get above it. The path was wide and easy to follow. You really can't go wrong on the route. There were a few muddy bits and a few slippy icy and frosty bits, but largely it was good, solid and frozen ground on the way up.

We soon started to get above the fog, and it was starting to be really special. Getting up above the fog On the wide path with fog below

After about half an hour we saw a cairn ahead and were a bit confused, surely we weren't at the top already ? And wasn't the cairn meant to be very large ? As we got closer we realised, no we really weren't anywhere near the top ! There was a long, steep way to go, but the small cairn to the left of the main track made a nice little diversion. On we went. It got more icy and steeper further up and we mainly stuck to the verges of the main path, trying to find a less slippy surface than the ice or the scree. It was though getting very warm, with the sun out and the effort involved. Soon we got our first glimpse of the true summit and the remains of the massive Bronze Age cairn. 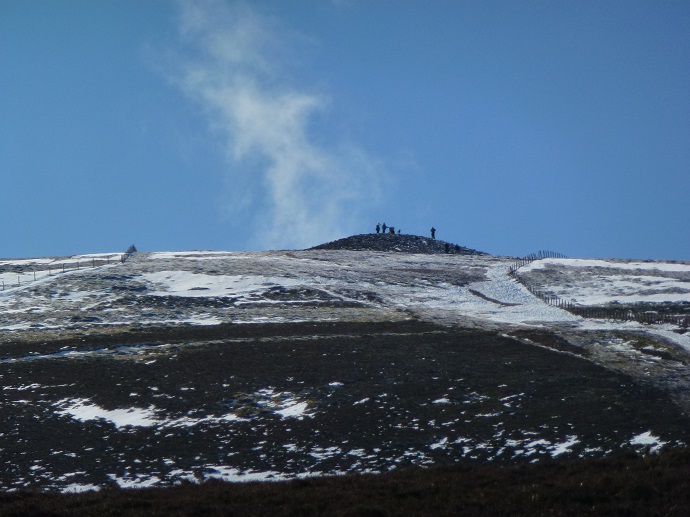 The summit and cairn

Being quite keen on archaeology, I was delighted to see this. I wonder how big it was originally, and how many people were involved in its construction ? Clambering down the cairn Toposcope at the top of the cairn

After taking some snaps, we had a snack in one of the many little wind shelters round the base of the cairn. It was reasonably busy at the top when we arrived, but then most people departed and we had a good long spell enjoying the fantastic all-round views in the sun with only another couple around. View to the Pentlands (zoomed)

Before descending, we nipped over the loose wire fence to the trig point and what looked like the remains of another much smaller cairn. After this, we headed back down. It was getting quite busy by now, lots of dog walkers and families too. The sun had also melted some of that ice in the ground and it was becoming really boggy in bits. I don't like mud...there might have been some bad language.

There's a hillfort quite close to the carpark, just to the left of the main path as you head up the hill. In the fog we hadn't noticed it but as we descended the rings were very visible, so we visited this on the way back down. The ditches and banks were very defined and it's well worth a quick look if you're on this walk. Standing on one of the hillfort's banks

We were soon back at the carpark. There were a few spaces left but it had obviously been very busy, with many cars parked along the lane leading to the carpark.

We then drove over to find Mendick Hill. A small ambition for the year is to complete all of the Pentland Marilyns and I'd only recently realised this outlier was actually in the Pentland range. We had a look and decided to leave it for another day. It looked a nice hill but I wasn't sure I could manage it on top of the Graham we'd already bagged. Still, something to look forward to another day !

The walk up Tinto Hill wasn't in itself anything special, but the views and the archaeology plus the inversions we had made it a truly memorable outing.
Click to mark this as a great report. Register or Login free to be able to rate and comment on reports (as well as access 1:25000 mapping).