The Start!(My beloved stayed at home)


The initial plan was to start from Drumnadrochit, however after forgetting my bike axle at home decided to return to Cannich to begin instead. (Also due to previous reports that segment was largely forest road and would have tired out the dog a bit too much)

We therefore began our trek up the hill from the picturesque village of Cannich at the beginning of a forestry road.
The route initially is quiet and perhaps a bit dull for hikers at a slower pace.There is also some illegal dumping of rubbish and lorry tyres along the way which is v sad to see. 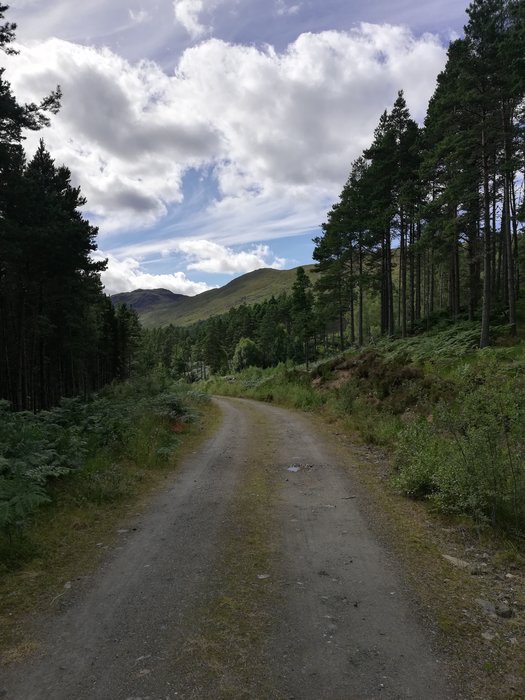 After a while there is signage for the Affric Kintail trail leading down a narrow path through the forest, a nice bit of fun downhill on the mtn bike with lots of twists and turns.
The bottom of this path leads to a road opposite dog falls, which was v busy with day trippers and Campervans.

After a very brief stop we continued across the footbridge and began the transit through Glen Affric.

The route around dog falls is a circular and seems v popular with many families and couples out enjoying the magnificent scenery.

After a long hill up, the reward is the stunning views of the Glen and all to come yet. Once passed the "End of way marked trail" sign the route gets much quieter and continues this trend the further west we got.
As the afternoon pushed on I was glad of the bike as midge's soon started to appear... 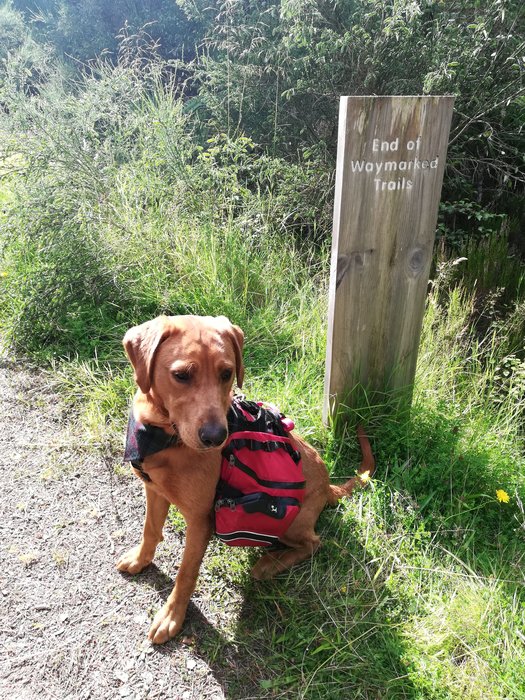 The scenery all along this route is stunning, with glimpses of the Loch below through the forest that occasionally open up to reveal its beauty in full sight. The going so far is good with solid terrain for a mountain bike with hardly any obstacles.(bar the odd gate)and the quickest ground covered for the duration of the trip We met 2 people hiking along this way, wild camping nearby and 2 others returning after a munro hike.(the lady suggested a dog trailer for Fionn, I don't think he would agree!)

The route continues all the way passed Loch Affric until it meets the river by Athnamulloch bothy and crosses a footbridge north near strawberry cottage. Here we met a few mtn bikers who warned us about the imminent swarms of midges further up..I thought I was well prepared with my repellant and face net.

The track from here gets a lot rougher and is more like a quad bike track with frequent obstacles and mix of terrain.I pushed the bike quite a bit up the steeper trails with lots of loose stone about. We pressed on and decided to call it a day after about 4km this way, a bit short of the youth hostel. The moment we stopped we were ambushed by swarms of midges. Definitely the worst I've experienced.Setting up camp took that bit longer as I was getting bitten so much.They were like clouds around us.
Finally we retreated into the tent and unfortunately couldnt enjoy the sunset and the scenery as much.There was so many outside that it sounded like it was raining lightly as they landed and took off from the tent!

The next morning did not offer much respite with tons of the buggers still about, though the tent was half covered in dead ones from the night before!

I packed up asap and decided on breakfast further up where a bit of wind would hopefully find relief.

Off we went and shorty came across Altbeithe youth hostel, unfortunately closed due to covid.
The "quad bike"trail soon finishes shortly after this and a rocky path takes form from here.

After about 40min of biking up hills the wind finally met us and we had a v relaxed breakfast by a stream.The sun was out, the bellies full and spirits on the rise as the terrain became more difficult .

Soon after we arrived at Camban bothy, a notice on the door said closed as per current MBA guidelines.We didn't meet a soul along the way so I guess would have been a lot busier any other year. The biking is very tough from here with lots of pushing the bike up steep rocky ground and even down in some parts.This is the most remote of the terrain and I took care to mitigate myself falling off as I was alone and without phone signal(for some time now)

while taking it all in. Fionn (the dog) was constantly racing ahead on the trail to check it all out ,he was just as eager! A big descent met us once past the waterfall and from here downhill most of the way to the lowlands.
Once at the bottom, Fionn had to be clipped in as there is quite a few sheep and livestock from here on.
From Glenlicht house the trail now becomes a 4x4 road and follows the softer landscape along the crystal clear river Croe to Morvich. 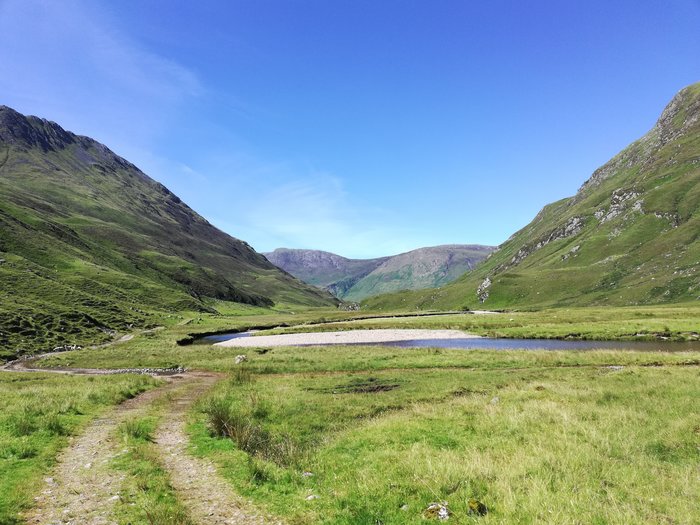 We reached Morvich after about 5 hours from our start point.

With lots of time to spare I decided to head north to Eileen Donan castle from here.

The road also has a footpath beside it from the A87(very busy road) all the way past Inverinate.
From there a grassy verge and we decided to take a single track road which parallels the A87 up toward Kepoch.
This is a big hill but the views of Loch Duich and the glens beyond are fantastic.

The last part of our journey was a big downhill with elevated views of Eileen Donan castle and the sun setting behind.

A pint in the Dornie hotel(dog friendly)sealed the deal and a gentle walk around the castle before a lift home.

A fantastic trip ill have to repeat! Notes on the bike:

Most of my equipment was strapped on to the frame using bungee chords, velcro straps and chord(including water in a hydration pack) This worked well though occasionally I would have to re adjust after a bumpy descent.
I tried to make my backpack as light as possible as this really reduces backache and fatigue.
No punctures throughput though I did pop a spoke.


Notes on the dog:

Fionn is a one year old Labrador and has loads of energy.I cycled at a pace that would not tire him excessively, especially during the heat.
There is plenty streams, rivers etc along the route where we stopped for him to drink and cool off.
The midge's also got to him, so he had to join me in the tent.Thankfully not covered in mud!

He carried a pack which contained his own food and treats for 2-3days.

The only livestock we saw enroute was from Glenlicht house on, there is lots of sheep in particular here wandering about in the open so a lead is required there.
Click to mark this as a great report. Register or Login free to be able to rate and comment on reports (as well as access 1:25000 mapping).